15 of the Funniest Reader Comments 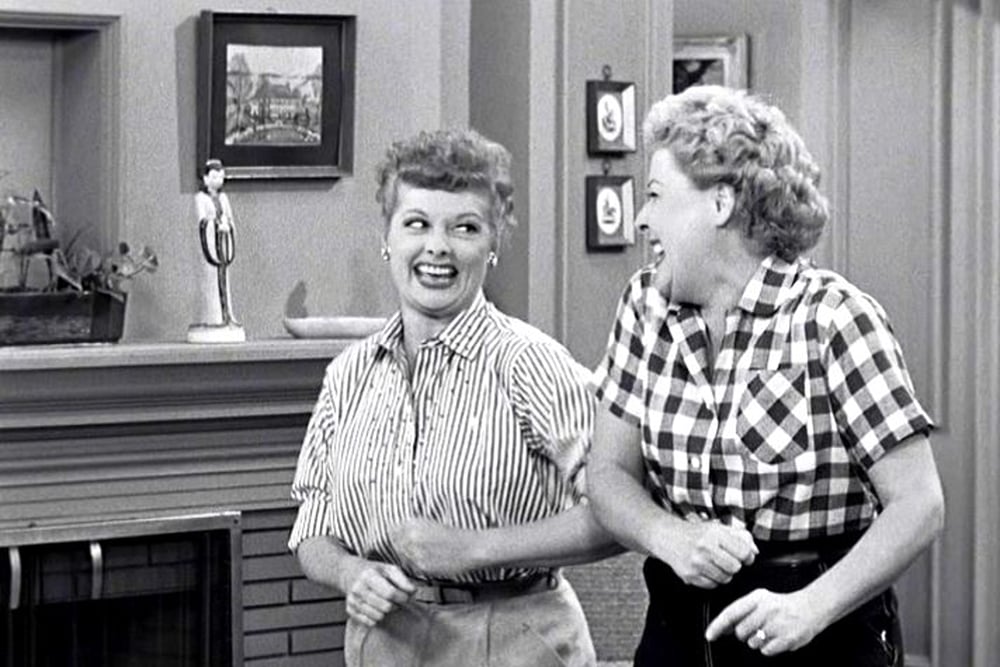 One of the best parts of working on Cup of Jo is reading the wonderful and wise comments section. Whether we tackle serious topics like grief and mental illness or lighthearted things like simple pleasures and tongue twisters, Cup of Jo readers always know what to say. Here are 15 hilarious comments from the past year that cracked us up…

“The best greeting card I have ever seen read the following:
‘Loving this concept!’
– God, creating dogs
I think about this and laugh out loud at least once a day.” — Calla

“Sometimes I tell my three-year-old about all the places he traveled when he was in my tummy. The other day we were talking about something in the past, and he simply asked if he was, ‘in or out.’” — Elizabeth

“Last weekend my boyfriend’s son asked me about my Fitbit, ‘Does it tell you how many days you have left to live?'” — Millie

“My three-year-old couldn’t remember the word ‘chin’ the other day, so he said, ‘the ceiling of your neck.'” — Jennifer

“I *HATE* the, ‘Got any plans this evening?’ go-to of checkout persons everywhere. It’s Tuesday night at 7 p.m. and I’m at Whole Foods; I’m not heading to a rager afterwards.” — Meredith

“This is how things go at a restaurant:
Server: Enjoy your entree!
Me: (reflexively) You too!
Guess I’ll go die now…” — Ellie

“I was a late bloomer, and my first boyfriend wanted to make my first kiss memorable. One night, he invited our friends over for a movie night. His family had a small orchard, and as it was getting dark, he said he wanted to show me something. We walked outside, stood in the orchard shivering for a bit, and he snapped his fingers. Suddenly the trees lit up with white fairy lights and I Can Love You Like That by All-4-One started playing. I stared at him wide-eyed as he invited me to slow dance. We awkwardly shuffled around the orchard, and he asked me if I’d go to the homecoming dance with him. I said I’d have to check with my parents! That apparently didn’t kill the mood, though, because he announced that he was going to give me my first kiss. It was a little sloppy, but I thought it was fine – until all our friends emerged from the darkness, applauding! Apparently his finger-snapping had been a cue to them to plug in the lights and turn on the boombox, and instead of skedaddling after, they stuck around and watched our first kiss. Mortifying. But I can’t say he didn’t make it memorable.” — Michaela

On things in your bag:

“On the way home from the hospital with my first baby, I dropped my bag and a tampon rolled out. My husband was like, ‘YOU HAVEN’T CLEANED OUT YOUR BAG IN NINE MONTHS?'” — Gemma

“My husband does not clear his throat when he has a frog in it. He carries on talking in this phlegm-y Dalek voice. He screws lids on jars so tight I have a heart attack trying to open them, brought on by physical exertion and RRRAAAGE. Does not chew his food, but he chews soup and I can hear his teeth gnashing the liquid. BUT! He always always leaves the toilet seat down and for that, I forgive him for everything.” — Caucus

“My husband does this thing when he sleeps called a ‘salmon flip.’ He’ll be on his side facing one way, and then, while asleep, he will launch into the air, and flip so that he lands facing the other way. The first time this happened, I thought there was an earthquake. It wakes me up every time. But he doesn’t even wake up!” — Jill

“Whenever I run, I’m reminded of this tweet by @rebeccamix:

“I read an obituary once that said at the end, ‘In lieu of flowers, please return your shopping carts to the store don’t leave them all over the parking lot. That drove Larry crazy and it was his one wish for humanity.'” — S. Carson

…Plus, so many cute moments!!!
Linsey on Samin Nosrat’s beauty uniform: “*In Chandler Bing voice* Could she BE any more charming??”
Hali on Cup of Jo gift guides: “COJ GGs! IT’S THE MOST WONDERFUL TIME OF THE YEAR! *twirls*”
Cherri on what’s your hobby?: “Existential dread.”

Thank you, as always, for reading. xoxo

Tags: reader comments
176 COMMENTS
WRITE A COMMENT
Relationships
most popular
01
Seeing My Body With Fresh Eyes
02
11 Wedding Dos and Don’ts
03
How to Write a Condolence Note
04
On Sexual Harassment
05
How to Be a Better Listener
Subscribe
Login
176 Comments
Inline Feedbacks
View all comments
Marisol

I remember reading that comment about the obituary when it was first posted, and I just want to say that Larry has haunted me in the grocery store parking lot ever since. I will never be able to leave my cart behind again.

And clearly I should have read through the comments before adding my own, because it seems Larry made an impression on many of us. DO IT FOR LARRY! :)

Me too. Never, ever.

@Katie Jameson – parenting in the age of fear – so true. This is why one of the best parenting tips is to park your car next to the cart corral, NOT next to the front of the store!

LOL’d and ugly cried at the same time reading these. Thank you for allowing comments on your site because CupofJo comments are seriously the best!!!

Thank you so much COJ team and all the women readers who make this site, my shelter in the storm. Its been a tough day, and am glad I stopped by. been grinning reading the post and the comments and then grinning cos I caught myself grinning.
Getting back to work, with shoulders squared and “ceiling of my neck” up!

Ever since I read the thing about Larry I have NOT been able to leave a cart behind. At a busy day at Costco I might have even picked up a few strays and returned them. All for Larry. Gets me every. damn. time.

Me too!! I just do it and love the thought of doing it for Larry.

Love these laughs! I just got a journal in hopes of capturing my son’s adorable lingo. Most recently he felt sick and explained that his “tummy liquids hurted”. I’m definitely making tummy liquids a thing! (Thank heavens those liquids stayed put)

Been putting away my carts (allllll the way to the store) just for Larry for months!

This is amazing!!!! I’m laying in bed mildly sick with my sick kid and this made me feel 100 times better!!! The salmon flip, the shopping carts wish, and the “existential dread” are winners in my book!

OMG my husband does that same weird moaning thing while brushing his teeth and it grosses me out so much! What is that?!?

My husband moans while he is in the shower. It drives me bananas. I’ve asked him to stop and he just can’t. I don’t get it and it makes me crazy.

I have to admit, I’m guilty of doing this: people who I’ve called will return a call and introduce themselves, after which I immediately call them by a different name.

I can’t stop laughing over this one :D

That bit about the tampon still has me laughing. I can totally relate!

The comment on small talk at Whole Foods had me! so true!

Omg, does anybody could help to decide what is more funny – the man flipping salmon or the abundance of men flipping while slipping (in the comments)?

I am dying over salmon flip!!!!
Here’s one for you…My 5-year old while watching Polar Express… “Mommy, what is the naughty list?” Me: “It’s a list when children have bad behavior.” Son in the sweetest voice: “You mean for kids that say “Shut the F@#$ up” or “Son of a B*&^%?”” Me deep breathing and keeping a poker face while Grandparents’ chins hit the floor…”umm, yes”. Son…”Phew, it’s a good thing I don’t say that or I would be on that list!”

Oh gosh this one had me laughing out loud! I nearly spat out my water everywhere. Gotta love the innocence (or not) of kids!

I have been laughing about that shopping cart obit since I read it the first time. Thanks, S. Carson!

Where is the comment from a while back on family vacations where the commenter as a child ended up at a hotel with mirrors on the ceiling and a coin operated water bed and a heart shaped tub?? Truly that might have been the funniest thing I read all year!! A true gem.

Oh yes!! Haha I loved that one.

I loved that one too! I still remember that the mom wouldn’t even allow the dog to sleep on the bed!

Like, you know the comments are gold when you’re commenting on the comments post! Legit look forward to combing through them every time I’m here!

I shared this post with my husband since my first-kiss story was featured (hello, mortification afresh!) and that’s how I learned that I apparently never told him that story! I can’t believe I somehow kept that epic of teenage romance to myself.

Also, after reading these, the husband was dying to know if he’s a “salmon flipper.” I’ve told him before that he flails and flops in his sleep, but I think he was really looking for the “salmon” qualification. (He adores them. Like a lot. Like I bought him a salmon-themed Star Wars parody shirt that says “RETURN OF THE SOCKEYE” and he solemnly whispered, “It’s great because salmon *do* return.”) So thank you to all these amazing comments for cracking us up!

No joke, need to hire! I’m snort laughing at Return of the Sockeye.

I CANNOT stop laughing! Commenter of the year!

“It’s great because salmon DO return” is killing me. Echoing more Michaela in 2K19!

Wow I just wheeze laughed my way through the relationships section of this post. I actually had to wipe my eyes between sentences in the salmon flip entry, mainly because I can picture exactly what is happening in that scenario because my 6’3″ freak of a giant husband does the EXACT same thing and has fallen off the bed more than once doing it.

Okay I chuckled at the salmon flip but I outright gaffawed at the image of your 6′ 3″ husband falling off the bed!

Lol – I’m always terrified my 6’3” salmon flipper of a husband is going to fall out of bed, too!?

Oh Larry! If you only knew what an impact you made on the world. I think of him every single time I am at the grocery.
Thanks for the laughs today!

Me too!!! Since I heard of Larry’s wishes I have even started grabbing extra carts on my way to the cart-corral.

I totally think of Larry at the store. Best thing ever.

Thank you for making “I can Love you Like That” song of the day, Major throwback!!! All the feels :)