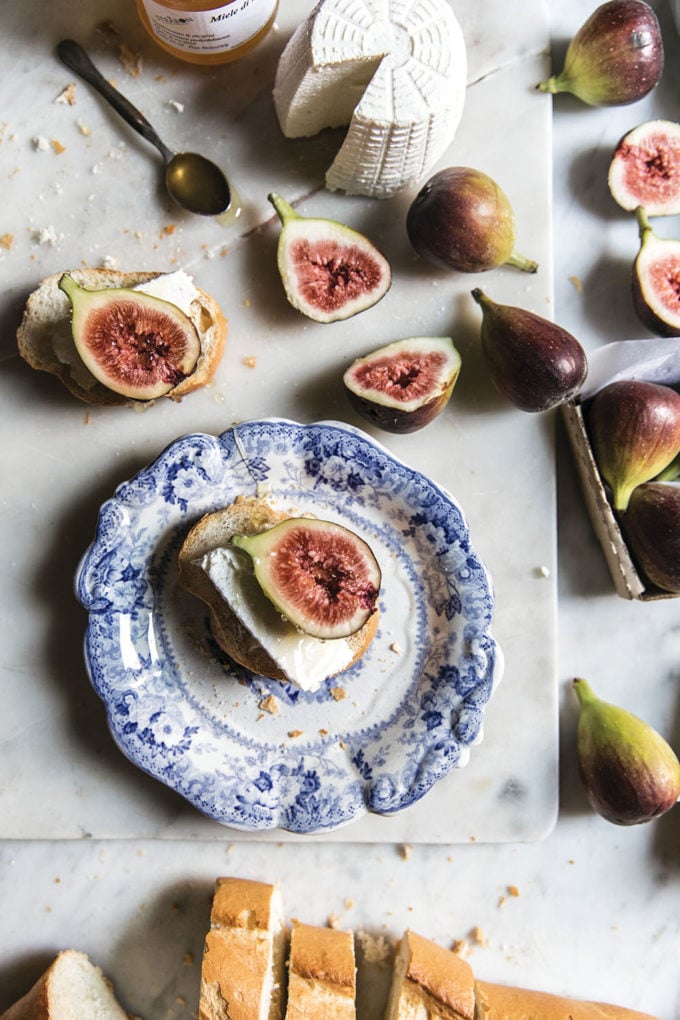 Today, we’re happy to continue our month of simple appetizers with this trio of delicious crostini from our friend Skye McAlpine’s new cookbook, A Table in Venice. Skye actually grew up there, and loves eating these small snacks with friends, as a way to tide everyone over until dinner. Easy to make and even easier to devour, they’re an instant crowd-pleaser. Here’s how to make them…

Crostini are nothing more than rough slices of crusty bread, usually baguette, topped with whatever you fancy. They’re probably the most popular kind of cicheti [or small snacks], and you will see them piled high on the countertop at every Venetian bacaro. This is not really a matter of cooking — more just simple assembling a few choice ingredients, whatever is in season or in the larder. Here are a few of my favorite flavor combinations…

Cut the bread into thick, rough slices and top with a generous chunk of ricotta. Arrange the ﬁgs over the cheese. You can stem and peel the ﬁgs if you prefer, though I am partial to the rich hues and texture of the skins [it’s all edible], so I don’t usually bother. Drizzle liberally with the honey and sprinkle with salt just before serving.

Cut the bread into thick, rough chunks. Arrange a couple slices of mortadella on the bread, then sprinkle the pistachios over the meat.

Cut the bread into thick, rough slices. Tear open the burrata and spoon the creamy middle onto the bread. Roughly roll the pomegranate around on a hard surface to loosen its seeds. Score around the middle of the fruit with a sharp knife, then tear it open with your hands. Hold one half over a bowl and tap forcefully with a wooden spoon, squeezing a little to remove the seeds. Use a teaspoon, if need be, to scoop the rest of the seeds out. Repeat with the remaining half. Sprinkle the ruby-red seeds over the cheese, drizzle with a little olive oil and sprinkle with a pinch of salt. 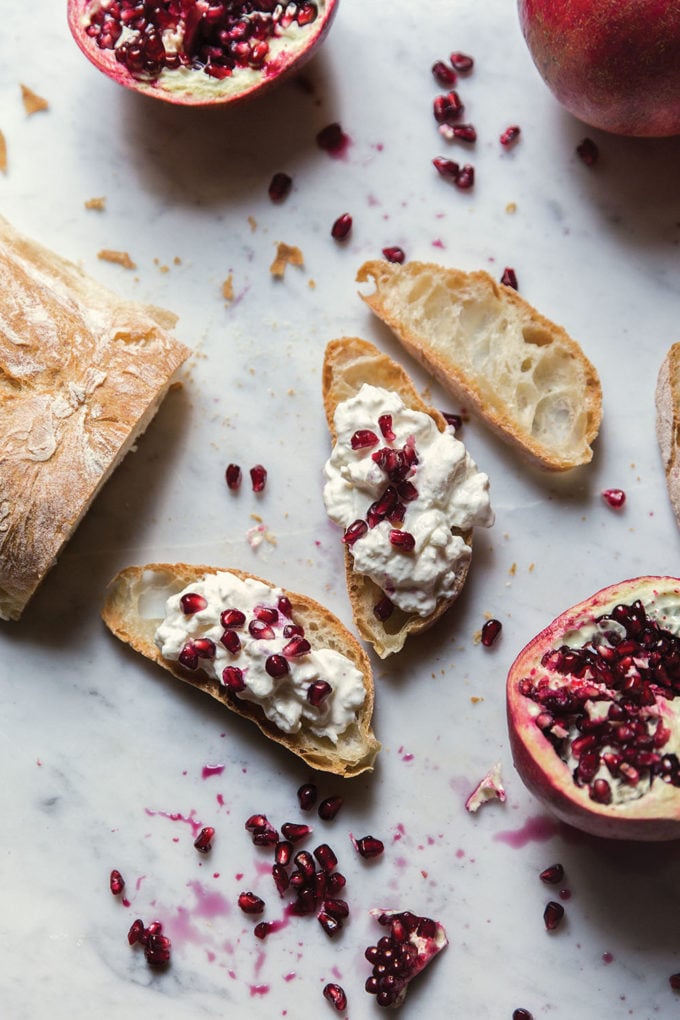 Skye also told us an insider tip for going to Venice restaurants: “Instead of choosing a dish from the menu, ask your server what he or she thinks you should eat. They’ll often have a whole different set of dishes that aren’t on the menu that they’ll give to people who ask. Maybe they have some perfect asparagus, but not enough for every guest; they’ll make that for you. Many Venetian restaurants are almost like an extension of a home kitchen.”

Thank you so much, Skye! Your new cookbook is beautiful.

These look so delicious! They’re making me nostalgic for my time in Florence!

joanna – i would love a post about ‘a week in the life’ of your family’s meals. do you meal plan? eat out? order in? meal prep?
would love your insight on how you tackle cooking/meal planning whilst working full time and having 2 kids. trying to figure out what to eat (since i’m not much of a cook) has been the hardest part of motherhood!
thanks so much! xo

I love this post idea as well, always looking for clever tips and ideas

I met Skye in London recently at a book signing. It’s a great book with good text and photos of Venice.

I love to sub avocado for cheese – even though I love good ricotta, my body does not so avo has become my go-to. I smear a dab of sweet white miso first, add avo slices, drizzle with toasted sesame oil, add a splash of tamari, then sprinkle both furikake and a pinch of cayenne. This is my go-to snack morning, noon and night!

This sounds so good!

But remember the crostini you guys posted on here before with the toasted brie, red grapes, and honey? Oh my gosh, it was so good. Even on my dumb gluten free bread.

I think these will make great picnic snack too!
I would love to see easy breezy picnic ideas post :)

I was at your talk with Skye yesterday so nice to see a little follow up here… since I couldn’t really hear much yesterday. These all sound soooo good, especially the ricotta and fig combo since figs are my JAM.

thank you so much, angie! xoxo

They sound great! I’m going to make the first one this Summer, in August when it’ll be fig season!
I have to say, sometimes I get upset when I come across a bunch of lovely recipes and they all ask for out-of-season ingredients. Like, right now, figs and pomegranate. But the idea is really inspiring and sounds delicious, but I have to wait until their season!

What is mortadella? Is it a mushroom or a cheese? O wait – it’s meat?! It’s fancy baloney! Obviously too fancy for me. I do love the ricotta, fig, and honey though. Delicious!

It’s a kind of Italian bologna. It has small white spots of fat and bits of pistachio in it. It’s much nicer that this description sounds!

Oh wow, those look delicious! I can’t wait to serve them at our next dinner party! xAllie

Sounds so good! What is considered “good quality thin honey”? I’m assuming the honey in my cute little bear isn’t going to do the trick? Love this food series!

Hahahaha, it’s so hard to be gentle when squeezing the cheap, thick honey out of the cute little bear.

I’m curious about this too. Can someone provide a brand for thin honey? I’d love to try the first recipe!

it’s hard to beat the cuteness of little bear honey jar, but maybe try checking a local farmer’s market, if there is one in your area.. I usually found there the widest range. The texture and colour can change a lot depending on the kind of flowers (wildflower are usually thin and would be my easy go for the recipe or another pick could be orange blossom, otherwise acacia and chestnut are very thin but a bit bitter, eucalyptus is great as a spread or in an herbal tea..). oh and recently I discovered that the whipped honey! It’s creamy and whitish, is delicious on toast as a spread. I do love honey :)

Curious about this too. For quality honey I think getting something local from the farmer’s market is the best bet, as a general rule. For drizzling, perhaps warm it gently?

I dunk my cheap bear in some warm water for a bit to warm him up and thin out the honey when I have to? It sometimes helps! I also kind of want to try this with a bit of the really good thin maple syrup I have from a friend, I bet it would be different but delicious. (How to spot the Canadian, eh?)