“My Husband and I Sleep in Different Bedrooms” 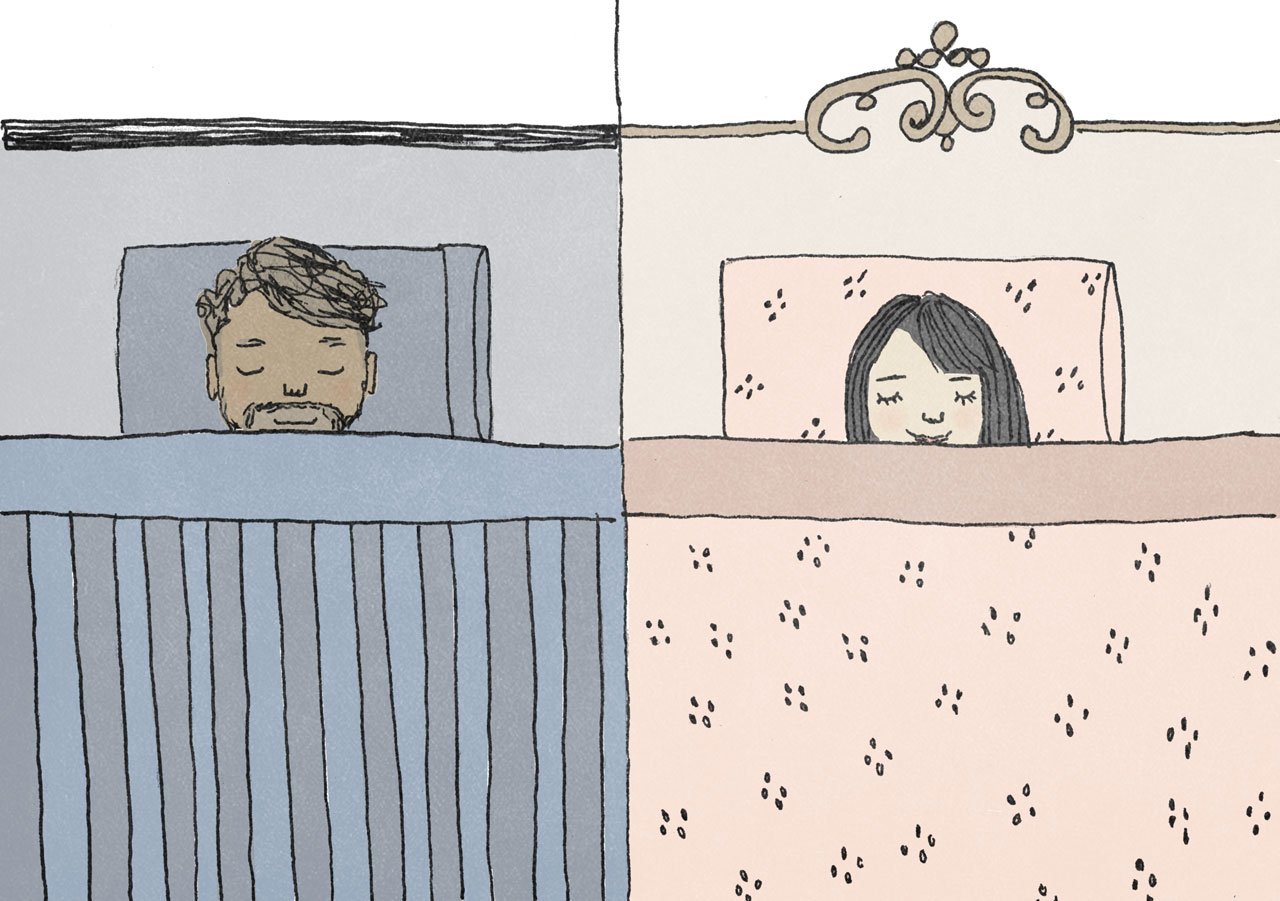 This summer, when I wrote about my marriage’s bedtime routine, we noticed a compelling conversation happening in the comments. A bunch of readers said they were happily married but slept in different rooms from their spouses. We reached out to them, and here’s what they said…

How separate bedrooms came about

At first blush, separate rooms might seem dramatic — did the couple get in a huge fight? Is their relationship on the rocks? But sleeping apart is actually pretty common. A 2015 National Sleep Foundation survey found that 10 percent of couples reported sleeping in different rooms — and as many as 25 percent said they slept in separate beds.

Many reasons for sleeping apart are benign. “Originally, it was my husband’s snoring,” says Katie, who lives in Illinois and has two teenage sons. “The noise got really bad, and I was always poking him. Often, I would grab my pillow and go to the living room.”

Sleeping apart also permits alone time within a busy household. “My husband and I are big introverts, and once our twins were born, we needed more alone time than ever,” says Lee. Now, on a typical evening, the couple will put the twins to bed, hang out in the living room and part ways around 10 p.m. to retreat to their self-described introvert caves. “I swear, this has SAVED our marriage,” says Lee.

Erin from Florida agrees with the need for a room of one’s own. She and her husband are light sleepers who pick up on each other’s energy. “If one of us is struggling with something, and tossing and turning, the other will inevitably fall prey to the fitfulness,” she says. “We relish being alone at night to recharge our batteries.”

Where exactly they sleep

If you decide to sleep apart, the ideal scenario would be two different bedrooms, but what if you don’t have much space? “We don’t even have a master bedroom right now!” says Stephanie, who lives with her (snoring) husband and two children in New Zealand. Since converting their master into a home office, her husband has been crashing in the living room, while she has a single bed in the nursery.

No one likes waking up grumpy — and spending the night with a tosser-and-turner can cause that feeling every damn day. “We were miserable for our first handful of years together, and after we had a baby, forget it,” says Erin. By bunking apart, couples hope to wake up more refreshed. “We are so much happier during the day,” says Stephanie.

Plus, in your own room, you can choose the optimal temperature, fan setting, bedding, wake-up time, whatever you’d like. “There are so many things that I like about sleeping separately, but mainly aesthetics, which sounds kind of sad,” laughs Katie. “My bedroom feels serene to me, and I make my bed every day. My husband, not so much — he has a tendency to spill his espresso in the sheets!”

Movies and TV shows often equate intimacy with falling into bed together, but sex can come about in different ways, of course. “We might miss out on spontaneous interactions, but we just initiate sex earlier in the evening, or ask the other person while we’re spitting out toothpaste,” says Erin.

Plus, you can always knock on each other’s doors. “I retreat to my room to read before bed, so if I’m instigating, I might say, want to come read for a bit?” says Katie. “If my husband is instigating, he’ll come to my room dragging his big reading bolster and I’ll know what’s on his mind.”

What friends and relatives think

Since having separate bedrooms within a marriage isn’t the societal norm, friends and relatives aren’t always sure what to think. “I feel like I am forever explaining our situation,” says Stephanie. But generally, for these women, friends have been understanding. “My close girlfriends know and think it’s great, or at least amusing,” says Erin. “I’m pretty sure a few of them would like to try it themselves.”

What about kids? “I worried that our sons might think we were splitting up,” says Katie. “But they see us being affectionate all the time, so I don’t think it has ever been a real concern.”

After all, if something’s not working, why not switch things up? “What I find bizarre is how many couples have similar issues but keep sleeping the way they do because it is ‘normal,'” says Stephanie. “After being married for 30 years, my mum still loves snuggling under a big duvet and my dad still wakes up drenched in sweat — at least try two duvet covers!”

At the end of the day, of course, you don’t need to share covers every night to be connected. “If there is one thing in life I don’t worry about, it’s sleeping separately from my husband,” says Stephanie. “My husband is my best friend, and there isn’t one tiny ounce of me that feels like we aren’t meant to be. Our relationship is built on many things — sharing a bed just isn’t one of them.”

Or perhaps even sharing a house. “Some days I fantasize about separate little houses, Scandanavian-style, connected by an open porch,” says Katie. “I still love him like crazy after all these years, though, so maybe just a small porch.”

What about you? Have you ever thought about separate rooms? Or do you prefer having the same bed?

P.S. How to keep up a marriage after kids, and scheduling sex.

(Illustration by Alessandra Olanow for Cup of Jo. Thanks to Diana Woodward for help reporting.)

By Haylie Swenson
Relationships
“I Didn’t Have Sex for the First Two Years of Marriage.”
March 12, 2019

250 COMMENTS
By Haylie Swenson
Relationships
“I Was Happily Married When I Realized I Was Bisexual”
July 9, 2019