Have a Great Weekend. 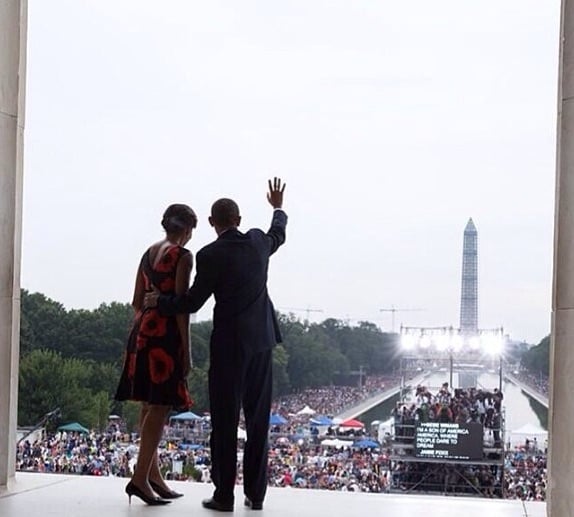 This weekend, we have unusually exciting plans! Alex and I are heading to the WHITE HOUSE for a holiday party!!! (!!!!!!!!) I’m sure we’ll see the Obamas for 2.5 seconds, but we’re going out of our minds with excitement and constantly pinching ourselves. Obviously, I will report back on anything/everything. My friend Linsey says I should wear this and give the other half to Michelle:) Have you ever been inside the White House? We never have. Hope you have a good one, and here are a few fun links from around the web…

Self control is just empathy with your future self.

How to vacation proof your relationship.

One man’s beautiful letter to his late wife. (“Little projects”… oh, my heart.)

What a pretty quilt.

Michelle Obama tells kid interviewers she will not run for president: “We’re out.”

Who’s up for this Christmas drinking game?

Amazon Go is freaking me out a little.

Here’s the Cup of Jo holiday gift guide so far. (I got this for my mom, and I’m excited.) Next week, we’ll be sharing gift ideas for dads and people who are impossible to shop for — like co-workers and in-laws.

Plus, three great comments from readers…

Says Chris on female friendships: “My friends and I have a thing called ‘affirming dinners.’ It started when one of our friends had a horrible breakup; because she was so sad, we all went out and spent all evening telling each other the things we liked about each other and how awesome we were. Now we say to each other when we are feeling sad, ‘Let’s catch up for an affirming dinner!’ Only girls, and we go to a nice restaurant where we have the banquet option and lots of wine!”

Says Emma on work twins: “My boss and I find ourselves twinning way too often. He’s a man in his early 40s, and I’m a woman in my early 20s. I don’t know who this is less flattering for. Essentially we both dress like Justin Long in the old Mac commercials.”

Says Shan on Baby It’s Cold Outside‘s lyrics: “This is a really great article that puts the song in its historical context. I DO love that we are using this song to talk about consent… As feminists, it’s important to question the messages we receive from pop culture. I think it’s also worth noting that ‘Baby It’s Cold Outside’ in its historical context is about a young woman pursuing her own sexual desires in a conservative culture where spending the night with her boyfriend would have caused quite a stir. She’s liberated from society’s expectations of her as a woman in this context, not oppressed or coerced. Thanks for the discussion!”

92 COMMENTS
WRITE A COMMENT
Design
most popular
01
My Sister’s Home Makeover
02
What Are Your Top Three Books?
03
The Ultimate TV Guide (If You’re Looking for Something Great)
04
Catherine Newman’s House Is a Joyful Jumble of Books, Games and Cats
05
Behind the Scenes: Making a Magazine Cover
Subscribe
Login
92 Comments
Inline Feedbacks
View all comments
Marcia

I ordered the ‘hilarious socks’ mentioned here and it turns out that whole website (Belle Lily) is a scam! They just take your money and never ship your item (you can google many many negative reviews of them). Love your blog, but you might want to take down that link! x

thank you for linking the love letter. how beautiful and touching…. made me believe in true love a touch more

Oh, I missed the weekly round-up on Friday, but thanks for including my comment! I love analyzing pop culture with a feminist lens–especially music! Love your blog!

OMG! Update please!! I can’t stop checking your blog site, waiting with baited breathe to hear about your weekend. Even if you have no significant details to share, please share. :-) Hope it was magical!

Can you see me? I’m right over here waving at you. I’ve lived my entire 66 years right here. In fact, that’s the exact view I have when I walk out my front door and facing in the same identical direction. Gives me goosebumps everytime.

It’s killing me that you get to go but I’m very happy for you. It will be beautiful. I’ve been several times. It’s hard not to well up as you stroll through, especially at Christmas with “The President’s Own Marine Band” softly playing gorgeous Christmas music.

My hobby and favorite interests are The White House building and The Presidents.
This President in particular will be sorely missed. Mr. Obama and his family are well loved here in the area. Well loved indeed. A most decent soul if ever.

Wish him farewell, Joanna. We won’t see the likes of him in a very long, long time….if ever.

I’ve got to hear a complete, in depth report of your visit. Must.

Such a beautiful letter. It reminds me of Richard Bausch’s Letter to the Lady of the House… about married love over time. Read it here: http://www.newyorker.com/magazine/1989/10/23/letter-to-the-lady-of-the-house

Here’s a recording via the This American Life Archives of Bausch himself reading it: https://www.thisamericanlife.org/radio-archives/episode/93/valentines-day-98?act=1

Can’t wait to see La La Land. Also, those socks are pretty funny ;) I know a few people who would love those.

Hope you and the fam had a great weekend!

Michelle Obama for a beauty uniform!!! Haha, well one can dream.

Congratulations :) loved the video of them answering questions from kids

That’s so exciting! I’ve always wanted to go and to go while the Obamas were there still. I won’t want to go aftet they’re gone. I don’t think I could ever think of the Presidency in the same way again.

Wow! I can’t wait to see your posts!
http://www.motownsavvy.com

Excited for you and Alex, hope you had an amazing time. Can’t wait to hear about it! Happy holidays:)

Joanna, speaking of natural tampons, have you heard of menstrual cups? My post partem periods have been more painful and after I switched to cups the pain is gone. They are great and I hardly have to spend money on pads or tampons anymore

I literally just wrote about how the new Amazon store is freaking me out too!

Joanna- I love reading Richard Feynman’s works, he was often known as the people’s physicist for how much fun and “easier” he made physics for his students. He led an extraordinary life. I’d highly recommend looking him up! Thanks for that beautiful reading of the love letter to his late wife.

I went to the White House Christmas party when Bush was in office. The president and fist lady stood in a room for the entire party having their photo taken with each guest. We felt so sorry for them that they didn’t get to enjoy the party so we covered our teeth in chocolate truffles and gave them a big grin as we walked up trying to give them a laugh. They did laugh but the photographer rushed us through so fast that we didn’t have time to get all the chocolate off our teeth. Now I have a photo with the president and my teeth are black.

I LOVE YOU!! Jamey, that is awesome-especially because you have the photo to prove it! Slow clap! I cannot even imagine being so chill in front of a president. I actually got to see the President land in his helicopter from the window of the Monument, and it brought tears of excitement to be so close to the Obamas!

How cool is that, congrats must be in order because you were invited – I don’t know how these things work, but am looking forward to hearing all about it & hope you’ll post pic of what you wear.

Ah so exciting. Well I live by the White House and its a bittersweet realization to many. We will see what people start to put their faith in after Jan 2017. Anywho, thank you for the gift guide. I was able to buy two thank you gifts and many for myself. lol Stay warm, you may even saw me out there lol xx

Reply
Emily at The We Files

What a great shot of the Obamas! I visited DC as a child and have big dreams of taking our daughter eventually. Enjoy every moment! I can’t wait to hear about it.

I hope you get to meet the Obamas! I would love to know what you would ask Michelle if you had the chance–as a long-time Cup of Jo reader, I think that would be an incredible interview. Should we start a letter writing campaign to make that happen? ;)

Amazing links this week…. I’m saving the video of Oscar Isaac reading Feynman for later because I am just not ready to cry that much this morning! (I did read the letter though, which is how I know I’ll be a mess. So beautiful.)

Hi Joanna! I live in Budapest and would love to meet you and show you some places in my city. There is a lot going on here. There are beautiful old buildings, tonns of culture, new restaurants popping up every week etc. (By the way Im a fan of Cup of Joe since ages. I used to read your posts during nursing my first son at night huh hard times!)

Oooh what an exciting weekend you have planned! I wish Michelle Obama would run for president, she’d be wonderful, such an inspiring woman! Awesome list as always x

So exciting!!! Will you wear navy nails (heehee)? Hope you can relish it. Can’t wait to hear about it. Next you’ll be singing with James Corden!

I went on a White House tour a couple of years ago with my husband – he was in DC for work and I tagged along (we left the kids with grandma and grandpa). He’s since been back, but this was my only visit. I was surprised by how moved I was by the history and beauty of the structure and institution, and I felt lucky to experience it while an administration I so admire was in residence. I felt patriotic, which is a concept I think we sometimes forget in everyday life. It was an unforgettable experience.