How I Broke My Worst Habit 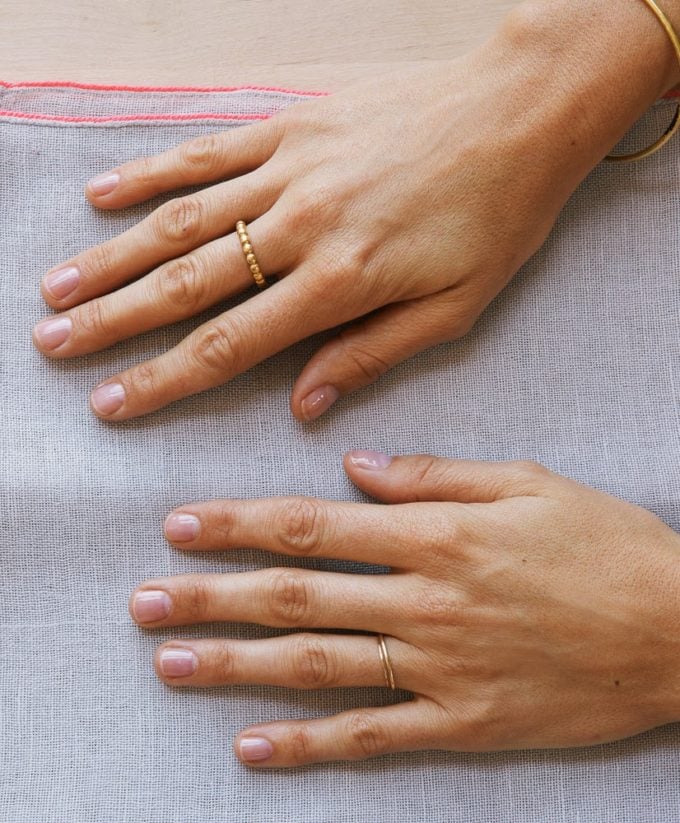 For most of my life, I bit my nails. It was such a gross habit, but I’d always end up biting them while reading or watching TV at night, maybe as a way to deal with stress or restlessness. Every year, my New Year’s resolution was to stop (exhibit A, exhibit B), and I even tried this vile stuff. But then a few weeks ago, something finally worked…

One evening, Alex and I were hanging out in our living room, watching Veep and eating take-out Indian food. We had ordered saag paneer and rice, which literally could not be softer. It’s basically soup.

After the meal, I felt something funny on my front tooth. Was it a bit of spinach? A piece of rice? I went over to the mirror, and almost fell over: MY TOOTH HAD CHIPPED.

Nothing makes you feel bedraggled more quickly than having a messed up front tooth. It wasn’t a charmingly off-kilter Lauren Hutton kind of thing, it was a full-on giant chunk out of my tooth. Horrifying.

The next morning, I called my dentist’s office and asked how soon they could see me. “We’re pretty booked for the next two days,” they said. “I’ll be there in ten minutes,” I replied.

While reclining in the chair as Dr. Gangi assessed the damage, I asked him why it had happened. “I wasn’t even eating anything crunchy,” I said. He asked me if I drank a lot of coffee. No. Soda? No. Do you bite your nails?

So, there it was. Three decades of nail biting had weakened my front teeth so much that wilted spinach could make them chip. Dr. Gangi told me that some people chip their teeth multiple times and finally have to get veneers. This was too much. This would not do. Teeth could not just be falling out of my head.

And so, with that, I stopped cold turkey. It was surprisingly easy, once I was motivated. Before, I had figured, oh, it’s a random stress reliever, it doesn’t hurt anyone. But now there was a real reason to commit to quitting. Instead of biting my nails absentmindedly, I became more present and aware of when I was doing it, so I was able to stop.

So, now I’m curious to ask you about the fun part of nails! My nails are now long enough for polish, and I’d love to know which polishes you like wearing. I love the look of Dior Nail Glow – all glossy and shiny — and for fall, I’d love to try navy nails. Lexi says she always gets a manicure without polish, since it’s quicker and less expensive, and polish always chips so quickly anyway.

What about you? I’d love to hear! I feel like I’ve just entered a new club:) And have you ever bitten your nails? Do you have any habits you’re trying to break?

P.S. How to blow dry your hair like a stylist, and the prettiest kind of earrings for spring.