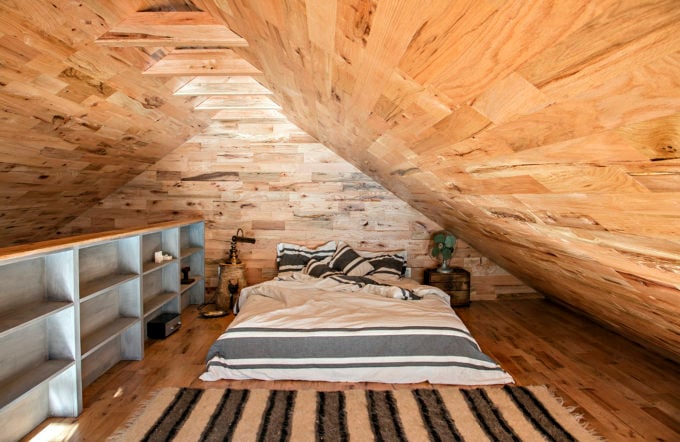 Do you have any travel plans this summer? I’m eyeing The Glen Wilde, which opened this weekend in upstate New York and looks really cool. Take a peek… 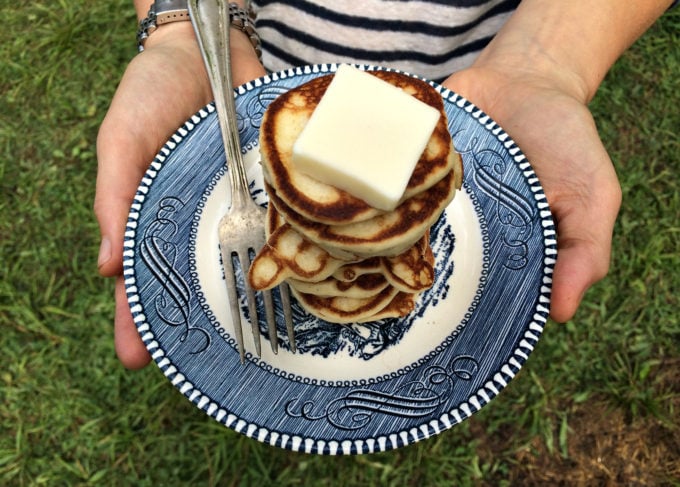 In the 1950’s, the property had been a vacation community called Paradise Cove. Families visited every summer, but over the years, the place grew dilapidated and closed down. Now two friends — Josh Farley and Jeremy Floto — are bringing it back to life. 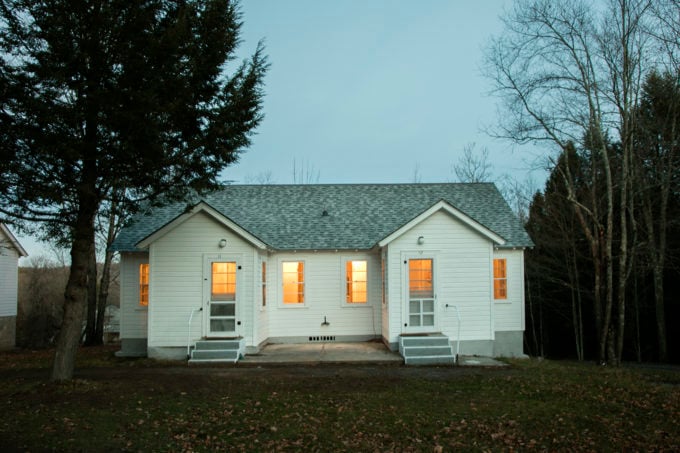 “Renovating the cabins was surreal,” Farley told us. “People who had rented every summer had gradually stopped coming. We found original Star Wars bedsheets still tucked onto beds. And great vintage mugs and plates that we’re now reusing.” 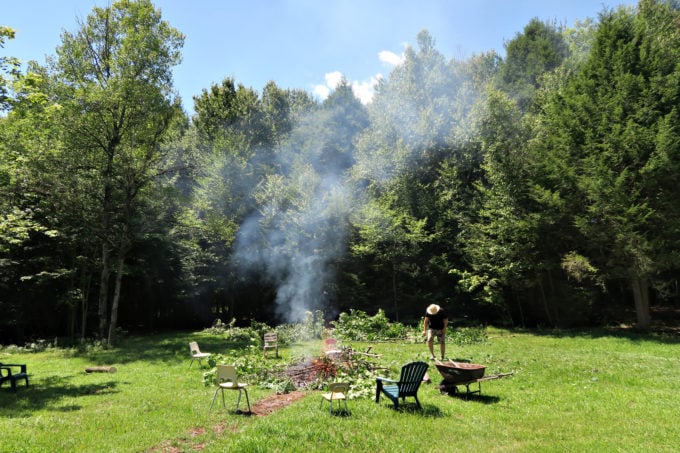 One- and two-bedroom bungalows are spread around 11 acres, less than two hours from New York City. The grounds have fire pits, hammocks and a big picnic table. It would be so fun and relaxed to go with friends. 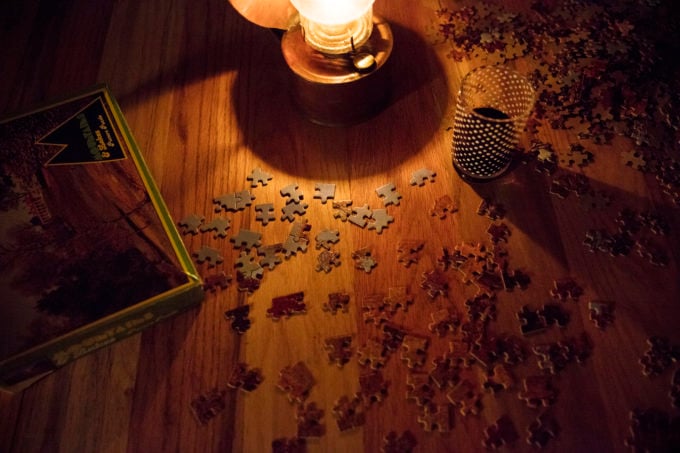 Nearby, there are apple orchards, wineries, antique stores, a brewery and a swimming hole with a waterfall. “One of the best surprises, which we didn’t realize when we purchased it, is that the property backs up onto woods with hiking trails,” says Farley. “Plus a river and a great two-mile trek that puts you right into a cool old-school playground.” 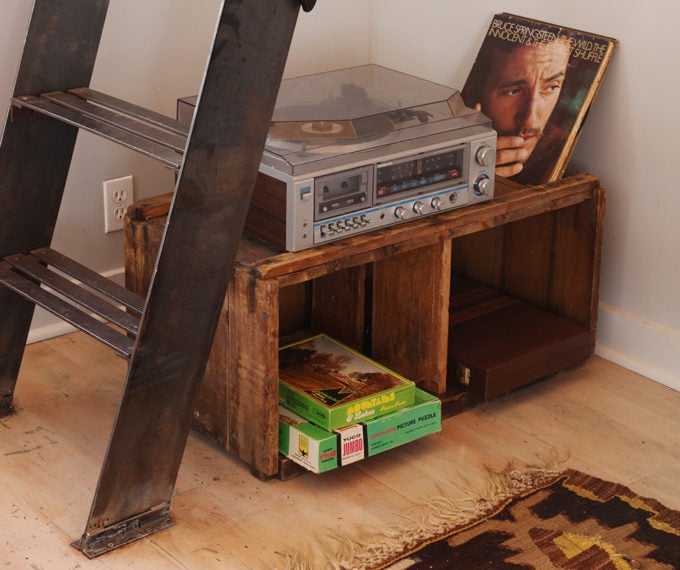 Wouldn’t you love to go? Where else are you planning to travel this summer?

P.S. Pajamas for vacation, and 10 tips for traveling with a baby.

Thank you for the tip! Heading to Glen Wilde this weekend with family to celebrate big birthdays – my husband’s 35th and my father’s 70th! Can’t wait. Xo

this would be a great trip to do with a huge group of friends!

Looks brilliant – ticks a lot of boxes for a great place to stay. We are heading to France this summer, staying in a Gite in the Loire Valley. I am looking forward to mooching around the local markets and drinking chilled rose. This year we are doubly lucky as the Tour de France is passing through the local town, which should keep my husband and teen sons happy!

Reply
nicole b.
Reply to  Elaine

Elaine, this is my dream!

That looks amazing! Reminds me of what my friend Lex at the Noon Collection did with an old 1950s lodge in Big Bear, Calif. Similar aesthetic! I’m in L.A., so NY doesn’t make sense, but I want to try and go up there to Big Bear this summer. :)

Headed to Co. Waterford Ireland in august as NYC is BRUTAL!….Ardmore is a beautiful little village and the Cliff Walk there is breathtaking! Heading on then to Lismore a pretty little village and its environs…the scenery i.e the Castle gardens and surrounding countryside is breathtaking (Ballyduff Upper and the back roads are amazing…did it a few years back and can’t wait to do it again!

That looks amazing! Last summer, my boyfriend and I rented a cabin one night, and a yurt another night, in the Porcupine Mountains in the western U.P. as part of our long road trip up t here. It was amazing to be alone in the woods–and the cabin was actually right on Lake Superior! Cabins like at Glen Wilde would be nice, too…and not require planning all your weird campfire meals ahead of time.

This year, we’re going to Iceland with a few friends who suggested it–eep!

What an adorable place!!
xo
http://www.laurajaneatelier.com

Yet another thing to add to my list of places I want to go. Do they need help running it? Can I just permanently live there?

Baby #2 is due in the middle of July, so no summer travel plans for us. However, we do plan to take a family (my parents, my sister, and my husband and our 2!! kids) to Orange Beach, AL, in September. We’re still new to living in the South, so we’re looking forward to exploring the Gulf Coast and finding our favorite beaches.

We have stayed closer to home since my three year old was born. Vacationing mostly in New England, but last year we ventured to the Adirondacks and Montreal via train. In August we will welcome baby no. 2 and stick somewhat close to home visiting Cape Cod, Maine and New Hampshire through out the summer and fall.

This is so beautiful <3 you should definitely go!

What a dream summer retreat! All I really want to do this summer is cook out, ride my bike, and lay in the sun. Not glamorous, but very relaxing! :)

The history about this place and that wonderful name “Paradise Cove” was enough to get my interest. :)

Since I live in Sweden, I guess I have to rely on, that someone from Cup of Jo’s team or its readers spend a few days on the property and then come back with a great story and photo series?!

As always, heading to Italy in August. People would tell me that I am lucky, but that’s not really a pleasure trip always… I’m not going where I want to go. I’m going at my in-laws.

This looks so beautiful and tranquil! We head to London and the Cotswolds at the end of this month and then Provence in mid-July with family. I’m really looking forward to both and need to get back to planning! : )

we are spending our vacation in Denmark. Rented a cabin/rental house by the limfjord for 2 weeks and then will go to a huge tropical water park (google: “lalandia”) and then some days in Aarhus. Also we will take a ferry over to southern Norway (city: Kristiansand) and there we will stay a few nights in the zoo! they have a pirates village where we will be overnighting. (google: abrahavn, Kristiansand zoo). Lots of fun for the kids.

My fantasy is glamping in wine barrells :) http://www.sava-hotels-resorts.com/en/accomodations/terme-ptuj/wine-village/
maybe we will do it this year…

Wow, this place looks so fascinating! It’d be cool to get away from the city and stay in an area like this.

Looks so relaxing! No travel plans for us as we are on the brink of a long distance move. We will definitely need a vacation after this!

So awesome! I would LOVE to go. :) The styling is so Wes Anderson.

This looks so quaint and lovely for a weekend getaway. I would love to find something like this in the Midwest.
The hubby and I are taking our boys and the Labradoodle to Denver and Moab, Utah to hike, climb, and get dirty…can’t wait! Here’s to Summer!

Looks so lovely!! Since Dirty Dancing was always my “home from school sick” movie growing up (along with Ferris Bueller, of course), the idea of a north eastern camp/resort has always been so romantic to me. Would love to go there with my family!

This summer we are driving from Seattle to Yellowstone, to spread my grandpa’s ashes, and then continuing our drive to New York, as we have some friends getting married in Long Island. Then, leaving my husband in Brooklyn since he works there and I’m heading back west with our two kiddos. I may need some pointers on how to survive that trip with a 1 and 3 year old!