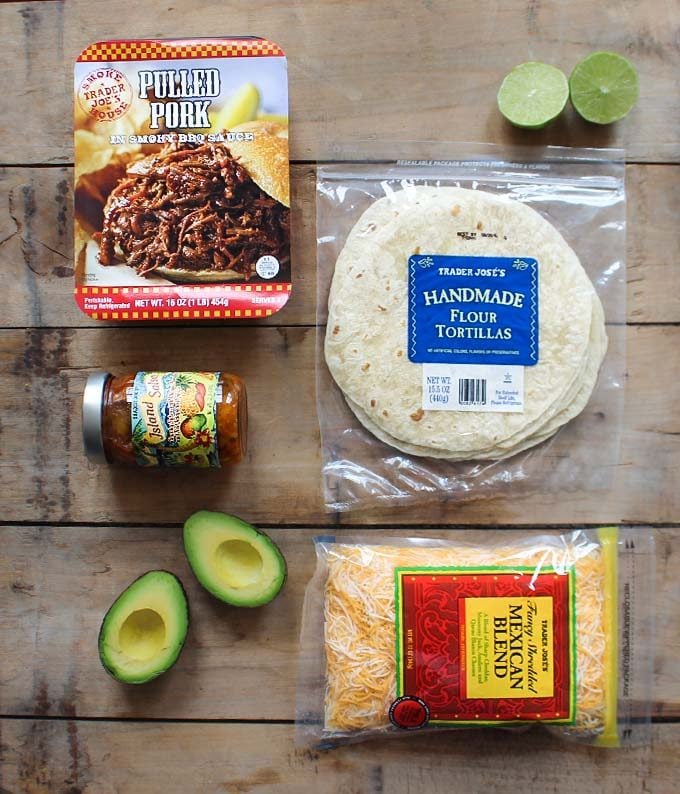 When we were on Fire Island a few years ago, my friend Linsey disappeared into the tiny kitchen of our rental house, with five little kids running underfoot. Fifteen minutes later, she emerged with the most delicious pulled pork tacos. Crazily enough, she revealed that she had used mostly Trader Joe’s stuff. Here’s her “recipe,” plus a few others…

Heat up the pulled pork. Then pile on tortilla with mango salsa, cheese and avocado. That’s it! 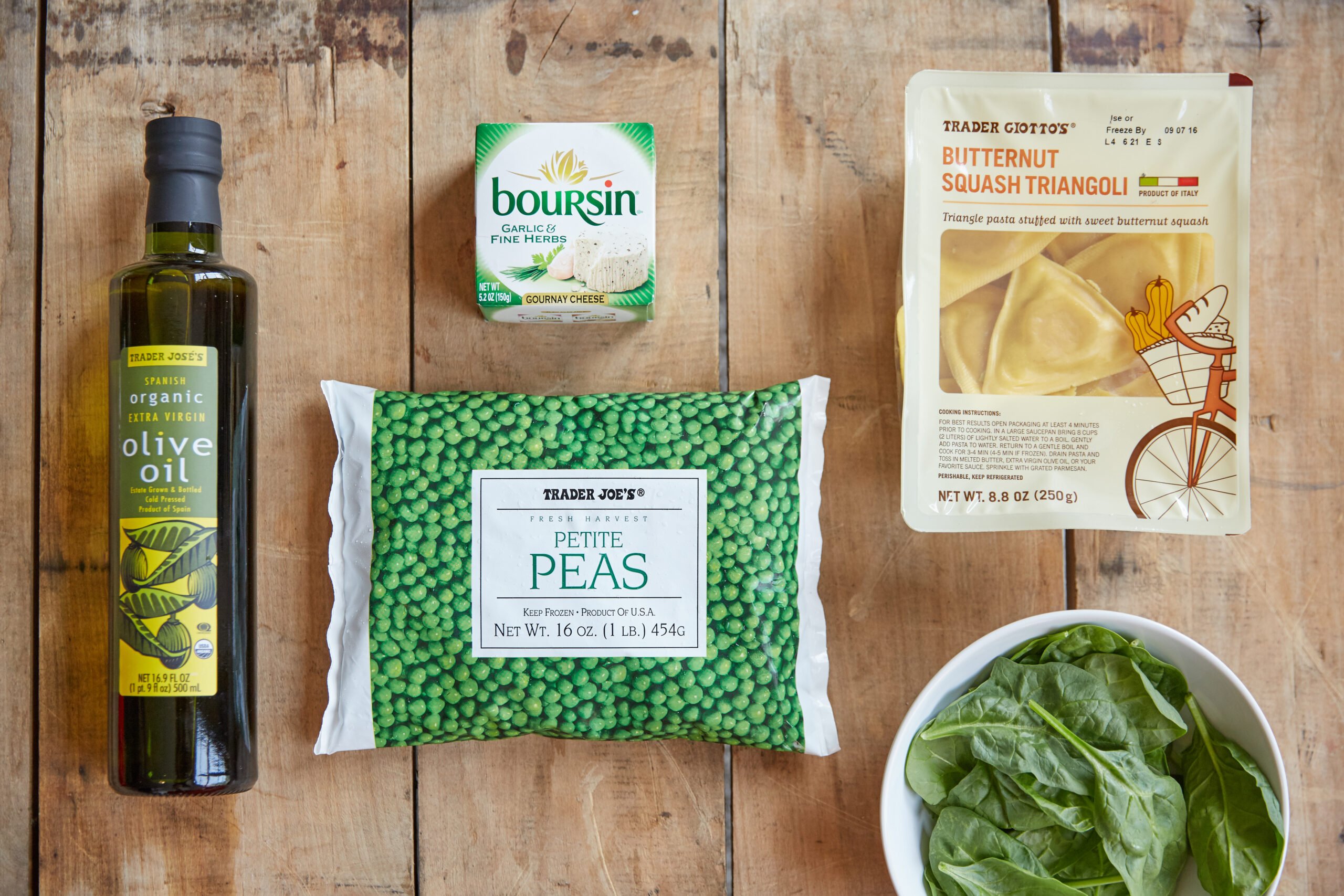 Make the ravioli, then shortly before they’re done cooking, throw the peas in. Then drain and stir in Boursin and olive oil. If you’d like, stir in baby spinach, which will wilt when mixed with the warm pasta. Add pepper to taste. 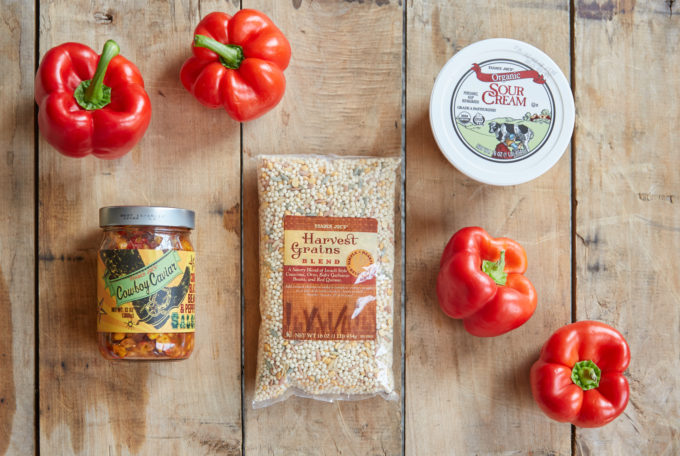 Make half the bag of harvest grains. Then mix in half the can of Cowboy Caviar (or more if you’d like it spicier). Cut off the top of the red peppers and pull out any seeds or ribs. Fill peppers with mixture. Put in a baking pan covered with foil in a 375 degree oven for 30 minutes. Serve with sour cream or yogurt.

Update: Whoa! An amazing CoJ reader named Alisa complied a bunch of the Trader Joe’s hacks from the comments section! Download it here. If you’d like to thank her, she kindly asks to please consider donating to support Ukraine.

What Trader Joe’s recipe hacks do you have? Also, have you seen this Ode to Trader Joe’s? Hahaha.

Cup of Jo has been running for 15 years, so now and again, we highlight one of the most popular posts from the past. Here’s one of our favorites, originally published on September 1, 2016.

P.S. The fanciest Trader Joe’s dessert, and how to get kids to eat vegetables.

I think I may be the only reader on your blog who is NOT impressed with TJ’s. I went in once…browsed…and left with nothing. I can find most of the things that are mentioned here at just about any grocery store. I don’t understand the cult following, but if you are a member, I am happy for you! ha

So you’re saying you don’t like TJs even though you didn’t try anything. Sounds like my 5 year old that says he doesn’t like lasagna even though he has never taken a bite.
Yes, the store has similar items as a grocery store but by me, it is cheaper and TJs offers a lot of unique items.

This hack was actually inspired by food columnist Jenny’s newsletter.

I brown the pancetta in saute pan and mix in veggie fried rice. Cook according to instructions on package. Add fresh garlic, ginger, and/or onion. Cook for 3-4 mins. Stir in handful of shredded kale. Clear space in middle of pan and cook scrambled eggs while stirring it into the rice as it sets.

Drizzle with sesame oil and maybe a drop or two of soy sauce if needed.

So fast and delicious.

A can of cooked lentils and a jar of TJ bruschetta sauce makes a great and SIMPLE appetizer. We serve with tortilla chips.

TJ’s has dave many a meal over here. I’ll have to try those tacos. They sounds delish.

When cooked through add a few splashes of olive or cheese or any type of sauce. My kids love this!

Make mac and cheese separately. Chop up the peppers and sausage then cook them to the sausage instructions. Mix all ingredients together. Best dinner or lunch, easy to heat up again.

A winner this week: TJ’s black bean & cheese taquitos, topped with pico de gallo (homemade but they sell it too), sour cream, guacamole and salsa. I didn’t put any chili in the pico so my kiddo loved it too.

I swear you posted this Boursin and pea ravioli here years ago. It was a quick staple for a long time until our youngest developed a severe dairy intolerance (and we moved to. Place without a Trader Joe’s).

I remember this recipe too!!!

Boursin cheese will uplift pretty much any other food item to another level:
Salad a little bland: Boursin chunks
Eggs a little boring: Smear a bit of Boursin into it
Ham & Cheese need a face lift: Boursin will do the trick
Need to win first place at the Mashed Potato contest: forget the cream cheese, throw in a puck of Boursin!
Bagel a little dry: Boursin will rescue it after it’s toasted! Level up with some sliced avo too!

On regular rotation at my house: Throw some orange chicken and frozen broc in the oven, pan fry some potstickers, make rice, all done in 30 minutes (if you use the quick cook on the rice cooker).

TJs has frozen rice that can be microwaved in 3 mins. I will never cook rice again.

Cook the tortellini right in with the soup. Added flavor!

Tortillas and their refried beans. Any other stores is unfortunately not as good.

Naan pizzas with their spaghetti sauce and your fav cheese and the frozen tri color peppers.

We add a whole bag of riced cauliflower to the frozen fried rice to stretch it (plus a little soy sauce, since the cauliflower “blands” the rest out.) One bag of fried rice isn’t enough for our family, but rice + cauliflower makes it just right!

TJ’s saves m on so many nights with little kids. Tonight we did their cheese tortellini mixed with broccoli, feta, and butter. Earlier this week we had their Gorgonzola gnocchi mixed green beans. This weekend we had friends over and made their family size thin crust pizzas – perfect for whatever veggies you want to throw on top!

not really a hack but

YAAASSSS to Crystal sauce, a far cut above the rest!

No Trader Joes in Canada. But what you’ve never had, you don’t miss!

We love their brioche hamburger buns with the frozen mahi burgers, shrimp burgers, or (homemade) Weeknight Vegetarian veggie burgers. On the side, we either bake the frozen sweet potato fries or heat up the sweet frozen corn in a skillet with Everything but the Elote seasoning. Add the mustard-garlic aoli to your burger for the win!

One box Roasted Red Pepper & Tomato Soup + one bag frozen chimichurri rice + one can of chicken! The most delicious, hearty soup.

Yes, Maris! We make this all the time, and we usually throw in some frozen corn, sausage, and black beans, too.

Ok, as a busy working parent to three little ones, I’m seriously going to comb through these comments and compile them into a doc and send them to the Cup of Jo team. Cup of Jo Community cookbook anyone??

Yes!!! That would be amazing.

Maybe you could put it out somewhere electronically and people could donate to Ukrainian relief for an ecopy.

Oh my goodness. That would be so amazing!

Would pay for this!!

My good friend Deana Gunn has co-written a bunch of cookbooks using Trader Joe’s ingredients called “Cooking with All Things Trader Joe’s.” Great and diverse recipes, you should check them out on her website: https://www.cookingwithtraderjoes.com

Omg yes please! My baby just started eating solid food and while I love this phase, I know once he’s reliant on food for calories more than for fun I will really need easy weeknight dinner ideas! (Actually, I honestly need them now for me and my husband.)

Joanna and Kim – just sent you an email with the compiled document! <3

We do a fish taco from TJs, that both adults and kids in our family like:

Small tortillas (your choice of flour or corn)
Box of frozen breaded cod
Bag of sesame chop salad kit
Vegan dill dressing
Toast tortilla, add dressing, top with fish and then salad. Eat! We have chips and guacamole as a side

Re: frozen breaded cod – I presume this can just be warmed up in an oven? I don’t cook meat or fish but my kid loves them – so this sounds doable for us.

Whoops! Yes, bake the cod per instructions on the box

I’m just sitting here crying because my nearest TJs is 482 miles away.

I hear you! Living far from TJ has taught me there’s a lot more in a standard grocery story along these lines if you know what to look for. A quick-boiling pasta, even ravioli or similar. Plain ricotta cheese instead of the boursin. Preserved veggies in jars, especially in an international food section of some kind. TJ definitely has this big following, but creativity and carving out time for a longer grocery store visit so I can explore aisles that aren’t familiar to me has taken me a long way!

Dry your tears! These ingredients, or something nearly identical, and possibly even better, can be found at any grocery store. (I am in a minority here, but I do cook a lot, and I find TJ’s way overrated).

SAME! I’m an American living in London and I miss TJs SO SO much. And I absolutely disagree that other grocery stores have similar options (well maybe in the US…). TJs has so many creative, delicious, different food items that no other store has come close to. Not to mention the lower costs and some really good healthier options as well as lots of diet-friendly (ie gluten free like me) options! Will forever miss it!!!!

I hear ya. I haven’t been to a TJ’s in 2 years but used to frequent it multiple times a week. I’ve noticed that Target and Ralph’s (Kroger) have similar groceries now under their store brands (Good and Gather, Favorite Day, etc.) for sometimes cheaper costs. You have to dig a little bit sometimes but it’s there!

Found my favorite somewhere on IG. Red lentil pasta with the tomato basil hummus as a sauce and arugula mixed in. Yummy and filling!

There’s no need to cook the peas and the pasta separately for the boursin pasta. Depending on the pasta cooking time, you’ll need to figure out whether to throw in the pasta or the peas first and return to a boil before adding the other. One less pot to clean always makes me happy. You can also throw in some TJ’s prosciutto, which is pretty cheap but great.

Came here to say this! Frozen peas cook very fast so I usually throw them in with the pasta when it’s about 2 minutes from being al dente then drain everything together and toss with your other ingredients.

Seconding the idea of making this a regular feature! Please please please! These are all awesome, and I’m trying one tonight!

I “third” this suggestion (is that a thing?). These are absolute lifesavers for someone who is incredibly busy and doesn’t want to rely on take-out as much.

I am obsessed with the tune from the linked Trader Joe’s song (Antônio Carlos Jobim’s “Águas de Março,” a stone cold Brazilian classic that is fabulous no matter who covers it), and I am ESPECIALLY obsessed with versions that feature the cuíca, a fabulous percussion instrument that always sounds to me like a joyful balloon animal rubbing its forearms together.

Here are the lyrics in English:
https://genius.com/Antonio-carlos-jobim-waters-of-march-aguas-de-marco-lyrics

There are a lot of good comments on CoJ posts, with a lot of phrases that end up sticking in my brain forever. But “a fabulous percussion instrument that always sounds to me like a joyful balloon animal rubbing its forearms together” wins everything. Everyone pack it up, the contest is closed.