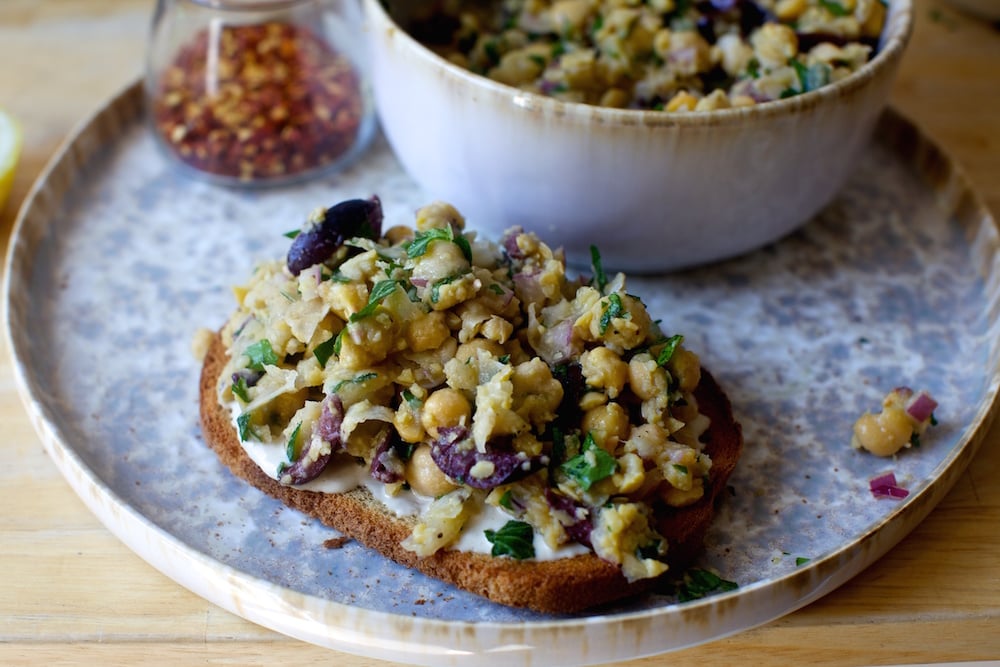 Deb Perelman from Smitten Kitchen always gets it right. Our very first food post was her lazy egg sandwich (so good!), and now she’s sharing her favorite sandwich of all time — with lemony smashed chickpeas. Here’s how to make it…

I take issue with the banality of most sandwich recipes. I will actually change the channel if I see a food program that walks viewers through making one of any kind. But it’s not the shows that are to blame, I think, or not fully: it’s the sandwiches. Most sandwiches are dull. Some sliced stuff and schmear between two uninspired slices of bread. Who can stay awake for that?

I got my sandwich mojo back a couple years ago, the first time I tried a sandwich from Tom Colicchio’s ‘wichcraft chain. My favorite has always been the simplest, or maybe the silliest to pay $7 a pop for: the lemony chopped chickpea sandwich, which is really a deconstructed hummus that I’ve been long overdue to make at home. I couldn’t believe how easy it was. I couldn’t believe how much better it was at home. I — the person who is so utterly bored by sandwiches, she would have stopped reading this post three paragraphs ago — have a favorite sandwich.

Mix everything but the olive oil in a small to midsize bowl. Very lightly smash the chickpea mixture with the back of a fork or a potato masher. You’re not looking for a hummus-like puree, but something closer to a coarse chop with a few smaller bits to hold it together. Add the glugs of olive oil, mix it lightly and enjoy.

This is also awesome as a sandwich on toasted bread, and it needs nothing else on it. But, if you want to doll it up, here are some ideas: A slice of roasted red pepper (as they do at ‘wichcraft), watercress (ditto), a slice of pickled garlicky red pepper (our way). We schmeared the bread with a tahini dressing, which was just tahini, lemon juice and a minced garlic clove thinned with water, but if you’ve got some harissa, I bet that would also be delicious. 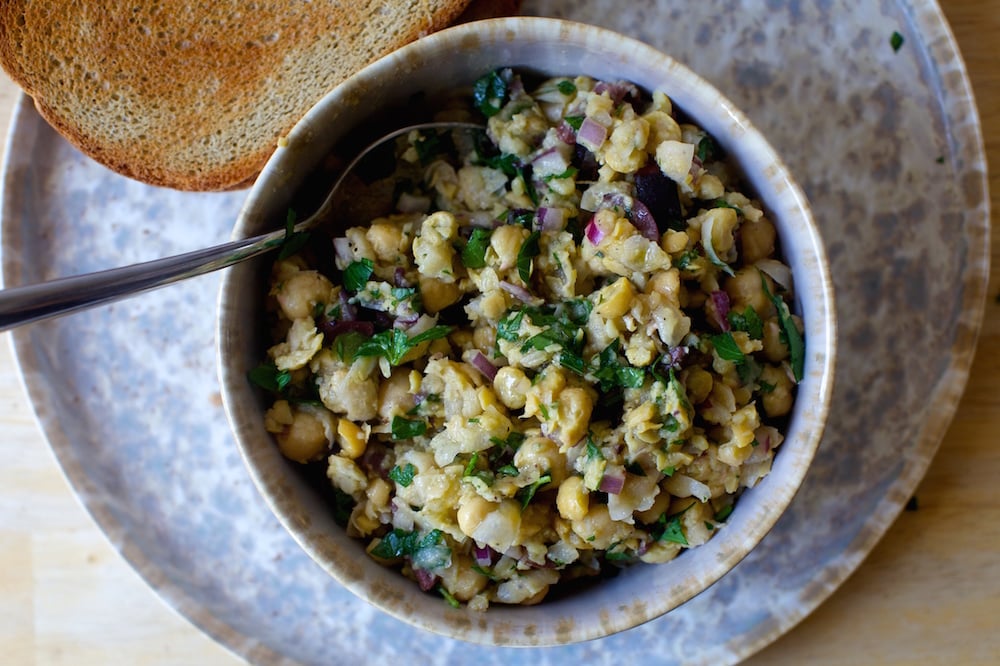 Yum! Thank you so much, Deb! Plus, here’s her bodega challenge!

(Recipe syndicated with permission of Smitten Kitchen. Thanks to Franny Eremin for helping with this series.)

Digging through old saved recipes during lockdown in Norway and came across this one – I added feta and some Tabasco jalapeño hot sauce for a vinegary kick. Ate it on Lepinja (Balkan pita) and it was phenom! Thanks Deb and Jo.

I could eat this every day!

In general I don’t comment on the results of recipes where I didn’t follow the instructions exactly, but this turned out so good even with some pantry limitations/substitutions! I subbed white onion for the red, and capers for the olives. Man, it was DELICIOUS! I doubled the recipe and served some with bread for an appetizer on Sunday, then made a lunch of the remainder on Monday and Tuesday. This will definitely go into my rotation.

oooo capers! i have some of those! i’l throw some in. thanks for the suggestion

I just made a version of this salad over the weekend and gave you a shout out ;) I spiced mine up and used green olives stuffed with sundried tomatoes.

this is super similar (but with harissa yogurt!) and it is one of my favorite lunches i’ve ever made myself: https://www.bonappetit.com/recipe/smashed-chickpea-toast-with-harissa-yogurt

This looks amazing! Been looking for some healthy lunch recipe ideas. Can’t wait to make it and try it out. Thanks for sharing.

i will definitely try this! It looks delicious + I am trying to eat more lentils, beans, etc.

This looks awesome. I’m trying to up my meatless meal game and find chickpeas to be a good protein to fill me up. I would also serve these as an appetizer on toasted baguette slices.

This made for a wonderful dinner!
Muchas gracias :)

I still make that egg sandwich! I just add sriracha, because obviously!

This sounds healthy and delicious, classic Smitten Kitchen! However despite my love for chickpeas, they don’t seem to love me back and often bother my stomach. Any suggestions for this? I’ve heard maybe rinsing or peeling them may help?

Making them yourself helps. Soak overnight in water with a piece of kombu (type of seaweed) as it helps break down oligosaccharides and makes it easier to digest! :)

Some people just can’t eat them; I don’t think it’s to do with preparation. I wonder if there are other things that trouble your stomach – have you looked into the FODMAP diet? My husband started it after years of inexplicable stomach pains after eating certain food (he saw a dietitian) turns out onions and garlic (which we love) were a big no-no for him, along with many other, seemingly random things! Pulses being one of them!

SAME and soaking beforehand can be a game-changer! I’d say overnight for chickpeas given their size. https://www.drweil.com/diet-nutrition/anti-inflammatory-diet-pyramid/cooking-with-beans-legumes/

I love this recipe! I bring it for lunch frequently. In the morning I toast whole wheat ciabatta (from Trader Joes), spread it with mayo and harissa, and then assemble the actual sandwich at lunch time so it doesn’t get soggy. I usually bring a container of arugula or another green for a side salad, and just toss some extra chickpeas on that to dress it after I make the sandwich. Healthy & delicious – definitely not a sad desk lunch!

….as I stare at my “sad desk lunch” haha. Dang I gotta put this on the rotation!

Yes on mayo and harissa. I love WASA crackers if you’ve not tried them yet for work sandwiches because they are already crispy!

Sounds incredible!! I am so excited to try.

I just had this for lunch! Definitely a keeper.

I pretty much trust anything and everything that Deb does (and have both of her cookbooks on my kitchen counter). The only other two are Sprouted Kitchen – and in one of them is a recipe for ‘Deli chickpea salad’ which is similar to this one but no olives or olive oil and instead celery and gold raisins and parsley and chives and mayo. I literally just made it 5 minutes ago and am eating it now. https://asideofsweet.com/chickpea-deli-salad-from-the-sprouted-kitchen/ It’s great on toast or crackers or in a Buddha bowl. I’ll have to try Deb’s next time tho.

We’ve had to do a bit of a culinary overhaul in our house since my husband was diagnosed with hypertension last month, and I’m constantly looking for delicious plant-based recipes so that we don’t get bored with salads. This looks amazing! Can’t wait to try.

nope, you can leave them on!

Chickpeas are a nutritional powerhouse and super versatile.
One of a vegan’s best food friends, these legumes are cheap if you buy in bulk, cook them in the crockpot, save the liquid (“aquafaba”), and make into a hummus much more delicious than any you buy in the store.

One of my go-to recipes is one similar to this; dice up celery, onions, and carrots (this is a “mirepoix”), mix with vegan mayo, add whole chickpeas, spread on your favorite bread. Et voilà, a delicious and healthful sandwich!

That sounds delicious and I’m totally going to make it, but to clarify, a mirepoix refers to those chopped ingredients, which are cooked and then used for sauce or soup.. different kind of delicious!

THIS IS MY FAVOURITE. I make this recipe often and it always satisfies me! The lemon zest definitely makes it brighter, don’t skip it :)

I’ve become *known* for the lazy egg sammy in my family that I have been making since that post SEVEN (!?) years ago – it’s SO good! This looks like a strong contender for another easy meal to woo my loved ones with! Cha-ching baby.

This looks amazing! We need to try this asap!

Making this tonight for a late dinner! Sounds like the perfect gem, especially when I start craving something bright and healthy but filling like comfort food.

However, is leaving out the black olives going to change the taste much? I am allergic (but not to olive by-products…. go figure.)

Hi Elizabeth! I’m not Deb but I have made this chickpea salad before (actually to go with another Smitten Kitchen recipe from her first cookbook, which I highly recommend!). I left out the olives because my partner doesn’t like them and didn’t feel it was missing anything, but I did add a splash of red wine vinegar to make up for the lack of brininess

It will change the taste but I can’t imagine that it’d be bad without! Just different. You could perhaps add capers for the same salty/pickled flavor that olives bring, but capers are brighter and more acidic than olives.

I would either omit them, or if you want a briny burst of flavor that’s similar maybe add capers?

Elizabeth, my husband abhors olives so I’ve made this wonderful recipe without and it’s still 100% delicious. If you need a little salty kick and like cheese, you could always sprinkle a little feta!

Could you add something else salty? Anchovies? Capers? I expect it would be nice to have the contrast with the salt.

I love this sandwich and occasionally sneak in some capers. They might be a good olive substitute!

I hate olives. Chopped sun dried tomatoes (in oil, not dried) are a nice substitute. They add a little umami. Might need to add a bit more salt, too.

What wonderful ideas for subs! Thank you! I will definitely try a variety of these out :)