A Week of Outfits: Anton 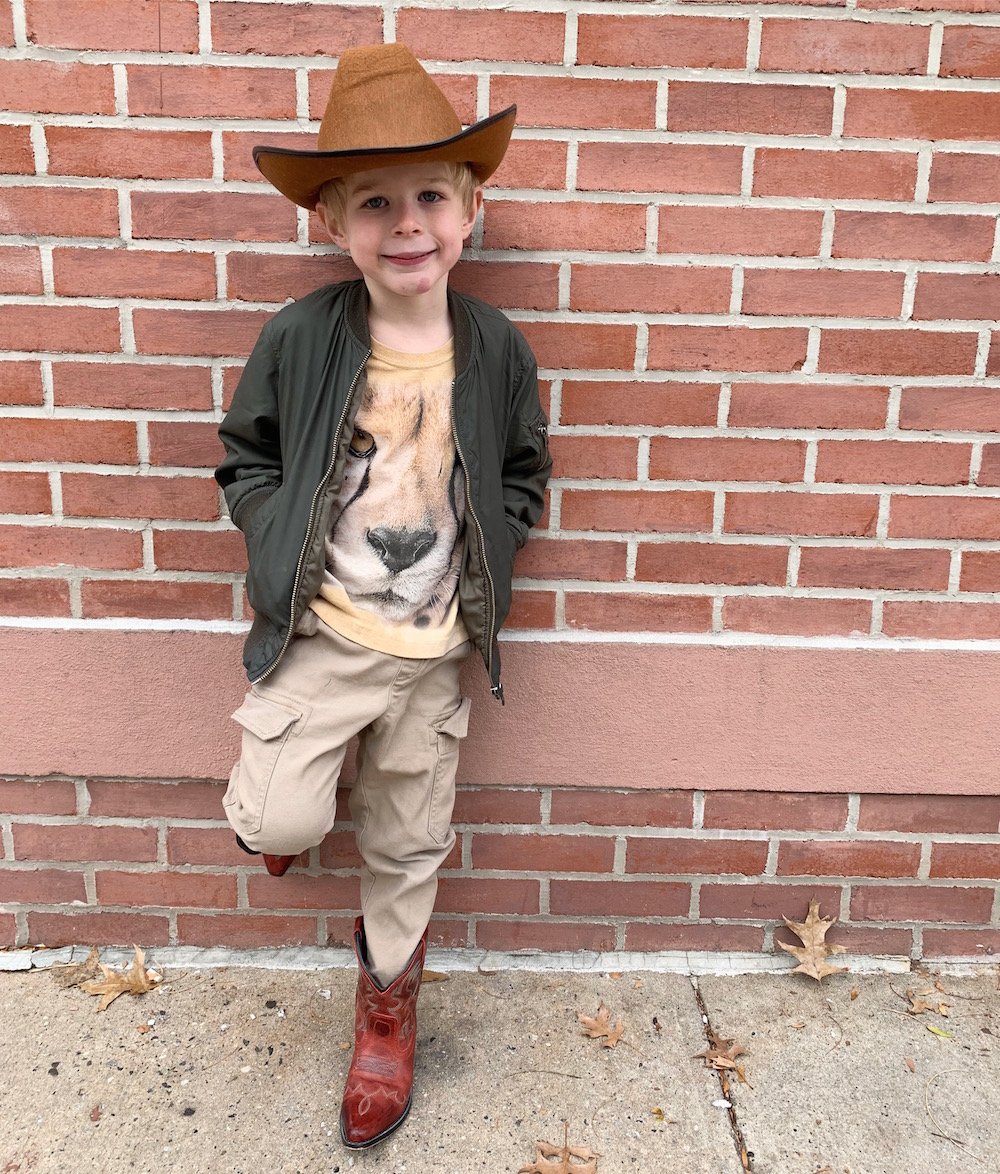 Now that Anton is 5 1/2, he has gotten into defining his own style — from cowboy hats to shark tees. His approach matches his animal-loving, rough-and-tumble personality, and he was excited to take some pictures. Here, Anton shares five go-to looks (and some shark fun facts!)… 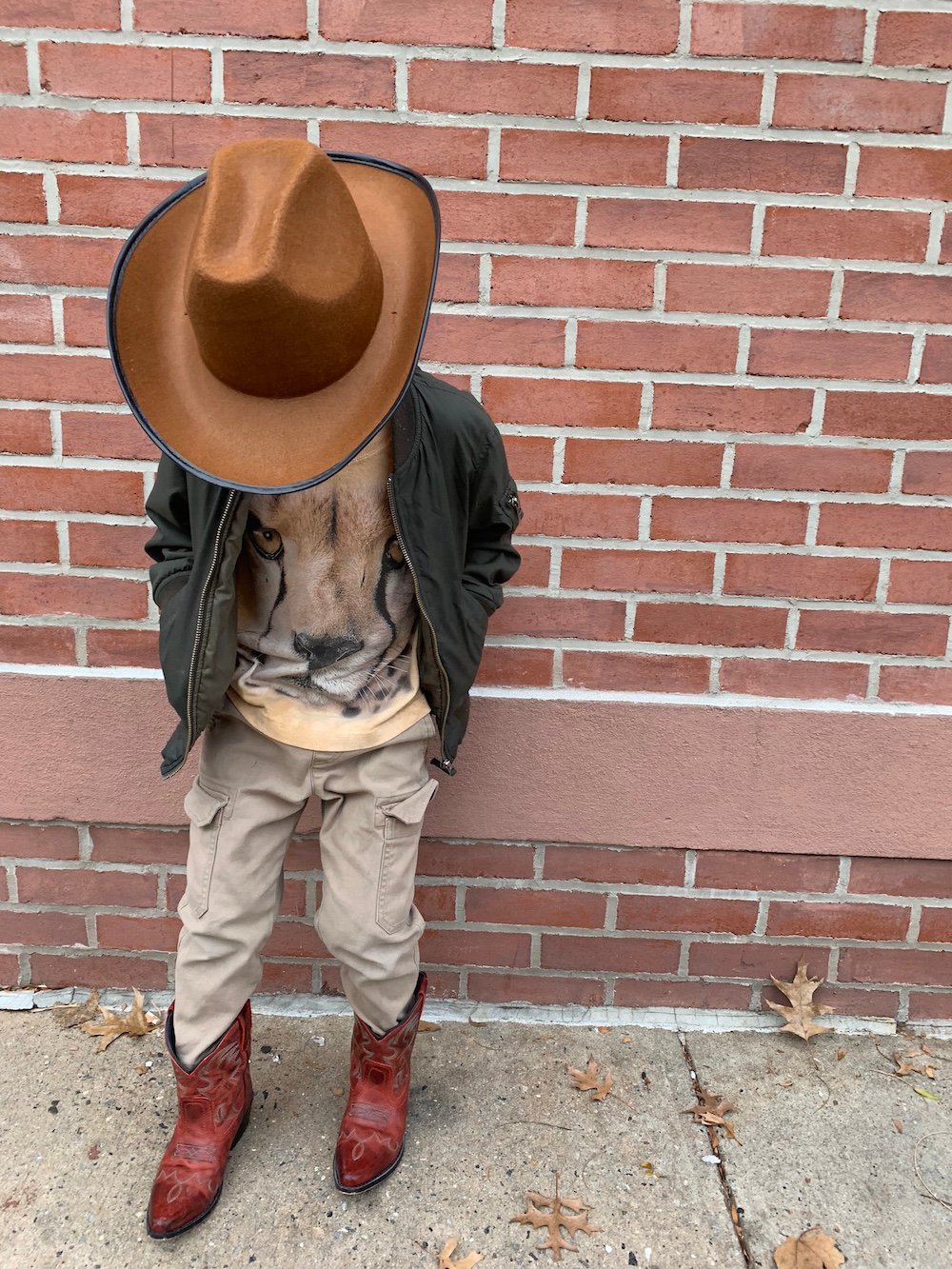 “I got this cowboy hat for Halloween. You can carry things on it. At the grocery store, I put oyster crackers in it for a second. This is a cheetah shirt. Everyone thinks it’s a lion. But it’s a cheetah. They’re the fastest runners.” 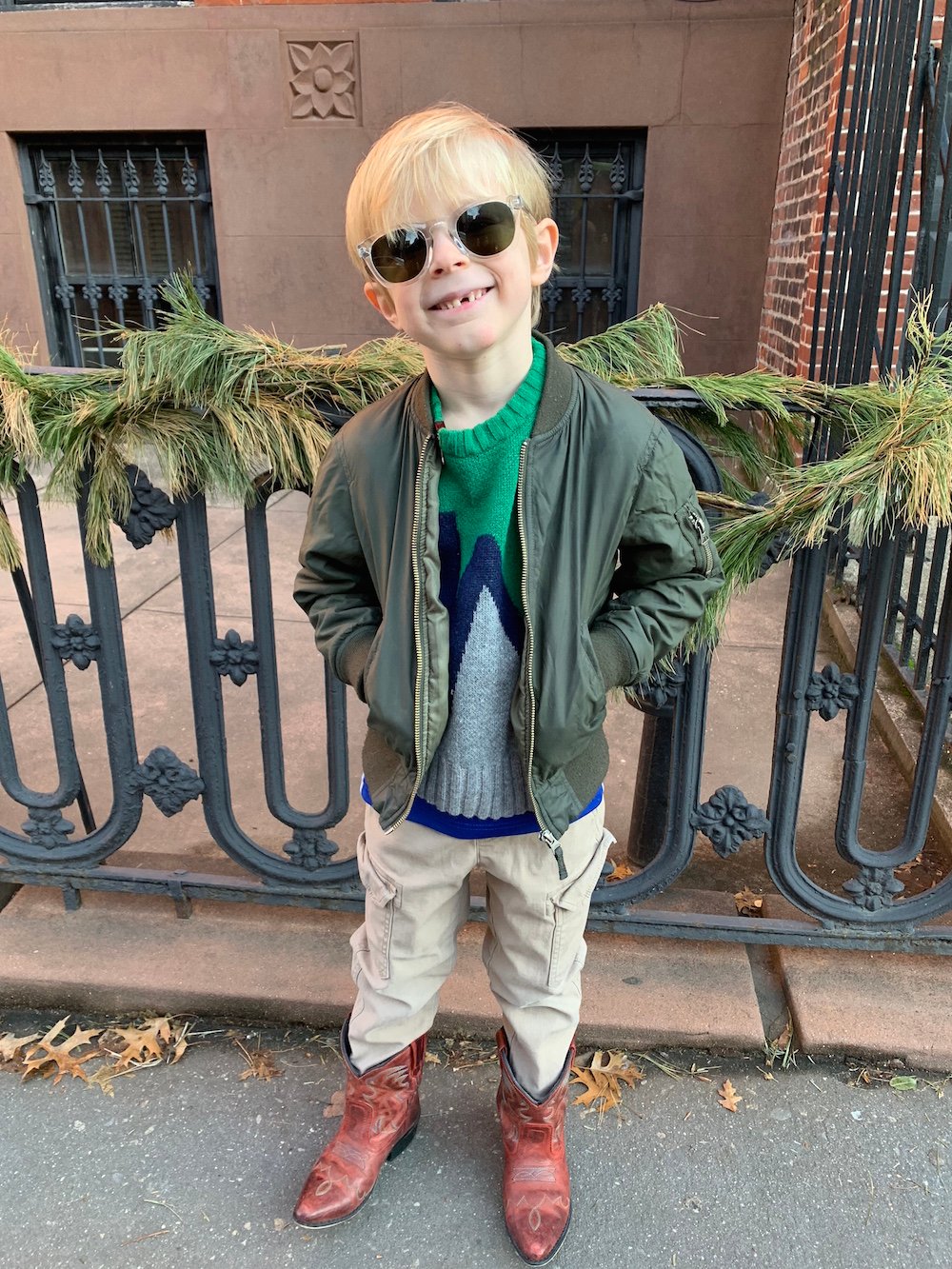 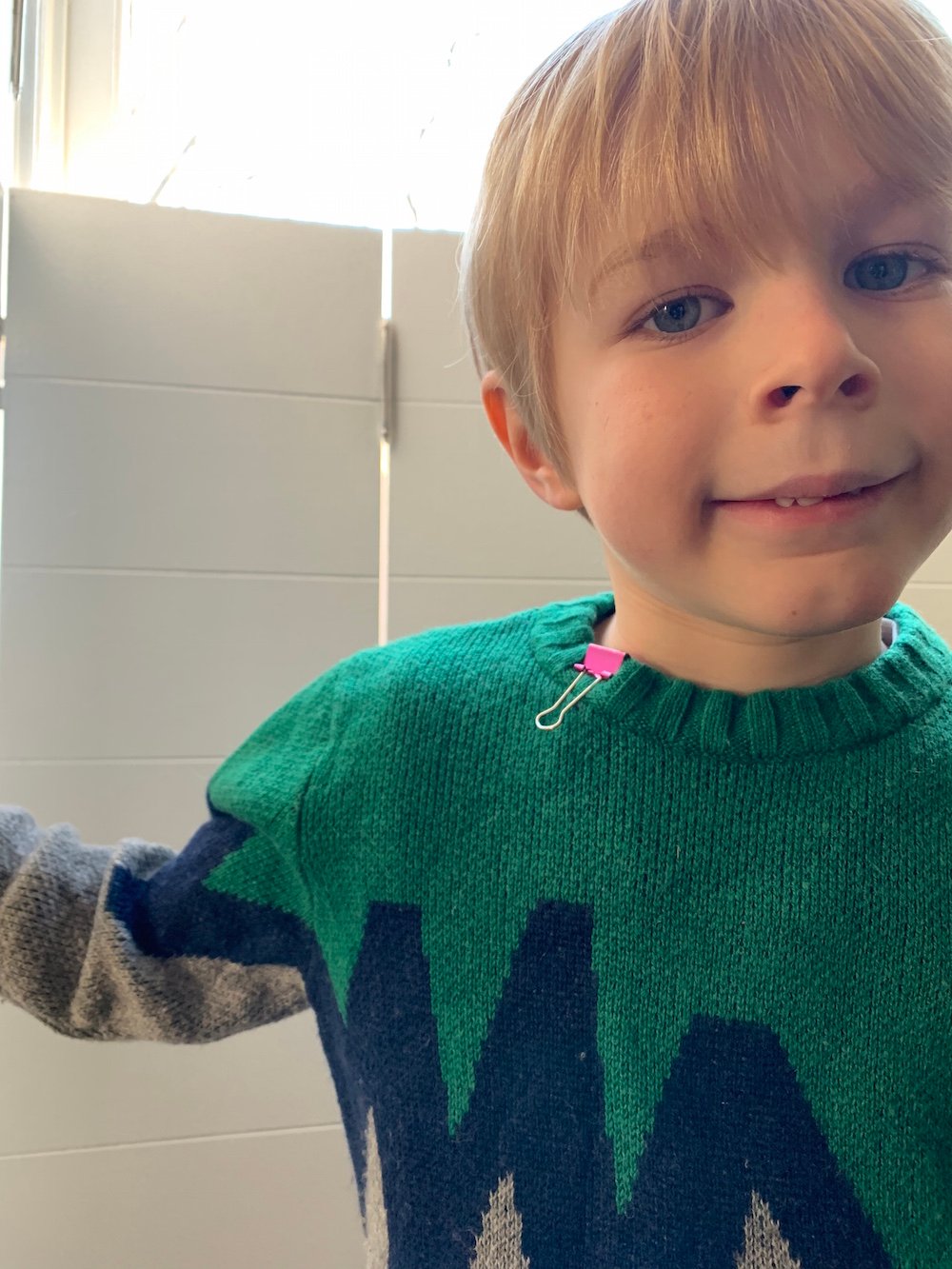 “My friend gave me this clip at recess. I put it on my sweater. People can put things on their shirts.” 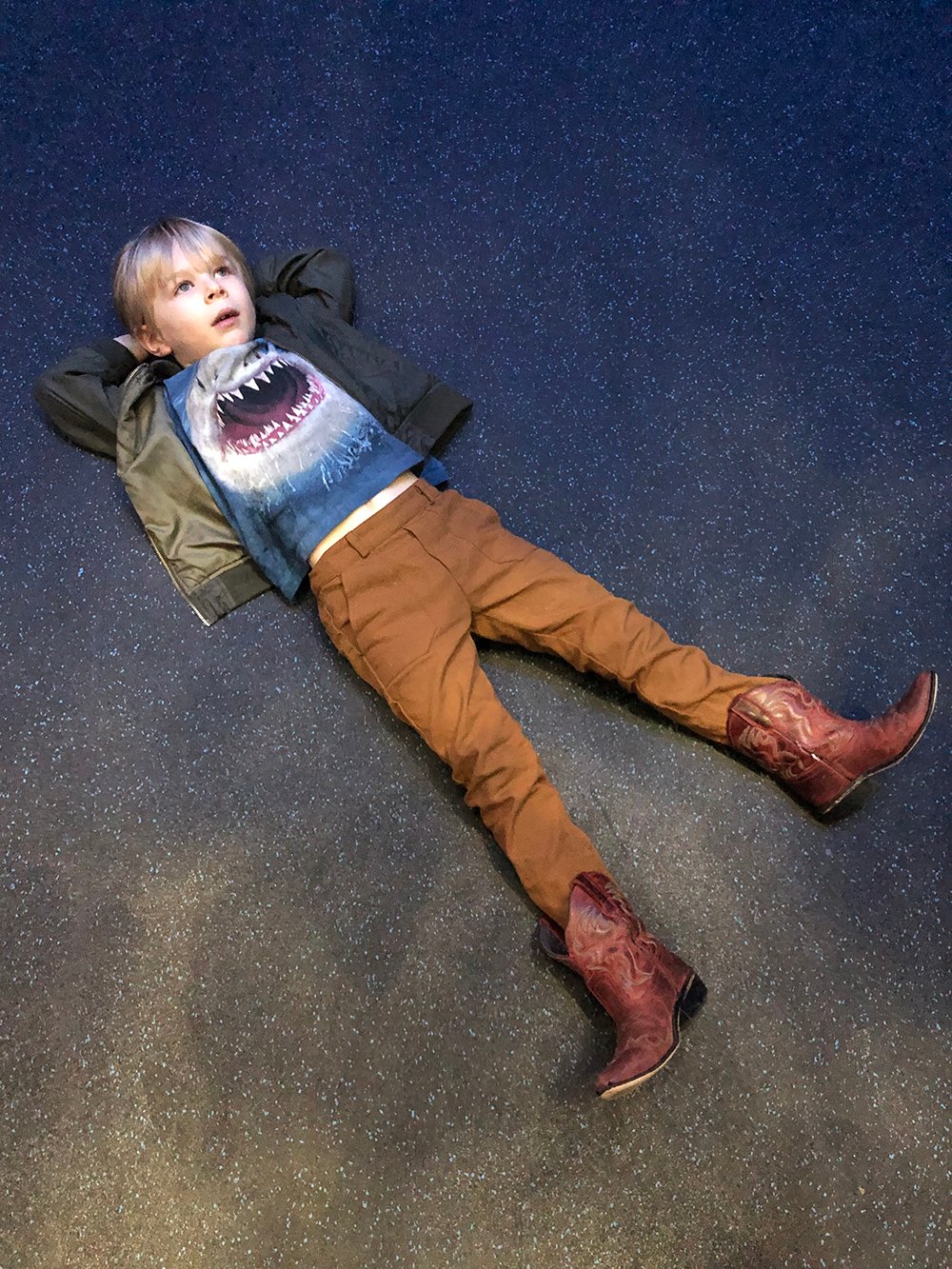 “Here, I was looking at the ceiling at the aquarium. There were pretty lights and pretty stars. There are whale sharks there. I love sharks. Dad let me watch part of Sharknado. I told my friends that my T-shirt has a picture of our pet shark. Maybe don’t tell them we don’t have a pet shark. ” 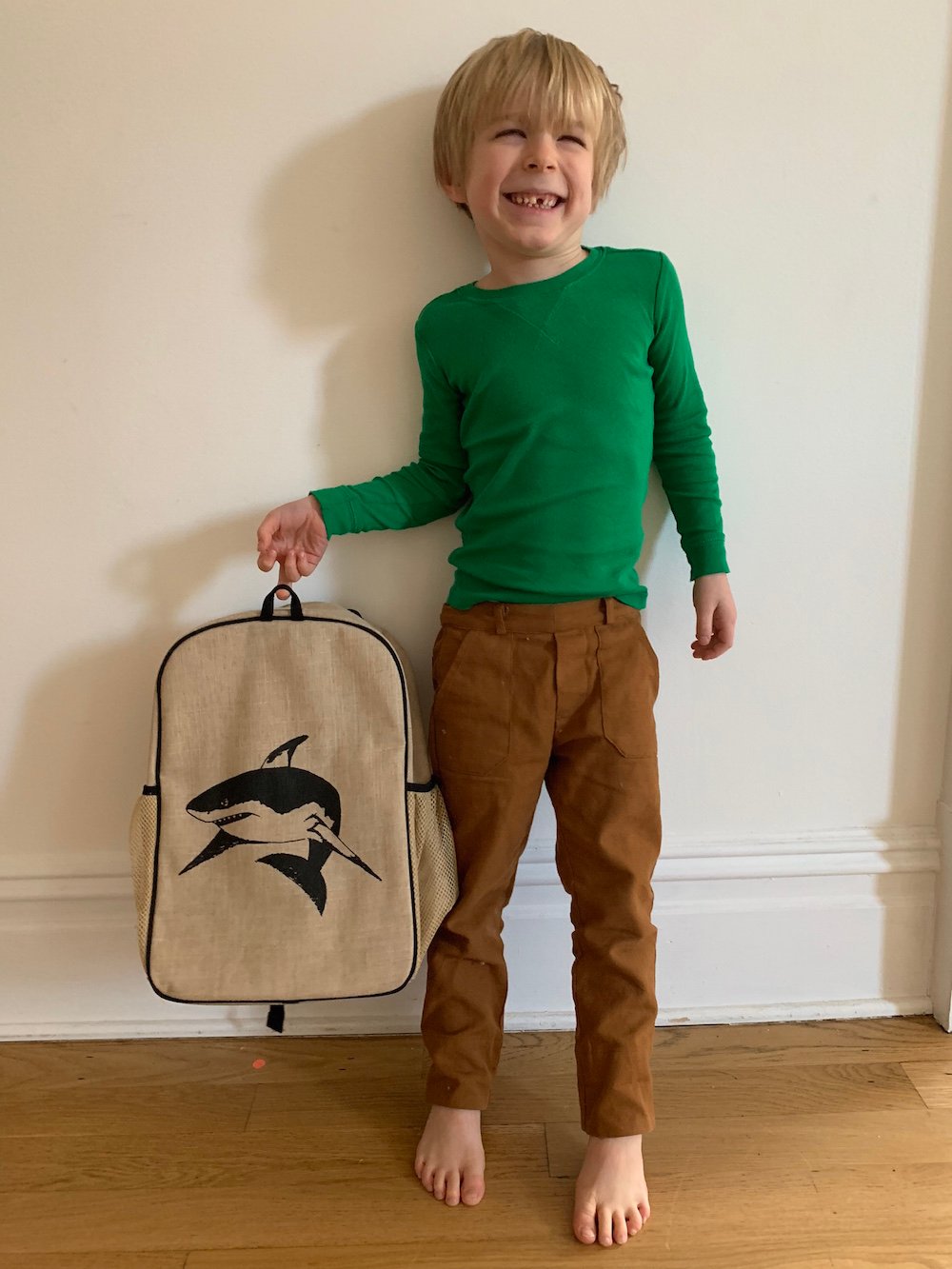 “Green is my favorite color. I like this shark backpack. I like how sharks have dark eyes, almost black. If they’re deep in the ocean, they can still see. But you couldn’t see them. You would have to get out of there.” 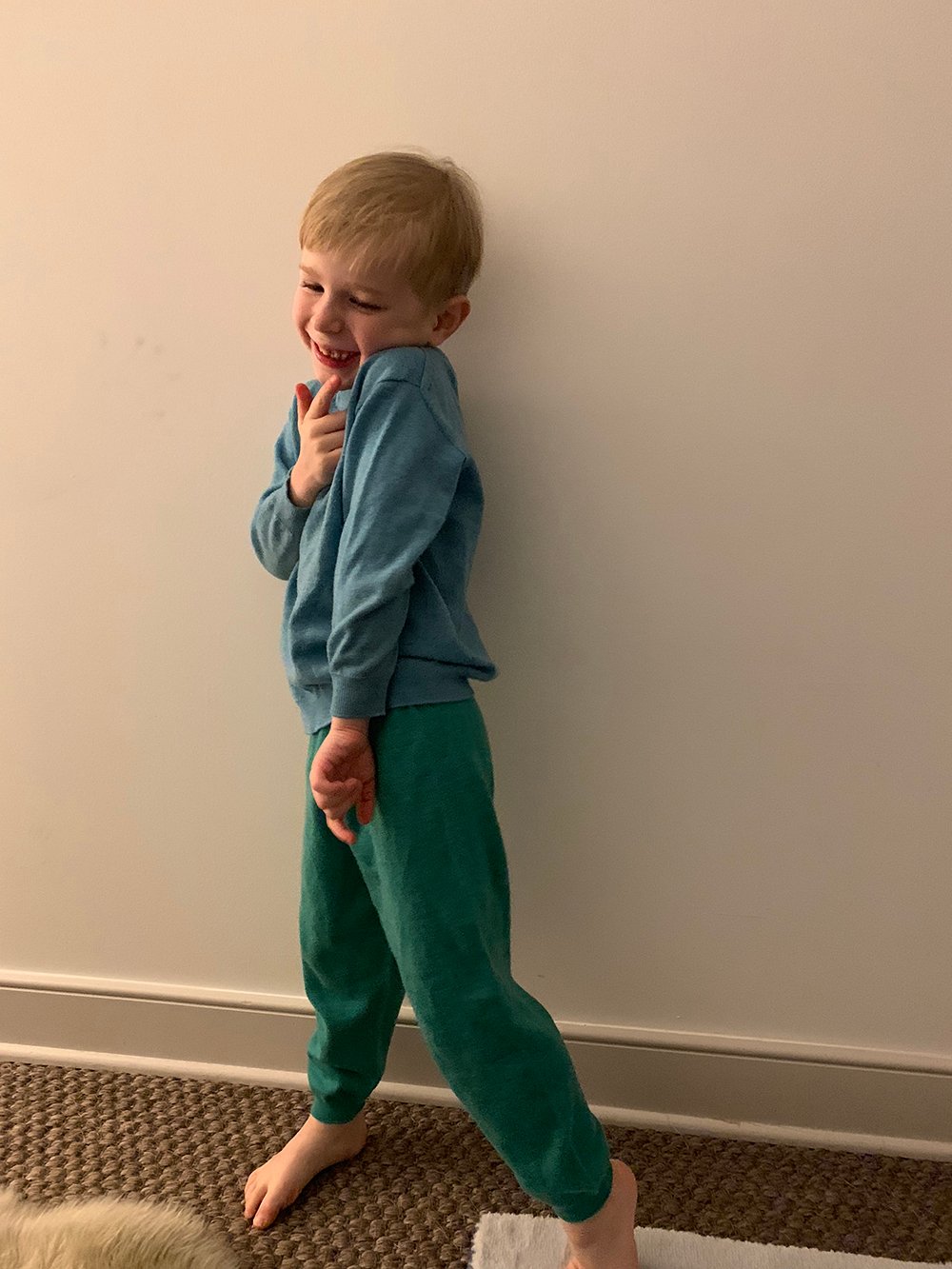 P.S. Talking to kids, and more weeks of outfits — including Toby’s! :)

Tags: anton, toby and anton in conversation
266 COMMENTS
WRITE A COMMENT
Style
most popular
01
A Week of Outfits: Naudia Jones
02
My Beauty Uniform: Samin Nosrat
03
My Packing List for England
04
12 Readers Share Their Meaningful Tattoos
05
The Best Sneakers for Long Walks
May We Suggest…
By Joanna Goddard
Motherhood
“Does The Universe End,” And Other Casual Questions from a Five-Year-Old
June 15, 2020

Catching up on my CoJ after having a newborn and Anton’s last sentence has me welling up…love how much he connects to his dad. I have two boys ( and now a baby girl!) and I see our younger son, also 5, see my husband in the same light. It’s so precious. All the more so, because my husband’s father wasn’t interested in being a father. There wasn’t a role model for him and seeing how much he loves being a dad is truly a joy. Oh hormones, you struck again! ha!

A child’s perspective is magical.

This is perfect. “People can put things on their shirts.” Inspired.

This is the cutest and made me smile!

Anton’s quotes are the sweetest. I giggled all the way through them.

Ahhh. That was awesome! Do one with my daughter! She is the same age as Anton and I would love to see what she puts together and says. :)

Love it. I have a shark-lover as well. If we don’t have any clean shark clothes, or dinosaur clothes, there are problems.

I was visiting NYC when you posted this, and all I had with me was my phone, so I had to save the post so I could see it full screen and do it justice. Stylin’ Anton!!! (Green is my favorite color also)

He’s a hoot hoot hoo hoo hoot! And so stylish! Thanks for the peek into your world, Anton.

What a cool dude. Those outfits would look right at home on a rock star.

My heart.. my ovaries… thank you, Anton, for making my day!

Kids are just the coolest! You rock, Anton!

“Maybe don’t tell them we don’t have a pet shark. ”

Love this post! I had me walking down memory lane with my boys….got to love a boy in boots!!!!

Anton, you are so inspiring. People CAN put things on their shirts indeed! I just might try it.

This is FOR SURE the best, most inspiring week of outfits! Effortlessly cool.

Omg Anton is so big now!!! This was my favorite week of outfits. The green and rust is so my colors! Those boots are amazing!!!!!! Sharks are equally amazing!

What a sweetheart. He will love reading this when he is older. I don’t do any blogging but I try to write down quirky little things my kids say or do on my wall calendar. Instead of just stuff like “dentist appt.”

“I don’t know, I just know.” DYING. And that second outfit is a lewk! My girl is about to turn 5 and my heart breaks because 4 has been SO FUN. But this reminded me that every age holds so much magic. Thanks for sharing your darling boys with us.

I love everything about this. Thanks for featuring Anton!

OMG “My friend gave me this clip at recess. I put it on my sweater. People can put things on their shirts.”

OH MY GOD how has this not happened sooner?!?!?!?! This was ADORABLE. Thank you Anton for sharing!