A Week of Outfits: Toby 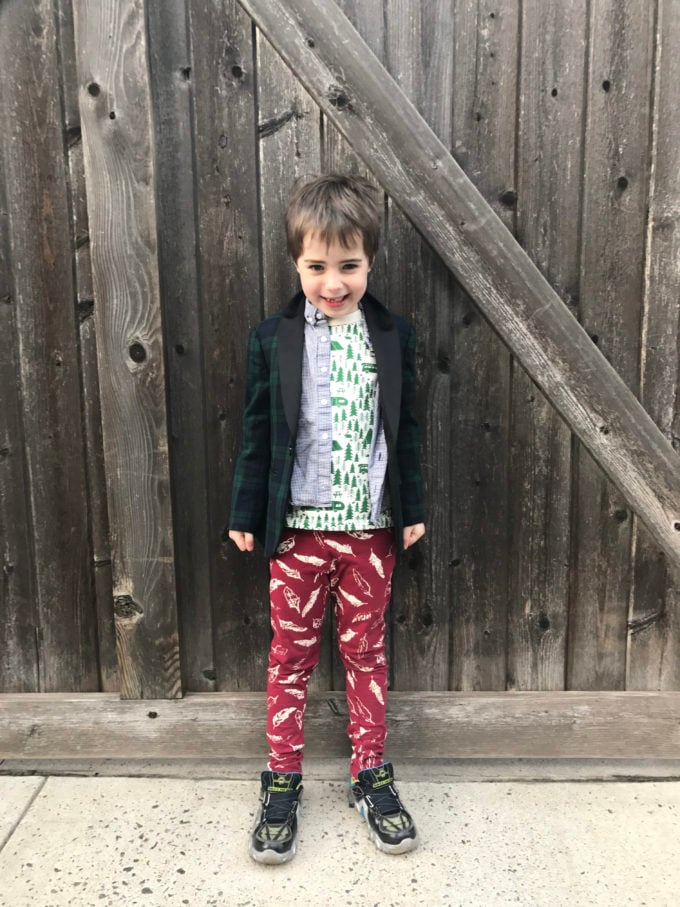 For his entire life (6 3/4 years and counting), Toby has been a fashion maven. He loves mixing prints — “I know my style, Mama,” he often tells me — and he even asked for a sports jacket for his fourth birthday. So, when Toby overheard that we did a series called “Week of Outfits” on the site, he begged to do one of his own. Without further ado, here are five ensembles that Toby wore in a week… 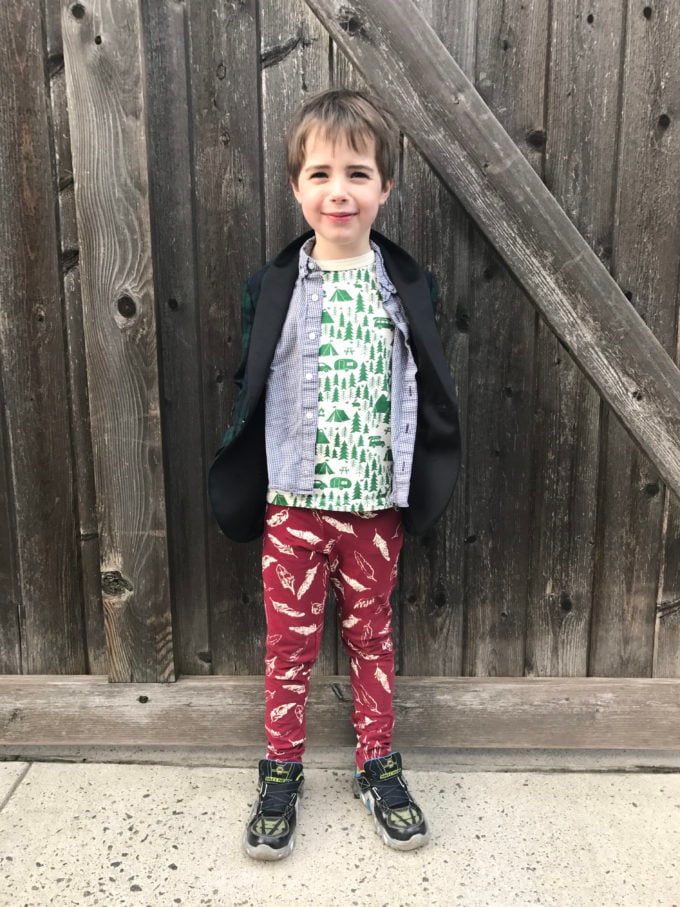 “We got these pants because we forgot pants at my swimming class. I like these leggings; they have leaves from a tree. It’s cool to wear different patterns. I have a new haircut. I got Simon as a haircut present. I’ve been practicing.” 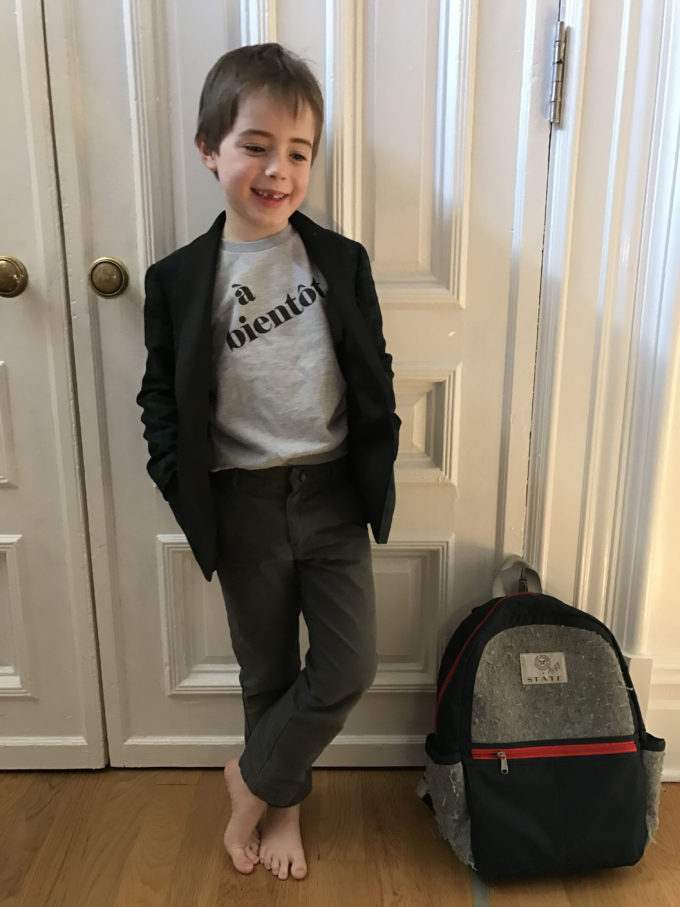 “I like blazers because it’s like a grownup. I like wearing layers. I know my style — I just know. Sometimes I pick out clothes for Anton ’cause it’s nice. I picked out his shirt this morning.” 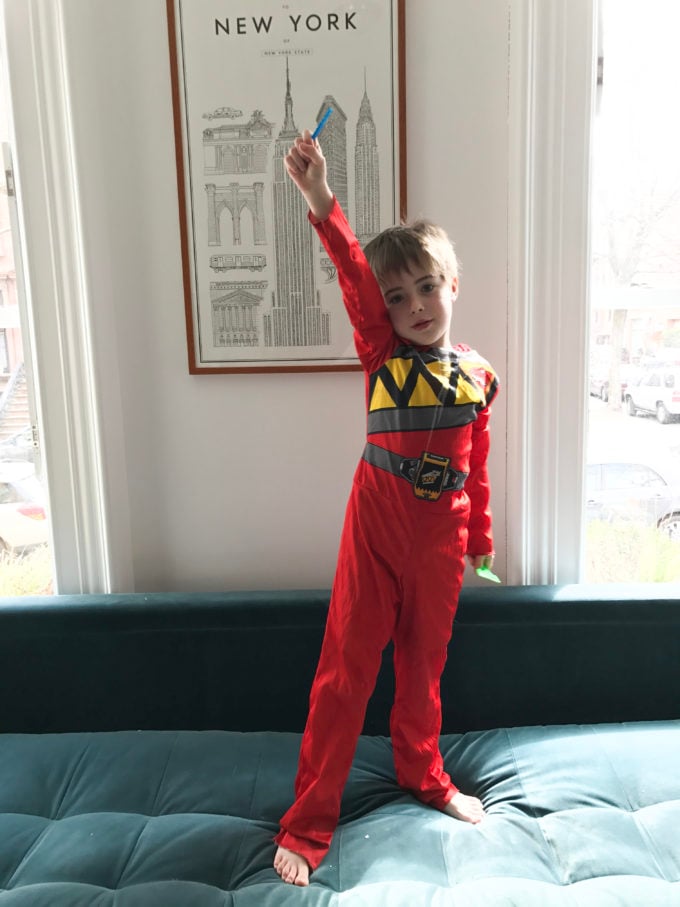 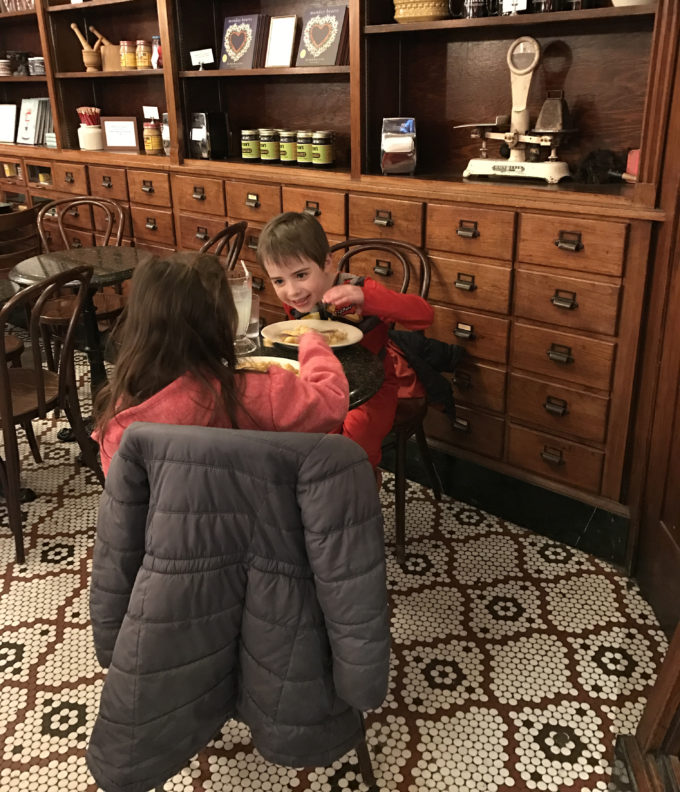 “This costume is Tyler, the red Dino Charge Power Ranger. I wore this on Halloween, and I wear it on weekends. I’m not allowed to wear it to school, only when it’s Costume Day or something. I wore it on a date last night. She thought, cool.” 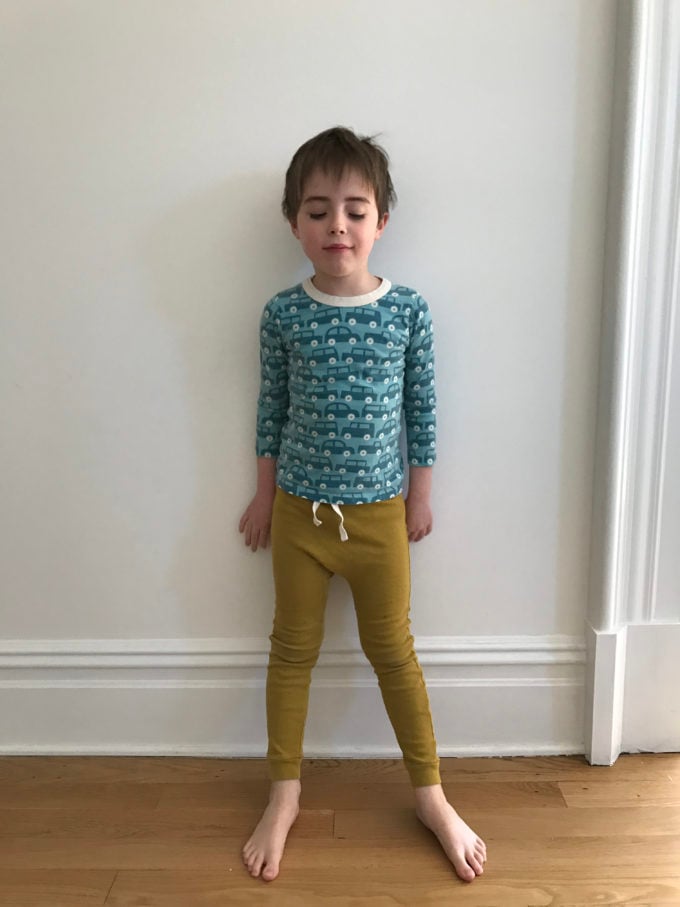 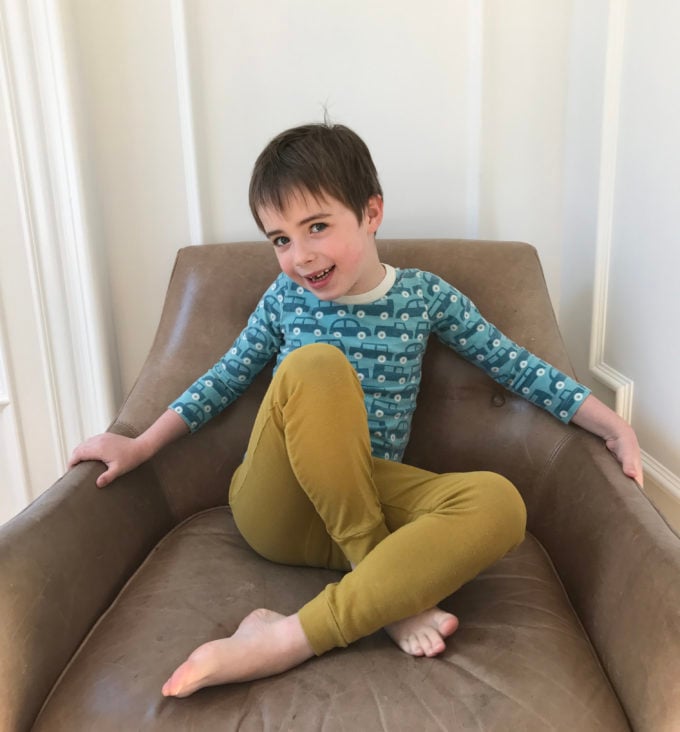 “I like the cars on this shirt. Cars are awesome because they are cool. I know Volkswagen, Nissan, Toyota, Jeep, Hundai, Honda, Chrysler, Ford and GMC. I wore these kinds of pants since I was a baby.” 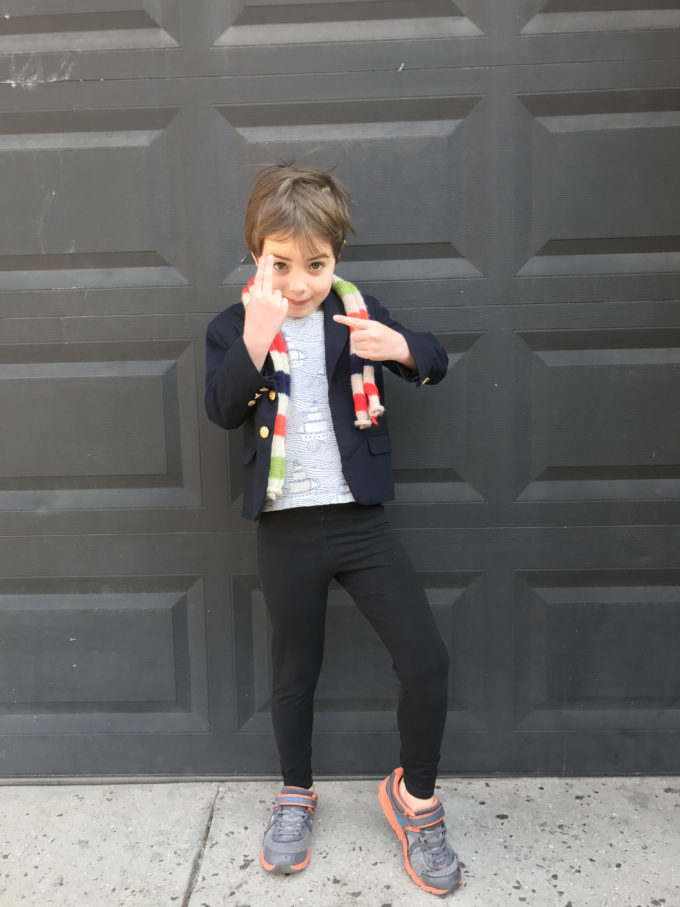 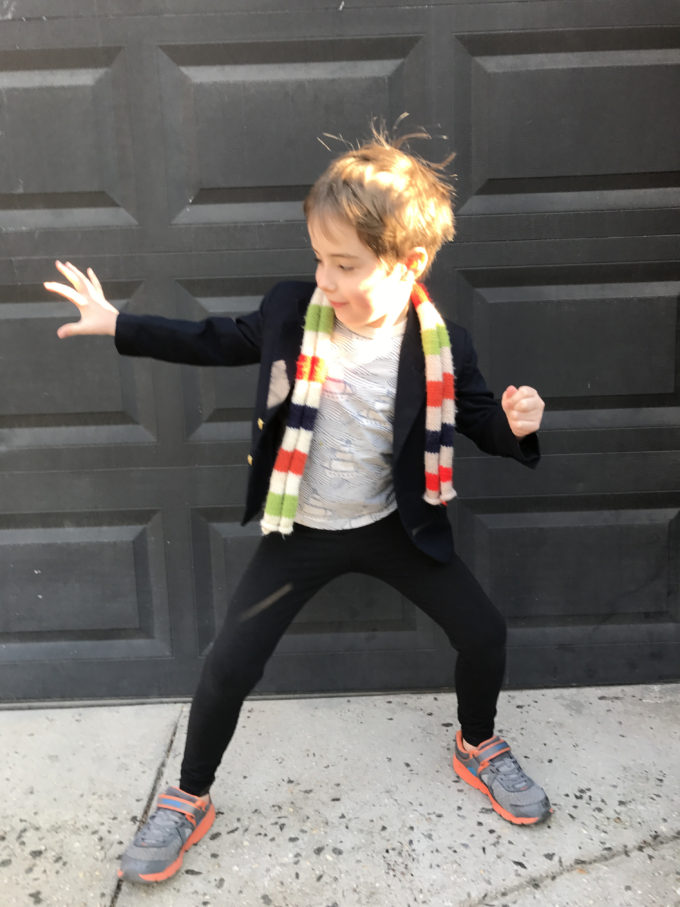 “I like this blazer because it looks awesome. The buttons are gold, and gold is my favorite color. I wore the blazer in Aunt Lesley’s wedding. Leggings feel better than pants. We’re having Nutella toast for breakfast this morning. I’ve never had Nutella. Only once. For my birthday.”

P.S. Our real week of outfits series, and Toby and Anton in conversation.

By Joanna Goddard
Motherhood
A Week of Outfits: Anton
February 11, 2019

Love the confidence this little guy has and all of his super outfits!

I adore how comfortable he is in his own skin and knows himself. What an amazing kid!

Just found this as I was reading today’s week of outfits and I felt compelled to tell you how much it brightened my day. When the world seems like it is going to total shit, people like Toby (and obviously his parents) really remind you that there is joy all around us, if we look for it. I hope we can all wear our most powerful outfit on a date and have our partner think “cool!”

This is the best and I love Toby’s sense of style. I wish he could help style me!

Argh he is so cute! I can’t wait to see my daughters style emerge! I very much second (and third and fourth) the idea of making kids week of outfits a regular thing! X

I need Toby as my stylist!

I just came across this and wow. I could not love little Toby more! Thank you for this. It just made my day.

“leggings feel better than pants”
Right on, Toby! That was amazing. I would love more kid outfit posts! Maybe collaborate with humansofny…

I realize I’m really late to the party, but DANG, the whole post is so freaking adorable and awesome! Good for Toby, knowing his style! I especially love the dapper jackets, he’s such a gent and a true original.

“I wore it on a date last night. She thought, cool.” AMAZING! I will follow his fashion Instagram when it comes out. Or whatever Instagram is in the future…

“She thought, cool.” Heehee, such a cutie!

I think I just died from cuteness! Toby knows his style and he’s great at it ! As he gets older , it will become even more defined. I think he grabs ideas from the environment and people around him. Ah reminds me of my nephews and nieces who grew up and their style just evolved! As I say to my niece , you went from glitter tutus everyday to glitter skinny jeans. Your style defines you. Build it now and embrace and add forever. Did I mention that one nephew has gold Nikes! I’m the influence that rubbed off on them lol

This is so funny! – He has wonderful style!!!

This is actually THE cutest post of all time! I am dying. So cute. Thanks for sharing. Toby is the coolest!!

My favorite post so far! Toby needs to be a regular. He a natural and so insightful. I loved this!

Dying! Joanna he is a dear. I only hope my two little boys grow up to have their own sense of style just like Toby does.

Toby has incredible style – this is one of my favorite posts you’ve ever done. Kudos to Toby!

Oh my gosh can we make kids’ Week of Outfits posts a thing? This is amazing! Way to go Toby!

He rocks!! I think I need to stock some blazers for boys in my shop! Did not know how cool they can look. Thank you Toby!

This is one of my favorite Cup of Jo post to date. Thanks for sharing! And thanks for being awesome, Toby.

This just made my day. He is SO cute, and reminds me a ton of my son. He even has the same winter water factory cars tee and mabo pants!!!!