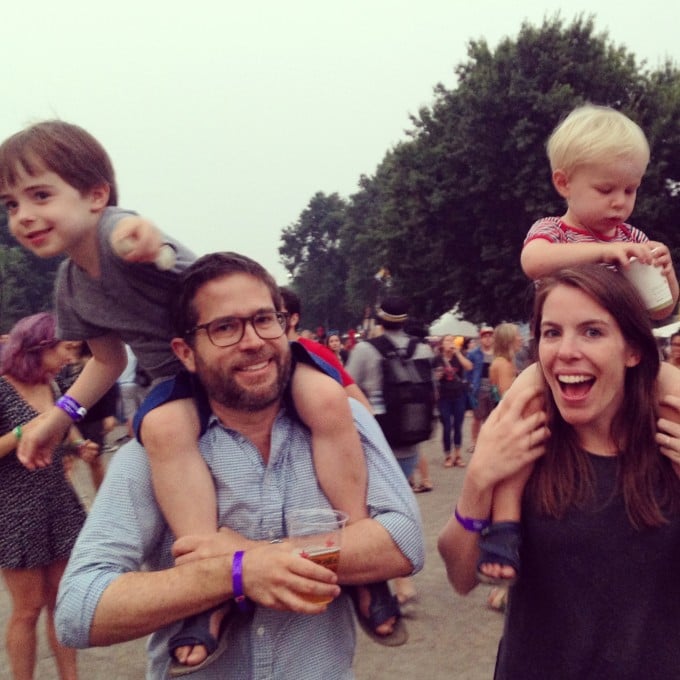 As I’ve mentioned, we just got back from a weeklong trip to Oregon. Man, that state is gorgeous. Everyone is insanely friendly, and you can’t have a bad meal if you try. Here are a few photos, if you’d like to see… 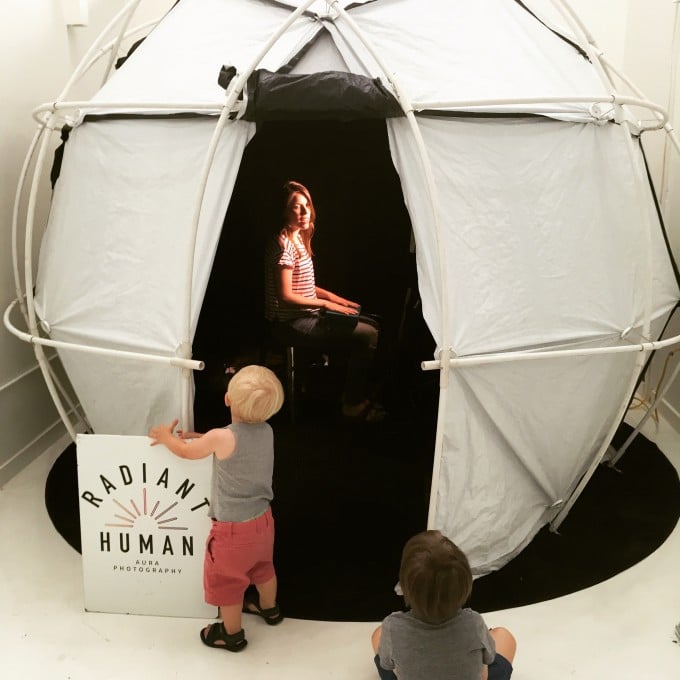 One of our first stops around town was Radiant Human, where a photographer takes a photo of your aura. It was a trip! Alex was mostly blue, which means “Depth of Feeling, Trust, Devotion, Loyalty, Nurturing, Personal Relationships, Supportive, Intuitive, Sensitive,” and I was red, which means “Strength, Will Power, New Beginnings, Leadership, Action, Practicality, Passion.” 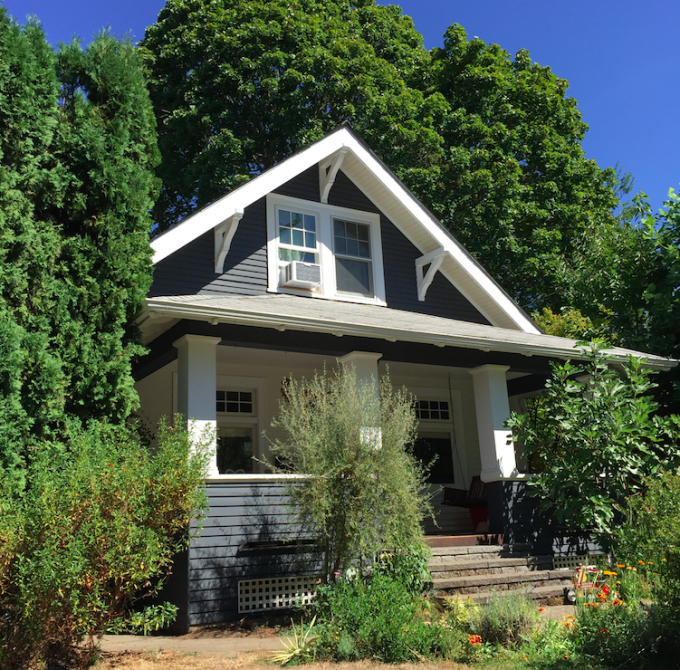 We rented an awesome house that was super comfy, with three bedrooms and a porch swing where we spent 99% of our time. 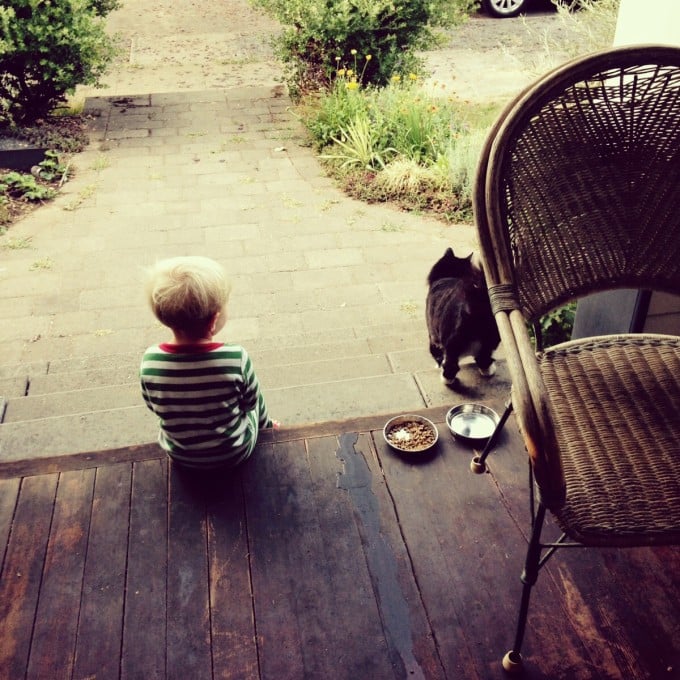 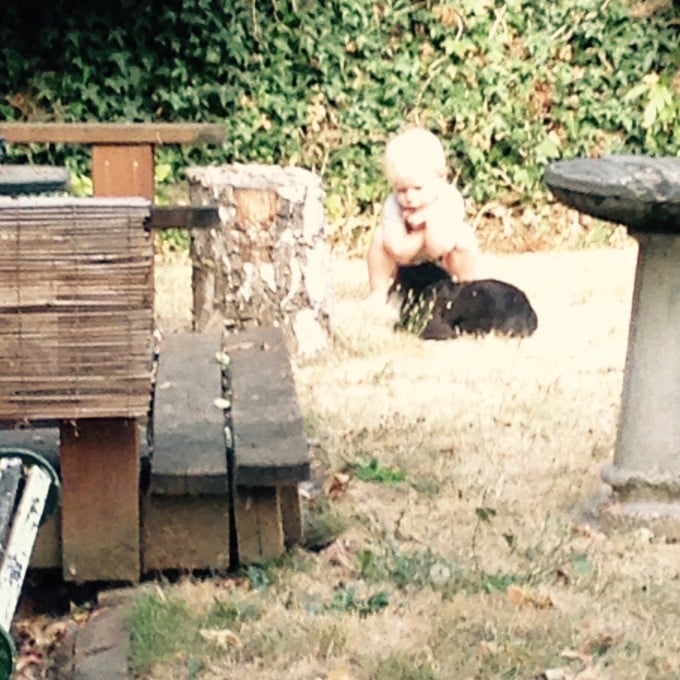 They had an outdoor cat, which Anton completely fell in love with. He called him “my cat” and re-named him “Motato” (rhymes with potato). Like the gentle soul he is, Anton would simply sit next to him and enjoy his company, only reaching over to pet him now and again, when he felt the cat was ready. 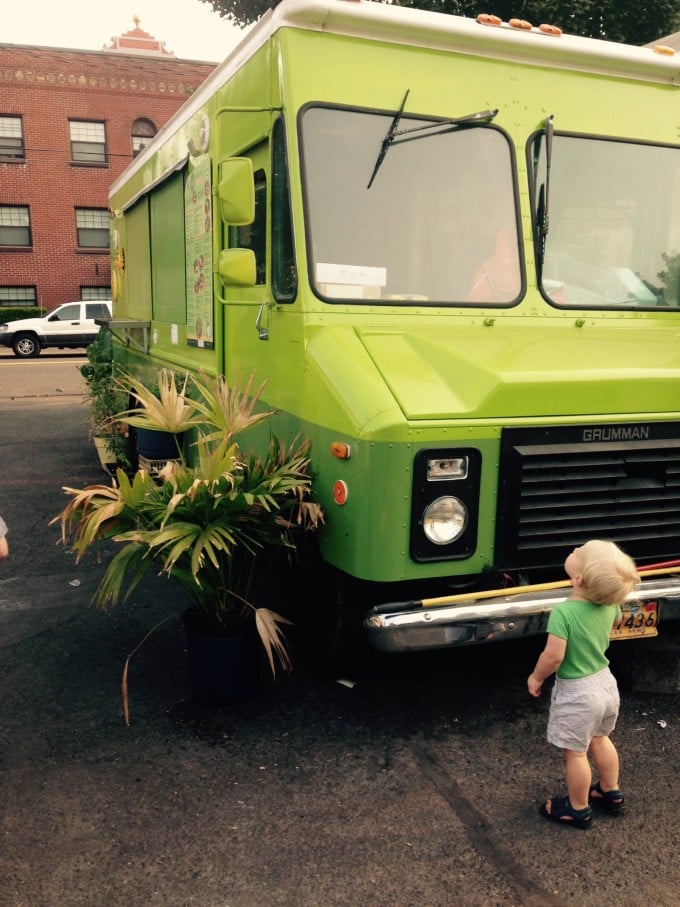 Right down our street, just a block away, there was a giant lot filled with food trucks — Mexican, Middle Eastern, Scandinavian, whatever you wanted. 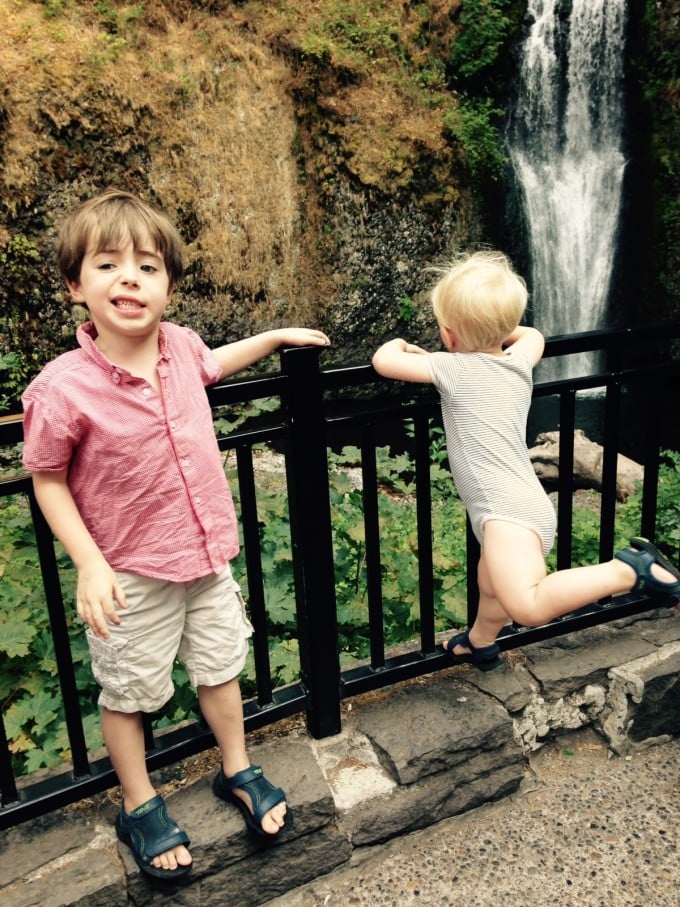 Each day, we’d go on an adventure to places like the zoo, downtown, or Multnomah Falls, pictured in the frame-worthy shot above, haha. 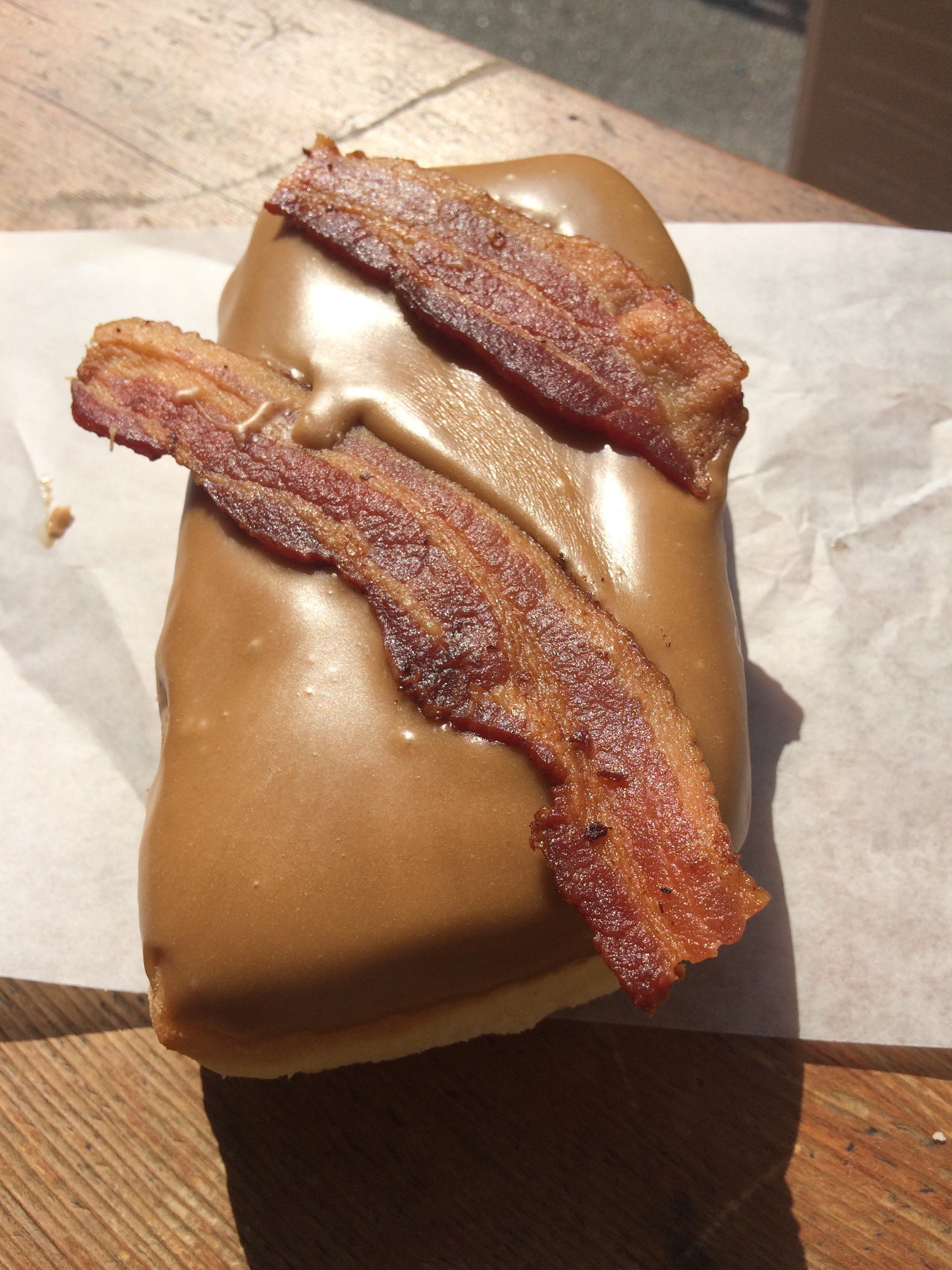 On everyone’s recommendation, Alex went to Voodoo Doughnut for this Bacon Maple Bar! 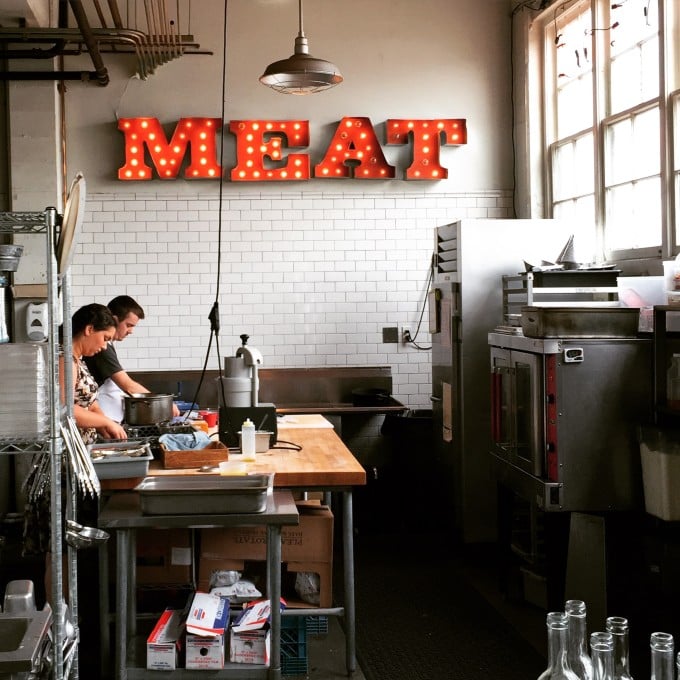 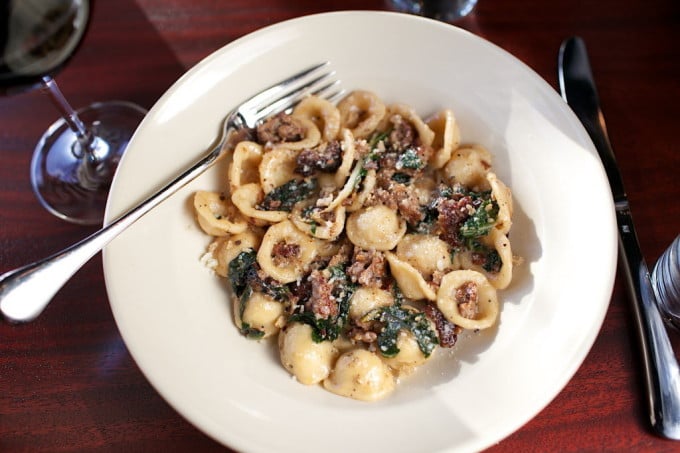 But our favorite meal — and one of the best meals of our lives — was at Ava Gene’s. Oh. My. Goodness. Grilled bread with sheep’s cheese and giant juicy green tomatoes. Agnolotti pasta that tasted like sweet corn. Prosecco that the wine director described as “a special little wine.” I want to beam myself back there right now. 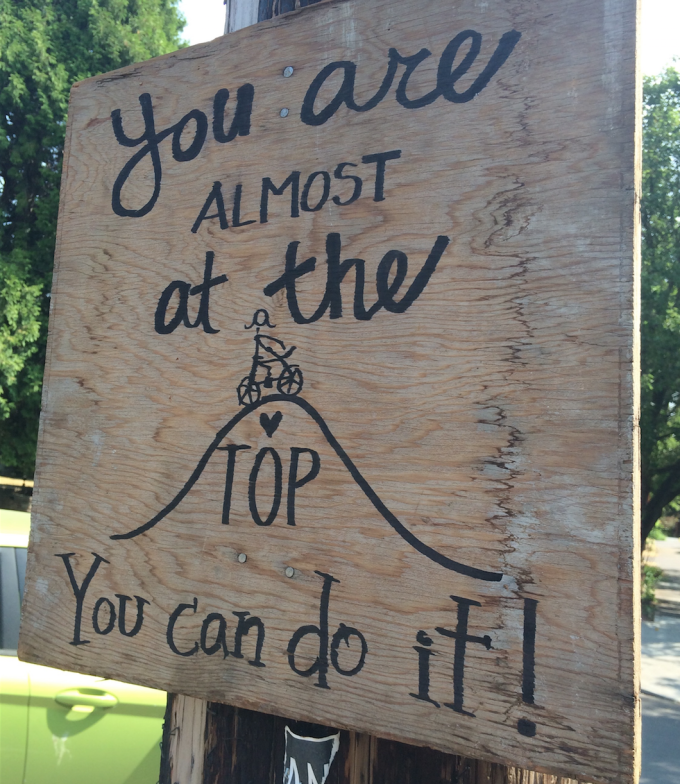 Of course, Portland also had lots of its famous quirk. This sign, above, was near the top of a big hill. How cute is that? 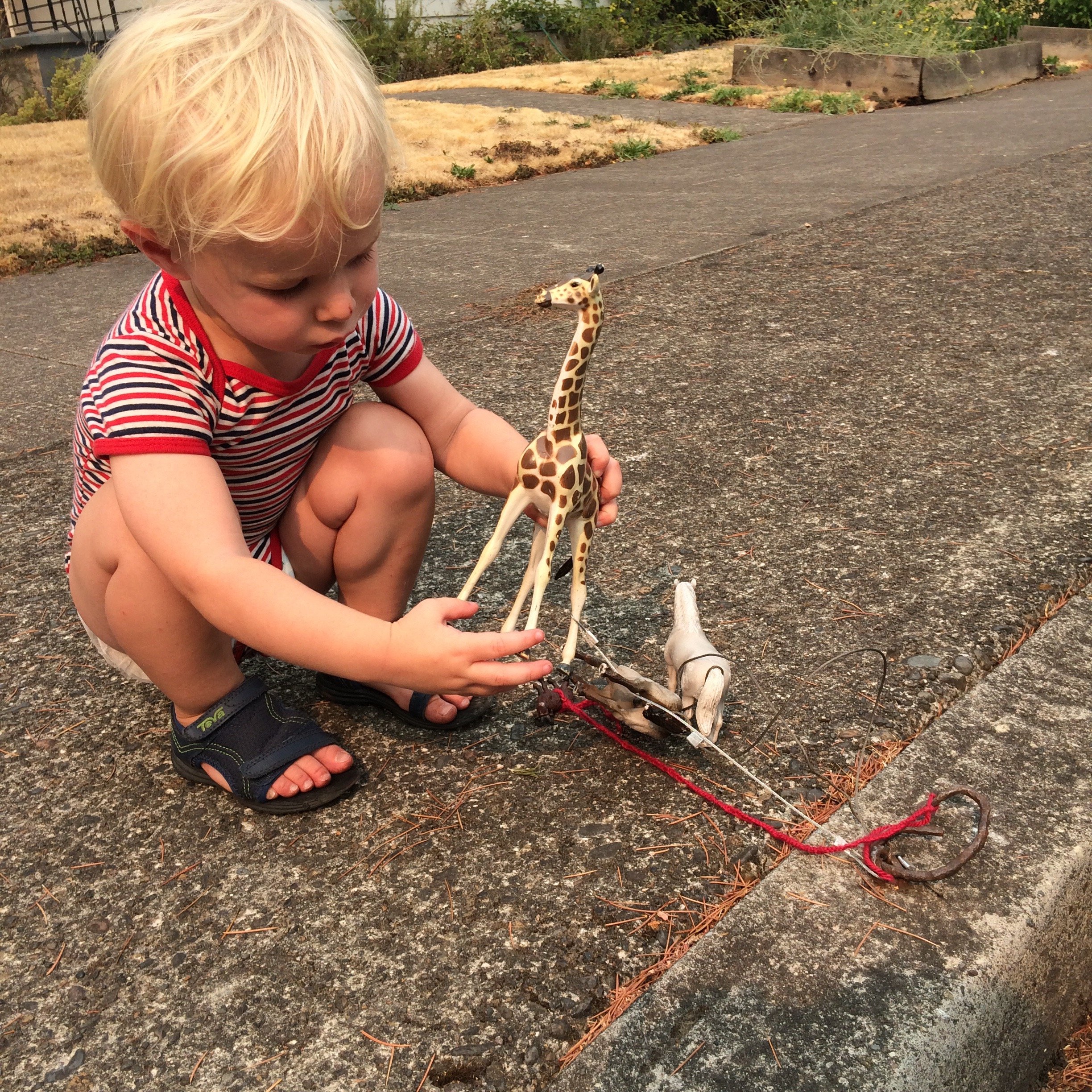 And apparently it’s a public art project to tie toy horses to the antique horse hooks around the city. We found these guys near our house, and Anton stopped by every day to say hello. 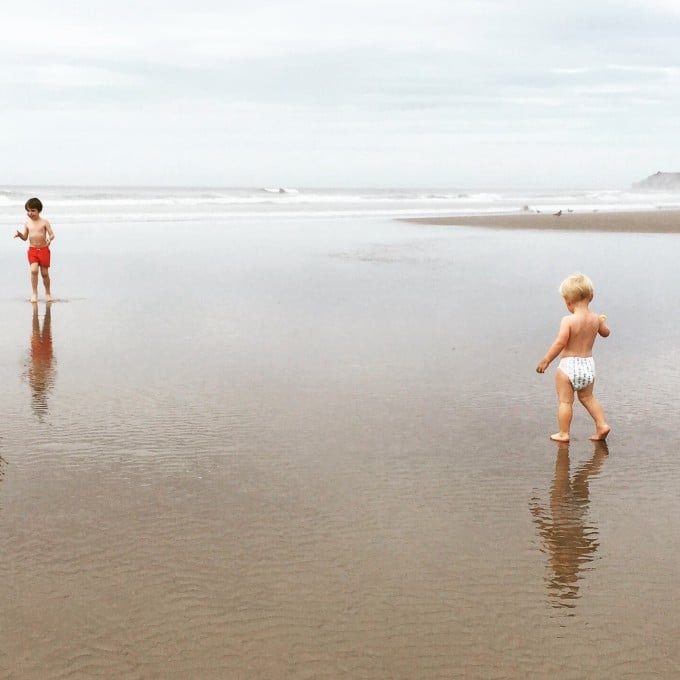 The final weekend, we went to Manzanita, a beach town on the coast. (We stayed in this lovely rental, which I’d highly recommend, as well.) One cool thing about the beaches was how the tide would create little “lakes,” which kids could easily run around in. The boys were in heaven. 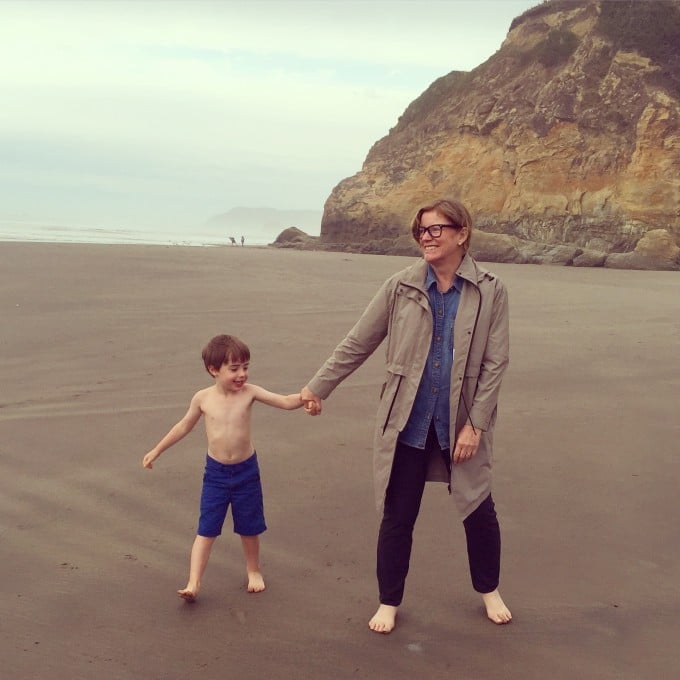 My mom and Alex’s mom joined us, which was such a treat. 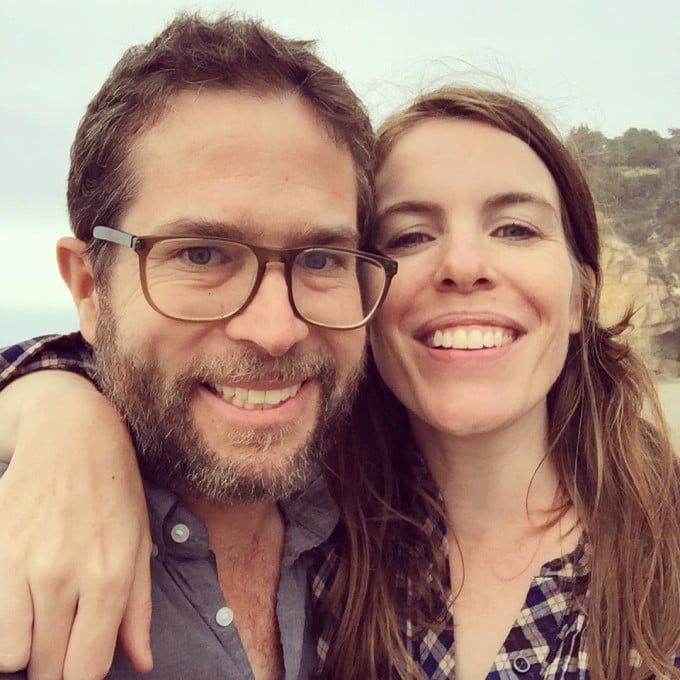 And Alex and I celebrated our sixth anniversary. Time flies! 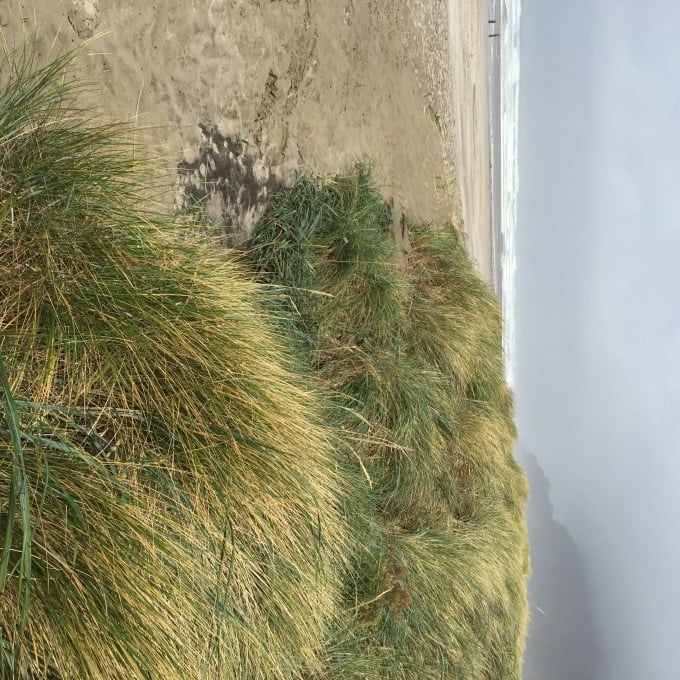 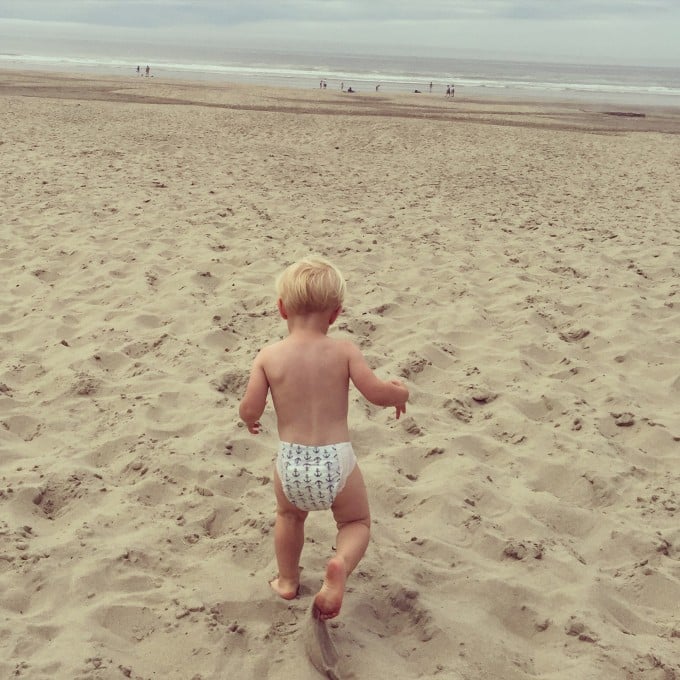 What a magical trip. Thank you so much, Oregon. We miss you already and can’t wait to come back. xoxo

P.S. 10 tips for traveling with a baby, and how to entertain a toddler on a plane.

(Ava Gene’s pasta photo by Randy L. Rasmussen/The Oregonian. All other photos by us.)

I’ve had this vacation post flagged down forever because I want to recreate it with my family. Finally thinking of heading out to Portland for a week at the end of August and looking for an Arbnb rental. The link for the one you stayed in is not working anymore but I wanted to find out what neighborhood it was in. Love the idea of walking down to food trucks for meals

i’m so excited for you, lana! we stayed in east portland and loved it!

I live in Portland – inner SE is a great jumping off point – Sunnyside or Richmond have good access to Division/Clinton/Hawthorne/Belmont- good access to restaurants and food carts! (Kerns, Buckman, Laurelhurst- all good inner SE neighborhoods).

Thanks for giving Oregon so much love! xx

Thank you so much for this! I went to high school in Portland and every summer my husband and three daughters and I go back for 10 days. I have never done any of these or been to any restaurants you guys did for your trip. I told my husband next summer we are eating at all the places you guys did and doing all the fun activities.

I love it when a visitor comes to the town I’ve lived in all my life, and finds a place I’ve never been. Gonna try Ava Gene’s for sure, and thanks for visiting the PNW. I might even rent that house because I’ve never lived in one with a front porch.

hey Laurie!
I am from Singapore and we wanna come to Portland in january and wanted to check in with a local – is it very wet in Oregon/ portland in january?
We are super okay with cold but wet, we gotta see how it goes… :)

Thank you so much, love from singapore
michelle

It is usually very wet in January. We don’t get snow in Oregon either, cause at least that would be a nice change. June through July are our best months, and even October (except this year), if you want to plan a visit around the weather. We do get nice windows of good weather, but you just can’t plan on it.

Joanna I am so glad your family had the chance to visit Portland. I live just three blocks up from Ava Gene’s and have romanticized over that place since I moved here a couple years ago. Glad you were able to enjoy the city and all of it’s beauty and kindness and good food. Do come back again! And next time you come back, be sure to go to Salt & Straw! A weekly staple food of mine :)

What was the first rental you stayed in with the 3 bedrooms and the food trucks down the street?

Manzanita seems to be a really gorgeous place! My sister is planning to move to Oregon next year. Her best friend is there and she feels like she wants to go and explore the state! I will definitely share your post with her! Really cool trip! :)

Manzanita is by far the best town on the Oregon Coast! Not that I’m biased or anything – my family has had a cabin there since before I was born :) It’s such a sweet little town – lively enough, but not too touristy, and so, so beautiful.

you are pretty right!, I like Mazanita as well!

I just got an aura photo taken yesterday! The first one was completely red, and the second was a mixture of red and blue. :)

Oh, this is so darn cute! I’ve never been, but your restaurant rec is enough to compel me! I love prosecco and good food!

Prosecco is wonderful…but please buy organic…we live right in the heart of where it is made in Italy and they use far too many chemicals to produce, affecting our water and our air. People here are marching against the use of these chemicals. In our area, for the months of June/July, the smell of these are so strong in the air, we curb many activities like biking, running, etc. You’re support and love of Prosecco is appreciate but please make conscious purchase…if you need any organic brands happy to provide.

I love that you got a picture of the bike sign! There used to be one on the big Salmon street hill and it would always make me so happy when I got to the top on my bike. Maybe they put one up again!

What a great trip!!

We also just got back from an incredible vacation in Oregon and can’t wait to go back! Great minds…

Oh my gosh, I’m in love with Oregon! We just took a trip down the coast this summer and never wanted to leave! I’m adding your recommendations to my list for our next trip out there!
Happy late Anniversary!!

We just moved to Portland in July and I combed through the comments of your last post and made a list of places to visit (and mostly to eat) as we explore our new hometown. We just went to Multnomah falls this week (as well as a bunch of neighboring waterfalls for some beautiful hikes) and to the coast a few weeks ago. Ava Gene’s is now going to the top of my list!

My boyfriend and I are going to Portland in a month as well as Vancouver Washington. I have been once before and totally fell in love with the people, food, and overall environment. We have a lot of family in that area and are actually thinking to move there within the year. Great post, I am glad you had a great time!

I love this post, Joanna! My husband and I just moved to SF, and we’re excited to head up to Portland now that we’re on the west coast. I will definitely be using your post for tips, especially Ava Gene’s! We went to Seattle last year and completely fell in love with the PNW. Strangely, images of Seattle pop into my head quite often now. There’s something magical about that part of our country. We were pretty close to moving there, but I was afraid I wouldn’t handle the dark and rainy winters very well. I heard Portland is a bit sunnier than Seattle, so I imagine it must be perfect!

Also, I love the pictures of Anton with Motato! So precious. He seems like a total sweetheart!

Hi :) You are such a cool and nice couple.. wish you many many more years together and such cute kiddos ;) Anton is such an angel with Motato :))) and Toby is always a gentilman ;) i wish to visit one day those places but i am really far from there.. hello from İstanbul, Turkey..

what a pretty couple you make!
gorgeous you so darn cute kids!

Awww Oregon!! I spent my summer in Portland and I miss it so much! Voodoo Donuts was the BEST (omg Vegan Donuts, thank goodness!), the Food Trucks were a must, and ohh the coast. I can’t wait to go back!
~ Samantha

Happy Anniversary!!..
Holiday pics make me ache to go-away somewhere warm with people who love me or maybe just me… Anton’s really blonde, who does he get from?

Currently a New Yorker, born but raised a Portlandian… Your post makes my heart ache. My family, husband and two boys, same ages as yours, spend many weeks a year in PDX and my coastal stomping ground. Greatest place ever to be raised!

you are totally moving there! <3

I absolutely love Oregon. It is one of my favorite places to visit as it’s so peaceful and truly beautiful! I have family in Portland! So happy you love it as much as I do!

we all need a little encouragement! ;))

glad you enjoyed it!

How cute are you!