As you may know, I have been looking for an editor to work alongside me, and I’ve found her! I’d love to introduce Caroline. She was a book editor at Penguin before jumping ship to come to Cup of Jo, and I’m thrilled to have her here.

Why I wanted to hire an editor: As I’ve mentioned, this past fall, I was feeling pretty burned out. Part of that was postpartum depression (similar to what happened after Toby was born—it was grim!—and I’m so grateful to have come out the other side). But part of it was that I was so bogged down by day-to-day work and upkeep that I didn’t have enough time to write as many longer, more thoughtful posts or produce the types of original series I wanted to. I felt like I was on a treadmill. And after years of working on my bed, I really craved a separate workspace (a room of one’s own) and a collaborator to chat with about things like post ideas, ad negotiations and, of course, celebrity crushes.

Why blogging takes so long: Honestly, sometimes I look at my blog and think how does it take so long?! But it does! As I’ve mentioned before, blogging should look easy—just how magazine articles and books should look easy and fun. But it doesn’t mean that it is easy. Writing the posts is the fun part (I love that part so much), but it’s only the tip of the iceberg. I’ve found that the bigger your blog gets—and the more you focus on it as a full-time money-making career as well as a creative endeavor—the more work it is. I wrote about the behind-the-scenes of running a blog here, if you’d like to read more.

On the hiring process: When I posted the job listing in December, I wasn’t sure what to expect, but more than 500 resumes poured in! I couldn’t believe the caliber of applicants—magazine editors and writers, book editors, up-and-coming bloggers with strong voices, novelists, you name it. After painstakingly narrowing down the list, I called 16 people in for interviews. We chatted about their experiences, goals and aspirations, and I asked them some formal questions (“How would your current boss describe you?” and “Why are you applying for this position?”) and some fun ones that Swissmiss had recommended (such as, “Describe yourself in three words” and “What’s something you’re bad at that you wish you were good at?”). I loved meeting all these smart and wonderful women! Then I chose a handful of finalists and gave them an edit test with various blogging assignments–such as “generate five ideas for how-tos” or “interview anyone about anything, but make it super tight and compelling.”

In the end, everyone was amazing, but Caroline really stood out. She’s a funny, energetic person with lots of ideas and opinions, and we had a good working dynamic, which is important since we’ll be spending so much time together. So I offered her the job and was thrilled when she accepted! We rented two desks, side by side, at Studiomates in Brooklyn, along with other friendly freelancers.

The future of the site: Right now, Caroline is getting trained and settled in, and she’s also working on larger series and interviews which are coming up. Looking ahead, we would love to make Cup of Jo a more full-service lifestyle site with more in-depth series—like another round of Motherhood Around the World and more Motherhood Monday essays—as well as new series, which we’re already rolling out, such as beauty uniforms, house tours, comics…and more coming up. As we move forward, and experiment with things, I’d love to hear your thoughts, since it’s so important to me that you love the site. And, with Caroline on board, I’m also excited to get my work/life balance back on track this summer, since it’s been so off since Anton was born!

Anyway, Caroline is the best, and please welcome her to Cup of Jo. She lives in Brooklyn, has an adorable puppy and loves loves loves lipsticks (she wears different colors every day). I hope you enjoy getting to know her as time goes on!

Thank you so much for reading this, and lots of love, as always. xoxo 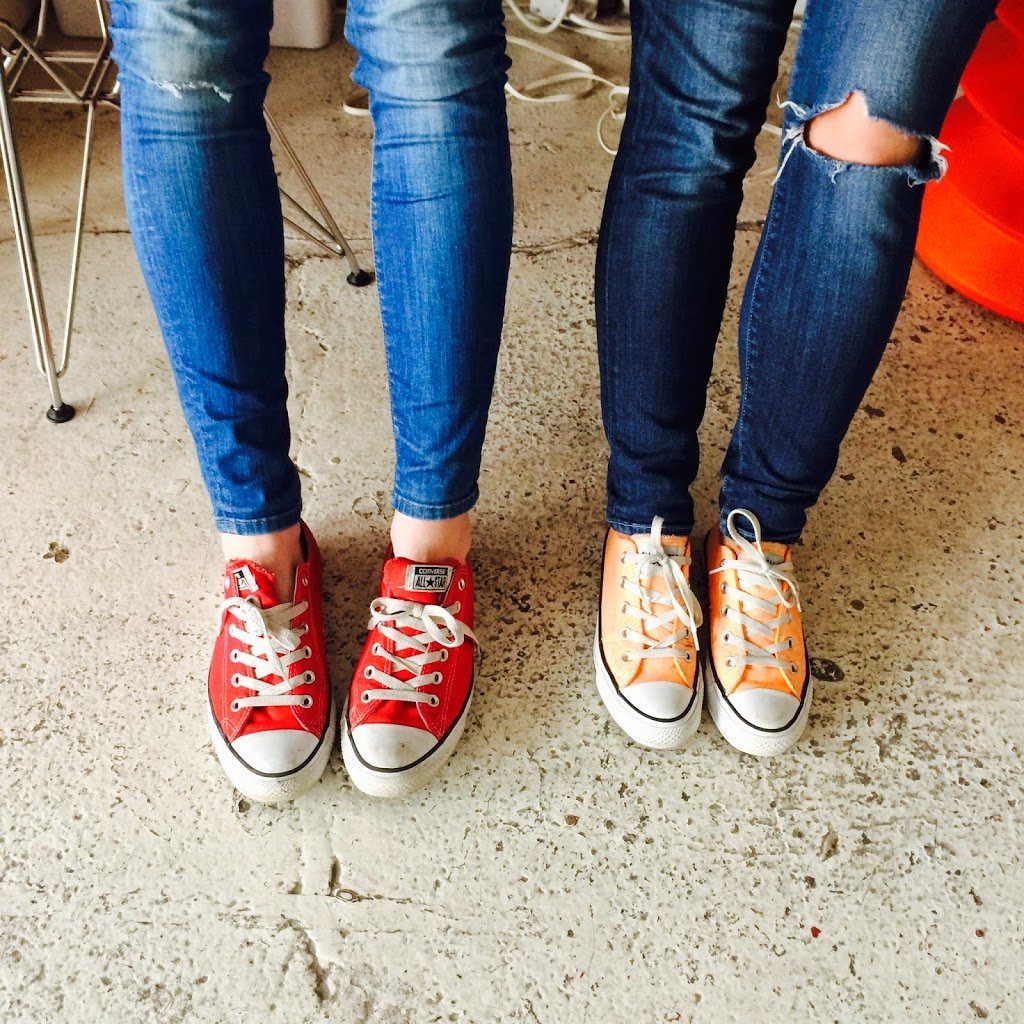 (The required footwear for the job.)

P.S. Blogging as a career, and 14 mothers talk about work/life balance.

(Thanks to Jen Mussari for snapping some photos yesterday.)

Tags: caroline, personal
132 COMMENTS
WRITE A COMMENT
Relationships
most popular
01
Seeing My Body With Fresh Eyes
02
11 Wedding Dos and Don’ts
03
How to Write a Condolence Note
04
A Love Letter to My Anti-Anxiety Medication
05
How to Be a Better Listener
May We Suggest…
By Joanna Goddard
Relationships
Our Tenth Wedding Anniversary (!)
August 21, 2019

214 COMMENTS
By Harling Ross
Relationships
The $20 Item That Changed My WFH Game
September 17, 2020

Hi Joanna,
I love everyone of Cup of Jo team, I was just wondering if Caroline left, I haven’t seen anything written by her recently. I miss her…

Hi! We love her. She got hired to write a few books (she’s an incredible ghost writer), so she moved from working three days a week for cup of jo to having more of a freelance role. I’m happy to tell you that she just turned in a post about being an introvert and that she’s working on an updated beauty uniform! So Caroline will be on the site again soon. Thank you for checking in! Xoxo

You are so stinking awesome! I love the last picture lol. I know I’m a little late with this, but good luck and I cant wait to see what great things you and Caroline have in store for us!

Cannot wait to see what the two of you come up with! Hope it will be a fantastic fruitful partnership!

Congratulations! I’ve been reading Cup of Jo since 2008ish and am excited to see it grow. Have truly enjoyed reading.

I am a little afraid that this blog then becomes less personal, as Garance Doré’s blog which is written by several people (her studio). She hardly writes on her own blog now… But I suppose that is what we call “la rançon du succès” in french.

Welcome Caroline! You’ve got quite an engaging blog yourself! Your post about moving to New Zealand totally had me confused and April Fool’d–well done!

I am so excited to hear about the direction for Cup of Joe…I love this little space on the internet, sometimes I stay away for a little while, so I can curl up on the couch with some coffee or wine (depending…) and catch up. It’s like a beloved magazine. Also, so glad you are on the other side of postpartum depression. That is a hard stage to go through… On to better and better things! Congrats Caroline! :)

I absolutely love your series posts. I can’t imagine how much work they take! Glad you are getting some help! As always, thanks for blogging!

Happy for you! I just hope your blog doesn’t lose the personal touch. The blogs I enjoy most make me feel like I know the person. As, if we met, we could be friends. A little peek into another life. I have seen a few blogs lose that as they grew, and added staff and became an advertisement and therefore lost me as a reader. Guess I’m a bit of a voyuer ;) Best wishes

Welcome Caroline! i have always love reading this blog, it is always my energy booster! Hope you will enjoy your job has much as joanna has always had
as for new ideas of the blog, how about doing a series on asians living in NYC and New Yorker living in asian cities? The asians can be first generation immigrants who don’t even speak english or second generation of these immigrants, and vice versa the New yorker can be someone who was relocated from work or just wanted a change in environment. I think the cultural shock that these people experienced will be good and fun to know. :D

That’s so exciting to have some help on board and if Caroline loves lipsticks, then I will love hearing what she has to say!! Congrats and can’t wait to see what fun stuff ya’ll come up with!

She looks awesome! Can’t wait to hear more from her. Welcome, Caroline!

Congratulations to you and Caroline!!! I can’t wait to see how the site grows and changes and gets even better!!!

Congratulations to you and Caroline! I can’t wait to see how the site grows and gets even better!!!

Welcome!!! Can’t wait to see what you guys have in store!

I lov lov lov motherhood series! As a new mom leaving in asian country, would love to see how is the education system around the world as well as the growth environment for the kids! Lookin forward to more great posts! Congrats!