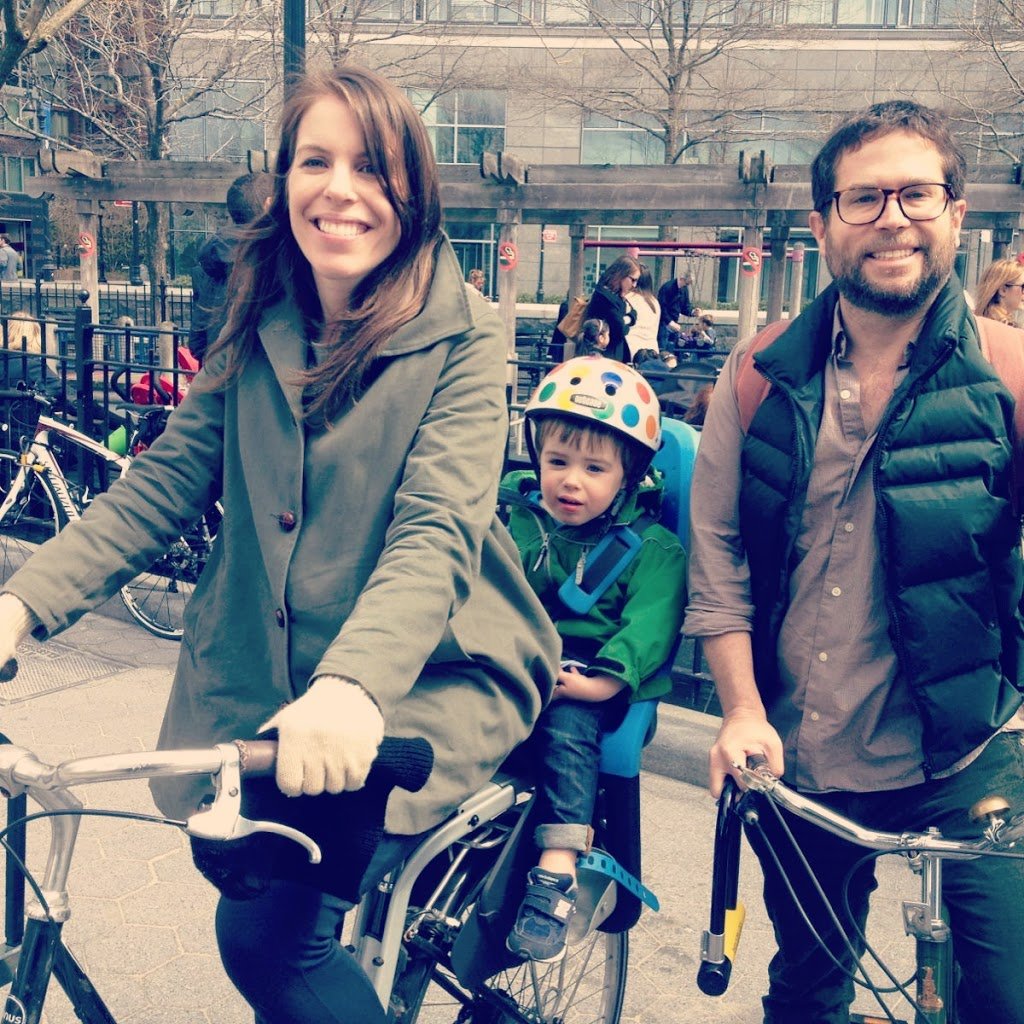 We did something kind of funny last weekend…

We went on a weekend getaway four miles from our house. :) Since we’re hoping to move to Brooklyn, we wanted to get a better sense of our target neighborhoods. Since every New York neighborhood has a very distinct personality, we thought it would be worth it to spend some real time in the areas where we’re hoping to move. We often visit friends there, but our goal was to experience the neighborhoods as locals do: explore the streets, hang at playgrounds, chat with parents, eat in the restaurants, walk around early in the morning and late at night, figure out if certain streets were too noisy or desolate…all those little things that make a big difference when you actually live somewhere. 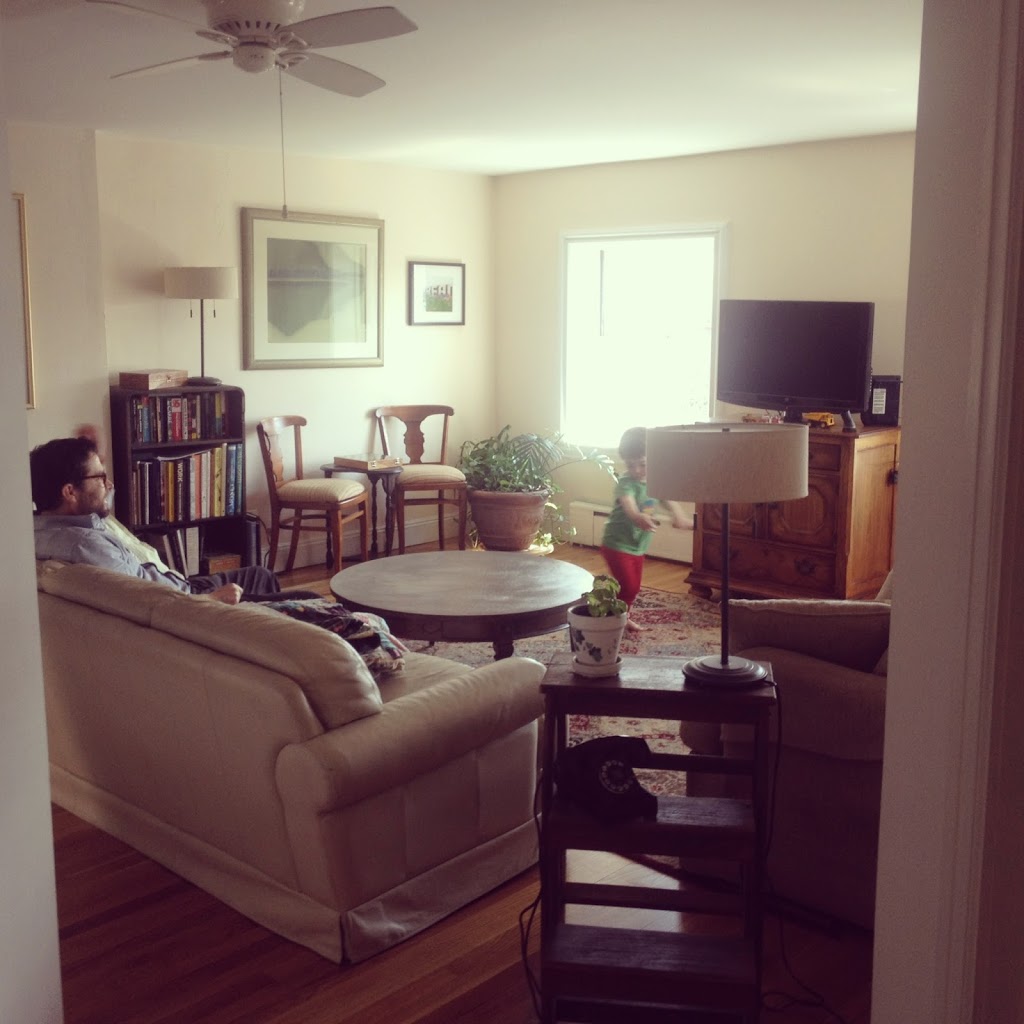 We rented an apartment on Airbnb in Cobble Hill for two nights. It was a fifth floor walk-up, so the light was beautiful. FYI, if you’re planning a trip to Brooklyn, this was a great place to stay. 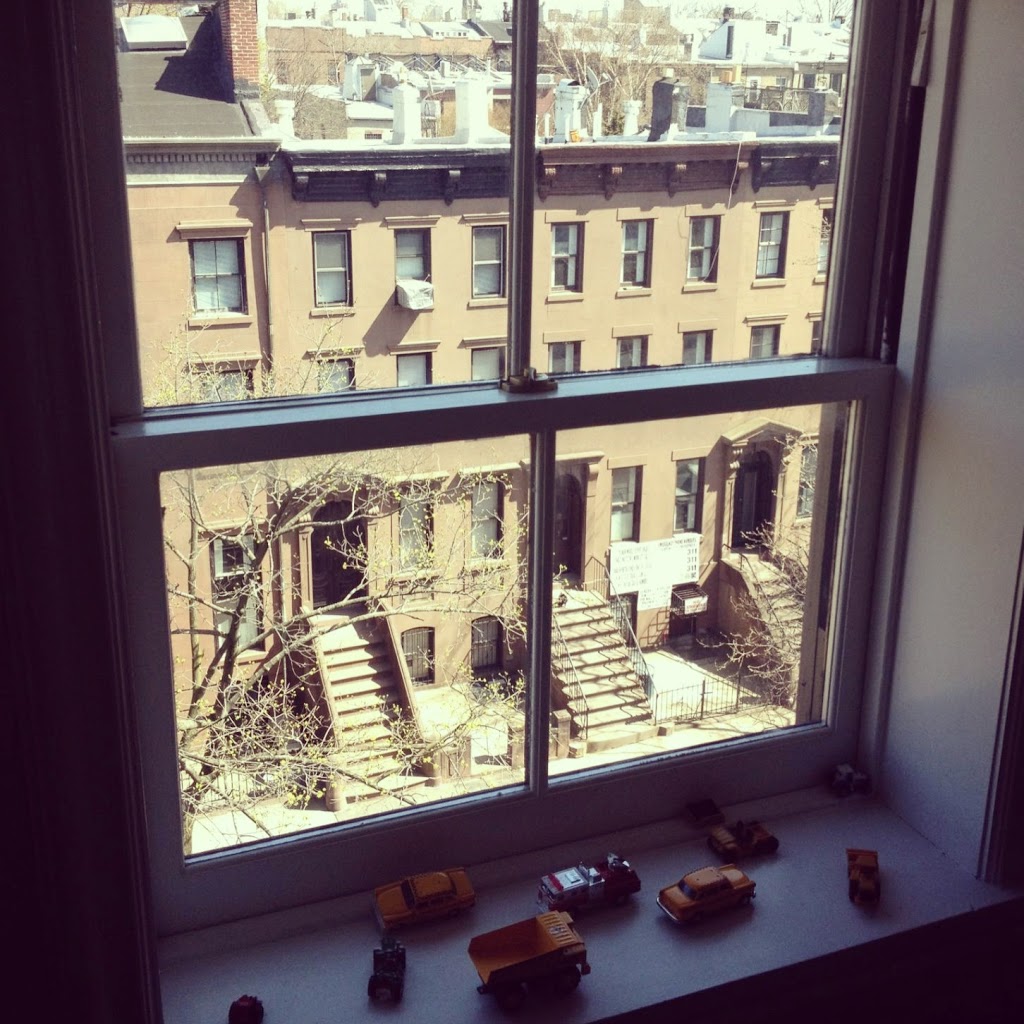 Here’s the view (and the cars Toby borrowed from the boy who lived downstairs). 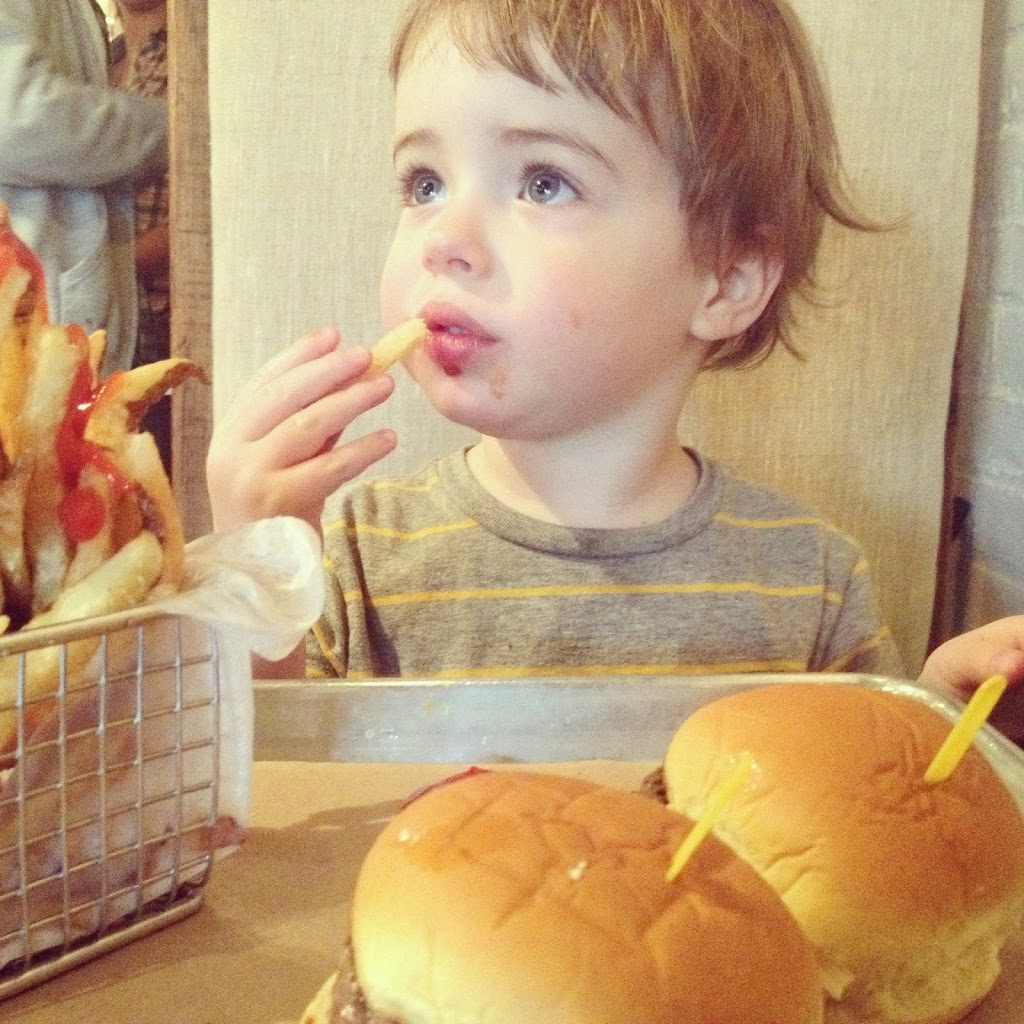 On Friday evening, Toby and I went for a walk and ended up popping into Moo Burger. He got two sliders and a pile of fries…and devoured it all! It gave me a flash-forward to feeding a hungry teenager. 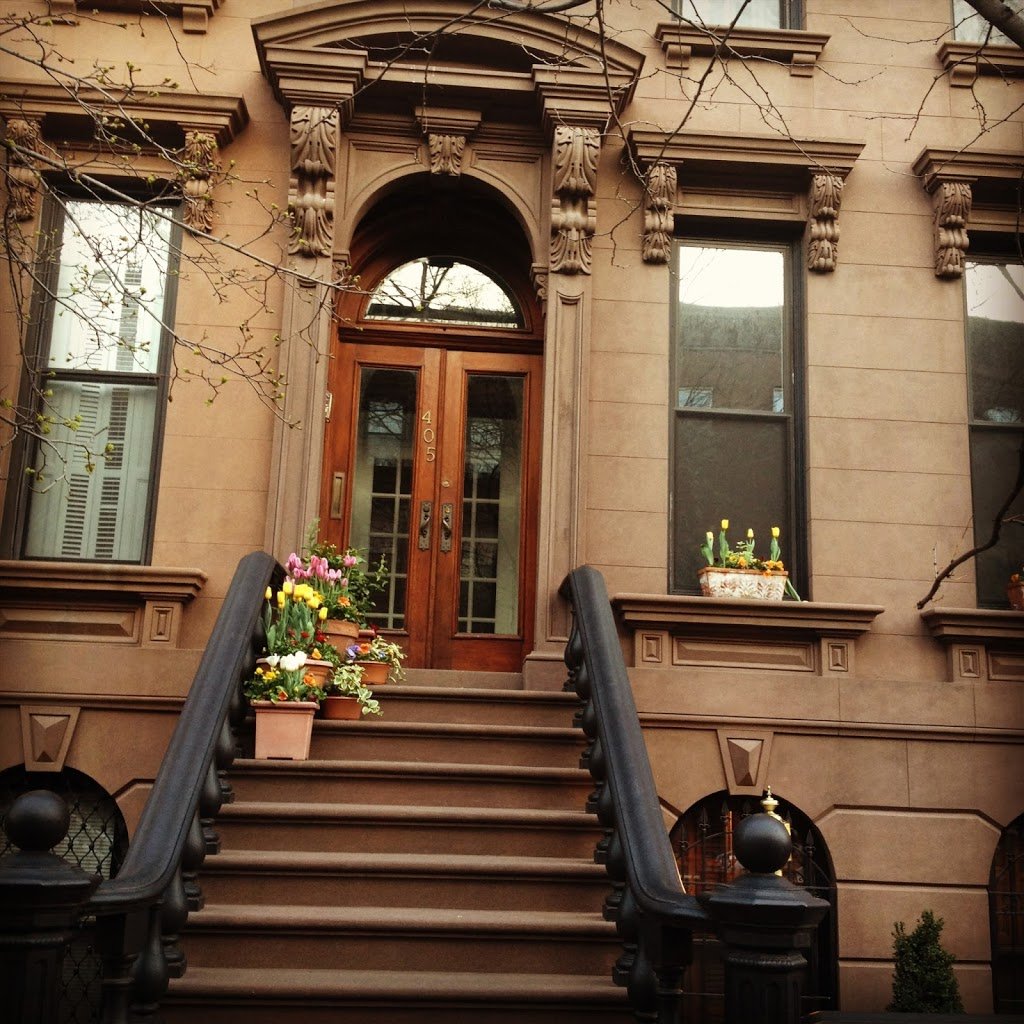 The streets were lined with classic brownstones. This one had pretty spring flowers. 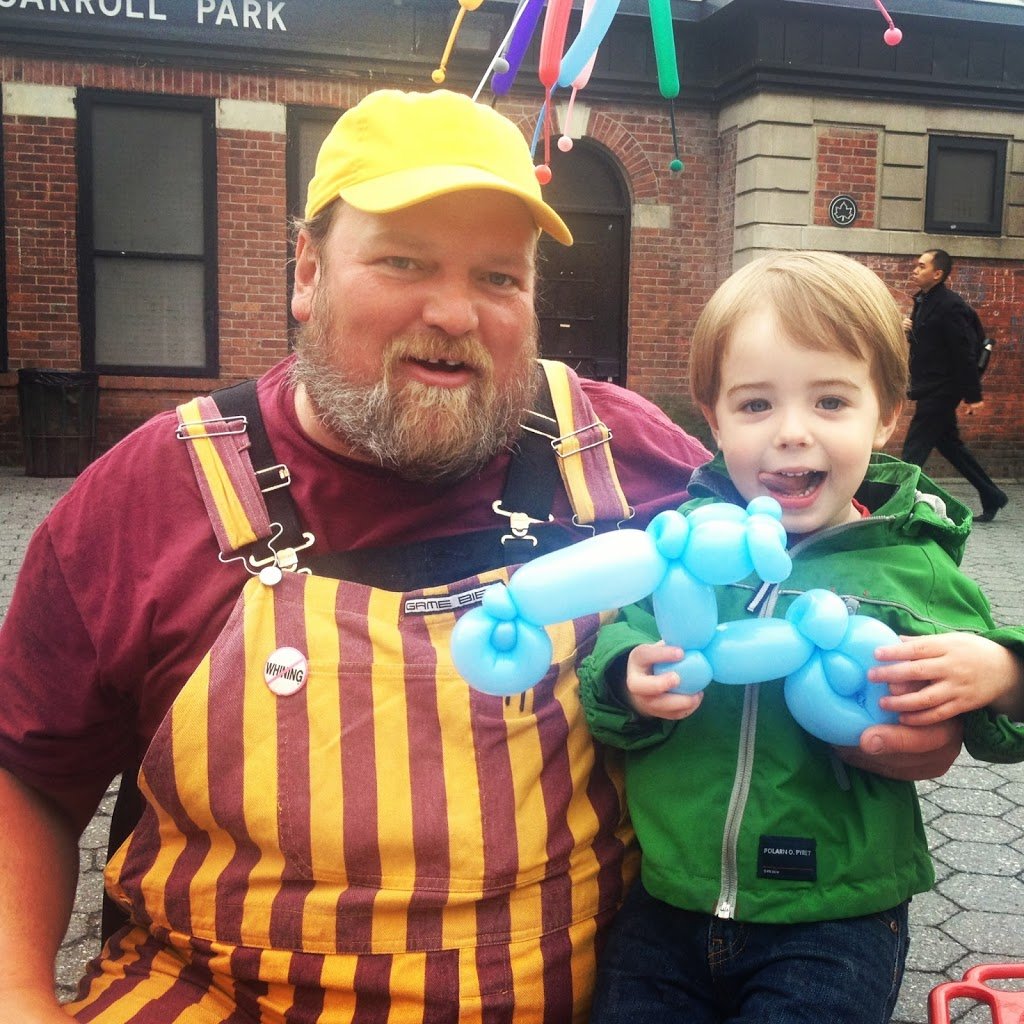 On Saturday, we went to Carroll Park playground. This hilarious guy was making balloon animals for kids. He made Toby a motorcycle! 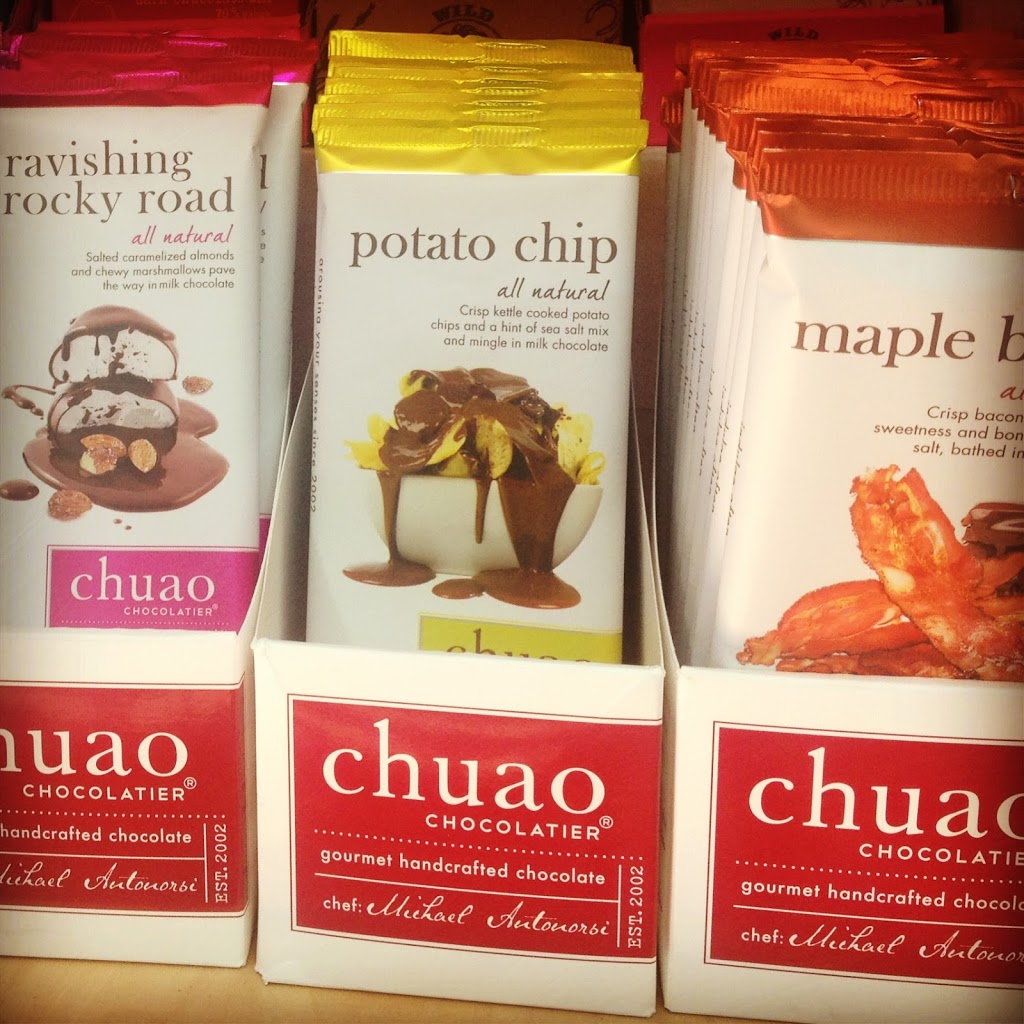 Then, on our way to meet friends, we stopped by a little grocery, where I spotted this potato chip chocolate bar. Perfect for pregnancy cravings, haha. 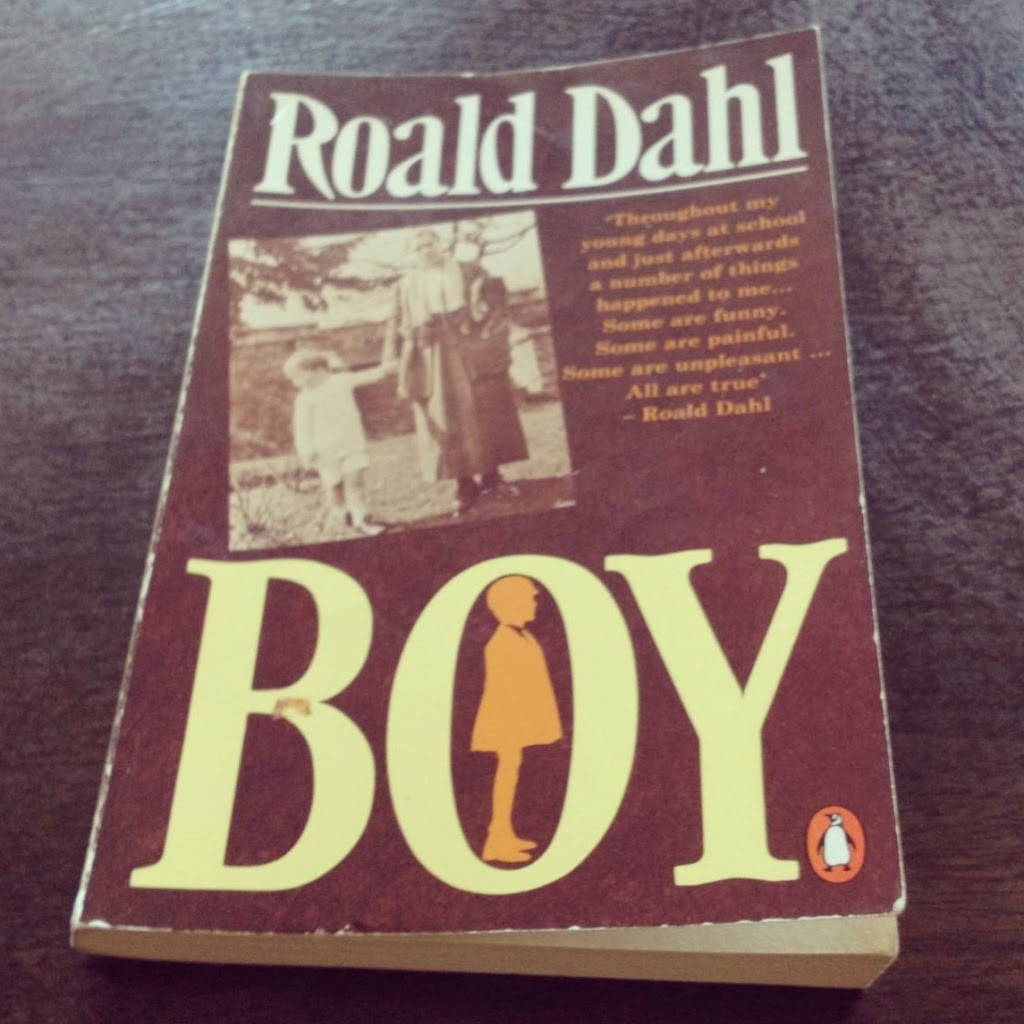 One bonus of staying at someone’s else’s house is that you get to comb their bookshelves. Over the weekend, I read Boy, Roald Dahl’s fascinating true story of his childhood. Boarding schools in the 1920’s were intense. 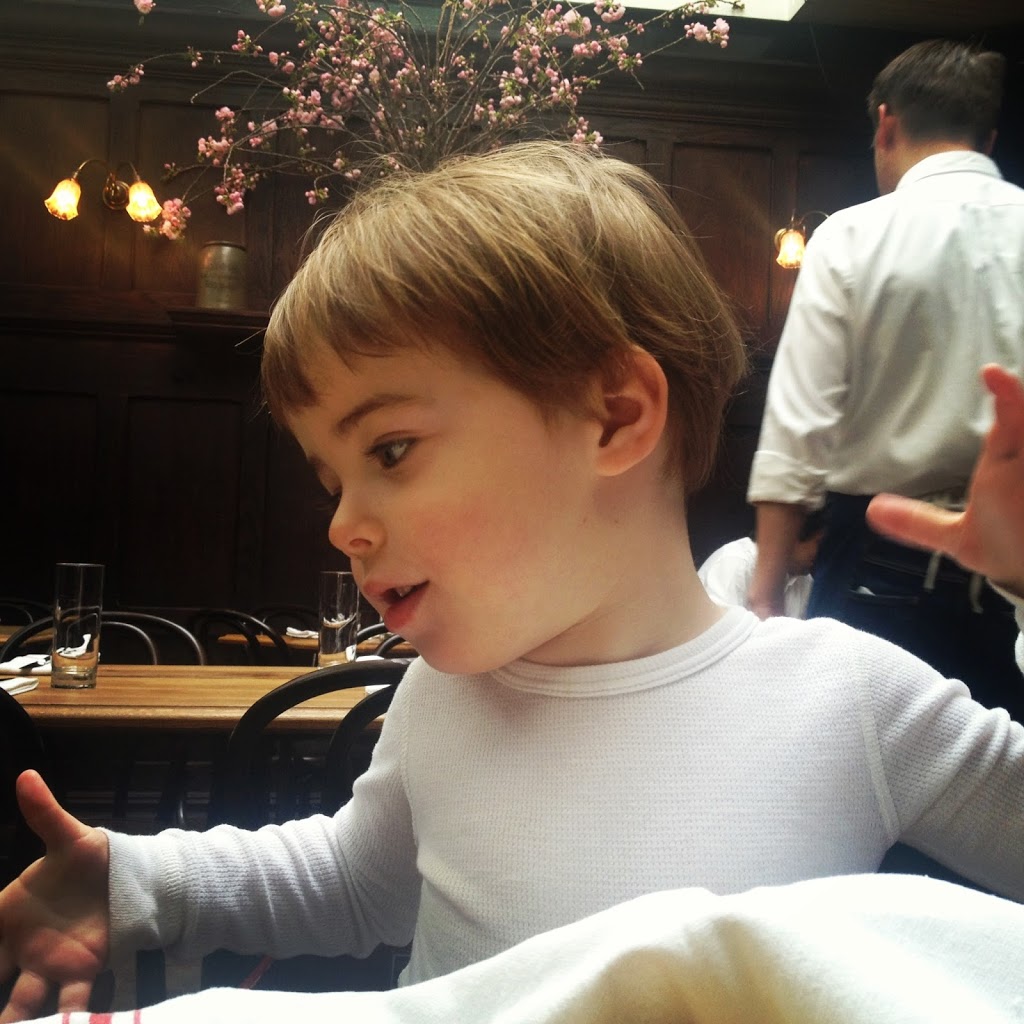 Our final day, we took a long walk and went to Prime Meats for brunch. Here, Toby played along to the Neil Young soundtrack on his air guitar. (Reminded me of this funny Onion article.) 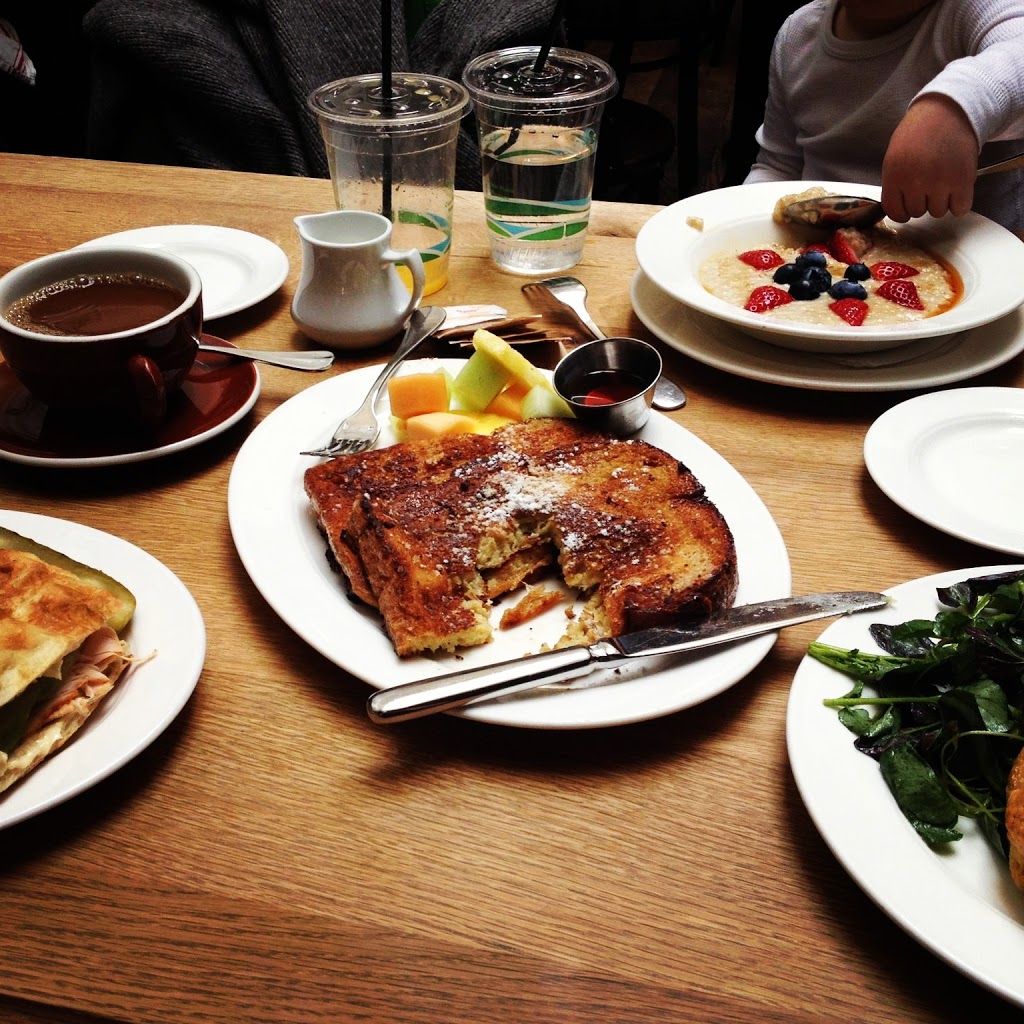 Toby, Alex and I got oatmeal, a turkey BLT and an egg sandwich, respectively, but when the wait staff found out that we were exploring the neighborhood, they sweetly brought over a plate of French toast for the table. What a feast. 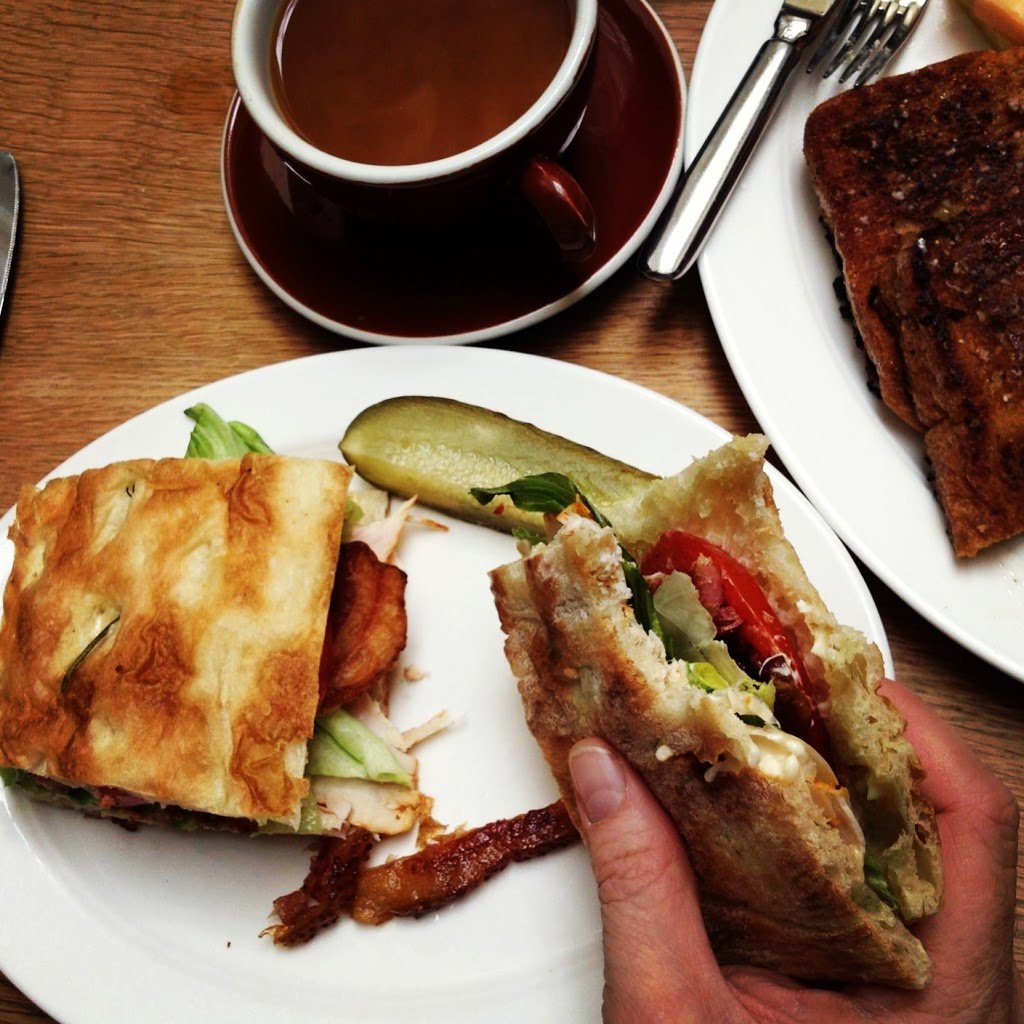 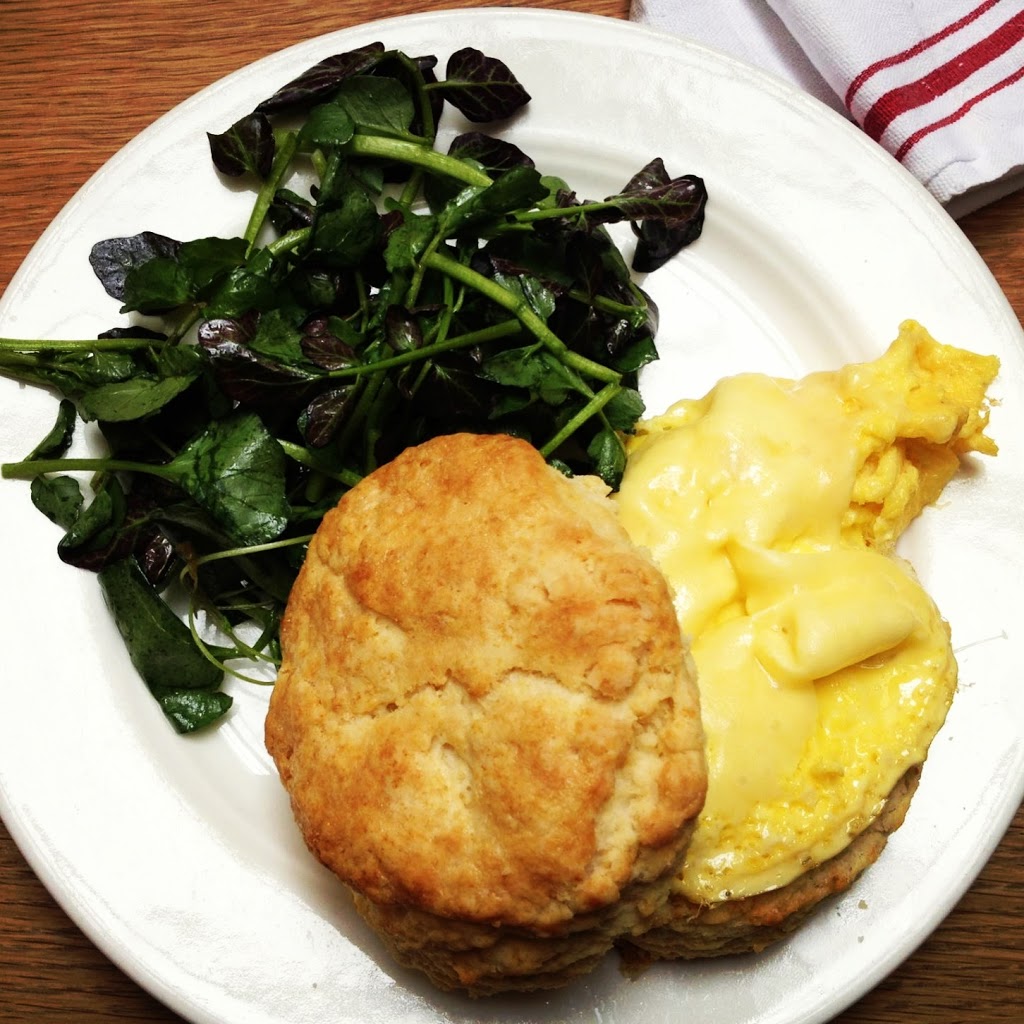 Anyway, it was such a fun weekend, and we completely fell in love with the neighborhoods. It was incredibly helpful to see what they were like in a real way.

I’m curious: When you’ve moved in the past, did you visit first? How well did you know the place? Did you ever just have to up and move?

(FYI, in the top photo, we weren’t wearing helmets because we were only riding a few blocks on the bike path. But we wear our helmets on longer rides and on the city streets. Toby even says now, “Mama, you wear your helmet, too?” so he’s watching out:)

Tags: alex, brooklyn househunting, family travel, new york, personal, toby, travel
132 COMMENTS
WRITE A COMMENT
Design
most popular
01
My Sister’s Home Makeover
02
What Are Your Top Three Books?
03
The Ultimate TV Guide (If You’re Looking for Something Great)
04
Catherine Newman’s House Is a Joyful Jumble of Books, Games and Cats
05
Behind the Scenes: Making a Magazine Cover
May We Suggest…
By Joanna Goddard
Motherhood
What Was the First Meal You Ate After Giving Birth?
August 23, 2021

Seems like the kid enjoyed his perfect weekend getaway with his parents.
Really enjoyed going through your blog.

Staying over for a weekend in a neighborhood your considering living in is a wonderful idea! I’m so glad you enjoyed your stay. Since I moved to NYC 10+ years ago I’ve lived in Brooklyn (minus a one year hiatus in Queens), and I have been in my Park Slope apartment for 6 years. I wouldn’t choose to live anywhere else, I love it here! I’m sure you know lots of people in the area, but if you need any recommendations let me know.

What a cool idea. That looks so fun! And I am going to buy that book now… :)

What an amazing idea! My fiancee(boyfriend at the time) and I moved from Long Beach, California to Jersey City, NJ sight unseen with the help of friends going and looking at two places for us and taking millions of pictures. Now we’re moving to the DC area in a week and a half! We took a five day apartment hunting trip and after looking at 18 apartments in 3 days we knew what to look for and what we wanted more out of a neighborhood. I’m still nervous and hope we love it but luckily for us we’re just renting and if we hate it then we’ll know where we really want to be after that year!

What an amazing idea! My fiancee(boyfriend at the time) and I moved from Long Beach, California to Jersey City, NJ sight unseen with the help of friends going and looking at two places for us and taking millions of pictures. Now we’re moving to the DC area in a week and a half! We took a five day apartment hunting trip and after looking at 18 apartments in 3 days we knew what to look for and what we wanted more out of a neighborhood. I’m still nervous and hope we love it but luckily for us we’re just renting and if we hate it then we’ll know where we really want to be after that year!

What a fun, wonderful idea! i’d like to do that sometime.

When we moved from our apartment to the house we are in now- similar situation to you with an expanding family we knew we liked the area but hadn’t spent a lot of time exploring it. We bought a house which ended up being on one of the busiest roads morning and evening traffic to and from work. We love out house but wish we’d spent more time at different times of the day to see what the traffic/ noise was like.
Olivia (Brisbane/ Australia)

Boy is my all-time favourite book! If you loved it there is a sequel, Flying Solo, about Dahl’s life as a young adult in the war. XO!

This is such a great idea, Joanna!

What a SPLENDID idea (and a fantastic neighborhood. We live on Sackett and couldn’t be happier). My son only recently turned one, but I’m constantly amazed by just how much there is to do and explore with a child in the neighborhood. You guys hit a few really great spots, but when you become real locals, you and Alex should head over to the Clover Club for a cocktail. Hope you guys wind up here (and please don’t be skeeved if a slightly overzealous, short brunette some day runs up to give you a high five).

We also made a move from Manhattan… with two children. We spent the night in a hotel so I could get a feel of the neighborhood in the early morning. It’s important to see what it’s like every hour. What a nightmare to move and then realize it was a mistake… especially when kids are involved!

Jo,
What child bike seat are you using?

Ah man, that is the way to do it! We’ve moved 3 times in the past 4 years and EVERY time we’ve never seen the house/neighborhood beforehand. Yikes. Once it was out of the country, to a small island in the Caribbean and once we got there, we ended up having to move again shortly after because we disliked the area. Other than that we’ve lucked out and our research online proved to be good!

Smart cookie testing the neighborhoods out in this way. I would have never thought to do this. What a treat!

That sounds like such an awesome weekend! I think it’s a great idea to explore your soon-to-be neighborhood before actually moving there (just in case there’s something shocking you hadn’t otherwise thought of!) Also, I have a friend who lives in the neighborhood in Brooklyn, and I absolutely adore it there!

How fun is that? I so wish I could find a job and be able to live in NYC. I truly think I would thrive there.

Wow! Is so good to see on your blog chocolate from my country Venezuela! (Chuao chocolatier) :) It makes me feel proud!

What a genius idea! I never would have thought to rent a place in my potential new neighborhood. Absolutely doing this when we start house hunting next year.

What a lovely week-end!
Regarding helmets: children do as we do, not as we say. I confess that is why I have worn my helmet every bike ride for the last 15 years–because I wanted my daughter to wear one every ride. Now 16, she still always wears hers…There is plenty of data, see:
http://www.ncbi.nlm.nih.gov/pmc/articles/PMC2598379/
“This review included five well conducted case‐control studies and found that helmets provide a 63–88% reduction in the risk of head, brain and severe brain injury for all ages of bicyclists.”

This is SUCH a great idea!! Really would never have thought of doing this. Also, seeing Toby’s breakfast has given me such porridge cravings… I know what I’m having for breakfast tomorrow!! x

when i was looking at east coast colleges (from the west coast), i couldn’t afford to visit, so i called the cities asking for their head of tourism and explained that i was a “prospective resident” and asked to have information sent to me about their city/town. it was clearly, an idealized version, but it was something :P in the end though, i think moves always work out because you find the good in each place and attach yourself to the comfort of what becomes familiar.

My boyfriend and I moved to Cobble Hill 3 years ago and we rarely ever go anywhere else. There’s so much so close to home and something new opening every week we’ve yet to get bored. There’s enough fun stuff to keep us childless folk busy but it also seems like a great place for kids. We’d love to have you!

Joanna come to Karloff! We are a block down from moo burger :)

my last move was about 15 miles. And it was night and day difference. I lived in a very young suburban area. All of the homes are yougner than 20 years old. The biggest and best thing around was Ikea and Target. and everyone went to starbucks. now I live in a more established side of town. Older homes, small businesses. I love it. I go to little cafes and coffee shops. I can walk places or take our lite-rail to a lot of the places I like. though it was only a few miles, it feels like a whole different city.

That is a really brilliant idea! I’ll have to remember that!