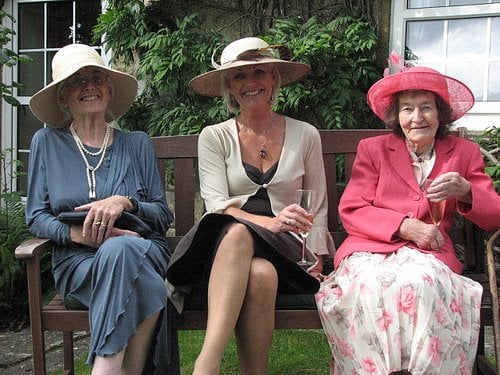 I’m so excited to show you the fabulous hats from my cousin Will’s wedding! So, at a traditional British wedding, the mother-of-the-bride and mother-of-the-groom are pretty much required to wear hats. Choosing a hat can cause some stress, as you can imagine. 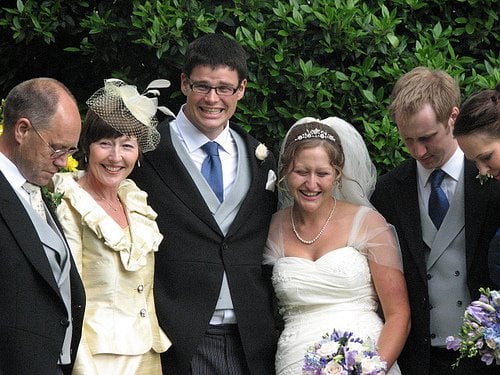 Here’s the mother of the bride. (Poor Will looks like he’s had too much smiling for one day!) 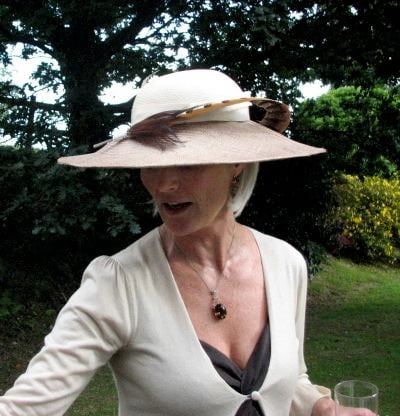 Here’s the mother of the groom, with her awesome feather. 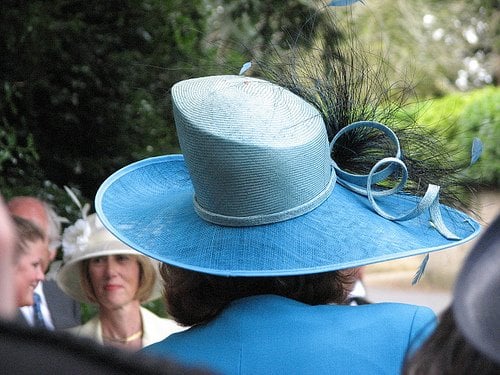 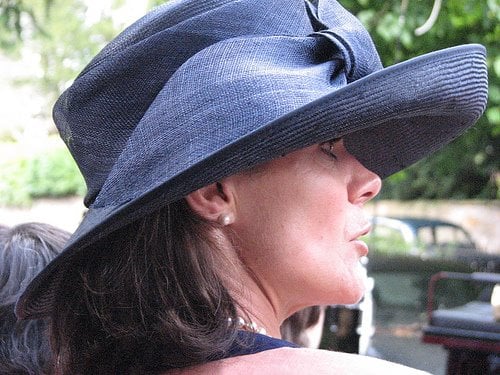 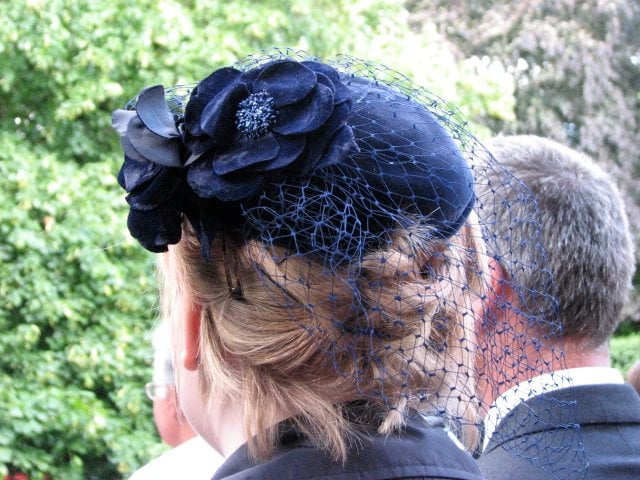 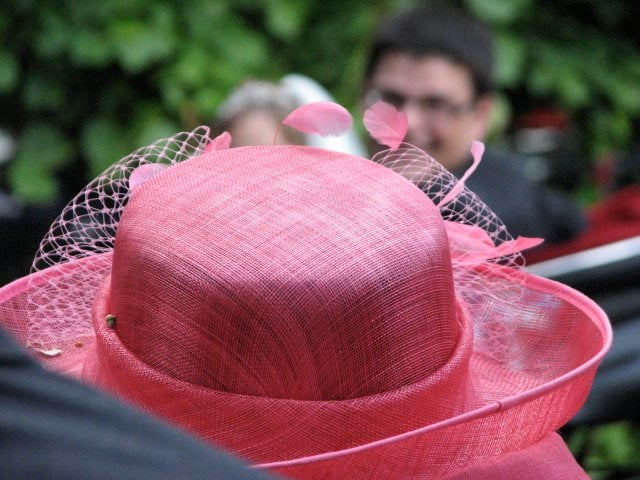 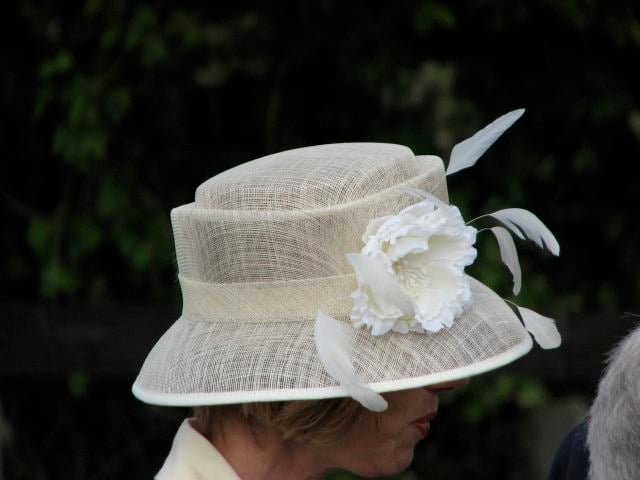 Other guests can wear hats, too, if they’d like to feel fancy. 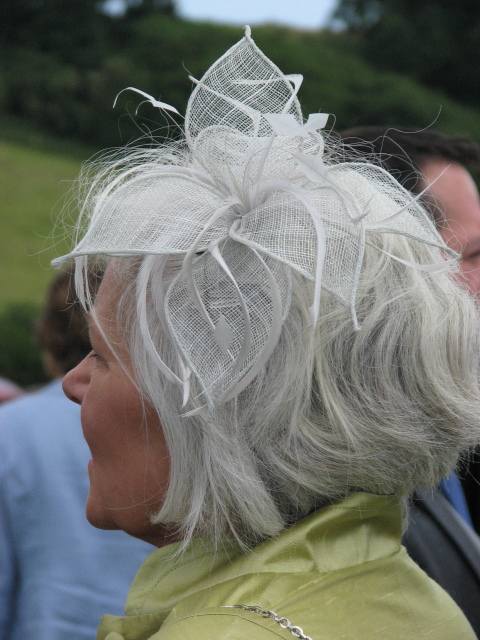 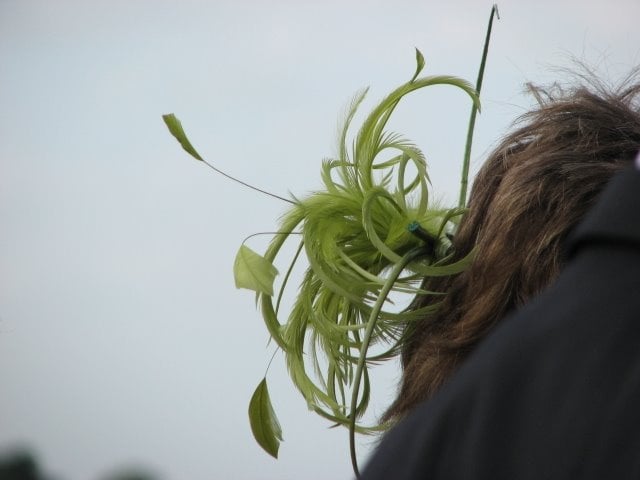 A cool twist on a hat is a “fascinator,” which is basically netting or flowers that you clip to your hair. This white fascinator on white hair works beautifully, and the green number is really rad. 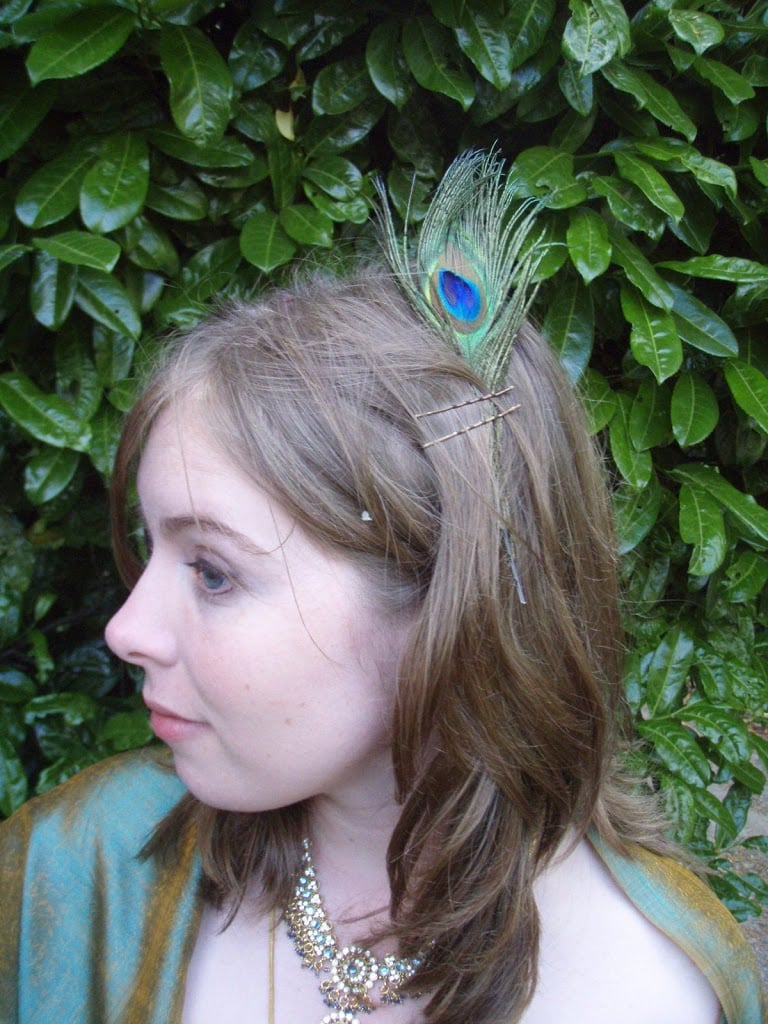 My sister Lucy made her own fascinator with a peacock feather, which she was loving until this exchange:
Lucy: “Do you like my fascinator?”
Uncle Donald (pictured below): “Oh? I thought your hair was just a bit messed up.”
Lucy: “Um, no, it’s a feather.”
Uncle Donald: “Oh. Yes. Well. At least that pheasant did not die in vain.”
Lucy, quietly, to herself: “Pheasant?” 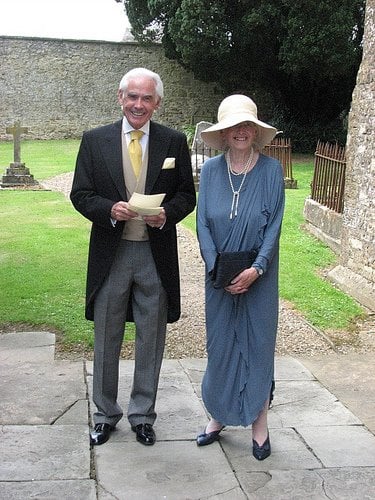 But, in the end, the star of the show was our grandmother, who looked like she had been plucked straight out of the 1920’s. None of us grandchildren had really seen her all dressed up before, so of course we were loving it. She also knew all the words to Moon River, which was awesome.

What a great post! The woman in the red in the first picture reminds me of the Queen Mum! so sweet! and your grandmother is fabulous!!!

Wow, amazing, some truly lovely a classy ladies! love those hats, I wish we had events like that in the states where we could wear them without feeling silly/overdressed.

Great blog post! I’m getting married to an American in December (I’m British) and we’re encouraging the hat tradition on the big day. Any idea how the tradition started? I’ve been trying to find out which was how I stubbed across your blog.

Sweet. Thanks for sharing =)

SO much FUN! I really love that you shared all of this with us. What a lovely family you have (and extended it seems). I’m a little green with envy to learn of your ties to England…lucky girl. ;)

Fabulous hats and Fascinators! I didn’t know they were called “fascinators” which is strange because I actually design “fascinators” in the states!
Thank you for this! It’s a very exciting day for me!

What a great post! The woman in the red in the first picture reminds me of the Queen Mum! so sweet! and your grandmother is fabulous!!!

i love it!! its so british but im kinda sad we dont have that tradition over here…hats are cool!

I love hats!! and feathers and flowers!!! why do not more americans adopt this beautiful tradition??? I’m having a tea party wedding shower one day where everyone will have to wear a hat and speaking with a british accent will be optional.

Wow! Such lovely stylish ladies. I love the mother of the brides headpiece best.

The gent next to the beautiful grandmother is her brother, Donald: Hamish’s uncle, and Jo’s great-uncle.

Why oh why am I not English?

the “fascinators” are my favs

Swoon. Loving the hats. And your dad’s story about your gram’s hat is the best!

ooh, kerry, you and corrie are going to love it!
thanks for all the great comments, everyone. these were so much fun to read. and dad, that was a great backstory! :)

The white on white is so artful. I really like it.

And that lovely man in the last photo (next to your pretty grandmother) – might he be Hamish’s father? Such handsome men.

We’ve been told that “fascinators” will be in full effect at Annabelle and Neil’s “British” wedding in France. Thanks for the heads up on what to expect!

i’m very particular on hats but i must say granmothers hat is amazing. i want it i want it!

Wow, I love each and every single one of those hats! Fabulous.

What a fabulous wedding, such creatively styled women! And the gentleman next to your lovely grandmother is quite dapper.

Love the hats! How fun would it be to if we all wore hats to the next wedding we attend.

Quite possibly the best post ever! I miss the ‘olden’ days when americans wore hats too. I wonder if it would be possible to bring that trend back?

How fun! I just returned from watching Henley and it was the same hat show. I heard that fascinators were banned from Ascot this year.

How fun! I went to Henley (rowing regatta) a few years back. It was incredible! All the women in the grandstands had fabulous hats to watch the races (dresses also had to be below your knees to be let in!). Jolly good time :)