7 Stand-Out Fashion Moments of the Oscars 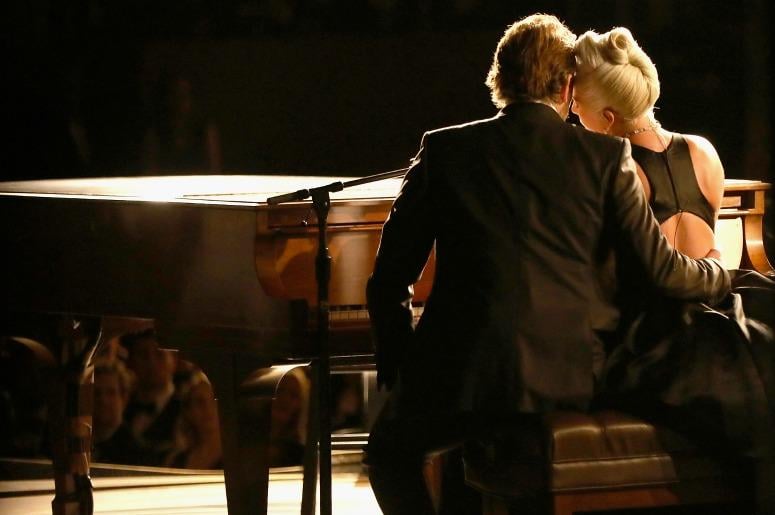 Huzzah! Last night, the Oscars red carpet was the most daring we have seen in years, with stars breaking free from safe bets and taking dramatic sartorial risks. Just for fun, Elizabeth Holmes shares seven of the most compelling fashion moments… 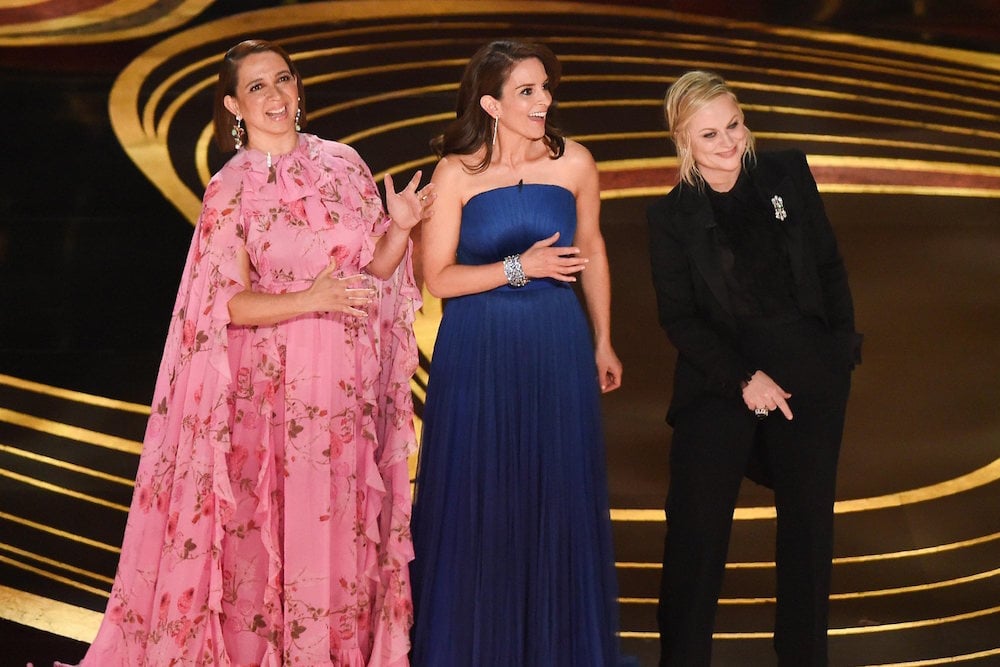 Best Trio
As soon as the iconic trio of Maya Rudolph, Tina Fey and Amy Poehler took the stage of this year’s host-less Oscars, the entire world (or maybe just all of Twitter?) wondered aloud: why weren’t they the ones given the reins? Still, the three women’s dresses forecasted the range of what we were about to see: the expected, the surprises, the delights. Tina wore a classic Oscars look, a strapless blue Vera Wang gown with a hint of a train. Maya kicked it up a notch in a floral Giambattista Valli dress with a full cape, her blunt bob serving as the backdrop for those a-maz-ing statement earrings. And Amy was all Amy in a black Alberta Ferretti tuxedo — with tails! I especially loved her brooch (an accessory category that deserves a comeback IMO). Nothing about what they were wearing went together — I’m guessing there was zero coordination by their stylists ahead of time — and I love that. Do you, ladies. 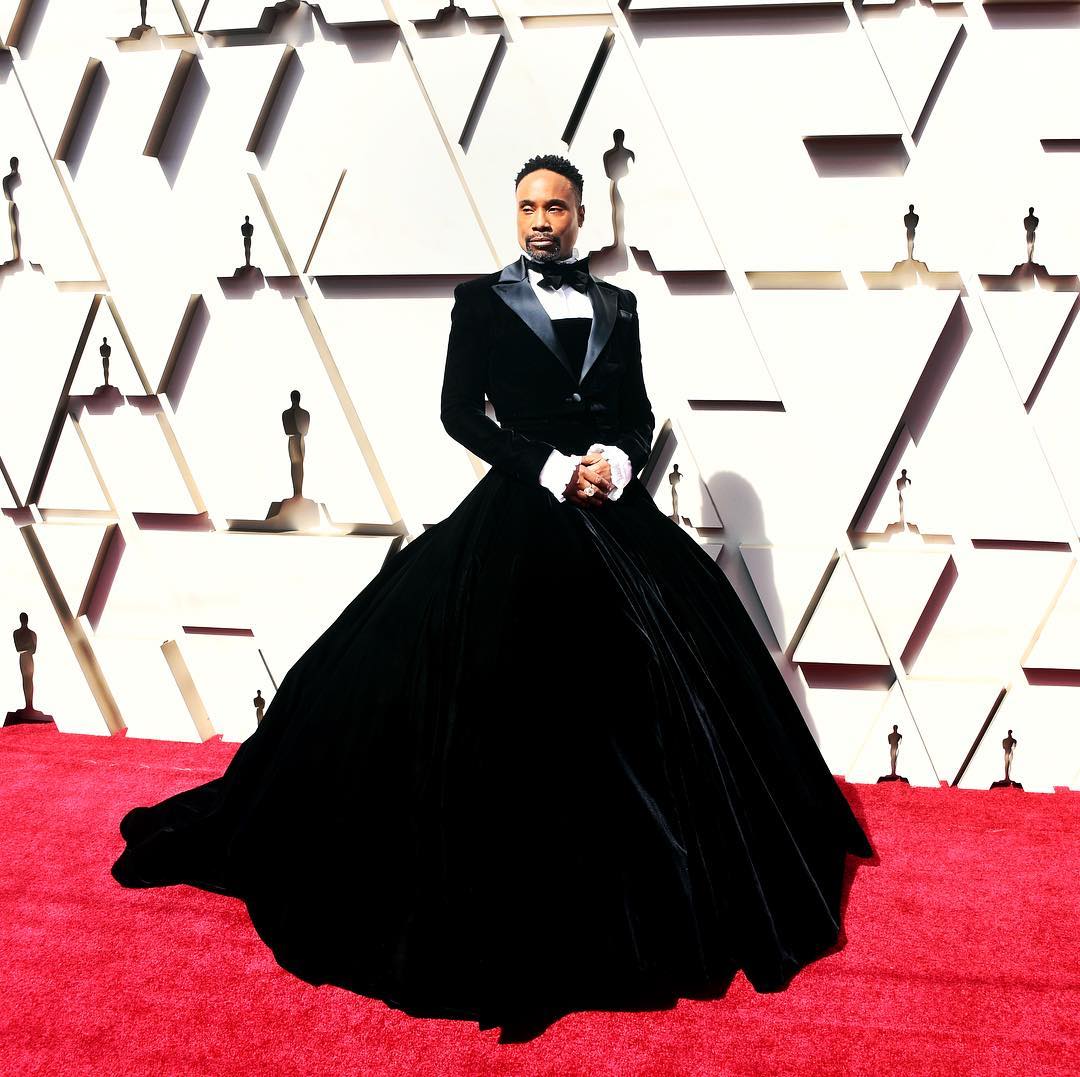 Best Big Moment
Before any of the nominees set a stiletto on the red carpet, Billy Porter went and stole the whole damn show! His gender-bending ensemble, by Christian Siriano, proved there’s no need to choose between a tux and a gown. The designer told E! News that he had just a week to create the strapless dress, worn over a tuxedo shirt, as well as the double-breasted jacket on top. Props to Billy, who served as a host on ABC’s Oscars coverage, for his work navigating the red carpet in that fuller-than-full skirt. “Call me Cinder-Fella,” he wrote on Instagram. DONE. 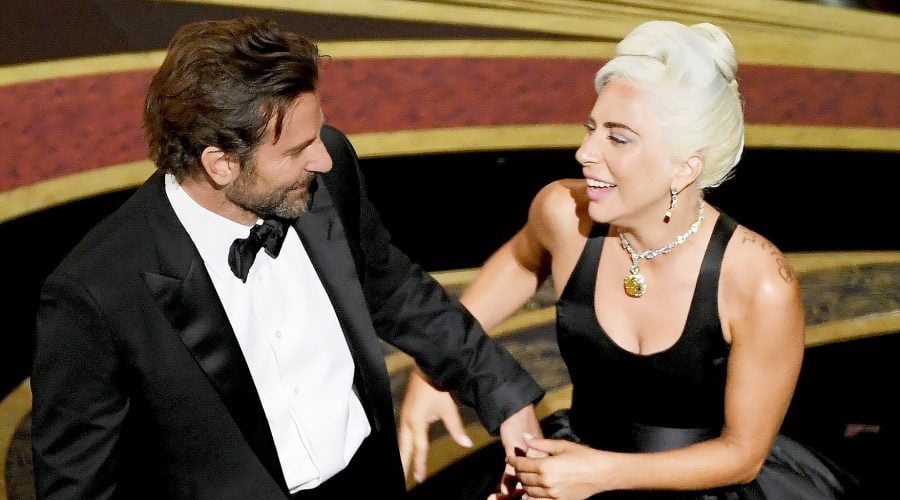 Best Bling
OMG, yes, Lady Gaga won an Oscar. And OMFG, yes, she gave a hell of a performance with Bradley Cooper. (Are you still flushed? Because I’m still flushed.) Not to be overshadowed in all of this: that necklace! The actress wore a 128-carat Tiffany sparkler, one of the largest yellow diamonds in the world; this was only the third time it has ever been worn in public. Gaga changed gowns (both black and minimal) between the red carpet and her performance, but kept the rock, obvi. I found myself scanning for the inevitable necklace security team that you know had to be steps away from her at all times.

Best Pink Dress
Picking a favorite pink dress is like picking your favorite candy, so I’m going to cheat and celebrate two fabulous women. First up is Angela Bassett in a hot pink Reem Acra gown with an exaggerated single shoulder. And of course Dame Helen Mirren slayed in Schiaparelli, not surprising given a bold pink is the famed design house’s signature shade. I just about died when Helen — who is 73! Gah! – gave the ombré pleated skirt a twirl for the cameras. 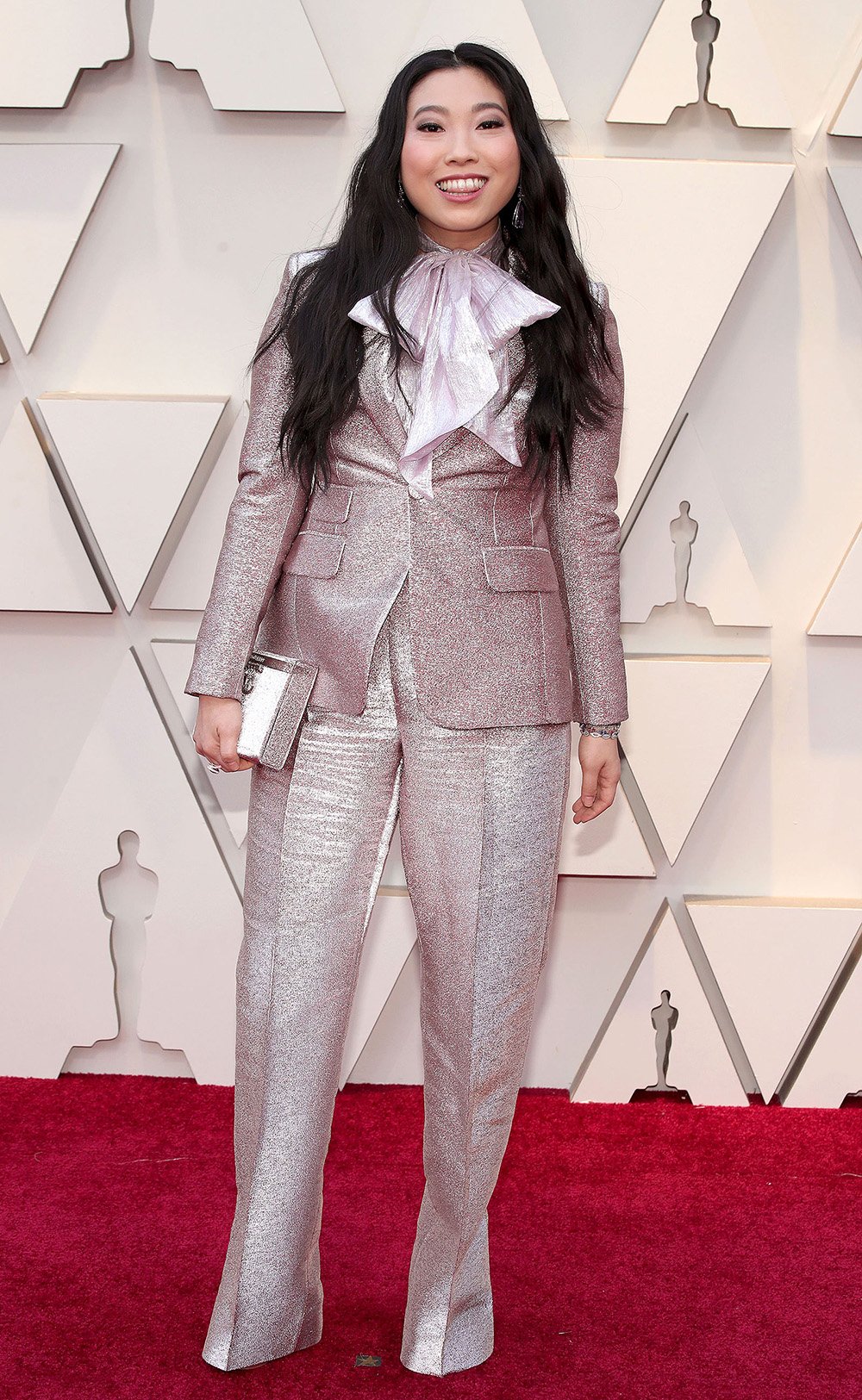 Best Power Suit
Before the 2018 Academy Awards, I asked several top Hollywood stylists why more women didn’t wear trousers on the red carpet. Their answers varied, but all sensed a sea change and Sunday proved them right. Several women opted for pants, and my favorite, by far, was Awkwafina’s sparkly lilac DSquared ensemble. I had fallen in love with her amazing costumes in Crazy Rich Asians and had high hopes for her as a presenter last night. The extra-long flare trousers and the exaggerated pussy bow blouse made for a striking, stellar look. 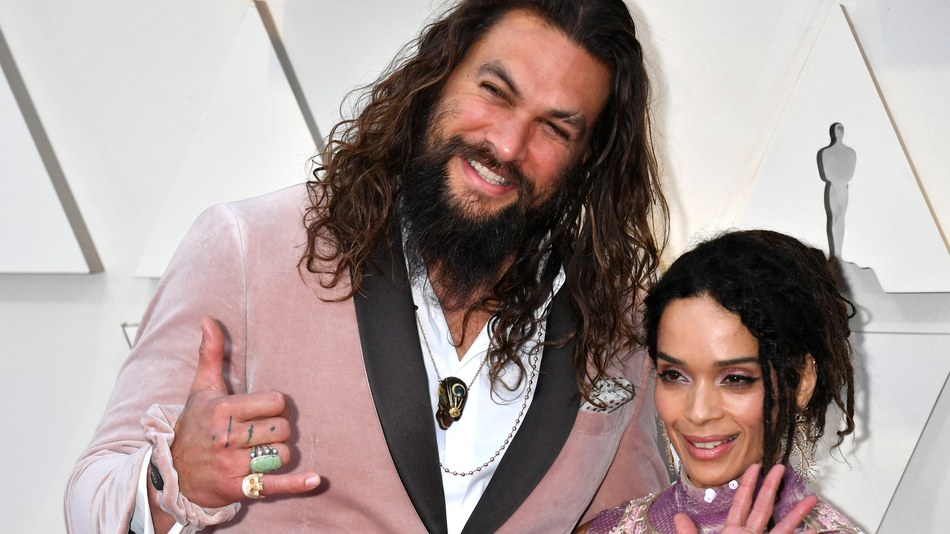 Best Hair Accessory
This has been a big year for men’s red carpet fashion, with many male celebs breaking out of the bland black tux box. Sunday evening, Aquaman star Jason Momoa was an immediate standout in his dusty pink Fendi tuxedo. But it was the matching designer scrunchie — yes, a Fendi scrunchie — on his wrist that had the Internet ablaze. It was at once stylish and practical. Who among us doesn’t have a hair tie close at hand for ponytail emergencies? 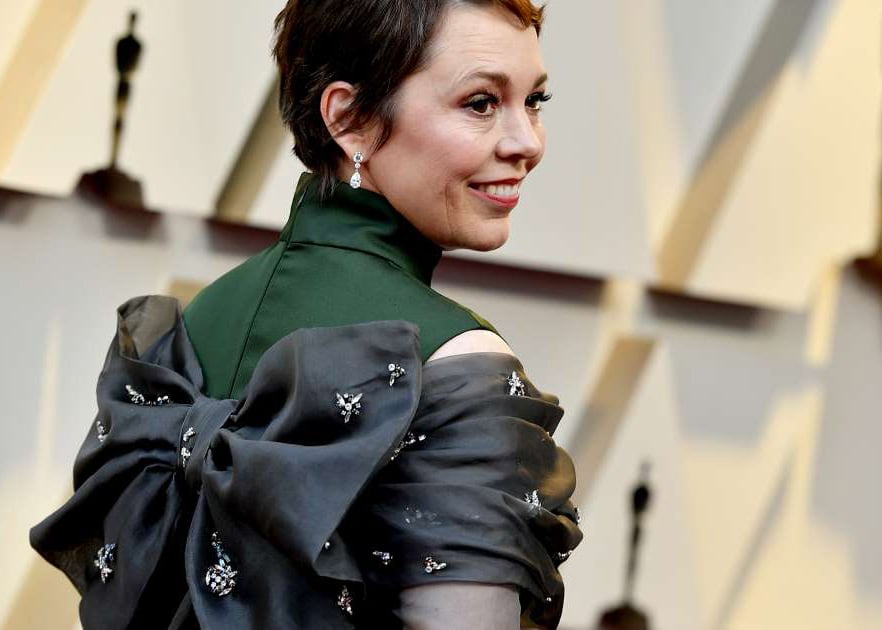 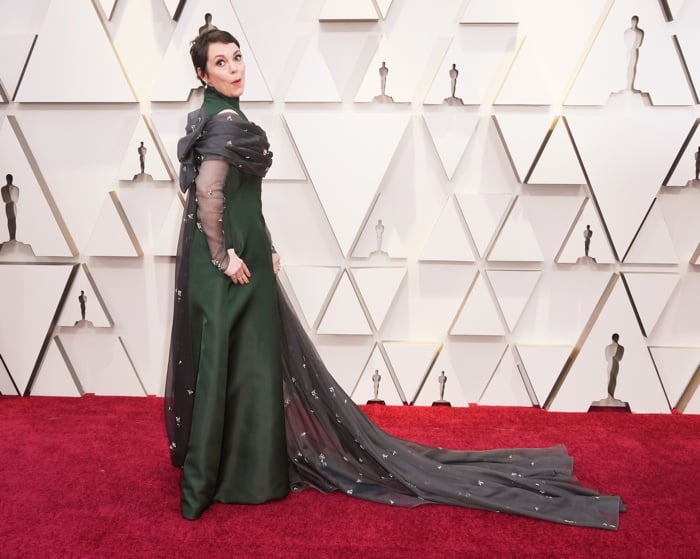 Best Bow
A major trend this season has been bows — so I had a hunch we would be seeing some Sunday night. There were no hair bows (le sigh!), but we had more than one dress bowment. I was most struck by the Prada gown worn by Olivia Colman, who won best actress for her leading role in The Favourite. The oversize bow was barely visible from the front, giving off a cape-like vibe. From the back, however, it was all you could see, with its tails melting into a train. The bow was Olivia’s idea, serving as a punctuation on her surprise win and endearing AF speech. It makes me even more excited to see her take on the starring role in the next season of The Crown. Long live the Queen!

Plus, an honorable mention from Caroline: 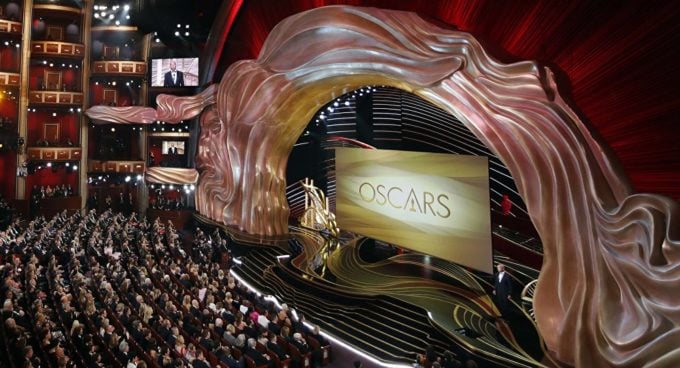 The Set
Let us take a moment to address the stage. While rumors have been swirling that the set resembled Marilyn Monroe’s wig, or was modeled after Trump’s hair (what?), when I look at the 2019 set, I see but one thing: a massive vagina, birthing awards. To me, the resemblance is unmistakable. In the end, the Oscars stage is like a Rorschach test, allowing us all a little glimpse into the depth of our psyches. So, what did you see?

What were your favorite moments of last night? Did you watch?

P.S. The 8 real winners of the Oscars last year.

My favorite dress was Hannah Beachler hands down. So daring, beautiful and eye-catching.

I loved Yalitza Aparicio’s dress too. So tasteful and elegant. And she simply glowed. I have so loved watching her blossom following the success of Roma.

Gosh that’s a tough name to have right about now!

I am in love with Olivia Colman’s dress. In true Prada fashion, it is the cool nerd girl look. The color was unexpected. The black sleeves, bow thing was beautiful. Just loved how cool it was. Just like the woman wearing it.

Elizabeth Holmes does it again! My obsession with SMT is a real thing and currently affects my daily life. I am continually refreshing Instagram for her thoughts on all things royal (#teamboth) and bows. It made my day when I saw this article by her. Can I also be #teamboth for Gaga & Irina? Thank you, Cup of Jo, for supporting my Elizabeth Holmes addiction!

Yes to all of these, but especially the vagina stage. Definitely my first thought, too!

I think Kiki Lane has the most amazing pink dress.

Long live the Queen? LONG LIVE ELIZABETH HOLMES! Seriously. I hope I don’t sound like a creeper, but your wonderfully readable/relateable writing has made following the royal family a joy (#teamboth, obvs) and you are such a clear writer, which is so, so rare on Instagram!! Thank you, Cup of Jo! Now I don’t have to just keep refreshing Instagram Stories for my @eholmes fix!

All I can say is my woman crush Helen Mirren and my man crush Jason Momoa were together, looking AMAZING in pink, and I died. And no one, ever again, gets to tease me for my scrunchie addiction!!

I also loved Amandla Stenberg’s dress. I read she’s just 20 (I thought she was younger), but it seems like she has her life so-well pulled together, and not just because of The Hate U Give.

I’m happy for Lady Faga, I think she’s an awesome artist and singer.
This said, please let me say, there’s no need to write ‘OMFG’. This is a very polite blog that I love. I know it might be just a way to express surprise, but please, don’t. Don’t write it.
Thank you.

Very much this. Thanks.

Is that F causing anyone to feel unsafe? Or ostracized? Or is it historically used against oppressed groups? Is it used discriminately against only one race, or gender, or ethnicity? Is it a part of a history of genocide or oppression? Are there small children reading this blog? Does Dame Helen Mirren use it pretty frequently?

Others are just as offended by the G in that exclamation I think. Perhaps we can take what works for us and leave the rest, barring something causing actual harm. I didn’t even notice until you pointed it out.

I don’t think I’ll ever stop feeling shocked and surprised when readers of a blog step in to try to exert control via language policing, content policing, etc. I really just do not understand. The way you talk and write isn’t the way everyone talks and writes. This isn’t your space to control. You always have the choice to look away from a word you don’t like, or choose to see it and disapprove but let it go, or even choose to go looking for other, more-polite places on the internet that will more closely adhere to your preferences or values.

Hi Karen, thanks for your comment. I am the first one to curse when needed, I assure you that I do. But I don’t like blasphemy, maybe it’s a cultural thing. Don’t think of it as stupid bigotry or me trying to control this. You say that this is not my space, but I think that CoJ belongs to its editors as well as its readers. Yes, I can go and read something elsewhere, but I love this blog a lot. Objectively, that F referring to God, is not pleasant to read or hear. I insist, it’s not a matter of bigotry, it’s something that it’s not nice to read, especially here in this beautiful place.
Again, I am the first imperfect person to curse and say F*CK when needed, but I don’t use blasphemy.
Thanks again Karen, without any kind of disrespect, I wish you a nice day. :)

OMFG only has the meaning you give it. When you see those letters you can make them stand for anything. Oh My Flipping Goodness, Over My Farting Goose, On My Filthy Garbage, etc.

Linda, your exclamations made me LOL. I’m always trying to come up with funny and non-sweaty “curses,” you’ve done a great job with these ideas!

@Linda: Over My Farting Goose LOL ? Thank you Linda!!

The Fashion Critical albums on the Oscars and after parties are THE BEST EVER.

The red carpet was terribly underwhelming. I was so disappointed. I’m glad, though, that Regina King is finally getting the recognition she deserves. About time. I’ve been watching her since I was a child.

Constance Wu looked just like Belle from Beauty and the Beast. I demand a remake!

I definitely saw a vagina!! I was thinking that throughout the whole show!

Julia Roberts’ pink dress won the night for me.

YES. Her pink dress was AMAZING!

YES! I second this heartily.

Best dresses Charlize Theron and Julia Roberts, worst dresses too many to name. I’m a little worried about where fashion is headed this year!!! k

I don’t watch the Oscars, but I have to weigh in: yes, clearly, vagina.

I could have sworn I heard Lisa Bonet (sp) say her and Jason’s clothes were Karl Lagerfeld, from his mostrecent or last release? No bother, just curious now. :)

Yes! Lagerfeld designed it for Fendi. So both are right!

I enjoyed Gemma Chan’s pink dress but Sarah Paulson’s was amazing! Structural but soft. Unique. And pockets! All hail to pockets.

Sarah, Did you see the article that mentioned that Gemma put cookies and rice crackers in those pockets? swoon. https://www.thekitchn.com/gemma-chan-oscars-dress-cookie-267256

No…I didn’t get anything going on between Gaga and Bradley Cooper…I saw acting and some genuine affection. I agree with those who are over setting two women against each other fighting over a man…what is wrong with us?

Julia Roberts rocked her HOT PINK dress. It was a super lovely color for her and brightened up her whole face and coloring!