Comedian Amber Ruffin Is Nailing It 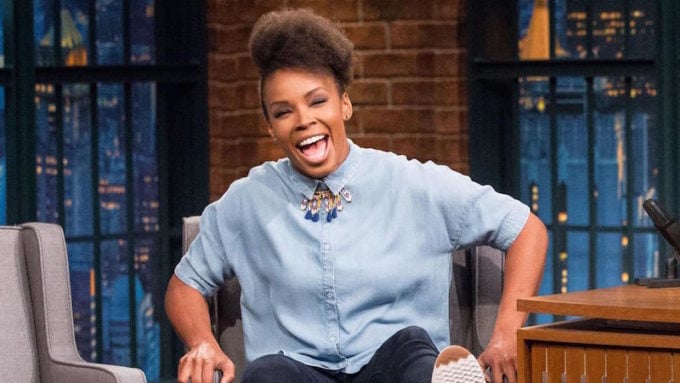 …the segment Amber Says What on Late Night with Seth Meyers? My friend Erin just introduced me to the hilarious Amber Ruffin, who recaps the week’s news and then adds “what?!” in different intonations. (Awesome side note: In 2014, Amber became the first black woman to write for a network late-night talk show.) She’s frank and brilliant, and we were falling off our chairs laughing.

“I honestly believe that before you crash and burn in a show, you will never truly be a fearless performer,” she said in an interview. “You spend so long trying not to embarrass yourself. Once you have the worst show of your life and survive, you know it’s not that bad. Then, you become this fearless, shameless weirdo version of yourself that turns out to be who you really are.”

(That advice actually works for life, too, don’t you think?)

(Photo of Amber Ruffin by NBC, via The Chicago Tribune.)

Tags: makes us laugh
53 COMMENTS
WRITE A COMMENT
Design
most popular
01
My Sister’s Home Makeover
02
What Are Your Top Three Books?
03
The Ultimate TV Guide (If You’re Looking for Something Great)
04
Catherine Newman’s House Is a Joyful Jumble of Books, Games and Cats
05
Behind the Scenes: Making a Magazine Cover
May We Suggest…
By Caroline Donofrio
Design
The 10 Real Winners of the Oscars
February 10, 2020

She’s hilarious!!! Thanks for sharing, since I rarely watch late night.

She is so hilarious! I sent this link to my husband – a white man who teaches in an all black school in inner-city Atlanta. He watched some of these clips with one of his classes today, and they all LOVED it (him included)!

SO good! Husband and I watched her you tube videos last night after the kids were in bed. Laughed so much. Thanks for sharing!

I LOVE her. Everyone: quick – go look up her bit “How Not to Laugh at Jeff Sessions”. I can hardly breathe from laughing!

Too much shrieking for me. Thanks anyway.

Is it just me, then, who goes through an extremely unpleasant experience and goes “well, let’s do everything possible to avoid experiencing that again”? Yes, it didn’t kill me, but that *really* doesn’t mean I’m enthused by the prospect of repetition…

That said, a comic set falling flat might be more traumatic in expectation and less traumatic in reality than some of the things I’m thinking of. Or maybe I’m just a pain-avoidant chicken.

Thank you so much for bringing this into my life!!!

She truly never fails to make me laugh out loud. My favorite segment with her is “Jokes Seth can’t tell” because the chemistry between Amber, Seth and Jenny (another writer) is perfect and the punchlines are pure gold.

I love pretty much everything about LNSM but Amber is THE BEST!

I perform improv comedy and that “failing and surviving” part is why I love it so much! One of my previous groups used the mantra, “nobody dies.” Sounds morbid at first but it’s a great reality check.

Sometimes when I’m afraid to do something, I think of myself like a toddler throwing a fit because she’s CONVINCED she’s gonna hate broccoli before she’s even taken a bite. I think in adulthood we tell ourselves that the stakes are higher when they actually kind of aren’t. Just try one bite, and if you don’t like it, the world keeps spinning, nobody dies. In the context of a comedy show, that means the audience doesn’t laugh and there are strained moments of silence and you are haunted by some line you pulled out of nowhere that sounded bizarre. But the ripples don’t extend out beyond that. You just pick yourself up and try again in a few weeks.

Just spent my entire evening on an Amber Ruffin deep dive on YouTube. She is amazing! Hilarious, smart, adorable… Thanks for the post!!

Love her! She was so adorably funny on Drunk History.

Where have i been? She is the best. Glad to know about her!!!!

She is so hilarious! A while back, I heard an interview with Sasheer Zamata discussing when SNL went through that phase where they explicitly were trying to add a black female cast member. They did showcases for black female comedians and Zamata (the one who ultimately made it on SNL) was talking about how powerful and amazing it was to see all of her sister comics all in one space together, because many of them knew of each other, but hadn’t shared a space like that till that point.

I remember her saying that Ruffin was one of the finalists, and while she didn’t make it on the show, it looks like she at least caught Meyers’ eye when he was hiring for his show, and thank goodness for that!

I just discovered this segment a month or two ago and spent my night watching every “Amber Says What?” and “Jokes Seth Can’t Say” clips I could find. Go Amber!

speaking of female comics, have you seen the Marvelous Mrs. Maisel?! AHHHHHHMAZING

yes, so good!!!!! loved it x a million. also, it was so cool how it was acted/styled like a play. even the street scenes were beautifully choreographed. loved the main character so much and want to be her friend. ;)

Amber is hilarious, a talented comedian. It is amazing she’s so spot on! Her facial expressions speak volumes.

Also, her “karma’s a bitch:” I was, like, how could she possibly look any better than she already looks, and then I died.

Yes! Second this! She needs her own show.

I want to like this…but I find her really grating.

I agree. I couldn’t get though 30 seconds of it. Her bitterness and overt taking of the moral high ground are grating, indeed.

got a pretty good laugh at Jessica’s comment below.
Must be hard to have a gaping void where most people have their sense of humor

It isn’t that I find her bitter- I just literally find her voice grating and irritating. And the “whaaaaaat” thing just…doesn’t do it for me. But hey– to each their own!

Whaaaaaat have I been watching instead of Amber?! She is great & I love this.

I never watch late-night TV, but these clips are my new favorite thing in life.

This is so brilliant!

Ha! That was great. I remember her from Drunk History but never would have spotted this segment, since I don’t want late night shows. Also, as someone who works in a creative field, that quote really hit home.

Haha, I need more of these to watch! She’s great!!

I LOVE her so, so much. Echoing another commenter, the segment: “Jokes Seth Can’t Tell” is also a hilarious showcase for her and fellow writer Jenny Hagel. I want her to get her own show!