A Winter Guide to NYC 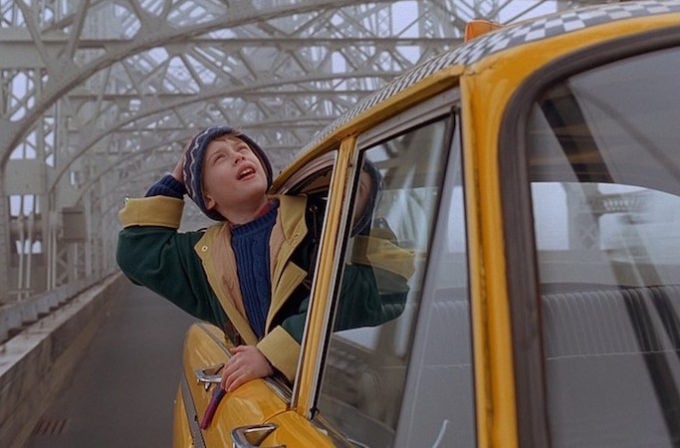 This time of year, readers often ask for suggestions of things to do in New York City when it’s cold outside. So! Without further ado, here’s a list of more than 20 awesome activities, restaurants and holiday fun we’d recommend in the winter (and please add yours)… 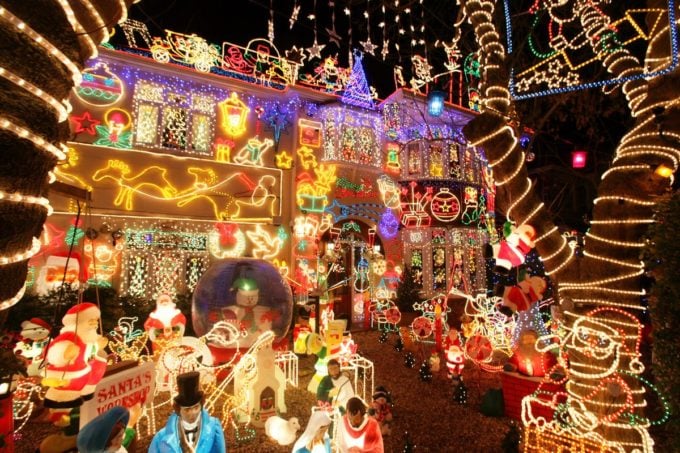 1. Be Dazzled by the Lights
One of New York’s most jaw-dropping holiday displays is in Dyker Heights, Brooklyn, where dozens of family homes between 11th and 13th Avenues, from 83rd to 86th Streets, go ALL OUT with decorations (think: massive inflatable reindeer, entire houses draped with lights, and “Let It Snow” blasting from loudspeakers). It’s completely over the top in the best way, and makes for a lovely bundled-up winter walk.
Insider tip: Warm up afterward with some of the most delicious Middle Eastern food city-wide, at Tanoreen in nearby Bay Ridge (order the Brussels sprouts with tahini!), or visit Sunset Park, another adjacent neighborhood, for noodles in bubbling broth at Mister Hotpot. 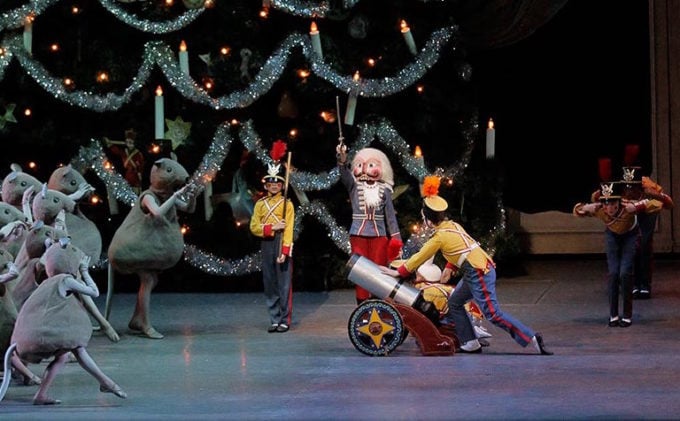 2. See the Nutcracker
There’s no more classic holiday activity than a performance of the Nutcracker by the New York City Ballet. It’s magical even for adults, but the 2 p.m. matinee shows are well-timed for kids — and nothing is cuter than hearing the collective gasp at the Mouse King.
Insider tip: If you’re hungry, order meatballs-with-a-cult-following at Parm, or pick up the best chocolate chip cookies in the city (the world?) at Levain Bakery or Jacques Torres. 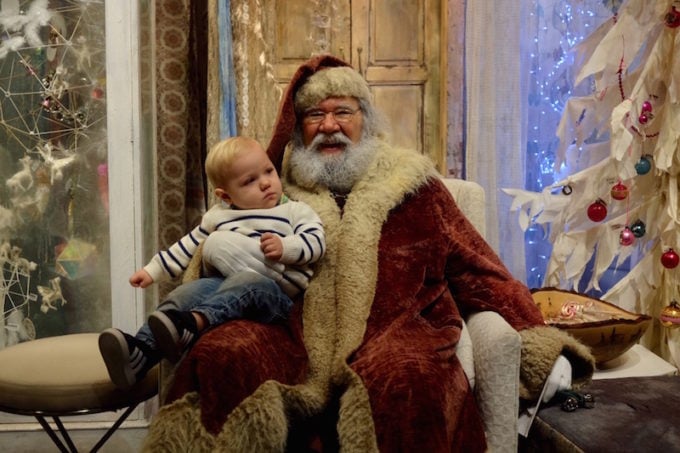 3. Meet Santa at ABC Carpet & Home
Guys, this is the REAL Santa! For 20 years, he has been parking his sleigh at the Flatiron store on weekends to the delight of one and all. You can catch him this year through December 17th.
Insider tip: The lines get long, so try to arrive half an hour before opening time. You can get a cup of hot chocolate, with a homemade marshmallow, from nearby City Bakery to keep you cozy while you wait. (Also, keep your eyes peeled. You might spot some celebrities and their kids in line — our friend Linsey chatted with Jenna Maroney from 30 Rock one year!) 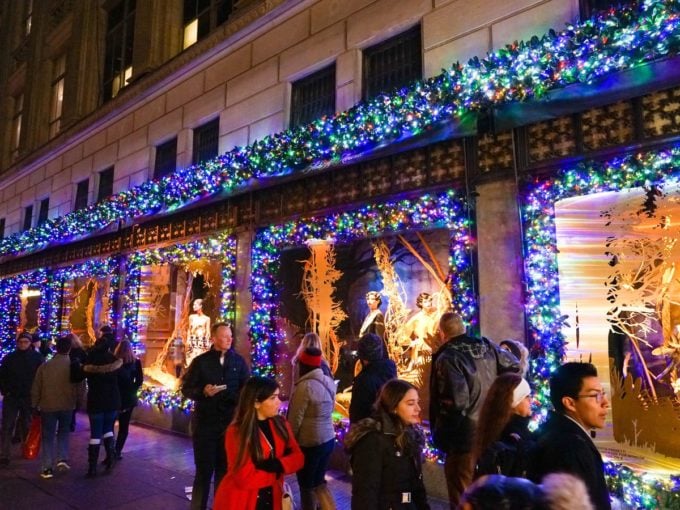 4. Browse Department Store Windows
Manhattan’s biggest shopping district is crowded this time of year, but it’s worth strolling by the stunning window displays of the department stores — all of which pick a theme and REALLY run with it. (This year Bergdorf’s is “To New York With Love,” with Swarovski crystal-encrusted dinosaurs from the American Museum of Natural History.) One easy walk is to start at Saks Fifth Avenue, and then go past Henri Bendel, Tiffany’s, Bergdorf Goodman and finish at Barneys.
Insider tip: Try going after dinnertime to beat the tourist crowds, and grab a swanky cocktail afterward at the Upper East Side’s Bemelman’s Bar. 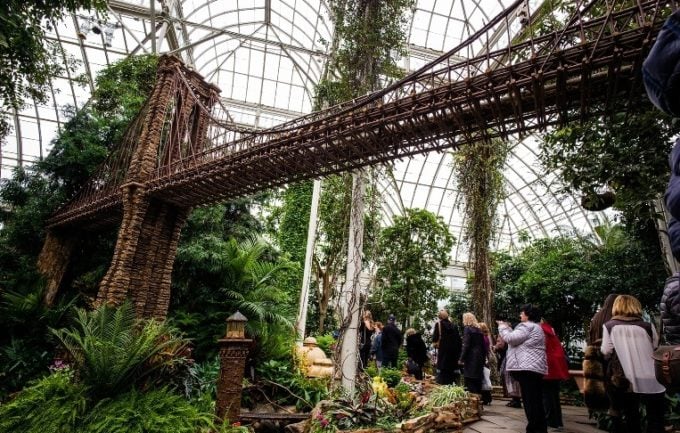 5. Explore the Botanical Garden’s Train Show
Watch small model trains zip around a display of more than 150 quintessential New York landmarks (Statue of Liberty, Brooklyn Bridge, etc.), all made out of natural, fragrant materials from the gardens.
Insider tip: The Botanical Garden’s holiday cafe has an awesome old-school bake sale vibe (fresh brownies, cookies and fudge); or for a bigger adventure head to Arthur Avenue, the Little Italy of the Bronx, for eggplant parm or Sicilian pizza. 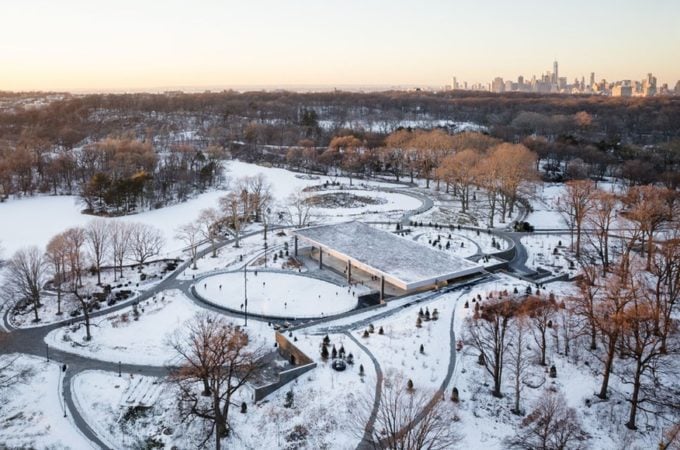 FIVE OUTDOOR ADVENTURES TO GET YOUR CHEEKS ROSY

1. Go Ice Skating at the LeFrak Center
Rockefeller Center’s rink may be iconic, but it’s seriously crowded. Instead, escape to the LeFrak Center in Prospect Park, where you’ll be surrounded by tall swaying trees. The skate rentals are also less expensive and less battered!
Insider tip: Keep an eye out for the local curling team; they sometimes nab a corner to practice for a meet. 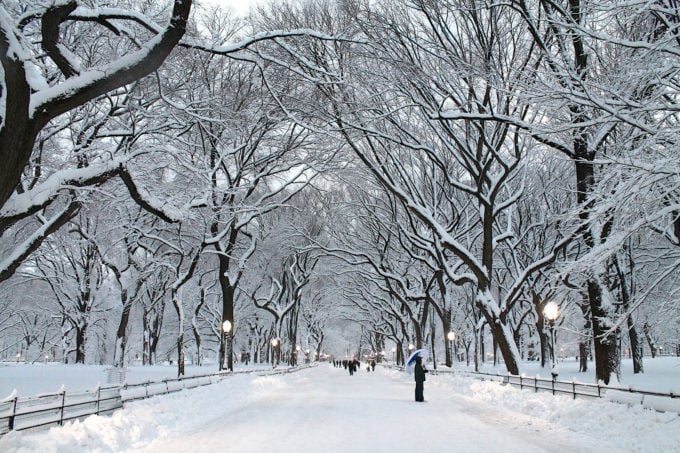 2. Stroll in Central Park
Did you know that in Central Park’s early years, winter was its most popular season? Perhaps 19th Century New Yorkers were a hardier bunch, or maybe it’s just because they wore these cozy things. A good route for a cold weather walk is starting at The Mall, a promenade running from 66th to 72nd Streets on the East Side with a canopy of elm trees, then passing by the Bethesda Terrace and the Fountain en route over to the West Side.
Insider tip: Check out a show at the Swedish Cottage Marionette Theatre, inside a quaint little house near the West 79th Street park entrance. 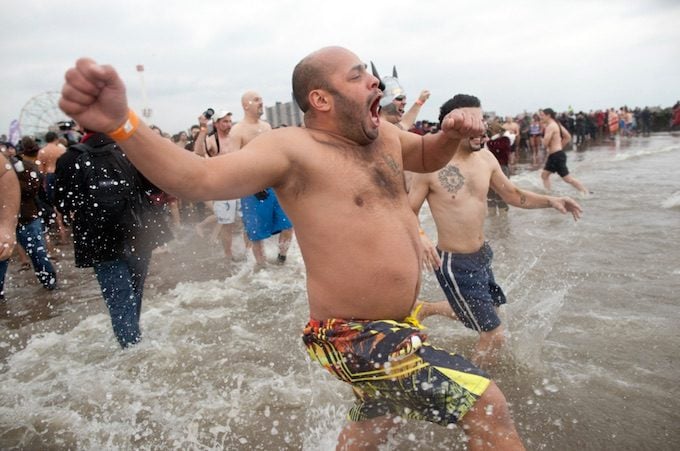 3. Take the Polar Bear Plunge (Ooooor Just Watch)
If you’ll be in town for New Year’s Day, head out to Coney Island for the fabled freezing dip in the Atlantic Ocean with hundreds of other brave souls, many of whom will be wearing costumes or funny hats.
Insider tip: We don’t have one. We have never done this because we are wusses! Good luck! 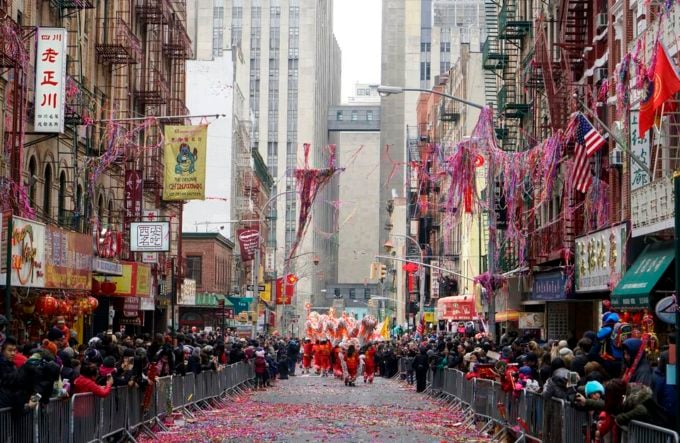 4. Celebrate the Chinese New Year
One of the most exciting neighborhood events in New York is the firecracker ceremony (plus magical dragon mask performances, elaborate floats, live music and a parade) that happens on the first day of the Lunar New Year on the streets of Chinatown, on East Broadway, Canal and Mott Streets, culminating in Sara Roosevelt Park. Mark your calendar for February 16, 2018, and prepare to ring in the Year of the Dog.
Insider tip: Practice wishing people a happy new year in Chinese. 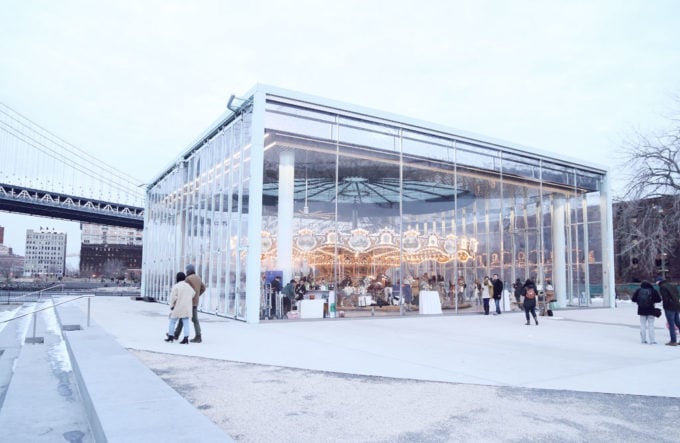 5. Ride a Carousel
There is something so romantic about Jane’s Carousel in Dumbo (those views of the Manhattan skyline!), and while it’s windy and cold on the waterfront, the Carousel is covered and heated.
Insider tip: Get a chocolate whoopie pie and steaming cup of tea at One Girl Cookies afterward. 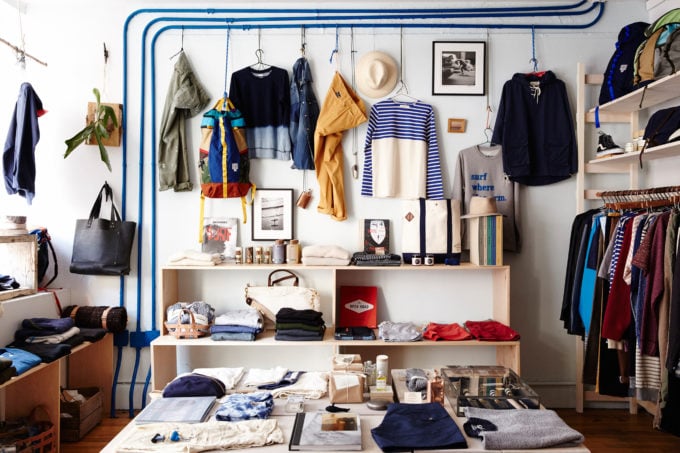 THE BEST BLOCKS FOR SHOPPING

New York City has eight million awesome stores, and it can be overwhelming. One of the nicest ways to shop is to just wander. If you have a free afternoon, we’d suggest exploring Nolita (SoHo’s more indie cousin). Start at McNally Jackson bookstore, and walk east on Prince Street before turning north or south on Elizabeth Street to stroll by cute cafés and boutiques. Don’t miss Cup of Jo favorites Clare V. (leather goods), Sézane (clothing), Everlane (their very first store, which just opened) and Erica Weiner (jewelry). We also enjoy Oroboro, Warm and Sigerson Morrison.
Insider tip: Snap a photo at one of the neighborhood’s colorful murals, like the Love Wall by James Goldcrown at 192 Mott Street. 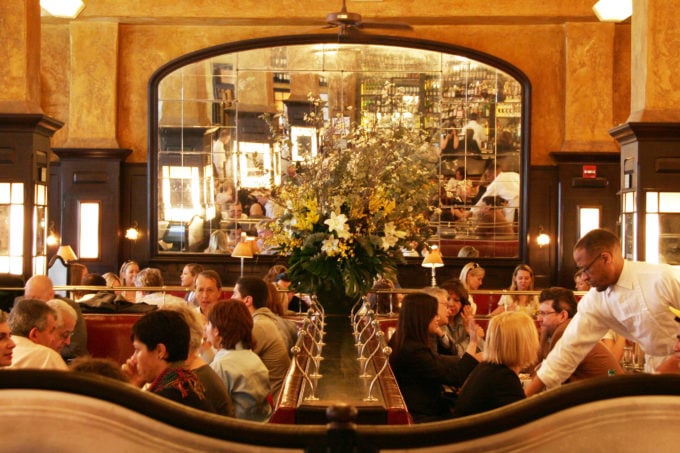 On a brisk afternoon or evening, you might want to tuck in for a meal somewhere with a toasty atmosphere. Here are a few inviting restaurants to consider:

Balthazar, Soho’s famous, bustling, never-gets-old French brasserie, anytime of day or night; Kiki’s Greek Tavern in Chinatown, where incredible food is served in an old paper shop that feels like a secret haunt; the Golden Unicorn, a Chinatown spot with the best dim sum and piggy buns for kids’ dessert; or the elegant Maialino in Gramercy Park for an epic cacio e pepe pasta dinner — or for breakfast, as a scrambled egg dish.
Insider tip: Pair any of these meals with a mani or pedi at Tenoverten. You can book online, and their multiple Manhattan locations have you covered. 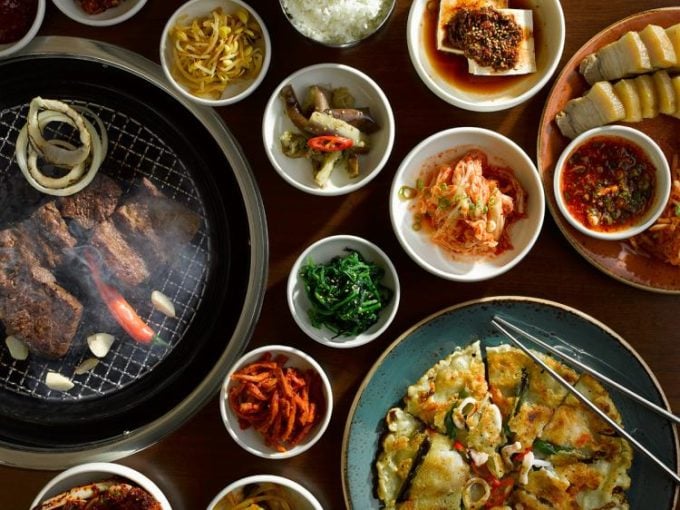 Insa for Korean BBQ in a beautiful Gowanus space (with karaoke!); Frankies Spuntino 457, the coziest Italian spot in Carroll Gardens (order the cavatelli); Roberta’s, no-joke pizza in Bushwick that’s worth the wait; or Williamsburg’s Diner, for a killer burger with homemade ketchup in a 1950s metal (you guessed it) diner.
Insider tip: Book an appointment for a warm steam at cityWell, the coolest co-ed spa in Brooklyn. Or, if kids are in tow, let them get their wiggles out at Recess. 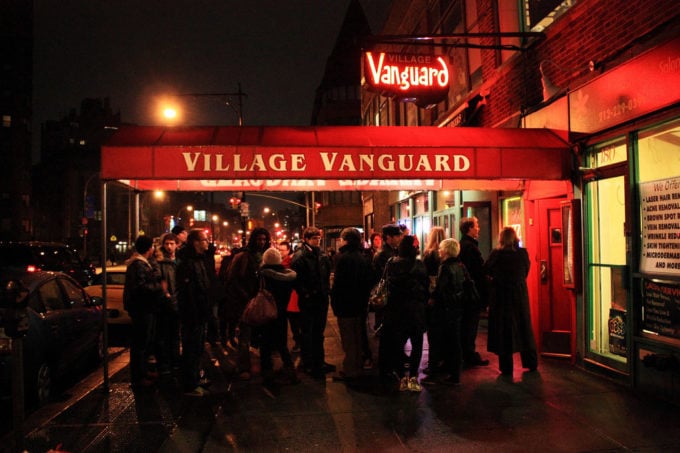 FOUR WAYS TO SOAK UP SOME CULTURE

1. Chill Out at a Jazz Show
Since 1935, the Village Vanguard has been one of the most popular places to see live jazz in New York, and with good reason: it books the best performers and has a perfect basement speakeasy vibe, especially on a chilly evening.
Insider tip: Put your name and phone number in at The Spotted Pig restaurant, around the corner, for their Devils on Horseback (warm Medjool dates wrapped with bacon) after the show. 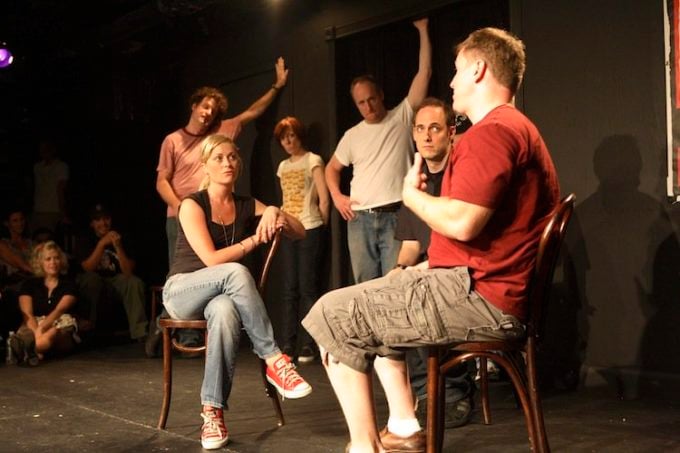 2. See Live Comedy or Storytelling
A few slam-dunk choices: The Moth, Mortified or the Upright Citizens Brigade’s Sunday evening improv show, ASSSSCAT, which was founded by Amy Poehler and regularly features comedy heavyweights from 30 Rock, Parks and Recreation and SNL. It’s so hilarious, the audience often sheds tears of laughter.
Insider tip: UCB is closed temporarily while they move into a new theater, but the schedule should be back on track shortly. It’s worth the wait! 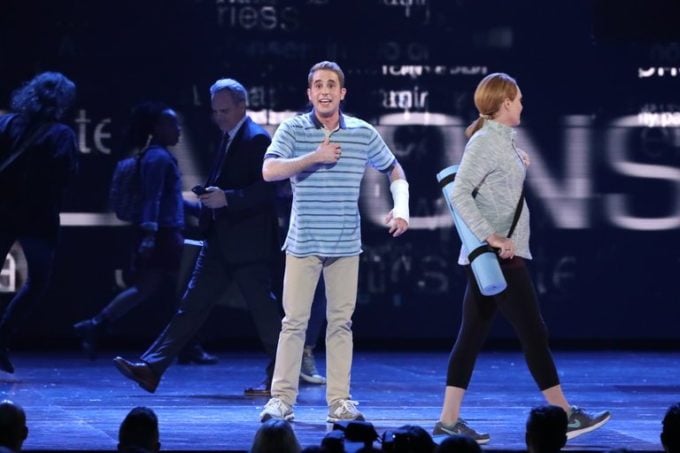 3. Get Broadway Tickets (Even on a Budget)
Seeing an award-winning play or musical surrounded by other enthralled humans is a balm for the soul. We recommend Dear Evan Hansen, Come From Away and Once on This Island — or consider the New York Times critics’ picks.
Insider tip: Check Broadway for Broke People for advice on the best ticket deals. “I saw a major Broadway show for $27 this past weekend,” raves our friend Matt. 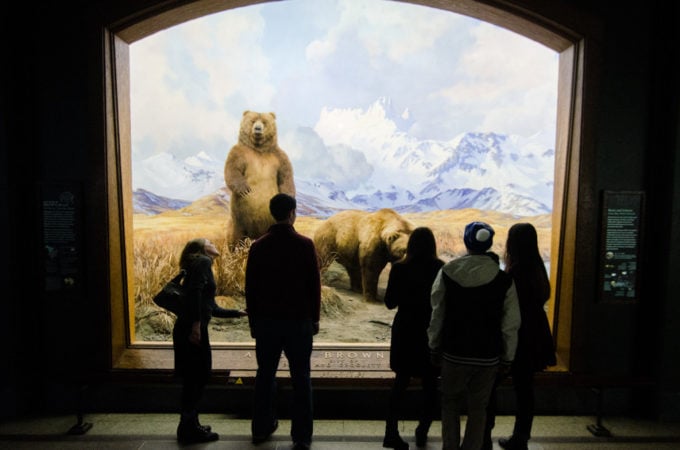 4. Stroll Through a Museum
There’s basically a New York museum to match any interest (oh, hey, Museum of the American Gangster). But our all-time favorites are: The Met (UES), a classic, of course; the Whitney Museum (West Village), in a gorgeous new building with one of the world’s best collections of contemporary American art; the Museum of Natural History (UWS), with its giant blue whale and a planetarium show that’s not to be missed; and the Tenement Museum (LES), which gives you a gripping window into New York history.
Insider Tip: If you have little dudes, our kids love Children’s Museum of the Arts, which is super bright and cheery on a winter day.

What would you add? We’d love to hear your recommendations. Maybe winter isn’t the total worst!

Have You Ever Traveled Alone?