A Week of Outfits: Kelsey Miller 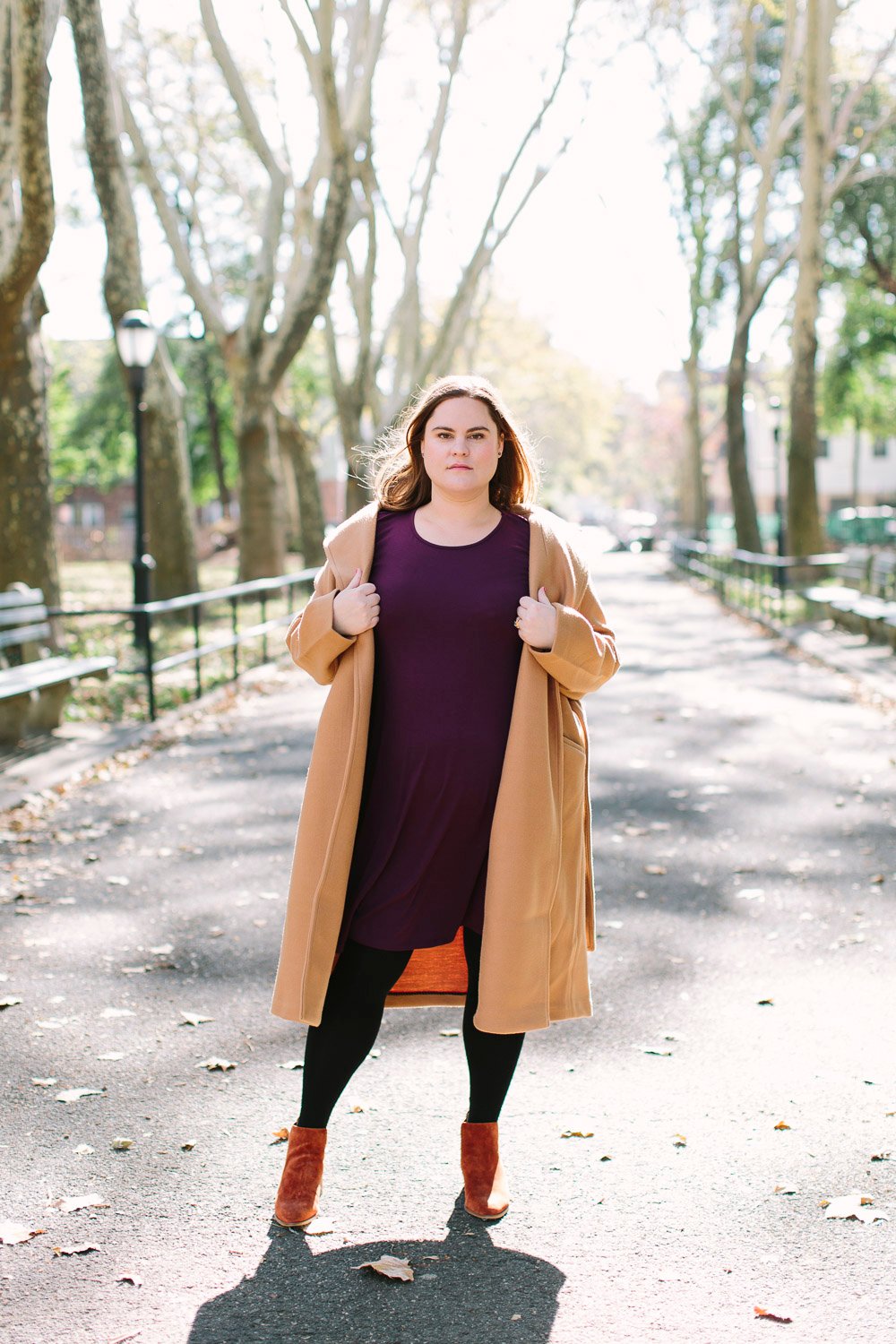 Kelsey Miller is the author of the witty and inspiring memoir Big Girl: How I Gave Up Dieting and Got a Life and a writer for Refinery29, where she launched The Anti-Diet Project. “I’m so damn lucky to get to be one of the people who writes about body issues,” she said. “One day, when all these problems are solved, I won’t write about it anymore!” Here, Kelsey shares five outfits she wore in a week… 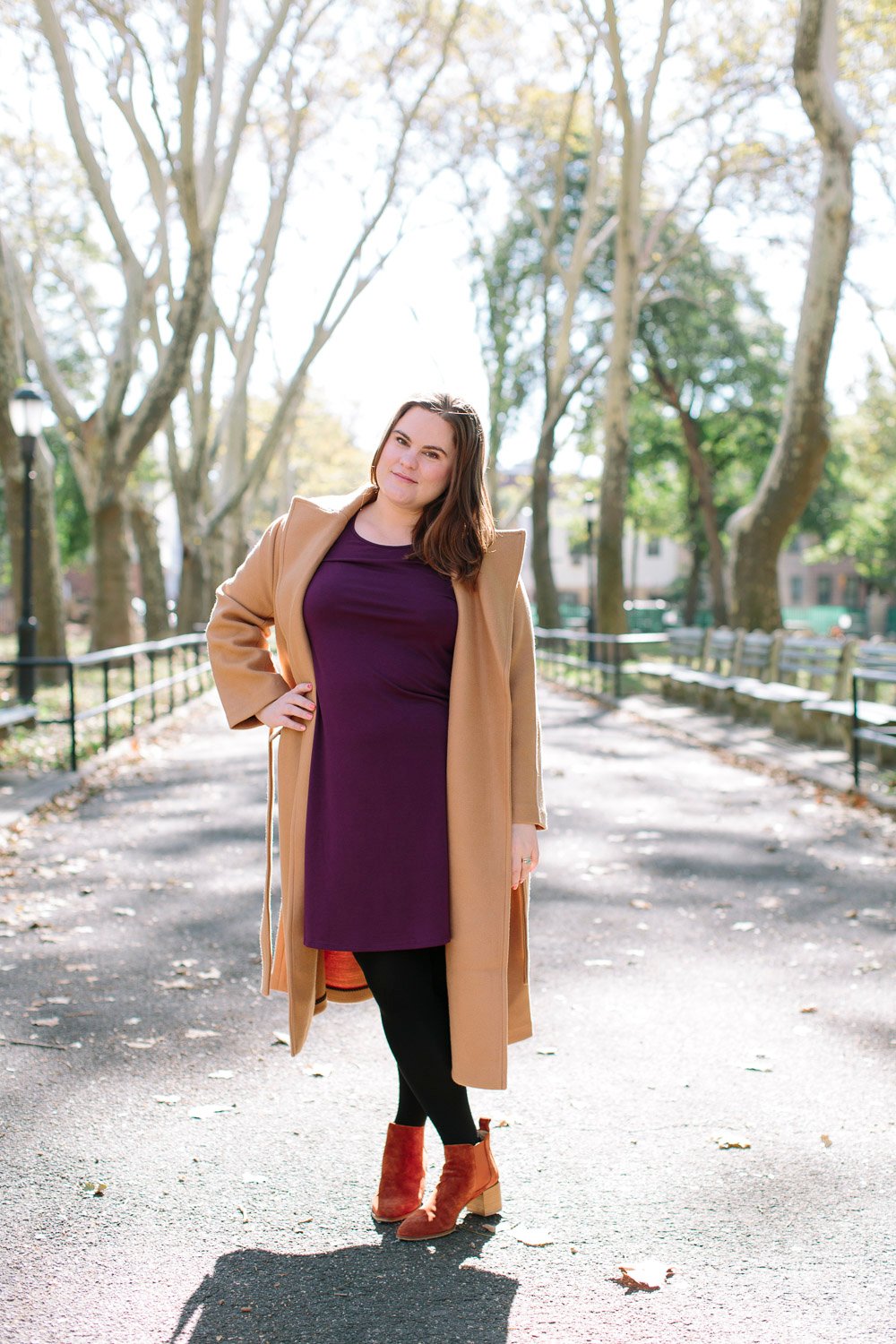 “This outfit looks pulled together but you feel like you’re in full-body sweats. I want to buy this dress in every single color. The boots are shockingly comfortable. And then THE COAT. That’s the coat I’ve been looking for from the very first time I watched Love Story at age 18. And here it is. I couldn’t be happier. You can just move in and live inside that coat, and yet it looks so chic. I wore this to work and then had dinner with my grandfather that night. It’s a work-to-grandfather outfit.”

“I work from home a lot, and for a long time I wore exclusively yoga pants and old T-shirts. But I realized that nicer clothes made me feel better. It was a form of self respect. I was actually sitting down to work, versus transitioning from pajamas to a slightly upgraded version of pajamas. There was once a tweet from Elizabeth Gilbert that was like, hey listen, put on a bra even if you work from home, even if you’re a guy!” 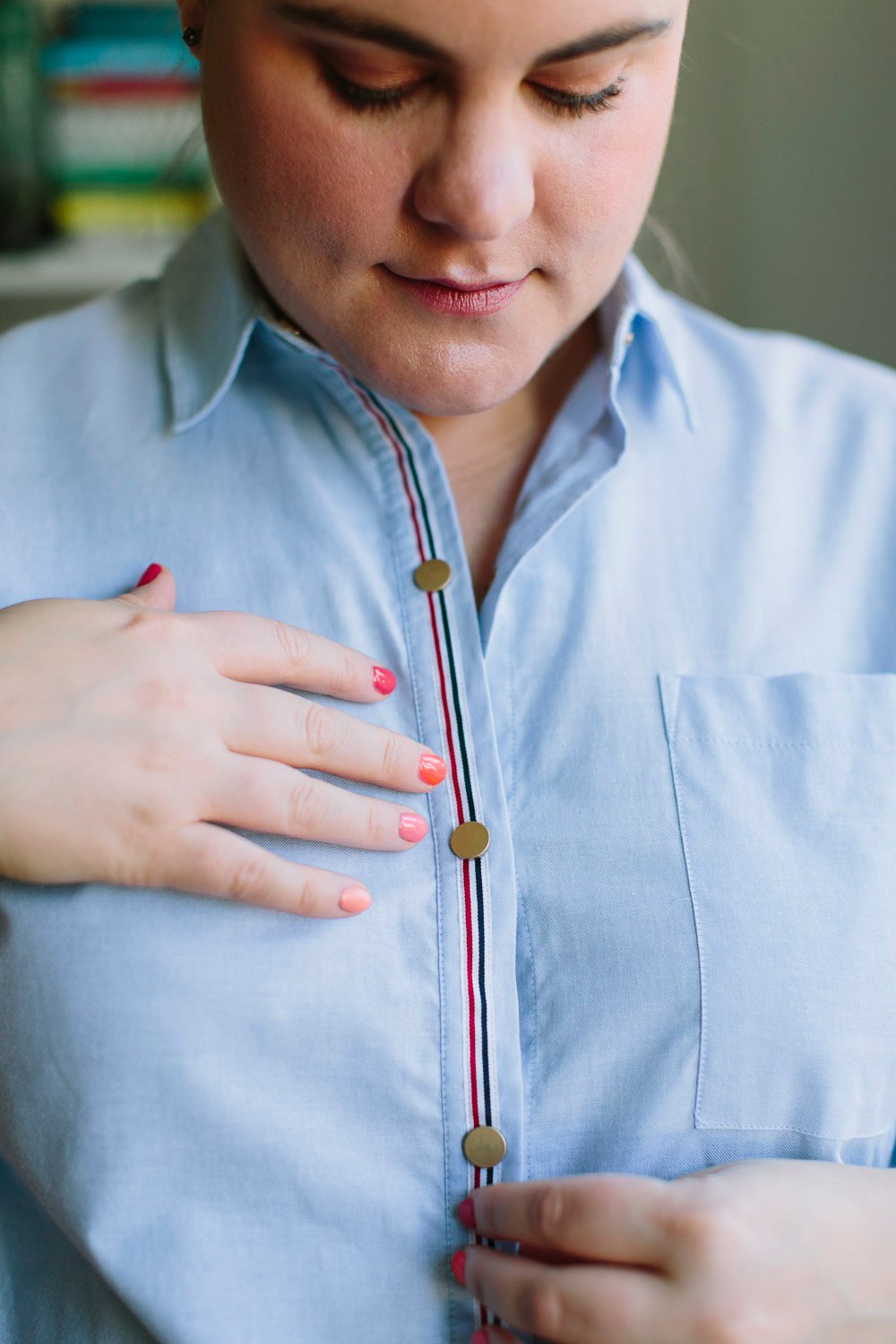 “For my nails, I wanted an ombre look, so I just picked five different orangey pinks at the salon.” 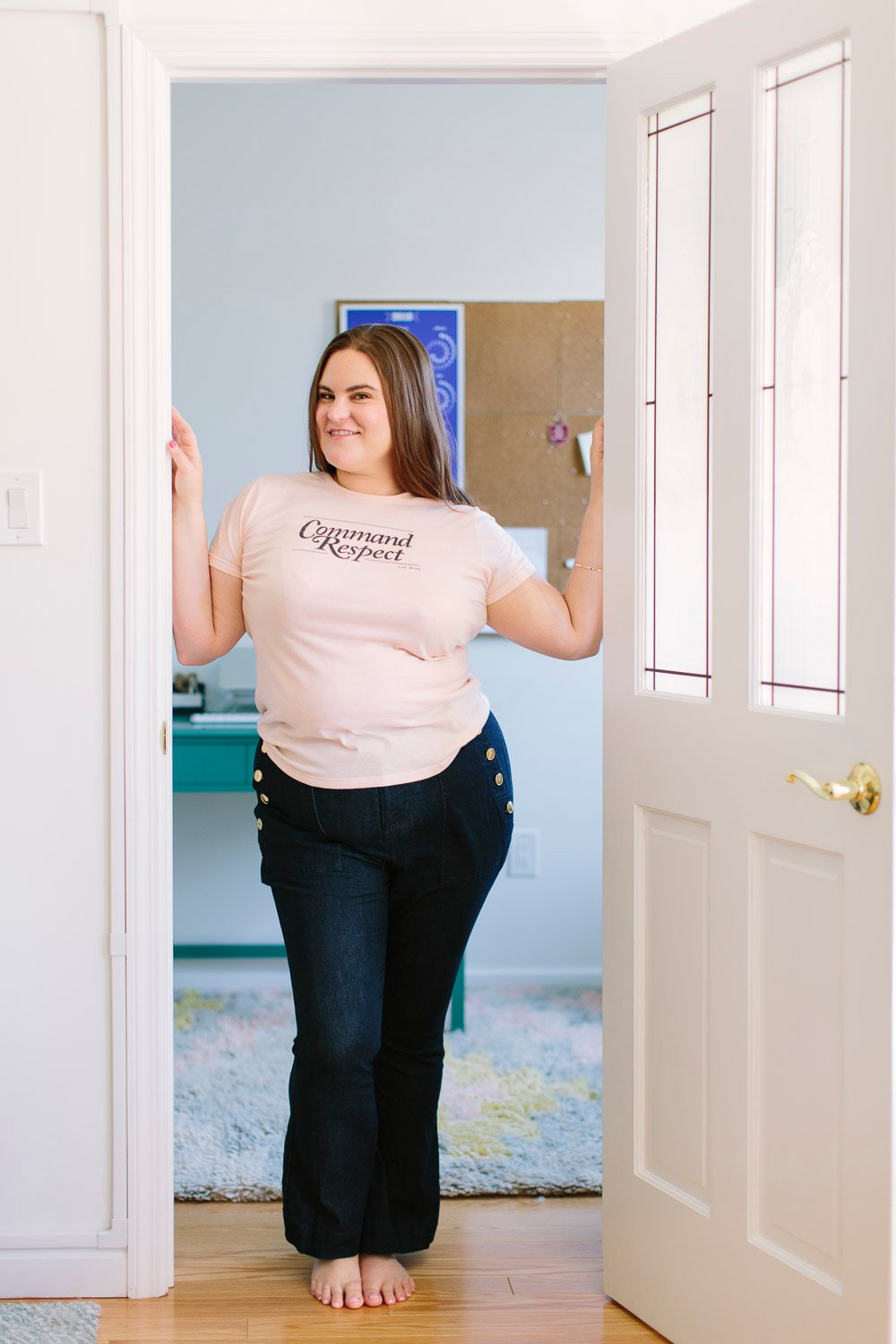 This T-shirt is from The Wing, the women-only co-working space. When I was working exclusively from home, my only social interaction was going to the gym or grocery store at the end of the day. But the Wing has a truly engaged community. Also, I’m wearing a bracelet that I had engraved to say, ‘Do it anyway.’ I have no problem embracing the hokeyness of that! That phrase had come up in therapy a few years ago — I’m a big second guesser and deal with OCD, which has made it challenging to move forward in life and take big steps. So, that attitude has gotten me, through — to feel the fear and do it anyway. For a lot of us, that fear is never going away, you just have to bring it with you everywhere you go.” 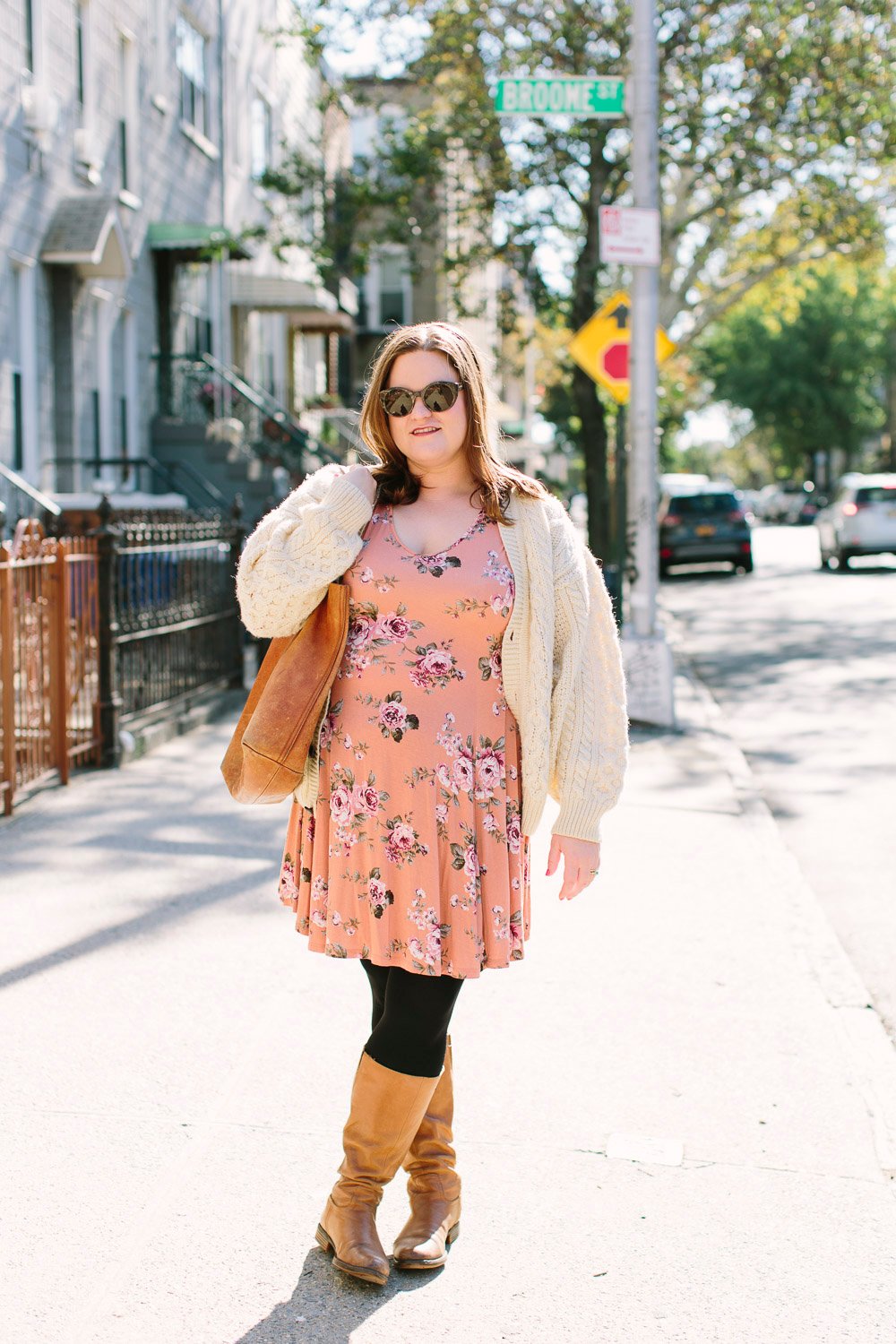 “This dress makes me feel like Lisa Loeb or a Lisa Loeb fan. The boots are so old that I almost throw them out every single year; but they zip over my calves and when you’re a large calved girl, this is rare. Plus, old can be good. The more beat up and crappy this tote gets, the more people ask about it. I don’t do shapewear, like Spanx, but I wear these great shorts from Thigh Society. They prevent thigh chafe and lines. I even wore them under my wedding dress.” 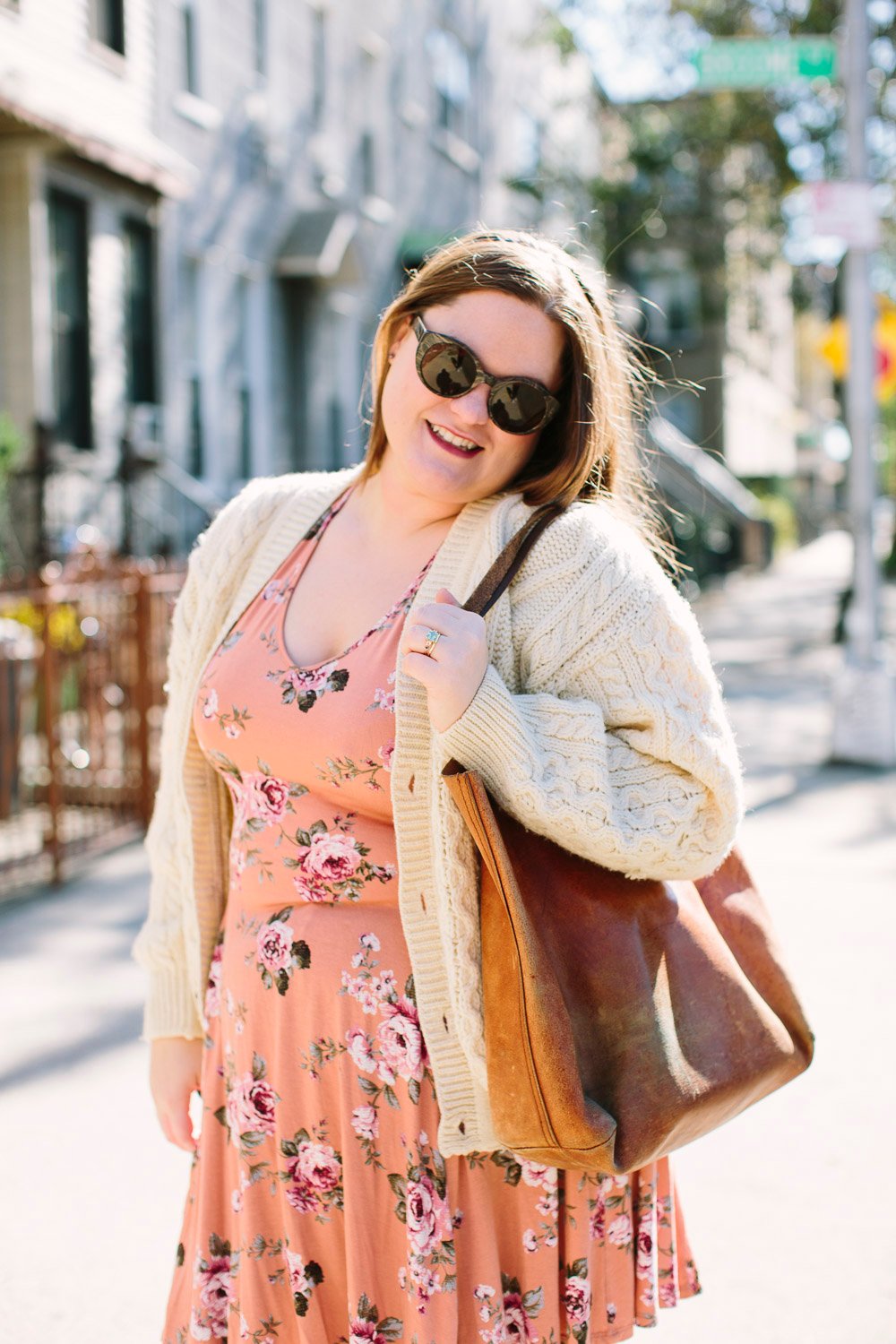 “My husband is a great go-to, if I need a second opinion. He’s a modern fancy gentlemen. This is a man who doesn’t travel with fewer than five pocket squares. One of his style icons is Menswear Dog. He would like to look like Menswear Dog all the time.” 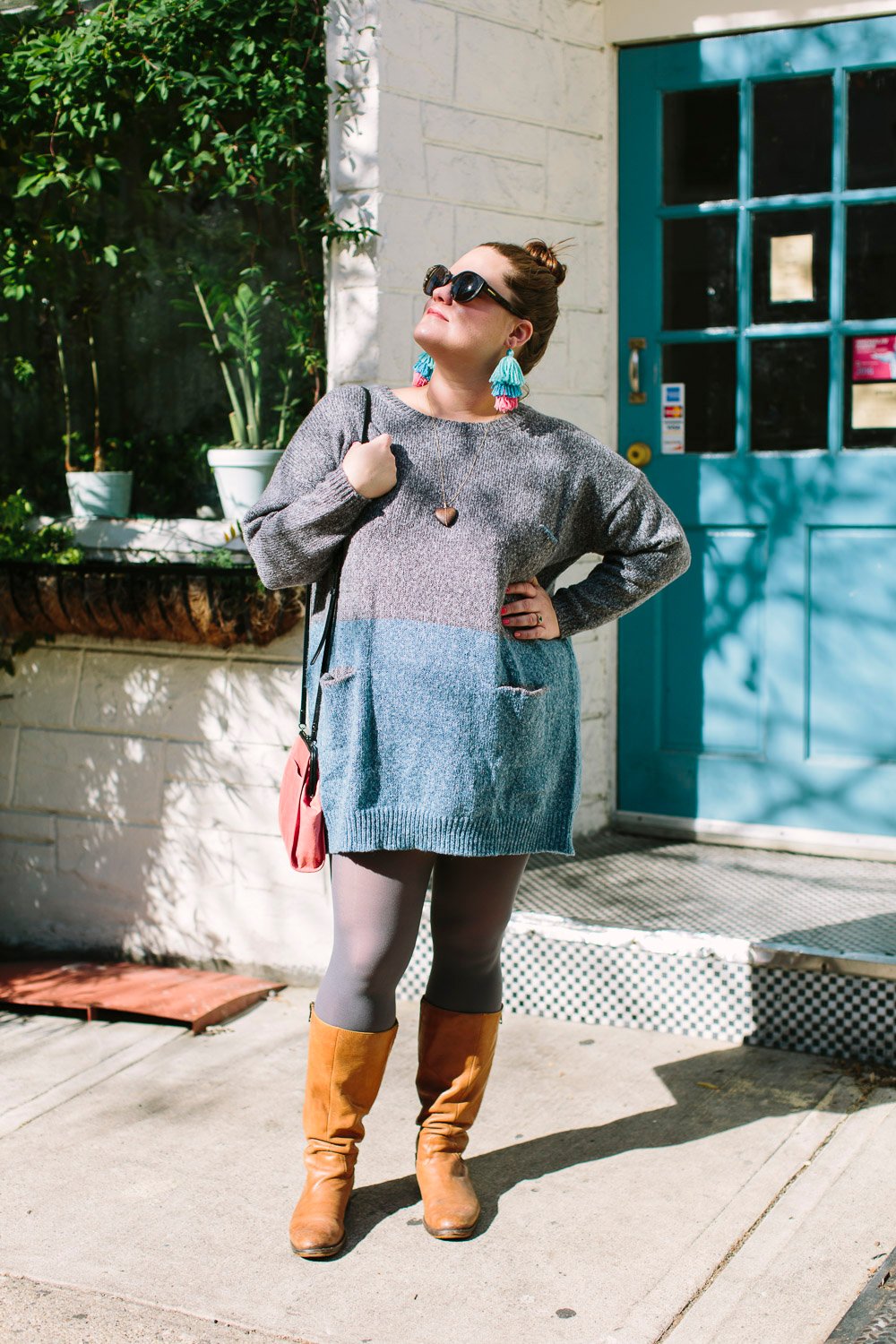 “I never want to chose clothing based on hiding my body. When I first learned the phrase ‘visible belly line’ from Gabi Fresh on Instagram, I decided to pull together a shoot at Refinery29. We chose clothes that highlighted my belly line and then walked around downtown Manhattan. I freaked out for the first few minutes, but there’s only so long your brain will panic before it’s like, ok, well, I’m tired of that. I did the same thing when I wore a bikini for the first time; and when I wore clothes that showed my back. If you have the opportunity to wear something that scares you, take it. You’ll at least come out with the realization that you don’t need to be afraid of getting dressed. There’s nothing that you’re not allowed to wear, really and truly.”

Thank you so much, Kelsey!

P.S. More women share their outfits, including a scientist and two awesome podcasters.

(Photos by Christine Han for Cup of Jo. Interview by Joanna Goddard.)

Work-to-grandfather outfit! We have a girl with great style and great sense of humor!

How refreshing to see this blog. It gives me hope☺

The ombre nails!!!!! Why has no one thought of that before? It’s so stylish.

Freakin love. Thanks for sharing.

So lovely-such comfort, optimism and beauty!

Love Kelsey’s style, particularly her use of colours! She looks put-together without being matchy-matchy!

Thank you so much for having someone with ocd, who is also a happy, succesful, awesome person. And the fact that they struggle to also find boots that fit… well it all felt like a love letter just to me!

Cool woman, great outfits especially the first one, love those colors together. I work in a shop and help women select clothing, it can be devastating what some say about themselves, truly heartbreaking. We need stories and photos that show us that there is something inherently beautiful about us that no one can take a way. Clothing is a way to accentuate and celebrate our unique expression of that inherent beauty.

That ombre nail idea is GENIUS!

Yay loved this one. Totally noticing the increase in body inclusivity on Cup of Jo and I am so here for it!

I thought the same! Love it :)

Yes, same! I have been reading Cup of Jo for… well, I lost count, perhaps a decade? Can that be right?! And the whole time there has been a part of me who felt apart from the content and the community. It’s the way that I feel apart from many feminine-focused things because society tells me that as a fat woman, I am not supposed to fully be out in the world until I become an “after” picture. Those old lies used as a net to hold women down have been breaking open lately and Cup of Jo is one of the places that’s opening up to me as a result. Thank you, Joanna and team, for working to be inclusive of folks of different races, sexual orientations, sizes, gender identities, and ages. THANK YOU for letting me feel like I belong here. It doesn’t go unnoticed and it’s more consequential than you can imagine.

I love her! I want her to be my BFF! (Well, second BFF because my BFF really is the cats pajamas!) And the visible belly link kinda rocked my world. I’d never really considered living in a peaceful coexistence with my belly, but damn if she doesn’t make a beautiful argument to give it a try!

I Love this! Thank you! Just what I needed!

I love the diversity of this series – and I mean that in so many ways, like how Kelsey includes a t-shirt and jeans look. But my favorite is the top outfit. I may buy the dress. ( :

“He’s a modern fancy gentleman.” Yes! This simultaneously made my heart melt and want to say – get it, girl!!

This was so good. Love all of it and her personality!

Intuitive eating is the freest I have ever felt with feeling that life is for ME!! I can feel that same joy and energy from Kelsey. What richness. If Cup of Jo or any other readers want more resources I can heartily recommend Rachel Cole who does lovely deep feminist healing work on body and freedom and eating with pleasure and savoring life. thank you so much Joanna and cup of jo team, this post is one of my most favorites you’ve done. You guys are living out what you value and helping us do the same <3.

I love the peach dress and boots-looks…super cute.

Ok, now that I see this gorgeous girl I am going to get out my pencil skirts and tight dresses and not fret over bikinis any more. I am petite and thin, but have always had a little bit of a belly. I would really like a flatter belly, but until that happens I have seen that a little bit should be no big deal. Now, if only I could have (or fake!) that confidence….

I don’t mean to be patronizing so I hope this advice doesn’t sound this way, Rosabella, but I want to encourage you to look at pictures of women who are the shape that you are now, instead of the shape that you want to be, and see if perhaps you can find kindness in yourself for them (and by extension, yourself). It’s a wonderful feeling to find that you don’t need to think of yourself as a before picture and accept the shape your body wants — which is to say, needs — to be when you eat intuitively and only move in the ways that feel good to you, not as punishment. You’re valuable no matter how flat your tummy is!

Shout out to Katie Sturino (@the12ishstyle) who designed that coat!!!! I LOVE her body positivity and she’s definitely worth an Instagram follow. All my favorite internet things in one place today! What a dream :)

my two favorite looks were the sweater dress and the ‘command respect’ photo. you look Amazing in those jeans, particularly because of the hip detail! i’d have thought it wouldn’t work, but it totally enhances your figure in the best way. even though i was born with a stick figure (and chastised for it all my life), i really love the way curves are finally being embraced – thank your work in this area! it applies to all figure types, imo.

I gave my husband a wallet for Christmas a few years back with ‘do it anyway’ engraved in the leather. There is a beautiful poem that Mother Theresa wrote with the same title. I just reread and it brought tears to the eyes of this freshly post partum mama. Love your style Kelsey!

She looks so cool! This post actually had clothes that I would normally wear but more put together and fun. Cute stuff!

stunning! Your confidence is enviable and your laid back comfy yet pulled together style is fantastic!!

Love the last outfit the most – beautiful colours! And those earrings!