A Friendly Loft in Los Angeles 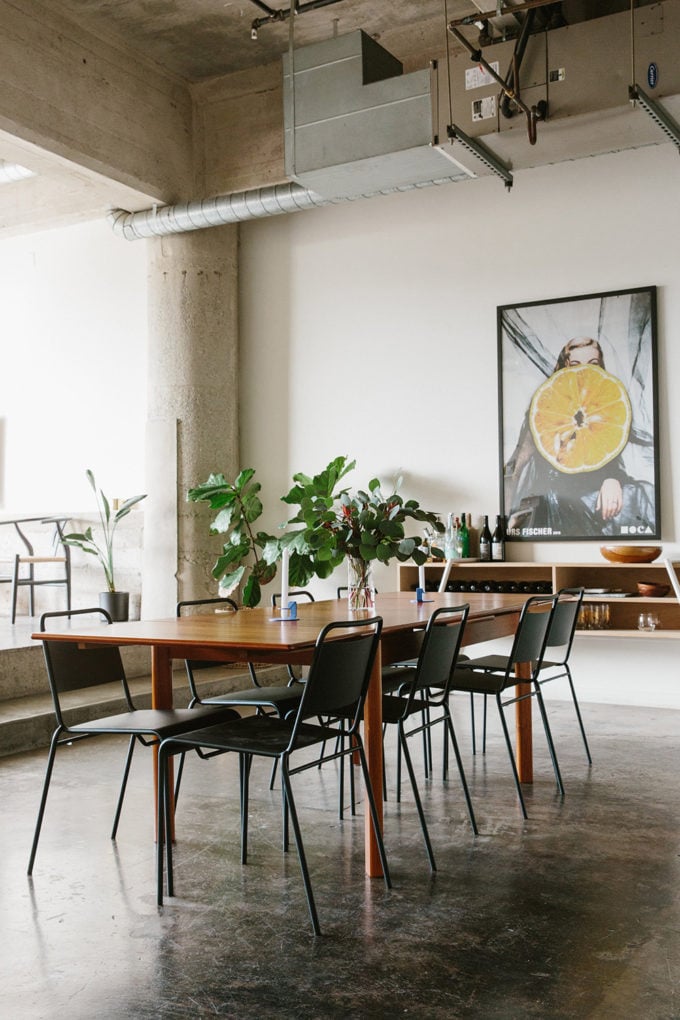 Winemaker Rachel Silkowski lives with her fiancé Michel, a creative director, in Los Angeles. (By the way, if you ever buy wine for the label, you’ll love hers.) Their apartment has concrete floors and a completely open floor plan, which at first felt overwhelming. “We were like, how do you decorate without walls?” she says. But they figured it out, and now the space feels welcoming with cool art and her grandfather’s records. Take a peek inside… 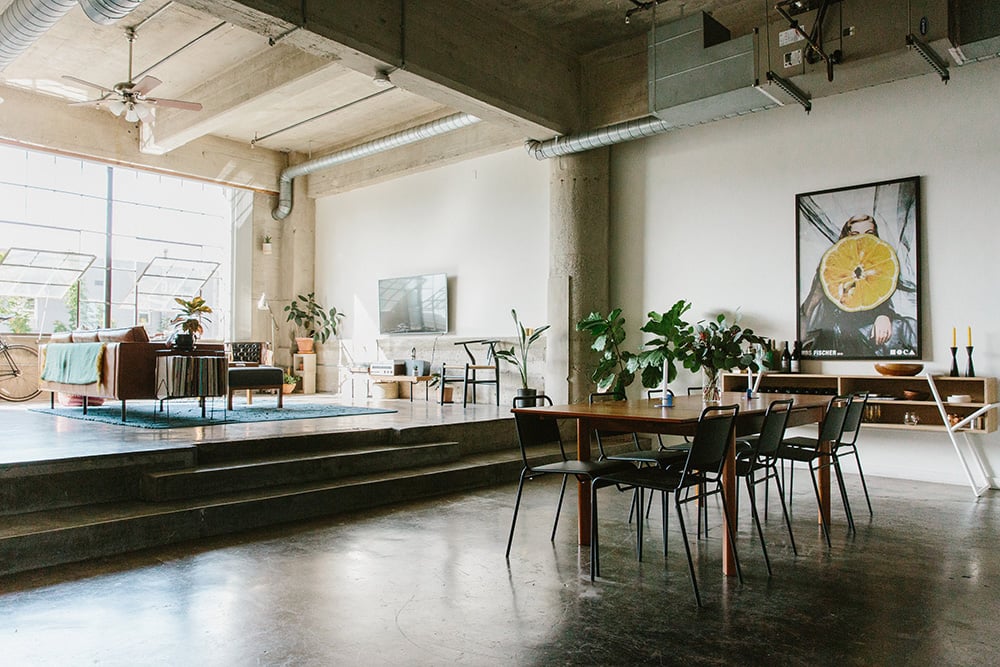 On living in an old liquor warehouse: This is the first loft we’ve lived in, and we love the industrial ceiling. We’ll look up and find shapes, like you do with clouds. That kind of looks like a dog! There are great details because it’s wood-pressed concrete, so it actually has the patterns of wood. Also, the concrete floors are always cool on a warm day.

A funny challenge of loft living: If my fiancé and I have a disagreement, we’re like, well, I’m going to be sitting right here across the room staring at you! You don’t have a bedroom door you can slam.

On old and new: I try to buy our statement furniture secondhand and then fill in the blanks with CB2 or West Elm. We like the Rose Bowl Flea Market, Long Beach Flea Market and Fairfax Flea Market. We found this vintage table that can seat 10 people, and the sleek chairs are from CB2. The combination of vintage and modern works. 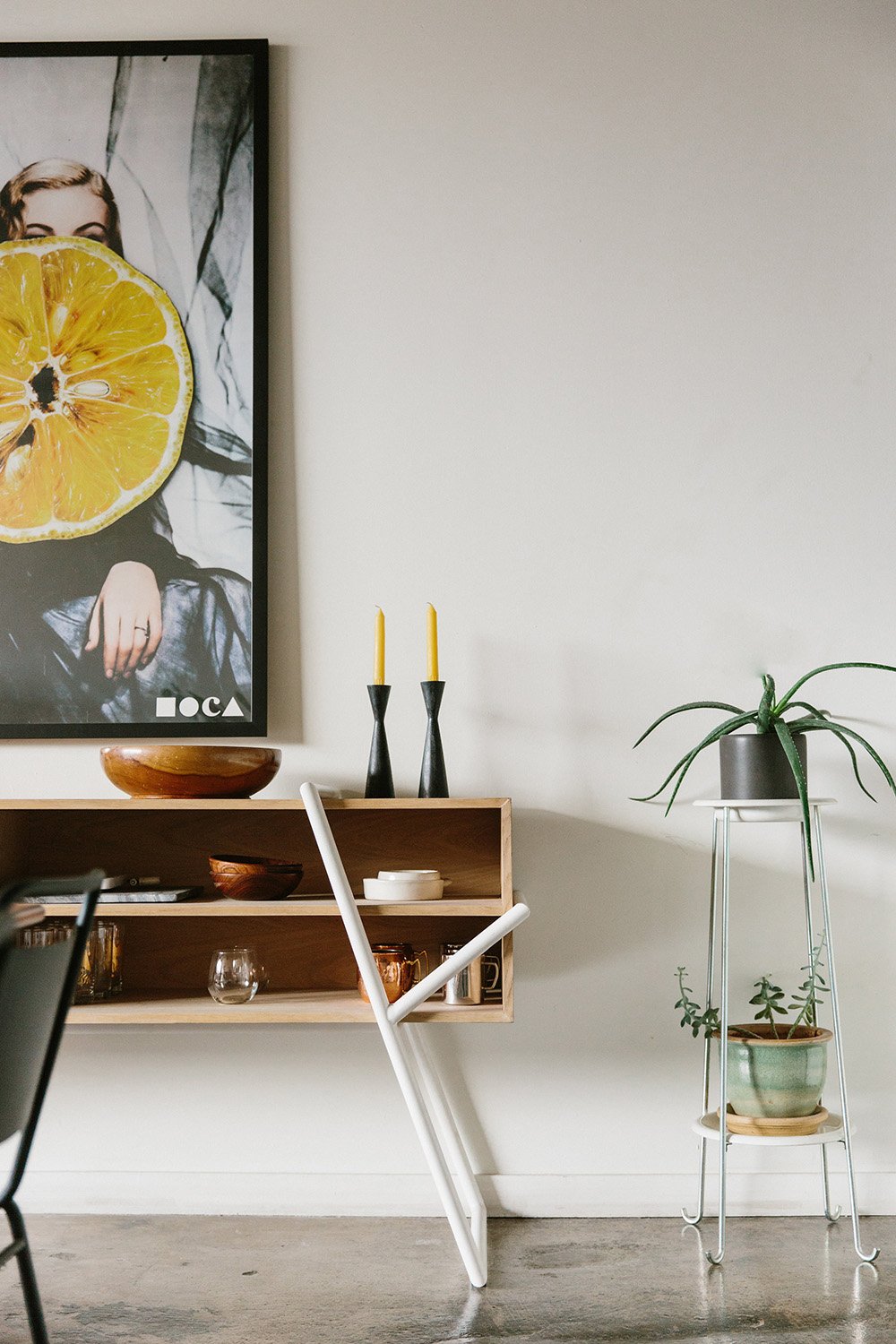 On family heirlooms: My grandfather died last year. He grew up in Orange County back when it was just orange groves — he represented old-school California to me. He had all these 1950s cocktail glasses. He was so cool — I don’t think he realized how cool he was! He had old Frye boots in perfect condition, which I gave to one of my guy friends. Our record player and most of our records were his hand-me-downs.

On everyday moments: We light candles at dinner every night. I grew up that way; it feels intimate and cozy. We also put on old records (John Coltrane, Duke Ellington, Miles Davis, Nat King Cole…) or play Perfume Genius, Rhye or Blood Orange. 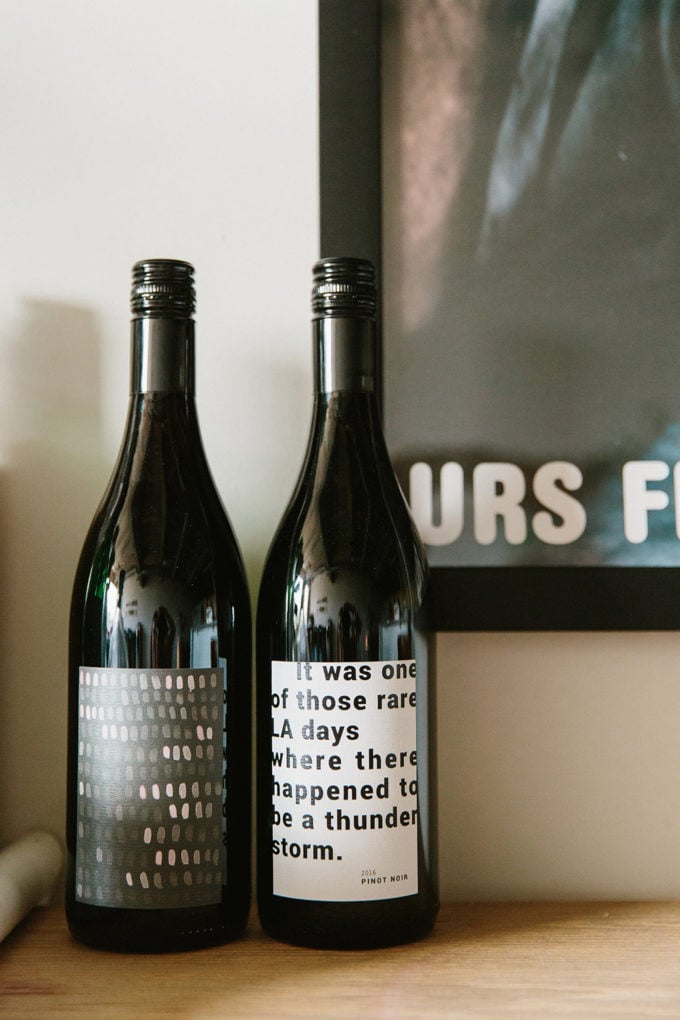 On getting into wine: My dad and stepmom were both accountants who loved wine, so they inspired me to get into it. I studied agriculture at Oregon State and then got a job as an assistant winemaker. The vineyard gave me the freedom to make my own wine as a side project in 2013. I didn’t know what I was doing. I started with one barrel. Then a year ago I quit my day job to focus on growing it. Now I have 14 barrels. It’s still very small. Taking the leap was scary, but working in a winery is exciting, especially for anyone who likes to be outside or work with their hands.

On naming the wine: Michel and I were brainstorming a name for our fourth vintage, so we pulled out all the books around our apartment and read the first sentence of chapter four. But they weren’t working. Hemingway was too poetic, and others seemed too dry. That afternoon, there was a thunderstorm in L.A., and I said, ‘It needs to be something romantic like, It was one of those rare L.A. days where there happened to be a thunderstorm.‘ We turned to each other and were like, that’s it. 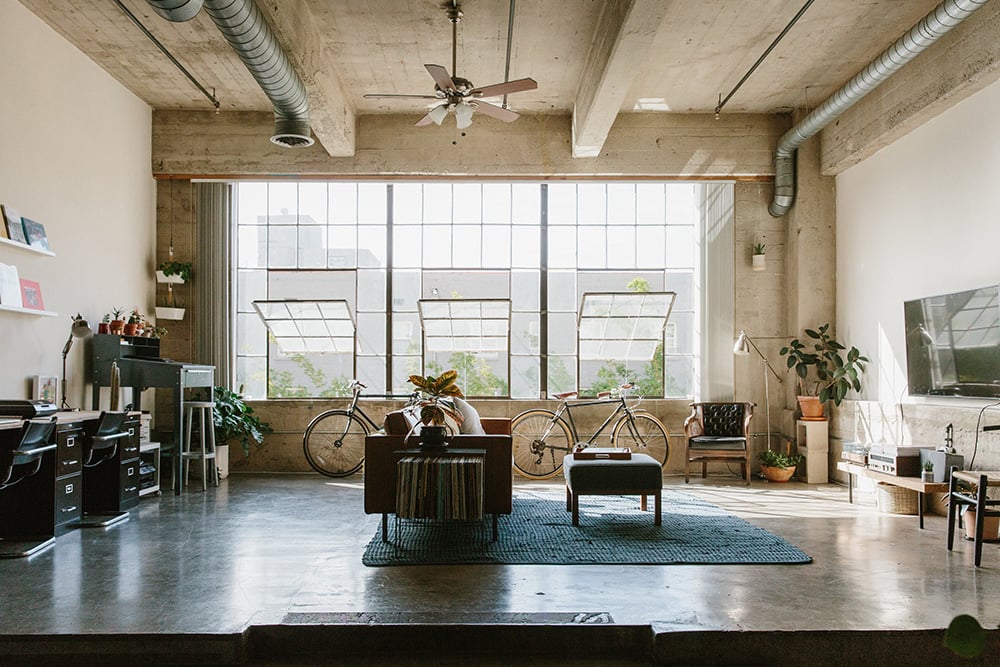 On a party ritual: At first, we didn’t know how to decorate such an open space. So, we decided to use art and rugs to create little nooks. Also, since the living room is elevated by two steps, it breaks the loft into sections without having a wall. Every time we have people over, somehow, by the end of the night, everyone ends up sitting on the steps, like we’re in high school on the bleachers. We’ll sometimes joke around and take a picture. I never expected that! 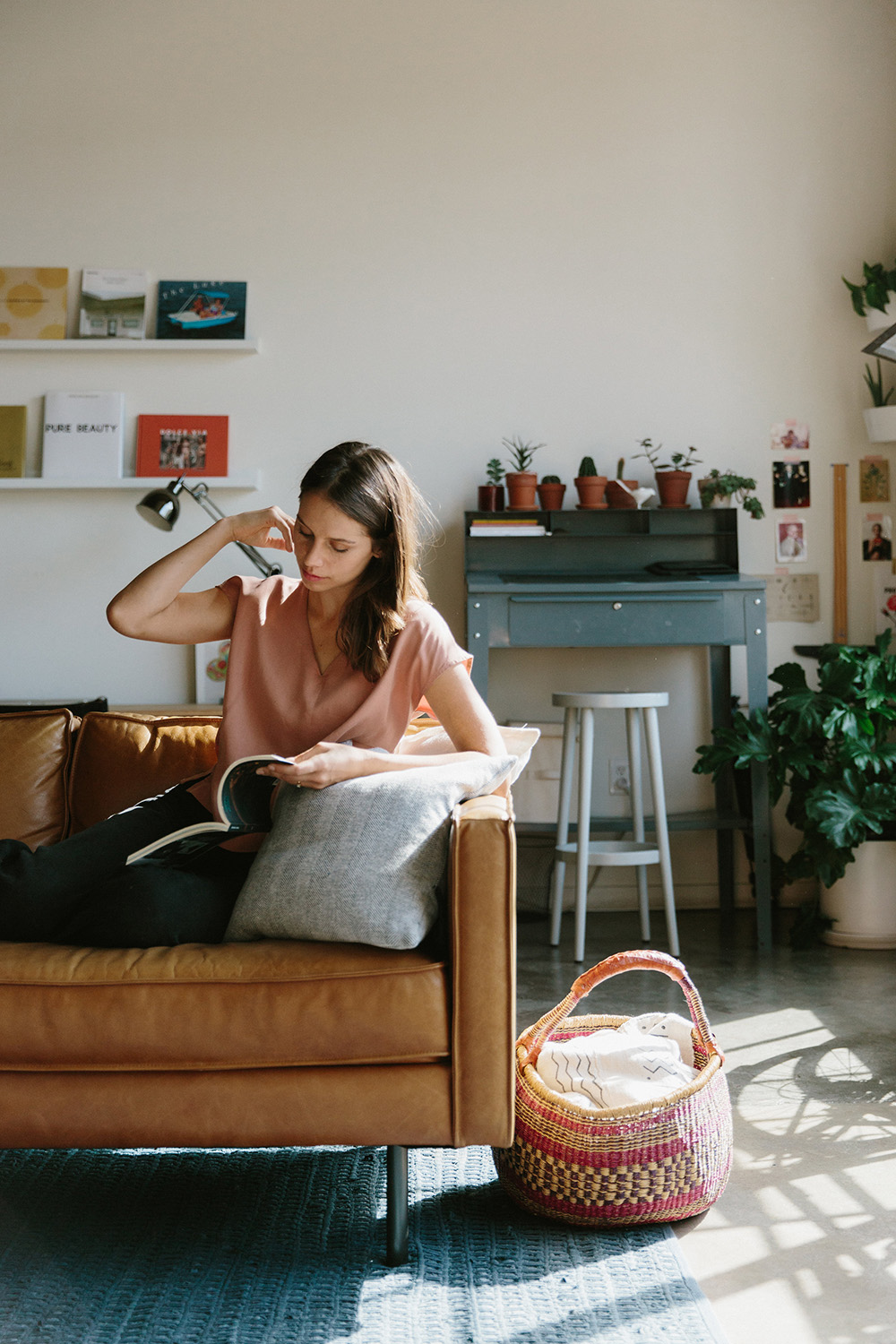 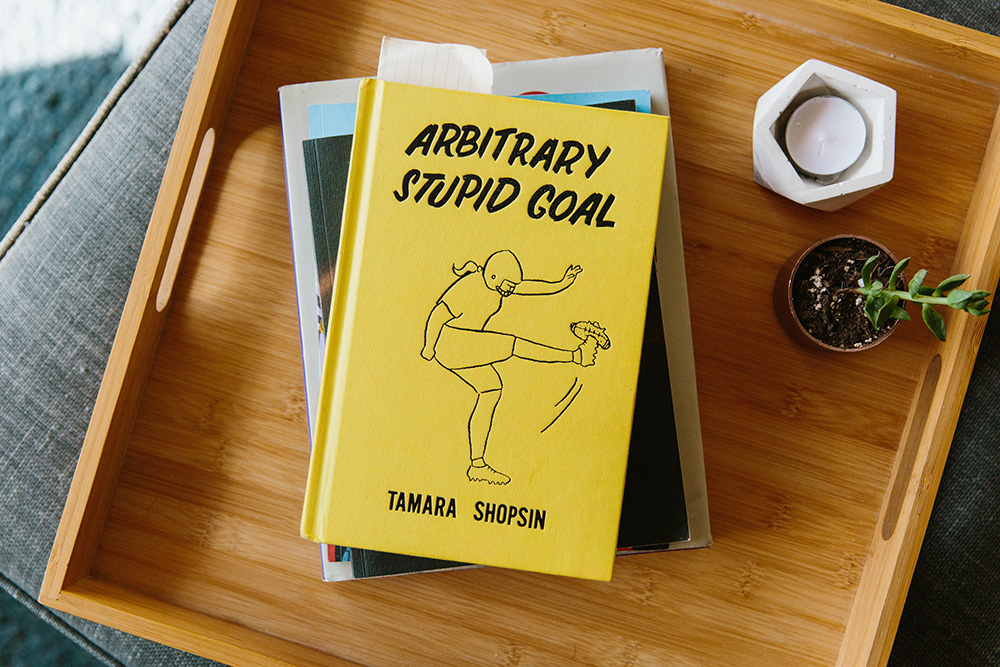 On a third roommate: We got a puppy, Hank, two months ago. He’s a total mutt. We thought he was a wheaten terrier but we did a DNA test, and it came back with every dog you can imagine. He hangs out on the steps, too — he’ll sit on the lower step and rest his head on the upper step. [Ed. note: Sadly Hank wasn’t home for the shoot, but here’s an adorable pic of him!] 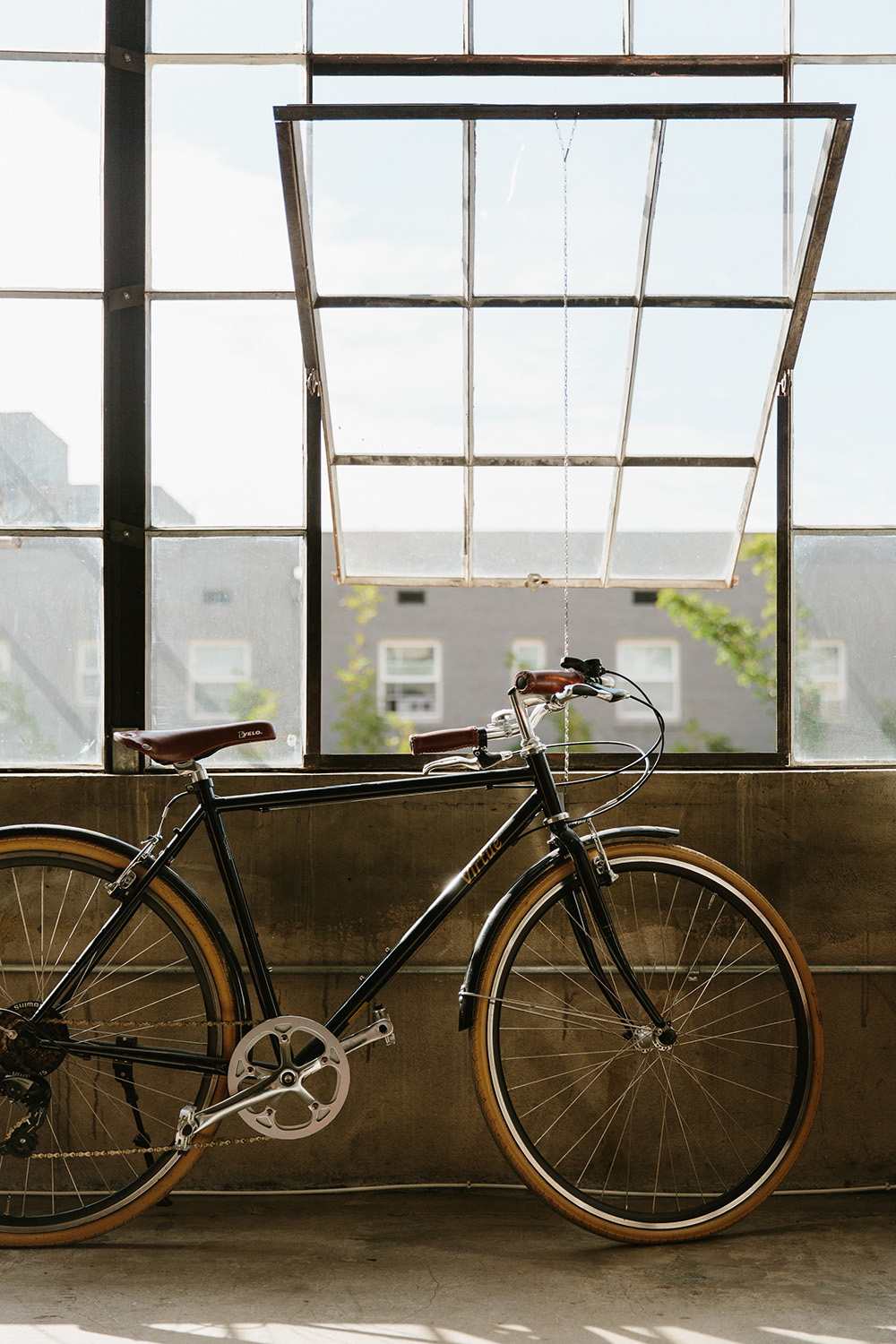 On the joy of wine: I drink lots of red wine and Chardonnay, and I like making cocktails — especially whiskey sours with the egg white and lemon. Friends always text me when they’re at Trader Joe’s, and ask me what they should get for under $20. My tip is that the staff will know the wines inside and out, so you can ask them. My friends don’t ask for help in wine shops and at restaurants, I’ve noticed, but I do all the time. I’ll say, I want to experiment, but I’m only willing to spend $15. They’ll work with you. No one knows everything. 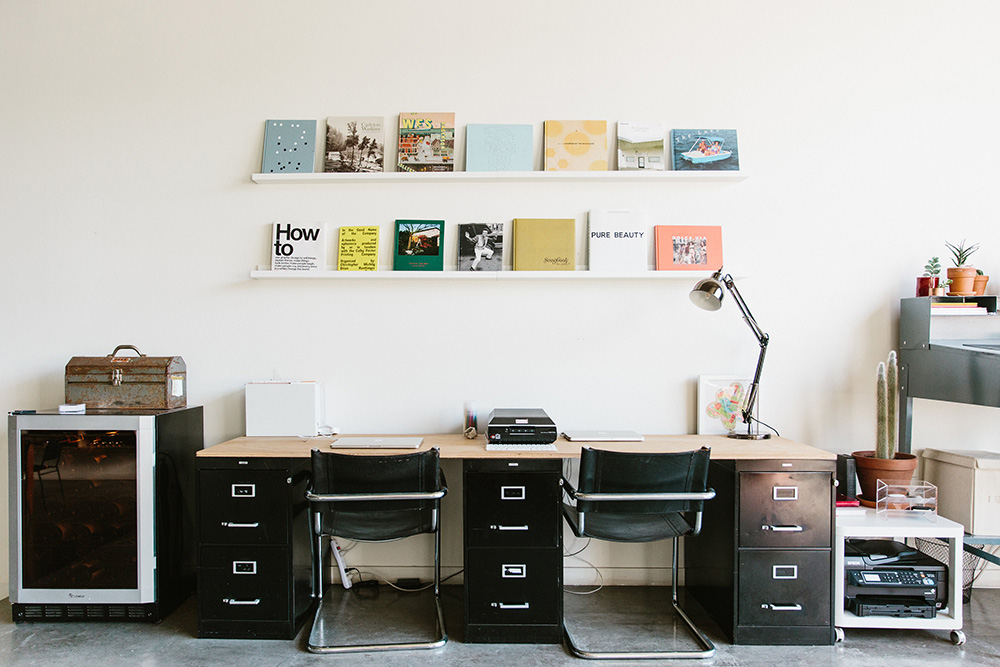 On a pretty home office: I make the wine in Santa Barbara for a few months a year, but otherwise, I work from home. We got three file cabinets on Craigslist and layered wood on top. We display our favorite art and photography books on the shelves as inspiration. 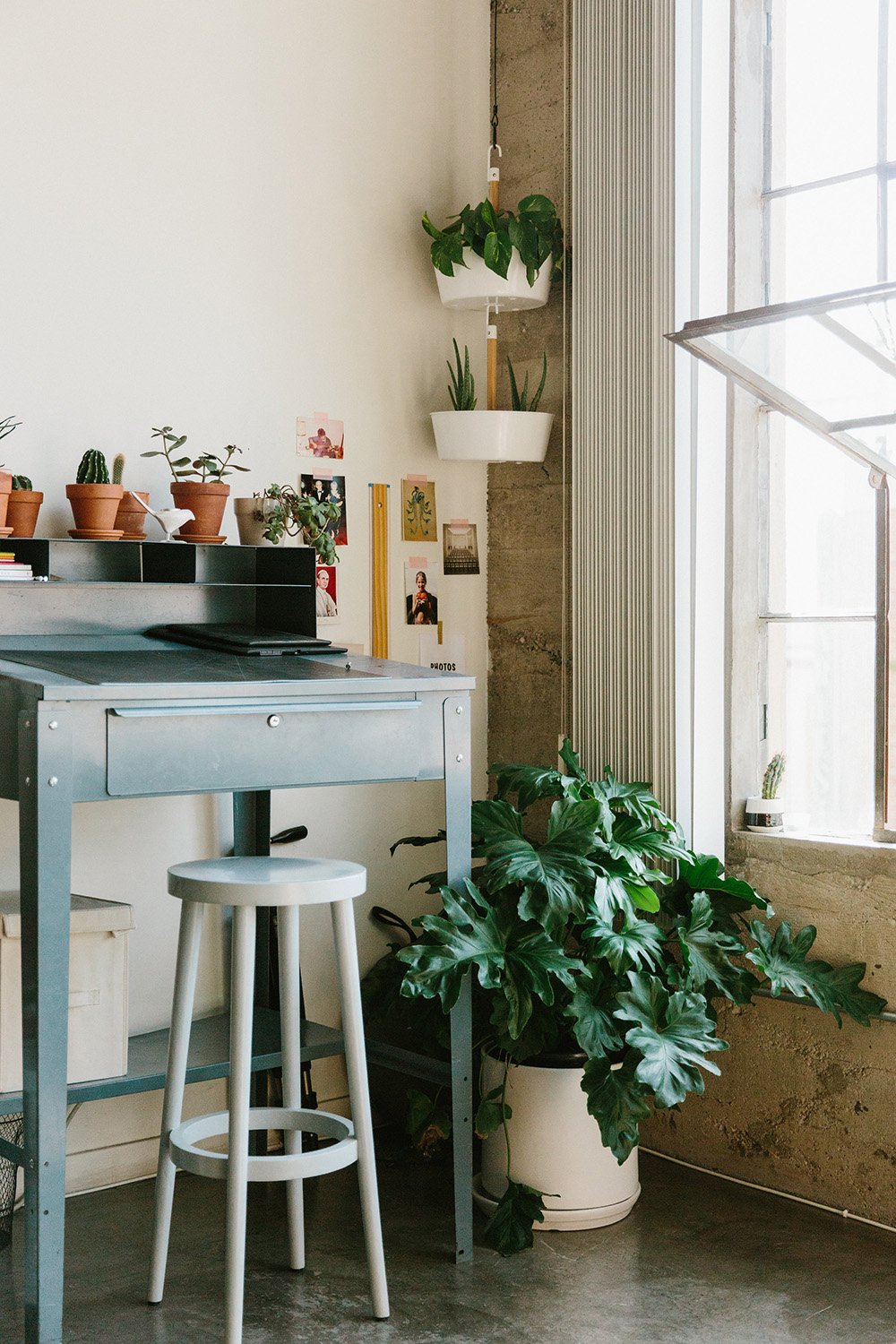 On a standing desk: We found this desk on the side of the road for free! Michel is 6’4″ so he likes standing up. He’s a South Philly Italian and talks with his hands and is an emotional speaker, and when he’s working, he’s constantly moving.

On personal photos: Next to the desk is a little display of sentimental stuff — for example, a photo of Michel’s grandparents, and one of me as a girl holding a tomato I had grown in my backyard. His family is all about tomatoes and calls tomato sauce “gravy,” so he loves that photo. 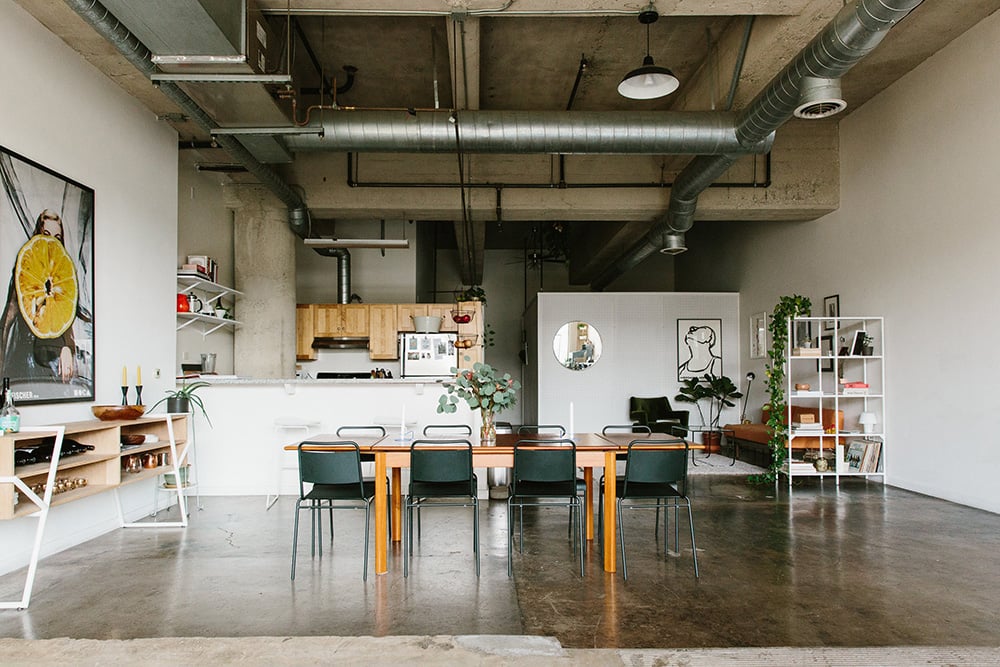 On a proposal at home: My fiancé and I met at a pizza shop four years ago, so pizza has sort of been our thing ever since. Last June, we had just gotten back home from vacation. We ordered our favorite deep dish pizza and opened a bottle of wine. I was getting the plates and napkins while Michel lit the candles and put on music. When I turned around, he was on one knee. I was completely surprised! He had been carrying the ring around for days waiting for the right moment. 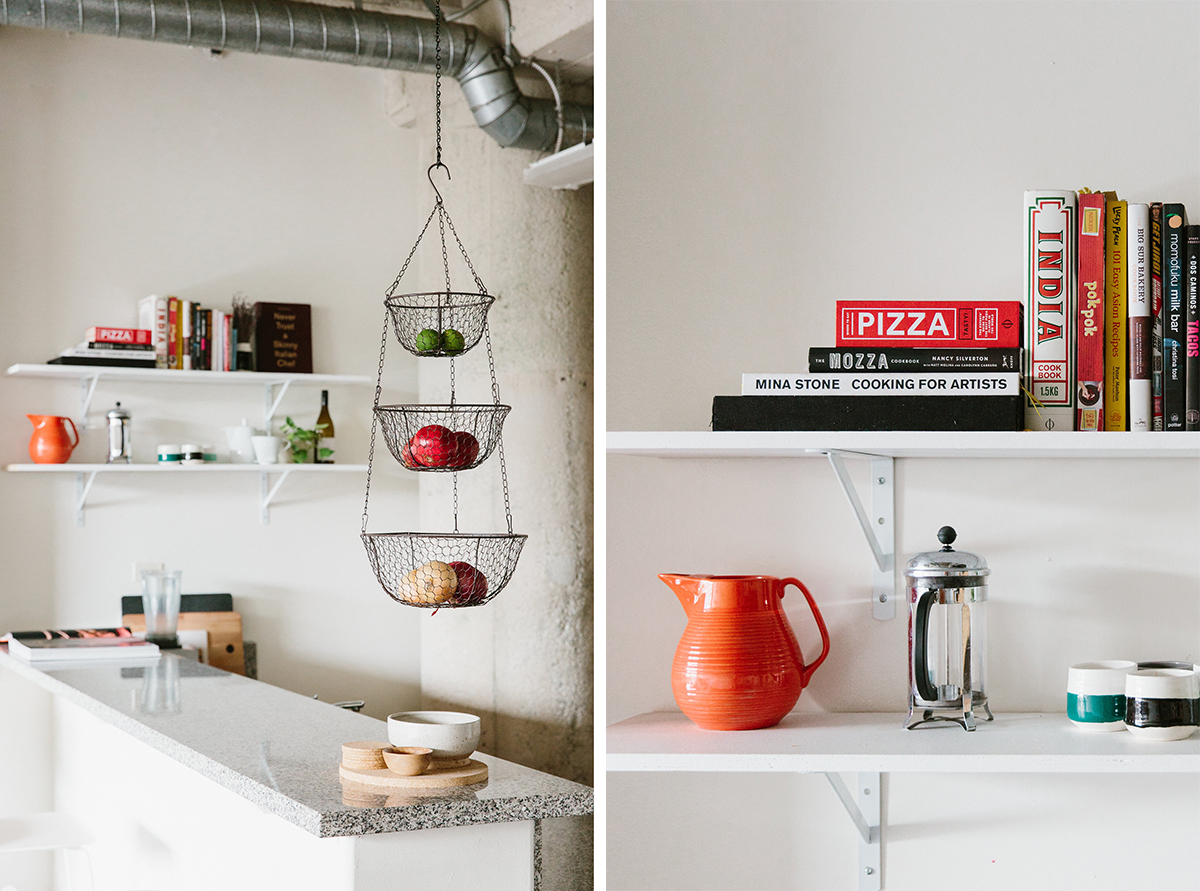 On easy entertaining: When friends come for dinner, I usually serve a bunch of appetizers, instead of a big entree. We might have a veggie dish, a salad, bruschetta and cheese. Also, bacon-wrapped blue-cheese-stuffed dates. They’re the easiest thing, and meat eaters are always impressed. 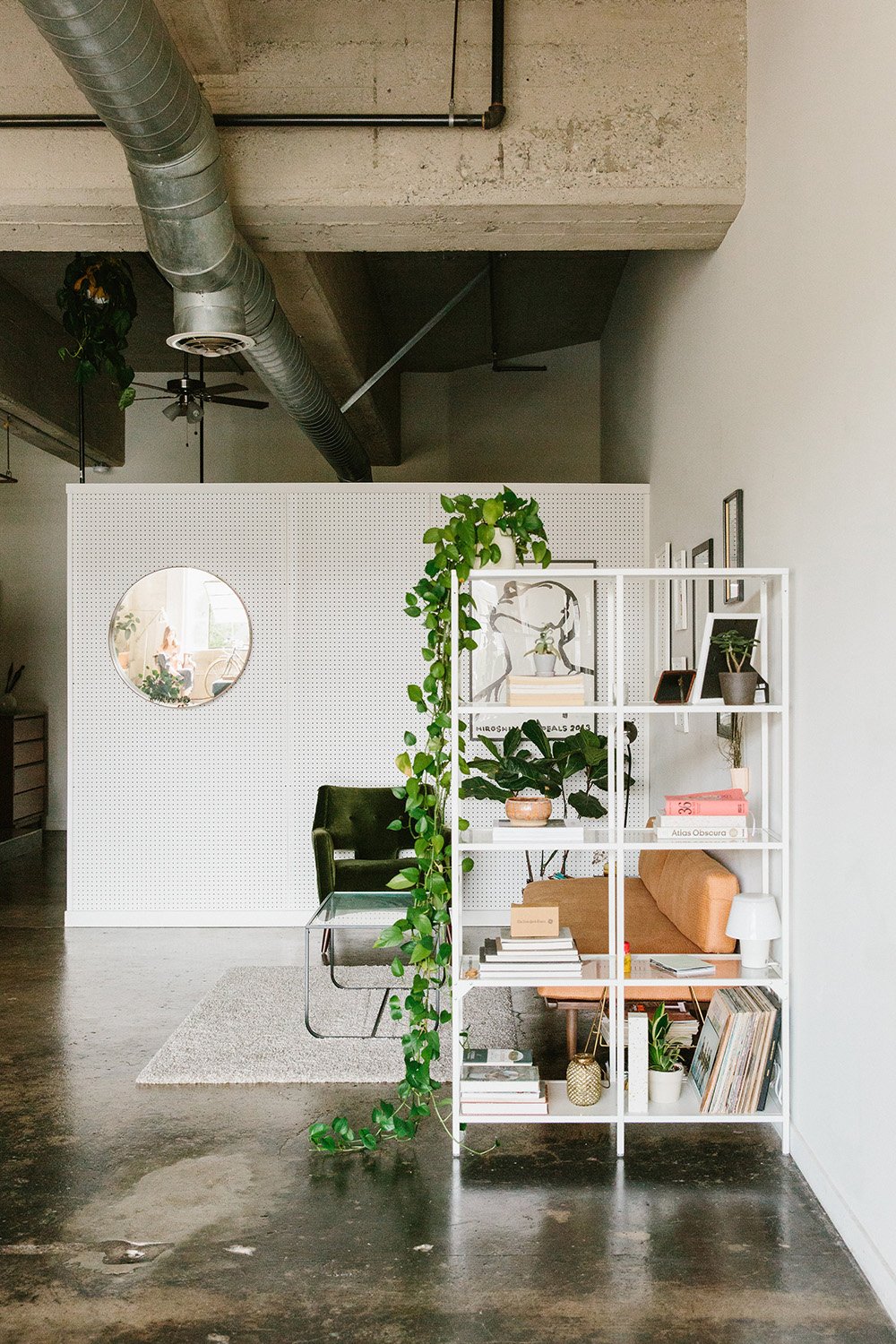 On adding light: The apartment gets direct sunlight from 10 a.m. to sundown. But since the space is so deep, the back half can feel darker. This round mirror gives more light. 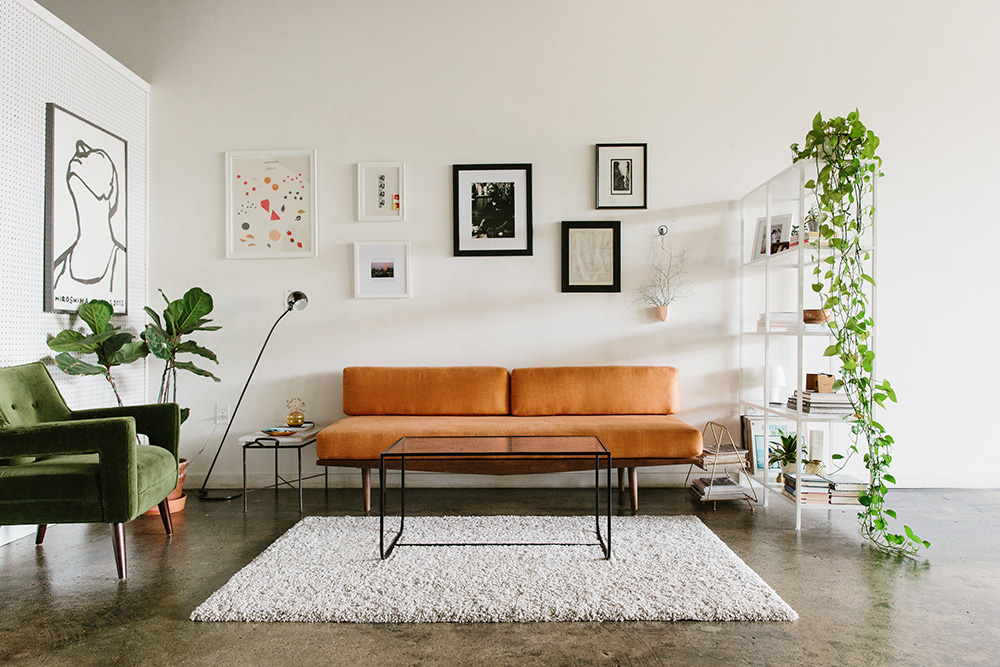 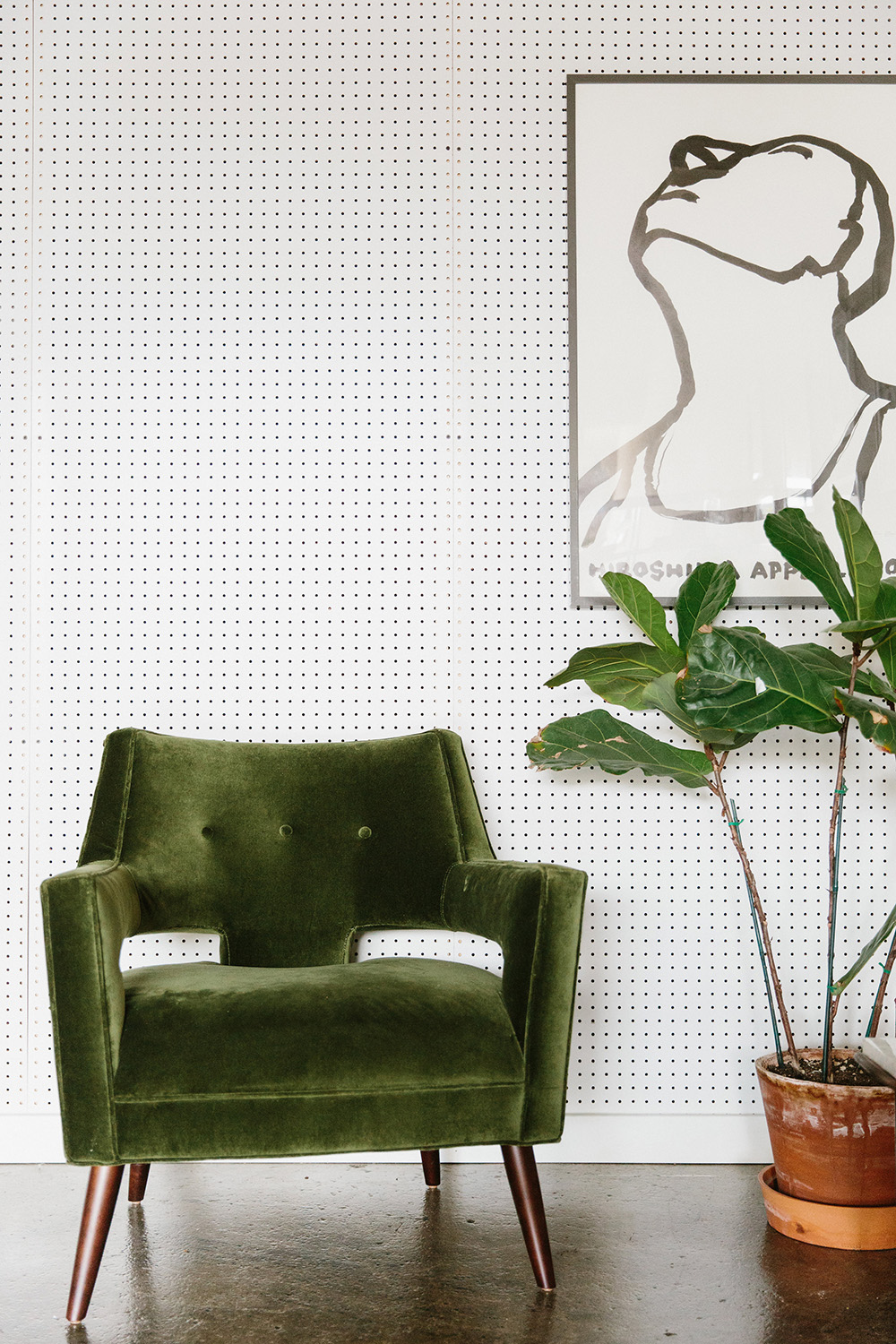 On meaningful art: Michel went to Tokyo for work a few years ago. He visited Hiroshima and talked to families whose parents or grandparents had been there during the bomb. He was deeply affected. This poster was drawn by Kaoru Kasai for the Hiroshima Appeals poster series, where major Japanese graphic designers create artwork to help call for peace in Japan and abroad. Especially right now, it makes you think about everything. I like what it stands for. 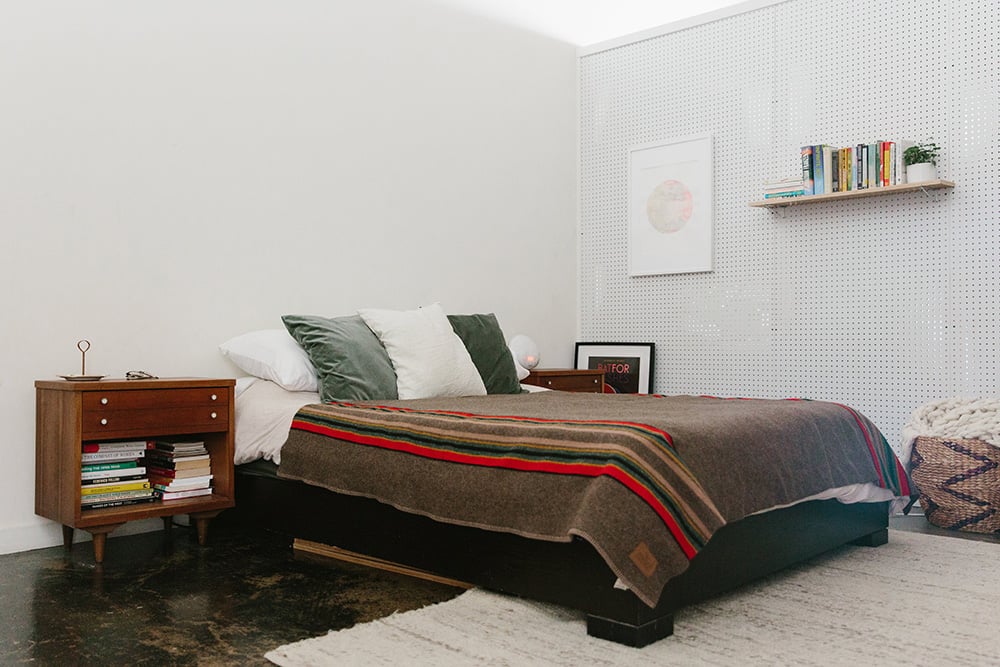 On a DIY bedroom: We wanted a separate place to sleep, so Michel and his dad built this bedroom by hand in a week. We used peg board because you can hang things and move art around. It’s a 10-foot wall and 12-foot wall connected, so that creates the room; there’s an opening to enter, versus a door.

On happy mornings: Since the bedroom doesn’t have windows, we got an alarm clock that rises like the sun! It takes 30 minutes to get to full brightness. You can also set it to play music or NPR that slowly builds in volume. Waking up gently is so much nicer than a harsh alarm.

On layered bedding: We have a Pendleton blanket collection, so I’ll put one on during the colder months. We also have the jersey duvet from Muji; it feels like a soft old T-shirt. I’d prefer no decorative pillows, but the pillows are a Michel thing. I’ll wake up with my head on the mattress, and he’ll have all the pillows under him! It makes me laugh. Now this loft really feels like home.

Thank you so much, Rachel!

(Photos by Nicki Sebastian for Cup of Jo.)