A Treehouse Apartment in Washington D.C. 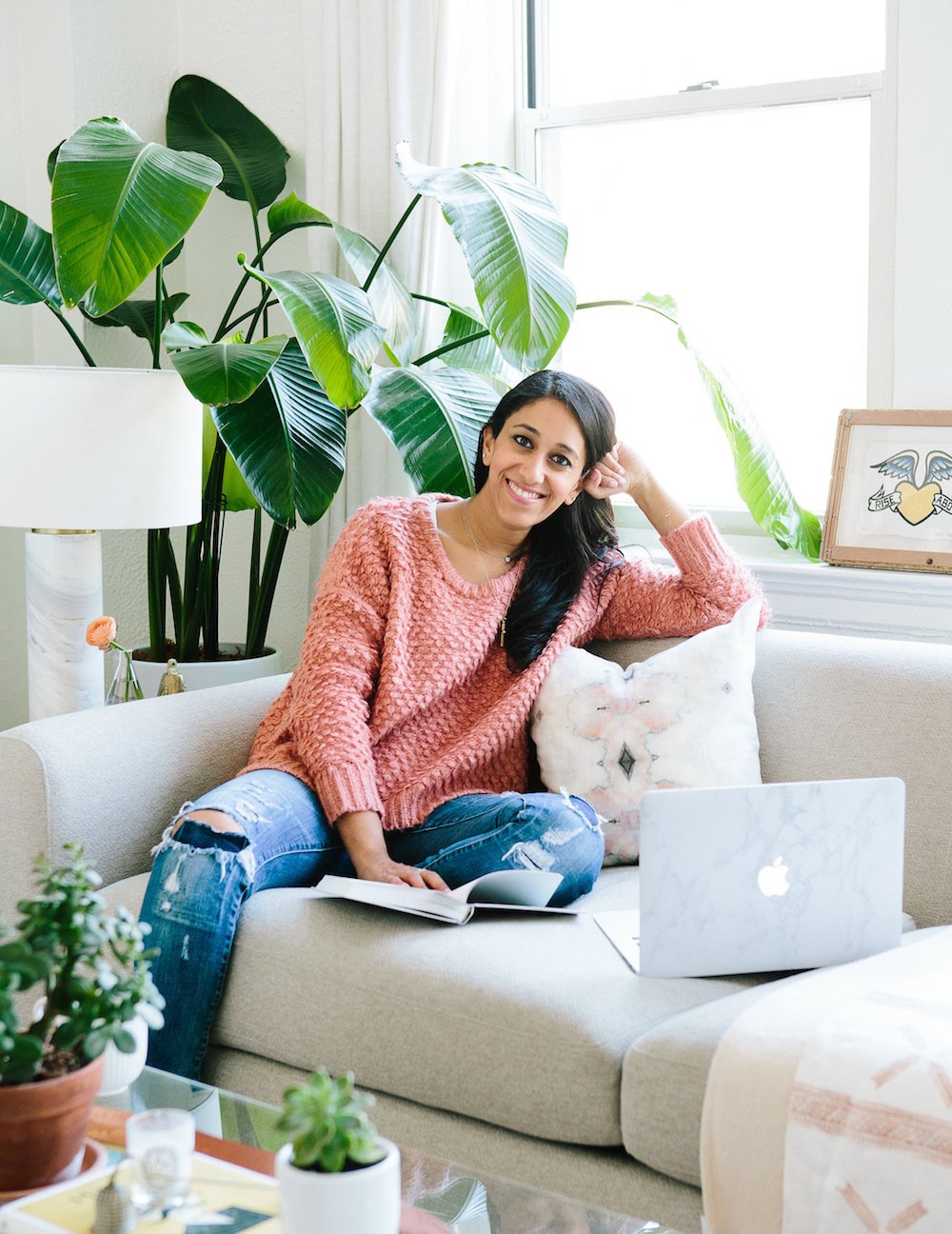 Experience designer and leadership coach Amira El-Gawly‘s apartment is surrounded by trees and full of plants — 35 of them, to be exact. “I attempted to name all of them, but I had to stop because I couldn’t keep track,” she says. Amira has lived in the United States, Egypt and Abu Dhabi, and each place is now a part of her and her house. “I’m from many places, and I want my home to feel like that, too.” Take a look inside… 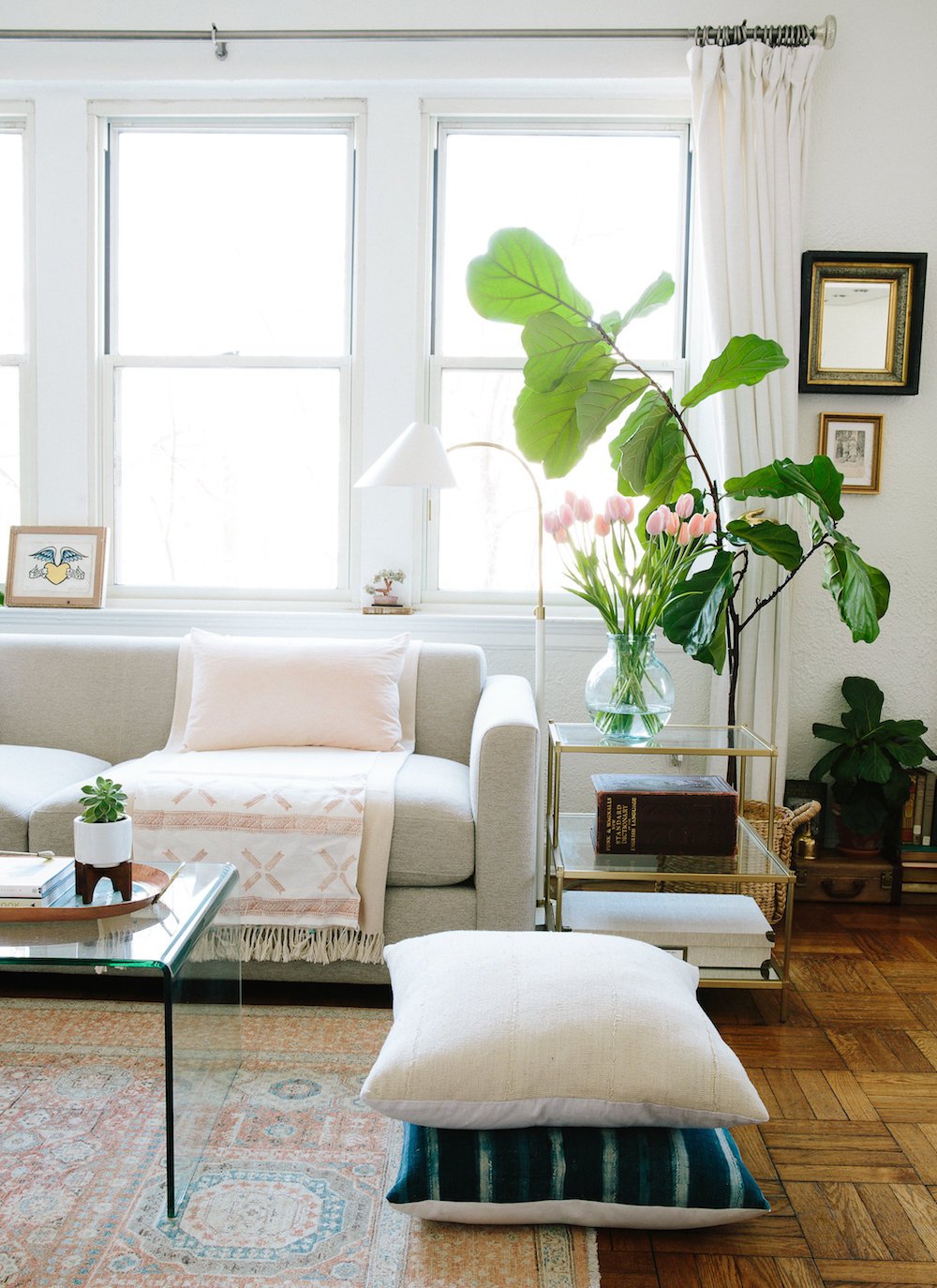 On love at first site: You would’ve been shocked to see what this place looked like when I moved in three years ago! The living room walls were yellow, and the bedroom was a pharmacy blue. It wasn’t attractive, but I fell in love with the space because it had so many windows — it felt like a treehouse.

On small spaces: My 560-square-foot apartment isn’t huge, but I have big furnishings, which somehow makes it feel more spacious. I also like big pillows from independent makers, like Fragments Identity. Too many small things can make a space feel cluttered. 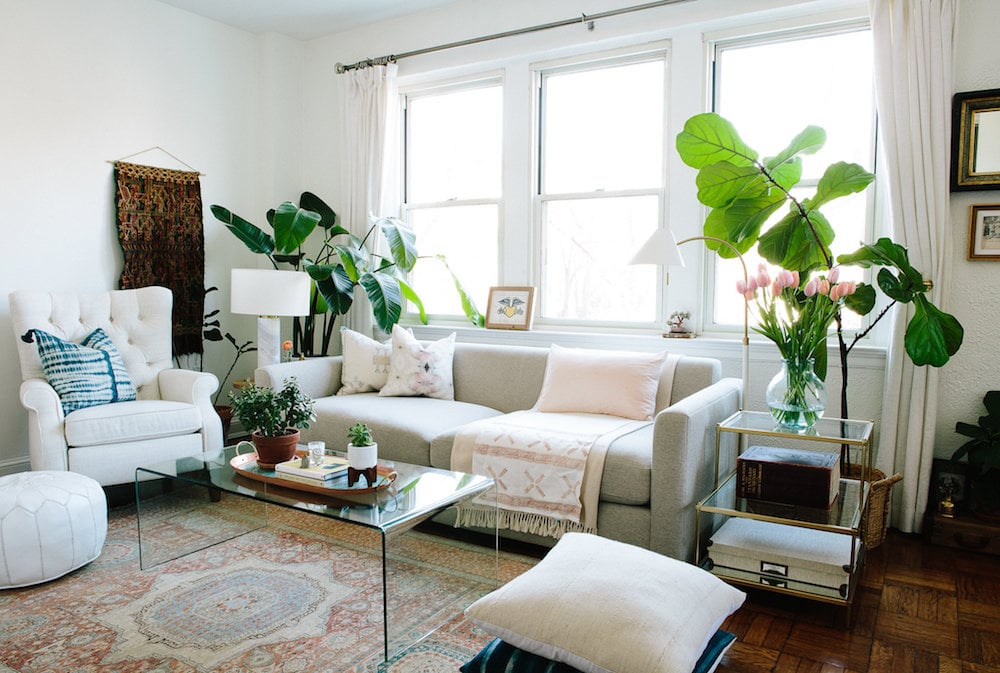 On humanizing plants: When I moved in, the first thing I bought was a fiddle leaf fig tree, and I named her Dolly. So began my love affair with plants. I’d never had plants before — other than the random orchid from Trader Joe’s — but now I have 35. Dolly is still the famous one. When my family calls from Egypt, they always ask about her. I’ve learned that the best thing for plants is consistency. They like to know that they’re going to be watered on the same day every week. If they don’t get fed, they get upset like a human would. My friends make fun of me, but if you treat plants like humans, they’re so much happier. 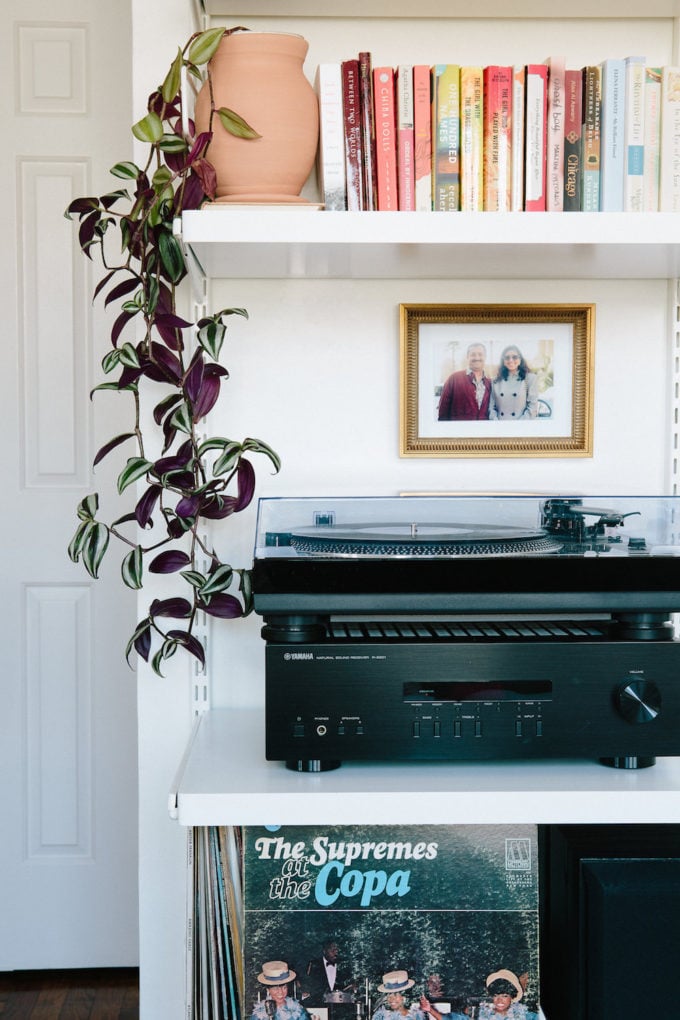 On wind-down rituals: I went to college in Egypt and then moved to D.C. to go to grad school at Georgetown. Within my first three months, my professor asked me to help him start a marketing and experience design agency. So, I spent the next five years working like crazy, going to grad school and building a startup. I didn’t have a life outside of work, so my only chance to take care of the plants was Friday night. I would come home, put a record on and water my plants — I was your typical 27-year-old grandma. 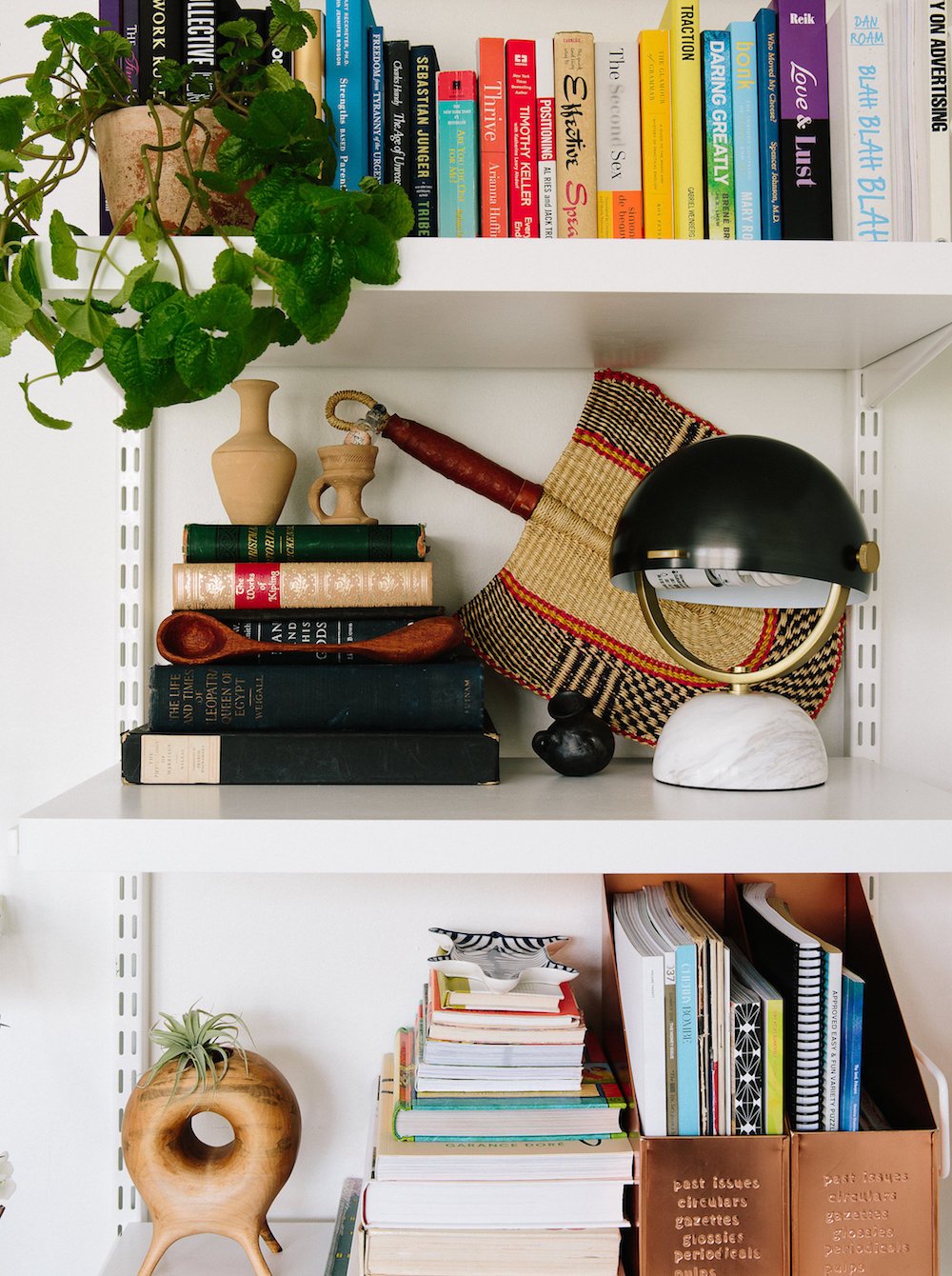 On third-culture kids: I’m Egyptian, but I was born and raised in Abu Dhabi. When I was seven, my mom brought my siblings and me to the States so we could get our citizenship and secure our future, and we spent our time going between Abu Dhabi and Danbury, Connecticut. We then moved back to Abu Dhabi when I was in high school. In contrast to glitzy Dubai, Abu Dhabi feels like a small town, and we were part of a very tight-knit community. There were other Egyptians, Lebanese, Jordanians and Palestinians. I went to British and American schools, so my teachers were French, American, British, German, Slovenian and Spanish. They call people like me ‘third culture kids’ — I’m not really Egyptian, I’m not really Emirati, I am not really American, I am a blend. I feel really lucky to have grown up in a melting pot. 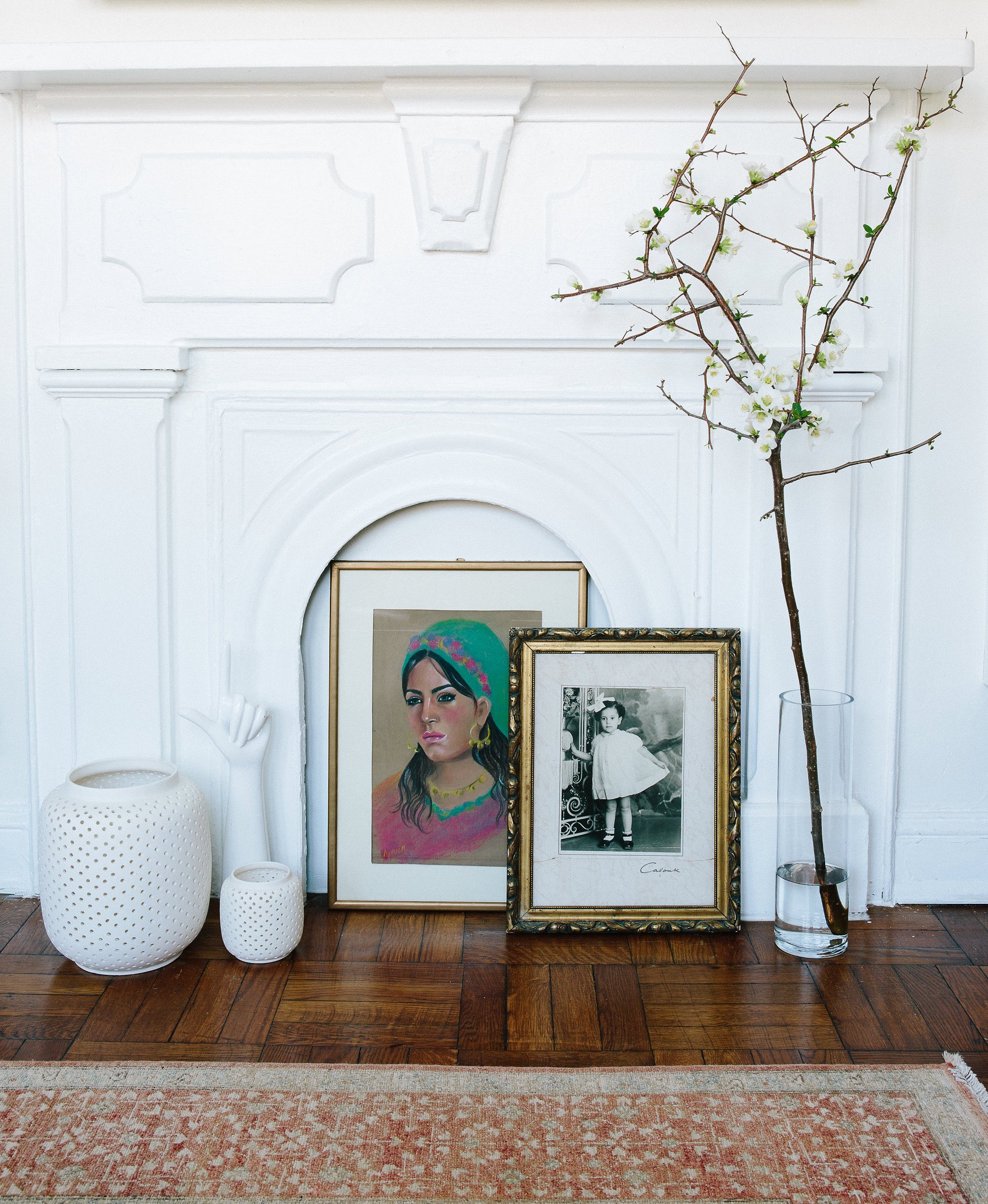 On female portraits: I brought the artwork in the fireplace back from Egypt and Abu Dhabi. One is my mom as a little girl; the other is a painting of an Egyptian woman I found in an antique shop in Cairo, where my grandparents still live. I love her so much, she seems so thoughtful. I always think women are so beautiful. Their expressions say so much about life. 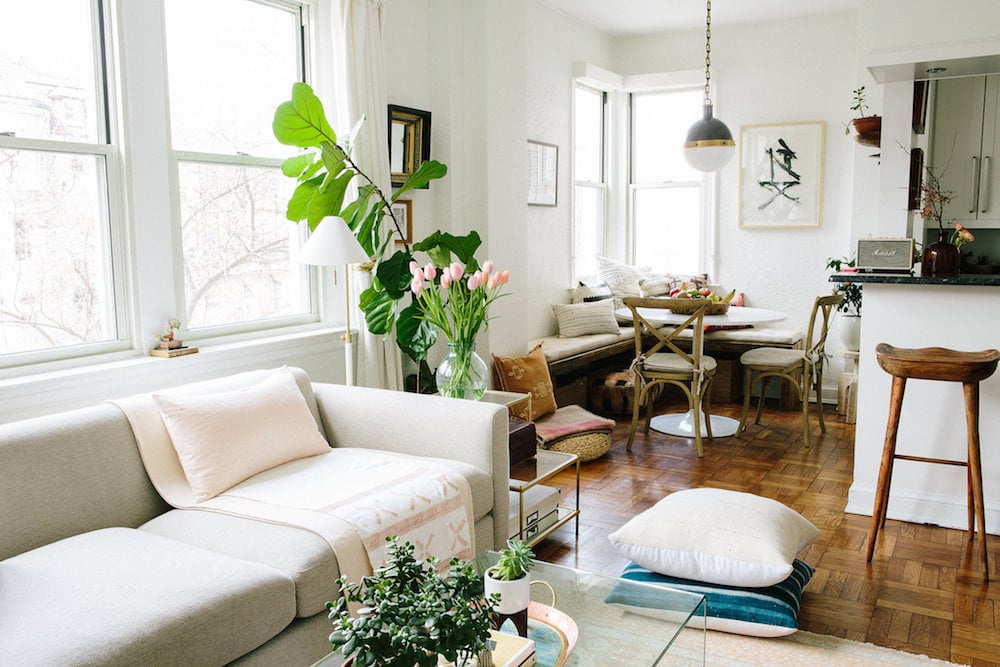 On sabbaticals: Last year, I was so burned out from working around the clock, almost every day for five years straight, I decided to take a three-month sabbatical. I wanted to peel away all my bad habits. When I was working at my old job, I would come home, eat a grilled cheese sandwich on my couch, fall asleep watching TV, wake up at three in the morning and drag myself to bed. The first thing I did on my break was to create a better evening ritual. I’d never a skincare routine before, but now, as soon as I start to feel tired around 9 p.m., I brush my teeth, wash my face and turn off all electronics. 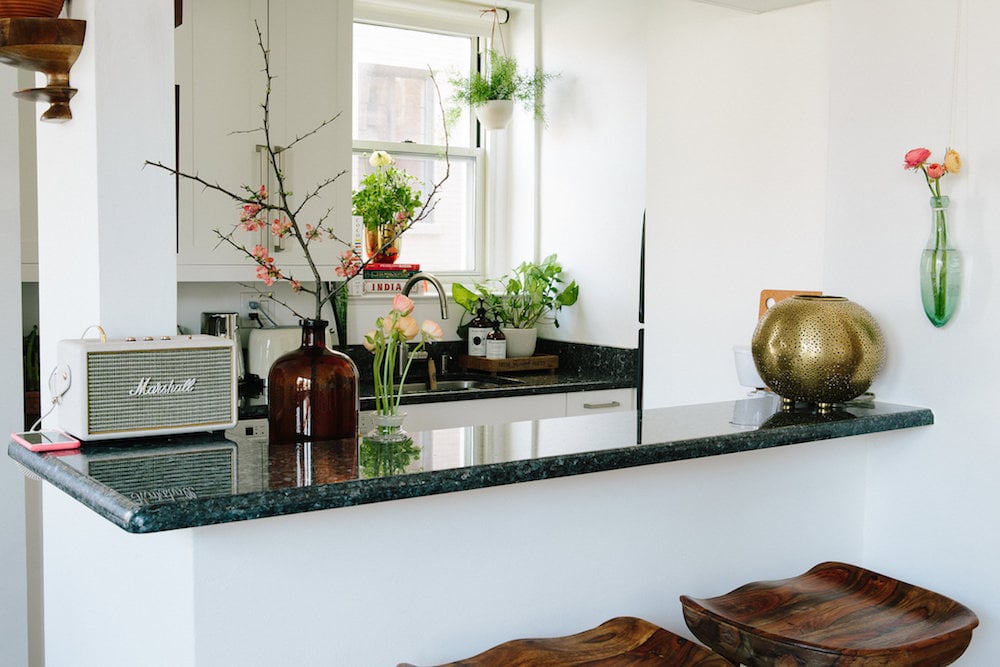 On starting to cook: Two nights ago, I hosted my first ever Sunday supper. It was the first meal I had ever cooked from scratch. I am 33, so it’s about time! I didn’t usually ask anyone over because I don’t cook, but I invited an old grad school friend to come by sort of accidentally. So, I cooked dinner for her and another friend, and it turned out to be delicious. I made an Egyptian pea stew that my mom made growing up — plus rice, cumin roasted potatoes and a simple tomato salad. My mom recited the recipe to me over the phone on her way to the airport. I’ve already invited a friend to my second supper. 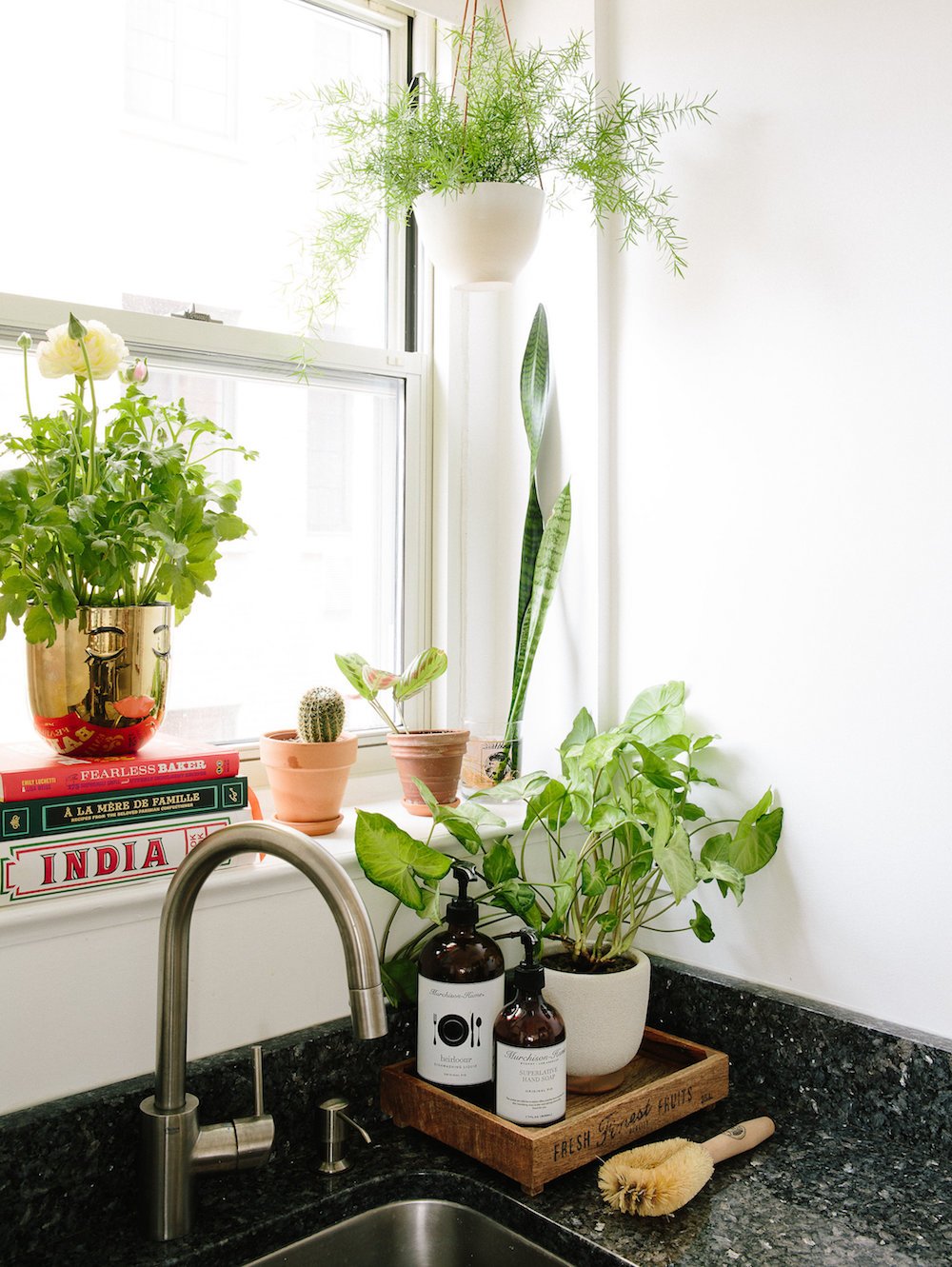 On dinner parties: There’s a legendary guy in Paris — Jim Haynes — who hosts a dinner party every Sunday in his house. He has hosted 100,000 people over the past 30 years! I am an introvert, so I don’t usually do things like this, but when I was in Paris two years ago, I went on a whim. People were eating dinner and drinking wine in the house and garden; there were teenagers and there were 80-year-olds. It was the most beautiful experience. I ended up talking with him about how I found D.C to be a difficult place to create community. He said I should host dinners, even if I just make a big salad. It took me two years, but I did it. 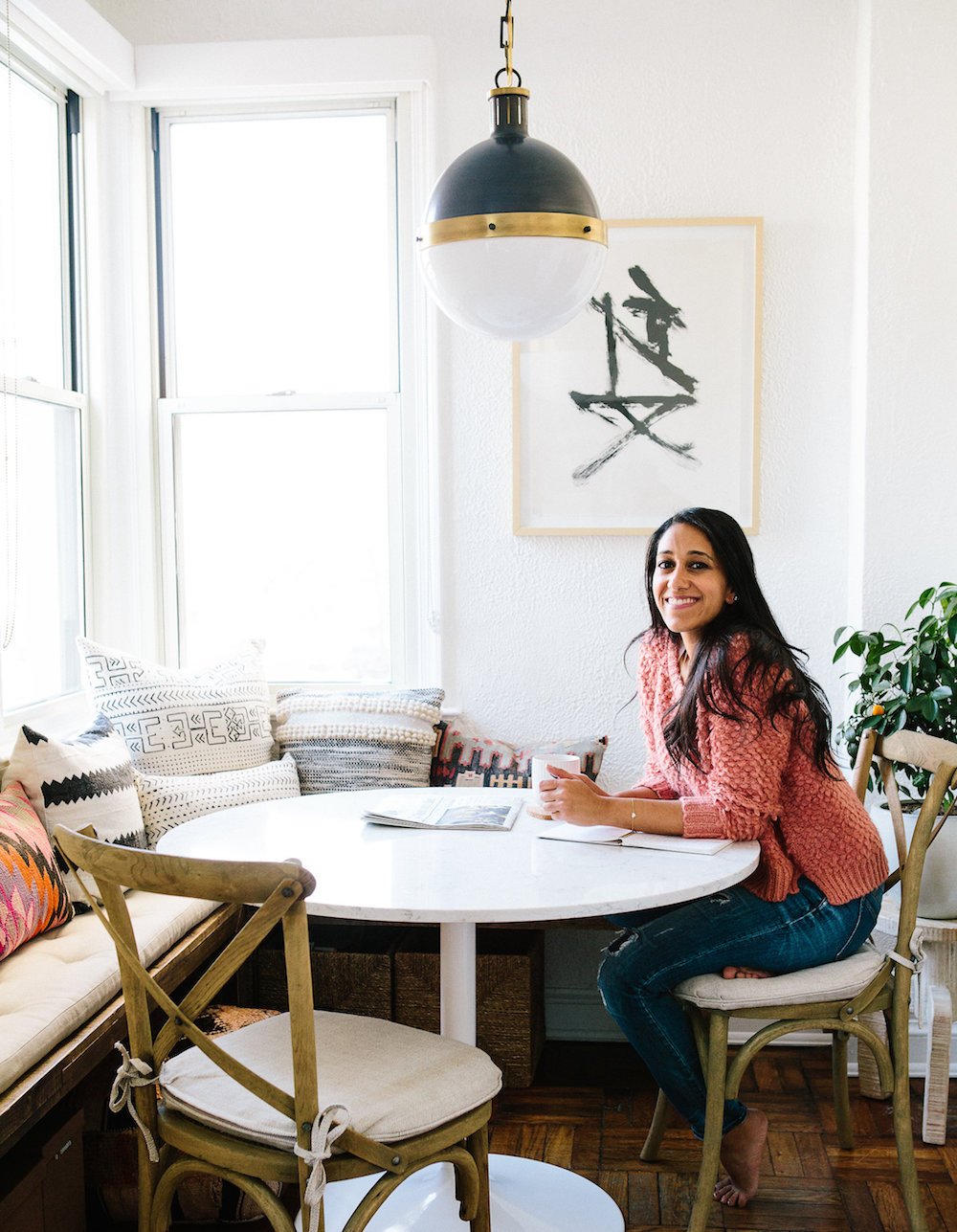 On morning routines: During my sabbatical, I started something called morning pages from The Artist’s Way. It’s an incredible book for all types of people, not just artists, who are looking to unblock something. One of the first exercises is when you wake up, before you check your phone, sit down with a notebook and write three stream-of-consciousness pages. It can be on anything — your dreams, what happened yesterday, whatever. It takes about 15 minutes and is a very cathartic, emotional, sometimes even boring experience that helps you start the day with a blank slate. 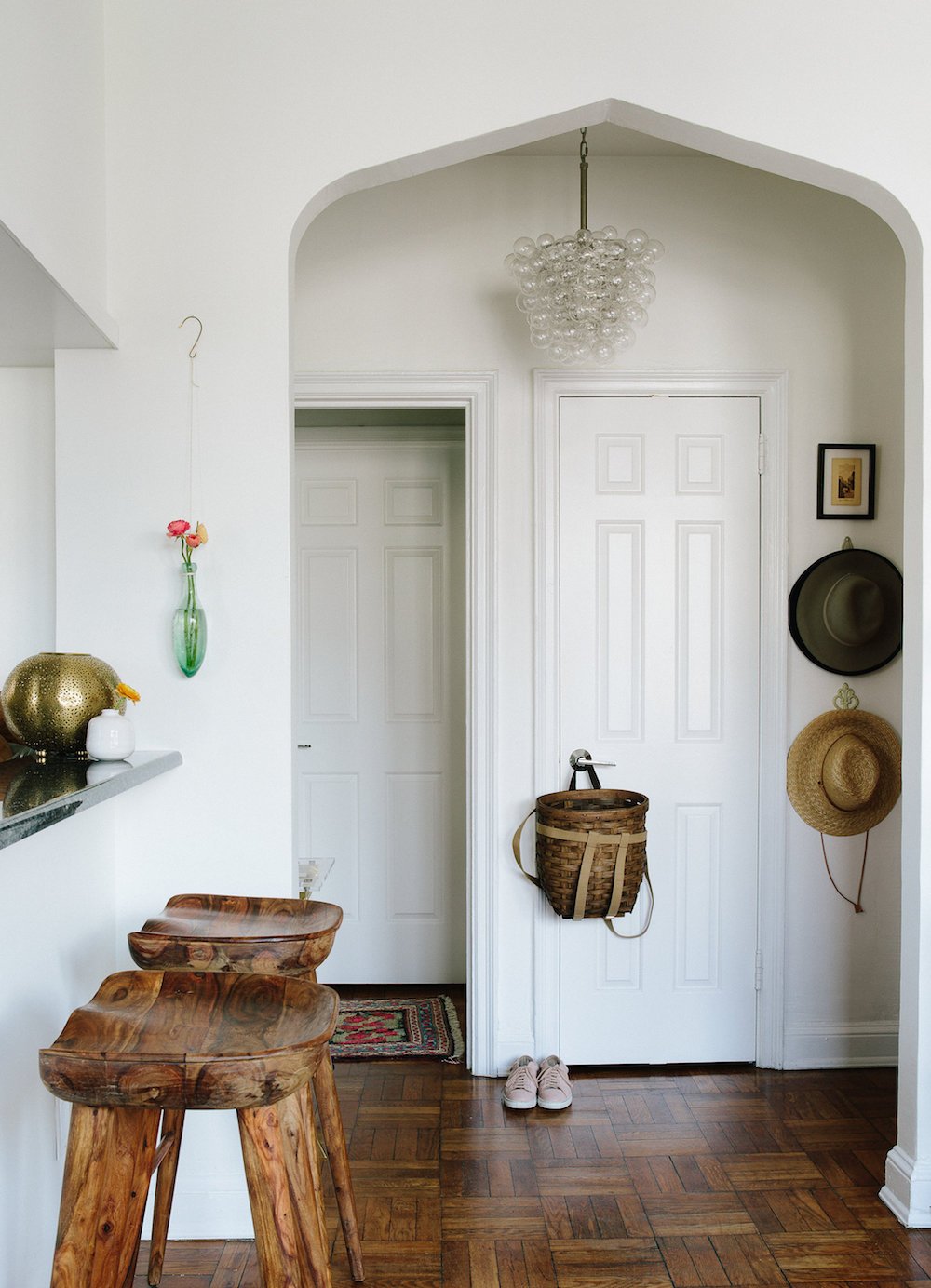 On old meeting new: I’m drawn to things with imperfections where you can tell it was made by a human, rather than in a factory. I like tattered old books where strings are coming off the spine. My home is peppered with those accents, but all the big items — the chairs, the sofa, the tables — are actually new. I wanted them to be all white and wood, so they’d blend in. 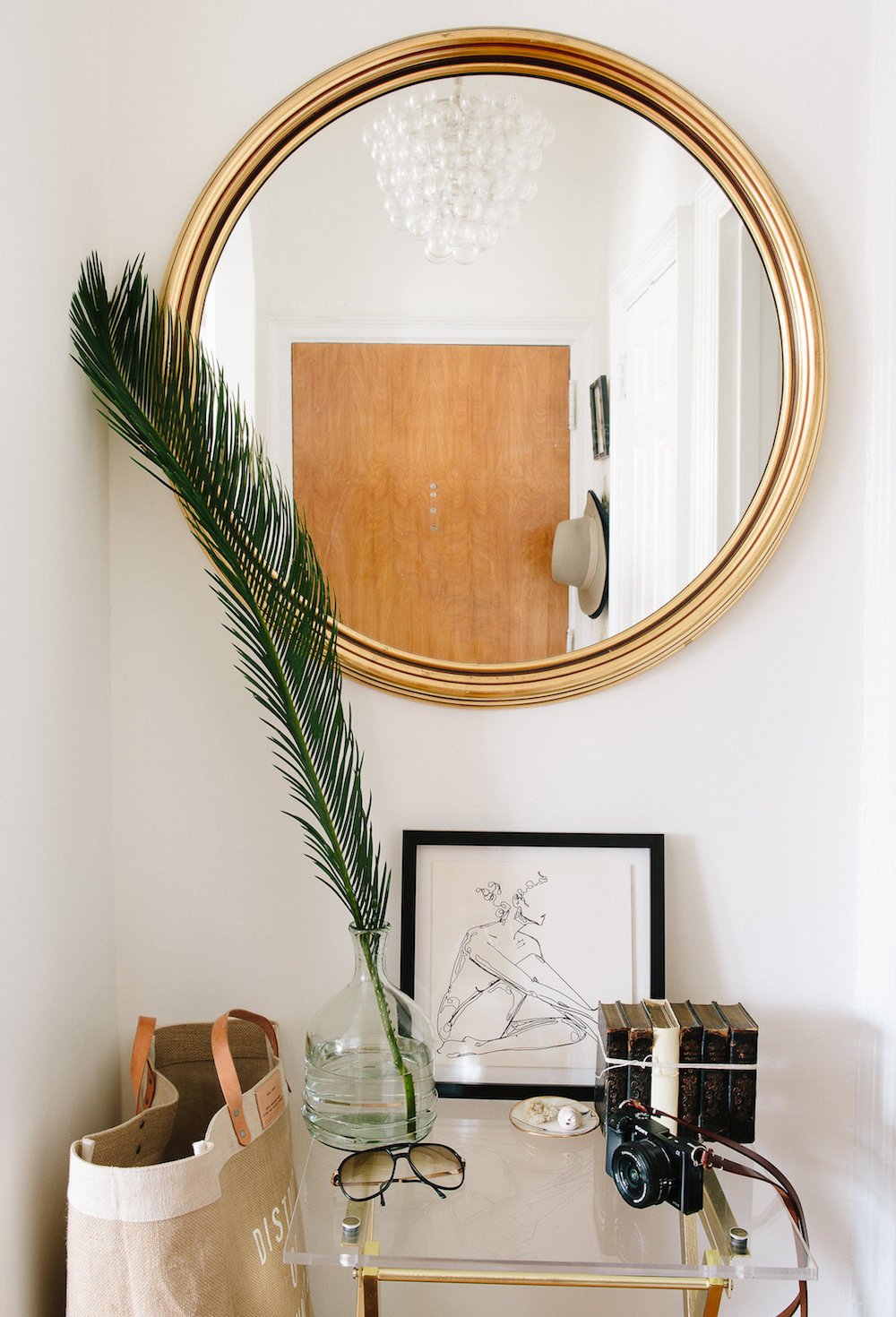 On reminders: Since I’m so far from my family, I like to have reminders of them around me. I have a pair of my grandfather’s sunglasses on my entry table, although nobody would ever know they’re his. My grandfather is like the Godfather. He has such a presence; he wears sunglasses both outdoors and indoors. My family always says that I look like he did when he was young, so last year he let me pick a pair of sunglasses from his very cool collection. 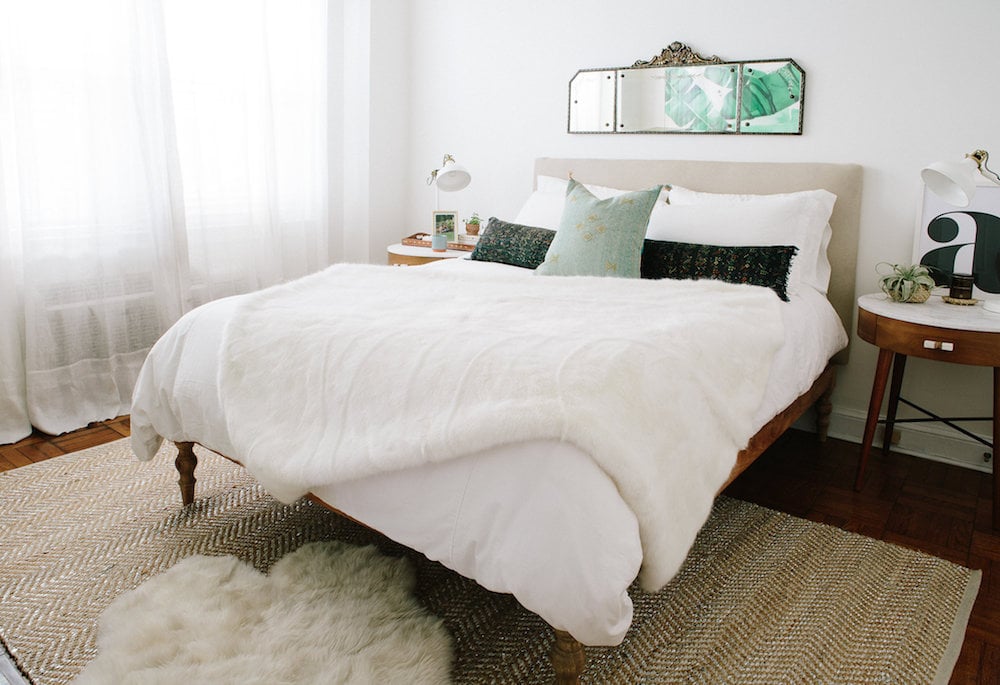 On a calming space: My bedroom is all white with touches of nature. I want it to be a true sanctuary. The only things I use my bedroom for are getting dressed in the morning and going to sleep at night. I don’t go in with my laptop; I don’t dump my handbag there. It looks the same all the time, it’s the way my brain has learned to turn off. 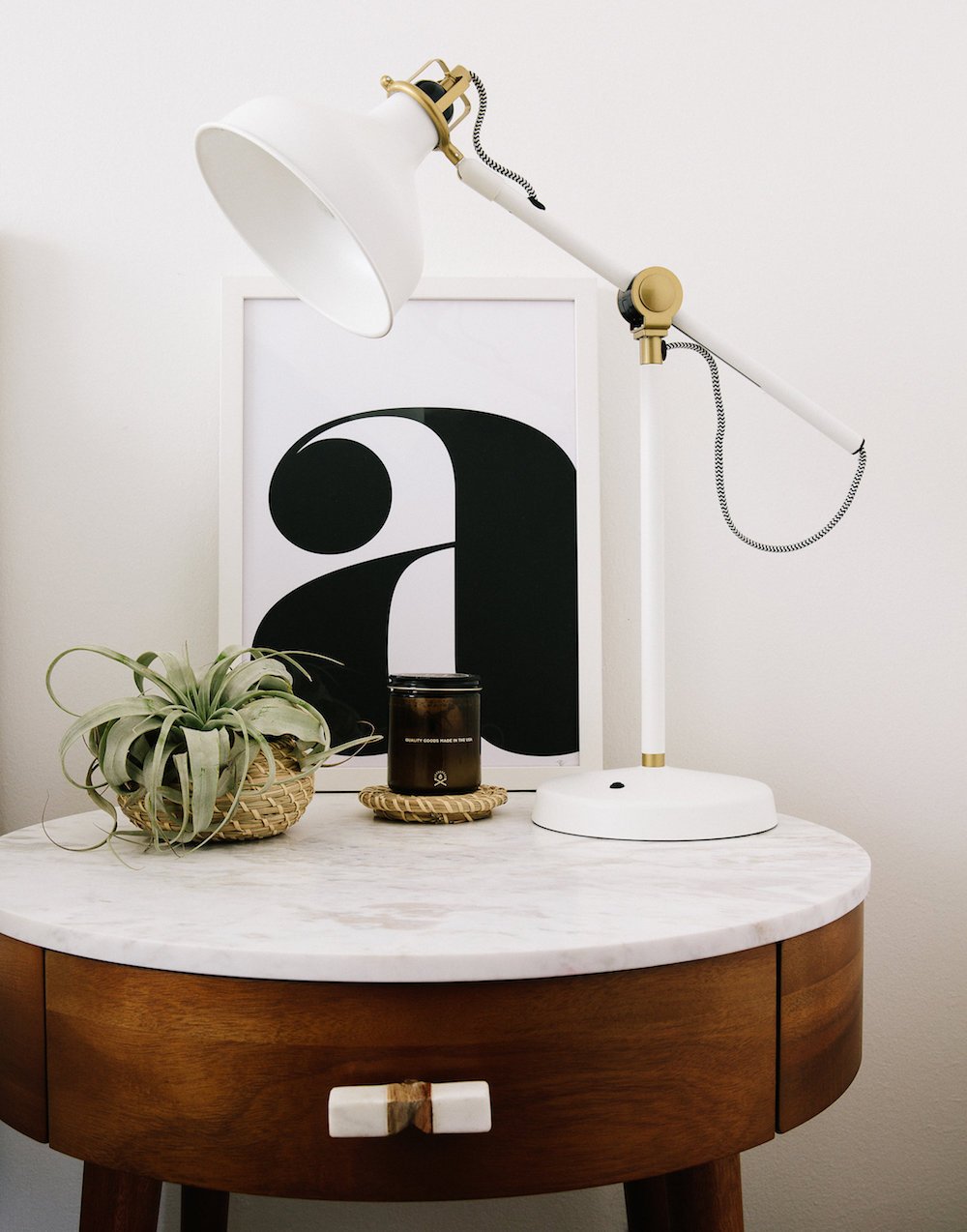 Side lamps: IKEA, similar. ‘a’ print: By Garmi.

On reading before bed: I love to fall asleep reading. I’ve been doing that since I was a little kid. One of the best books I’ve read recently was Belgravia by the guy who wrote Downton Abbey. I’m into family dramas and that time period — it’s such a fast read. 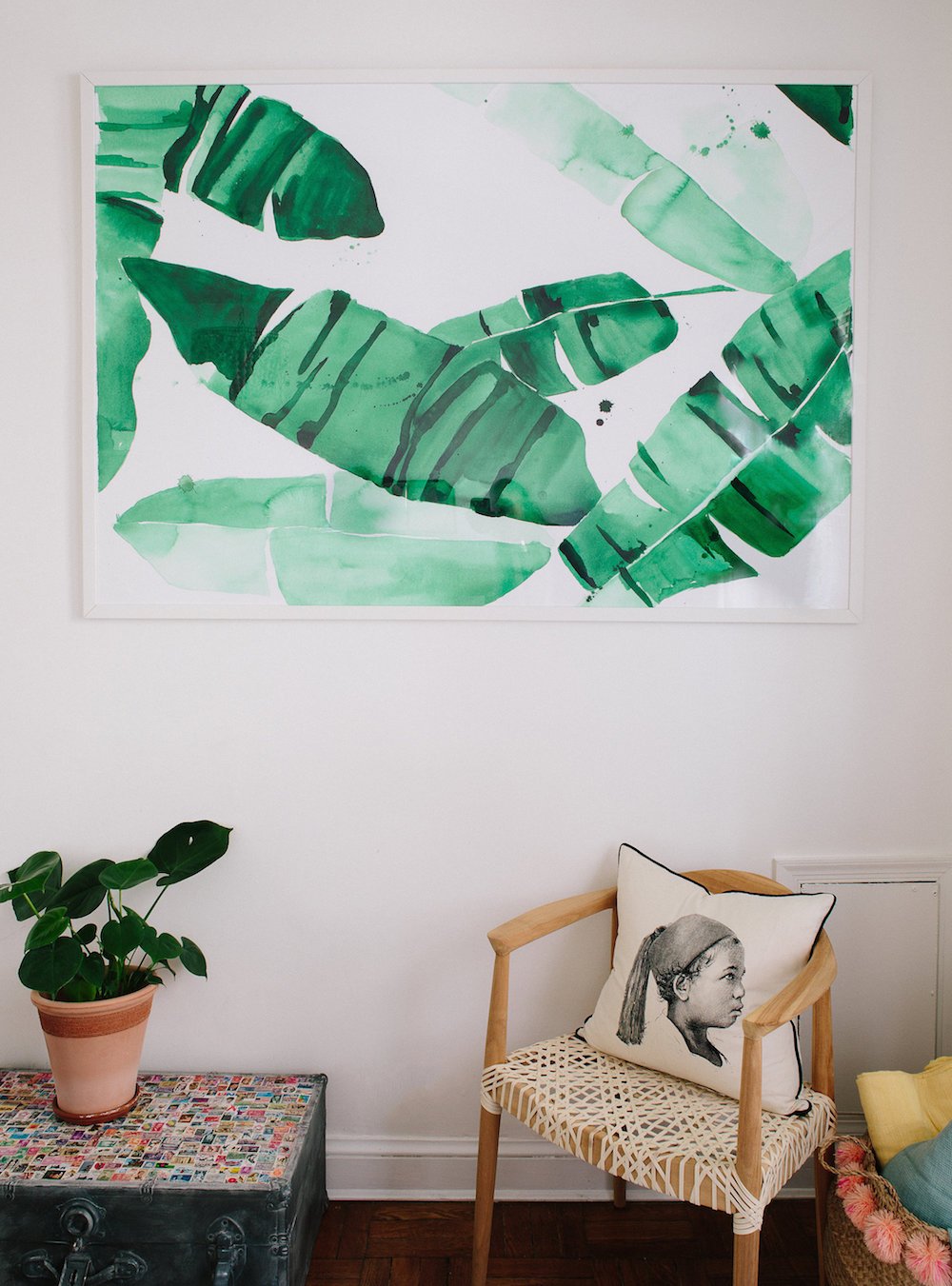 On lotion: Another life-changing thing that I’ve started doing — right before I climb into bed — is to cover my body with L’Occitane Almond Milk body cream. It has a slightly sweet scent, and it changes the way you experience your bedding. When your body is soft and moisturized, and you get into the soft sheets, it’s like having a massage without all the effort and money.

Thank you so much, Amira!

P.S. More home tours, including a book-filled loft and house in the Japanese countryside.

(Photos by Alpha Smoot for Cup of Jo.)

I’m curious what the white paint color is throughout the apartment? I’m trying to choose paint colors now and whites are so hard to get right.

This space is beautiful. We love the subtle pops of color!

Those bedside tables are gorgeous. Does anyone know where they are from?

I’m a year too late :) but they’re the Penelope by West Elm.

Thanks for sharing! I live in paris and I ve never heard of Jim but I ll definitely try. Would it be weird for me to go on my own? I am definitely an introvert but I need to socialize and try out new things. Not ready yet to host myself but toi male it would si East. Love your plants.

Didn t re read my sentence, french auto correct.. Sorry. “But you make it sound so easy”

Not at all weird. I went alone! I hope you have a great time :)

Loved her apartment and life story! What a radiant and inspiring woman!

I would move right into her place! Best home tour ever on Cup of Jo! In my humble opinion! And the plants!

This is my absolute favorite home tour to date! Everything about her space and her commentary is just YES!

Lovely interview! What a beautiful and welcoming looking home.

So beautiful both you and your space. I loved seeing you and your home on one of my fav blogs! And thanks for getting GoodWood mentioned!