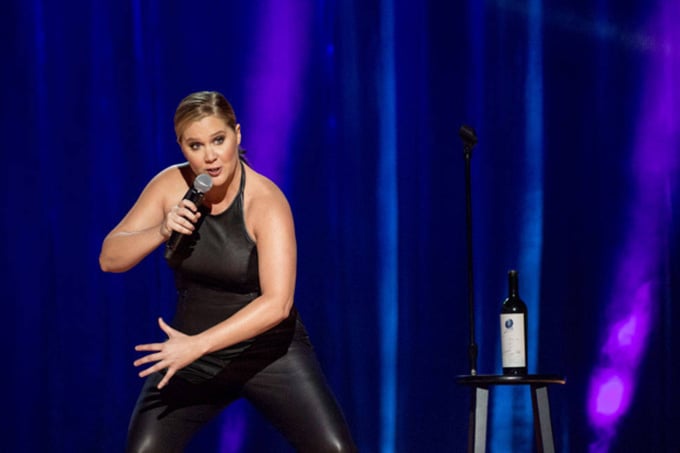 Right now, there are a slew of new comedy specials beckoning from my Netflix queue. I can’t stop watching (and laughing out loud). Each show is recorded live at a stand-up gig, so you get a front row seat to see some of the all-time comic greats from the comfort of your sofa. Here are four I’ve enjoyed so far…

After 12 years out of the spotlight, Dave Chapelle whet our appetite for his return with a stint hosting Saturday Night Live after the election. Now arguably one of the best comedians ever is back with “The Age of Spin” and “Deep in the Heart of Texas.” Warning: Nothing — sex, scandal, race relations, terrorism, Bill Cosby, O.J. Simpson, kids’ lunches — is off the table during these two hour-long specials. But come on, what do you expect?

Watching Amy Schumer perform makes me want to hang out with her and share that bottle of red wine she is drinking onstage during the whole thing. She is characteristically self-deprecating yet empowered in The Leather Special, as when she talks about her body: “Here’s a word that you don’t want to hear when a nude photo of you goes viral: Brave.”

Before there was Trevor Noah, host of The Daily Show, there was Trevor Noah, the stand-up comedian. It’s refreshing to see him back on stage in Afraid of the Dark, and totally clear why he was picked to fill Jon Stewart’s shoes. He has a way of turning world politics into thought-provoking jokes that feel fresh. He’s also good at accents and has the most adorable way of laughing at his own jokes. (He is definitely my latest celebrity crush.)

Iliza Shlesinger may be the least known of the bunch (she was the 2008 and only female winner of Last Comic Standing), but she is definitely the most relatable in Confirmed Kills. I may have actually experienced her “party goblin” phenomenon in my 20s. “Your party goblin — everybody has one — she lives in the back of your brain and she’s basically the creature that comes out when you don’t expect it, and is responsible for any crazy night you’ve had. The thing is, she doesn’t come out when you’re like, ‘It’s my birthday, let’s go out!’ She might — but she comes out on the night where you’re like, ‘I’ll just have one drink…'”

Do you watch stand-up comedy? Who are your favorite comedians?

P.S. Our favorite TV show of the moment and funny Instagram illustrators.

169 COMMENTS
WRITE A COMMENT
Design
most popular
01
My Sister’s Home Makeover
02
What Are Your Top Three Books?
03
The Ultimate TV Guide (If You’re Looking for Something Great)
04
Catherine Newman’s House Is a Joyful Jumble of Books, Games and Cats
05
Behind the Scenes: Making a Magazine Cover
Subscribe
Login
169 Comments
Inline Feedbacks
View all comments
Emily

I’m so surprised by Iliza Shlesinger’s popularity. I watched her special “Freezing Hot” and could not believe all the gender stereotypes she perpetuated. It just felt so dated and one-dimensional. Maybe her other specials are better. Not surprised to see that everyone loved Ali Wong’s “Baby Cobra.” So great!

Bo Burnham! Make Happy is a comedy special in musical form and he is so hilarious, huge celeb crush on him :) and John Mulvaney!

I love Tig notaro! She is one of my very favorite comedians

Moshe Kasher is hilarious, too. I highly recommend his comedy special.

Love all of these! I knew what Amy Schumer’s comedy was going to be like as soon as I saw Trainwreck so her book and the Leather Special didn’t throw me off – I still think she’s hilarious and I can’t wait to see her new movie next month. Definitely going to watch some Ali Wong this weekend! Also Chris D’elia’s special on Netflix is good to0, his bit about drunk girls is spot on.

Just watched Iliza Shlesinger, as recommended – and it is SUPER FUNNY! More posts like this, please :)

My all-time favorite is Aziz Ansari, but recently watched Ali Wong’s Baby Cobra on Netflix. It might have taken over the #1 spot on my faves list.

YES!!! Baby Cobra is right up there with Louis CK for me, though I have a soft spot for Trevor Noah, too. And Cristela’s stand up was both funny and heart wrenching, too.

ALI WONG!!!!!! Echoing all the other comments up here. Not even a question – she is brilliant.

I have watched Ali Wong’s Netflix special so many times. It’s now my go-to for something to have on in the background while hanging around the house.

Louis CK’s new special is great! I’m a long time fan of his and he
Hits some hard topics from his point of view. I just love him.

I’m usually a fan of Amy Schumer, but I found her leather special a bit awkward. Almost like watching a couple fighting. I found it a bit passive aggressive. I don’t like when male comics do that either. I founded it very uncomfortable and not funny. Just leave him.

His specials aren’t super new but my husband and I love Sebastian Maniscalo. He is hilarious and so much of his humor is so relatable. Love it!!

My favourite comedian is Carl Barron. So Australian. I’d love to know if people from other countries think he is funny too!

I also enjoyed Ali Wong’s special and didn’t particularly love Amy’s leather special BUT can I challenge all of us to be cognizant of what we are doing when we make comments like “Ali is SO much funnier than Amy!!” I don’t see anyone pitting male comedians against each other like that! Especially in a field with relatively few women, and in a world where we STILL talk about how women “aren’t funny” I think there is more than enough room to support all of these awesome female comedians!

Hear hear!! And now I totally want to check out this Ali Wong special …

Agreed. I just watched Ali Wong’s special on the recommendation of many lovely COJ readers and my god it was funny.

YES! Completely agree – plenty of laughs to go around :)

Jim Gaffigan is by far my favorite! SO excited we have tickets to see him in November! :) And now I’m excited to check out the Ali Wong special after all of these recommendations!

I simply must add Katherine Ryan: In Trouble (Netflix) to this list!! And agree with everyone on Ali Wong.

I am normally an Amy Schumer fan, but this recent Netflix special missed the mark for me. I really enjoyed her book, even recommended to friends, but this special repeated many of the jokes/stories from the book and overall this show was one- note. There’s better Schumer out there.
I agree with a few commenters before me- Patton Oswald is great and I found the new Louie CK stand-up snort laugh worthy.

Nothing about breakout star Ali Wong and her special Baby Cobra?

Agree on all three.

I lean towards the dry wit of British comedians, in particular dara o’briain and bill bailey, who are both immensely talented. The British have a somewhat dark, and un-self conscious sense of humour that i find really refreshing! Gina yashere is a female British comedian who is also fantastic, and seldom relies on the “every woman” jokes a la Amy

While I don’t know if he has any new stand up tv specials, my fave comedian is, hands down, Jim Gagffigan.

His humor is clean and if you watch Jerry Seinfeld’s brilliant, Comedians In cars Getting coffee, jerry points out the vulgar shtick so many commedians rely on is a crutch. It’s far harder to be clean.

If you haven’t seen CICGC, I highly recommend it. They are short and are so much more than just funny. the interviews feel like you are sitting in on a private conversation between old friends.

My fave epidsodes inclide Alec Baldwin, President Obama, Stephen Colbert and Trevor Noah they are at the same time hilarious but also poignant and illuminating so just go watch it.

My friend just sent me in the direction of Ali Wong: Baby Cobra, which came out last year but is just the thing that I need to watch while trying to get pregnant (and currently failing at it): http://www.vogue.com/article/ali-wong-baby-cobra-netflix-comedy-special

As other commenters have mentioned, Ali Wong, who performed while seven-months pregnant, is also hilarious! Her Netflix special “Baby Cobra” is a must-watch. She is touring now and her shows are selling out like crazy.

Bert Kreischer! I watched his special on Showtime and I howled with laughter the entire time – could not recommend more

I second comments about Amy Schumer’s special – I usually like her comedy but thought the leather special was terrible and terribly filmed. I was really shocked.

I haven’t seen any of these! I love Amy and of course Dave, but I’m interested in seeing Ali Wong’s standup like everyone else is talking about. These days it’s such a pleasure to laugh and release all the stress. Thanks for the recommendations!