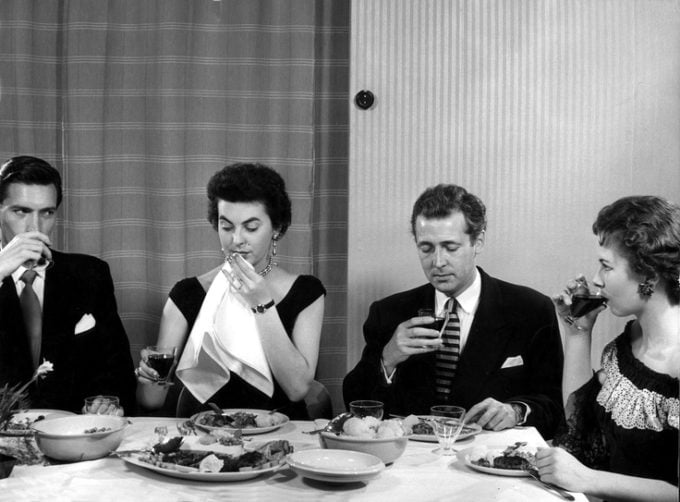 The other day, I went to a dinner party, and as we sat down, the host said those four dreaded words…

“Let’s do an icebreaker!”

She asked us to go around the table and share three fun facts about ourselves. Sitting to her right, I was the first person to go. I scrambled to come up with offbeat stories and ended up spouting random things: “Um, I have a twin sister… Uh, I don’t drink coffee?”

But by the time we got halfway around the table, people had warmed up and were telling EPIC tales. One woman could remember everything she’d done every day of her life (but never realized that was weird until she saw a 60 Minutes piece on endless memory). Another woman had married her husband twice — first at 20, then they divorced at 21, then re-married at 22. A third woman revealed that she had spent years working as the personal assistant to a major celebrity. (!!!)

The party was a huge success — we were laughing so much, and people shared things that would have never otherwise come up. It was the ultimate conversation starter. Every contribution sparked a dozen more questions, and the game lasted the whole night.

Update: Since then, we’ve also asked guests to share either an irrational fear or their celebrity crush — which have led to fascinating answers.

Thoughts? Any other tips for dinner parties?

P.S. Leaving a party, and how to host an articles club.

51 COMMENTS
By Jenny Rosenstrach
Food
Soup for a Friend
October 14, 2020

This was such a great idea! I did this last night with my husband, sister, and her husband. These are people I know very well and it was so fun to learn even more about them

This reminds me of the time when my husband and I went to an acquaintance’s house for a potluck and the hostess pulled out a deck of ice-breaker cards. She drew a card that said “describe yourself in 3 words” and my husband, without missing a beat, said “passionate, ingenious, modest”. That totally broke the ice!

I actually love this idea. You always get that weird sense of anxiety when you get put on the spot, but I imagine this would get conversations flowing much faster than normal… which ends up saving many more awkward silences!

I’ll l write a celebrities names on post its and put each one on my guests back. During the cocktail hour you have to ask a person questions that require yes on no answers until you get the celebrity on their back. So much fun.

Oh we put them on our foreheads. Fun game! always guarantees plentiful laughs.

At a fun multi-family lake trip each night we would gather around the table, we took turns making the dinner each night and the dinner would always start with 2 questions for each person: “what was your pony today?” and “what was your flippin’ unicorn today?” It was so fun for the kids and adults. The kids responses were priceless.

I love this idea! I think we need an entire separate post on how to maintain healthy conversations/relationships with our kids. Kerry, I would love to hear your list!

I love this one: you say three things about yourself – two true and one false – and the group has to guess which one is a lie! It’s always hysterical.

I love this! Sometimes I do a version called, “2 truths and a lie.” It’s still 3 facts but people have to guess the lie!

A colleague is big on improv. He sent an article to me about a game that is super fun- word ball. So now my husband and I have started to play: I say a word “pizza” and my husband will say whatever comes into his head “Italian” and around it goes. Lots of laughs and can be played with any number of friends.

Yesterday my team at work was in a pretty depressing mood so I started an email chain with this starter. We have never laughed so hard! Ordinary people really do have great stories.

It was quite possibly your website that gave me this idea initially by posting a link to the article, but I can’t remember for sure. It was a NY Times article about how granny panties were back in style and thongs were oppressive, anti-feminist. I remember being totally shocked by this article. (Full disclosure: I’m a former college volleyball player and those spandex we wore meant we all got very comfortable with wearing thongs.) A few days later was my 29th birthday, and I invited a bunch of my girlfriends over for a casual dinner. I brought up the granny panties vs. thongs debate and it led to the most hilarious conversation.

At Thanksgiving last year I set out a tin alongside some blank cards and pens and wrote at the top “I’m Thankful For…”. People filled them out during cocktails and when it came time to sit down we passed the tin around and every person read one card each. It’s totally anonymous and gets so many memorable reactions!

Haha! I was wondering where the part was where she shared the icebreaker that really worked! I would feel kind of mortified to go first for this “game”. I do love the idea of sharing one thing at a time around in a circle. I’m going to a big dinner with some close friends and some strangers this weekend, so I think I’ll try it!

I worked at a startup and at the first all-company lunch of your first week of work you had to tell THE WHOLE COMPANY something about yourself that cannot be found on the internet…. I also went first that day so I shared the lamest fact about myself (can’t even repeat it) but everyone else told hilarious stories. Point: sucks being the first person in these situations, right?!

I believe the person to instigate the Game should always go first. Followed by someone who also has played it or confident to do so, then everyone else.

I think this is a great idea too. For ideas of questions to ask, check out my website…lots of convo starters there!
http://www.thebookmarkk.com

I will try this :) although it works best for strangers i think

I went to one party where the host asked everyone to tell the story of the first time they got really drunk. The stories were hilarious, and I don’t even drink.

I make name tags for people and they have 4 questions that they have to answer. That way you walk around with your “ice breakers.” I’ve had things like:
-My name that I don’t use
-City I would most like to live in
-Someone I would like to meet
-If I had 3 unexpected hours of free time I would
-I would never want to visit

I make up new ones for every party.

My favorite icebreaker is called 7 things. You go around the table 7 times sharing things you love or that fill you with joy and why. You don’t say them all at once so I tend to find inspiration in what others have shared, it’s a feel-good conversation, and you find yourself bonding with others in those “OMG me too!” moments.

I love this idea. It’s great for introverts and extroverts. It focuses on positives things that people might actually find in common much better than those truth or lie or tell me something about yourself statements.

I love the idea of an icebreaker. We recently went to a wine party at our neighbors house, and it felt like it took awhile for all of us to get a good conversation going. The wine helped eventually, but an icebreaker would have got the ball rolling much earlier in the night.

How funny that you don’t drink coffee! It makes me a little cuckoo too, but I can’t help myself! ha! In hindsight, what other names would you have named Cup of Jo instead?

haha i have no idea! my brother actually came up with the name. he was the one who convinced me to start the blog a thousand years ago! :)

I love that! It can be so awkward but icebreakers are fun get to know yous

I think these “go around the table and tell us…” are awful. They feel forced and you’re left feeling like you have to come up with something that wows the rest of the room. These are great for extroverts but something like this scares most introverts. I personally prefer something as simple as a question that everyone could answer and which could lead to more in-depth conversation.

I appreciate this comment, Olivia! Do you have any ideas for questions to ask introverts that aren’t so intimidating to answer?

Nothing strikes fear into my heart more than hearing the words “Now let’s go around a circle and…” These games are perfect for extroverts, but even among my best friends and family, the nerves and pressure would hit hard. A great reminder to consider your audience!

I play a version of this called 2 truths and a lie, where you give 3 ‘statements’ about yourself and everyone has to guess which one is the lie!

I was once at a gathering where this game was played, and one of the men — an idiot? — shared that he had killed someone. That turned out to be true. It kind of killed the party vibe…