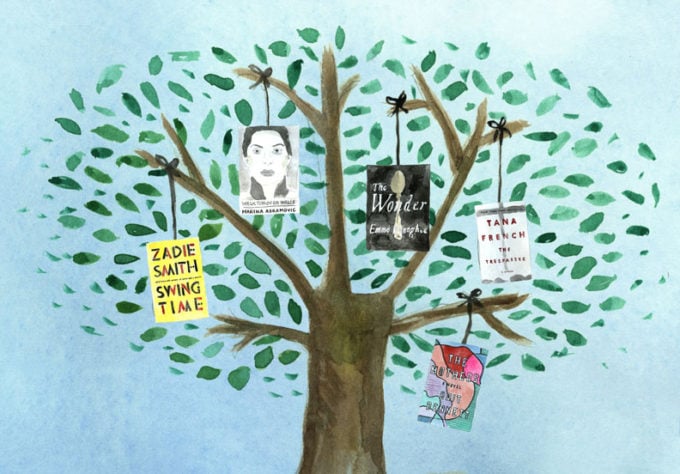 What books are you excited to read over the next few months? It’s peak season for new releases, and this fall’s crop of titles — from a thriller set in 19th-century Ireland to a witty memoir by a celebrated artist — does not disappoint. Here are five top picks…

The Mothers by Brit Bennett (October 11th)
Brit Bennett’s first novel is easily one of the most anticipated books of the year. (Our office’s single advance copy was consumed in one big gulp by each of us.) Bennett has written popular think pieces for the New Yorker, the Paris Review and Jezebel, including an essay on race that has been shared almost two million times, but fiction is clearly her gift. The Mothers takes place in small-town, contemporary California, where a 17-year-old girl’s accidental pregnancy following a romance with the local pastor’s son sets the scene for a beautifully written, powerful coming-of-age story.

The Wonder by Emma Donoghue (September 20th)
If you love historical fiction or psychological thrillers, this book (like Donoghue’s last novel, Room, which became an Academy Award-nominated film last year) will keep you up all night. Set in rural, 1850s Ireland, in the immediate wake of the Potato Famine, The Wonder centers around an 11-year-old girl who says she’s been fasting for four months. After an English nurse is summoned to see whether it’s all a hoax, the two strangers develop an intense friendship that explores miracles and mortality.

Walk Through Walls by Marina Abramovic (October 25th)
Few people have the chance to witness a groundbreaking artist evolve from the first spark of talent all the way to huge fame. But this memoir, written in Abramovic’s dryly funny, unflinching voice, offers just that experience. My heart raced as Abramovic, the pioneer of modern performance art, described her first art lesson in Communist Yugoslavia, at 14, when her teacher poured gasoline on a canvas and lit it on fire. Abramovic, who once lived for 12 days inside a Manhattan gallery allowing people to watch her eat, sleep, shower and even pee, 24 hours a day — tells an amazingly compelling story of discovering freedom of expression in a society that banned it, and the 45-year art career that followed. (Remember this?)

The Trespasser by Tana French (October 4th)
This is the kind of book you’ll want to dig into with all the lights on. It’s the sixth installment in Tana French’s acclaimed Dublin Murder Squad series, though it doesn’t matter whether you’ve followed the whole saga or not (each novel in the series focuses on a different detective and comes across as independent from the rest). The Trespasser is told through the eyes of a tough, working-class Irish detective who’s recently found herself at odds with her colleagues. But when she starts investigating a new domestic violence homicide that initially seems humdrum, she and her partner realize something sketchy is going on within their own detective ranks. Again: Don’t read in a creaky apartment at night.

Swing Time by Zadie Smith (November 15th)
A little-known fact about the British author Zadie Smith is that she’s a talented jazz singer and once thought about becoming a profession musician. In her lyrically written fifth book, music is a central theme. As she describes it, it’s “a story about friendship and music and stubborn roots.” The narrative covers 25 years in the lives of two young black girls, as they grow up as aspiring dancers in London and later end up leading opposite lives in New York and West Africa. Their friendship ultimately breaks apart but affects them forever.

Two more we’d love to read: Future Sex, a non-fiction exploration of sex and dating in digital culture by Emily Witt; and Ian McEwan’s Nutshell, which is described as a modern Hamlet told from the viewpoint of a baby in the womb (!).

Tags: alessandra olanow
140 COMMENTS
WRITE A COMMENT
Design
most popular
01
My Sister’s Home Makeover
02
What Are Your Top Three Books?
03
The Ultimate TV Guide (If You’re Looking for Something Great)
04
Catherine Newman’s House Is a Joyful Jumble of Books, Games and Cats
05
Behind the Scenes: Making a Magazine Cover
Subscribe
Login
140 Comments
Inline Feedbacks
View all comments
Gina

I want to read all of these. Nutshell! Probably the most unique perspective (that worked) I have ever encountered. So good!

I can’t wait to read the new Zadie Smith book. She is amazing. I am currently reading Paradise CIty by Elizabeth Day and I love it.

I’m really interested in reading the Mothers. I love posts like this as it helps me find new reads, thank you for sharing! I’m currently reading ‘The end of the world running club’ a real slow burn but not like anything I’ve ever read before!

Amazing post! I’m really looking forward to The Mothers! I’m currently finishing up my summer reads and putting together my fall reading list.

I recently finished Food and the City by Ina Yalof. It’s easily one of my favourite reads this year and I’ve read a ton (currently on my 50th read!)
It’s a behind-the-scenes look at New York’s food world from the perspective of professional chefs, restaurateurs, line cooks, food vendors, and purveyors. Loved hearing people’s stories on how they got into the food industry, the trials they faced, and how they overcame them. Brilliant!

The Knockoff by Lucy Sykes and Jo Piazza (I read it twice!)
The Summer of Good Intentions by Wendy Francis (Also read it twice!)
Big Little Lies by Liane Moriarty
The End of Your Life Book Club by Will Schwalbe
Inside the O’Briens by Lisa Genova
I Let You Go by Clare Mackintosh

Before the Fall by Noah Hawley. I highly, highly recommend! This is my second book from the producer and screenwriter of Fargo. His screenwriting really shines through! I also recommend his psychological thriller, The Good Father which I devoured earlier this summer.

The Making of a Chef by Michael Ruhlman. This one has been on my reading list for years and I am LOVING it!

Lexi Mainland, Thanks for these five recommendations.
I have a book you may be interested in.
“It’s Already Tomorrow Here: Never Underestimate the Power of Running Away”

I would love to hear your thoughts.

This has been one of the best years for me fiction-wise!
The following reads are all beautifully narrated, emotionally intelligent and packed with wisdom and insight:
A Little Life, by Hanya Yanagihara
Elena Ferrante’s Neapolitan novels
The Interestings, by Meg Wolitzer
Purity, by Jonathan Franzen
The Girls, by Emma Cline
Fates and Furies, by Lauren Groff
A Million Little Pieces, by James Frey (an oldie but goodie)

Thank you so much for the recs!

This summer I tore through the Neapolitan Novels and anything I could get my hands on by Elizabeth Strout and Kent Haruf.

I’m on the waitlist at the library for Homegoing and The Wonder!

I’m sad to say I haven’t heard of The Wonder before but it sounds fantastic! I love a good historical fiction and this sounds like it will be top notch! You’re so right, it sounds like a great fall read.

I absolutely love Tana French! So happy you included her, and I will definitely check some of these out.

Great recs! I am reading When In French by Lauren Collins right now and I love it.

I’m looking forward to checking out When in French!:)

Don’t have it yet but eagerly anticipating the arrival of my copy of Bruce Springsteen’s autobiography “Born to Run.” The boss in his own words. Yes, please. Also, if you’ve never picked up “Shadow of the Wind” run out and grab a copy this moment. It is one of those books that you wish you could forget just so you could read it all over again for the first time.

I just finished The Atomic Weight of Love… and I can’t shake it. It’s one of those that will stay with me forever.

I’m reading The Nix right now – think The Goldfinch, but not really, but almost-ish. It’s amazing! I’m also reading/listening to The Course of Love by Alain de Botton and it’s breathtaking.. It really makes you think about your relationships, especially with your spouse/SO. I can’t recommend it enough.

Thanks for the list! I was finishing up my current book and wasn’t sure what to read next. Perfect timing.

Just finished Lilac Girls, The 9th Life of Louis Drax and Girl in Translation and loved them all. The Summer that Melted Everything was very good, but dark.

Love these posts! Always looking for good recommendations. Thank you.

I’m in the middle of this book now and love it!

I haven’t read that yet, but I read another one of his, Britt Marie Was Here, and it charmed my socks off!

Great recommendations – thanks, particularly like the sound of “the Mothers”. US book releases differ a bit from the ones here in the UK – often they aren’t yet available over here, but I will add to my Amazon ‘wish list’.
I have just started “the year of the Runaways” by Sunjeev Sahota, it is set in Sheffield in England, a city I lived in when I was in my 20’s so I am looking forward to getting into that.
Also just to recommend “a year of Marvellous Ways” by Sarah Winman – a magical and very beautifully written book, I think you would enjoy it.

Commonwealth by Ann Patchett…the family that is forced upon us when parents divorce and remarry….rich characters, written with a clear eye and deep affection.

Your book recommendations never steer me wrong! Off to buy all of these!

I love all the recommendations! I recently discovered Ariana Franklin and am enjoying “Mistress of the Art of Death.” I can’t wait to read the other 3 in the series.

I love these posts because I’m always making a list. Thanks! I just finished “When Breath Becomes Air” and I can not thinking about it. I’m currently reading “Before the Fall” – it is a great read. And, I’m looking forward to the paperback version of “The Ramblers” in October! Happy Fall!

Jo’s sister is Paul Kalanthi’s wife. I learnt about the book from this blog and also enjoyed it!!