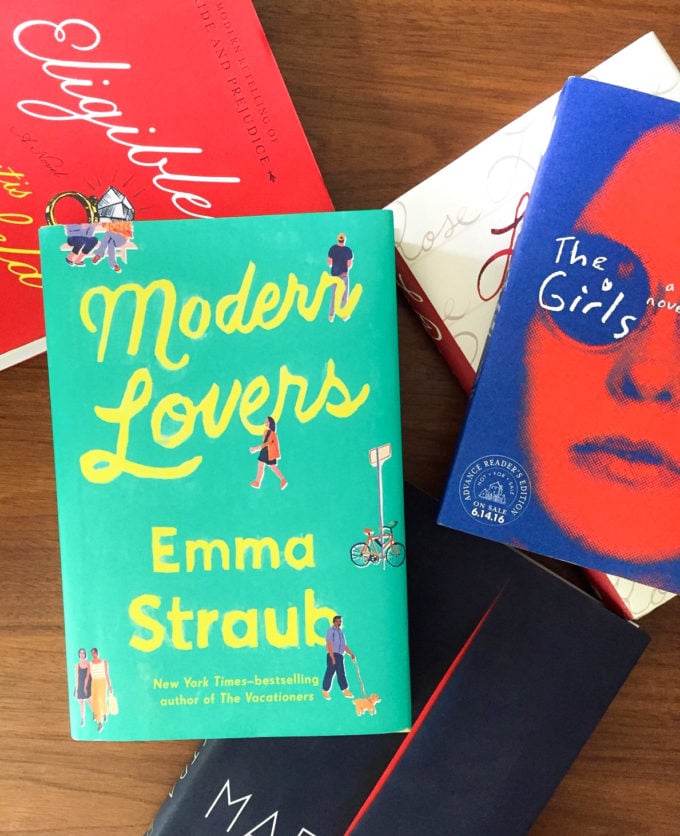 Over the winter, I hit a weird wall with books. I kept putting them down after 15 pages, feeling restless. What was wrong with me? So, this spring, determined to get excited about reading again, I rolled up my sleeves and researched all the new titles. I asked book editor friends which ones were getting crazy buzz and scoured the reviews. Here are five I’m loving, and please tell me what’s stacked on your night table…

The Girls by Emma Cline
Last night, Alex was out to dinner, and I climbed in bed and cracked open this book. Ten minutes later, I had broken out in a cold sweat and was texting him, “When will you be home? ETA???” Cline’s debut novel — which has already been snatched up for a film version — is set in a hippie commune in 1969 and is loosely based on the Charles Manson murders that took place that summer. A 14-year-old girl, Evie, falls in with the wrong crowd and joins a community in Marin County, California, that’s presided over by a charismatic, volatile leader. Beautifully written and terrifying.

LaRose by Louise Erdrich
This book has a heartbreaking premise: While deer-hunting in North Dakota, Landreaux Iron accidentally shoots and kills his neighbor’s five-year-old son. Guilt-ridden and tormented by grief, Iron and his wife decide to give their own young son, LaRose, to the boy’s parents. “Our son will be your son now,” he tells them, acting on a tribal principle from his Ojibwe heritage. The saga that follows is beautifully told by the bestselling author Lousie Erdrich, who herself is part Ojibwe (and won the 2012 National Book Award for The Round House). It is painfully sad at times, but you can’t put it down.

Maestra by L.S. Hilton
When an author’s very first book immediately hits the New York Times bestseller list, you know there’s something remarkable about it. In this case, it’s… the sex. The New York Post said Maestra “makes ’50 Shades’ look like the Bible.” The psychological thriller follows Judith Rashleigh, a young assistant in London’s art world who’s fired (and then goes on the run through France and Italy) after she uncovers a conspiracy. If you liked The Talented Mr. Ripley, you’ll love this. I tore through it in a few days, and Stella and ten of her friends bought copies for their book club.

Eligible by Curtis Sittenfeld
An updated Pride and Prejudice, Eligible tackles all the big themes found in Jane Austen’s 1813 novel — manners, gender, romantic relationships and family dynamics — through a funny, modern lens. Here, “Liz” is as a writer and Jane is as a yoga instructor, while “Chip” Bingley is a doctor freshly sprung from an appearance on a reality T.V. show. And so on and so forth. I thought the dialogue was a little forced, but Lexi and Caroline are enthralled. (Have you read it? I’d love to hear your thoughts.)

Eleven Hours by Pamela Erens
It may be hard to envision an entire novel about a woman experiencing labor, but Pamela Erens’s new book makes those eleven hours extremely compelling. The protagonist, Lore, arrives at a hospital in New York to have her baby mysteriously alone. Her Haitian delivery nurse, Franckline, who is newly pregnant herself (although no one else knows), quickly morphs from a stranger to her closest ally, supporting her unflinchingly through her dreamy then harrowing experience. Erens weaves the broader stories of both women in and out of Lore’s suspenseful birth experience, drawing connections between them that are surprising and intimate. Bottom line: Women are heroes. 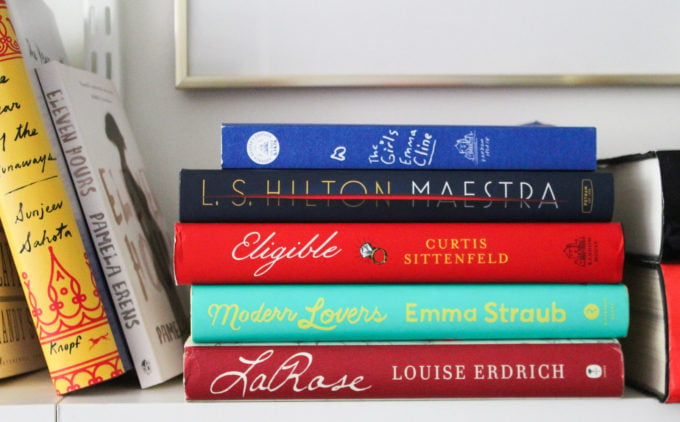 Modern Lovers by Emma Straub
Emma Straub’s highly anticipated new book comes out May 31st. Modern Lovers is the entertaining story of a group of college friends and former bandmates, who are now living in Brooklyn. As they approach fifty, they’re nurturing their careers, examining their marriages and rediscovering themselves while their own kids get ready for college (and starting sleeping together). Straub has such a funny, perceptive writing style, you feel like you’re close friends with them all.

The Year of the Runaways by Sunjeev Sahota
Shortlisted for the Man Booker Prize, The Year of the Runaways captures the difficult plights of four young immigrants (three men and a woman) who arrive in the U.K. from India in 2003 without documentation, seeking better opportunities and income. The book is divided into four novella-length chapters, which depict the daily struggles of each character, and it feels especially timely right now with the refuge crisis in Europe.