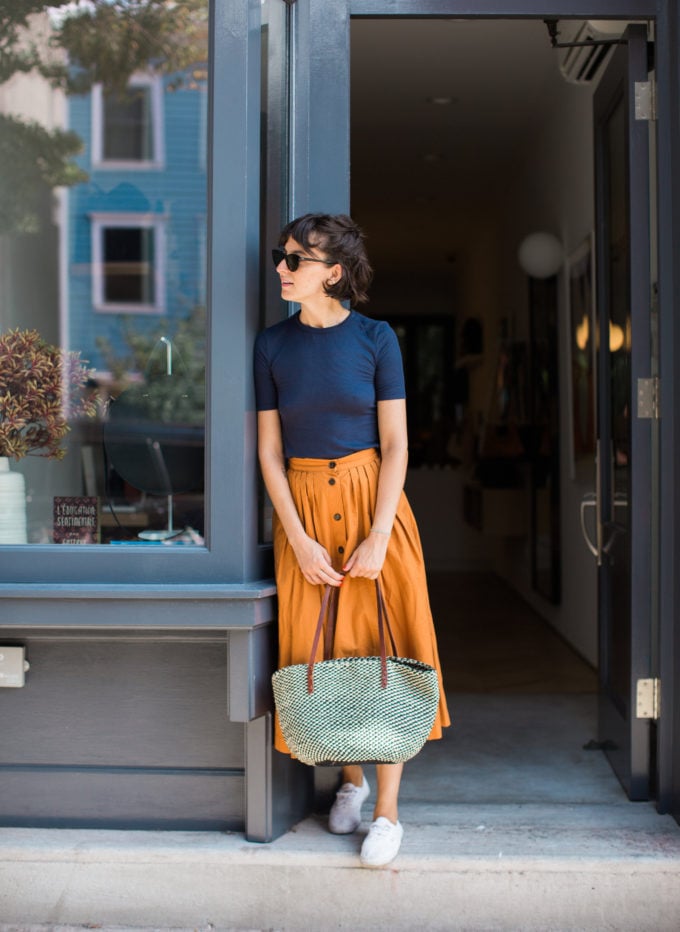 Whenever we walk by Clare V.’s Brooklyn store on the way to work, there’s a woman standing in the doorway looking impossibly adorable. Over time, we’ve gotten to know Sarah Ali Pacha, the store manager, and she’s just as sweet and warm as she is stylish. Originally from Algeria, Sarah moved to the U.S. in 2011 and now lives in Crown Heights with her three-year-old son, Laeth. Here, she shows us five outfits she’s been wearing all summer and reveals the one thing she’ll never put on… 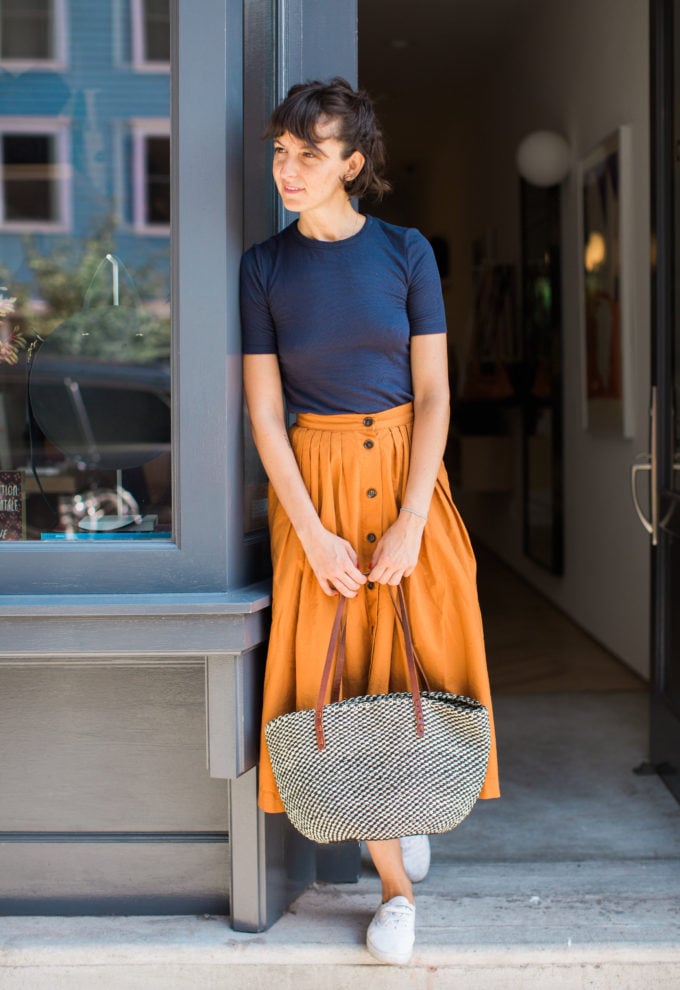 “I really relate to the style in French New Wave films by Truffaut and Godard from the 50s and 60s, like Jules and Jim or Breathless. It’s a sexy look but also really wearable. The brands I shop from again and again are American Apparel, H&M, Zara and ASOS, especially for tops, which I don’t think you need to spend a ton on. A great T-shirt is a great T-shirt. I also like wearing independent designers like Black Crane and Maryam Nassir Zadeh.” 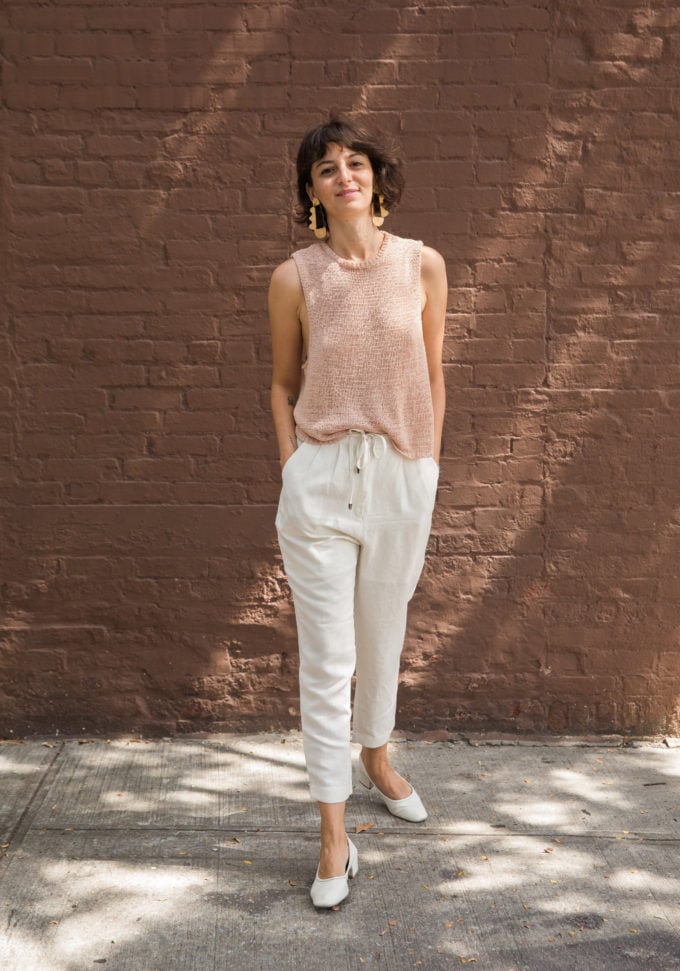 “I never wear a bra. I have small breasts, so I honestly don’t need one. It would feel like covering something up for no reason. I’m the same about makeup. I wear some mascara or blush, but that’s it. I don’t want to conceal too much and I think I look nice just how I am.” 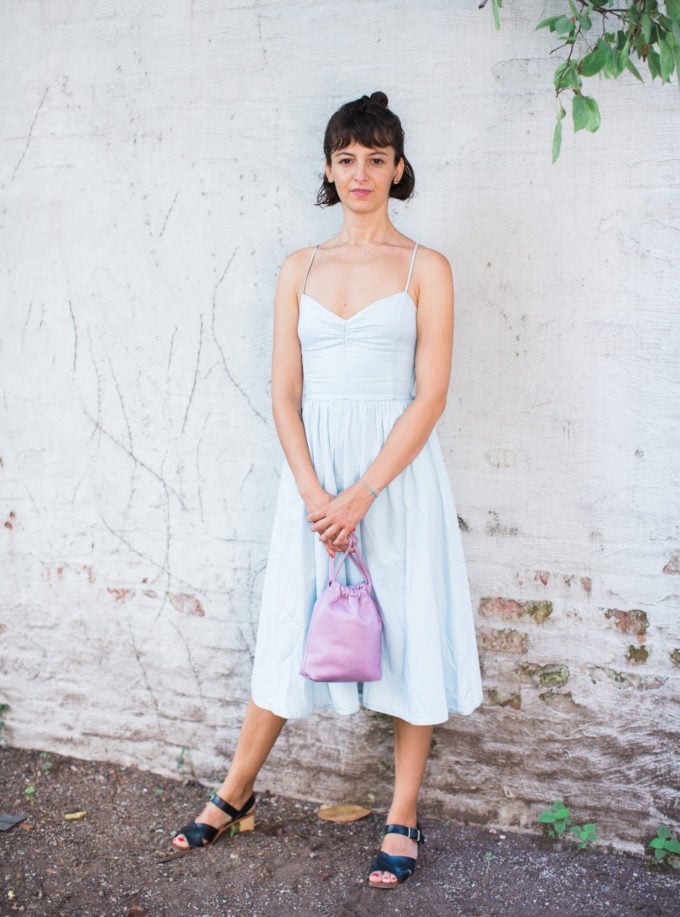 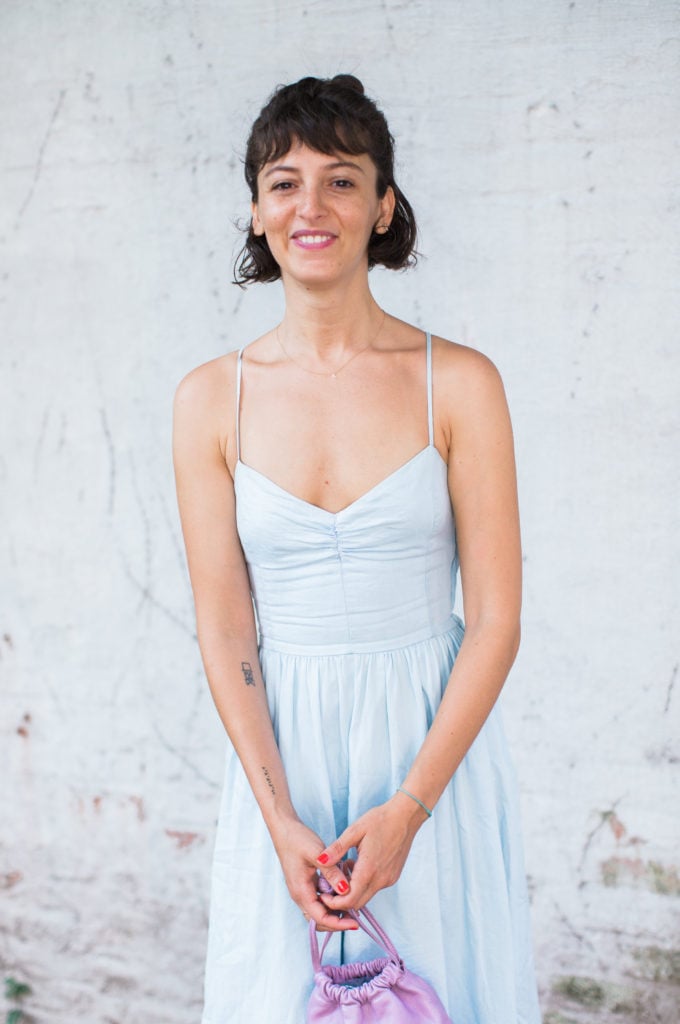 “Bags and shoes are where I’m willing to spend a little more because they last a long time. I used to be the type of person who had one bag and only a few shoes, but now I have a few more and I try to alternate them all the time. They really make an outfit — a simple dress or jeans become much more interesting.” 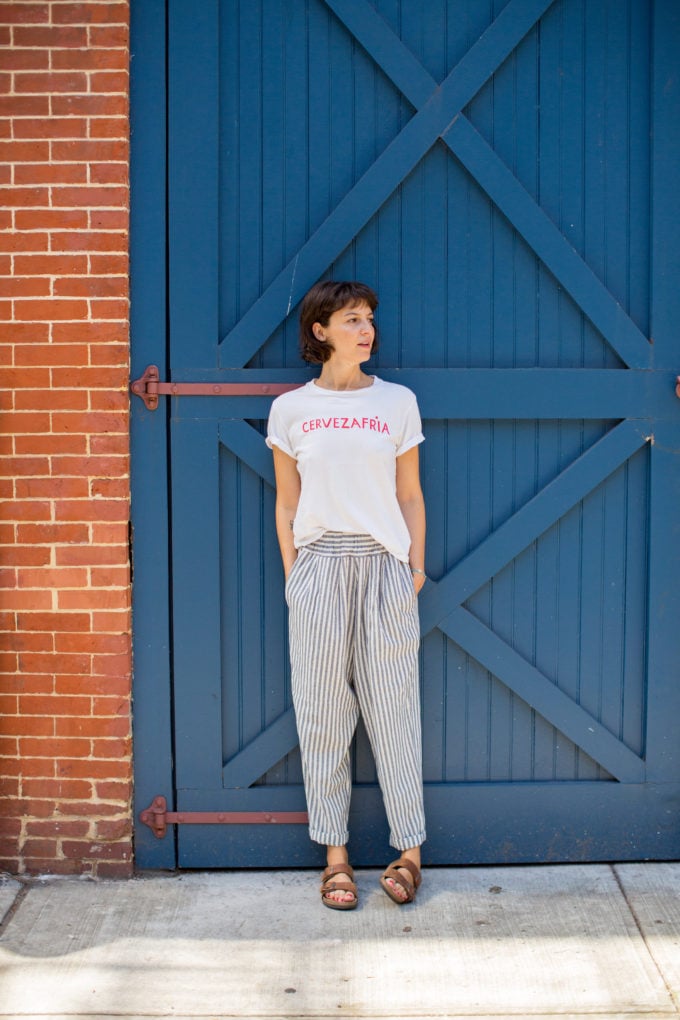 “One of my favorite categories of clothes is trousers. I have a lot of them. They’re tomboyish but elegant. You can style them in a very feminine way if you want to, but they’re still easy to run around in. I especially love the shapes of all the pants made by Szeki.” 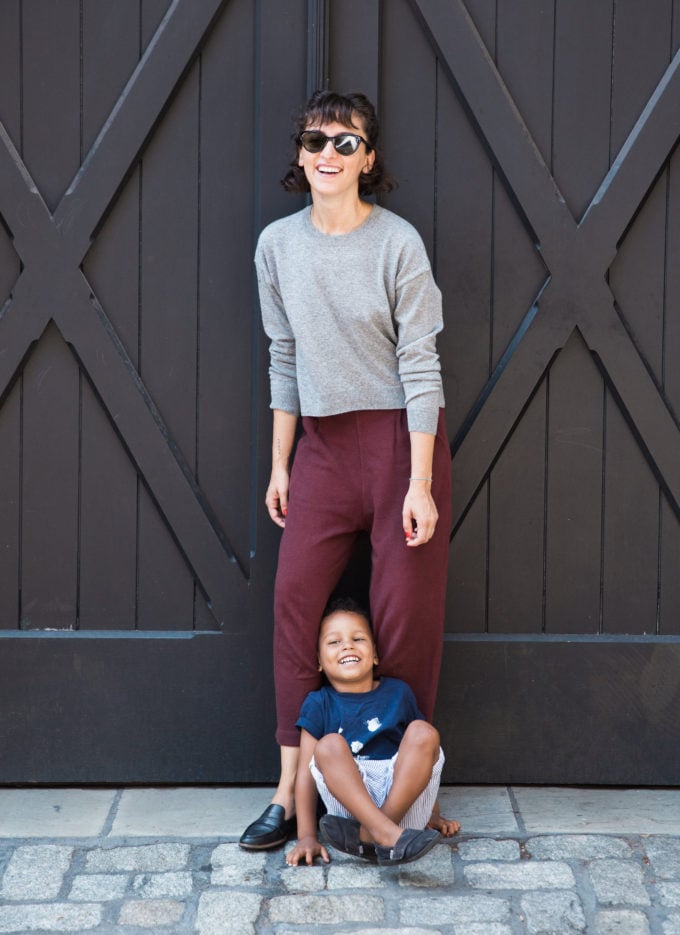 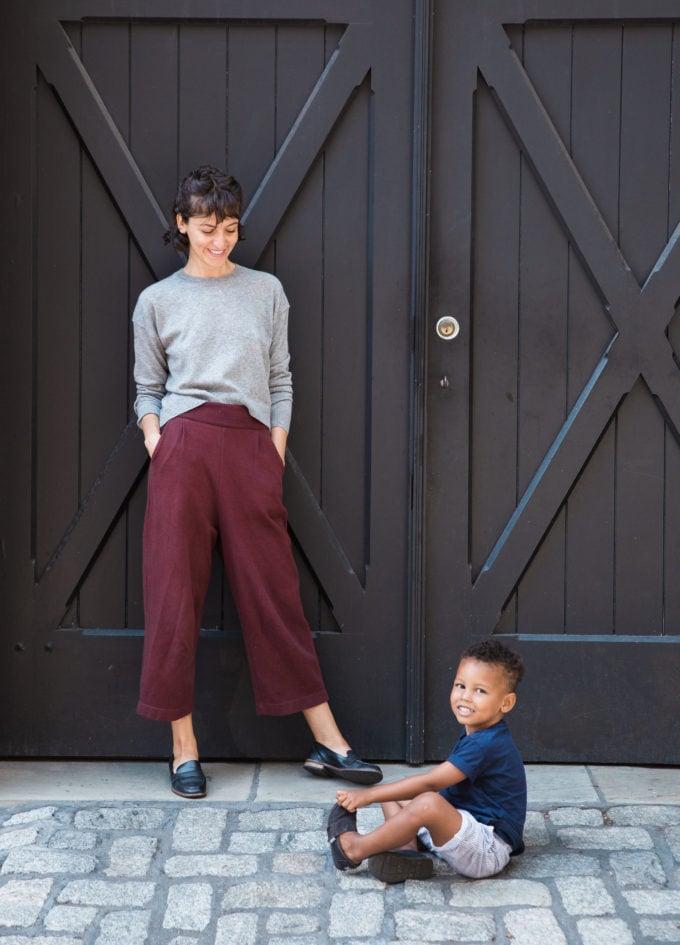 “When it comes to dressing as a mom, the most important thing to me is to keep my personality in my clothes. I can wear things that are good for playing and running around the city, but they still have to let me feel like I’m expressing the real me, not just the mom me.”

Thank you so much, Sarah! Your style is fantastic.

(Photos by Ana Schechter for Cup of Jo. Interview by Lexi Mainland.)

I keep coming back to this and try to find those black or navy sandals she’s wearing with the chambray dress and I can’t find them anywhere! Anyone have any clue?

If so, MORE PLEASE!!! I don’t have much interest in makeup/beauty so I read the Beauty Uniforms for the interviews only, but clothes I love!

Still coming back to this post for inspiration. Sarah’s style manages to be feminine without being diminutive or girly. She exudes a strength while remaining soft — all through her clothes and smile!

This series has become my favorite in your blog! Reminds me of old blogs, of the ‘next-door’ girls sharing what they were wearing unpretentiously. I miss those days!

Sarah, you are lovely and cool without trying too hard – and your little boy is GORGEOUS!

I love that she doesn’t wear a bra or make-up!

I love her style. It’s so effortless.

She is well and truly chic!

Could you do Beauty uniform with her, please? would love to read it :)

Great post Lexi! I love Sarah’s attitude, she is strong in her simplicity.
I think that all of us readers have great outfits too. Have you ever considered to do a sort of contest or something? So once a month you could write a style post “introducing” one of us.
Just a suggestion!

what a great idea, laura!!

I love her style! I would love to see what she wears when the weather turns cold. As others have said, maybe a series…

She looks stunning in all sets.

I am in love with her style i am a trouser lover too. I do not wear make up well lipstick maybe eyeliner on a special occasion but i cant say the same with a bra lol it would be nice to go out without one. Never ever will happen with these lol

Please make this a series, this is such good inspiration!

Yes, when I opened this one, I was hoping Week of Outfits was a new series! Would be so cool.

I love this post! Please please please make it a series. She has the best style, so chic and understated

I’ll cast another vote for this being a recurring thing! Love it!

The looks totally remind me of Audrey Hepburn, so cute
xo
http://www.laurajaneatelier.com

Wow! What an effortless beauty! Love her style!

Wow, she really nails it. I thought immediately of the original ‘Breathless.”

Can anyone give a source for that beautiful necklace she is wearing with the dress? It’s so pretty and simple!

Love this post! Her style is so chic but simple. Love it!

This series is great. I’m wondering if you could do a follow up with some of the women you’ve profiled in the past, but showing how they dress in the winter or other seasons? I’d love to see how their style adapts for the weather for ideas!