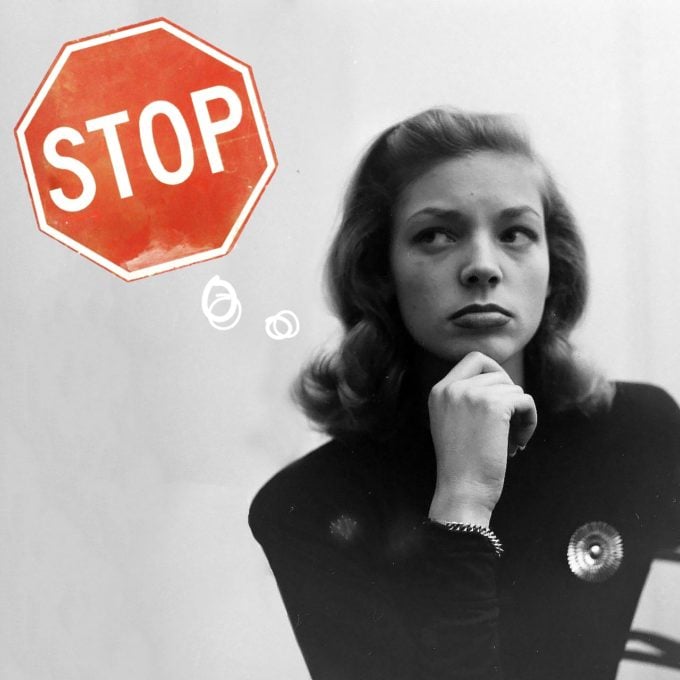 The other night, after climbing into bed, my mind started whirring. One of the boys had a situation that was worrying me, work was especially busy and generalized anxiety was doing its thing. Then I remembered something…

In my twenties, I had seen a therapist for a few months, and she was so, so wise. One of the many pieces of advice she had given me? When my thoughts started going in circles and obsessing, and those worst-case-scenarios were escalating, I should picture a big red stop sign in my mind. STOP!

So, I tried the trick, and it really helped. How simple yet genius is that? Somehow having a visual cue can jolt you out of your thought process. I’ve used it a dozen times since then, when trying to fall asleep or walking around town or whenever I need to just shut my damn brain off. I wanted to pass this along to anyone else who wants to try it!

Tags: anxiety
184 COMMENTS
WRITE A COMMENT
Relationships
most popular
01
Seeing My Body With Fresh Eyes
02
11 Wedding Dos and Don’ts
03
How to Write a Condolence Note
04
A Love Letter to My Anti-Anxiety Medication
05
How to Be a Better Listener
Subscribe
Login
184 Comments
Inline Feedbacks
View all comments
Katie

Joanna – Quick note to say the other night my thoughts were racing as I tried for sleep & I did your Grand Canyon trick, which I learned from your site years ago, and it helped SO MUCH. Thank you!

I do that, too. And I taught it to my friends. It really works! Thanks for the tip, Jo!

When my mind is racing before bed, it helps me to write it down & keep a notebook and pen close by.
And, like Kaitlin said, I’ve given my anxiety a name – “Eunice”. She’s a grumpy old lady whose always trying to hook me into worrying about something. When it gets too much I can say, “Enough Eunice! I’ve got this! Now, go to sleep!”

I’m definitely going to try this. I live alone in Paris while I write my thesis so I always have bouts of freaking out and racing thoughts.

This is such a great idea that I’ll use for sure next time I’m having trouble to stop my anxiety. I also like to keep track of every anxiety attack I have, to see if they have a pattern or are related to something else that might be going on.

This sounds so simple and trivial but it does absolutely work.

Such simple, but wonderful advice. Thank you for this reminder!

I went to a mindfulness workshop just last night & we learnt about STOP :

Look up the STOP practice X

This type of visualization is great. A therapist once also told me when I had irrational or simply unhelpful, anxious thoughts to imagine them like weeds, then imagine myself plucking them one by one and tossing them away. It’s always helped calm me.

Because it’s just a thought, it is not real, it simply doesn’t exist !

Thanks for talking about this. One trick my therapist gave me was to schedule a time to think about, and write down, whatever I’m anxious about. Like 4pm on Tuesday. It really helps during busy times when my general anxieties are floating around with actual tasks that need doing and decisions that need to be made, and I don’t feel like I can “turn off” my thoughts without something important slipping through the cracks. But if I don’t at least pause the thoughts, they interfere with work or sleep or having fun. And the writing it out helps because it becomes pretty clear which items (dripping sink, finish work memo) can be dealt with, and which (what if it rains on my outdoor wedding, what if someone I love gets sick) are out of your (and your obsessive thoughts’) control.

When my mind won’t stop spinning over a certain situation, my trick is to tell myself that I get one more time to run mentally through all the issues. Once I’ve completed that final time, that’s it. I’m not allowed to dwell on it anymore. If my mind tries to go back to it, I tell myself that it’s not allowed because that one last chance was used. Also, I learned from somewhere a few years ago to say a simple prayer asking God to give me traction to get out of the mental rut I’m in.

I definitely needed to read this today. I have a work problem that I won’t whether it will be solved for another ten days so I will be using this technique every night until then!

I have a wonderful anti anxiety tool my sister taught me. If we eat junk food all day every day, we feel awful. Similarly if we feed our minds a constant stream of negative morsels, we will feel awful. So here’s the tool: at night when you put your head on your pillow think of three things you did that day that made you laugh or feel happy, proud or positive. Such a simple, yet healing bedtime ritual.

I also struggle with anxiety and love your very real (and somehow for me, always timely) posts about it. I recently went to see a therapist for my anxiety. Her advice for the same situation: think to yourself, “it’s just a thought.” Seems so simple but it really helps. Xoxo

I would look at others who were laughing and smiling and wondered to myself, why would I be anxious when everyone else is having a good time? A bit of mind control works for me.

Just recently, I was very anxious for 2 wks in a new job, which resulted in vertigo spells and cold fingertips. Then I saw something on TV where this wise person was asked if they were anxious about winning, and she replied ‘Will worrying help?’ That’s when it dawned on me.

Being anxious for a job task won’t help the task be any easier or faster to resolve. Being anxious before a flight will not affect the pilot’s judgement, or improve the weather fluctuations. This was a revelation for the practical me. It’s no use getting anxious, the situation or problem is out of our hands usually. Just deal with it as it comes. And the generalized anxiety went down.

You need to read the book my mom wrote! She is a therapist and wrote an entire book using the mental image of a stoplight. It’s called “Stop Breathe Believe.”

It’s a combination of mindfulness, cognitive-behavioral therapy, and utilizing breathing techniques. Highly recommend though I am a biased proud daughter.

ha, I have a similar technique when my (night time) mind is buzzing with imagined worse case scenarios and general stress/problems and so on. I imagine all the thoughts in a room (in my brain I guess) and I slam the door closed on them. Sort of closing them off. Then I tell myself to leave them alone and not open the door. It actually helps.

I deal with anxiety everyday (both outright fear and general worry) and used to binge eat to take the edge off, but 6 years ago I began a 12 step program that changed everything. There I learned something very similar to STOP and that is that I can’t think my way out of anxiety. However, I’ve found that writing and taking action always works. If I catch myself ruminating, I try to pause (or get up out of bed if it’s in the middle of the night) and write out what’s on my mind. Once I have what I’m future tripping about on paper and am essentially looking at it head on, I do a little meditation acknowledging that I’m not in control and that I’m going to act as if something greater than myself (what they call a “higher power” in the 12 step program) has totally got this. I “act as if” by doing the next right thing (taking the next step whether it be something mundane like doing the dishes or something more directly related to what I’m worrying about) and letting the end result unfold.
I’ve found that the combination of surrendering the big picture and showing up 100% for what is right in front of me has made all the difference. I will probably always deal with anxiety but I’m so grateful to be moving forward in spite of it and have gained an incredible sense of mastery knowing that I’m doing what’s within my power and that is enough.

Ha! Who would’ve thought it would be that simple. I’m going to give this one a go next time and see what happens :)

Thank you! I needed this now! I come to your site when im feeling anxious. Reading random things helps me; but today i really needed firm advice.
Thank you

I’ve never heard of this technique but I’m going to try it. My anxiety usually hits late at night, too. My best technique to combat it is to make a gratitude list in my head of ten things I’m grateful for that happened that day. It’s so calming and really keeps my perspective in check. I’m usually asleep before I’ve reached ten things!

YES! I was so surprised when this actually worked for me. I thought my anxiety was super special and resistant to simple fixes (don’t we all?) but the good ol’ stop sign is actually an enormous help.

A similar trick that I use, particularly useful for children (and children at heart), is to give your anxiety a name and then tell it that is should go away. I try to visual my anxiety (his name is Alexander…like Alexander and the Terribly Horrible, No Good, Very Bad Day) walking away and closing the door behind it.

It’s interesting how we all have different tricks that work for us, many of which are quite similar. <3

Thank you for talking about anxiety! It’s something I struggle to talk about with my friends because it feels so personal and scary, but it’s something I feel we should be more open about so that we can normalize it and de-stigmatize. It feels nice to know there are so many others that are in the same boat. Thanks so much for making anxiety part of the conversation!