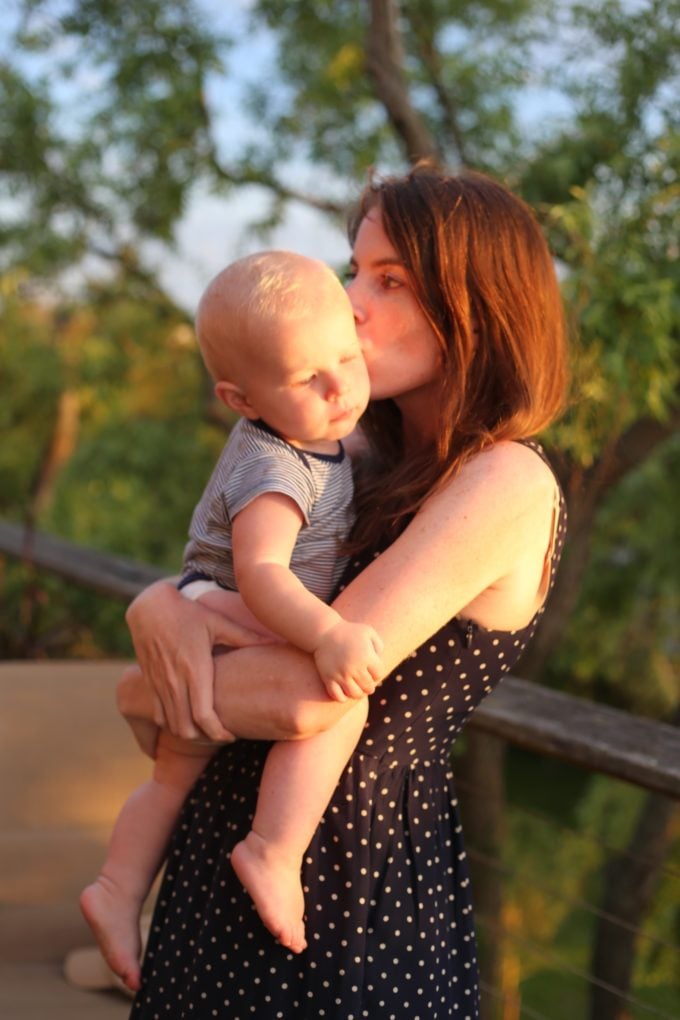 Toby and Anton have a book called Zen Shorts, which features a wise panda teaching kids life lessons. The first time I read it, I was sitting on the floor reading to the boys, and one part of the book really jumped out at me. Ever since then, I haven’t been able stop thinking about it…

Two traveling monks reached a town where there was a young woman waiting to step out of her sedan chair. The rains had made deep puddles and she couldn’t step across without spoiling her silken robes. She stood there, looking very cross and impatient. She was scolding her attendants. They had nowhere to place the packages they held for her, so they couldn’t help her across the puddle.

The younger monk noticed the woman, said nothing, and walked by. The older monk quickly picked her up and put her on his back, transported her across the water, and put her down on the other side. She didn’t thank the older monk; she just shoved him out of the way and departed.

As they continued on their way, the young monk was brooding and preoccupied. After several hours, unable to hold his silence, he spoke out. “That woman back there was very selfish and rude, but you picked her up on your back and carried her! Then, she didn’t even thank you!”

“I set the woman down hours ago,” the older monk replied. “Why are you still carrying her?”

How beautiful is that? Apparently it’s an ancient zen parable. And it’s true: When you’re mulling something over (a rude driver, an argument with your partner, a terse comment from a neighbor), you’re choosing to spend your time feeling upset. Those feelings could just disappear, if you let them. It’s such a good reminder that the narrative in your head is really important to your own well-being, and it’s something that I hope my children can learn — and myself, too!

This week, I saw that The New York Times had also mentioned it, and I wanted to share it.

Another thing that helps grudges disappear: My friend Gemma always says people are “grouchy,” which made me laugh. It makes people seem sort of hilariously cantankerous and keeps you from taking it personally (which 99% of the time, it isn’t!).

Zen Shorts is now my go-to gift for kids — probably best for ages 5 and up — but it’s a good book for adults, too. (My sister has a copy on her own bookshelf.) 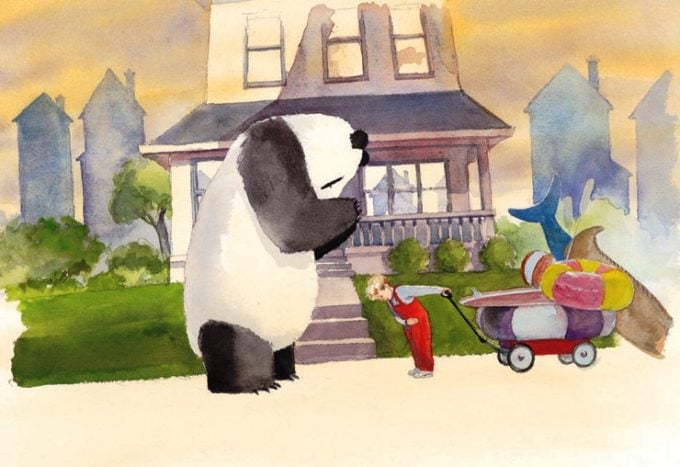 What will you let go?

P.S. How everyone is really just a baby, and this made me laugh.

Puppy Too Small is a great book for really young children. I loved reading it to my boys (now 34 and 32) with an exaggerated whiny voice for “Puppy.”

I’ve referred this book to a number of adults and read it to a number of children. The kids LOVE to compare it to their own life–as they do with most stories. Such a gem. Can’t believe I’ve never bought it for myself or gifted it to anyone. I’ve given many recommendations! Thanks for highlighting this wonderful title.

This really has opened my eyes knowing that sometimes we keep things bottled up in us yet we would let go and feel better its wise and will share with my kids to let go of any thing that can upset your mind.

This is literally what I needed to read! I’ve been holding on to so much…Thank you for sharing.

It’s beautiful. I would like to say that I’ve succeeded in life if i’m able to love others and let go of myself.

I sent this post to my husband who has been carrying a bad attitude for a few days now, he read it and texted me back “I am putting my attitude down now”. His mood has noticeably improved! Sometimes we just need to be reminded to get over ourselves to really appreciate what is right in front of us. thank you for sharing this!

Can’t believe I just came across this post- last night I began a new semester in school with a course in Children’s Literature and out of the 30-something books being passed around the class for presentation, I chose this one to discuss with the group! It was the story of the two monk’s that I found most compelling and decided to read aloud. Really powerful stuff. Love that you love it, too! Might need to get myself a copy…

Lovely post and I will seek out that book for my grand daughters.
It reminds me of a saying -not sure of the source- that to stay angry with someone is like drinking poison and expecting the other person to die! -the only one hurt is ourselves

Is the illustration at the bottom from the book? It is beautiful!

yes! it’s so beautiful. it actually won a caldecott honor!

A conversation at our breakfast table last week prompted me to introduce my 13 year old stepdaughter to this parable (koan) and several others (“A Cup of Tea” for instance) through the book “Zen Flesh, Zen Bones”. I’ve had my copy since the mid-70s (college).

Amazing Story, Babies are always the light of life. Thank You for Posting.

As a person who tends to Cary things around, this parable hit home!

I’ve never heard about this book before, but I really love this parables!

love this book, for years. The farmer’s luck parable is the most impactful for me and might really have helped me be a better person! It’s my go to gift for new parents.

I would love to see a book for adults written and illustrated like a children’s book to explain different scenarios where this zen parable would apply and when you should say “F*** you, I will not abide, be accountable/own/apologize for your actions.” My mom could probably physically describe every single person down to the type of shoes/make&model of car who has EVER cut her in line or snaked her parking spot, but when it comes to important emotional/physical/financial needs in her life, she goes into doormat mode, or convinces herself that she’s taking the “higher road” when really it’s just the easier road because she’s scared to stand up for herself. Sometimes I feel like that rubbed off on me. Ugh. Still, thank you for this post though. It really helps.

Thank you for this! I was exactly the inspiration I needed today after a rough day at work.

I needed to hear this today after the longest, last day at my job with a crazy boss. Practicing ‘setting her down’ so I can enjoy dinner with my lovely husband. This blog warms my heart and reminds me what’s important in life :-) Thank you!

This really happened to me with our neighbors, and I appreciate that that was in your little list of examples. First of all, I’m realizing that there are probably little personality quirks and the fleeting elevator moments don’t mean anything personal. But oh my goodness they’ve literally made me cry. This is such a beautiful picture of what not letting go is doing to yourself. (I’m pretty much over that particular situation but my heart rate goes up when I see them still!)

This is such a beautiful parable!!! I love stories like this that teach such an awesome lesson. I added the book to my Amazon list! Always appreciate finding good ones!

I love this post!! Here are other books my kids loved being read to… http://veenamrutha.blogspot.in/2016/01/books-my-3-year-old-enjoyed-being-read.html?m=1

My 4,5 year old loves that book!We have the book with a greek translation and the pandas name is Galinios which means tranguil,peaceful in greek!

Have that book and loved it! My son is four and he goes “mic drop” after I read that line :)

I love this story and I usually read it towards the middle of the school year. Its a great book. I needed this reminder today and I am letting things go.

I remember this story from college. It has always stayed with me. Although, in the version we studied, it was more about the fact that monks aren’t allowed to touch women, and so the other monk was upset because he “broke the rules.” It was told to us to remind us that sometimes we need to honor the “spirit” of the law, instead of the law itself. It is better, in my opinion, to help someone and break a rule, than leave them there to suffer. In our version the woman was kind, but the other monk was upset because the young monk broke the rules. It’s a story I use often when dealing with trying to get religious people to see a different side of things, and often times, it works ha ha! Zen Stories are fabulous. I recommend you read the story “Trading Dialogue for Lodging” It’s a great story about not looking inward, about not being self involved and thinking that the whole world revolves around you.

Emilia, are you referring to “Zen Flesh, Zen Bones”? One of my all-time favorite books. Wealth of wisdom in a tiny volume.

This is exactly what I needed to read today! thank you

I don’t have kids yet but im thinking about getting that book ?