11 Pressing Questions for an Ob-Gyn 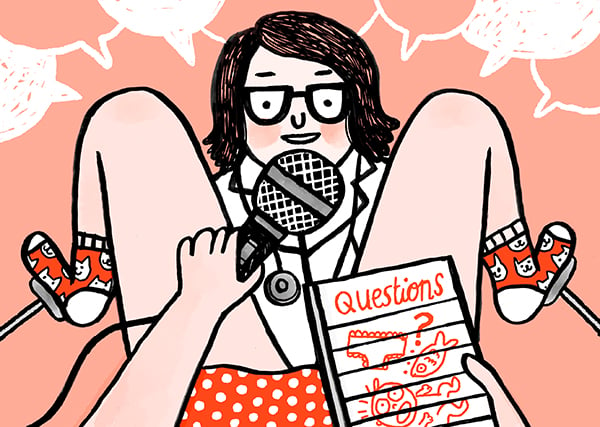 Abigail Ford Winkel is a general obstetrician-gynecologist in New York City, who handles everything from routine office visits to delivering babies. Here, she tells us what we want to know, including the best kind of underwear, funny smells and lightning-fast births…

First off, do you ever get grossed out?
A good thing to remember is the doctor is never squeamish; it’s usually the patient that finds things shocking. There’s a lot of blood during deliveries, and there are uncomfortable smells. But it’s such a routine part of the work that I don’t even think about it.

Do patients ever get nervous about things they’re experiencing that are totally normal?
Earlier this week I had a patient come in and say, “You’re going to fall off your seat when I tell you this.” And I was like, “I’m sure I’ve heard it before.” Sure enough, she got a tampon stuck and couldn’t find it. Rule of thumb: If it’s happened to you, it’s happened to somebody else before.

How are you supposed to wash yourself?
Water, actually. I’d say the best thing is to soak in a tub of water with nothing in it. The vagina is a self-cleaning oven; you can let it take care of itself. Also, keep in mind, some variety in odor is to be expected, because there is a combination of different bacteria and yeast living down there. Your diet, your clothes and other exposures can change it. If you’re not feeling uncomfortable, it’s very likely fine.

What should a woman know before coming to her appointment?
It’s important to know that your gynecologist is not your priest or a police officer. No one is judging you. The more honest you are, the better. As much as possible, you should divorce the emotion from your reproductive health. Also, everyone — even married people and those in monogamous relationships — should get tested for STDs. It should be like brushing your teeth. I get tested every single year.

Are there certain questions you always ask patients?
I have a standard script — I’ll ask even a 75-year-old grandmother, “Do you smoke, do you drink, do you do other drugs? Pot, cocaine, heroin?” Like I’m asking her if she shops for tomatoes. But you have to get into sex, drugs and rock and roll in these conversations. If the doctor feels comfortable asking, the patient will hopefully feel comfortable answering. We want to help you, without bringing in any outside-world judgement. It’s true of depression, too — even if you look happy at your postpartum visit, I’m going to be asking you about depression.

What’s the best type of underwear?
Cotton underwear is going to help things breathe. There is a lot of bacteria down there, and if you seal it like a jar, it can make some of those naturally-occurring problems worse. Is synthetic underwear toxic? No. But I would say, unless you wear cotton underwear, don’t sleep in it.

Is there a “best way” to alleviate cramps?
Of all the over-the-counter painkillers, ibuprofen is the most effective for dealing with menstrual cramps, since it’s both a pain reliever and an anti-inflammatory. Sometimes if you start taking it before your period comes, it can have a better effect. You don’t want to wait until the pain is at its maximum. A lot of people also see relief from cramps on birth control pills.

What’s your vibe during a typical birth?
During pushing, the mom is like the rower, and I feel like the coxswain. “Go go go! Row row row!” As the ob-gyn, I’m like, we’re going to get you where you want to go, I’m just steering a little bit. It’s a fun place to be. I never even notice if it’s a boy or girl, that’s the last thing on my mind. I’m just obsessed with having everything go smoothly. Is the baby screaming? Is the mom feeling good?

Have you ever had a patient give birth in a cab? Our friend almost did!
I haven’t had any cab deliveries yet, but many people have gotten to the hospital seconds before their babies came. Usually, there’s a loud, chaotic scene between the patient in the throes of labor, the partner trying to help, and the nurses panicking that the patient is going to deliver in the hallway. One delivery I remember particularly well was when a woman was brought into the E.R. labor unit on a wheelchair. She was glorious with an African head scarf and a long, flowing dress. She wasn’t making any noise, or even grimacing, but she was snapping her fingers. I asked what was going on. She looked me in the eye and said only, “Baby coming.” She kept snapping her fingers in rhythm with what was going on with her body. As the nurse and I helped her move onto the bed, we realized she wasn’t kidding. The head was starting to crown. The baby delivered moments later. She took the wriggling, gorgeous messy bundle of a baby into her arms, and looked at me with that stoic expression finally melting into a broad, beautiful grin that I will never forget.

As a mother of two, did you feel especially prepared for your own children’s births?
With my first baby, I went to the hospital on the eve of the royal wedding. It was the perfect thing to watch during labor! I chugged along laboring overnight. Then, everything changed when I saw my baby’s heart rate drop dangerously low. My nurse noticed it, too, and went to get an oxygen mask for me. I transformed from patient into obstetrician mode, and started handing out orders around the room. I asked the nurse to get the doctor, my colleague to get a pair of gloves to examine me, and my husband to move me onto my hands and knees. My husband’s eyes widened but he did as directed. My daughter was born at about 5 a.m., just as William and Kate tied the knot.

What’s the one thing you’d like women to do that would help keep them healthy?
I don’t think people necessarily believe that stress has an outcome on their bodies. They think, “If it’s in my head, it’s just torturing me.” But stress isn’t good for the immune system. If we could re-frame self care as, “I am creating a healthy environment for my body” — which is also a place to nurture a baby — we might feel more comfortable and less guilty about taking care of ourselves.

Thank you so much, Dr. Winkel!

P.S. Ten lessons I’ve learned in my career, and what no one tells you about having a miscarriage.

(Illustration by Gemma Correll for Cup of Jo. Interview by Caroline Donofrio.)

Thanks for answering these questions that a lot of us have been wondering. It’s good to know that the more honest you are with your gynecologist, the better results you can get. Sometimes, just being prepared to be honest can be difficult, but it seems like it is worth it. After all, who better to trust than a professional.

I really like what you said about being 100% honest with your OBGYN. The only way you can have questions answered, is if you ask them! It’s also good to know that it’s best to be tested every single year, so that you know about, and can take care of any STD’s. Thank you so much for sharing, it really opened my eyes on how important seeing an OBGYN is on a regular basis.

Indeed, the doctor has seen this so many times, that they don’t really notice something as gross. If a OBGYN can’t stand the sight of blood, they are probably in the wrong profession. That, or they just have seen enough to get used to it yet.

I’m getting married and need to find a gynecologist to check me out. Thanks for the advice about how the gynecologist will not judge you and that it’s best, to be honest with them. Hopefully, I get a good gynecologist that I’m comfortable with.

like this! great post. One thing I wonder is what a OBGYN’s opinion is on the issue of intimate shaving/waxing/general hair removal. This is a big discussion over here in Norway where many are against intimate hair removal…any idea on what she thinks on this? Maybe a future post idea- ‘care, down there’. ??

I am an OBGYN and wish most would leave it alone or just trim. I could save insurance companies millions on visits for infected hair follicles and ingrown hairs which most are worried is herpes. Trim if you must but the shaving/waxing is only a breeding ground for infection.

I basically suggest trimming, too. Shaving definitely risks those infected follicles that have brought more than a few women to the hospital with bad infections. You can exfoliate with a loofah which helps a bit to avoid ingrown hairs, but nothing’s perfect.

this was amazing haha. i love the honest answers, as this is something a lot of people tiptoe around or feel awkward around!

I love this interview so, so much! I’m the social media administrator for a very busy Ob-Gyn department in a teaching hospital. Would you mind if we shared this on our FB page?

of course, we’d be honored!

Loved this post so much… please do more interviews like this! I agree with another commenter about a wide range of careers…I’d love to read about a baker’s every-day, for instance!

As a busy resident in a university teaching hospital I love this post! So much rings true :) Rules of thumb when visiting any physician:
– the more honest you are, the easier it is for us to provide you with the appropriate medical care that you need.
– this is our day job, nothing’s awkward or uncomfortable to us! :) We’ve seen it all & more. But we appreciate that as a patient this might be a new , difficult situation for you, and we will provide any reassurance or answer any questions that you may have.
– bring anything with you that may help us with your care : list of prescriptions, prior medical records, medical equipment that you use at home etc…
Always love reading your blog Joanna! -xo