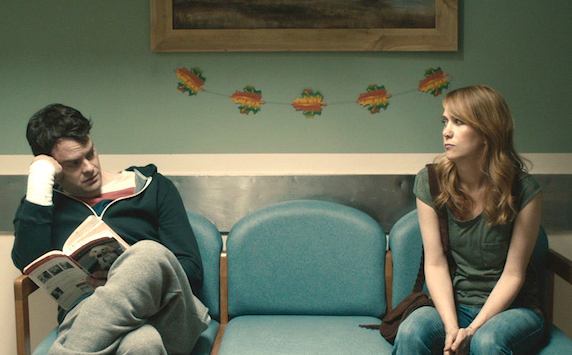 Have you guys seen the trailer for Skeleton Twins? Kristen Wiig and Bill Hader play estranged siblings who are forced to spend time together after an unexpected tragedy. The film won the Waldo Salt Screenwriting Award at Sundance and looks dark and hilarious.

Last night I went down a rabbit hole and read a bunch of interviews about the movie, and here are two fun quotes for you:

Writer/director Craig Johnson: “[Wiig and Hader] are like brother and sister. I just stood in the corner, silent and in awe of these two people when they would just riff back and forth. They would be on set in between takes just going off on bits that were completely improvised, but were just so funny and so quick. It was like they had a shorthand, secret telepathic language with each other. They know each other’s brains so well.”

The New York Times: “Weren’t you once fired from a movie theater for spoiling the end of Titanic?”

Bill Hader: “I was tearing tickets for a movie theater in Tempe, Arizona, and this sorority had rented out the whole theater and they were being so rude to me. I was like: ‘The boat sinks, Leo dies at the end. You think he’s sleeping, but he’s frozen. And the old lady is Kate Winslet. Enjoy the movie.’ ”

Thoughts? Will you see it? Mark your calendars: It comes out this Friday, September 12th.

Tags: videos
40 COMMENTS
WRITE A COMMENT
Design
most popular
01
My Sister’s Home Makeover
02
What Are Your Top Three Books?
03
The Ultimate TV Guide (If You’re Looking for Something Great)
04
Catherine Newman’s House Is a Joyful Jumble of Books, Games and Cats
05
Behind the Scenes: Making a Magazine Cover
May We Suggest…
By Joanna Goddard
Design
Who’s Your Celebrity Crush?
March 4, 2020

Good Movie .. Movie Graphics is very high quality.. like this.
Thanks

With only one application you can download movies, videos, music, …. GREAT but having some minor issues Sometimes search which is so helpful
I have created a new site by the end you can safely movie download.
movie download

Thank you for sharing, this looks fabulous! Have you seen the puppet skit from SNL with Bill Hader? He’s the best http://vimeo.com/83795116

Absolutely go see this movie! It is real, touching, grounded and hilarious. A breath of fresh air in a movie for sure!

It looks fantastic! What a great cast! I cannot wait to see it. Thanks for the tip.

I hope this movie comes to Italy for the completely unrelated reason that my little boy shares the same name as the main character! Gotta love Milo!

Loved the trailer and can’t wait to see it – I love all brother and sister stories: rachel getting married was amazing and the family stone too. I even watched brother’s and sister’s, and we all know how soapy that was.

On a funny note: I was talking about crushes to my younger sister the other day and remembered a wildly embarrassing celebrity crush she used to have. I looked at me in total shock and uttered “I was so sure NOBODY knew about that… You’re no longer invited to my wedding.”

Yeah.. siblings are the best.

Reply
Somebody from Somewhere

Darn it hate when my comment doesn’t go through and I gotta remember what I said….

PSSSS I was feeling the same way about 4-0, but the further away from my twenties the better I feel!! Sorry young thangs, but LIFE gets even better!

Thanks for sharing-looks SO good! And I’d never heard of it!

Sometimes I think this blog, or you?, are my best friend. Sometimes things just click and CoJ and me click. Thanks.

jill, that’s so funny! do you know rob meyer too? he is friends with adam and craig—although i didn’t realize his friend craig was the same as the director of this movie until rob emailed me a couple hours ago. small world around!!

Ack! Craig Johnson is a close friend and this post totally freaked me out to see his name in a place that I don’t associate with him. Maybe he really is making it big! :) Side note: the movie is GREAT.

The minute I see two people spontaneously break out into song as part of a cute friendship montage… I’m out.

I can’t wait to see this one! When they start singing…die!

Sounds like either a “I love it” or “I hate it” movie! Will see! I love movies too.

What an amazing cast!!! Ahhhh!!! I’m seriously so excited for this!

The Savages with Laura Linney and Philip Seymour Hoffman is a similar movie.

Reply
Jana | One Drawing A Day

Two of my faves from SNL and hope to see this. Hadn’t heard of it before – thanks for sharing!

PS- agreed about the turning 40 thing. I turn 30 next year and seeing cool chicks like Tina and Amy killing it makes me feel like I’m just getting started!