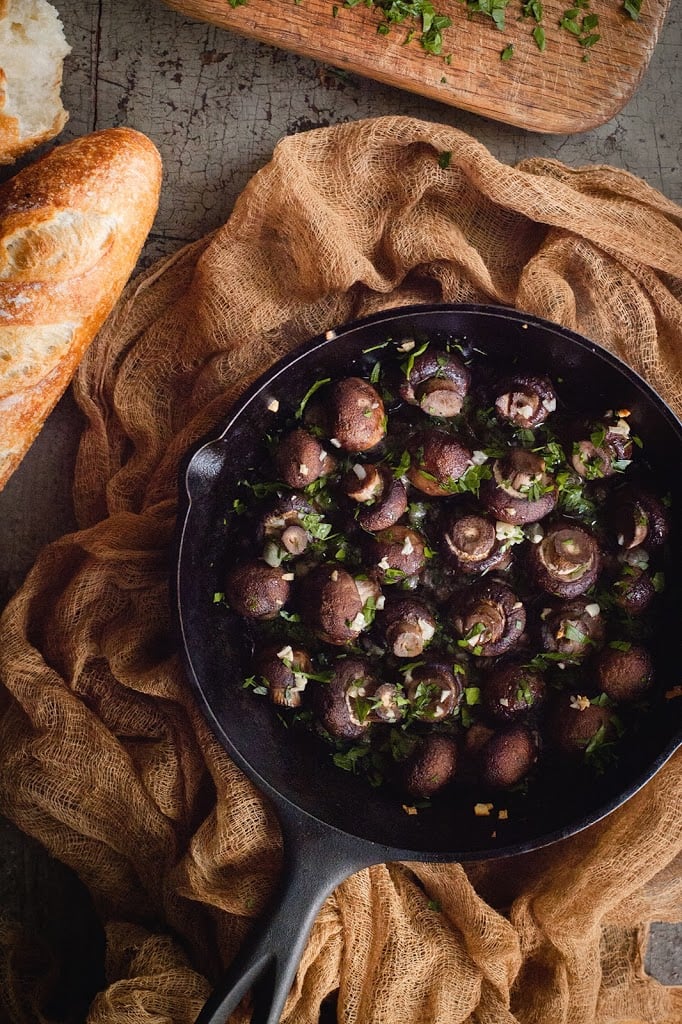 This month, we’ve been asking food bloggers what they make for dinner when they’re home alone. Today, Carey of Reclaiming Provincial shares these delicious garlicky buttery roasted mushrooms. Can’t you imagine drinking wine and mopping them up from the pan with a piece of bread? Here goes… 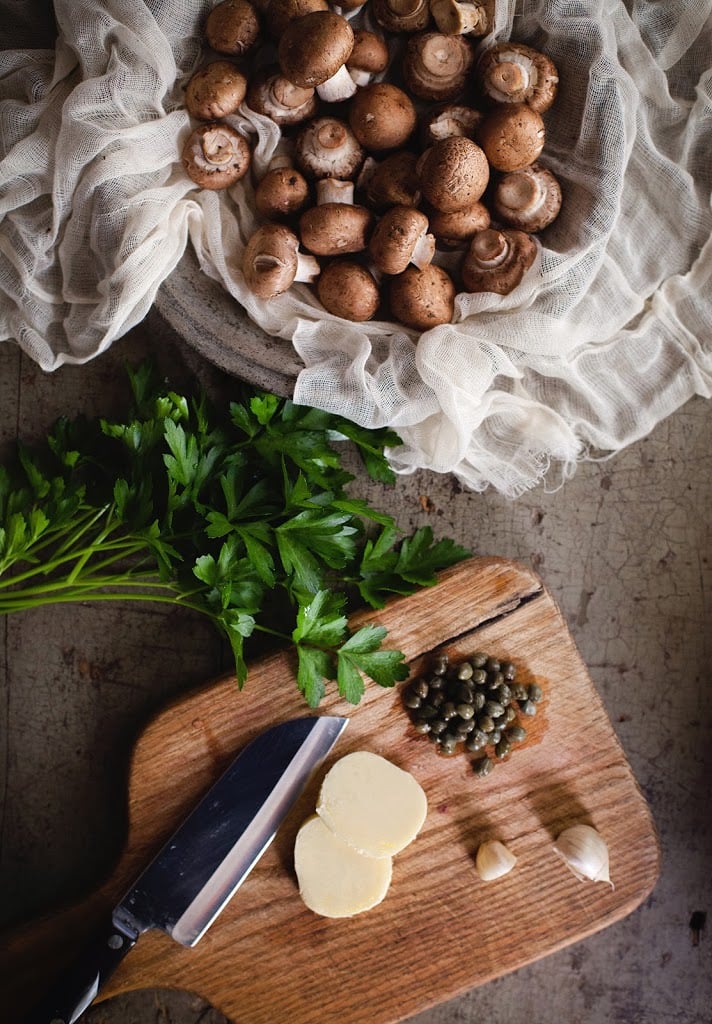 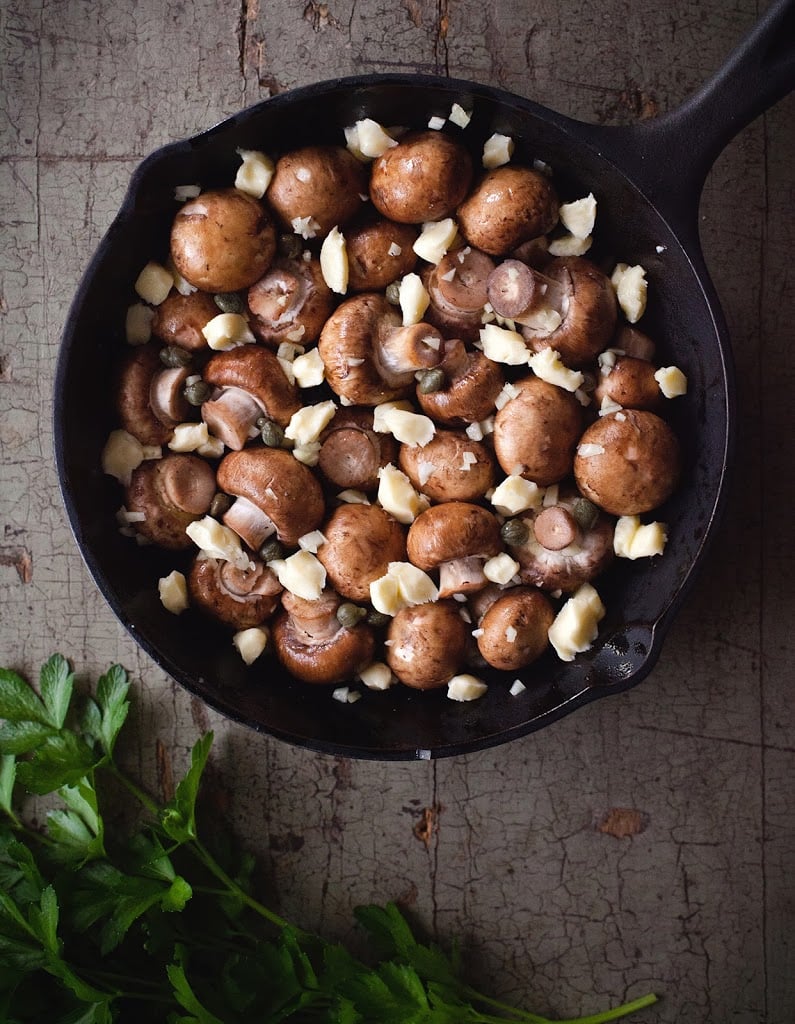 I thoroughly enjoy cooking for others. I live for potlucks, dinner parties with close friends, and holidays hosted in my tiny apartment. That being said, I revel in dining alone. There’s no need for showy dishes or anyone else’s food preferences or dietary restrictions to consider. Just the question, what do I want to eat? Truthfully, sometimes the answer to that question is a giant bowl of popcorn with a side of cookies. But on my finer days, it’s something nourishing, delicious and simple. Big emphasis on that last part, because—as those who suffer from perpetual bouts of “hangriness” know—the less time between the thought “food?” and the actual appearance of food, the better.

My favorite bachelorette dinners almost always involve a skillet or tray of roasted vegetables and a generous helping of bread and butter. These roasted mushrooms (discovered via Deb) make an appearance time and time again. They’re ridiculously good and simple to prepare, with minimal prep work followed by only fifteen-ish minutes of oven time. The original recipe is intended to serve four as an appetizer, but halving it makes for a perfectly satisfying and respectable solo dinner.

What to do:
Preheat your oven to 450°. Toss mushrooms with the oil, capers, garlic, pepper, and salt in a baking dish or cast iron skillet. Dot with butter cubes and roast for 15–20 minutes, stirring once or twice as they bake.

Once the mushrooms are tender, remove them from the oven and stir in the lemon juice and parsley. Eat them straight from the skillet with plenty of crusty bread to soak up all the garlicky butter. 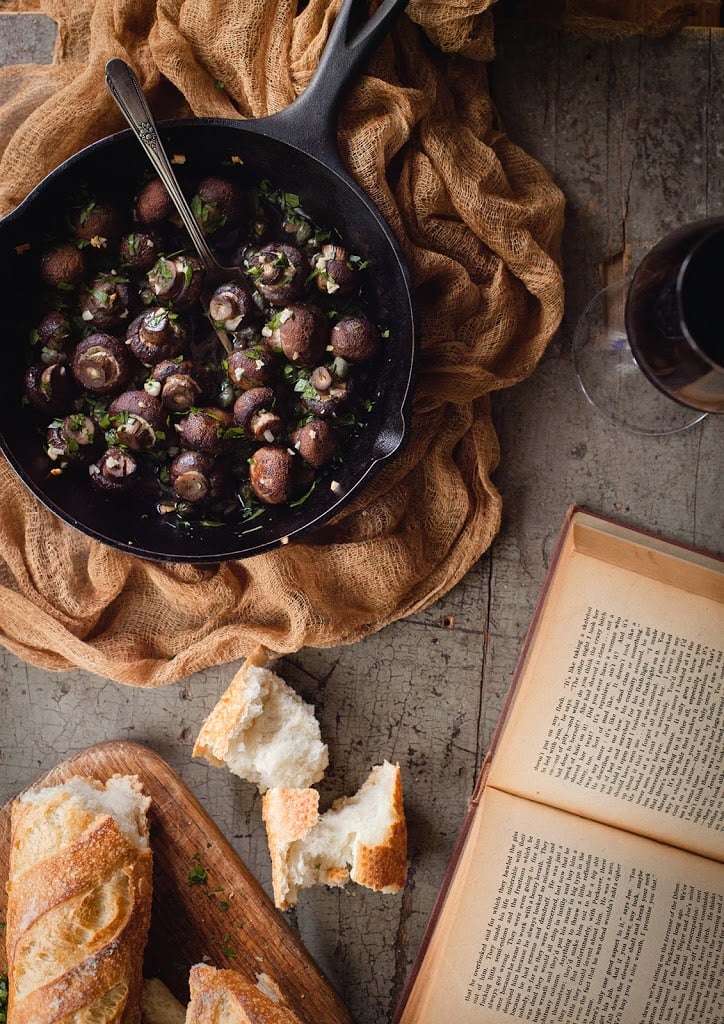 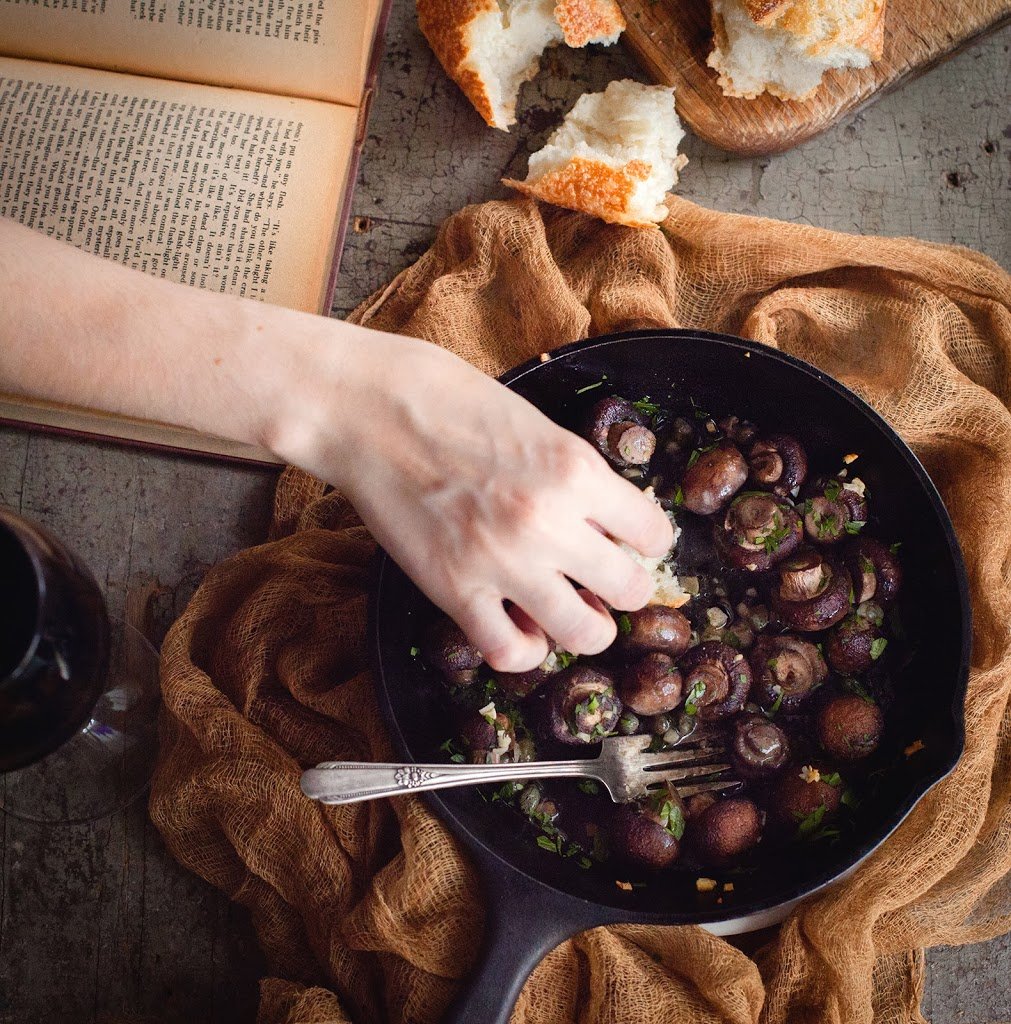 Thank you so much, Carey!

(Photos by Carey Nershi of Reclaiming Provincial. Original recipe by Kay Chun for Gourmet, via Smitten Kitchen. Thanks to Shoko for helping with this series.)

I just made this toasty meal on the first cold night we’ve had, and it’s perfect! Such a yummy excuse to eat lots of bread.

This recipe just about made me faint when I tried it! It’s so surreal that it’s so easy but soooo delicious. I had to write about it on my own blog.

Thanks for the wonderful recipe!

This recipe just about made me faint. It is almost surreal how easy yet delicious it is! I just had to write about it on my blog too… http://www.thatdistantafternoon.com/2013/11/roast-mushroom-simplicity.html

Thank you for the recipe!

I just made this on served it on top of polenta for dinner. It was delicious – even my Italian husband approved! Thanks for sharing.

Roasted mushrooms are one of my absolute favorite things, and this recipe sounds divine! Carey, your photos and writing are gorgeous, as always. Congrats on the guest post! :)

These look just gorgeous! I adore mushrooms but my partner isn’t so keen.
I’ll have to make them as a side for myself.

oh yummm, this looks so good! i have to make these next week.
xo, cheyenne

Made these last night, and wow… crusty bread, lots of lemon, and a glass (or three) of Malbec. So very, very delicious!!

What is with solo dinners involving popcorn??? I noticed it in the comments of the previous solo dinner post as well. I don’t hate popcorn, but I haven’t had a craving for it since elementary school when I thought it was the most magical thing ever.

Love this recipe, I making it this weekend for girls night in!

I made these along side a couple of steaks and crusty bread for supper last night! Yummm! Thanks!

These look so good, perfect for a home-alone meal

This recipe looks amazing. I will have to give it a try. Thanks for posting.

Ooh, I am making this tonight… with chanterelles!

Such a bad post to read while I’m alone, and hungry! (I have another 3 hours until Hubs is home for dinner!)
….But still a good post. Will probably use this recipe :)

This looks delicious and much more healthy than my typical dinners for one!

Holy mother, this looks outrageous! I will absolutely be making this for myself this week, with a glass of wine and a side of 30 Rock. Deeeelicious.

Sounds like the most perfect solo dinner! Heartwarming, and I can already imagine how great a loaf of French bread would go with this. Thanks for the recipe!

You know, we (your loyal followers) know a lot about you, and you don’t know much about us, BUT, you DO know what we’re all making for dinner tonight, ha ha! Thanks for this recipe, I’m off to the market now…

Joanna, Thank you for being so reliable, and posting awesome or mostly awesome content every day. These mushrooms look beyond delish! Thank you for your professional, creative and hearteningly steadfast blogging. xxoo ♥

This sounds amazing! Thanks for sharing! These meals you have been gathering up have been positively inspiring.

Holy smokes! YUM! I think the only time I love mushrooms is when they are smothered in olive oil and garlic. Thanks for sharing!!