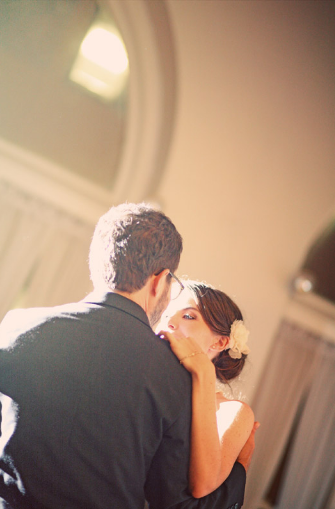 Alex is definitely nicer than I am. Here’s why…

Yesterday was our third anniversary. Three years!!! It feels longer, but in a good way. So much has happened!

Over these years, I’ve learned a few things things about marriage (and, of course, am still learning). Be a united front to your children. Say thank you. You’re allowed to get annoyed. Kiss each other in the kitchen.

But Alex, who is older and wiser, does something really great. If we’re in an argument, he says, “I love you” right in the middle. It’s amazing.

Here’s what he told me this morning: “The secret to a long and happy marriage is not the idea that nothing bad is ever going to happen. But it’s that when something bad happens, you know how to get through it together. One of the most important things is that when you’re having an argument, instead of ratcheting up the emotion, you diffuse it. In the middle of a fight, say, “I love you; you’re the most important person in the world to me,” even if at that moment, those words are the hardest ones to choke out because you’re so mad. It reminds you both of the big picture. It doesn’t make it instantly better, but it takes it down a notch. And in the cool-down period afterward, you’re not left questioning. You know everything is going to be ok. Half an hour after the fight, it’s over and you feel good.”

Great idea, right? I cannot tell you what a difference it makes. I’m still too hotheaded to do it myself, but I’m so glad he does. :)

Also, have you ever read this Huffington Post article about 15 marriage secrets? It’s fantastic, funny and enlightening.

What little secrets and tips do you have for relationships? Do you fight fair? I’d love to hear…xoxo

(Photo of our wedding by Max Wanger)

Tags: alex, marriage, personal, secrets to a happy marriage
148 COMMENTS
WRITE A COMMENT
Relationships
most popular
01
Seeing My Body With Fresh Eyes
02
11 Wedding Dos and Don’ts
03
How to Write a Condolence Note
04
A Love Letter to My Anti-Anxiety Medication
05
How to Be a Better Listener
May We Suggest…
By Joanna Goddard
Relationships
The Very First Emails Alex and I Sent to Each Other (We Were Nervous!)
September 1, 2020

Thanks for sharing the excellent post with us. Keep on updating us regularly.

Anniversary invitation cards are not any different from the usual cards, unless you want to customize the stuff, your guests won’t even know what surprise you have planned. Of course the address would let them on to your little secret but apart from them there is no way of telling.

That’s some truly great advice and I think a lot of marriages would survive if everyone followed it! Congrats on your 3rd anniversary and if you’re looking for the perfect gift for any future anniversaries, you may want to take a look at MyDayRegistry.com ;)

My husband has been married a couple of times before. I had been in a bad relationship before. One evening I looked at him and said we needed to talk. Led him out to the deck. He was scared to death. LOL I started talking (not yelling) about something I didn’t like that he did and we worked out a resolution. Then I asked if there was anything on his mind that he didn’t like about what I was doing. He said no at first and I said bull. He was shocked that we really did talk. I told him that it didn’t solve anything to yell and scream.
On the 27th, we will have been married 3 years. Happily, yay!

I constantly emailed this site post page to all my friends, because if prefer to read it then my all friends will too. royal dar al eiman Makkah

congratulations guys, quality information you have given!!!

It feels good to feature much enlightening and unique articles on your websites.free fitness videos

Many thanks! For sharing such type of blogs. That’s a great help of me. Hope you must keep on updating the latest posts… resume templates

The people are very lucky to have this blog because it has better knowledge. 4g android phones

Hi, just desired to let you know, I enjoyed this blog post. It had been funny. Carry on posting!
source

Having seen your blogs, I really enjoyed going through them.
Learn About it

congratulations guys, quality information you have given!!!
wedding invitations company

Thank you so much for such a great blog.
click this link

Anniversary is the most important day & always couple wants to do something unique. They want to buy unique gift for their loved ones..Anniversary Gifts

A marriage, relationship stand on love, trust, felling and understanding. You have all so you are going on your love/life journey. anniversary favors

I’m truly suffering from the design and framework of your web page. It’s a very easy on the vision which makes it much more enjoyable for me to come here and examine out more often. Did you use out a developer to create your theme? Excellent work!Removalists Melbourne:Move My Stuff

Really great to read. You are so lucky to have such a wonderful husband, of course he is the luckiest husband, as he got a constant learning wife.
Normally women never learn Not offensive. just a fact. :)

Happy Anniversay wishes to you

That’s great, my hubs does that exact same thing but not when we’re fighting, instead just when I’m annoying him. It’s a gentle way to say, please stop doing that. Also, he and I have had a few fighting rules since the beginning of our marriage that I think have really kept us out of trouble 1)no storming out before we have resolved things/have decided to agree to disagree 2)No name calling and keep cursing to minimum, and 3)never threaten to leave the relationship.

Wow, I just tried this the other night and it soo worked! It definitely helped the after-fight uneasiness that occurs too! Thank you!

Wonderful advice! :) Happy anniversary to you both!!

That is a wonderful idea! Right before we got married, a candid friend of ours told us her best marriage advice: she & her husband have a rule that they have to fight…naked. (It usually ends any argument quickly!)

Ever since then, whenever my husband & I start to bicker, one of us will say “wanna fight about it?” in reference to our friend’s advice. It has saved us from so many silly arguments & given us something to laugh about years later.

I totally did this today while we were just bickering (also, i’m SO stubborn and i was incredibly tired and pissed at him and i can’t believe I actually bit the bullet and said it) and the crap just melted away! Best advice ever!