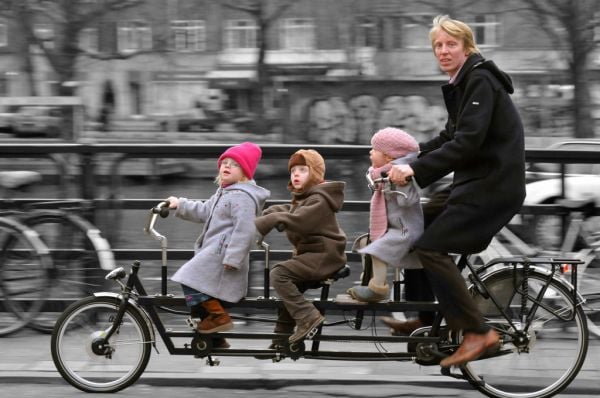 Amsterdam photos later this week, but in the meantime, want to see some crazy photos of bikes in Amsterdam?

When turning, people would just put one hand casually down on that side, or point to the ground to the left or right of them: 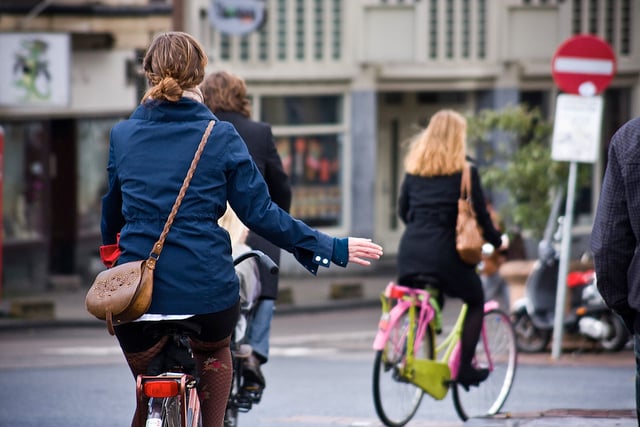 We saw lots of couples on dates, where the girls were riding sideways on the back of their boyfriends’ bikes. It looks cute and charming, although my friend Penny, who lives there, said that it feels like a horribly uncomfortable half-body ab workout:) 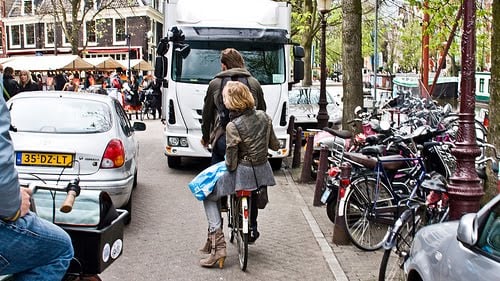 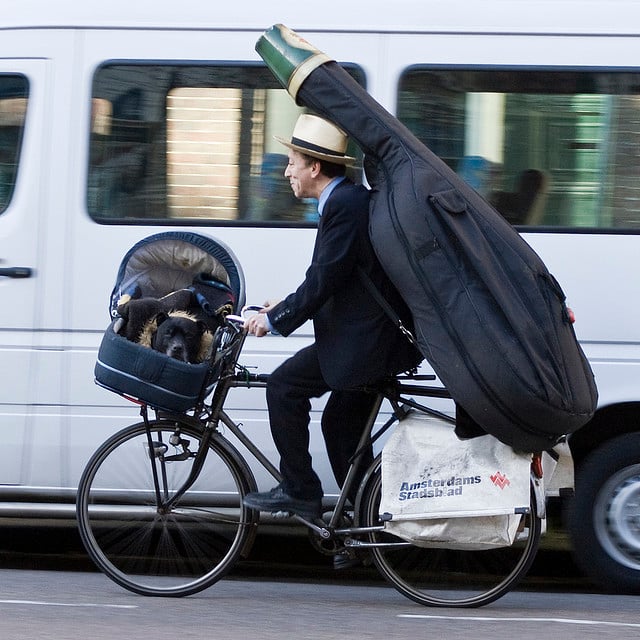 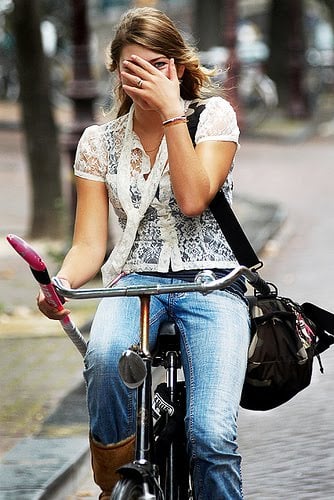 We saw people biking with dogs in their front baskets: 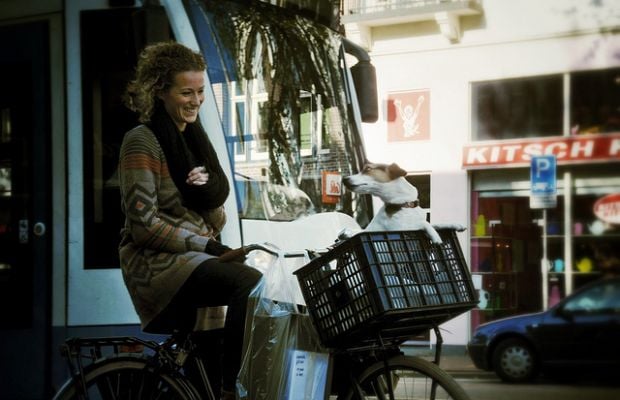 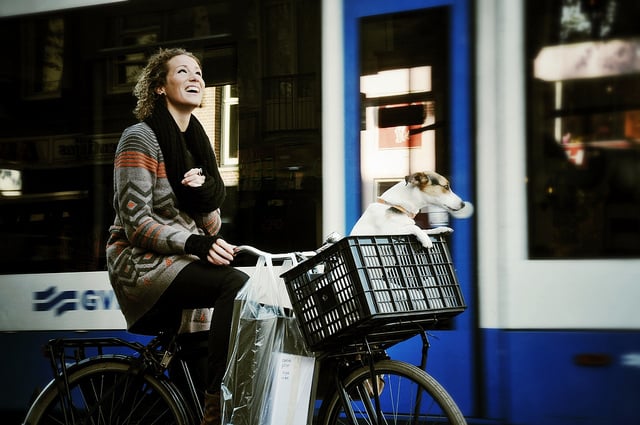 And, most of all, we saw families on bikes–often three or four kids on a bike with one parent! 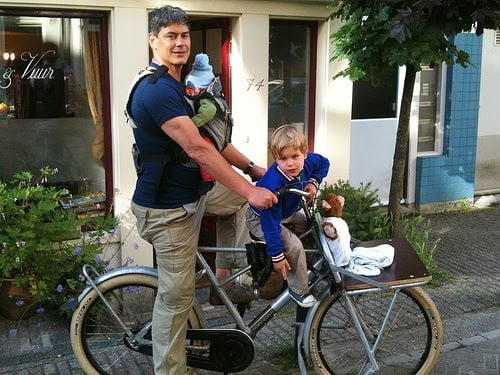 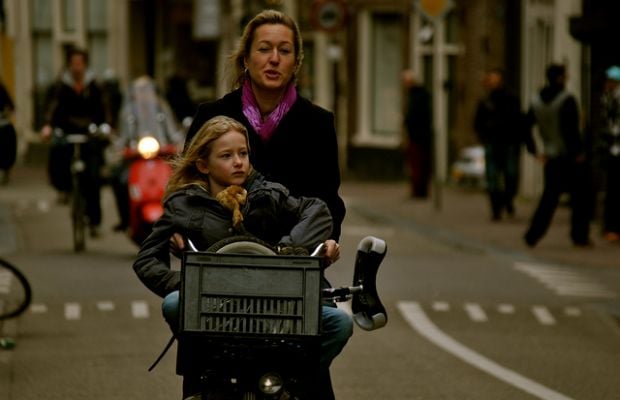 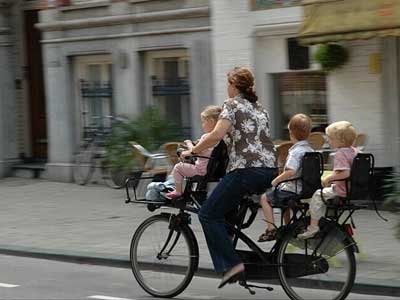 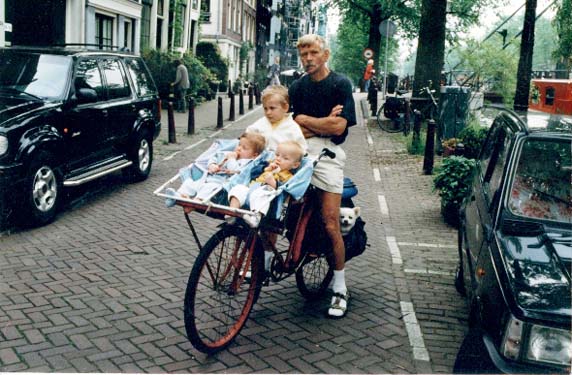 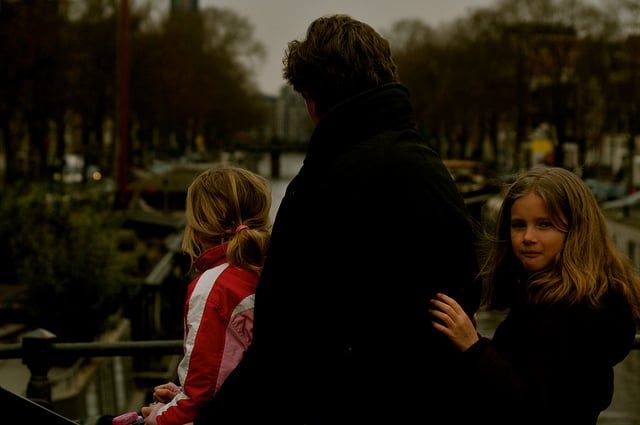 Other things we noticed about biking in Amsterdam:
* No one wears helmets, not even kids.
* People do everything while riding bikes: hold up umbrellas in the rain, eat sandwiches, smoke cigarettes, listen to music, talk on the phone, hold hands with their friend cycling next to them…
* Bikes rule the roads, even more than cars! Drivers watch very carefully for bikes, and pedestrians stay clear of the bike lanes. If there’s any question about who has right of way, it generally goes to the bike.
* There are big bike paths on pretty much every street in the city.
* The Netherlands has more bikes than people! The population is 16.7 million people, yet there are 18 million bikes.

We loved biking around Amsterdam–what a rad city!

(Photos from the brilliant Amsterdamize, Copenhagen Cycle Chic and Ottsworld)

Tags: amsterdam, baby, bikes, our vacations, travel
145 COMMENTS
WRITE A COMMENT
Design
most popular
01
My Sister’s Home Makeover
02
What Are Your Top Three Books?
03
The Ultimate TV Guide (If You’re Looking for Something Great)
04
Catherine Newman’s House Is a Joyful Jumble of Books, Games and Cats
05
Behind the Scenes: Making a Magazine Cover
May We Suggest…
By Joanna Goddard
Motherhood
10 Things I Did on My Weekend Alone (!)
September 7, 2021

505 COMMENTS
By Joanna Goddard
Design
Anton’s Bedroom Ceiling Is the Best Part of Our Apartment
May 10, 2021

I live in Dutch suburbia. I spent a couple of years biking my kids everywhere ….. it nearly destroyed me!!!! I wrote about it here https://www.facebook.com/writenowrebekah/posts/2103410119892105

I live in the city of Amsterdam with my husband and our two girls ( 2 and 8 years) I have a bakfiets and I love it! It takes us all over town and the girls love it too!

“The Netherlands has more bikes than people! The population is 16.7 million people, yet there are 18 million bikes.” Amazing!

I love your web page, it’s so inspiring. We’re going on a biking holiday with our 18 month old son to France and can’t wait to try out the Weeride which I only heard about because of your page. Thank you :-)

I like this informative blog so much .Really such a nice and awesome blog .
houston used cars

Nice idea to biking in Amsterdam

Love your phot’s & blog! So nice to read you were in Amsterdam. I hope you liked it.

I live in Amsterdam and honestly, I think it’s pretty stupid to bike around with your kids without a helmet on. Especially very little ones! It’s true, bikers do make the rules, but a car or a van is always bigger, harder, faster & stronger so in the end, the one on the bike will pay the price. Many people get killed on their bike in this city, also kids. Please dear parents, buy your kids helmets!!

When I lived in Colorado, my friends and I alternated between rollarblading, walking, and riding our bikes to school, without helmets; we only lived about half a mile away from our elementary and middle schools, which were across the street from each other.

I felt independent, travelling to and from school without my parents.

Now, as an adult, I wear a helmet whenever I ride my bike because drivers drive their cars in a dangerous manner and I don’t want to be killed by them.

Hi Joanna,
Very nice to read about how you experienced Amsterdam while staying in my houseboat. It is true we ride bikes like crazy. I especially had a gigle about all the comments on how people thing we are dumb not wearing helmets. I guess they’re right ….
We are a stubborn little country and I welcome all the people who come and enjoy our quirkiness.
Glad you enjoyed your stay, keep travelling!
Wends

My boyfriend lived in Holland for a while and this post reminded me of all the times I used to ride sideways on the back of his bike. It was so much fun, but your friend is right, it really is uncomfortable and I always felt so sorry for him when he had to cycle up hills, I’d just cheer him on from my little perch!

Even considering how safe it is over there for bikes, it is dumb not to wear a helmet. A single fall can simply kill a child or give you/them brain damage for the rest of your life. Accidents happen, and a helmet would save lifes. I would not take even a small chance of killing myself or my children by just thinking its unfasionable to wear a helmet.

It’s not just that it’s unfashionable though. I live in a small town not very far from Amsterdam, and I’m in my last year of high school. I have to cycle 13 km to get to school each day (and then I have to cycle back again at the end of the day). Most kids go to school on their bikes. There’s just wouldn’t be enough space to store all those helmets if everybody wore them (Dutch schools have really small lockers, much smaller than they have in the States). That means we’d have to carry our helmets around all the time, and that would just be impractical.

It’s not just schools, either. Going shopping while carrying a helmet with you? I don’t really think that’d work.

Who knew there were so many ways to customize bicycle riding? Awesome shots.

I was there a few years ago and was stunned that I don’t think I saw one single person wearing a helmet. Truth be told I thought that was kind of cool. I also noticed how nobody made a big deal if they had a close call with someone – no screaming or cursing or middle fingers. Just a nonchalant *ring ring* of the bell and on with their day. Totally different from the east coast, that’s for sure!

the pictures with the bikes loaded with kids reminds me of my family, living in holland. my parents had five kids under the age of seven, and it was common for my mum to load up three of us on her bike.

The Dutch do not wear helmets because they know that cycling is not a dangerous activity. I do not understand the ridiculous obsession in English-speaking countries with bicycle helmets. More people suffer head injuries from falling off ladders and being tripped up by their pets than they do from falling off bicycles. And there are many more people who suffer head injuries from car accidents. Why is there no call for helmets for those activities? It is ridiculous.

Avoid leaving your beach cruiser out in the rain or outside overnight if dew is a possibility for the next morning.

I LOVED biking in Amersterdam, and all around Holland. When people look at these pictures they don’t understand the dedicated lanes there, literally, they are separated from cars, you can turn without any worry of onslaught – its like a whole new biking world. People bike there with their children on the front and without helmets because they are protected and its safe.