About a Little Mole Who Wants to Know Who It Was that Pooped on its Head. (Seriously.) 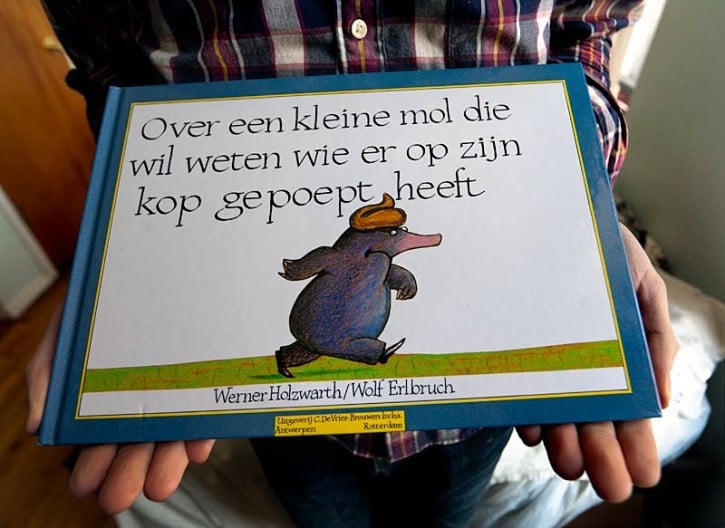 The funniest thing we discovered in Amsterdam was definitely this classic children’s book. The title? “About a Little Mole Who Wants to Know Who It Was that Pooped on its Head.” Look inside… 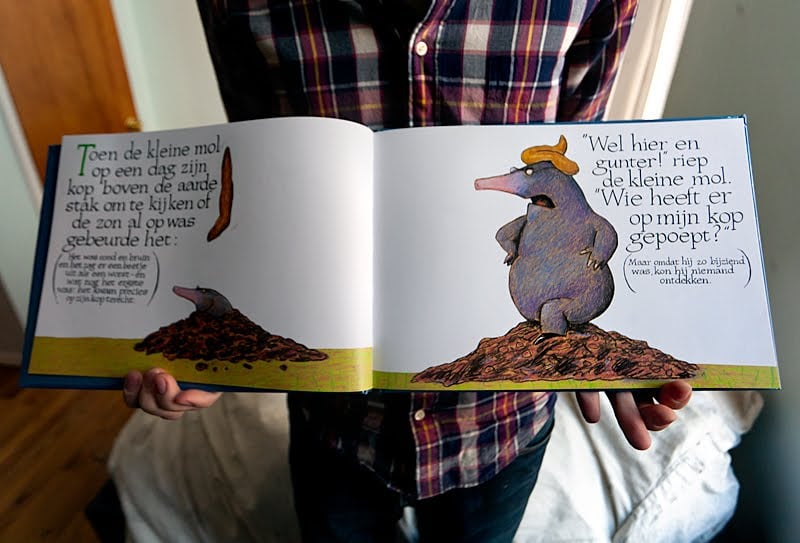 Written by a German author, the book tells the story of a mole who wakes up to discover poop on this head. Furious, the mole sets out to discover who did it… 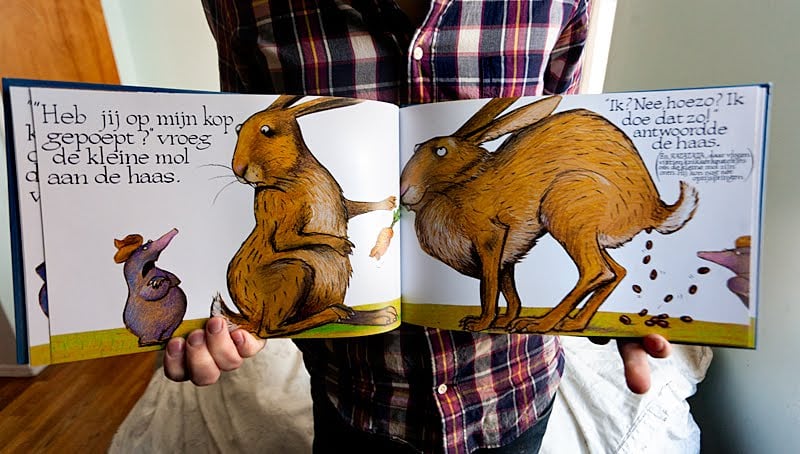 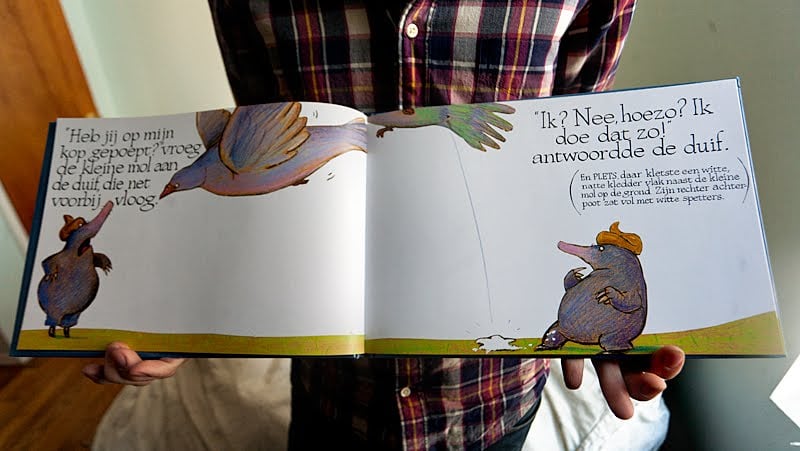 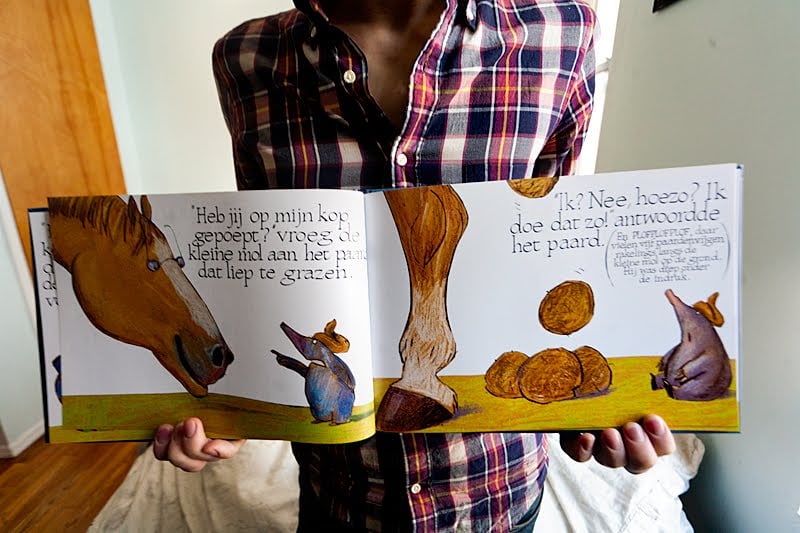 He approaches various animals–birds, cows, rabbits, horses, pigs–and asks them if they pooped on his head. To prove their innocence, the animals poop so that the mole will see that their poop looks different! (!!!) 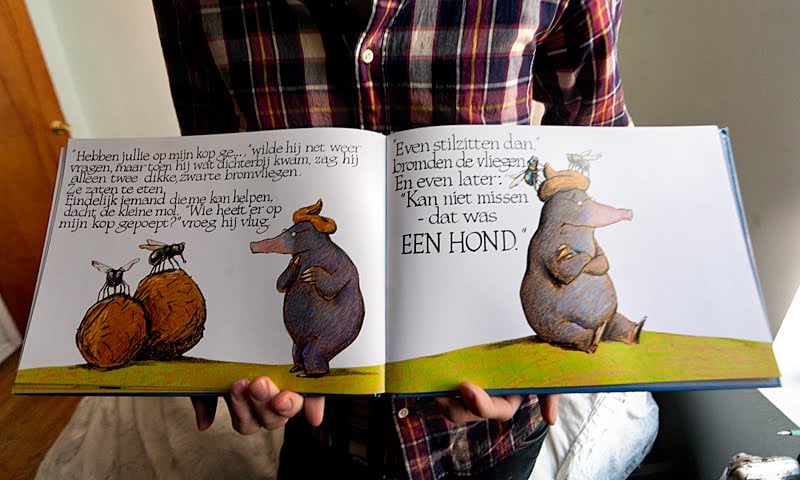 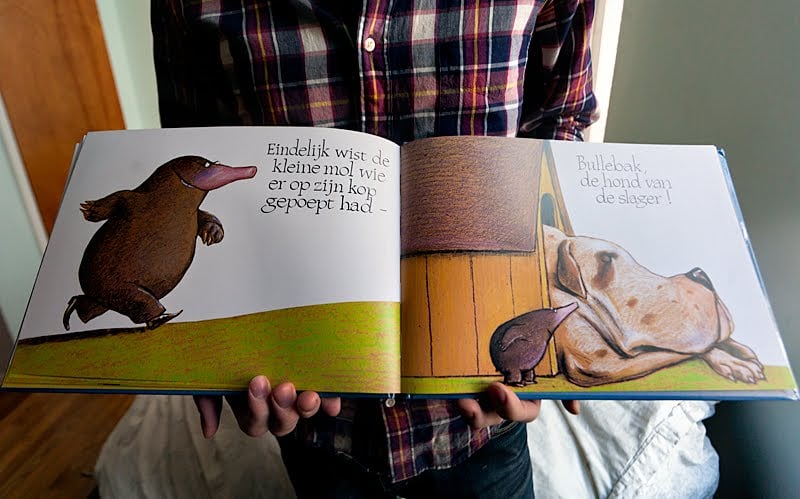 Finally, he comes across a dog and realizes he has found his culprit. 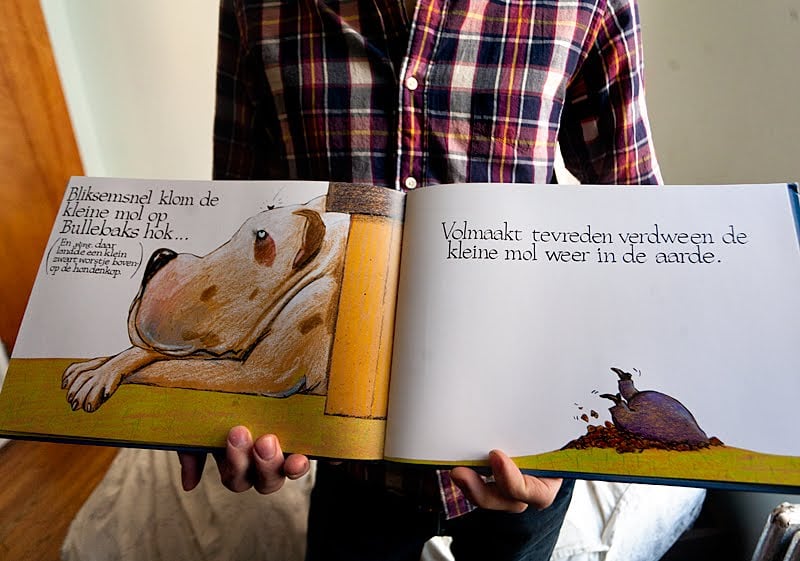 To get his revenge, the mole (you guessed it) poops on the dog’s head.

That’s it! How hilarious/awesome is that? I LOVE that it’s a classic. We of course brought a copy home for Toby, who doesn’t understand it right now, but it will no doubt be his favorite book once he wises up.

Have you ever heard of it? Did you read it when you were little? You can find it in English here. It’s officially my new go-to birthday present for little dudes:)

(Photos by Laura Ratliff for Cup of Jo. Thanks, Laura and Ryan!)

Tags: amsterdam, baby, books, genius, our vacations, travel
116 COMMENTS
WRITE A COMMENT
Design
most popular
01
My Sister’s Home Makeover
02
Emma Straub’s Brooklyn Family Home Is a Book Lover’s Dream
03
What Are Your Top Three Books?
04
The Ultimate TV Guide (If You’re Looking for Something Great)
05
Behind the Scenes: Making a Magazine Cover
May We Suggest…
By Joanna Goddard
Design
What Was Your Mom Like When She Was Younger?
April 6, 2020

I have a copy of this book in Korean. It’s a classic!

We randomly bought this book in the UK, where it is titled “The Little Mole Who Knew It Was None of His Business.” My then 18 mo old daughter instantly fell in love with it. She was a little confused by all the euphemisms for poop. “Mommy, those are apples?” It’s a favorite in our house. Love the illustrations!
http://mamamgeni.wordpress.com/

I found the original German version in what looks to be a smaller format than this in I don’t even remember what bookstore here in the states, I think maybe Borders (RIP)? They used to have a nice German books section and I also got a “Calvin und Hobbes” on the same trip, I believe. Anyway, it’s perfect for my elementary understanding of German from having studied it for exactly one semester in college over ten years ago.

My favorite thing, I think, is how in many languages, the title does not even mention the word “poop.” The American title seems to be “The Story of the Little Mole Who Went in Search of Whodunit” and in German I believe it translates to “The Little Mole Who Wanted to Know Who Made This on His Head” if I am remembering the title correctly.

The pop-up version is especially brilliant if you can find it, not sure if it’s being made any more.

WAH! I have this book as well…

It happens to be in German, due to the fact that I used it for teaching during college classes, but I can’t wait to use my little collection of these kids books to read to my baby on the way. I just may have to purchase it in English!

Love this book ;) I still have it, of course in German, and it remembers me when I was child, how often we have laughed :) THX
Greetings from Dubai!

My friend Bo just told me it was a fab book from her childhood. She lives in Amsterdam :)

Please post some more about Amsterdam, I would really love to read a bit more about it X

this book is pretty popular here in europe. in my generation nearly every household with kids owned that. It is really funny to read and as kids we really loved the poor mole. We still love him today. I also think that Toby will love it.

This is a favourite in our house. We borrowed it from the library and loved it so much we bought a copy (in English). We sometimes re-enact it – using softtoys and cushions etc for the poo – e.g. Dad plays the mole and my sons play the various animals. And I’m the narrator. Always a hit. :)

Hi, we are from Germany and my two children loved this book. I had to read it to my son when he was four almost every evening. Right now its my daughters favorite book. Here in Germany you can get childrens prints of the pictures in the book and we have one in the childres bathroom. A lot of our guests remember to read this lovely book. Thanks for your wonderful blogg, you have a lot of fans here in Germany :-)

I am from the Netherlands and loved the book when I was a little girl! :) Especially the goat and the sound the poop should make, like a quick marching band: rak-tak-tak.

Well as far as I can remember there was a goat in the book as well. But since I’m 27 now… It’s been a while I read the book ;)

when my son was two years old, he loved this book so much that he asked all the people he saw, if they pooped on his head.

My favorite picture in the book is the hare. I think his face just great!

I used to read it to my preschool classes when I was teaching. Fun! The kids just thought it was the funniest that the teacher would read a book about poo!!

We just got this book in Japanese when we were visiting Kyoto! It’s so funny and made it to my little Roo’s favorite book on her shelf!!! I couldn’t help to comment because just like 10 minutes ago… she brought the book out and pretended to go to bathroom. It’s the time for potty training!

We have this as a plop-up book in english, though we are from Germany, where that book originally comes from. There was a special offer on that english plop-up version, so we bought it. it’s the babygirl’s favorite book, besides an incredible pop-up book of Narnia, where the lion jumps out of the first page – right into your face :D
yo’ll have a lot of fun time with the little mole
http://www.amazon.com/Story-Little-Mole-Knew-Business/dp/1843650959/ref=pd_sim_b_3

we have this book and our little girl LOVES it…laughs so much! It was actually her american uncle that bought it for her, he read it as a child….so Im assuming you guys have it in the States.

Brilliant little book, although, I do get funny looks from family who dont think its appropriate! I think its a great way to teach something so normal as pooping!

Last year while living abroad in Korea and found this book (in Korean)!! I gave it to my niece and nephew as presents. No matter what language this book is in, the pictures say it all. I love it!!

My daughter Kate is 18 months and LOVES this book. Happy to see you had a great time visiting Amsterdam!

This is so funny! I can’t stop laughing after reading the whole post! hahaha! :)

Now, I have an idea what would be my b-day gift to my niece. hihihi.

I got the Afrikaans translation as a 21st birthday gift some years ago :)

Best children’s book ever! It’s really famous here in Europe, so I was thrilled to see you blogging about it :)

We bought it (perhaps in the same Amsterdam shop) for our niece and nephew, a few years ago. They still love it! I was a bit hestitant, but my husband is the wiser person here, or more childlike. That probably comes down to the same thing :)

This was part of the curriculum I taught to my kinder students in South Korea. It always cracked me up. Another great one, Mummy Laid an Egg by Babette Cole.

YES!!! This book brings back memories when i was little! My sister and I adored this book so much!!! You totally made my day!