Motherhood Mondays: Would You Throw a Gender Reveal Party? 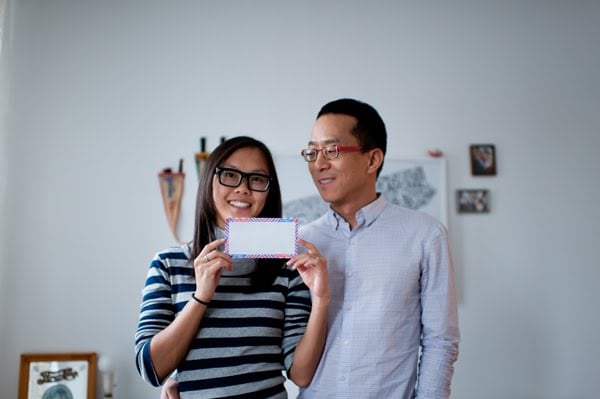 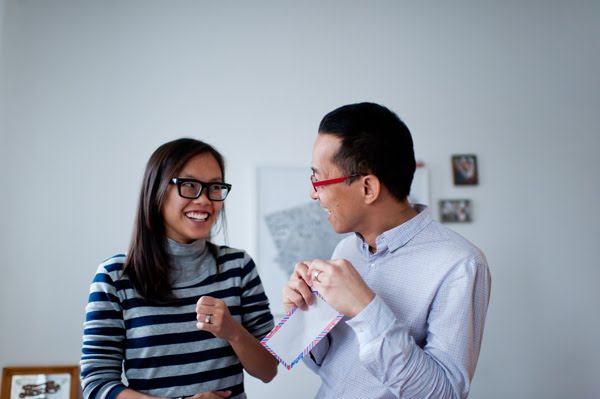 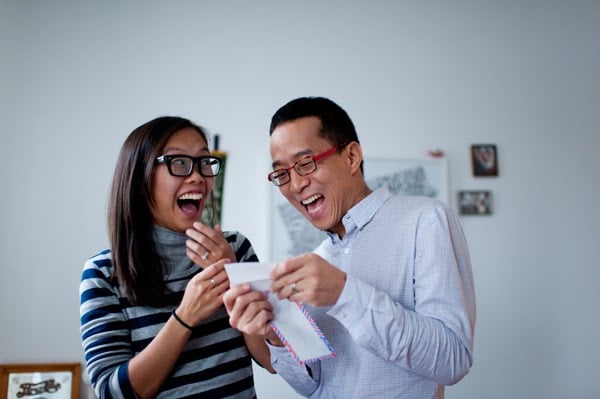 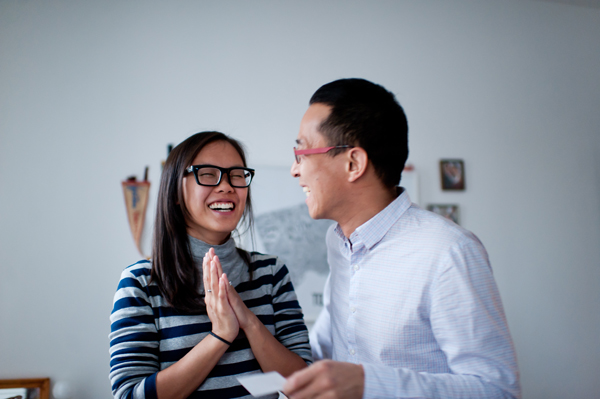 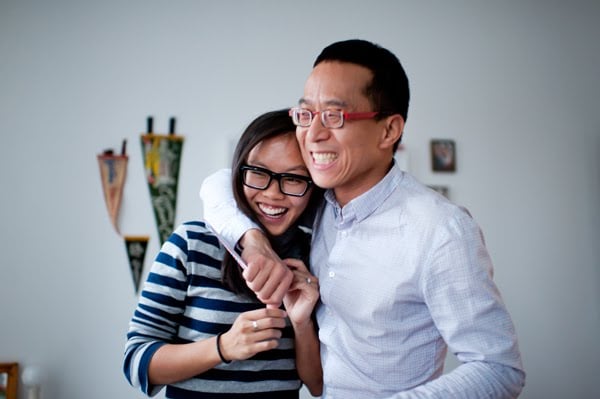 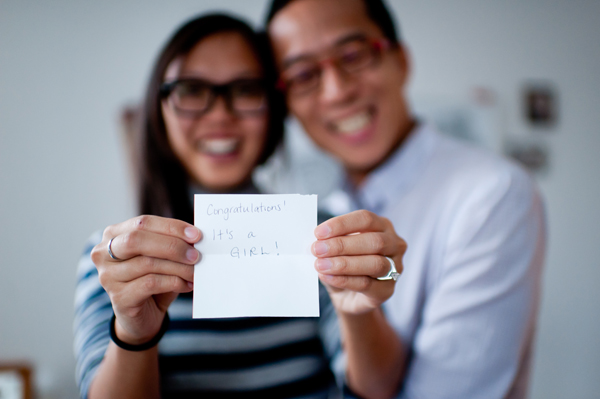 Celine and Jin, above, told their midwife to write their baby’s gender on a piece of paper and seal it in an envelope. Then their photographer friend Gabe came over to capture the moment that they discovered they were having…a girl! How adorable is that?!

Alex just wrote a New York Times article about the increasing popularity gender reveal parties, where expectant couples invite friends and family over to witness the moment of finding out the baby’s gender. You could cut a cake to reveal either pink or blue cake inside, or you could open a wrapped present and pull out either pink or blue baby pajamas. Or here’s another idea: Brooke’s friend took her family to a baseball game and bought either blue or pink cotton candy!

P.S. The day we discovered Toby’s gender, and his teeny sonogram.

(Photos by Gabe for Celine)

Tags: baby
157 COMMENTS
WRITE A COMMENT
Motherhood
most popular
01
21 Completely Subjective Rules for Raising Teenage Boys
02
Best of: Parenting Around the World
03
Trying Out Slow Parenting
04
How Did You Know You Were Ready to Have a Baby?
05
Three Transgender Kids Share Their Stories
May We Suggest…
By Joanna Goddard
Motherhood
What Was the First Meal You Ate After Giving Birth?
August 23, 2021

i love gender reveal parties! They are so much fun! I will absolutely do one when I am pregnant!

I did a gender reveal party earlier this month and it was really fun! The ONLY way I would let my mom throw this kind of party, though, was if my husband and I found out without a crowd around. So… we actually knew a MONTH before the party. There was NO way in HELL I was going to find out the sex of the baby in front of everyone. I didn’t want to look ungrateful for the chance to be pregnant and a mommy because I was disappointed by the gender. It turned out to be a boy and I was in shock. I always imagined myself to be a “girl” mom, but I have had time to process it, read your blog about this topic, and am really happy about it now! But, if I found out in front of everyone, I probably would have cried thus making me look completely ungrateful for the year struggle of trying to get pregnant.

Wow, what a bunch of naysayers! Life is short and we should celebrate it. Whether it’s getting a job, celebrating a birthday or finding out the sex of a baby, I say go for it!

I just had to comment on this one! I just gave birth a few months ago and didn’t find out the sex at all (until the very end)! My husband and I just believed (even before we were pregnant) that finding out the sex of your child is one of the last few genuine surprises left on this earth. So much in our lives is predictable.

Yep! We did the same-all our friends who were pregnant at the same time (2003) decided to have “surprises” it was so fun for all of us. Most of the names were surprises as well. If I had 5 more kids I would keep the surprise till the end, it was the best day of our lives. Life doesn’t give us many surprises and this one is # 1!

PS note***one friend forget to remind her Dr that she didn’t want to know the sex and during a 36 wk ultra-sound he said “oh, look there’s the penis” OOPSS! she made it all that way-she still kept it secret though.

I’m really surprised by so many negative reactions to this idea. I personally think it’s a really fun way to celebrate your baby – whether it’s a boy or girl doesn’t matter, it just captures the excitement that comes along with one of the fun moments of pregnancy.
We’re expecting our 6th and after the 1st we didn’t have any more showers….I felt the excitement over each baby was kind of missing. This way we have an “excuse” to throw a party and celebrate this wonderful new little life that’s on it’s way to our family.
No pressure, no gifts, no self-indulgence….just a fun way to acknowledge and share the joy of our new gift from God. We also couldn’t have all 5 of our kids in the ultrasound room with us, so this way we all get to find out together with some close friends and family. I think it’s a great idea. =)

Me and my husband just had one this weekend, we did the cake thing and had the ultrasound tech write down to gender & seal it in an envelope and took it to the bakery. It was so much fun to find out the same time with our family and friends! It’s our first and we struggled a bit to get this little girl here so we wanted to celebrate!

This is a cute idea! I love this creativity. We didn’t have the wherewithall to throw a party, plus we didn’t even want to surprise ourselves. We want to SEE it for ourselves, and we did. But we thought maybe there’d be a more fun way to tell our family/friends. Since most of them are remote, we decided to do a video.

Here it is if you’re curious:
http://katelynmade.blogspot.com/2012/03/gender-reveal-its.html

I call us “20 minute productions.”

I agree – quite self-absorbed…. do people really care all THAT much if I’m having a boy or girl?? not likely……

It’s over the top. Obviously it works for some people, but I would never do it. And as others have said, seems self-absorbed. When we had our 4th child, we did cut a cake with our other children to discover pink or blue inside. The kids thought that was fun.

Such a beautiful idea!

My husband and I had a lunch for just our parents. It was a nice way to celebrate a healthy baby on the way and we surprised them when they bit into the cupcakes… pink in the inside for our little girl!

I’d also be concerned that some expectant parents would feel as if they HAD to do the gender reveal party, when they perhaps did not wish to. While this might be an evolving trend, I can see mother in laws of the future saying…Jane and Mary did it this way, when will you be having your party?

I also find it a little precious. Not to be mean, but let’s face it…gender reveal party for the first baby…cute(perhaps), gender reveal(or a baby shower) for your third baby…not quite as cute.

I absolutely hate this idea. Yeah, let’s have a party to encourage restrictive gender roles! Would never ever do it, would never, ever attend one.

I think this trend is getting out of hand. Balloons flying out of boxes, cakes, parties. Just seems like a privileged class kind of thing to do. Like a Kindergarden graduation party or something. Does anyone except the parents really care what the sex of your baby is four seconds after they find out? If you have it as a part of a baby shower or something, that’s one thing. But a special party just to find out the sex? I agree with those who say it’s self indulgent. By the way, I have three kids. We didn’t make a big deal out of what they were, just told those who asked.

Whatever next :) How self absorbing society has become.

My brilliant friend Amber just threw one for her/her husband’s family. Amber and her husband knew the sex, but wanted a neat way to tell everyone. So they bought lottery tickets and made their own versions… only the scratch-off portion revealed if it was a boy or girl. They made them so well that the family had no idea they were anything other than regular lottery tickets. So it was an extra big surprise to scratch off and reveal “IT’S A GIRL!”

@anonymous. I have a question, so if you have an issue with stereotyping, what do you name your child? Or will it be like the old SNL sketch with Pat, where you never really know if Pat is supposed to be a guy or gal. So are you just going to wait to name the kid till they “decide” what they are going to be?

I know many transgender people and this sounds just stupid. You can’t be sure of the child’s gender identity before the child knows it and I don’t know why you should celebrate the fact that the child has female/male genitalia. What is the baby has traits of both sexes? And the colors schemes sound depressing. I wouldn’t like to strengthen any stereotypes of what little girls or boys should be like.

Gender reveal party, I’ve heard it all now. Ugh, so self absorbed and narcissistic. This modern day fetishisation of parenthood has gone too far for me.

Seriously, who cares, in the nicest possible way of course, if someone is having a boy or a girl. The parents, that’s who. And as for hiring a photographer to document the moment of the reveal. There are no words!

i dont like this idea.A healthy baby is the most important issue than anything.In few countries to reveal gender is illegal coz if parents/family found its girl they straight go for abortion.How inhuman!!

I wouldn’t. I think it’s too much. I’m an obsessed parent but I don’t want to bother my (single) friends with this cutesy event. It’s the kind of party Charlotte would throw that the other girls from SATC would probably find annoying.

I think this is such a fun idea! I’ve been trying to think up ideas to celebrate our next pregnancy instead of a baby shower.

I just had to comment on this one! I just gave birth a few months ago and didn’t find out the sex at all (until the very end)! My husband and I just believed (even before we were pregnant) that finding out the sex of your child is one of the last few genuine surprises left on this earth. So much in our lives is predictable.
Our friends who have found out during the 20week ultrasound say it is just as exciting to find out then. But I don’t think anything compares to finding out in the midst of the crazy energy after being in labor for 24+ hours.
And to those who say that they need time to get the nursery/layette ready…well a little boy’s penis won’t fall off if he wears something pink or vice versa.
I’m all for the mystery, beauty, and sanctity of birth in every aspect.