Motherhood Mondays: Sleeping in Denmark (This Made My Jaw Drop!) 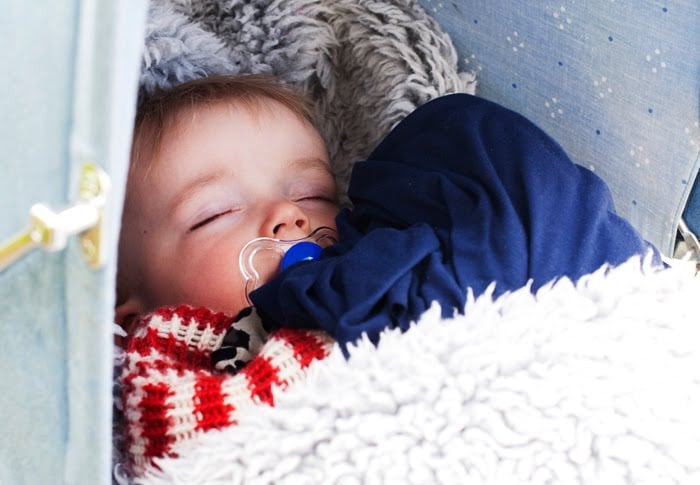 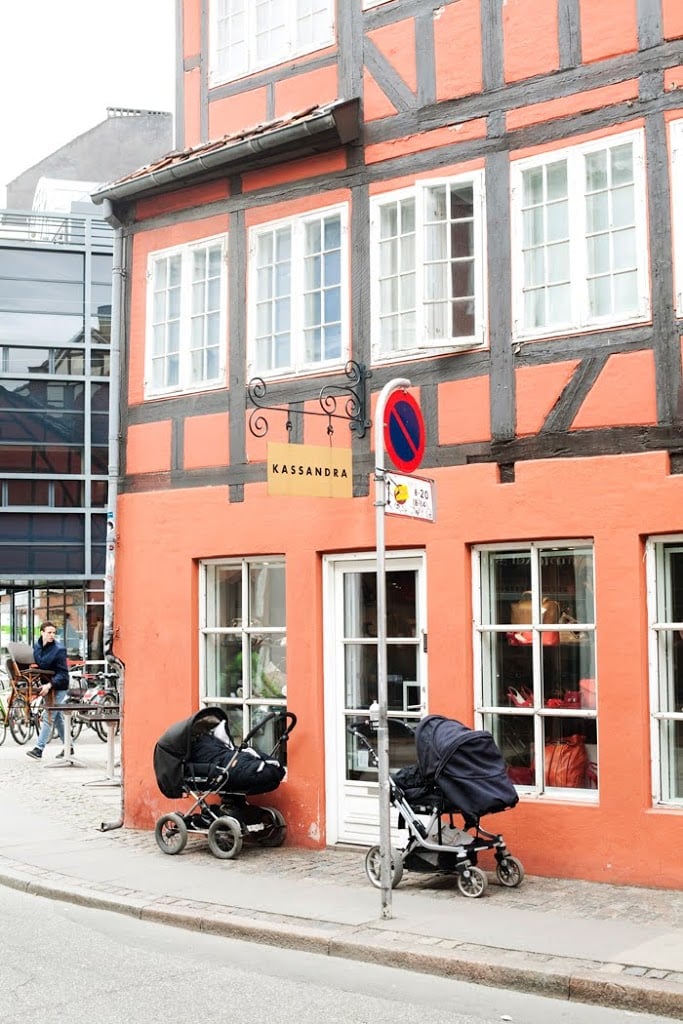 We talked last week about taking kids outside to play every single day, even in cold weather. Well, listen to this…

In Scandinavia, it’s common for people to take their babies outside for naps. And, when they go into restaurants or shops, they’ll even leave their sleeping babies alone in prams outside!

“When I lived in Helsinki, I noticed baby carriages outside most cafés,” says my sister-in-law Emily. “I assumed the babies were inside with their parents. Nope, they were sleeping soundly outside in their carriages while their parents were hanging out inside. Now there’s a country with a low crime rate for you!” 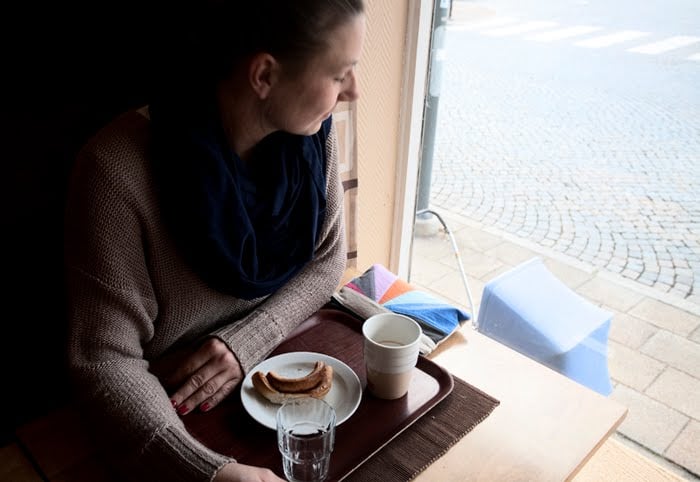 “The parents are usually really close by, near the window,” says photographer and mother of two Jenny Brandt, who lives in southern Sweden and went to Copenhagen to take a few photos for Cup of Jo. “I think the whole thing started because the cafés and shops are so small.”

What happens if a baby wakes up? “I’ve walked into a café letting the guests know that ‘the baby in the blue pram has started to wiggle around and looks like he’s about to get up,’ ” says Jenny.

It sounds crazy at first, right? But it would actually be amazing and liberating, I think, as long as your town was safe. How wonderful to just pop into a store quickly without waking up your baby; or to eat dinner with your spouse while your baby sleeps, and then all walk home together. 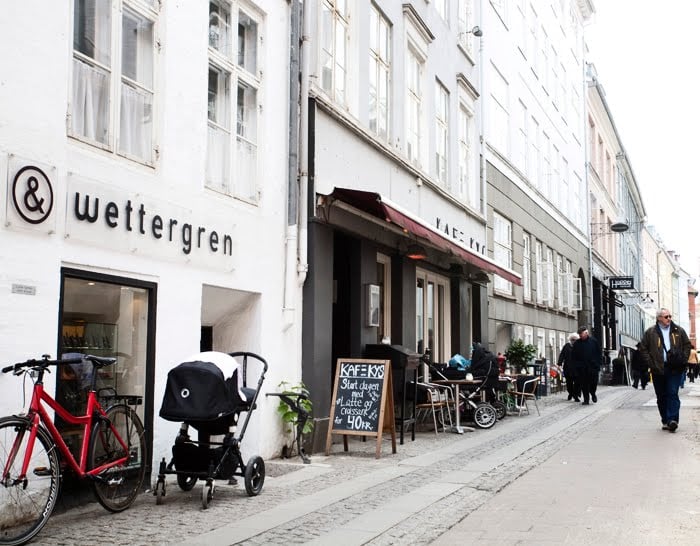 Plus, many Scandinavian parents believe it’s healthy for babies and children to be exposed to cold air for a few hours a day. In fact, the Finnish Ministry of Labour specifically recommends it (see page 24 under “naps”). “Parents feel that their child is more alert and eats better after sleeping outside,” says designer and mom of two Elisabeth Dunker of the blog Fine Little Day , who lives in Gothenburg, Sweden.

“My friends tell me that in Swedish daycare, naptime for babies is always outside in their prams, even on the coldest days,” says my friend Kim, who lives in Sweden. “They bundle them up and make them cozy, and park them outside. They say it builds health for the kids–physical toughness as well as reducing colds/germs that would spread if they were all cooped up inside.”

Not all Scandinavian parents are completely sold on the idea, though. “I’ve never let my kids sleep outdoors unattended, wouldn’t dare to!” says Elisabeth. “I would be afraid that someone would take them.”

I have to say, I kind of love this idea! Toby sleeps through the night starting at 7:30pm — it would be amazing to be able to take him out to dinner, where he could sleep soundly in the fresh air. Think how much money you’d save on nighttime babysitters, and it’s really nice for the family to be together, even when the baby is asleep. But it’s illegal in the United States. In fact, back in 1999, a Danish mom visiting Manhattan left her sleeping baby girl in the stroller outside a restaurant–and got arrested.

What do you think? Isn’t this fascinating? Does this all seem nuts or amazing to you? I would LOVE to hear your thoughts — all the cultural norms and differences are incredible! Every country, city, family and parent finds what works best for their sweet babies. (It reminds me of this wonderful documentary.) 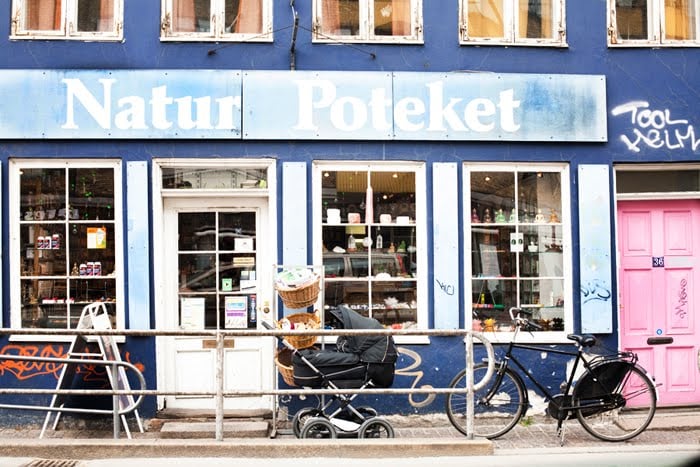 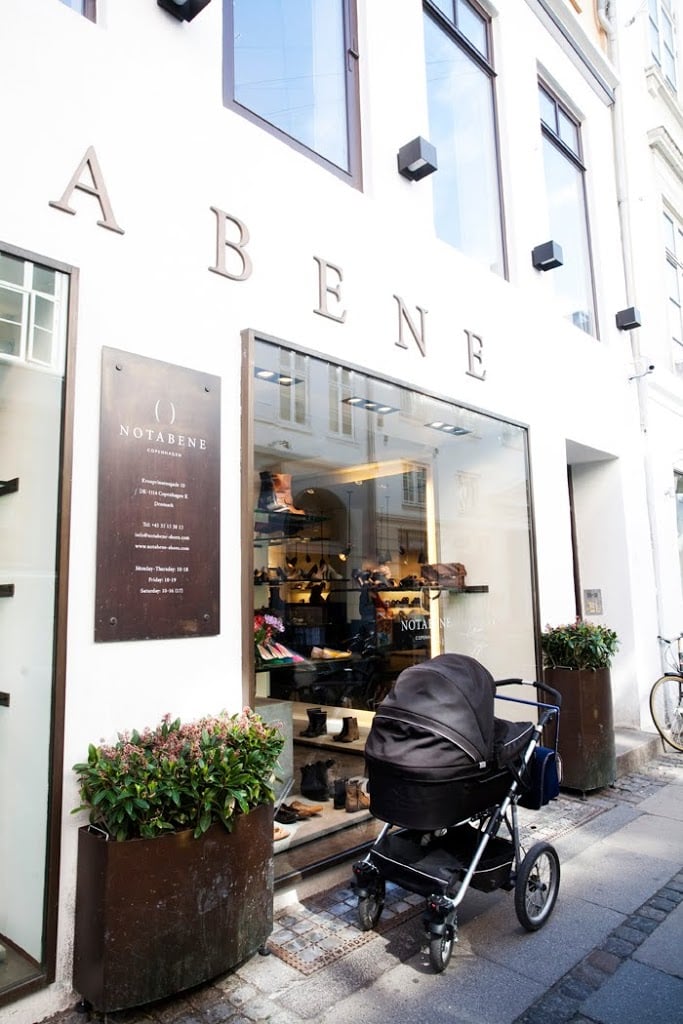 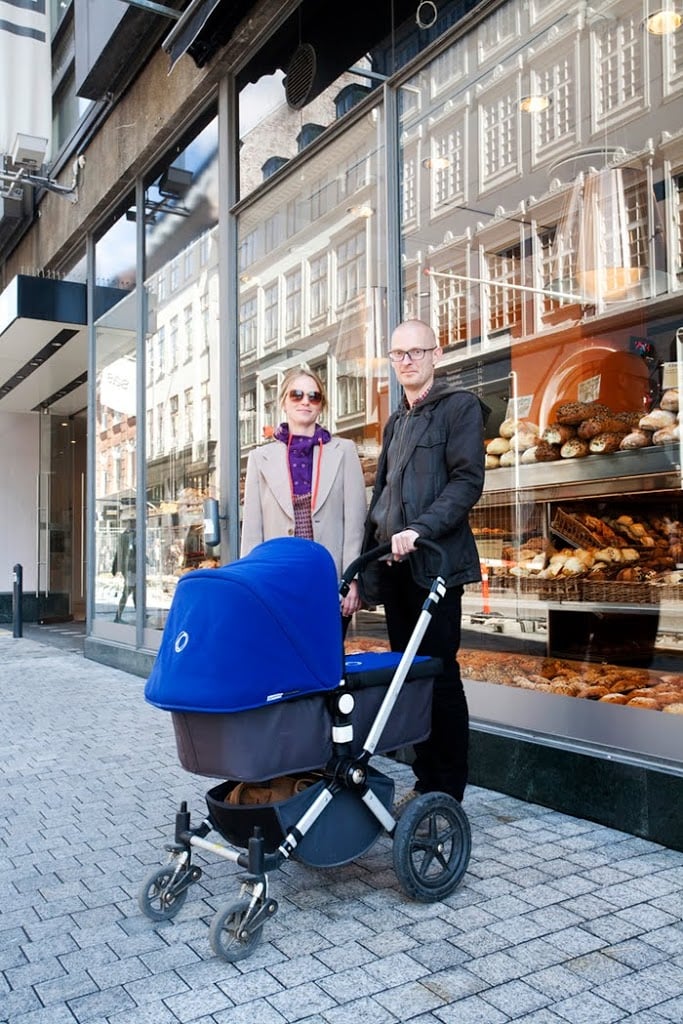 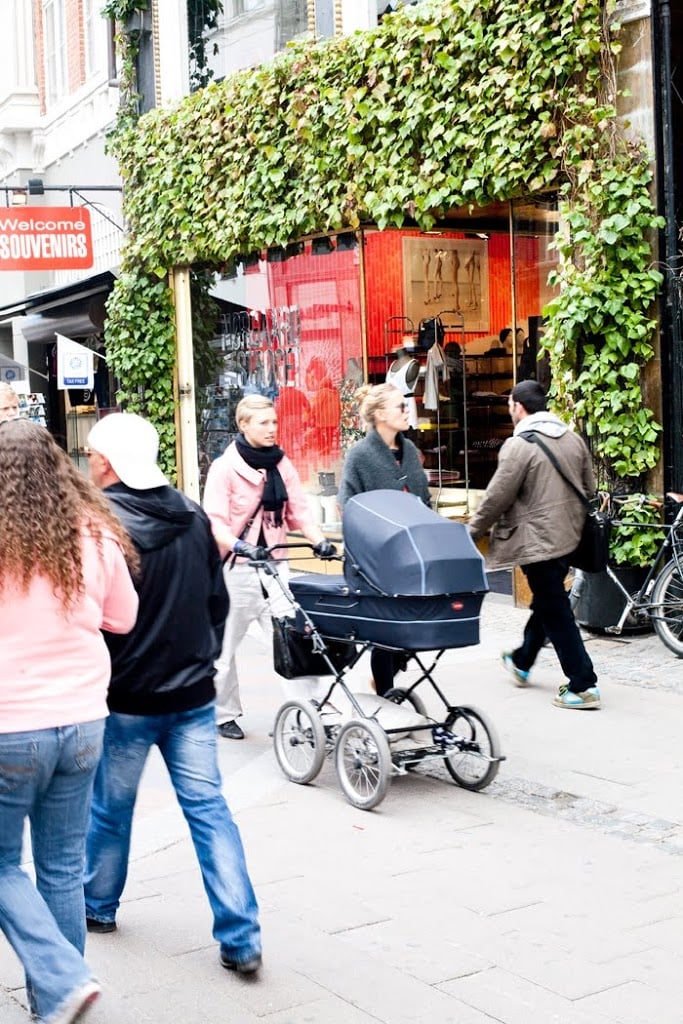 (Photos taken by Jenny Brandt/Dos Family for Cup of Jo)

By Joanna Goddard
Motherhood
5 Tips for Hiking With Kids
September 23, 2019

In 1983 I was in Helsinki on a student trip, and I freaked out when I saw what I assumed was an abandoned baby in a pram outside a shop! But our professor calmly explained that the mom had one eye on the pram from the large window of the shop. I asked him, aren’t they worried about kidnapping, and he said, “No, they don’t do that here.”

Mom from Finland (Helsinki) here. Like the article says here everyone does it and tbh I never even reflected on that it might nit be the case in other parts of the world. On Wednesdays I go to a parent-baby work out class and afterwards there is a group of us that all go to lunch to the same cafe in the middle of the city center. The café has big windows so we can see our strollers all the time. Some parents bring baby monitors so we can also here if one of the babies starts to fuss/cry. But it looks super cute when they’re all napping next to eachother bundled up in their strollers outside the window. They’re all wearing layers and layers so they are definitely not cold. Oh and I’ve never heard of any babies gone missing, it would have made the news if it happened. I guess that’s an upside of living in a small country, we all kind of trust eachother.

French/American mamma here…
My son is 14 months and pretty much ONLY sleeps in his stroller. When we get home, I go through the back and pop him outside the laundry room window, and crack the window. He’ll stay out there for hours. I bundle him up if it’s chilly, and he wakes up cooing and happy.
This is *such* a lovely way to balance a family’s needs- going into shops/walks/baby’s nap schedule. Every time I go back to France and other parts of Europe I am amazed at how different child-rearing is there. So much less insular/isolated. In my opinion, far more holistic than the American approach.

Baby cages used to be a thing for this very reason. (One of the first people to rig one up was Eleanor Roosevelt (the First Lady of the US) in 1909. Anyway. They were very popular in London until the blitz. It allowed babies to get fresh air in cities.
https://www.mentalfloss.com/article/65496/brief-and-bizarre-history-baby-cage
Nowadays most people would buy them for their cats but it makes me think maybe for babies it would be good to bring back. Especially in cities.

Here is my experience. My husbands mother wrapped him up and put him on the porch in the winter for a couple hours a day. When he grew up he was insistent that he could never get warm. I slept with a window cracked open and he would wake up and scream at me because he was so cold.
This is also the woman that left her son in Wisconsin with her sisters family for a year because her husband was going to be stationed in New York. She would not leave her husband just a young child in grade school. He grew up feeling rejected always.

When I first read about this being a thing, I put it into practice immediately. I have two young children- 21 months and 7 months. For afternoon nap, I take them on a walk in a double stroller, then when they are asleep, we come back home and I let them sleep while I work in my garden. I can’t wait to see how this works in the winter! I think it’s brilliant. I Google searched “how to get baby to sleep outside” and this was one of the articles that showed up! I’m in Minneapolis, MN and it would most certainly be illegal to leave them outside of a business, but there aren’t many shops around where I live anyway. I love this!

How did it go?

Hi, i am from the Czech Republic. Up to when I was a teenager ( i left the country then i was 20), prams were regularly parked outside shops, with babies inside, whilst mums were doing their shopping. And that was in the heart of the city. If babies woke up and cried, there would always be someone near who would rock the pram until the mum’s return. Usually senior citizens. We also believe that the afternoon nap should be taken outside in the fresh air. Living in England i noticed that children are not taken out everyday. This most likely have something to do with the fact that it rains so often. But i learnt to improvise. When my children fell asleep in the pram, and it started to rain, i would pull the rain cover over and leave the pram in the garden, obviously making sure of air supply, and let them sleep.

Dear all Scandinavian parents: The people that are making a big deal about leaving your baby outside are mainly North Americans. Please continue doing this and don’t let anyone tell you that it’s wrong. Being from Canada, I am so envious of how you Scandinavians live and wish that we didn’t have to constantly live in fear. We (in North America) constantly live in fear that our children are going to be kidnapped or fear of what others might think. We are constantly being judged by others about our parenting and made to feel that we need to watch our kids 24/7 because if we don’t, we are a bad parent. If we (in North America) were to leave out child outside like this, we would likely be reported to Child Welfare and be charged with neglect and likely have our child taken away. Seriously. There was a case recently in the US where a 12 and a 10 year old were playing in their own backyard by themselves for 20 minutes and a neighbour reported them to authorities and the parents were taken to court for child neglect. It is so so sad that we have to live this way and even if we don’t want to be helicopter parents, we still face the fear of what others might think.

This just reminded me of an appalling story that happened to my sister-in-law last year. My niece and nephew were playing in the living room of their house and – being 3 and 5 – they love to run around naked. Well, on this particular afternoon the curtains were open and someone must’ve seen inside because the police showed up at the door asking what we were doing in the house. Apparently, someone had called the police to say we were filming child porn in the living room. I wish I was exaggerating :( What a horrible thought. The police came in, took a brief look around, realized it’s a normal family home with normal kids running around and left us alone. Thankfully – it could’ve been much worse. I have no idea why someone would jump to such a conclusion. I care about the welfare of children as much as the next parent, but that is just twisted.

This post made me miss Finland, my home country. In Houston you cannot do it for few reasons: temperature being the major one – it is too hot and second; you would get arrested for that. I wish it would be doable, as babies sleep longer naps that way.
Being a mother abroad; Sometimes feels like an easter surprise egg in one’s hand when you come from a country, where one is tolerated to do so much more, e.g. leaving the baby in a stroller or letting the kids walk to school and that is the model I have learned. You keep guessing what can you possibly get away with here ;) Instead of the stroller I have done the very Finnish thing…our baby learned to go to sauna when he was 4 months old :)

My baby has been sleeping outside in his stroller since he was born. No weird thing about that :) It’s so practical. If I need to go groceryshopping or something, I can still do it while I take him with me.
He always wear 2 or 3 layers of wool inside his sleepingbag (the inside of it is also made from wool) during the winter season. Wool helps regulate the temperature like nothing else <3 So he's never (ever!) cold. I think it's weird that people don't do this elsewhere.