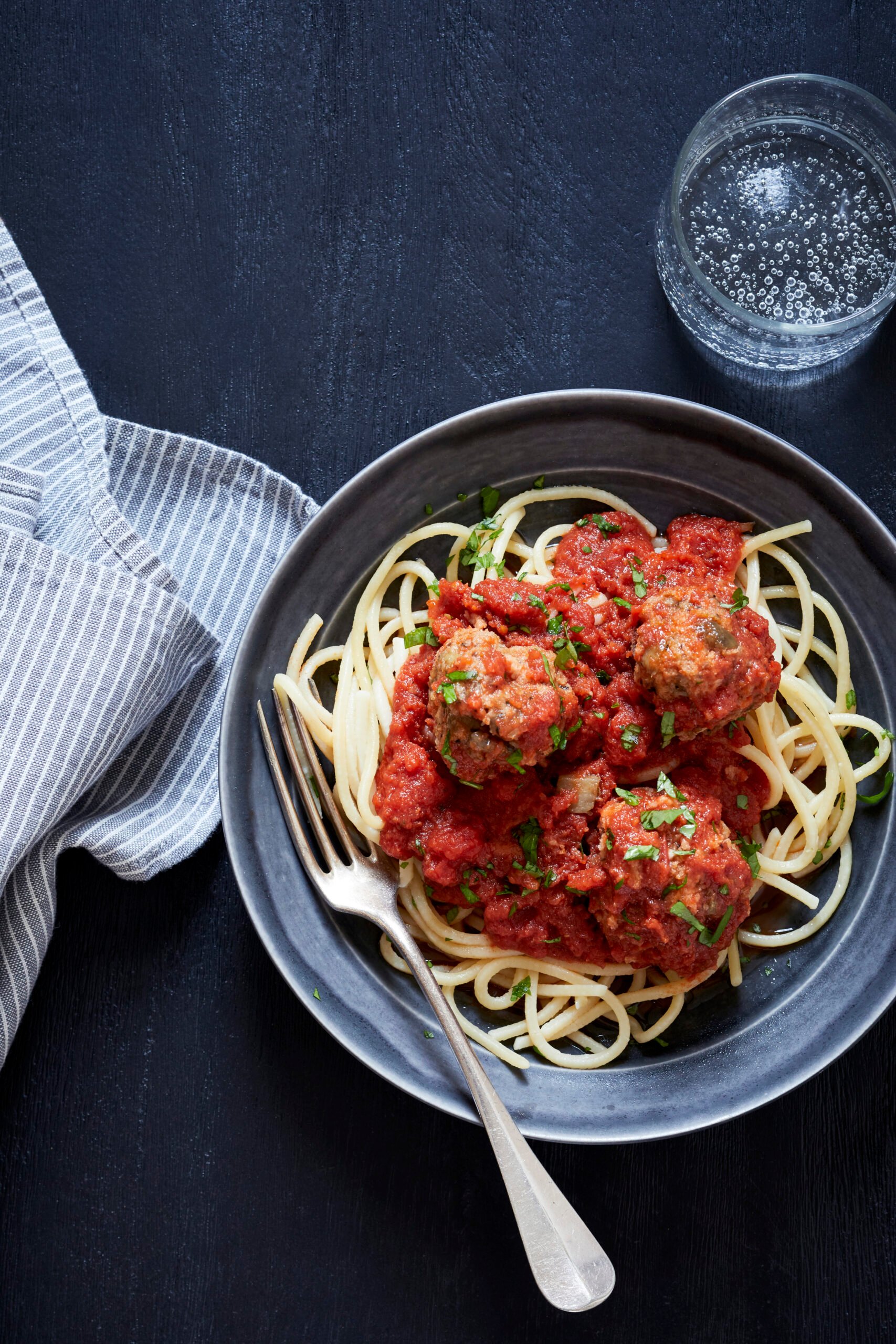 Nisha Melvani, creator of Cooking for Peanuts, knows the secret to helping people who want to eat less meat…

Start with one meal. Start with dinner. Her new book, Practically Vegan, has a bunch of easy vegan recipes to get you there.

Melvani was born and raised in Jamaica to Indian parents and lived in London and Montreal, before settling in New York. Her grandmother was an amazing cook, while her mom “ate because she had to,” and her dad, who loved vegetables, was somewhere in between. That meant dinners growing up were a mash-up of Chef Boyardee ravioli and from-scratch mutton curries. “Having been exposed to these extremes,” writes Melvani, “resulted in giving me a balanced perspective about how food can mean such different things to different people.” 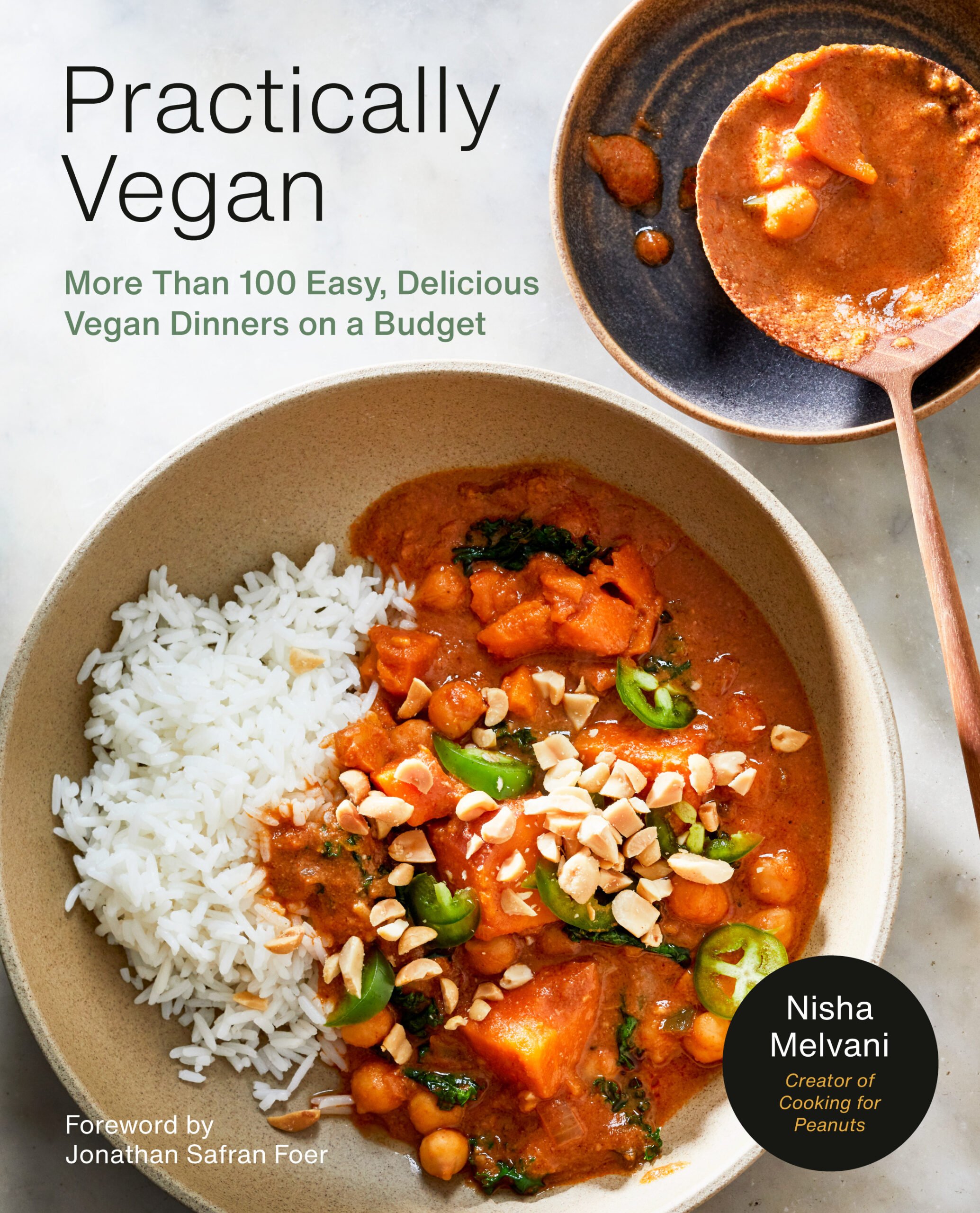 Preheat the oven to 400°F. Line a baking sheet with parchment paper or a silicone mat. Set aside.

Heat the olive oil in a large skillet over medium heat. Add the eggplant and cook, occasionally mashing it with the side of a spatula orwooden spoon, for about 5 minutes, or until the eggplant starts to become tender. Add the onion and cook for 4 to 5 minutes more, until the eggplant is cooked through and tender but stillholds its shape.

Add the garlic, basil, oregano, thyme and black pepper and cook for 30 seconds.

Using your hands and about 1½ tablespoons of the eggplant mixture for each, form 15 meatballs. Place the meatballs on the prepared baking sheet and bake for 15 minutes. Flip them over and cook for about 10 minutes more, or until golden brown on both sides.

Meanwhile, cook the spaghetti according to the package directions until it is al dente and heat the marinara sauce in a medium saucepanover medium heat.

Allow the meatballs to cool for about 10 minutes. Transfer them to the saucepan with the marinara sauce. Heat gently until warmed through before serving on top of the pasta and garnishing with parsley.

Just wanted to express gratitude for sharing Nisha’s cooking; it has given me a tether to my family’s cooking.

My mother is from Guyana, where the food is memorable and thick with Indo-Caribbean influence. My whatever reason, my family has painted the food as too involved to make for an American-born such as myself, shared too vague guidance, or found recipes that cannot bend away from meat use. It has added too many barriers to me making food that makes me think of family.

Though our backgrounds still differ, Nisha’s recipes are incredibly approachable, modifiable, and resonates with taste buds remind me of family. Thanks for this :)

Looked delish and had my favorite ingredients. The flavor was spot on. That said, I’m changing next time. The large amt of bread crumbs made them gummy I thought. So, I’ll do half bread crumbs and 1/2 oatmeal like I do for regular meatballs :)

Can I make this ahead of time and store the meatballs the refrigerator?

I’ve been precooking eggplant in microwave and mashing it into a paste to add to my spaghetti sauce for 42yrs … my children are ages 45 , 50 & 51 and still love my sauce and comments from their friends and have no idea it includes eggplant to this day……

How many servings is this?

It says “Using your hands and about 1½ tablespoons of the eggplant mixture for each, form 15 meatballs.”

Yum!!! These look amazing. I love eggplant parm, but can’t have dairy anymore, so this is perfect!

How do you preserve Eggplant if you grow an abundance in the garden?

I will definitely be making these.
They will delicious
Thanks
Wish I could print it out

Not easy it’s all water unless you make Eggplant Gravy

How did I not know about Cooking for Peanuts! So excited to get the cookbook, too. Love the plant-based posts.

These look fantastic! I love to grow eggplant in my garden each summer, so always looking for new (and vegan) ways to cook with it.

Thanks for the recs Mel! I’m always eating avocado toast for lunch and roasted veggie bowls for dinner so these should definitely give me some inspiration! I’m also super lucky that I live in Southern California where true to streotype there are a ton of plant based restaurants!

A little off topic but I was hoping the COJ hive might have suggestions for books, recipes, etc for making simple baby foods??! We have done a few purees just to get comfortable but I’d like to make some but I’m very intimidated. Im a WFH mom so easier the better. We aren’t ready for BLW, so just the beginner stuff would be so so so appreciated.

I wrote this when anton was a baby, in case it’s helpful! https://cupofjo.com/2014/03/motherhood-mondays-baby-food-an-epiphany/

Smitten Kitchen has a few posts on baby food from when her kids were babies, as does Luisa (author of My Berlin Kitchen and the website The Wednesday Chef). We enjoyed most of those.

Hi Jules – I hear you when you say you’re not ready for BLW and you 100% do you, but just in case it’s something you’re interested in further down the line, I really recommend reading the Gill Rapley BLW book. It helped me so much to feel less intimidated/anxious about feeding my kids in general. For what it’s worth, I have two kids – both introduced to solid foods in an identical BLW manner… one eats everything, one is a super picky eater and always has been, so I would take the ‘this will make sure your kid isn’t fussy about food’ side of it all with a gigantic pinch of salt, but even just in terms of really helping me not stress about what my kids were eating/trusting them to figure it out for themselves, the overall ‘philosophy’ was so helpful for us.

Check out https://solidstarts.com. IT IS AMAZING!!!

This Canadian book has been often (and happily) gifted and received among my circle over the years: https://www.chapters.indigo.ca/en-ca/books/better-baby-food-your-essential/9780778801955-item.html

Thanks so much ladies! These are great

Definitely trying my hand at these. May try smashed chickpeas and a bit of whipped aquafaba to replace at least half the bread crumbs.

This sounds fabulous!!! Adding it to my meal plan for the week :)

A friend made these at New Year. Unbelievable.

I love eggplant, but my family struggles with the texture. I’m going to make these for Sunday dinner this weekend, maybe with added toasted/chopped walnuts or pinenuts, for a little extra somethin…

Looks good. Wondering how the balls stay stuck together, is there no binding agent?

This is a question I always have because we have an egg allergy in the family. I was hoping the “magic” binding agent would be called out in the recipe so I could use it in other meatballs (vegan and non-vegan).

The breadcrumbs are the binding agent. They basically absorb the extra moisture and allow everything to be in a ‘ball. Other common binding agents are potato, sweet potato and other tubers.

I LOVE Cooking for Peanuts (Nisha) and happily pre-ordered this book as soon as she announced it, and picked it up a few days ago. Her recipes are approachable, easy, and most importantly delicious! So happy to see this on Cup of Jo today. I’ve been making her recipes for my family for a couple years now, and definitely recommend the cookbook. And I’m not vegan or even vegetarian. Just trying to eat more plant-based meals. Yum!

This is a long shot question, because searching for a substitute for the titular ingredient is generally a sign to just choose a different recipe. BUT… my partner is allergic to eggplant (what a bummer, right?). Can anyone think of some other vegetable that would remain cohesive and tasty for this recipe, albeit not in the same way as eggplant? Summer squash, maybe?

Summer squash may be a bit watery, but winter squash (acorn, butternut), or sweet potatoes, or lightly smooshed lentils/beans could be good substitutes?

I would try portobello mushrooms as a substitute?

Basically you can use any veggie. If it has a higher moisture content like zucchini, wring out the water. But common options are potato and peas, sweet potato and greens, mushrooms, etc.

That is so much garlic! Count me in!

Ooooh, yum, what a clever way to use eggplant! I will bookmark this for when the summer eggplant return to the farmers’ markets here.

Ooooh, I would make this! If a dish lands in both the *healthy* and *delicious* categories, it’s an absolute keeper. This cookbook could be full of keepers. And I’m not a vegan!

You definitely don’t have to be a vegan to enjoy this book, in fact it was written for people exploring cooking without animal products

I went vegan back in October and have been struggling with a food rut ever since. This cookbook sounds like just the ticket!

Yay for becoming vegan, Yelena! I’ve been vegan for a year now and def had a few ruts. Here are some cookbooks (excited to check out Practically Vegan ,too) that are full of vegan flavor feasts — Mississippi Vegan, Sababa Israeli Kitchen (not vegan but some fabulous vegan-izable recipes), Trejo’s Tacos (also not vegan, but lots of fabulous sauces and marinades that are vegan and make ingredients like mushrooms, tofu etc incredible entrees). Enjoy!

Thanks for the recs Mel! I’m always eating avocado toast for lunch and roasted veggie bowls for dinner so these should definitely give me some inspiration! I’m also super lucky that I live in Southern California where true to streotype there are a ton of plant based restaurants!

Hi Yelena– I was in a similar boat a few years ago. I found Vegan Richa’s blog really helpful to discover new flavors and ways to approach a meal, so she might be a good resource to check out too!

The Weekday Vegetarians: 100 Recipes and a Real-Life Plan for Eating Less Meat: A Cookbook
https://amzn.to/37pxKDw

Thank you Charlotte and Jane for the great resources! I’ll definitely do my homework and check these out :)