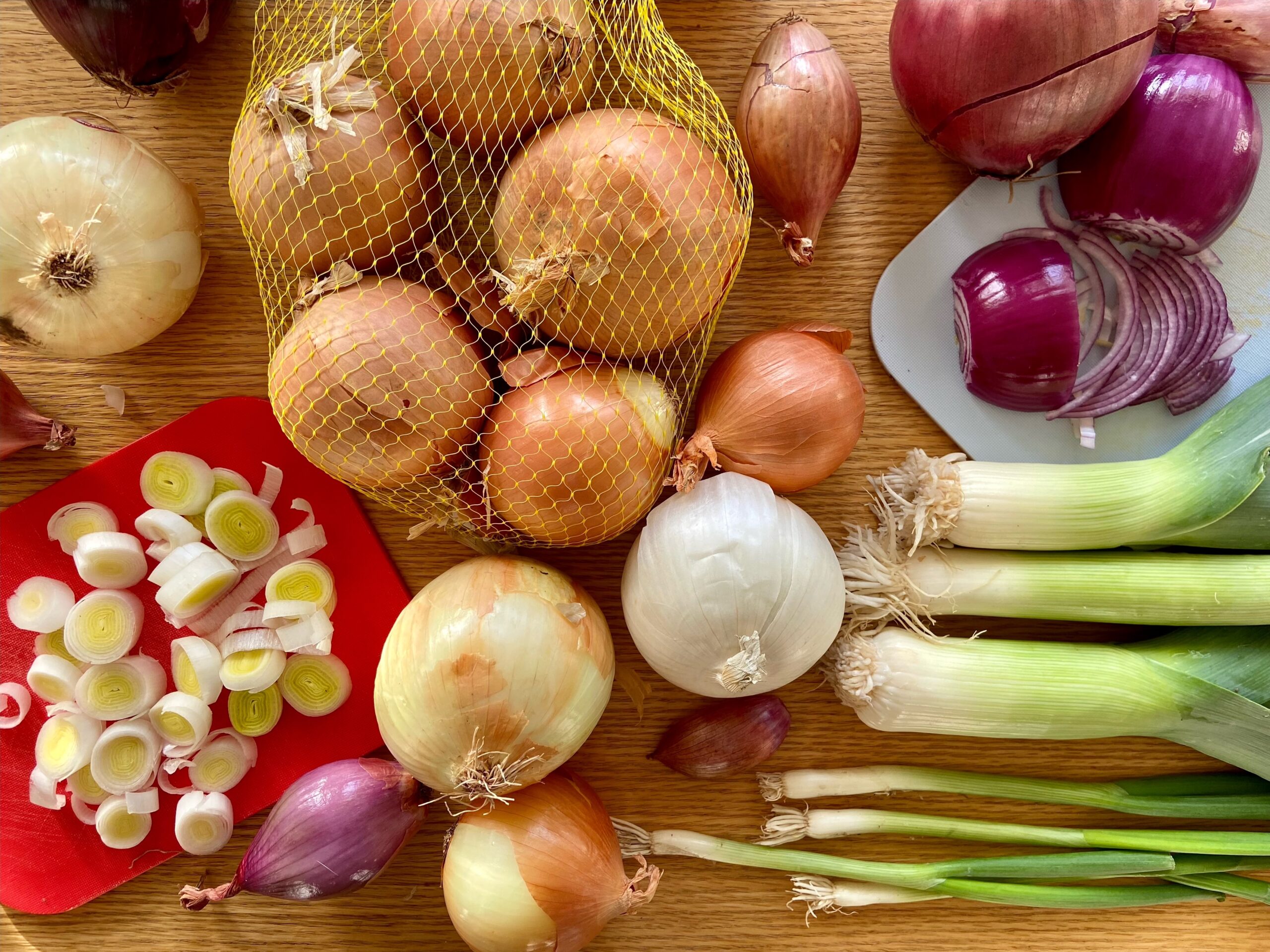 Last week, Cup of Jo reader Kris asked if we could talk about different kinds of onions and the best ones to use for which recipes — and I’m so glad she did. I usually have some combination of the six main varieties you see above, but use them interchangeably when I have to, and I’ve always wondered what the food police would say about this. The answer? It’s not a big deal, but, not surprisingly, there are definitely specific recipes that call for specific onions for very specific reasons.

Here’s a rundown for you… 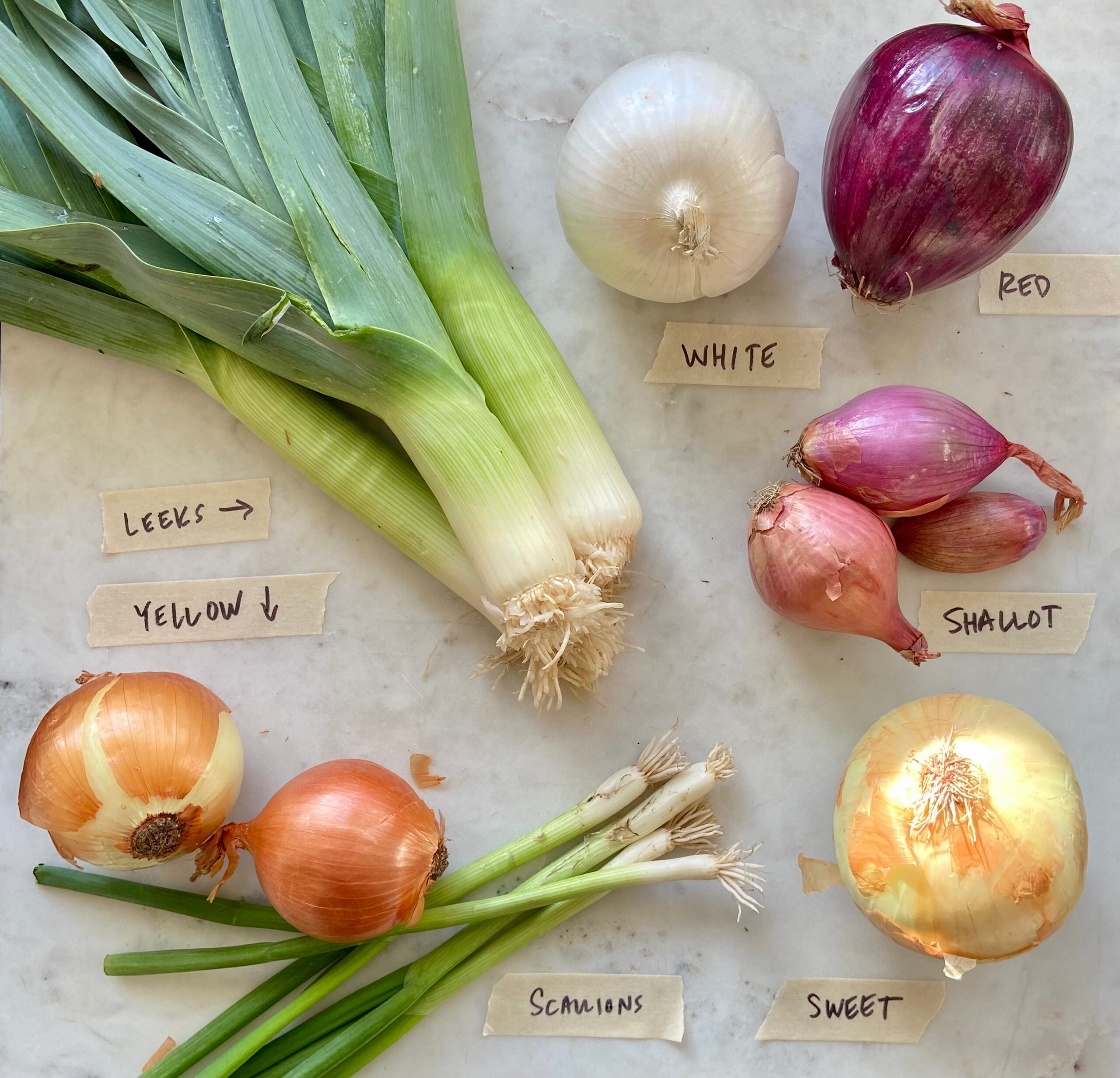 Yellow Onion
When a recipe calls for an onion, this is usually the kind it means. It’s the workhorse you should pick up by the sackful at the supermarket (they can last 2 to 3 months when stored in a cool, dry place) and with its strong flavor (which mellows out when cooked) a dependable aromatic base for soups, stews, stocks, roasts and braises. They are the premier onion for caramelizing.
Start with: Pasta with Yogurt and Caramelized Onions, Cauliflower and Onion Gratin, Broccoli Soup

Red Onion
Red onions are slightly more biting than yellow onions — some say “spicier” — but still sweet, which is why they are commonly used raw. (You can soak them in water for a few minutes to reduce the bite, if you prefer.) Their vibrant hue also makes them popular for visual flourishes, sliced onto sandwiches and burgers; pickled into a versatile garnish; or minced and tossed in salads.
Start with: Pickled Onions (scroll all the way down), Kale Salad

White Onion
This is a sweeter, more mild onion than red or yellow, and therefore best deployed raw and in small doses, like in pico de gallo, salsas, and guacamole. (They’re popular in Latin and Central American cuisine.) I’m embarrassed to admit that I only recently started adding them (in very thin shaves) to my guacamole instead of red onions, and I’m now addicted to the little bursts of crispy sweetness.
Start with: Guacamole, Fish Tacos with Pico de Gallo

Shallot
Probably the most versatile of the bunch, these smallish bulbs are more delicately flavored than most onions, and delicious minced into salad dressings, roasted whole, or fried and frizzled to be sprinkled on soups and stews.
Start with: Ottolenghi’s Miso Butter Onions; or add finely minced shallots to any of these dressings

Scallions
Also known as green onions, you can’t put these slender alliums into any one box. They are mild, crispy and pretty, making them a go-to garnish onion. (My stir-fry dishes, green salads, grain bowls and chilled soups feel naked without them.) But also, they’re just as dependable as a flavor builder when cooked (into a stir-fry with their besties ginger and garlic) or when charred (and used as a topping for pizzas and creamy soups) or baked into biscuits or scones.
Recipe: Arugula Salad with Chicken and Mint, White Pizza with Scallions and Egg, Cheddar Biscuits

Leeks
Most recipes will call for leeks the way they call for regular onions — as a flavor builder — but they are more delicate, and, in my opinion, both pretty enough to be a stand-alone dish and distinct enough to earn headline status in recipe names. Of all the onions in this round-up, these are the ones I have the most fun with, the only one I would categorize as “muse” when I’m developing recipes. Only downside: They can be a pain to clean.
Recipe: Potato-Leek Soup, Beans and Buttered Leeks, Simple Braised Leeks

Sweet Onions
These aren’t necessarily sweeter than regular onions, but they contain less sulfur than most so are not nearly as pungent. Think of them as more of the main show than a supporting character — in other words, think of them for onion rings. Walla Walla, Vidalia, Maui are all varieties of sweet onions, named for the regions where they grow.
Recipe: Onion Rings

Thanks for the question, Kris!

I’m confused when a recipe calls for a “Spanish onion.”

Making a french onion soup now with red onions (out of regular ones)- does it make a difference for caramelization purposes?

The link to the Pasta with Yogurt and Caramelized Onions doesn’t appear to work. Sounds amazing. Would love to have the recipe.

Leek cleaning hack! David Lebovitz’s method never fails. We get lots of leeks in our CSA share which often means they’re even a bit dirtier than the ones in the supermarket, and this is the best method I’ve found.

I don’t know if these are in the onion family, but I think chives are such an underrated alternative to scallions. Bonus (for me) is you can easily rip them up instead of chopping if you don’t feel like dirtying a knife :)

Reading this was the same as fiiiiiinally doing that tiny task you’ve put off for months. I feel SO much better knowing all of this, haha

That’s how I’m feeling too! Excellent way with words, Sarah. 🙌🏻

Why are shallots so expensive?

This is sooooo helpful, thank you!!!

Super helpful!! I always wonder what onion to use in recipes…now I know! Thanks!

thank you so much! i’m so excited to use the proper onion in the appropriate recipe :) i’ve always wondered why sometimes my onions weren’t always as caramelized as “that other time”, why raw onion is sometimes refreshing and sometimes offensive, why sometimes onions didn’t add the touch I thought they would to a sauce…this is so helpful!

Omg!I ask myself the “which onions to buy” question every time its that time to restock my last bunch!Thanks for this guide

I am 62 and have never bought/cooked with shallots or leeks! And I cook a lot! I’m embarrassed to admit that ——
Who knew that my spring goals would include alliums? :)

I actually always use sweet onions in place of yellow onions in recipes, because I’m never mad at the sweetness and mildness.

I actually find cleaning leeks to be meditative! I slice them lengthwise, root to stem, so the leaves stay connected at the root/bulb and the halves don’t fall apart. I hold each half at the base and run cold water on the leek while gently pulling apart the layers. I actually don’t find much grit/dirt beyond the 2-3 outermost layers.

I totally agree! That’s exactly what I do! I love leeks!!!

Wow, the guide I didn’t know I DESPERATELY needed. Thanks!

so helpful!! thank you for this post. We always have a bowl of marinated red onions on the counter (Nocrumbsleft receipt). They are delicious on salads, avocado toast and so much more!

Hot tip (ha!): I will often elect for the compact and dual garlic/ onion properties of a shallot when camping.

Also, ottolenghi’s leek dish is a regular go to in my house, sometimes adding chickpeas, crusty bread, or polenta cubes to boost the meal. My memory-challenged partner is blown away by how good this is vs what he expects from looking at it. Lol

I actually just made this last night! Huge leek fans in this house!

THANK YOU! I would love some more guides like this (for basic cooking staples) in the future! I’ve always cooked by following recipes exactly. But, I’m trying to get more comfortable with just knowing how ingredients will work together (without always needing an exact recipe).

Yes please, seconding this! Like varieties of rice/lentils/grains in general? My mother always used the same “white rice” grain when I was growing up and finally figuring out my favorite Indian restaurant rice is in fact basmati rice (soaked/rinse and cooked in a gifted rice cooker) has been an absolute game changer for me in the kitchen! Or combos of spices/ingredients? As mentioned above, sautéing green onions, garlic, and ginger (along with a hot pepper of choice) in hot avocado oil has made stir fry a weekly go-to for my family! What else, I loved the piece you had about what pasta goes with what sauce, controversial but helpful none the less!

Yes!!!! Another idea would be different ways to cook eggs or knife skills.

@garlicpressjess on IG/sign up for her newsletter is your girl! such great foundational tips for “intuitive cooking” as she calls it.

I have two cookbooks that helped enormously with building my ability to cook creatively: “How to Cook without a Book,” Pam Anderson, Broadway Books, 2000, and “Salt Fat Acid Heat,” Samin Nosrat, Simon & Schuster, 2017. The first one gives basic recipes with lots of variations, as well as detailed explanations for how each recipe works, and the second book explains how the elements of flavor in food work together.

My SIL once made me a huge pot of bolognese sauce, the type of recipe you simmer for hours. That stuff was so so sweet – almost like a sweet tomato drink! It was delicious but not typical for the recipe. She was so baffled as to why but then realized she had used sweet onions instead of yellow. So maybe if you have enough of them and they cook for long enough, they are indeed sweet?

A PSA for anyone who stores their onions with their potatoes (the way my mom always did) – the moisture that onions release is enough to make the potatoes spoil more quickly, so always store onions separately!

THANK YOU FOR THIS!! I had no idea why my potatoes always go bad so quickly!

Here’s my hot tip for cleaning leeks- chop on a washable cutting board, THEN wash in a salad spinner. No more grit!

My tip exactly! So much easier when they’re cut up! Bonus points if you let them soak for a bit in the salad spinner bowl before rinsing. Super easy.

Great post!
Love all onions.
The way I clean leeks is to soak them in my salad spinner, change water several times, them spin them.
Then I make Lamb and Leek Stew

On an episode of “Frasier” way back when in the 90s, he was cooking (I don’t remember what), and he said, “… and of course our old friend, the shallot!” I remember thinking, “Wow, when I cook with shallots, I’ll know I’m grown up.”
(PS, I guess I’m finally a grownup at almost 40 since I always keep shallots at home?).

I dice up my leeks and then just wash them in a colander under cold water. If they are really dirty I will soak them in a pan of water first. I’m not sure why all these cooking sites say to wash them whole — we’ll, YEAH, they are very hard to wash if you do it that way! Is there some advantage to washing them first that I don’t know about.

Also, I like to sautee a bunch of leeks (including the green part, it just needs to cook a bit longer) in butter and garlic and add them as a filling to savory crepes along with some sort of nice cheese. My in-laws will often serve a bunch of braised leeks as a side dish for beef cheeks or some other kind of heavy meat. It really is the perfect side dish.