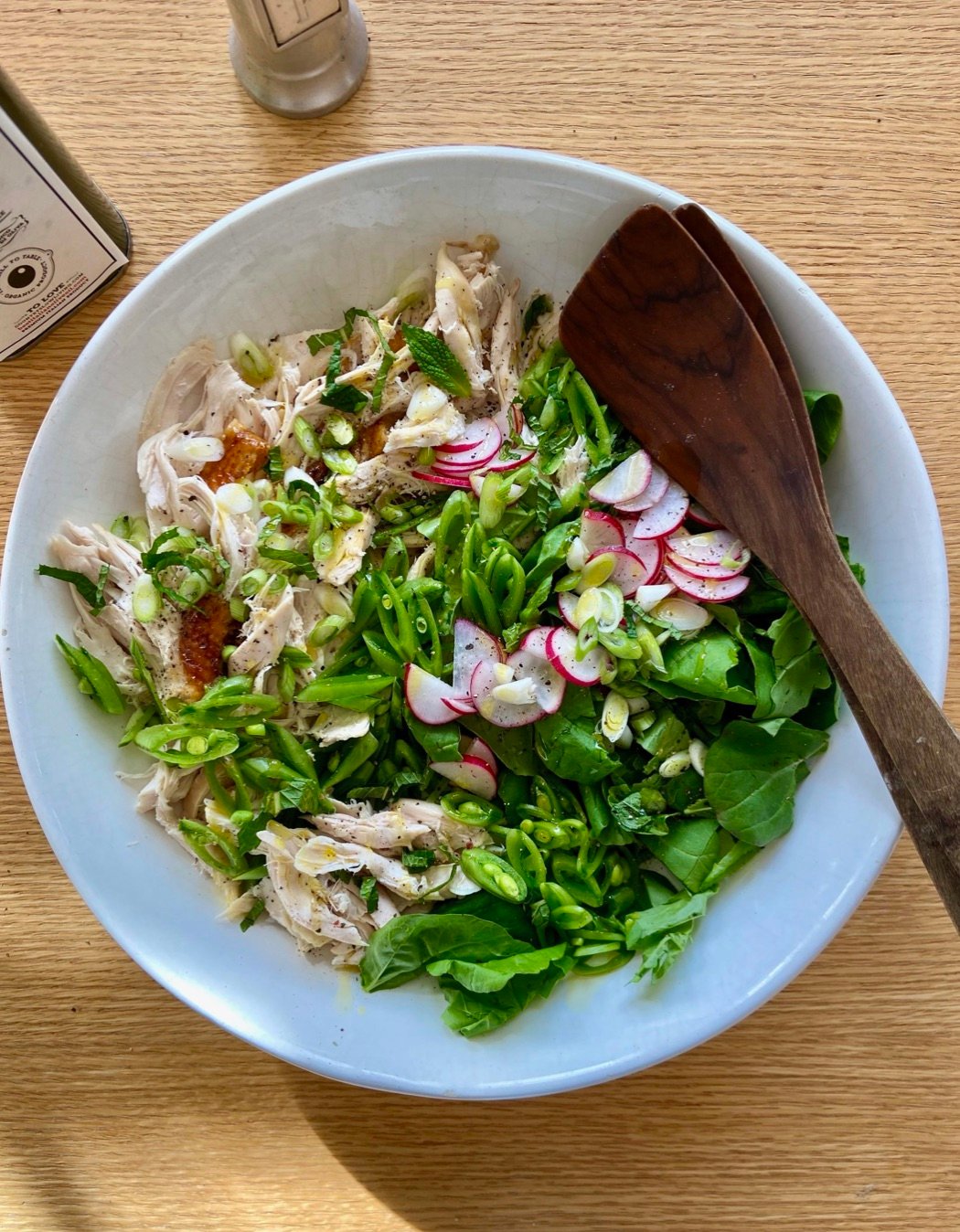 It’s the first week of spring, which can mean only one thing…

…or, well maybe five or six things: asparagus, peas, mint, artichokes, mushrooms, greens that taste like greens, the small, sweet signs of hope and promise at the dinner table and beyond. Here are a few ways I plan on wielding their considerable powers over the next few weeks.

Arugula Salad with Shredded Chicken and Mint (Above). Using two forks, shred a store-bought rotisserie chicken and place into a large bowl. Toss with chopped sugar snap peas, a handful or two of arugula (you want the arugula to be an ingredient, not a dominating base), chopped fresh mint (crucial!), finely chopped radishes, a bunch of minced scallions, salt and some meaningful grinds of black pepper. Toss with a glug or two of olive oil and a few splashes of soy sauce and rice wine vinegar.

Risotto with Mushrooms, Leeks, Peas, Egg. Cook mushrooms (morels if you can find them) in olive oil in a skillet set over medium-high heat. Cook until all their liquid has been released, about 10 minutes; remove and set aside. Meanwhile, in a separate deep skillet, set over medium heat, heat a little butter and olive oil. Add chopped leeks (one leek should be fine; you could also use an onion or shallot), salt, pepper. Add 1 cup arborio rice and toss until every grain glistens. Turn heat up a little, and slowly add about a half cup of vegetable or chicken broth at a time, stirring every few minutes as the rice absorbs the liquid. Once the liquid has been absorbed, continue adding broth until 4 cups total has been absorbed. (This should take about 30 minutes.) Turn heat to medium-low, add shelled peas and mushrooms, stirring until the vegetables are warmed through, about two minutes. Top each serving with a 7-minute (or fried or poached) egg.

Asparagus Pizza. Heat oven to 450°F. Press and stretch a 16-ounce store-bought pizza dough on a baking sheet brushed with olive oil until it reaches the edges of the pan. (You want the crust to be thin.) Top with 1/2 cup grated cheese such as Parmesan or mozzarella. Toss trimmed and chopped asparagus and chopped red onions. Add vegetable mixture to the pizza dough, then bake for 10-12 minutes, until dough is crispy and golden. Optional serving: Dollops of ricotta, mint and more Parm.

Ravioli with Lemony Peas. Prepare your favorite store-bought cheese ravioli (if you live near an Italian specialty store, now is the time to hit that), according to package directions. Drain, reserving about a quarter cup of pasta water, and immediately (gently) toss with a drizzle of olive oil in the strainer. Place the pot back on the stovetop and turn heat to medium-low. Add a few tablespoons of butter, a handful of peas and toss in the ravioli. Add grated Parm, the zest from half a large lemon, and a small drizzle of pasta water, tossing (again gently) to help the cheese distribute. Optional: Serve with fresh mint. Note: Artichokes would be wonderful in this, too. 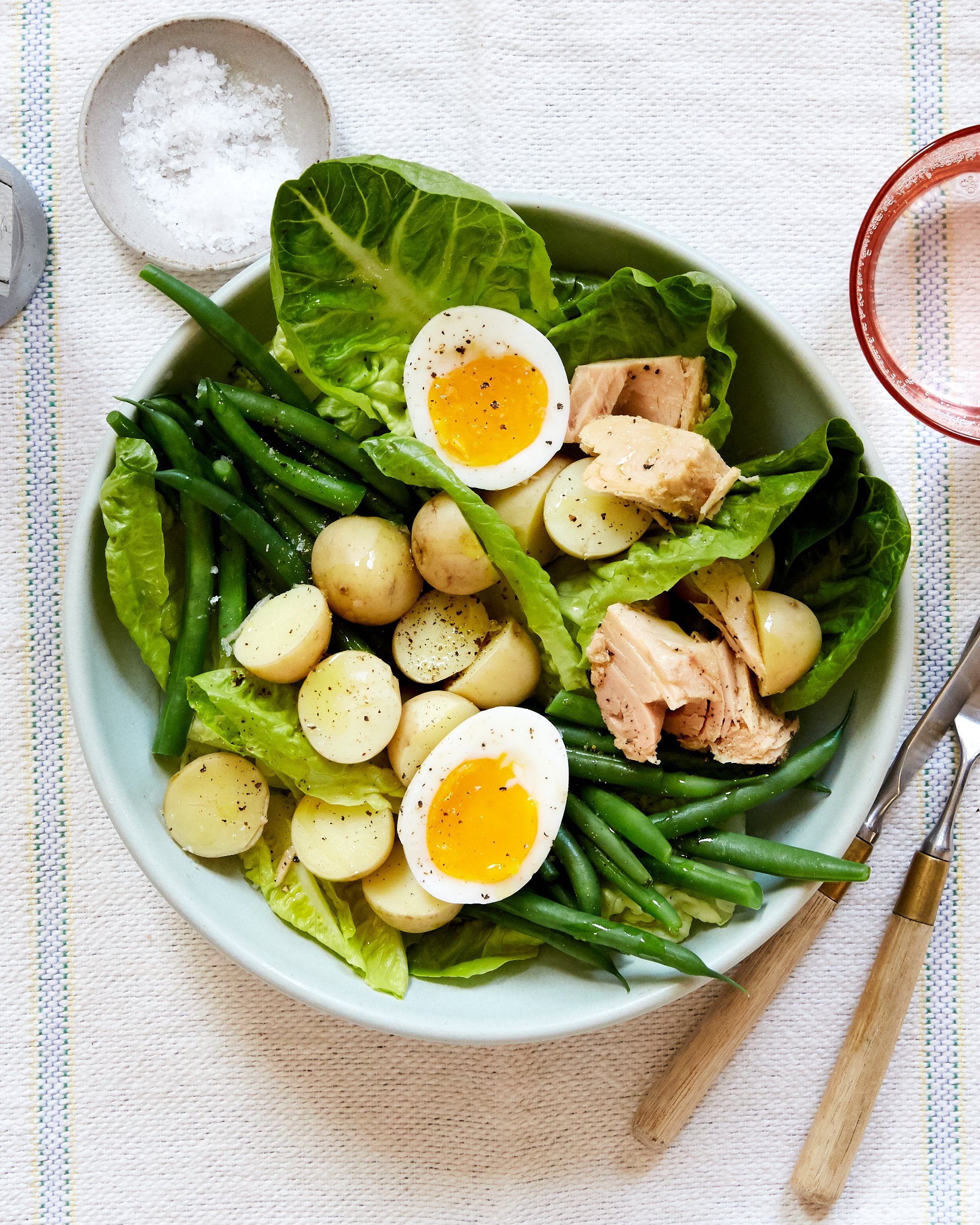 Tuna Niçoise-ish Salad with Asparagus. Replace the green beans in this Five-Ingredient Meal with cooked asparagus. (Simmer trimmed stalks for four minutes, then immediately plunge in an ice bath.)

Roast Salmon with Minty-Pea Mash. Preheat oven to 425°F. Brush a 1 1/2 pound salmon filet with olive oil, salt and pepper. Roast for 15 minutes until the top is golden and the thickest part of the fish feels firm-tender to the touch. While it roasts, sauté shelled peas in butter with a few tablespoons chopped onion, plus salt and pepper. When warmed through, about 3-4 minutes, remove to a bowl, add a handful of mint, a drizzle of olive oil, a squeeze of lemon, and smash with a fork. Serve alongside salmon. (Alternately: Try this pea-mash alongside simply seared scallops, too.)

Strawberry Salad with Feta and Beans. The combo may sound strange, but it’s a favorite in our house, and, if you use canned beans, it’s strictly an assembly job. Toss greens (spinach, arugula, butter lettuce, or any combination of them) with sliced strawberries, crumbled feta, chopped mint, drained canned white beans (such as fava, gigante or navy), and a white wine-based vinaigrette. It goes without saying that fresh fava beans would take this from good to great, but, as anyone who’s ever shelled and prepped a fava bean knows, the meal would no longer qualify as fast.

Deviled Eggs with Garlic Bread. Preheat oven to 400°F, then prep your eggs: Place 10 eggs in a large pot, cover with water, bring to a boil, then immediately remove from heat and cover; let sit exactly 10 minutes, then run under cool water. Make your garlic bread while they cool: Slice a baguette in half lengthwise and spread butter on both sides. Sprinkle the baguette with a little garlic powder and salt, wrap in foil and bake in your preheated oven for 10-12 minutes. Prepare your deviled eggs (this is a classic) and serve with pickled anything (bread and butter pickles, capers, pickled onions, etc), sliced garlic bread and a simple salad. 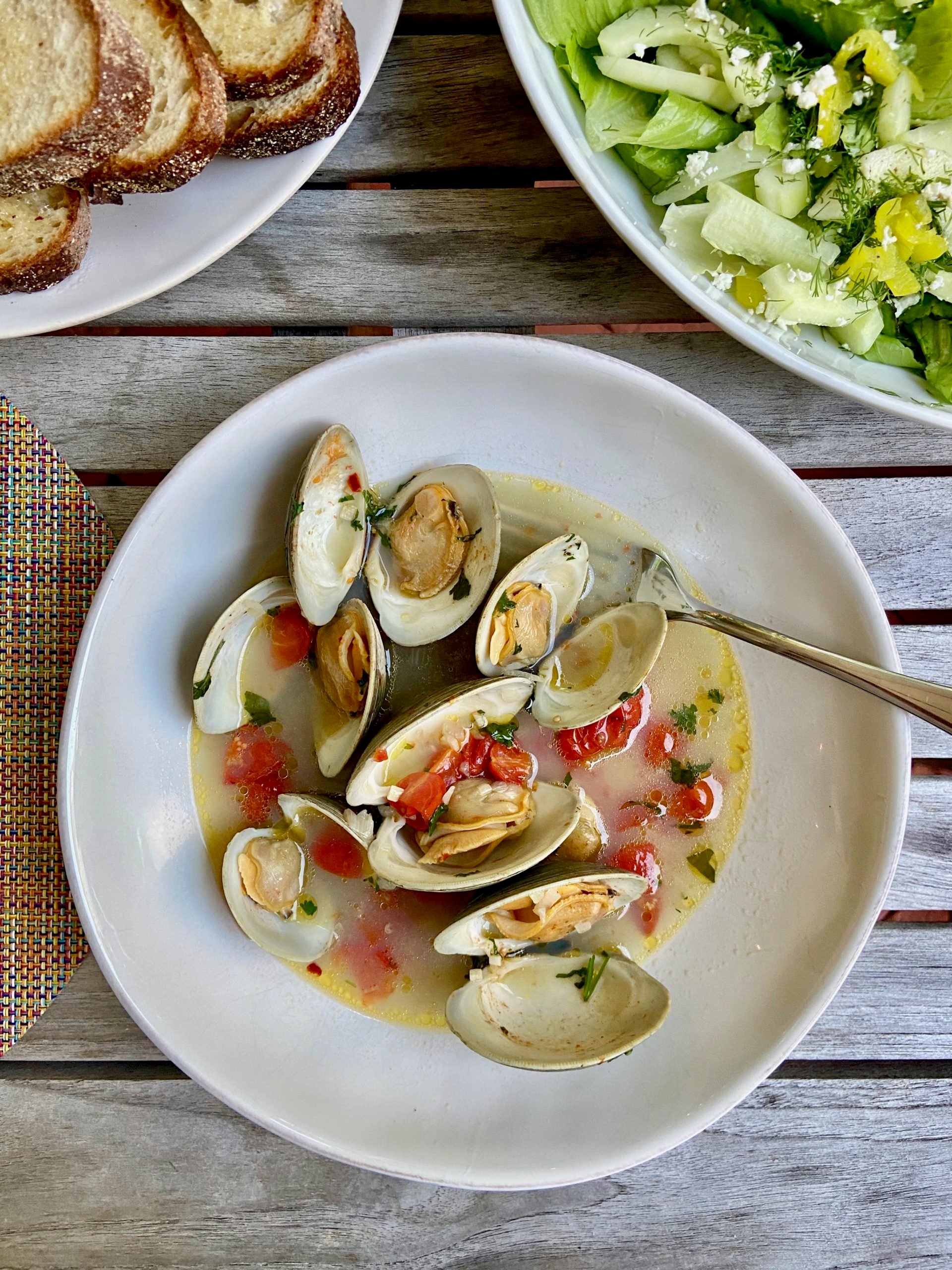 Brothy Clams with Spring Greens. The hardest thing about this dinner is securing fresh clams, but once you’ve got them, you’re on the way to about as light and simple a meal as it gets: In a Dutch oven set over medium heat, sauté some shallots, garlic, red pepper flakes and freshly ground pepper in olive oil. (No salt!) When shallots are soft, add clams (think about 6 to 8 per person) and a third cup or so of dry white wine. Cover and reduce heat to medium-low. When the clams steam open, about five to ten minutes, add a few handfuls of chopped tomatoes, some fresh herbs (parsley or basil) and simmer another two or three minutes. Discard any clams that haven’t opened. Divide clams evenly among bowls, ladling the delicious broth on top. Serve with sliced, crusty bread for sopping and a butter lettuce salad that’s been tossed with herbs, lemon, olive oil, and white wine vinaigrette.

Orecchiette with Butter, Spinach and Crispy Shallots. Cook pasta according to package directions. Drain and place pot back on stove over medium-low heat. Add butter, sliced shallots (from two large shallots), and olive oil and cook until shallots are crispy and golden. Add a large mound of spinach and cook until wilted. Toss with drained pasta and a little more oil. Serve with Parm.

What do you plan to cook this spring?

P.S. Spring salad with chicken and lentils and nine cooking steps you should feel free to skip.