A (Socially Distanced) Wedding in Brooklyn 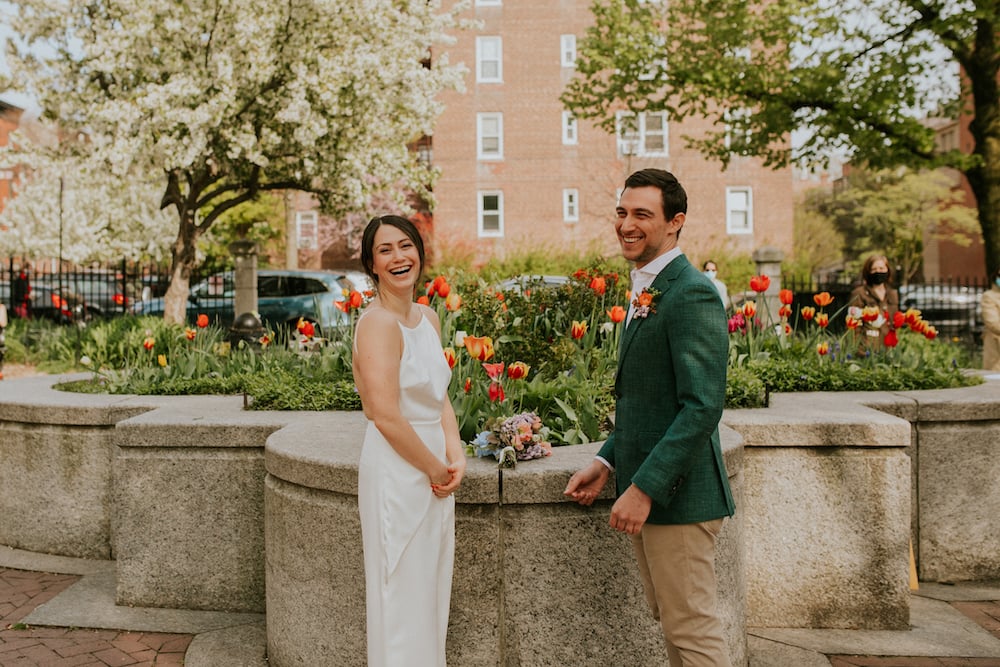 When their big wedding had to be cancelled, Melissa and Robby decided to get hitched at their neighborhood park, with strangers cheering them on. Here’s how it went down… 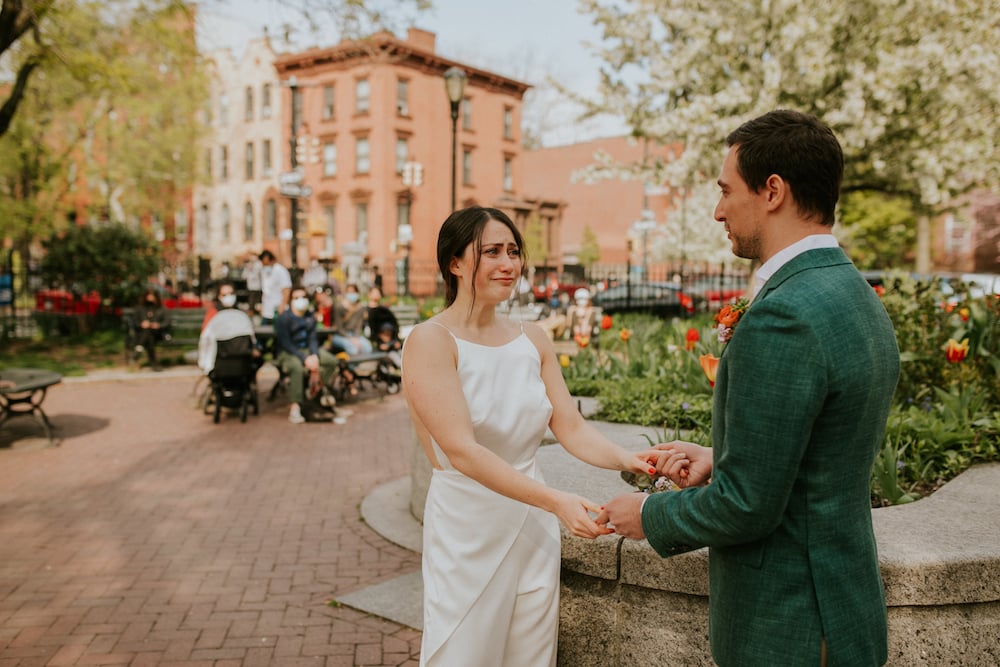 “We were supposed to throw a big wedding in Greenpoint on April 25th but we had to cancel. The few weeks before, we thinking about what we wanted to do to make that day special — we didn’t want it to be a bad or negative day. But after the stay-at-home order came out, we thought, we should just really get married on April 25th.” 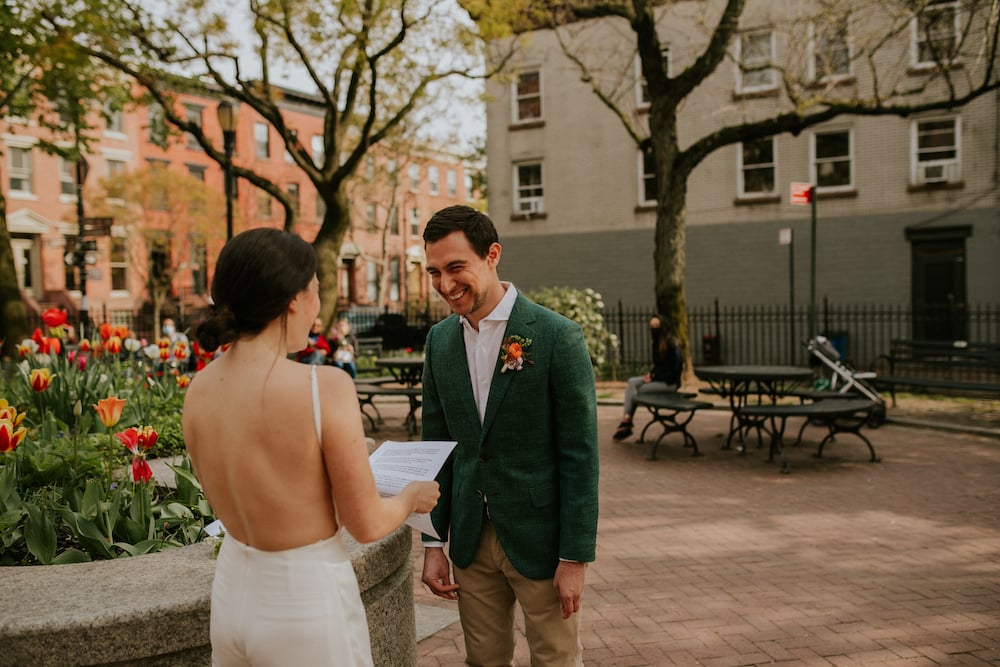 “My brother officiated the wedding through Zoom. Our immediate family was watching on Zoom, too, including his grandfathers who are both over 90. I wore a backless jumpsuit from the bridal salon Sarah Seven. It was supposed to be my rehearsal dinner dress, but it turned out to be a showstopper!” 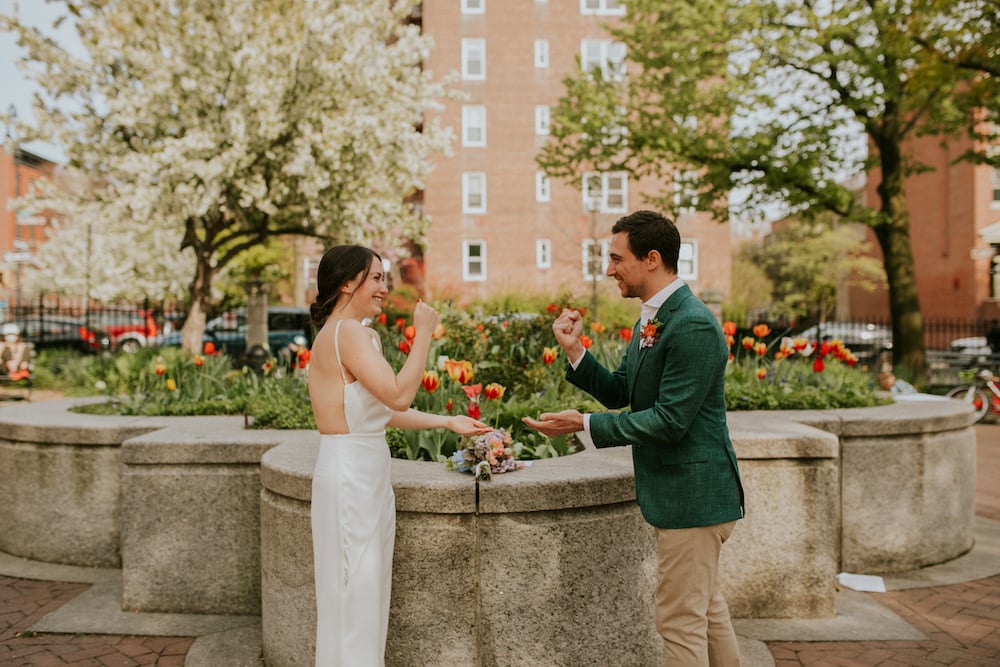 “We did rock paper scissors to see who would do the vows first. We wanted to insert joy in all these different ways.” 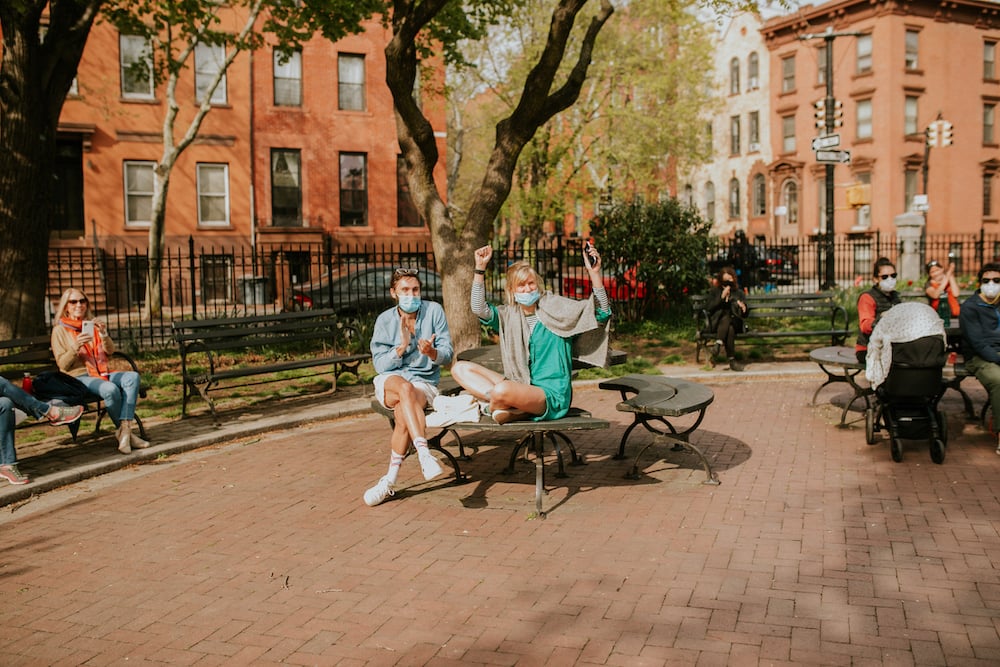 “Everyone was being respectful and social distancing. People who didn’t know us were watching our ceremony. Making a commitment in front of this community felt really special, like we were bringing joy into the neighborhood. People were saying, ‘Thank you for letting us bring our baby to his first wedding!’ and ‘This made our whole day!’ Strangers connecting is such a part of living in New York.” 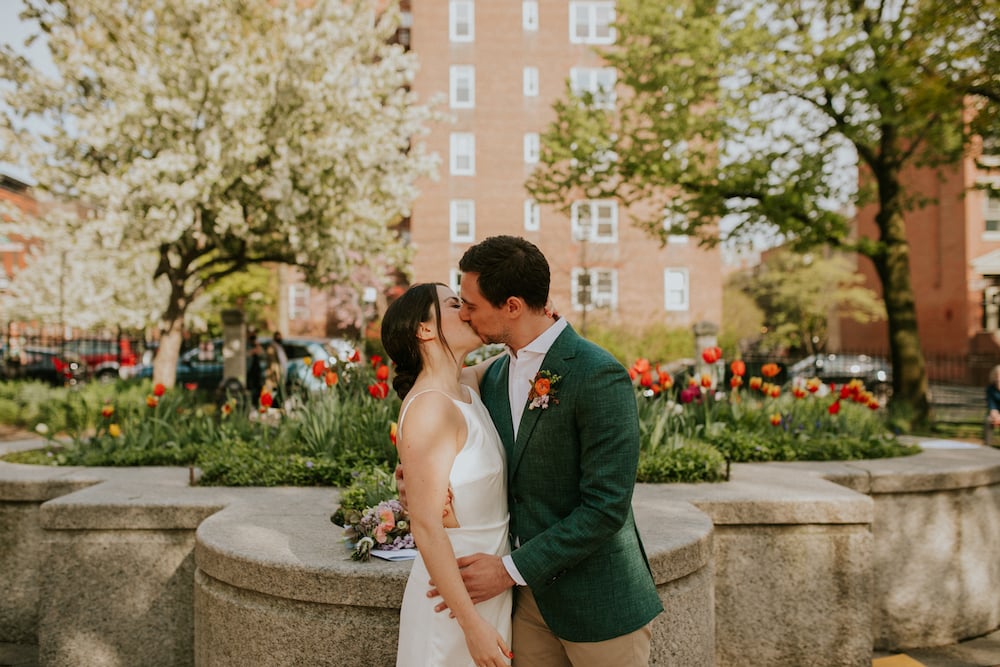 “After the ceremony, we played ‘There Will Be Everlasting Love.’ People started dancing with us at a distance. We popped a bottle of Champagne. 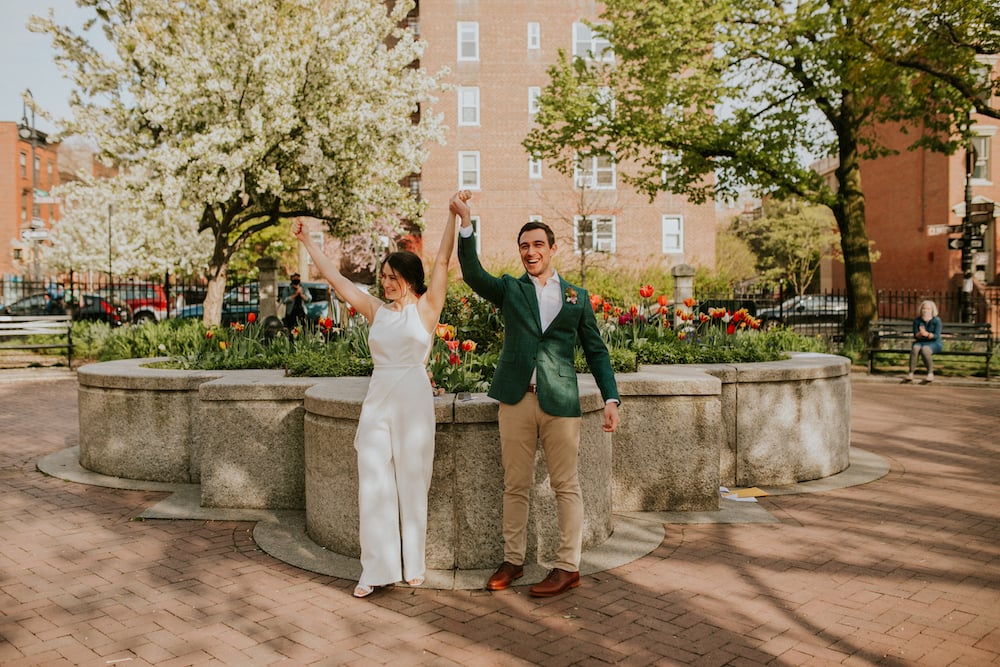 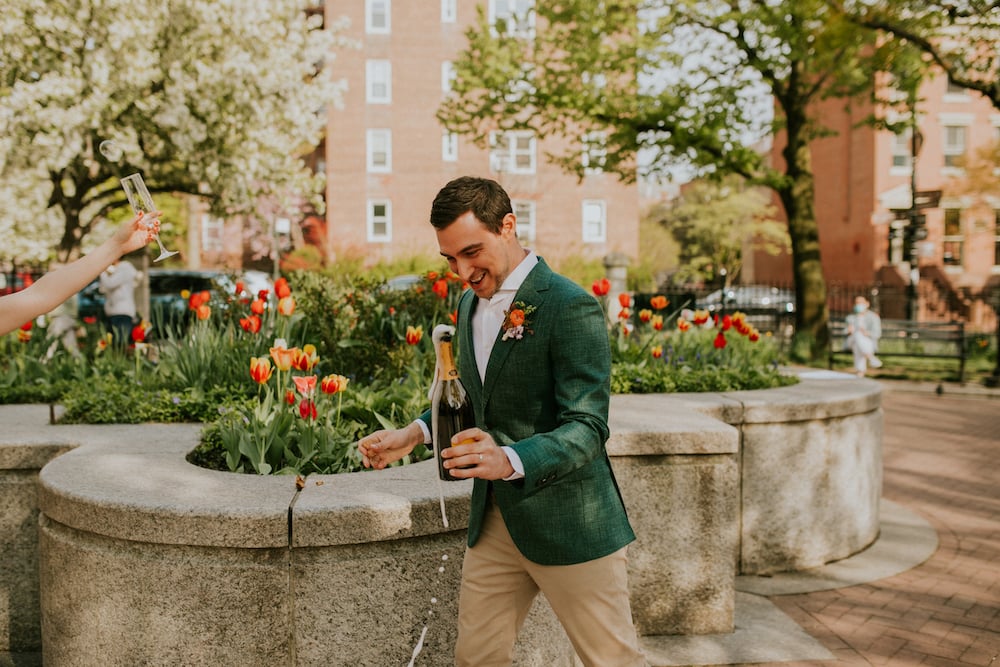 “The day was so much more special than I ever thought it would be. I feel like I’m going to cry again! Starting in late February, I was worrying so much about canceling our wedding, but being able to stand in front of this person I love so much and commit to him and have him commit to me was one of the most beautiful things.” 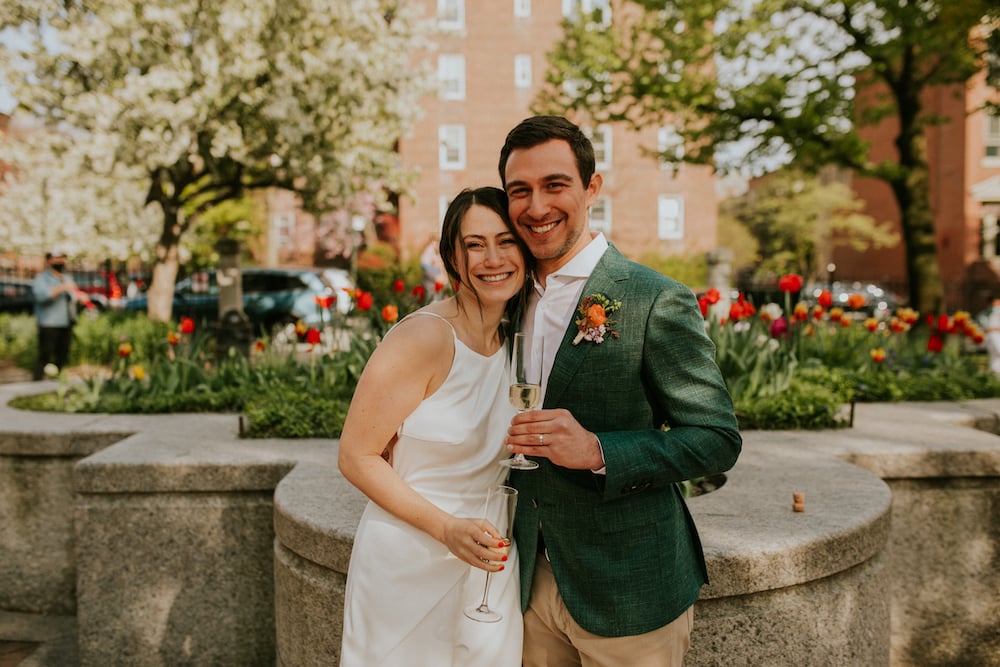 “Even after everything we wanted was thrown out the window, to have this beautifully simple wedding felt perfect. It was even more powerful than what we had originally planned.”

Thank you so much, Melissa and Robby! Here’s another quarantine wedding, if you’d like to see.

107 COMMENTS
WRITE A COMMENT
Relationships
most popular
01
Seeing My Body With Fresh Eyes
02
11 Wedding Dos and Don’ts
03
How to Write a Condolence Note
04
A Love Letter to My Anti-Anxiety Medication
05
How to Be a Better Listener
May We Suggest…
By Caroline Donofrio
Relationships
12 Hilarious Wedding Bloopers
February 4, 2020

162 COMMENTS
By Kim Rhodes
Relationships
Which Songs Would (or Did) You Choose For Your Wedding?
March 12, 2020

324 COMMENTS
By Joanna Goddard
Relationships
Would You Do a Wedding First Look?
July 9, 2020

This is beautiful! Congrats!! We got married in a park in 2018. It was all sorted, we even paid a hire fee and could decorate the trees with origami strands. But as I pulled up to meet my groom, I saw there was a kid’s party happening in the park and house music pumping from the house across the road. I was a little sad. But it was PERFECT. The partygoers all turned their chairs to watch, the music was turned off and I saw people watching us with binoculars from the surrounding apartments. They all cheered at the end!! It was such a personal and tender moment and the whole community shared it! We heard our wedding spoken about across the neighborhood!

This is so lovely! We had our “pandemic wedding” at a secluded mountain farm this summer with just our parents, but this certainly makes me see the joy in sharing your day with strangers. (Will also echo what so many others have said: it makes me miss NYC too.)
Even though it feels like we missed out on so much, I’ve also been thinking about how couples who got married this year will certainly have a unique story to tell years from now…

So beautiful! Cheers to you both! ✨

Their happiness is beautiful. I wish more weddings were this simple and joyful.

Gosh I love everything about this story, including the NYC community! Early this year I moved from a large city to a rural town, and while I am so glad I did, and had been planning it for awhile, every time I went to NYC I always reconsidered just moving there instead! Love that city and can’t wait to go back.

My husband and I and our newborn baby were some of the passerby’s at this wedding! Can see us sitting here at the picnic table :) Was not expecting to see myself on COJ tonight haha.

This was such a spark of joy in the middle of such a crazy time and we felt so lucky to share in this amazing moment. They had signs to say if you took pictures of the wedding to send their way, which I thought was very special.

Gosh I just love Brooklyn and the NYC community. My husband and I are Irish living in the UK. In October 2016, 12 of us flew to NYC where we got married next to Jane’s Carousel. The whole day was magical but it was made even better by the locals of Brooklyn who would stop us in the street to wish us all the luck and happiness in the world. People literally stopped their cars to shout out the window to us, children came running up, strangers took photos with us and bought, and one person, whose name I never got, insisted on helping me into a taxi, carefully carrying my dress. It was the best day ever. I yearn for COVID to be over so we can fly back over!

Oh, I cried reading this. I feel so lucky to have gotten to read this and experience your day through this post. Congratulations and thank you Melissa and Robbie. And thank you Joanna. XO

This is very sweet. The officiate was on Zoom. Does anyone know how that works in legal terms? Do they need to go to city hall at a later date to make it official? Or is that it, they are married? Here in the Uk, you would have to do that. Mind you in England you can’t get legally married outside – the couple have to be under a permanent roof of some kind, in a registered location.

I’m Irish living the UK and got married in the US. Once the officiant signs your paperwork you then have to go to three different offices to get it all authorised. It sounds like more work than it is, but we sorted it all out the day after our wedding. The best thing about getting married in NYC is that you can get married practically anywhere!

These are probably my favorite wedding outfits ever. This looks like a movie. Congratulations!!

Gorgeous. They both looked beautiful as well! Really like the groom’s green coat.
It must’ve been such a memorable, special day for all the onlookers as well — what a heartwarming moment of community.

This is so lovely! Congratulations!

This is lovely! She is gorgeous, he looks dapper, and they look like they’re matching the beautiful flowers and city backdrop on purpose. Gorgeous pictures, and it seems like it was such a fun, sweet, perfect wedding!

Congratulations! This makes me miss New York a lot! My best friend married her wife a couple of weeks ago on Rockaway Beach in a tiny little “replacement” ceremony. A random onlooker who was practicing with a drone stopped and offered to take some videos for them, AND a NY State legislator stopped to congratulate them because he had fought for legalizing same-sex marriage in the state!!! New York is so awesome.

This warms my heart. As a pandemic bride myself, this year has been really hard (and complicated since there’s already guilt around weddings being frivolous to begin with…), so I love seeing how others made it work. We canceled our May 2020 wedding, but when we realized we couldn’t reschedule our original large wedding for the foreseeable future, we chose to have a small ceremony in our tiny Washington, DC “backyard” with 15 of our friends and family on our three-year anniversary. I never thought I’d walk down the aisle in our gravel driveway, surrounded by loved ones wearing masks, but it wound up being so special and meaningful.

But I still have an expensive wedding dress in my closet, tailored and ready-to-wear, so you better believe we will still have a giant party eventually – I don’t care how long I have to wait!

So lovely, Melissa and Robby. Congratulations, and thank you for sharing your joyful memories and beautiful pictures with us!

So beautiful and lovely. Those tulips! The photography editing was stunning. Best wishes. An uplifting pandemic story.

I really enjoyed reading this. They got it exactly right, a wedding is about making a commitment to the person you love. Small simple weddings can be magical and memorable and I congratulate Melissa and Robby.

My sentiments exactly! Lovely post! Congrats to the couple!

This is so wonderful. And boy, does it make me miss New York City. I can’t wait to be down there again when the border opens back up. Moments like these, people being creative and resilient out loud, are what I love the very most about the city. Congrats to the happy couple.

Such a unique and very NY memory!! Congrats!! <3 We got married (years ago) at the Boathouse in Prospect Park, and one of my favorite memories was looking over to see all of the random people who stopped on the bridge to watch our ceremony. It's so "NY" sharing your important life moments with all the random people who happen to be around! <3

This made me tear up. What a lovely wedding, and how wonderful that they didn’t delay and went ahead with it. They (and the strangers who shared it with them) will treasure these memories of a burst of happiness in an otherwise pretty awful year.

Your story made me unexpectedly teary in the best of ways! Thanks for sharing the love — and congratulations!

Absolutely felt happy weepy reading this. Thank you for sharing this story with the community – it is ONLY joy and happiness and there will never be too much of that. Cheers from San Diego!