A Week of Outfits: Juliana Sohn 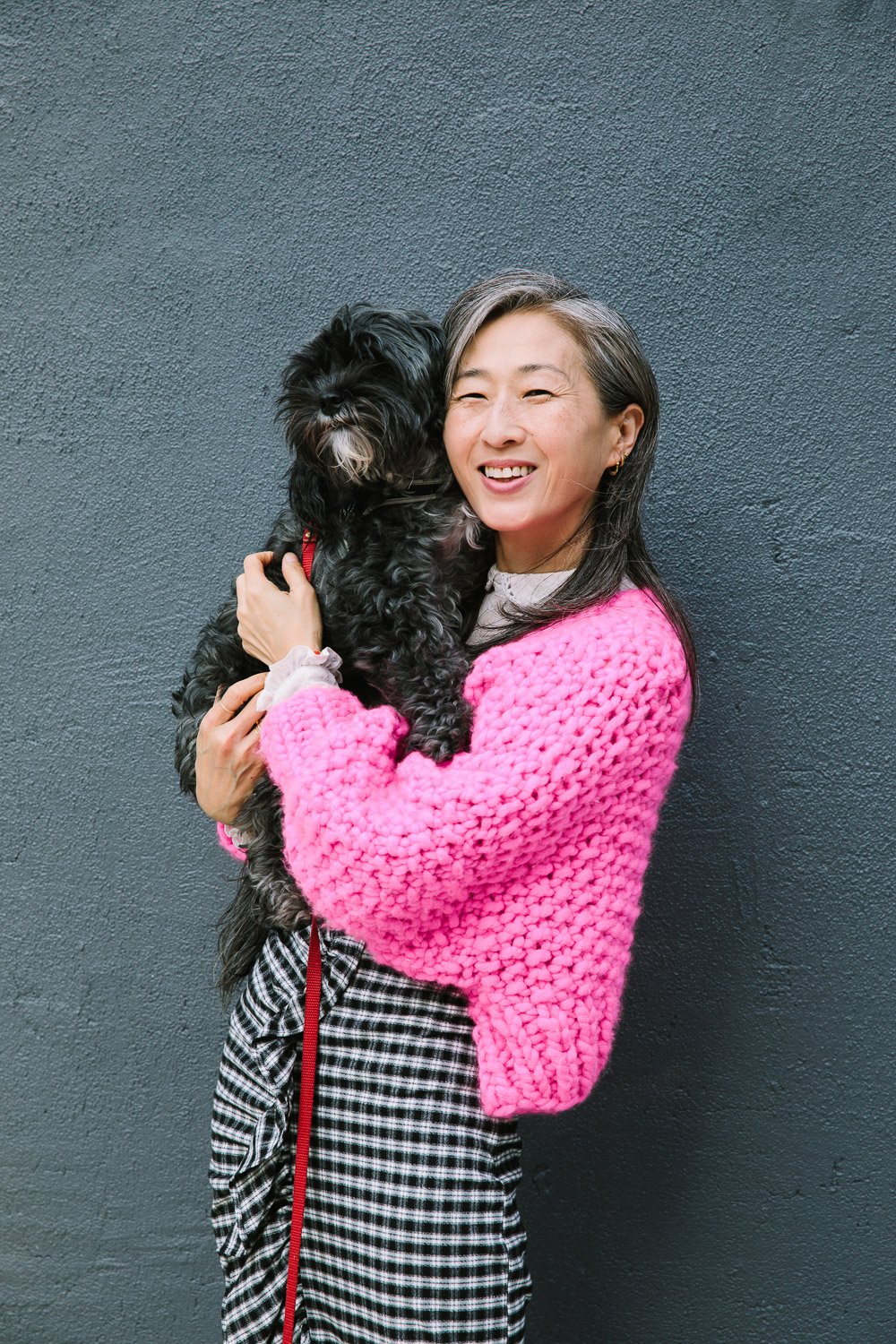 Juliana Sohn is a professional photographer in New York City and the co-host (with me) of K-Pod, a podcast devoted to Korean Americans in arts and culture. At 50, Juliana, the mother of two teenage boys, is one of the most creative people I know and has an eclectic wardrobe to match. Here’s what she wears in any given week… 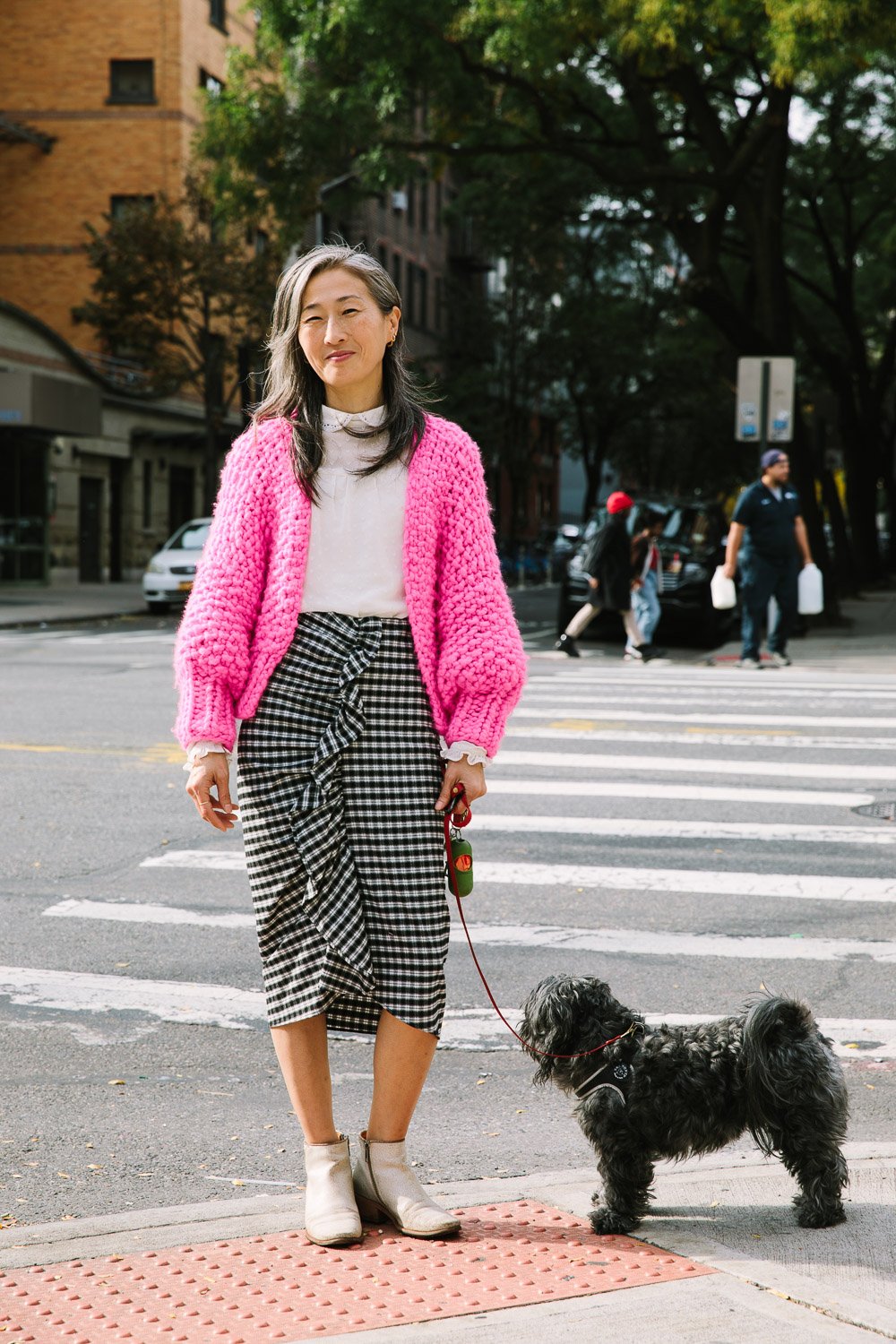 “I’ve been knitting for almost 20 years now. Early on, I focused on baby sweaters and blankets for my kids, but as they got older and didn’t want to wear handmade sweaters anymore, I started knitting for myself. After all these years knitting for others, it’s a real treat to spend the time making something just for me. I’m a huge fan of Loopy Mango, a company that makes these super chunky, almost cartoon-size yarns. Everything you knit with them looks so modern and sculptural. Last year, I got to meet and photograph the co-founder of the company, Oejong Kim, when I interviewed her for the podcast.” 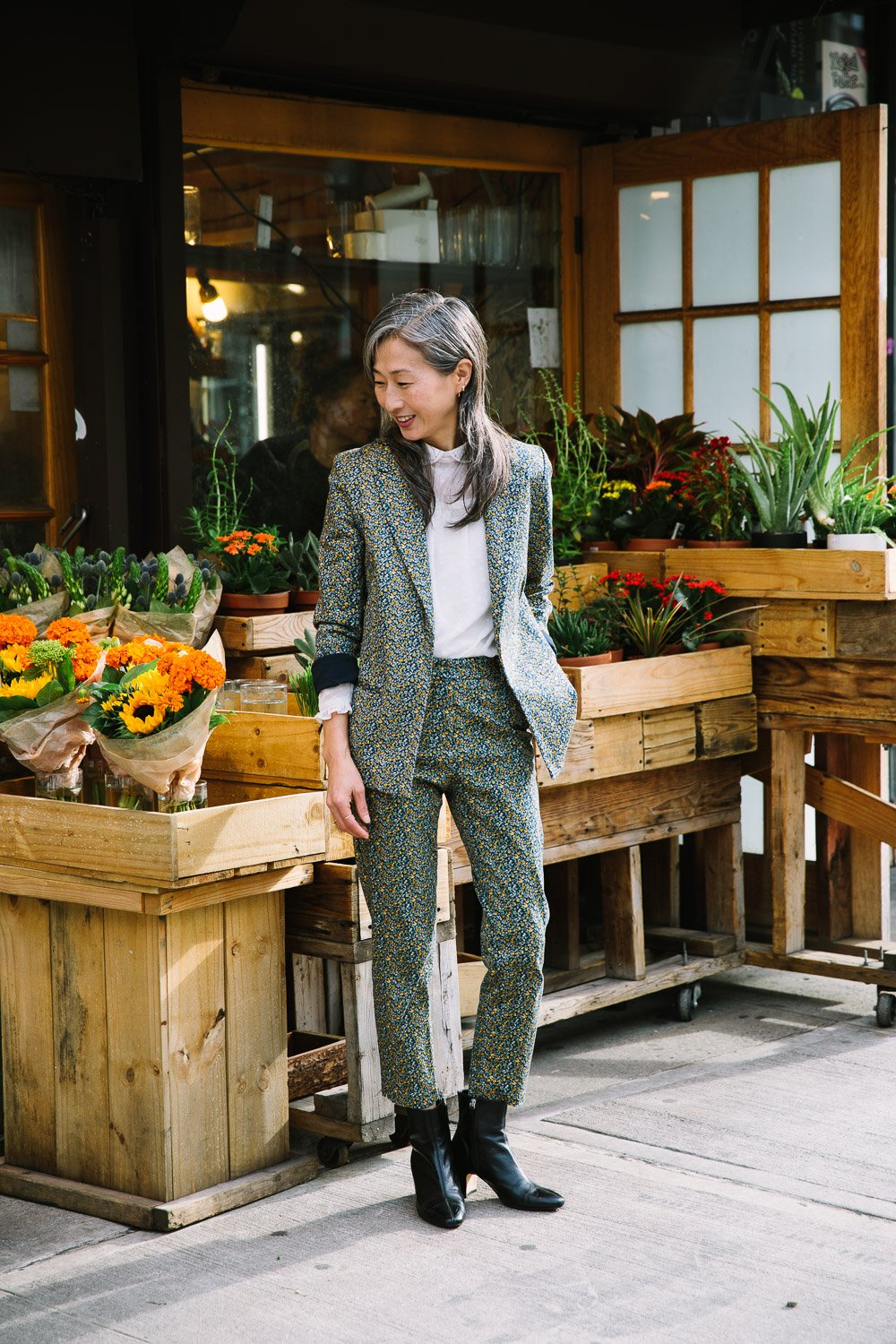 “If I’m shooting in a business environment or at a formal event, I’ll wear this suit. The pattern is playful, but I still feel dressed up. It’s by Wildfang in Portland, OR, a company with a social mission started by two women who used to work at Nike. I try to support women-owned businesses as much as I can.” 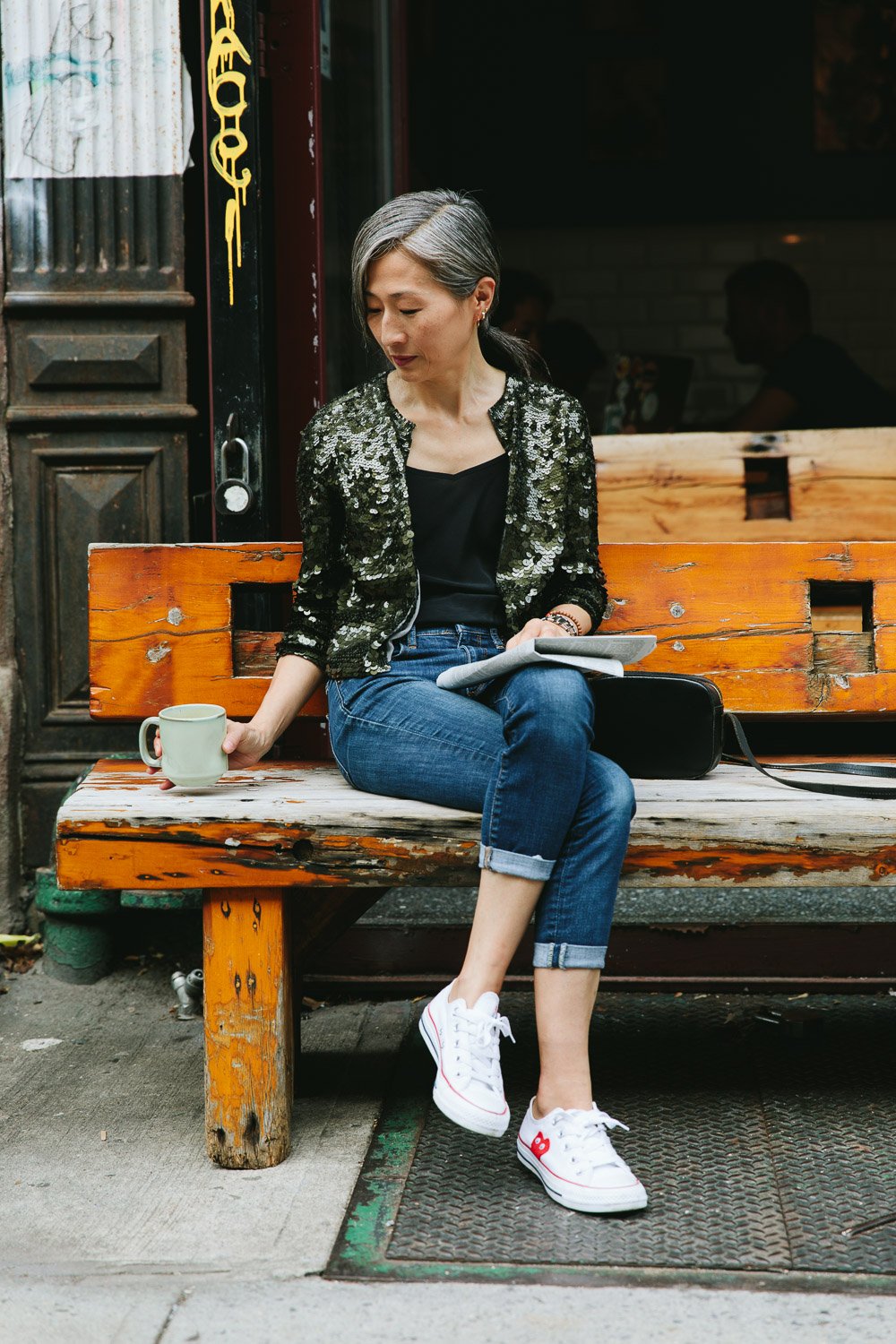 “I stopped coloring my hair about five years ago. I had been dyeing it myself at home to save time and money, but it was such an ordeal — sometimes it came out too purple, or too dark, and every two weeks I would already have roots. Covering my roots was a constant reminder that I was hiding something, so I decided to let it all grow out. I know I could look younger if I colored my hair again but I like that I’m being true to myself. As for the sneakers, I took a pair of regular Converse and glued on the felt heart and googley eyes. It’s my take on the iconic Comme des Garçons sneakers.” 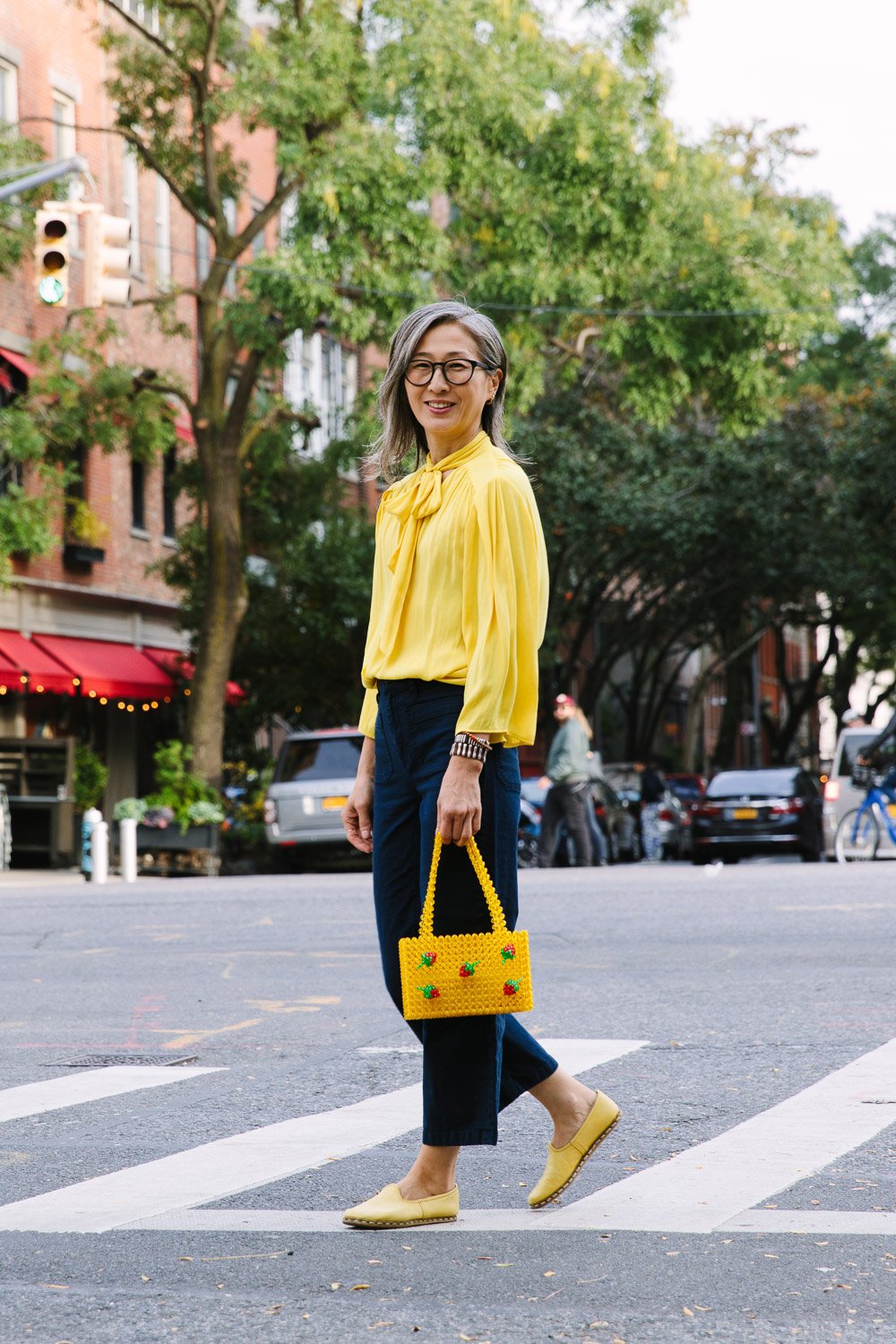 “Somebody I was shopping with told me not to get this yellow top, citing that old saying about how Asians can’t wear yellow. It’s something I heard old-timers say when I was a kid but I was taken aback to hear it repeated in 2019. It just sounded absurd. I think that yellow is such a happy, sunny color so hearing that comment actually spurred me to buy this blouse. To be honest, wearing all this yellow together is a little wacky, even for me, but it’s my little protest against meaningless cultural dictates.” 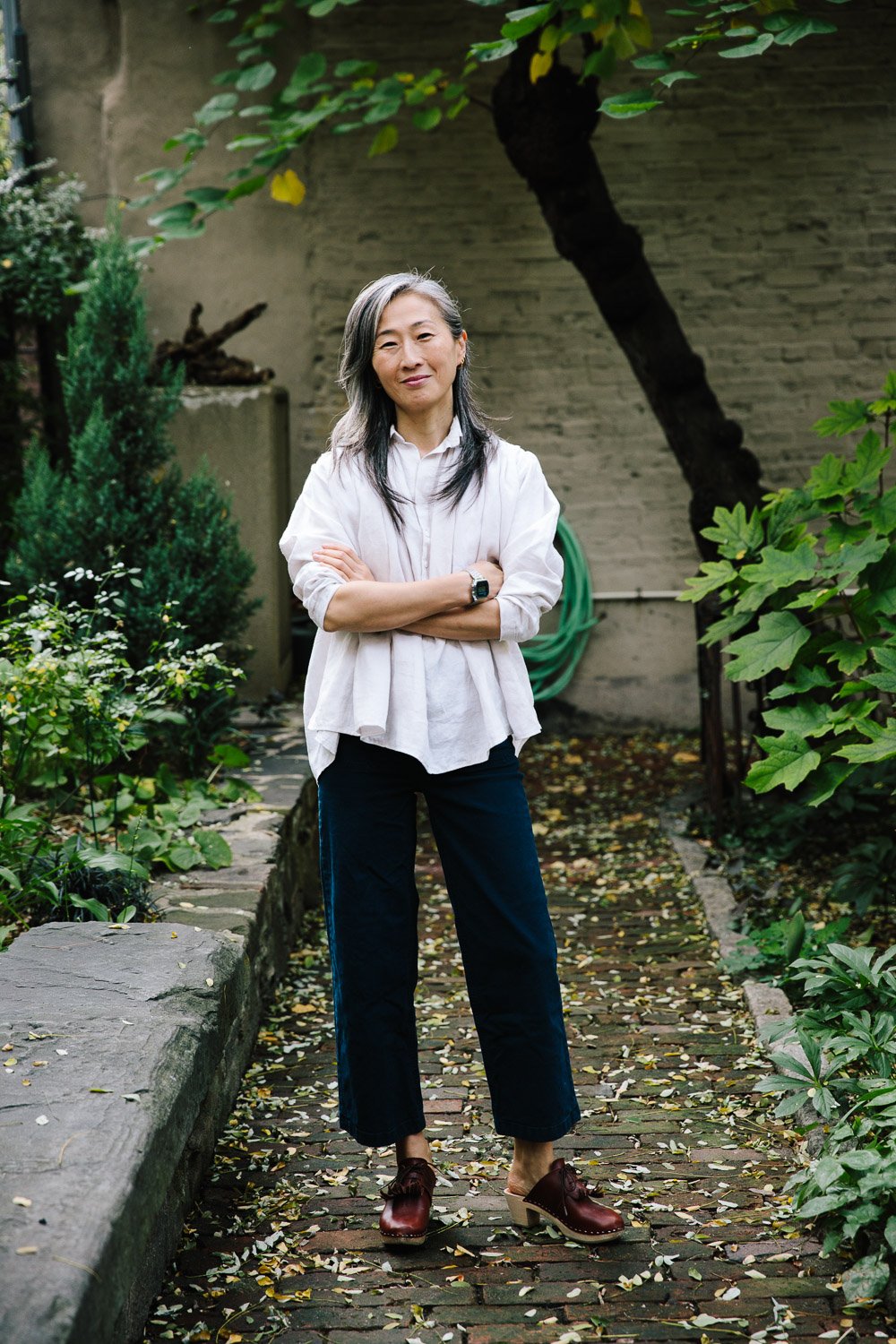 “I’ve always found a lot of my staples at places like Zara and H&M. It’s what I can afford! But I’m increasingly uncomfortable by the environmental and social effects of the fast fashion industry and one way I’ve decided to curb my habit is by making some of my own clothes and accessories. I learned to sew when I was little from my mom, who had been a seamstress in Korea. I’m pretty slow at it, so this blouse took me a while. I used a pattern from a Japanese magazine I picked up at Kinokuniya. The clogs are by Bryr out of San Francisco, which is another woman-owned company.” 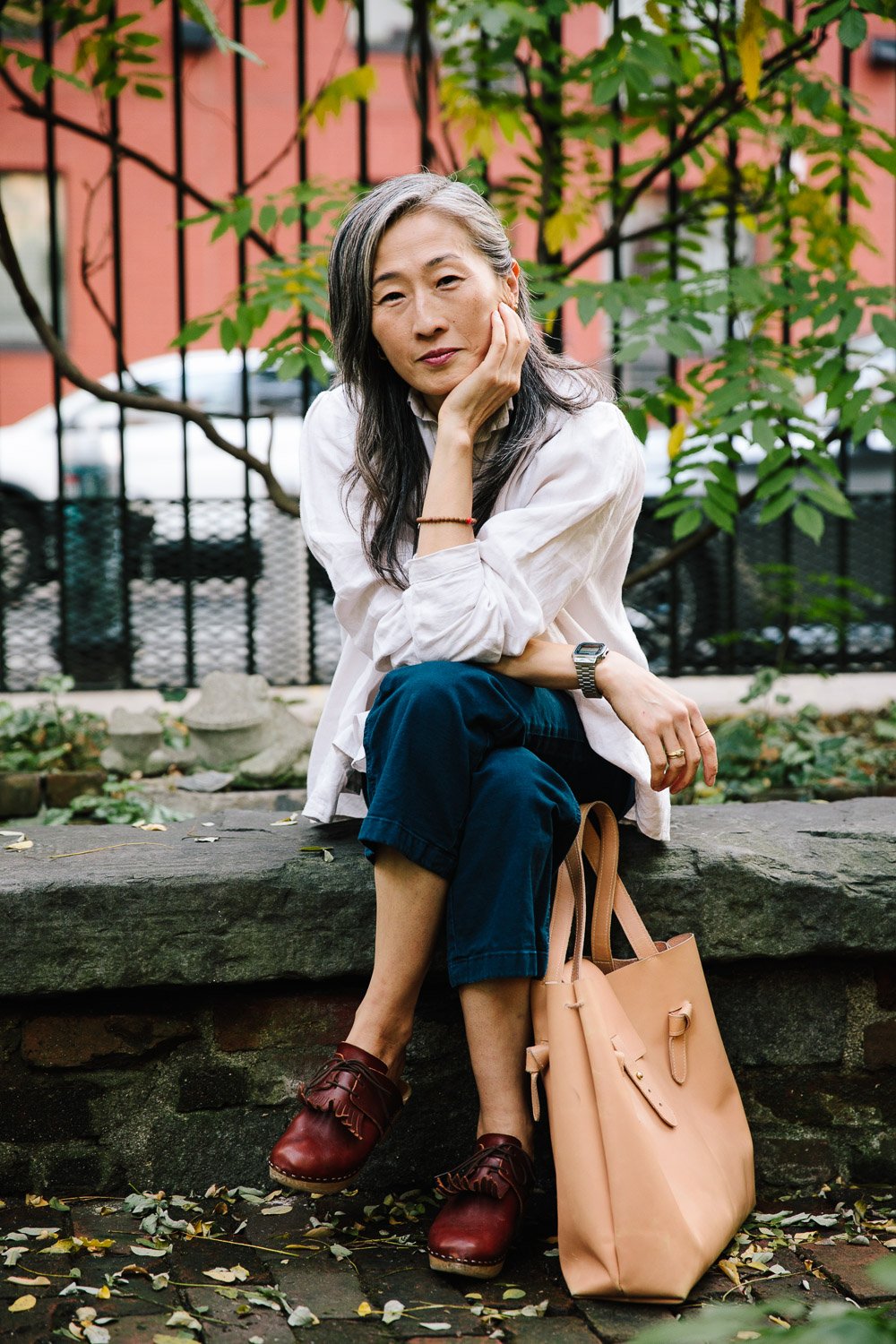 Bag: made by Juliana from Oregon Leather Company. Watch: Casio.

“The watch I wear is a classic Casio. This watch is simple, inexpensive, super accurate and has everything I need, including the timer that I use for long exposures when I shoot 4×5 film. It actually has sort of a cult following. Whenever I meet someone wearing this Casio, I know we will be friends!”

Thank you, Juliana. Feel free to knit us a sweater!

P.S. More women share their weeks of outfits, including a thrift shop enthusiast and a Nashville-based art director.

(Photos by Christine Han for Cup of Jo, shot before quarantine.)

223 COMMENTS
WRITE A COMMENT
Array ( )
Style
most popular
01
A Week of Outfits: Naudia Jones
02
My Beauty Uniform: Samin Nosrat
03
My Packing List for England
04
12 Readers Share Their Meaningful Tattoos
05
The Best Sneakers for Long Walks
May We Suggest…
By Joanna Goddard
Style
A Week of Outfits: Joyce Lee
March 10, 2020

126 COMMENTS
By Joanna Goddard
Style
A Week of Outfits: Charlotte Jacklin
May 12, 2021

I am so glad you bought that yellow top! I have a very similar one & was remembering my middle eastern dad being against yellow. I think it looks fab & we all need more wearable sunshine especially now.

Lovely! And I adore her hair! So cool!

Yes, yes, yes to making your own clothing! I would love to see a feature with women who’ve made their own wardrobe staples and how they style them with RTW items.

By the way, I think that’s the Spicy Hot Pink yarn from Loopy Mango—just knit myself a sweater using that color and it is such a breath of fresh air to my wardrobe! xo

I think it’s so cool that she makes her own clothes and accessories! Makes me want to let the creative side of me take a bit more space :) Loved this week of outfits.

Camille,
Let that creative side take up space! See what it has to say!
Juliana

She’s so gorgeous and cool! I loved her outifts and her hair <3

I love the pink sweater and how refreshing this lady looks in every outfit! Thank you for sharing these original outfits. Also love the white blouse she made herself, very original!

Inspired!! Love from fellow Korean living in Seoul. “Meaningless cultural dictates” – hahahah so much to talk about.

I love all of these outfits! The yellow and navy is my favourite – stunning! I cannot believe someone would say that about Asian people wearing yellow (then again, people are frequently terrible). Thank you for sharing your gorgeous clothes with us, Juliana.

This is my favorite “Week of Outfits” post ever! I am a Korean-American who’s nearing age 50. I’m an East Coast native but currently living in Portland, OR. Juliana’s style is so inspiring, fresh, and graceful. And imho, she bears a resemblance to a younger Meryl Streep.

Funny, that’s totally what I thought, she looks like a young Meryl Streep!!

Jennifer and Hanna,
I have heard the Meryl Streep comparison all my life! I always ask, Sophie’s Choice Streep or Silkwood Streep?

I love her! Wish I knew how to make my own clothes, she had me at making her own Comme des Garcons dupes. :)

hooray with being true to ourselves, which is so so much harder sometimes than it seems! we’re tested everyday by our choices.

the long salt and pepper hair and the chunky bright pink is just awesome.

aww kids who don’t like mama’s handmade clothes, i remember that feeling, when i wanted something store-bought instead of hand-me-downs, mcdonalds instead of what my mom made (even though i loved my mom’s cooking). it’s a rite of passage, i suppose! wait till they turn 18ish and they’ll come around again!

She is the coolest!! Loved it. Favourite one so far!

As a hyphenated Korean (I’ve lived in US last ten years) who grew up mostly in KR and lived with most of the “size 4 or less, otherwise fat” and a very homogenized style culture back in KR, THANK YOU for showing up. I never knew just how much of a gaping hole I had in my heart for role models for people like me. Thank you representing those who want to stand out, do the non-doctor/professor/lawyer thing, and show up with some style beyond the look du jour.

Hi Admirer,
I know each culture has its idealized version of status and achievement. Those who adopt the expected norms are easier for people to understand and accept. I only found my people when I went to art college and it’s probably the reason why I live in the East Village in NYC, which is filled with people just being their unique selves. I hope you find your people! You may enjoy the podcast Catherine and I host, K-Pod. We interview Korean Americans in arts and culture. We started it for people exactly like you!

I love how she seems to own who she is, through fashion and her words – confidence ! Very inspiring.

I think I just spotted Juliana in her yellow Zara blouse in a LinkedIn ad! What a small internet world!

Lol, Chelsea, you are quite the sleuth! I did that as a favor for a friend who works at Linkedin. They needed to photograph small business owners who work from home. She told me they use those pics often internally, I think it’s the lovely yellow!

“Rushes out to buy the same Casio watch.” :) LOVE your attitude, your outfits, your creativity, your simplicity. As a white mother of an asian daughter I’m thrilled to see you here!

You rock the yellow.

Wow, what a cool female. I want to be just like her! I’m totally going to make my converse my own now…not quite sure what I’ll add, but I do have a plethora of googly eyes!

I also really appreciated what she said about fast fashion, including that, unfortunately, it’s what’s affordable! But I’m feeling very inspired by her attitude and fortitude. I’m going to try making some of my own clothes, too :) After all, I can’t go anywhere!

Me too! I love how she personalized her Converse. I’ve been really into tie dyeing and shibori dyeing clothes lately. I’m not that detail oriented and terrible at sewing but it’s an easy way to make unique pieces. Even if I feel like I’ve messed up it turns out great most of the time! I like the idea of adding my own touches to clothes I already have.

Great interview ,she seems like a cool lady. I like her style a lot. She makes me want to quit dying my hair and let nature take it’s course.

I LOVE her style. I think I scrolled through 3 times and will again. I’m 34 this year and find myself wondering how i’ll be dressing in the next 10, 15, 20 years (because it’s more fun to think about then umm…current events). And this is what I aim for. Grown up but still whimsical and fun and unique. I love her. And her gray hair is just beautiful. As is that homemade sweater *adds knitting to list of skills I need to learn*

This might be my favorite “Week of Outfits” yet! I love how she can take affordable items and totally make them her own! Everything looks so classy but infused with personality. I love!

her outfits make me smile! such a fun style!

So inspiring!!! Love her style and LOVING all of her handmade touches! Agreed with previous commenters- one of the best outfit posts ever!