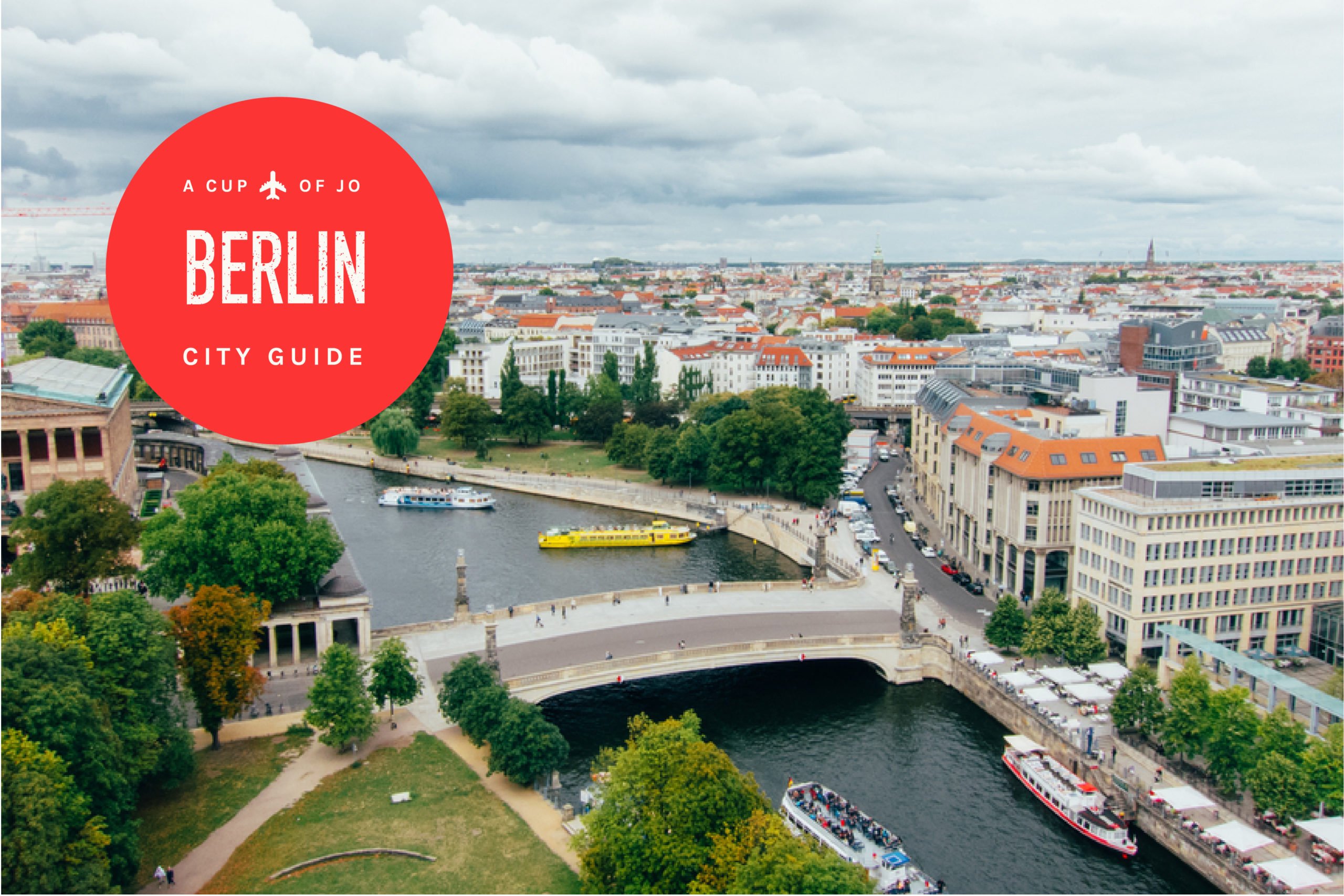 We are huge fans of Luisa Weiss, OG food blogger and author of My Berlin Kitchen, as well as one of the definitive books on German baking. Luisa lives in Berlin with her two young sons and husband, Max, and we’re so happy she’s here to share some favorite spots in her hometown… 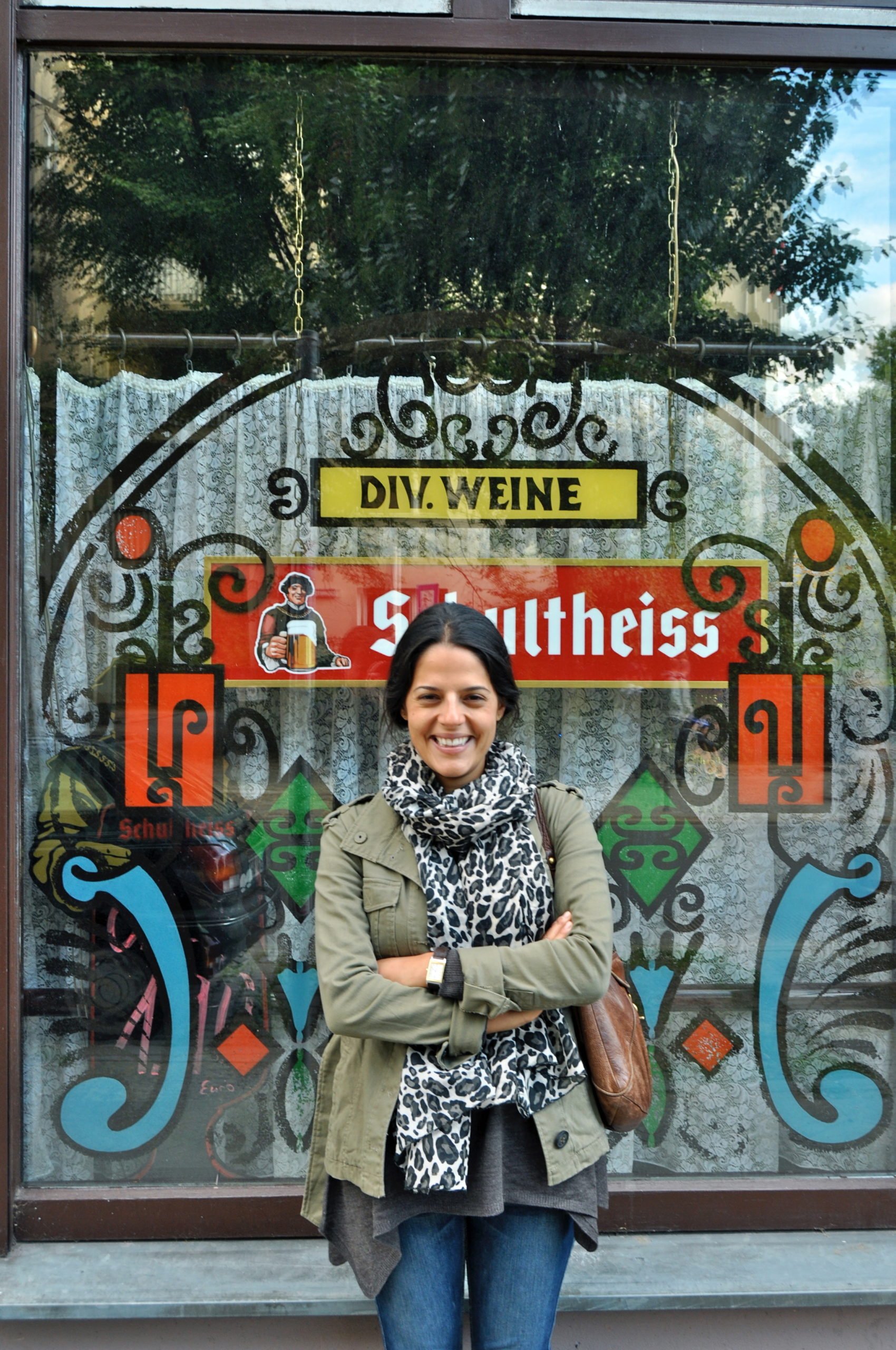 I am half-American, half-Italian, and a proud former New Yorker. But at heart, I’m a Berliner. I was born here and partially raised here, and although I’m not German and have spent many years elsewhere, this place is my true home.

Berlin, huge geographically, but relatively modest in terms of population, is a strange place. Its violent history so visible that you get used to confronting it on a daily basis. New buildings from the 1950’s stuck next to graceful turn-of-the-century apartments are not-so-subtle reminders of how much was destroyed; countless memorials to Jews and the different groups of people who were persecuted under National Socialism, Berlin is like a living experiment in confronting national guilt. It’s a scrappy city with perpetual housing problems and historically low incomes (unless you’re from the start-up class). But Berlin’s artistic and cultural offerings are eye-popping in quality and quantity—museums and art galleries abound, world-class music is a daily occurrence, and there is a general spirit of freedom and wildness that, though much tamed in recent years, still makes Berlin unique, not just in Germany, but in Europe.

As anyone who has ever spent time here can attest, Berliners are a funny mixture of big hearts and loud mouths, capable of generosity and a snarl, depending on the weather, the mood, the morning commute. Delving a little into the traumatic history of the city helps explain some of this dichotomy. Largely, it is a wonderful place to live and to visit, with great food and culture, the most green spaces in Europe, and endlessly illuminating and heart-wrenching historical exploration. 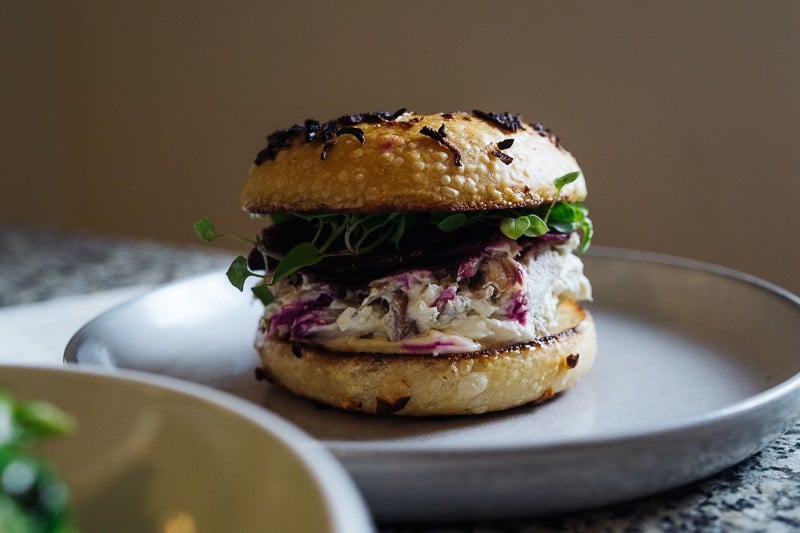 Bagel with Mackerel Salad at Annelies

Start off your visit to Berlin with breakfast at Annelies, a bright and cozy little cafe on the edge of Görlitzer Park in Kreuzberg. Its excellent and tightly edited menu is unique in Berlin, showcasing rigorous talent from the kitchen in a casual, relaxed atmosphere, with very good coffee to boot. I love their take on Bircher Müsli, chefy, yet so delicious, the chewy bagel topped with smoked mackerel salad, their pickled fennel, and the perfectly flaky pastries from Albatross, a local bakery. 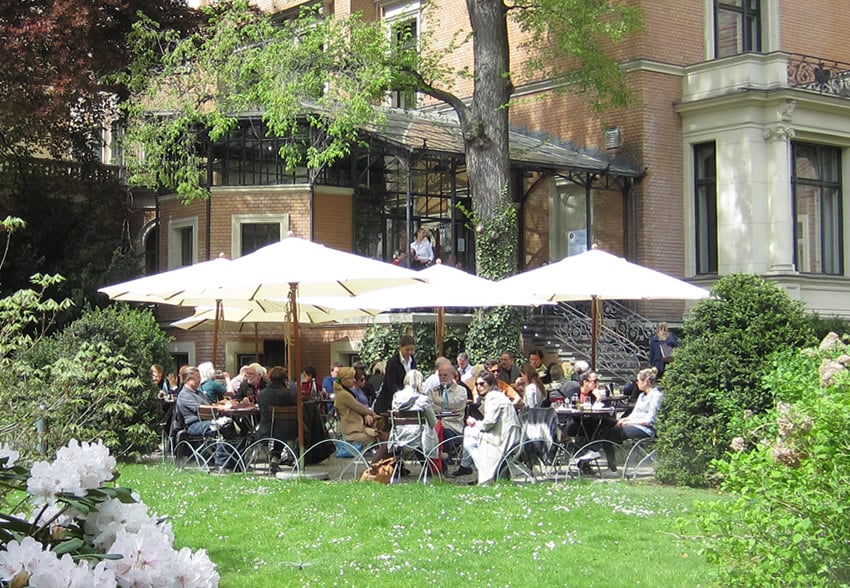 For a more old-world Berlin experience, head to the elegant Literaturhaus on genteel Fasanenstrasse, just off Kurfürstendamm, old West Berlin’s 5th Avenue. A beautiful 19th century villa houses this restaurant and cafe (a lovely bookstore is located on the ground floor) where you can go at any time of day. I’m partial to breakfast there, tucked away in one of the corners of the gorgeous, light-filled rooms, where they will bring you the classics of German breakfast—rolls and butter and jam, a boiled egg, slices of ham and cheese—or lunch, where we always end up ordering their take on a tuna sandwich (the only one you could find in Berlin for many years). It’s also a wonderful place to go for the requisite afternoon teatime as they have a pretty great assortment of cakes and tortes to choose from.

Berlin famously has the largest Turkish community in the world outside of Turkey, and no visit here could be considered complete without at least one Turkish meal. A spectacular one (go hungry and with friends) can be had at Fez Turkish BBQ, a bustling and lively place where each table grills their own meat orders and feasts on some of the best Turkish mezze I’ve ever had. Reservations essential. For a more casual but no less delicious experience, head to Doyum on Kottbusser Tor. 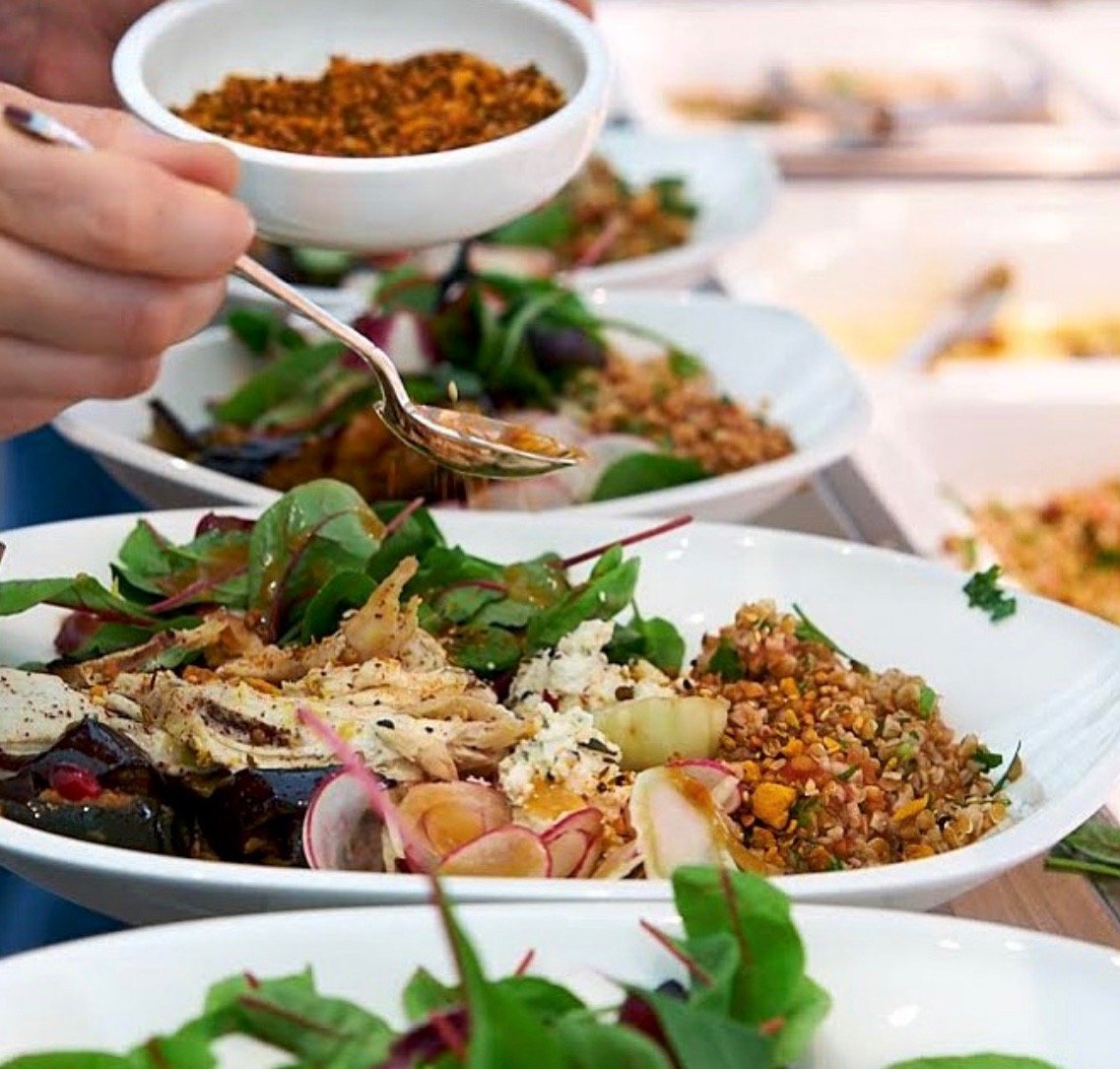 After years of catering and biding their time to find the perfect place, two Persian-German sisters opened Rocket + Basil, a fantastic spot in Berlin’s Tiergarten district last year. Influenced also by their childhoods in Australia, it’s a delicious and casual mashup of home-cooked Iranian food, fresh and beautiful salads, and comforting sandwiches and pastries. 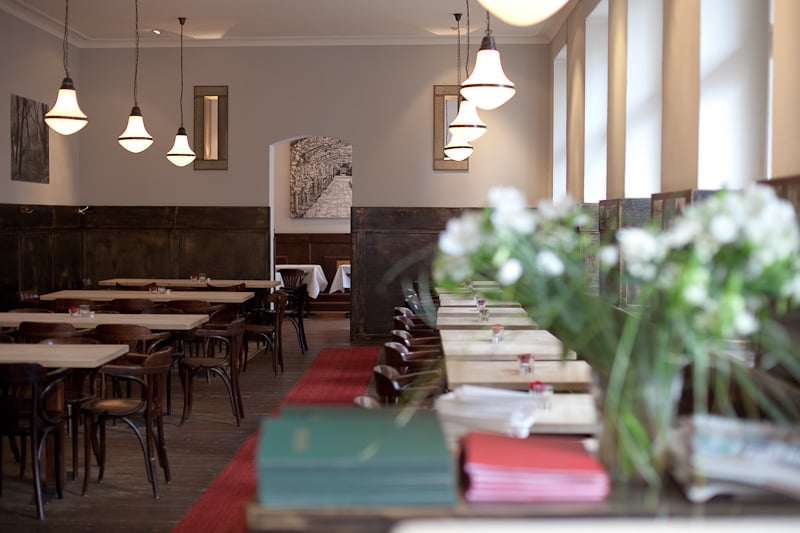 For a proper, rib-sticking German meal, head to Renger-Patzsch in Schöneberg, where the meat is braised and succulent, the dumplings plump and filling, the cabbage melting and savory, and the wine list is heavily German and Austrian. Renger-Patzsch, with its austere, pared-back interior and its relaxed attitude, reminds me very much of the old West Berlin of my childhood, without feeling old-fashioned or passé. If you must have Wiener Schnitzel, go to Engelbecken in Charlottenburg (a favorite of the theater crowd), on the banks of the picturesque Lietzensee, or Ottenthal, an Austrian favorite. 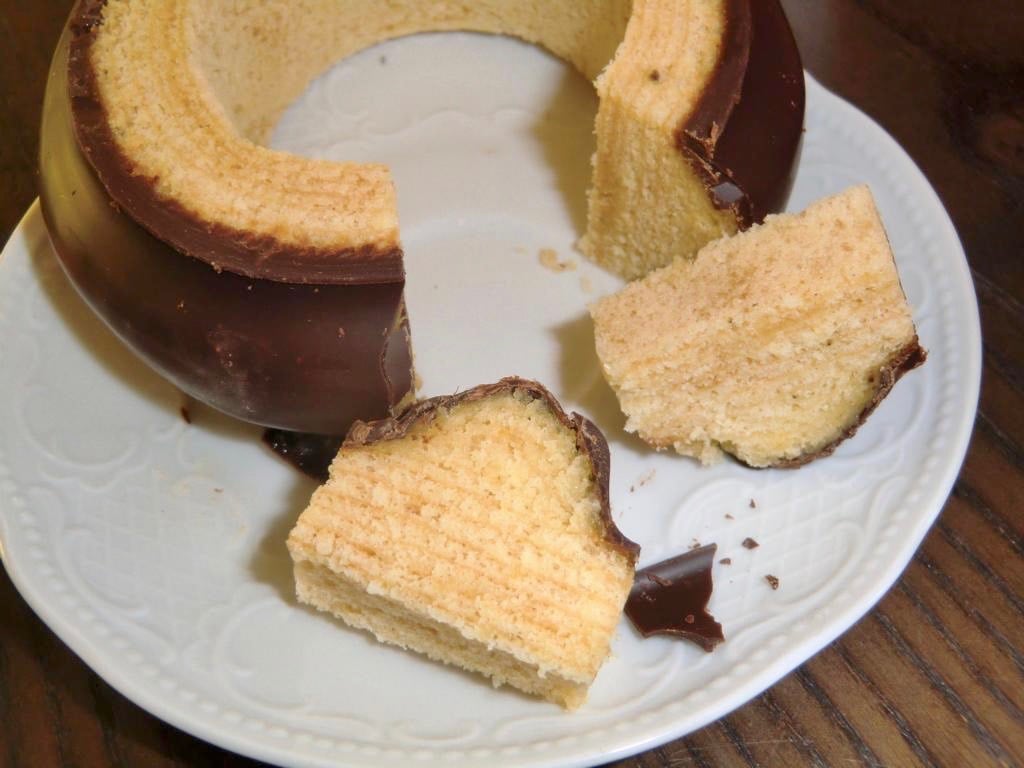 After a weekend morning of strolling down the fleamarket on Strasse des 17. Juni, in the shadow of the gold-winged victory statue, make your way through the mid-century boxy buildings of the Hansaviertel to Buchwald. Konditorei Buchwald, family-run for the past 160 years, makes arguably the most delicious cakes, tortes and Baumkuchen, a finely layered cake enrobed in glaze or chocolate, in all of Berlin. Its tea-room is straight out of the 1950’s, its cakes are enormous and delicious and you can either buy slices or an entire tower of Baumkuchen, which the bakery ships all over the world to homesick Berliners.

In the city’s understandable desperation to tear down the Berlin Wall in 1989, remarkably little has remained of it. To get a sense of the many layers of 20th century Berlin history and the Wall’s formidable presence, I always tell visitors to head to the corner of Wilhelmstrasse and Niederkirchnerstrasse, where a strange mélange of Berlin history is visible to all who pass. Just on this one corner, there’s the Topographie des Terrors, an indoor/outdoor exhibition space built on the former site of the Gestapo and SS headquarters, one of the only remaining pieces of the “outer” wall (the one visible to the West), the mortar-marked Martin-Gropius-Bau museum, the Ministry of Finance housed in a building built for the Third Reich’s Ministry of Aviation, and Checkpoint Charlie just down the street. 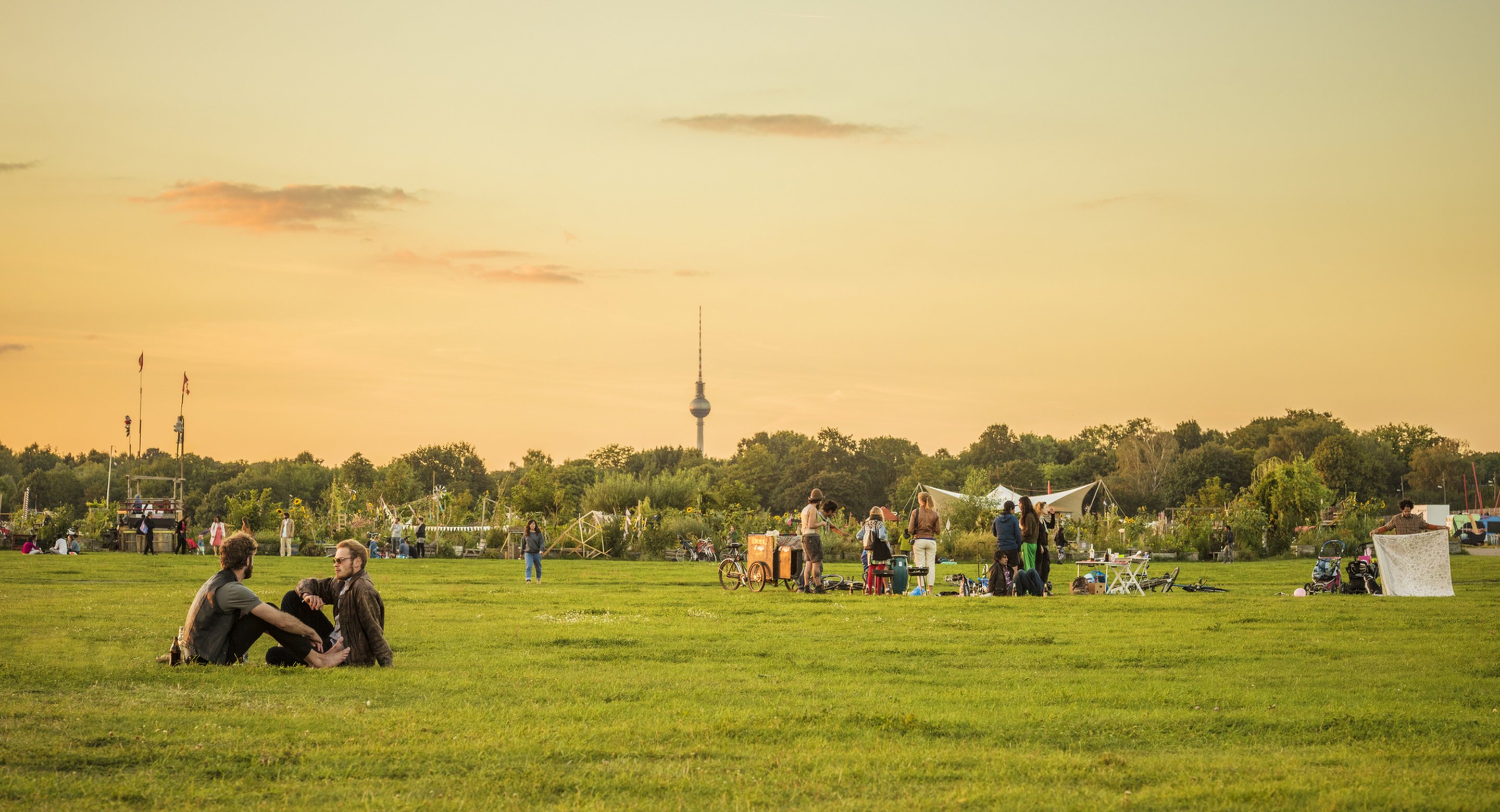 One of Berlin’s greatest success stories of recent years was the transformation of the former Tempelhofer airport into Tempelhofer Feld, a huge (I mean, huge) and sprawling public park. Come here to fly kites, roller-blade or cycle down a literal runway, do yoga in the tall grass, barbecue along with local residents, or just sit in a lawn chair and drink a beer. While Berlin is filled with many different kinds of parks, Tempelhofer Feld feels the most “Berlin,” with its important role in Cold War history, its recent housing of refugees, its instant inclusion as many Berliners’ favorite space, and its magical randomness. 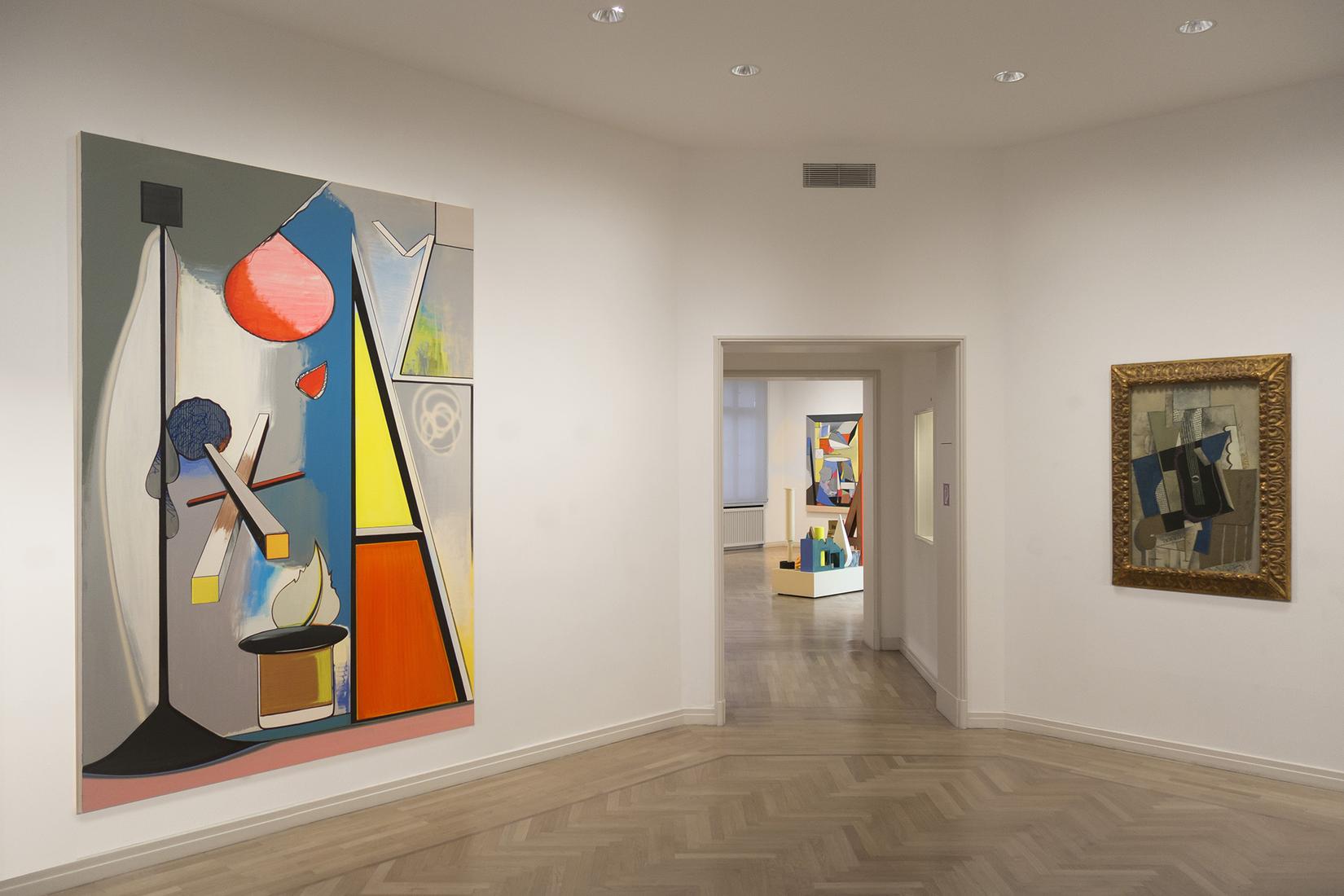 In a city bursting with museums, it feels slightly absurd to single out just one, but the Berggruen Museum, a jewel box of a museum stuffed with modern art, has always had a special place in my heart. Its founder, the art dealer Heinz Berggruen, was born to German Jews in the neighborhood I live in. He fled Berlin in 1936, first to the U.S. and then to Paris. Nearly 60 years later, the German government invited Berggruen to exhibit his incredible art collection in a museum across from Schloss Charlottenburg. A few years later, Berggruen agreed to sell his collection to the German government in a “gesture of reconciliation.” Whenever I wander the halls, gazing at the incomparable Picassos and Klees, I think about this exchange, and the pain, generosity, and atonement behind it, and it moves me just as much as (even more than?) the art does. 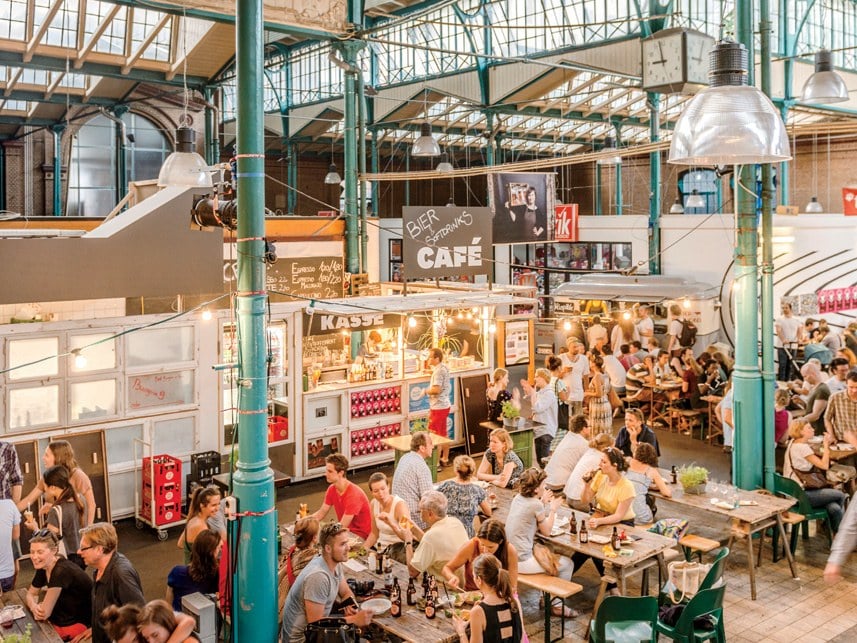 Arguably the incubator of many of the fantastic food businesses that have cropped up in Berlin over the past decade, Markthalle Neun is a must-visit if you’re interested in food and sustainability.
Located in a 19th-century covered market hall, it’s a combination of food court, living gentrification experiment (not always with harmonious results) and event space for workshops, talks and food-themed festivals. 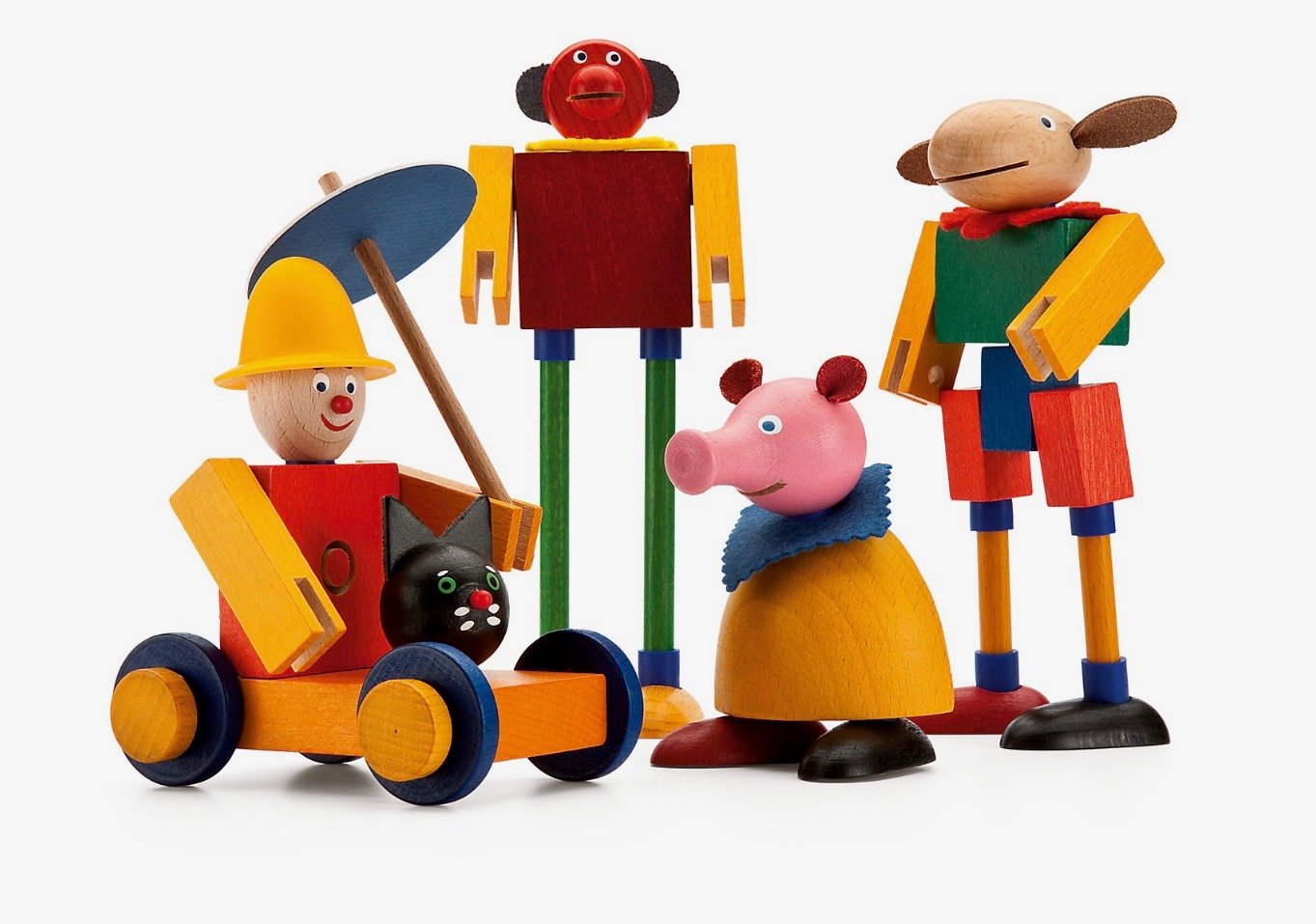 The be-all, end-all German emporium for handmade objets for house, home and garden, it is nearly impossible to enter Manufactum without wanting to buy at least half of it. Elegant felt wool slippers for your husband? Check. Handmade wooden toys for your children? Check. Intensely hued wool blankets for your bed? Check. Buttery hand-stitched boots for your mother? Check. Handmade dusters, glass-bottled cleaning elixirs still made with 100-year-old recipes by a Benedictine monk somwhere in the Alps, and an artisanal steel dustpan? Check check check. 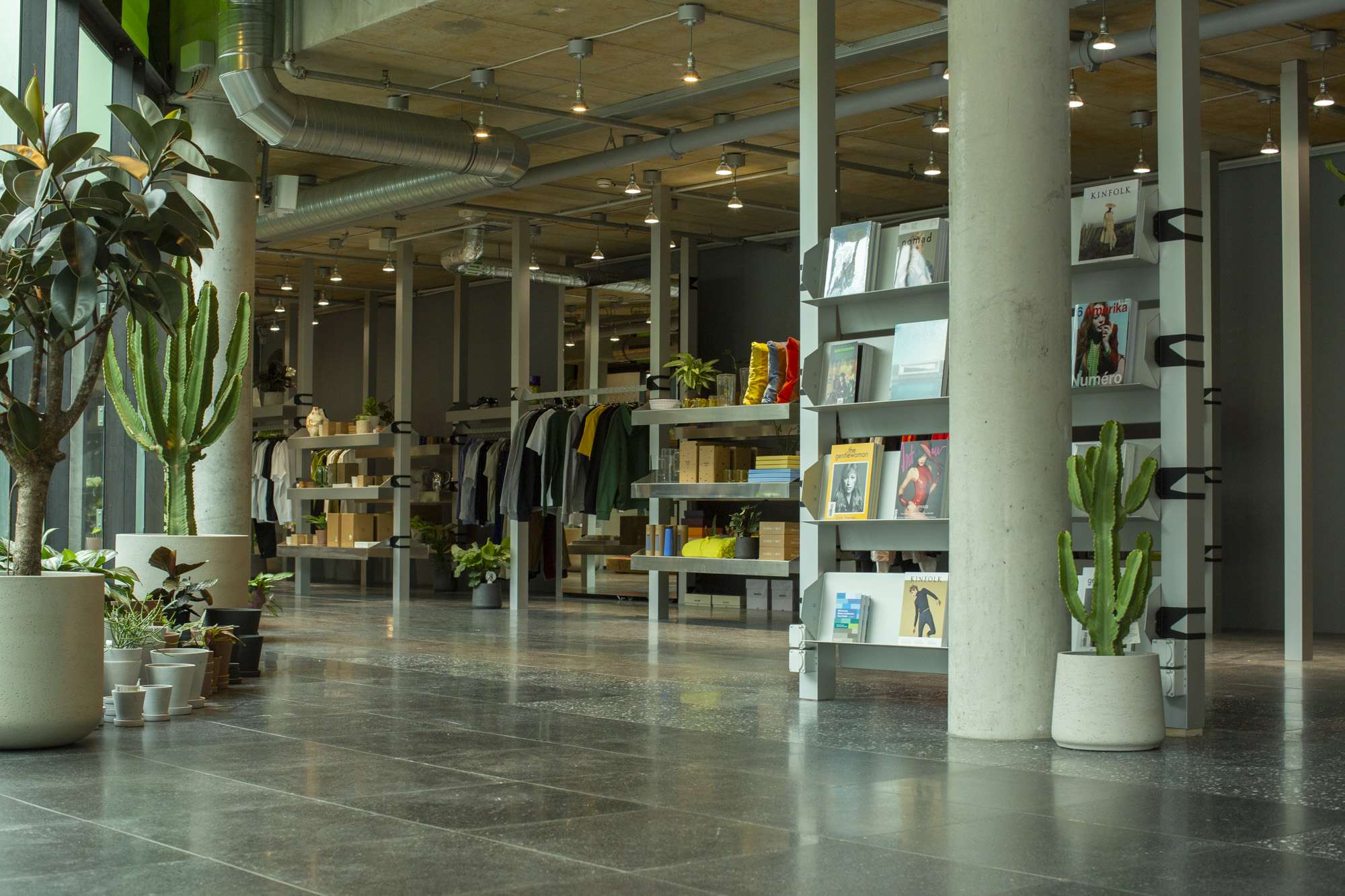 Several years ago, a tract of empty office buildings in the formerly unlovely area around Zoo Station was transformed into Bikini Berlin, a modern mall overlooking the zoo. The mall is unique in that it not only has regular tenants that include the cultish Berlin eyeglass brand Mykita, the Dutch clothing brand Scotch & Soda, and Voo West, an outpost of the popular Berlin concept store, but it has rotating local brands showcased in “boxes” scattered throughout the ground floor, giving prime space to independent designers and retailers in a fun and quirky way, with views of the baboons. 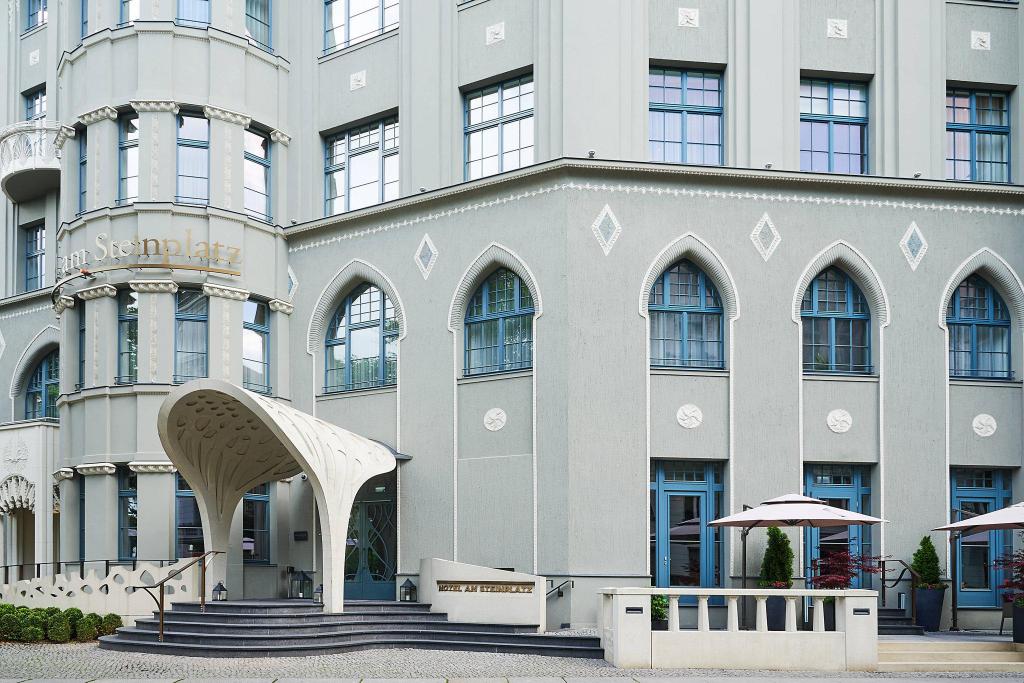 For a luxury stay, check out Hotel am Steinplatz, a boutique hotel housed in a turn-of-the-century building in Charlottenburg, and just steps away from a neighborhood filled with galleries, restaurants and shops. The restaurant and bar pride themselves on largely using only local ingredients and the hotel breakfast buffet is one of the best in the city. 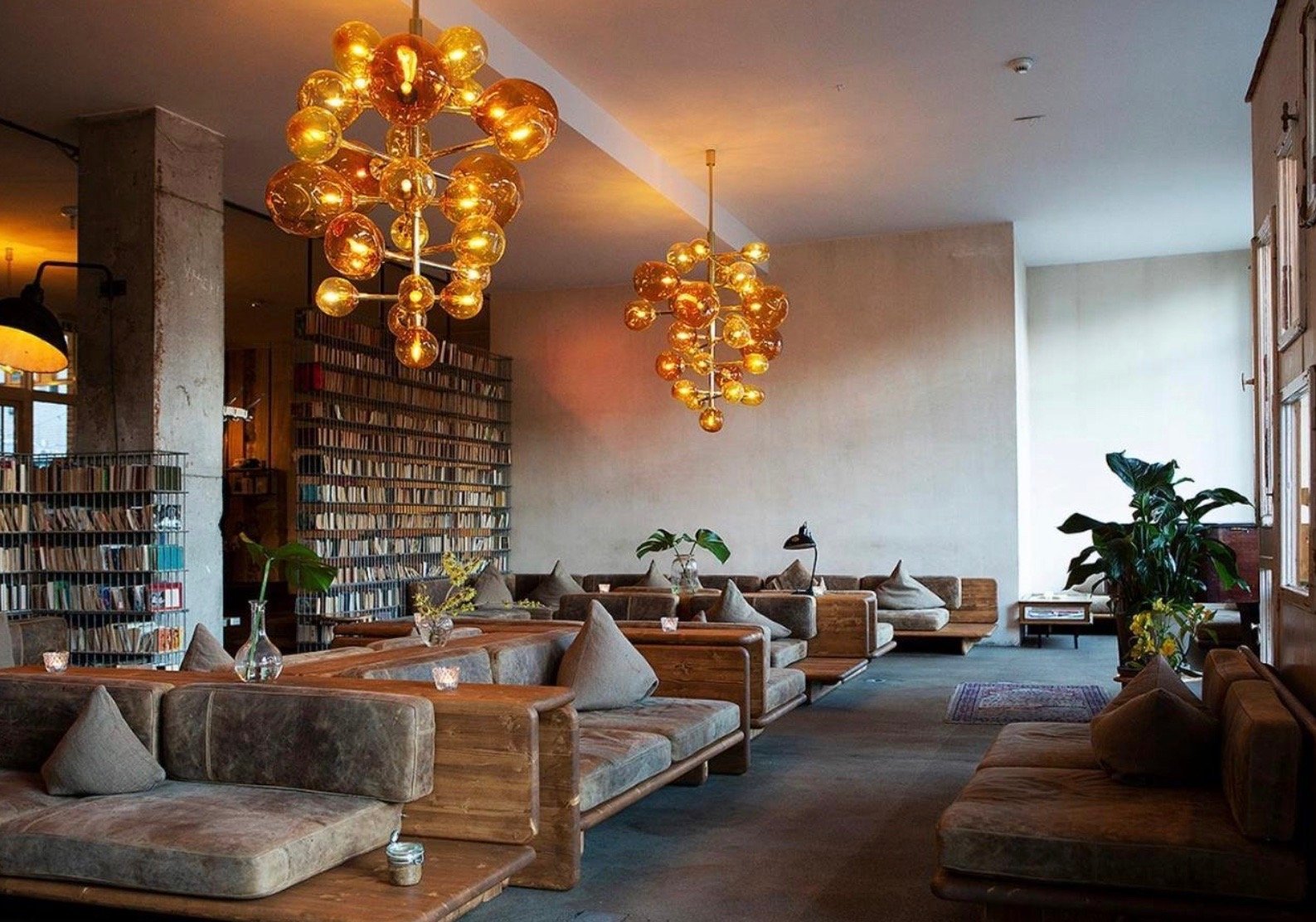 The lobby at the Michelberger Hotel

For the budget-minded, the fun and trendy Michelberger Hotel on a busy street in the youthful, bustling neighborhood of Friedrichshain has its finger on the pulse of modern-day Berlin in a way that no other hotel in the city does. Its restaurant is also consistently popular.

If staying in an apartment is more your speed, you can do no better than reserving one in the lovingly restored and decorated Gorki Apartments on the border between Prenzlauer Berg and Mitte. The area’s former grittiness has mostly been replaced by cream-colored house façades, cool stores and delicious places to grab a bite. 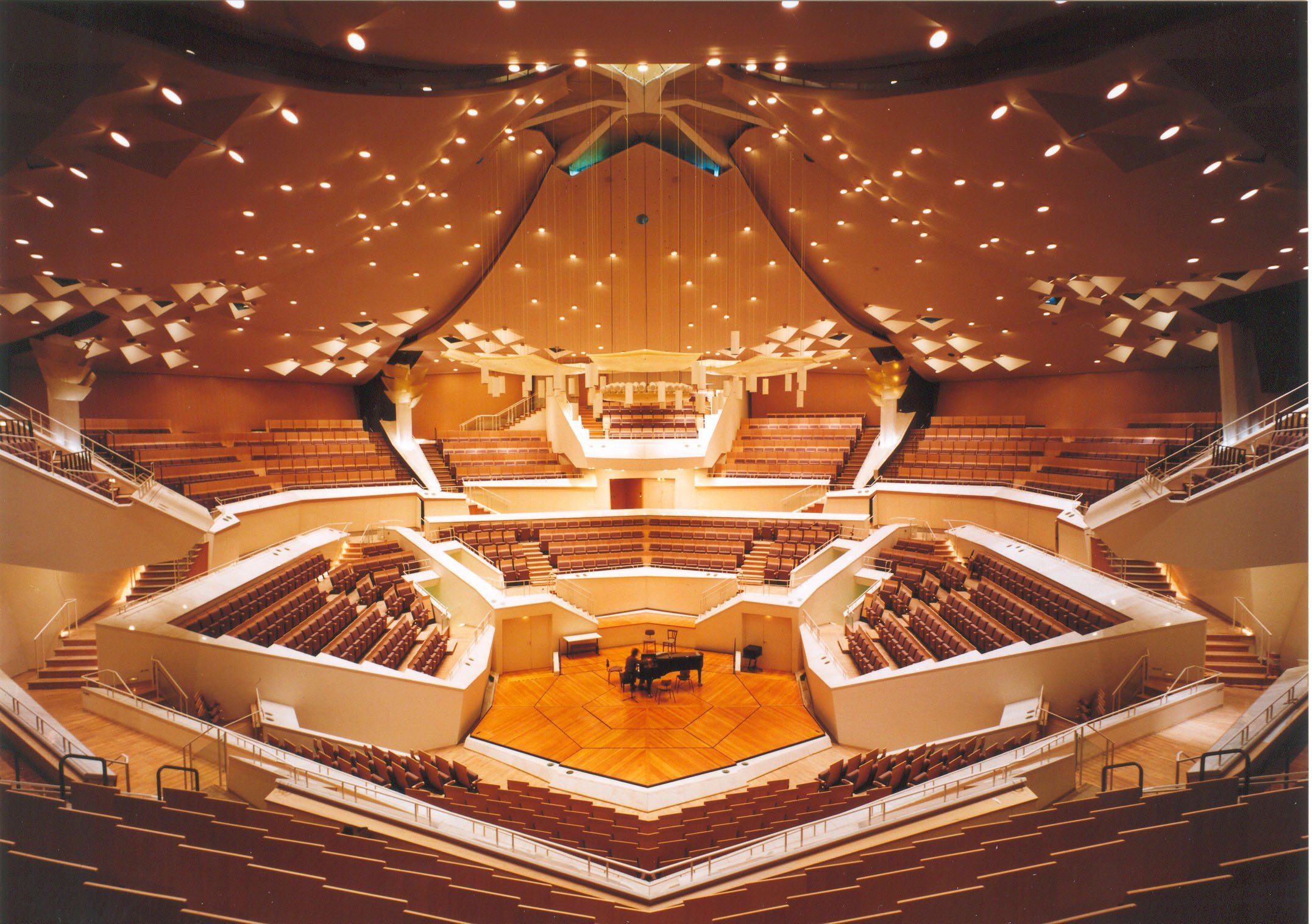 Even if you think classical music isn’t your thing, I urge you to buy a ticket to see the Berlin Philharmonic play in their iconic hall designed by Hans Scharoun. The acoustics in the unusually shaped room are unparalleled and the views onto the musicians make for an entirely different concert experience than what you may be used to or expect. The lights in the hall are never entirely dimmed, so you can see the players in their element, as well as the people around you taking in the experience. Tickets are more affordable than in other major music cities like New York or Paris, with a wide range of prices to keep the experience accessible to everyone, and the experience of hearing the Berlin Philharmonic play is transcendent.

Thank you, Luisa! And everyone, what other cities would you like to see?

Have You Ever Traveled Alone?