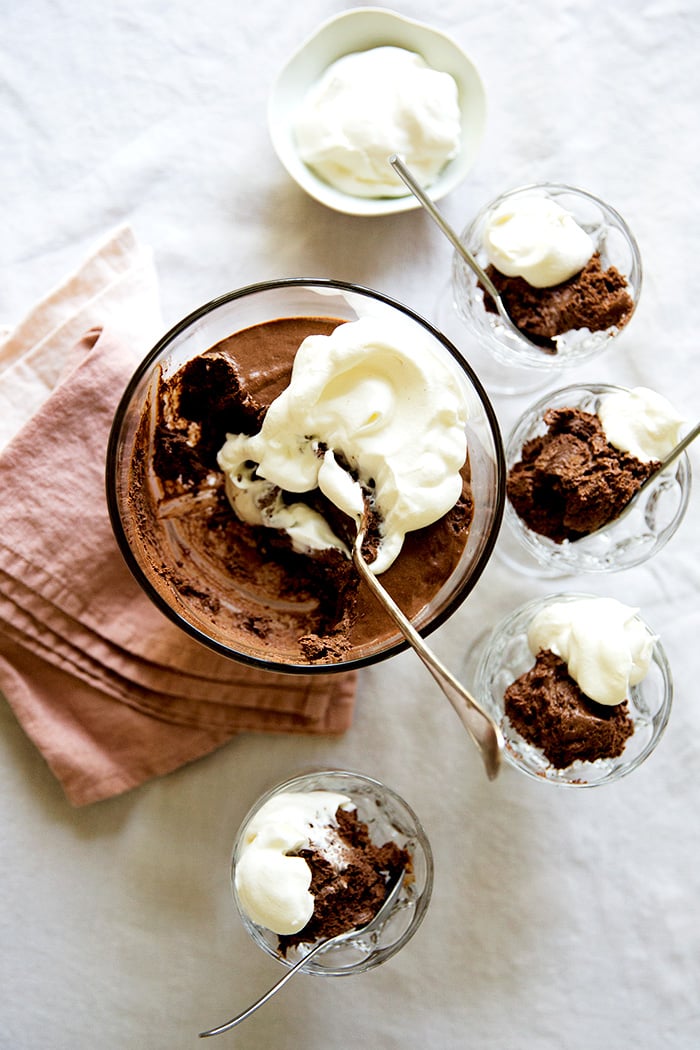 Anyone who has ever come to my house for dinner knows that I try to be as unfussy an entertainer as possible. But last weekend I went off-roading a bit…

My friends were stopping by on Sunday night with their two young kids. Much to my delight, they do this fairly frequently, and most of the time I just throw together a big pot of pasta or a few pizzas topped with whatever I scavenged up at the Saturday farmer’s market. Maybe some chips and guac to start, maybe salsa. Maybe some cupcakes from the local bakery for dessert. Like I said, unfussy.

But this past weekend, I decided to make one of my favorite desserts that also happens to be kinda famously fussy: chocolate mousse. You have to separate eggs, you have to melt chocolate and bring it to the right temperature, you have to whip the whites to the right stiffness. (None of this is hard per se, but it does take more focus than swinging by the local bakery.)

But when I make it, I always think the same thing: Wow, is there a better dessert in the world than elegant, old-school, light-as-air chocolate mousse? When I was a kid, it was the ultimate Fancy Treat, especially when piled high with whipped cream. 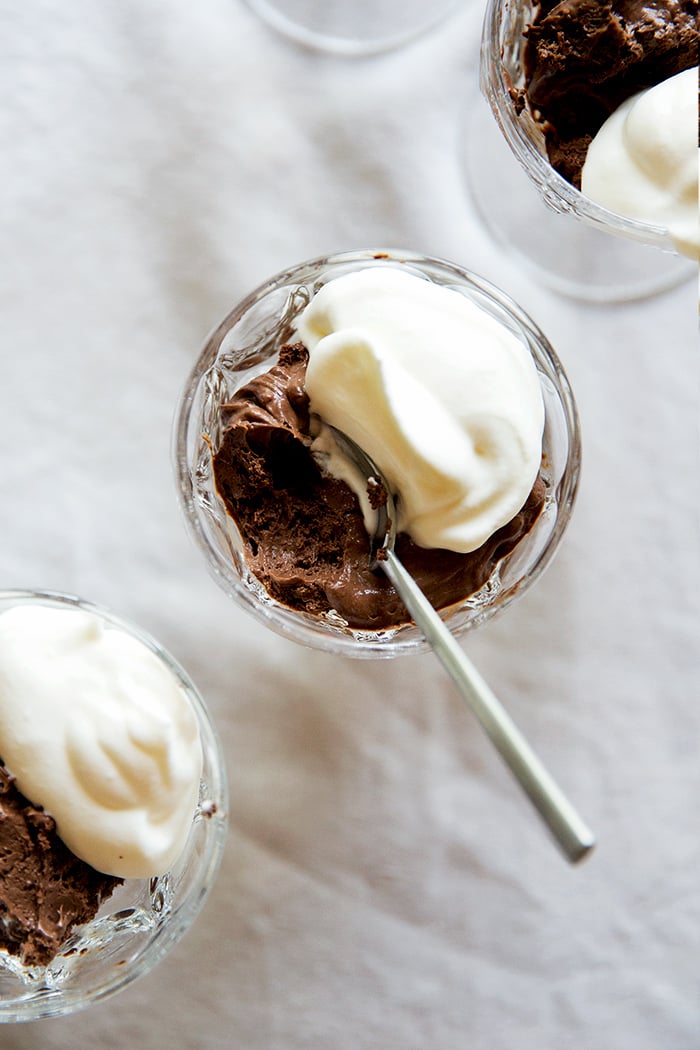 And now, as an adult, I have a whole new appreciation for the dessert because I can make it in advance when people are coming over. (In fact, mousse takes at least three hours to set, so in fact I have to make it in advance.) And those people almost always gasp with pleasure once it makes its way to the table. You can prepare it in individual portions of course, but lately, I’ve been into prepping the whole thing in a large-ish bowl topped with a big mess of freshly whipped cream. 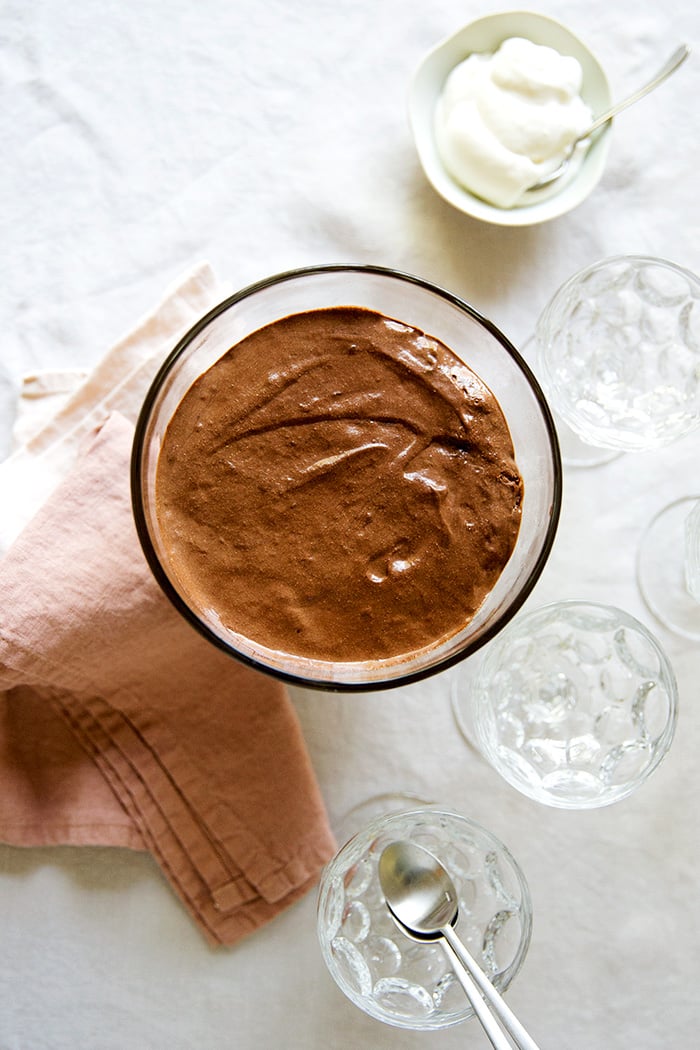 Melt chocolate in a double boiler or in a metal bowl placed over a pan of simmering water. Set aside and let come to room temperature. (This is important.)

Separate six eggs into two medium-large mixing bowls. Add a pinch of salt to the egg whites and whip until stiff but not dry. Stir the melted chocolate into the egg yolks until just combined. Then, using a rubber spatula, delicately fold in egg whites to the chocolate-egg mixture until combined. You do not want to overmix. Pour batter into a serving bowl (or individual bowls) and refrigerate for at least three hours.

In a small-medium mixing bowl, using an electric mixer (or a strong, enthusiastic wrist), whip the cream and vanilla extract together until stiff peaks appear. Spoon whipped cream on top of the mousse, the more artless you are about this, the better.

Thoughts? Do you love chocolate mousse, too? (At the restaurant Chez Janou in Paris, they bring a giant bowl to your table and give you a few heaping spoonfuls. It feels like one of life’s great pleasures!)

(Photos by Alexandra Stafford for Cup of Jo.)

…wait, is mousse just all raw eggs? Did I miss the cooking step?

Amy – Yes, traditional chocolate mousse is made with raw eggs. The only “cooking” is melting the chocolate in the first step.

Okay, I love the recipe, but all I can think of is David and Moira Rose (of Schitt’s Creek) arguing over how to “fold in” the cheese. I cry laughing every time I see this!

I made this yesterday and was SHOCKED at how easy and delicious it was. Truthfully, the whole time I kept wondering if I was doing it right because it was so easy. (I melted the chocolate in the microwave to make it even easier/quicker.) I also threw in a couple of raspberries for presentation. I’m considering making a maple whipped cream next time and seeing how that goes. I know, crazy.

BONUS: all I had to get was chocolate because I had everything else on hand (which made splurging on the nicer chocolate a no-brainer.) My guests were ridiculously impressed, and my dog loved licking the whipped cream bowl.

A win all-around! Thank you!!!

Is it typical to make mousse with no cream and only egg?

Oh no! I’m trying to make this right now but got a bit of water from the double broiler into the (pricey) chocolate. The chocolate immediately turned into a sand-like consistency. America’s Test Kitchen says, cointerintuitively, to add small a kings of boiling water to re-dissolve the chocolate. Hope it can be salvaged.

Chocolate moussee is a Valentine’s Day tradition in our house. I’ll try Jenny’s recipe next year.

Last year, I made this recipe for Salted Butter Caramel Chocolate Mousee which is from David Lebovitz’s “My Little Paris Kitchen” cookbook.

It’s crack in a bowl:
https://www.foodrepublic.com/recipes/salted-butter-caramel-chocolate-mousse-recipe/

Did you know there’s a cafe in Paris that has a classic French chocolate mousse on their dessert menu, but get this….they bring out a huge bowl and you literally serve yourself, as much as you’d like. I’m definitely going there one day!

Chez Janou is the name of the restaurant. I am fortunate enough to have gone twice this year! That mousse is absolutely divine. I tell people it’s the best dessert I’ve ever had, hands down!

Jo actually says the same thing in her post. Read above :)

This looks wonderful!!
I love the Smitten Kitchen Chocolate Budino for a similar (but richer!) treat. One big difference…. the budino can be done from thought to finish in less than 30mins if you have all the ingredients on hand (and I usually do!).
https://smittenkitchen.com/2019/06/chocolate-budino/

So inspired to make a dairy free coconut cream version!

was just thinking the same thing! So, would i just use canned coconut cream?

This recipe should be called “welcome to France”.
It is just the perfect recipe, the way we do it at home here (in France).
Such a classic, such a staple.

We love chocolate mousse here! It was the very first thing I was taught to cook as a child, and it’s my husband’s ever favourite dessert, so at one point we were making it so often that we were sort of tired of it. Have picked it up again lately, serving it in espresso cups for smaller (and fancy-er) portions. The only problem is that I’ve been making it without following a recipe forever, so every time the result is slightly different in texture. But always delicious!

About two years ago, my then 8 year old daughter wanted to learn how to cook a yummy dinner for the family “all by herself”. Chocolate mousse was on her menu and ever since it has become her signature dish. It has become part of our family tradition that she makes every time we go on holiday and since we always go to the same place in France, we have now rapidly become ‘brocante’ (garage sale) shoppers on the hunt for the perfect vintage glass dish(es) to serve it up in! I love how memories are made in special dishes!

I was driving home from my psych appointment last week and had a craving of chocolate mousse so I swung by the shops and grabbed some cream and chocolate and made it for dessert that night. I’m not a fan of raw egg in desserts though so for those who want a non raw egg mousse this is the recipe I use, it’s so good :) https://cookiesandcups.com/easy-chocolate-mousse/

It freaks me out that mousse has raw eggs! Can you eat it while pregnant??

It might be somewhat tempered from the chocolate; there Is a way to temper eggs in the shells it’s pretty tricky, I did it for some Royal icing while my sis was pregnant and I over cooked a few eggs before I got it but idk, nobody got sick! Lol tbh I don’t think I’d eat it pregnant but you’d have to ask someone who knows :)

Uuuuum, I’ve always loved (but never made) chocolate mousse, but that’s a lot of raw egg! Now I feel unsure about eating it or making it, haha!

so strange that the photographer of this is a food blogger, but is using jenny’s recipe? can you explain or give us details or reasoning behind this? are the photos of jenny’s actual recipe?

Yes! It’s Jenny’s recipe and we hired Alexandra to shoot it because we love her photography. We have done this in the past a lot, too. Like here:
https://cupofjo.com/2018/08/easy-salmon-sandwich-toaster-oven/

I have my own secret mousse recipe. It all starts with Woodblock Chocolate…

Yum! I just made a chocolate silk pie which has almost the same ingredients except you also add butter and sugar. So good! The texture is amazing:)

This sounds delicious, oh my!

I moved to Belgium in my early twenties, and I must have looked pretty homesick and overwhelmed (I was trying to learn the language) because my elderly neighbor noticed and invited me over for dinner. She served a glorious chocolate mousse for dessert and I started crying because I was so grateful. She gave me the biggest grandma hug, prattled away in Flemish (I didn’t understand a word—for all I know, she was calling me a wimpy American), and then turned around and started playing Elton John’s “I Guess That’s Why They Call It the Blues” on the piano, of all things. The mousse, the hug, the Elton—I’ll never forget her kindness.

What a sweet lady ! Some people know exactly what we need at the right moment !
It’s about the little things !

Ooooh Sarah I love this story!!! Sounds like the perfect cure for homesickness.

I love this story so much!

What a beautiful story! I currently live in Belgium and chocolate (mousse) is very much part of a balanced diet here for sure :)

We call it “Shhocolate” Mousse at our place – sounds so fancy pants! La-di-da! ;)

This past weekend I got really busy in the kitchen . I was going to meet my sister on Sunday at the train station for a quick coffee. Every time we see each other i love to bake her something so that it reminds her of me throughout the following week .I made her carrot muffins , German stollen and chocolate granola .her husband texted me yesterday saying that I should probably make a second batch of granola ! I believe that food is a way to express your love to someone and I’m so glad to be able to do it !
This mousse is exquisite! I am trying your recipe tomorrow ! This time I’m making it for ME !

I just made chocolate mousse last week for a dinner party! I always hold my breath when I add the chocolate to the egg yolks – terrifying.

It is such a classic in France and your recipe is the exact same recipe my family has been using for generations! It’s just perfect. I love the sound of the first spoon in the mousse, fffffff. I haven’t made it for a few years now (got tired of it), I’ll definitely make some this week-end! The secret: take the best quality eggs and chocolate. AND: use biscuits instead of a spoon, to eat it (childhood memory).

“I love the sound of the first spoon in the mousse, fffffff.” = love that :)