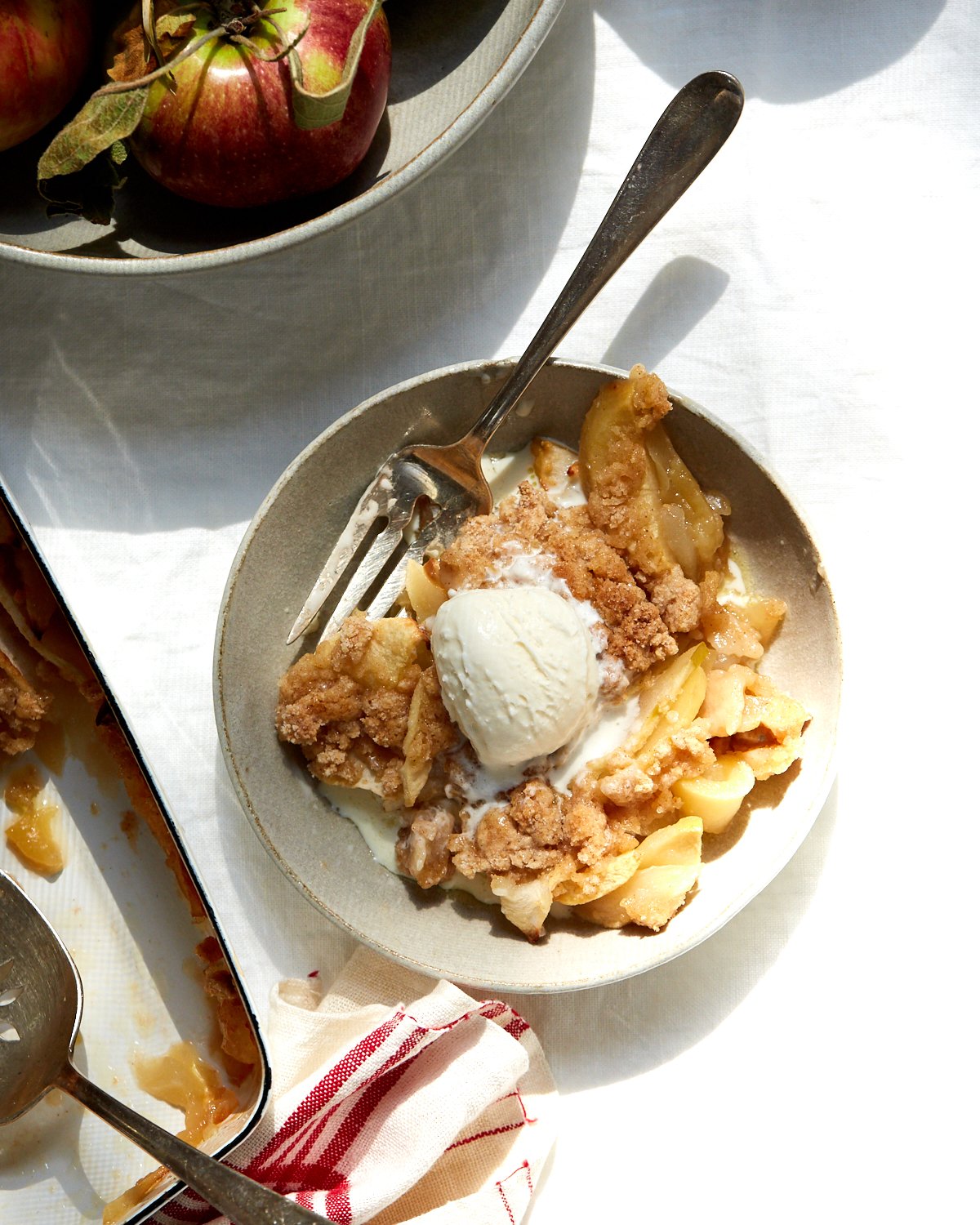 I know what you’re thinking: Does the world need another apple crisp recipe? I am here to tell you yes, yes it does, and so do you…

This recipe is special for many reasons, but let’s just begin with the fact that it’s one for all seasons, which means it is endlessly riffable. You can make it with apples in the fall, berries in the summer, strawberry and rhubarb in the spring, and virtually any combo of fruits from your fruit bowl all year long. I begged my mother-in-law for the recipe more than two decades ago, after she served a peach-raspberry version on a warm summer night, and I haven’t stopped making it since. If there were a leaderboard for Recipes That Have Made The Most Appearances In My House, this would be right there at the top.

Its iconic status might also be due to how simple it is to assemble. You cut the fruit right into the baking dish (no mixing bowl, one less thing to wash) and toss with lemon juice; the topping is made of ingredients you most definitely have in your house right this second; and unlike a lot of crisp and cobbler recipes, it does not ask you to hand-smush a stick of room temperature butter into the sugar-flour topping. You simply melt the butter and drizzle it over the whole shebang before it goes into the oven. 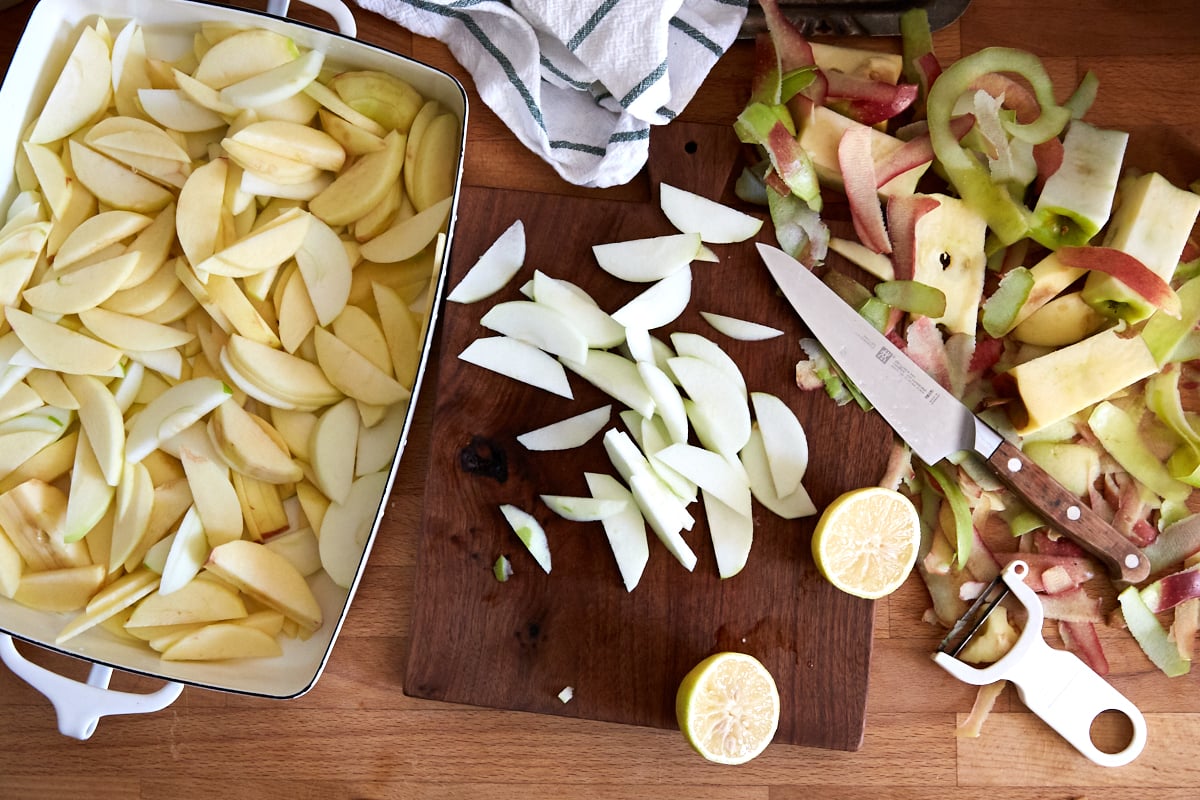 If you are going down the apple road, you should try to track down tart-sweet apples that lend themselves to baking: Honeycrisp, Jonagold, Mutsu, Granny Smith. (Shown above: A mix of Mutsu, Gala, and Macoun.) But again, flexibility is the name of the game here — my feeling is whatever apple you have in the bowl is the best apple for the job. P.S. I’ll bet no one would complain if you threw some cranberries into that baking dish. 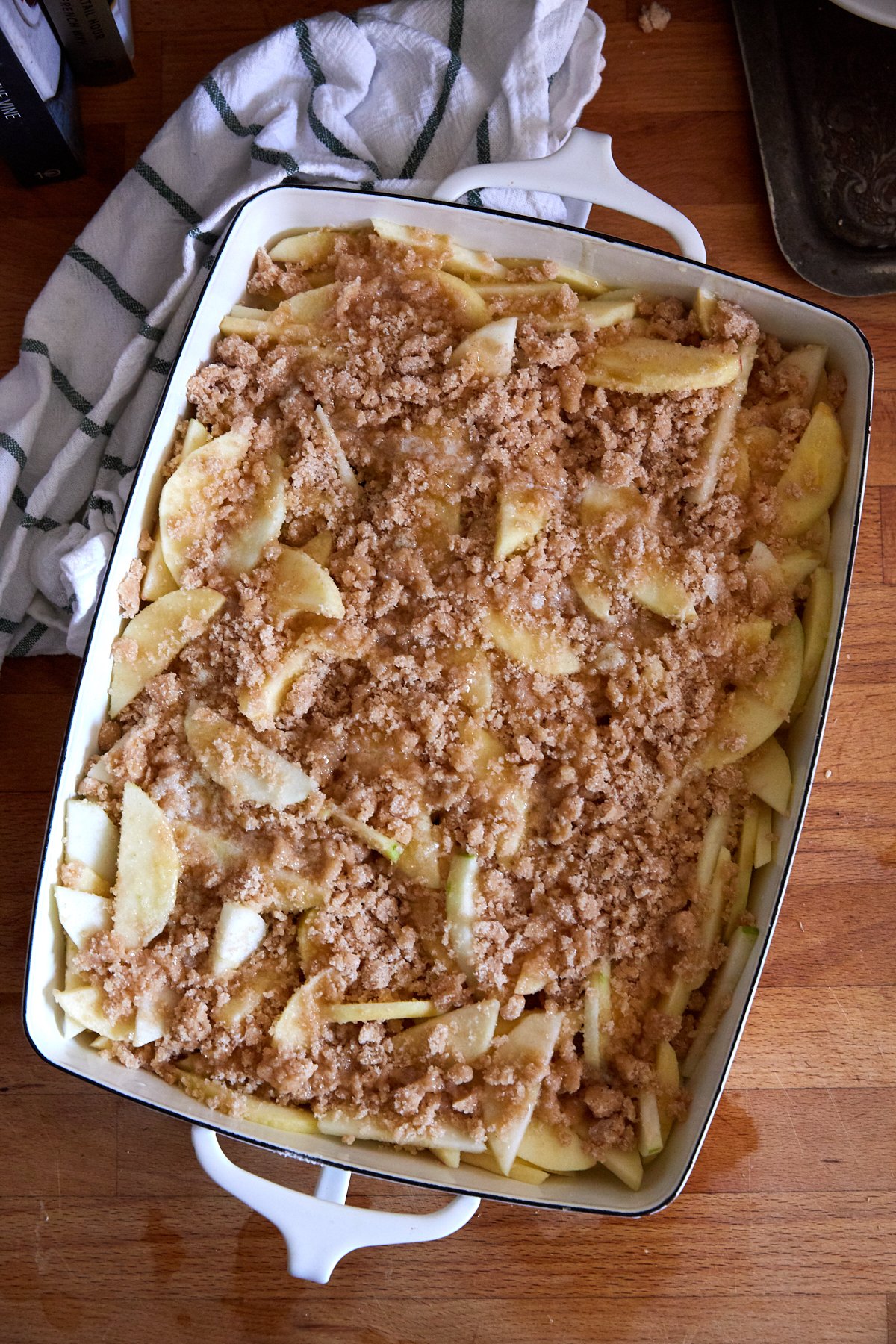 When I stay in vacation rentals, I’ve been known to pack a bag of pre-made topping (flour, sugar, salt, cinnamon), so I don’t have to buy (then waste) a bunch of dry ingredients. I just head to the local market, figure out what fruit is fresh or local, and the dessert box is checked. 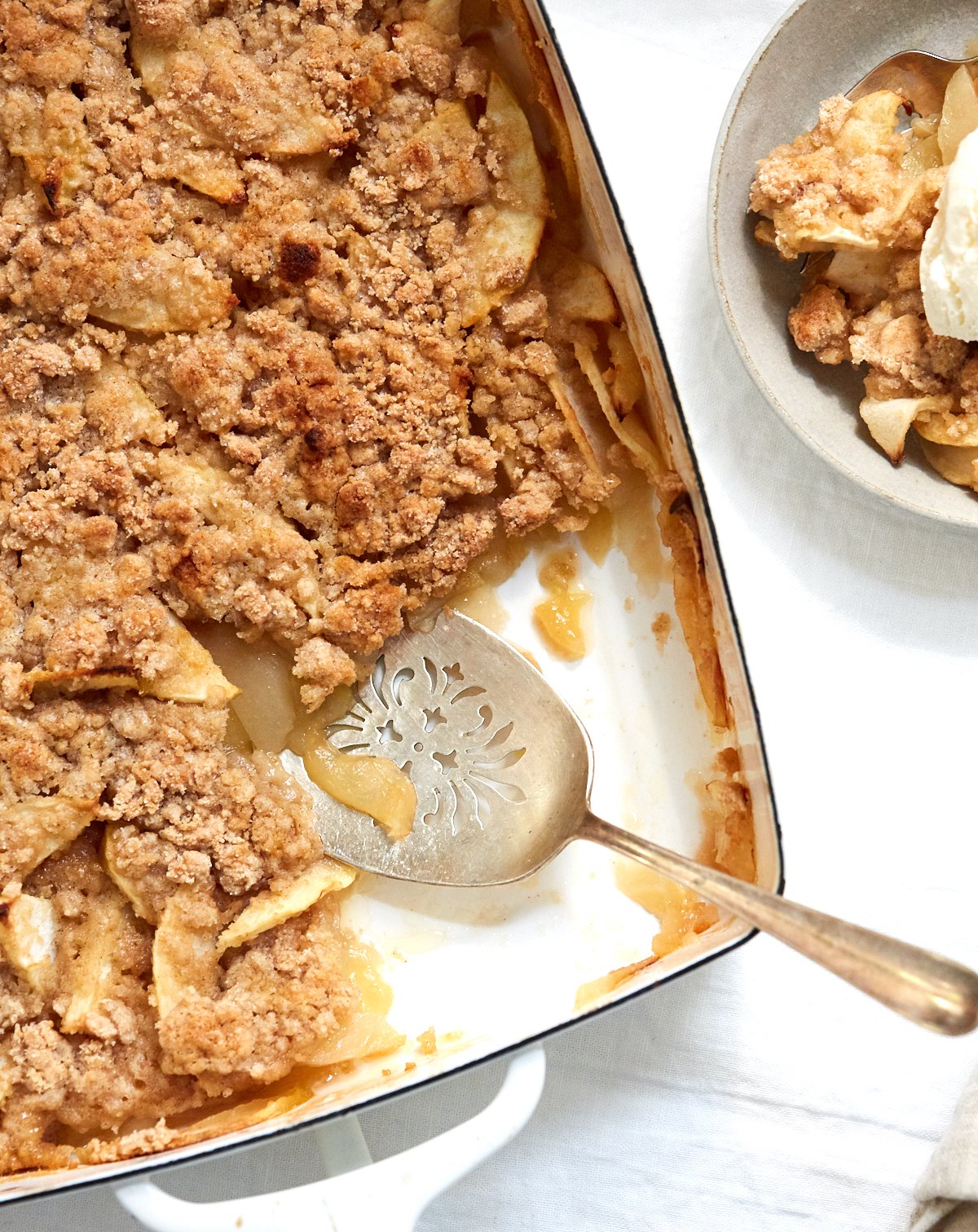 The topping manages to snake down through the fruit while it bakes, so there is crispy-buttery deliciousness in every bite. 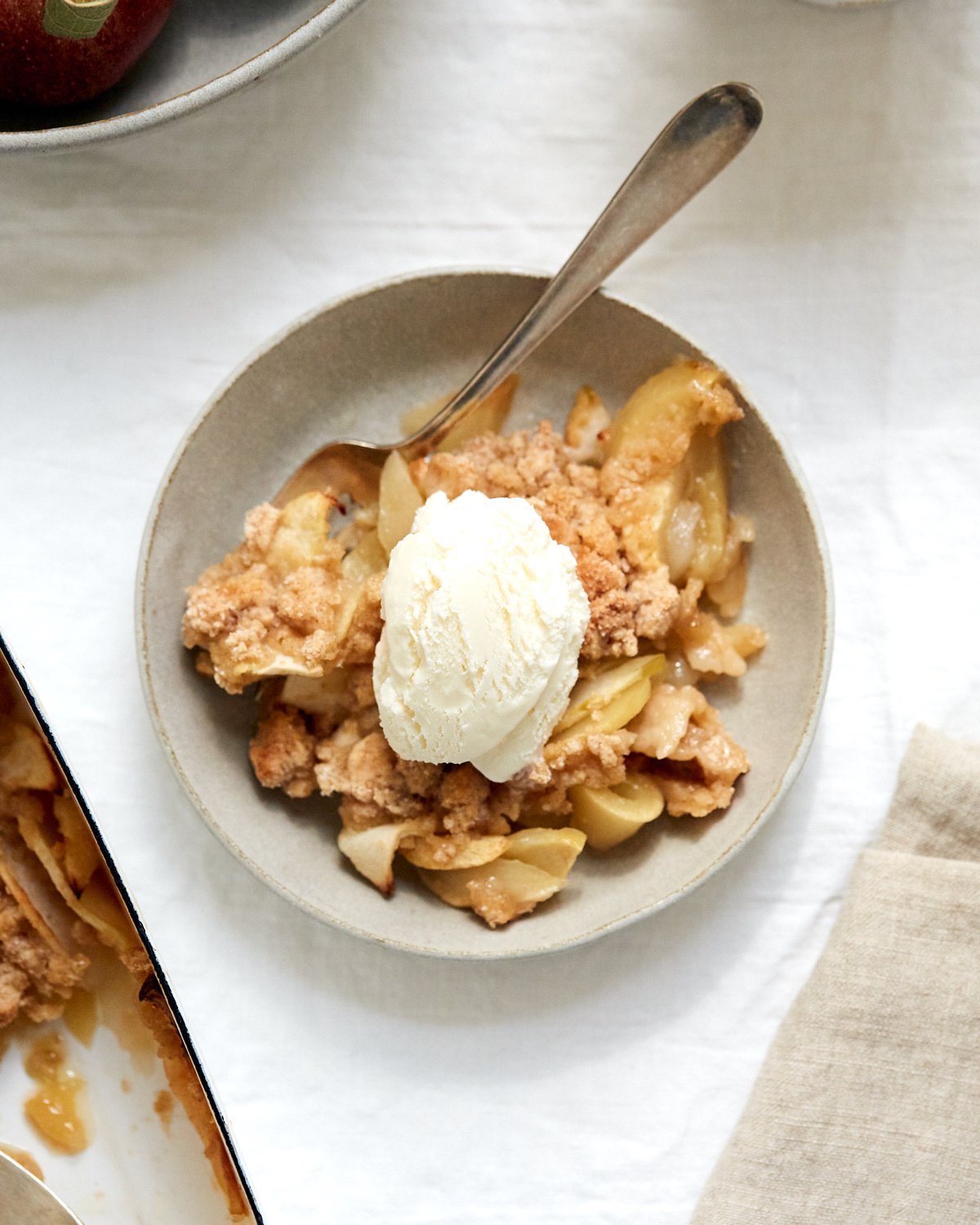 And of course, whenever possible, serve warm with vanilla or cinnamon ice cream.

Apple Crisp
(Again, feel free to replace the apples with any combination of fruit you have on hand: peaches, nectarines, blackberries, raspberries, blueberries, pears, cranberries it’s all fair game.)

Preheat oven to 375°F. Place fruit in a 13-by-9-inch baking dish. Sprinkle on lemon juice and toss. In a medium mixing bowl, whisk together dry ingredients. Add egg, tossing with fork until mixture is crumbly. (It should not be mushy.) Sprinkle flour-egg mixture over fruit (nestling it in between the apples, too), then drizzle the melted butter as evenly as possible all over the top. 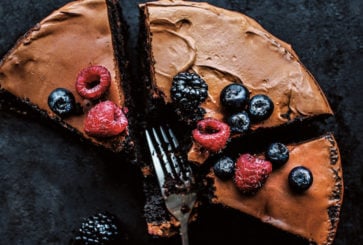 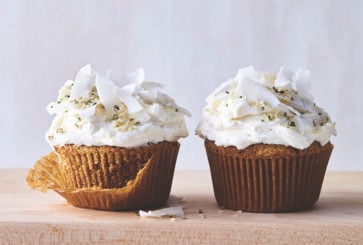 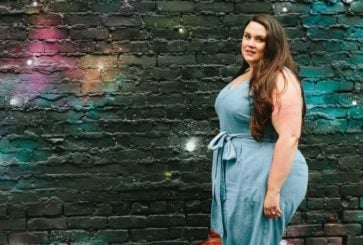 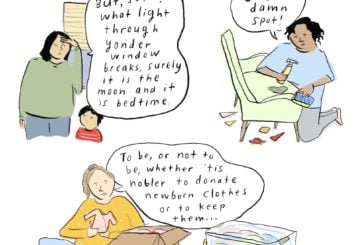