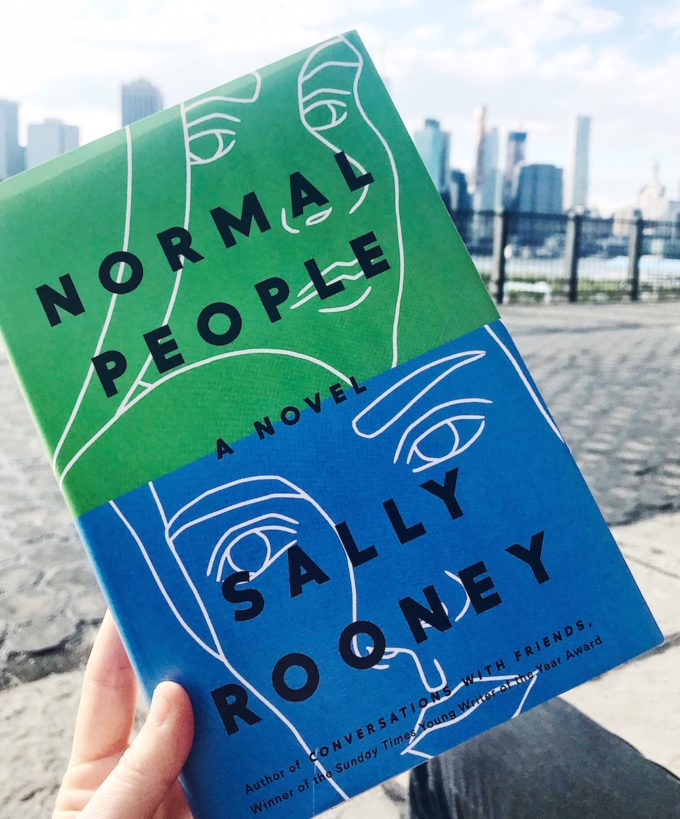 And now, for one of our favorite topics: books. What are you reading these days? There is no shortage of amazing books right now and we are here for it. Both fiction and nonfiction, from hilarious to poignant, here’s what we’re reading right now… 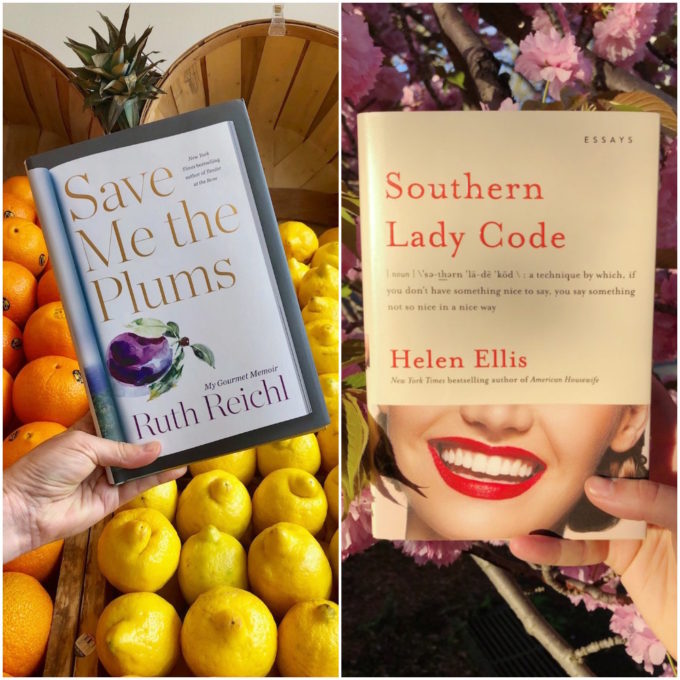 Save Me the Plums by Ruth Reichl
Confession: I don’t care about food. Don’t get me wrong — I eat food, I make food. Sometimes, I’ll get unnaturally excited about a bucatini cacio e pepe. But I am not one of those people for whom reading about flavors and textures and ingredients holds any weight. That’s how good Ruth Reichl is: she’s a writer, who just so happens to focus on food. And anything she writes, I will read. Reichl’s latest memoir chronicles her time as the editor-in-chief of Gourmet, and covers everything from wavering over accepting the job to not knowing how a magazine works to worrying how to be a boss to the very real guilt of balancing career and parenthood. She approaches every subject in her frank, friend-who-tells-the-best-stories-and-keeps-no-secrets way. The result is compulsively readable, much like — sorry, can’t help myself — a dish you want to gobble up.

Southern Lady Code by Helen Ellis
At first, I did not want to read Southern Lady Code. The cover was cute. It came recommended by people I trust. But I am not a Southern lady, and I feared the humor would be lost on me. I could not have been more wrong. Southern Lady code is “the technique by which, if you don’t have something nice to say, you say something not-so-nice in a nice way.” This essay collection had me howling — truly howling — with laughter. One evening while reading, my boyfriend put the newspaper down to say, “WHAT are you laughing at?” which prompted me to read an entire chapter aloud. Ellis describes everything, from puzzles to airplane etiquette to riding the subway with a panty liner stuck to her back, in a way that is very, very funny. Run, don’t walk. 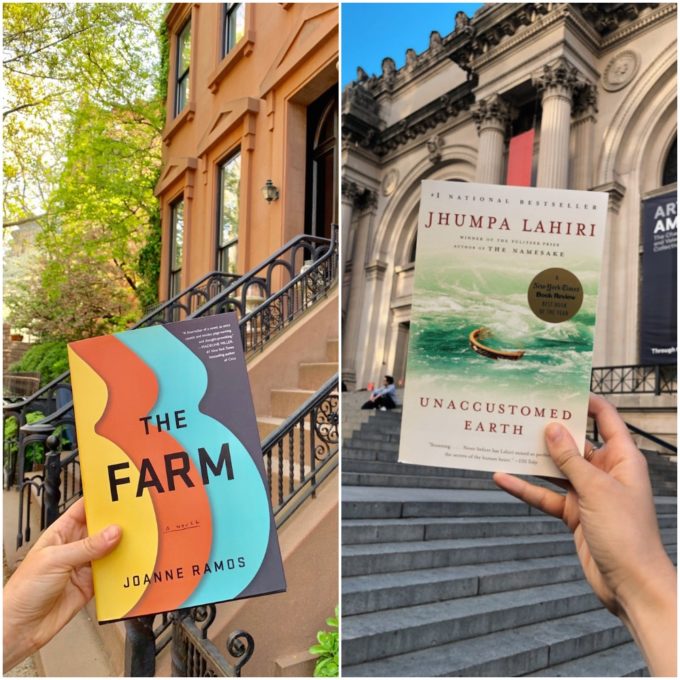 The Farm by Joanne Ramos
Full disclosure: I just started The Farm last night, but you know those books that immediately draw you in and suddenly you can’t think of anything else? Joanne Ramos, formerly a staffer at the Economist, wrote this debut novel — a cracking, chilling but also human page-turner about Jane, a Filipino immigrant, who goes to “The Farm,” a retreat where for nine months, you get organic meals, daily massages and big money. The catch? You can’t leave the grounds, you’re constantly monitored and you’re cut off from your regular life, while you focus on producing the perfect baby — for someone else. If you liked The Handmaid’s Tale, I think you’ll love this book. Can’t wait to read it in bed tonight.

Unaccustomed Earth by Jhumpa Lahiri
A few weeks ago, when I wrote about my newly discovered love of short stories, I was thrilled when people chimed in with favorite collections. The author that got the most shout outs was Jhumpa Lahiri. (“I’ve found my book soulmate,” said Nigerian Girl; “Yes, yes, a thousand times yes to Jhumpa Lahiri,” added Alina.) Lahiri won a Pulitzer for her first book, Interpreter of Maladies, and a movie was made from her novel, The Namesake — but I decided to start with her 2009 collection Unaccustomed Earth. Like most of her writing, Lahiri focuses on the Bengali immigrant experience in America, zeroing in on themes of belonging, family and home. As commenter NK said, “What is most impressive to me is there’s often nothing exceptional about the setting or person. But man… she gets it.” A big thank you to those who recommended this beautiful book. 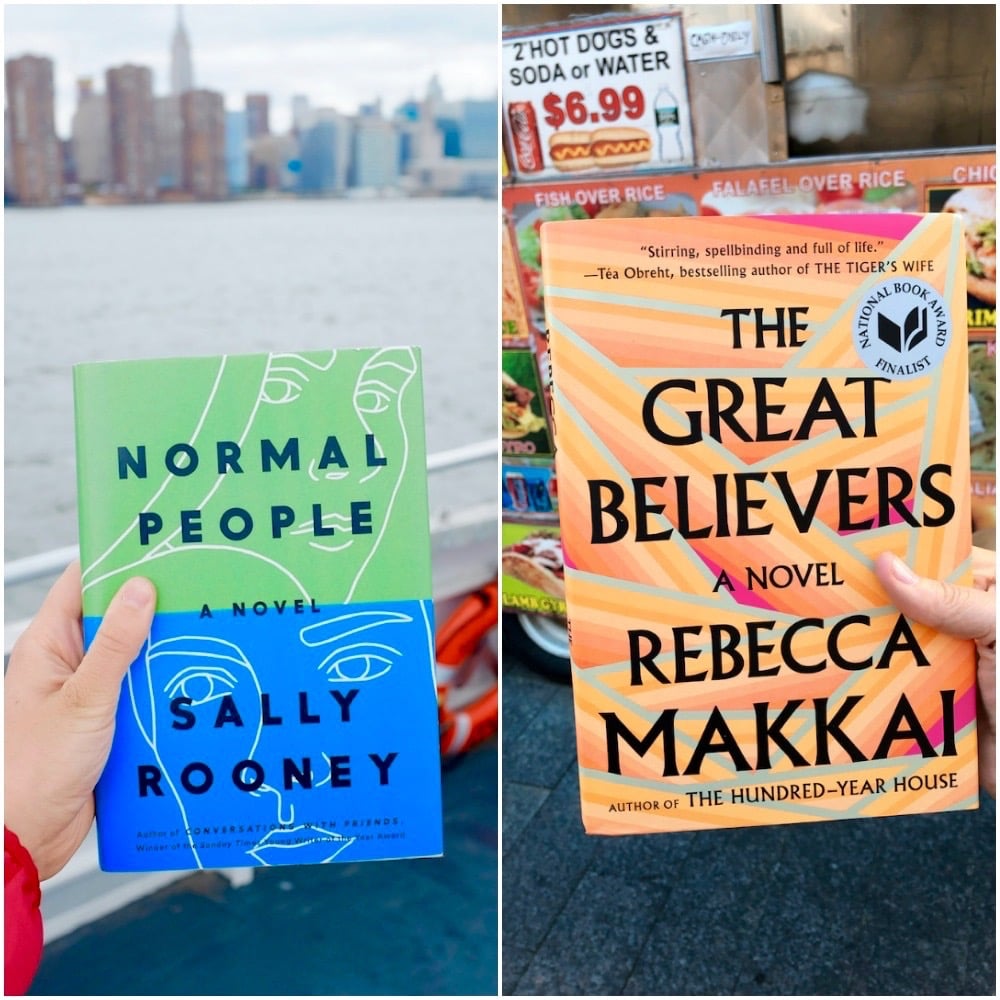 Normal People by Sally Rooney
This is one of those novels that a) you don’t want to ever end b) when it ends, you can’t bring yourself to read anything new because you want to live in the story for as long as possible. Rooney, who is 28, broke onto the scene two years ago with her critically acclaimed (and wildly popular) Conversations with Friends. Her second book follows two Irish high school kids who hail from different worlds: Connell is working class and popular, Marianne is wealthy and weird. Once they head to Trinity College in Dublin, the ever-present tension of these basic truths informs their love story as it evolves from secret and sexual to deep and beautiful to intense and life-saving. I handed the novel to my 17-year-old daughter the second I finished; a day later, she passed it on to her 15-year-old sister. So, we all got to live together in Rooney’s world for at least a little while.

The Great Believers by Rebecca Makkai
Yale Tishman has his life all planned out — he’s the director of a small gallery at Northwestern University, about to make a puts-you-on-the-map acquisition; he’s in a long, stable relationship with the publisher of Chicago’s leading gay newspaper. He even has his dream home picked out, and spends several memorable (and heartbreaking) scenes gazing up at its windows picturing his promising future. But this is Chicago in the ’80s, the height of the AIDS epidemic, and the scope of the disease’s destruction is cruel and unavoidable. Makkai alternates between Yale’s story and the story of his friend Fiona, whose brother (Yale’s friend) dies of AIDS before the book begins. Both threads explore the privilege and burden survivors experience when they become responsible for carrying on someone’s memory. The Pulitzer Prize finalist was my first Makkai book (others swear by The Hundred Year House) and I won’t forget it any time soon.

What are you reading right now? Have you read anything great lately? We’d love to hear…

P.S. 15 reader comments on books and more amazing books you may not have read yet.

By Joanna Goddard
Design
What Have You Been Reading Lately?
September 18, 2018