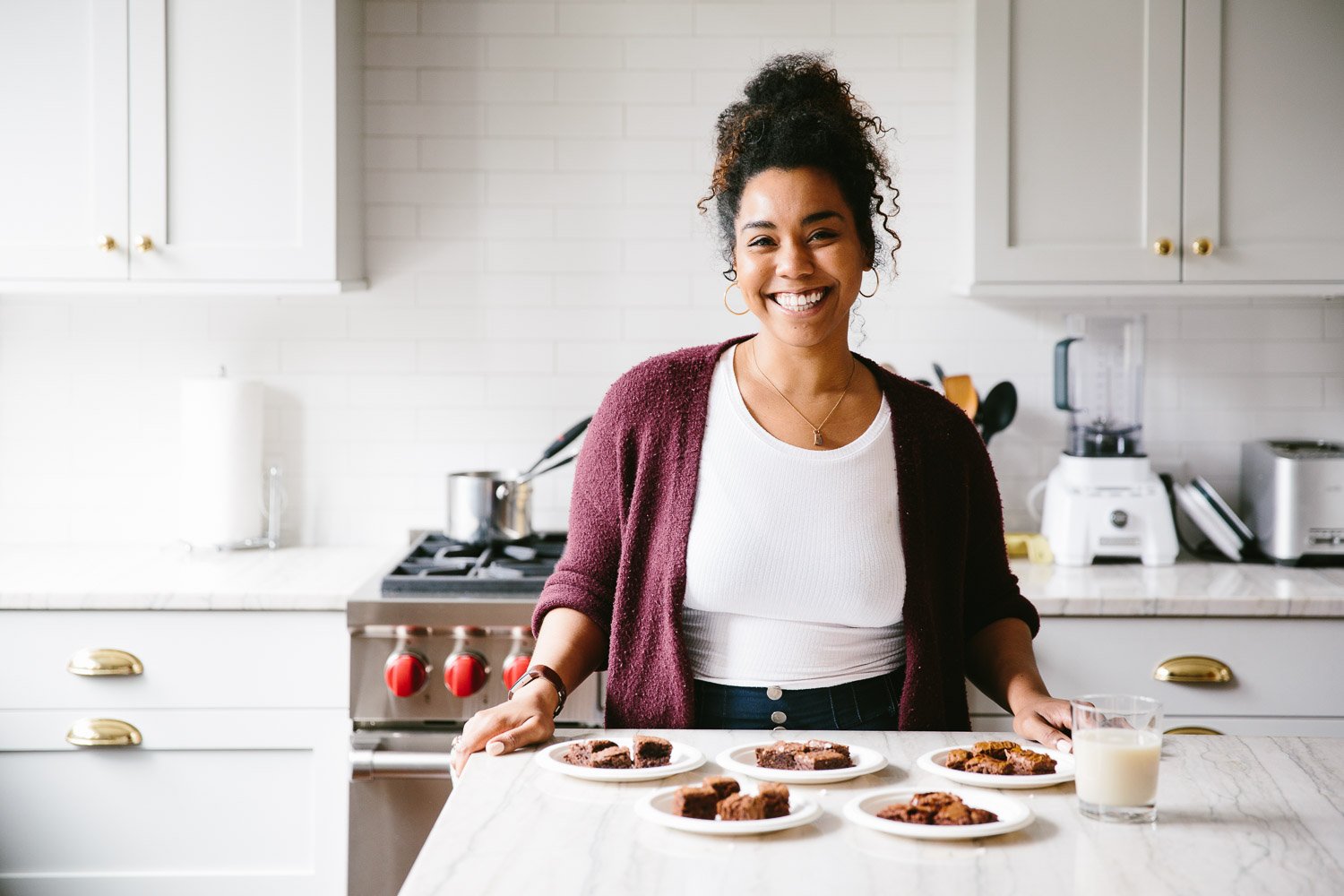 I’ve never made a batch of brownies from scratch that could compete with the ones I’d bake as a kid, the box mix kind that call for two or three eggs and some hydrogenated oil and maybe even a “chocolate flavor packet” if you feel like getting fancy. For a significant portion of my adult life, when the bake sale required brownies, I’d deliver a from-scratch Alice Medrich batch, only to watch the kids bypass my sea-salt-sprinkled beauties for the crinkly-topped box kind with its (somehow delicious) artificial aftertaste. These kids are no dummies.

Eventually, I accepted the fact that no homemade brownie — no matter how artisanal or cheffy — would ever win in the fight against nostalgia. A realization, of course, which begged a very important question: Which supermarket box mix brownie is best? 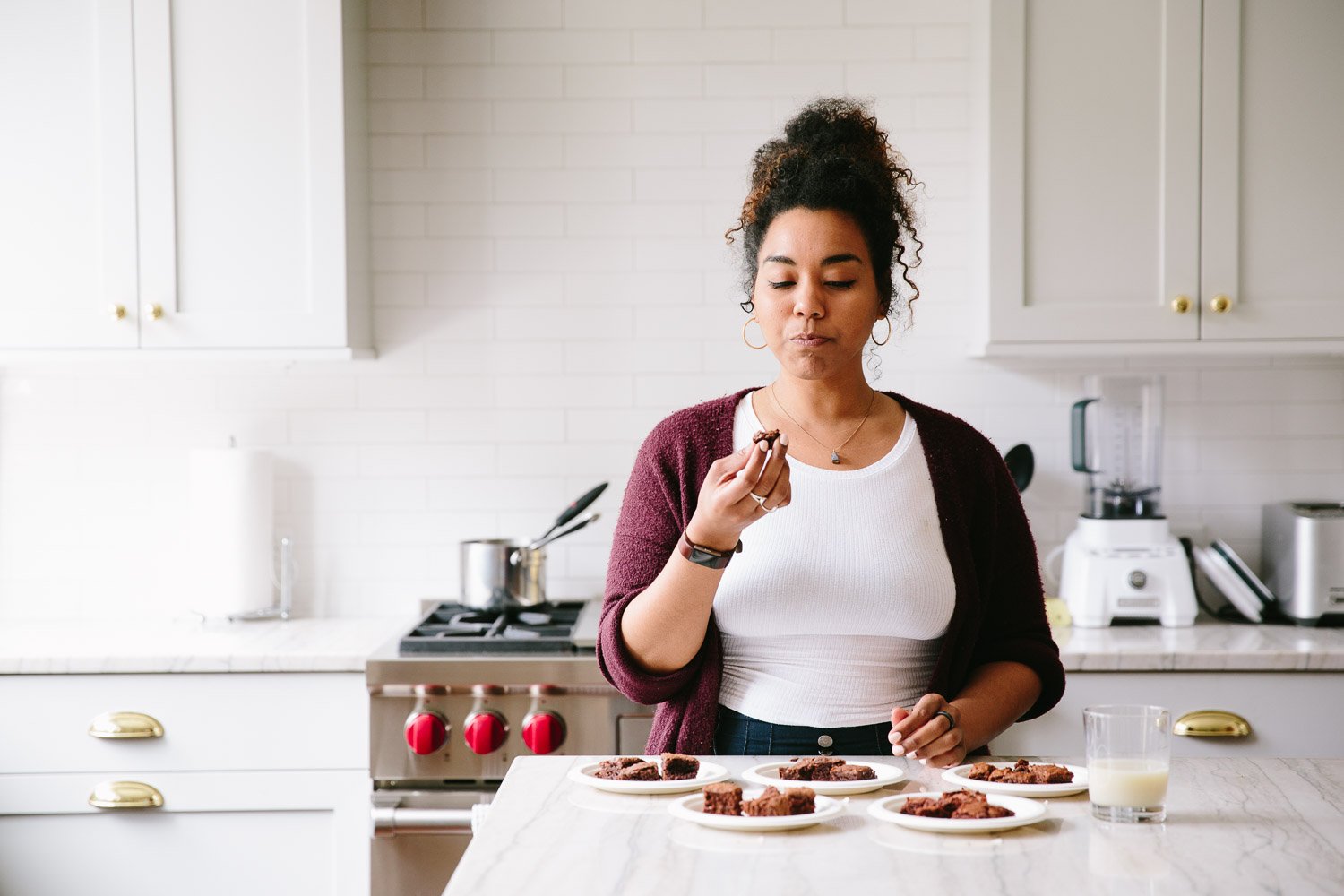 We turned to an expert to make the call. When we found out that Chocolate For Basil‘s Jerrelle Guy was swinging through town from Dallas for the James Beard Awards (her awesome book Black Girl Baking was nominated), we jumped on it and organized a box mix brownie taste test. 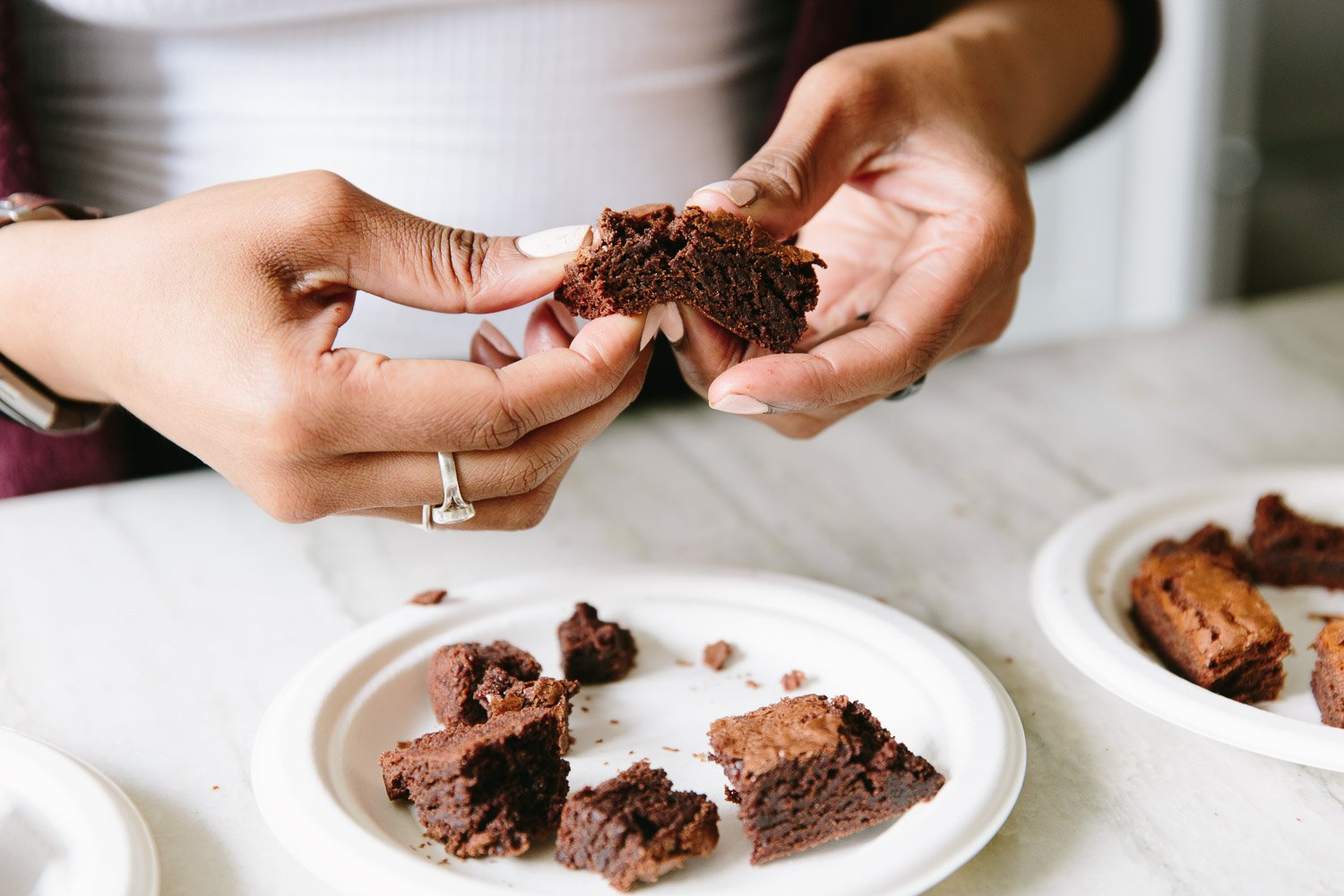 Not surprisingly, Jerrelle, who describes herself as a “hypersensitive baker” in her book, has a very specific idea of what makes the ideal brownie: “It has to have a sturdy edge and be fudgy in the middle,” she told me, while surveying the array of baked goods before her. “In a perfect world, my ideal brownie is warm, and I’m an edge girl, so a double-edge brownie is going to always have a leg up.” What about chips? I ask. “No chips or anything else!” she said, as though I’d suggested arsenic. A purist! Just as we figured. 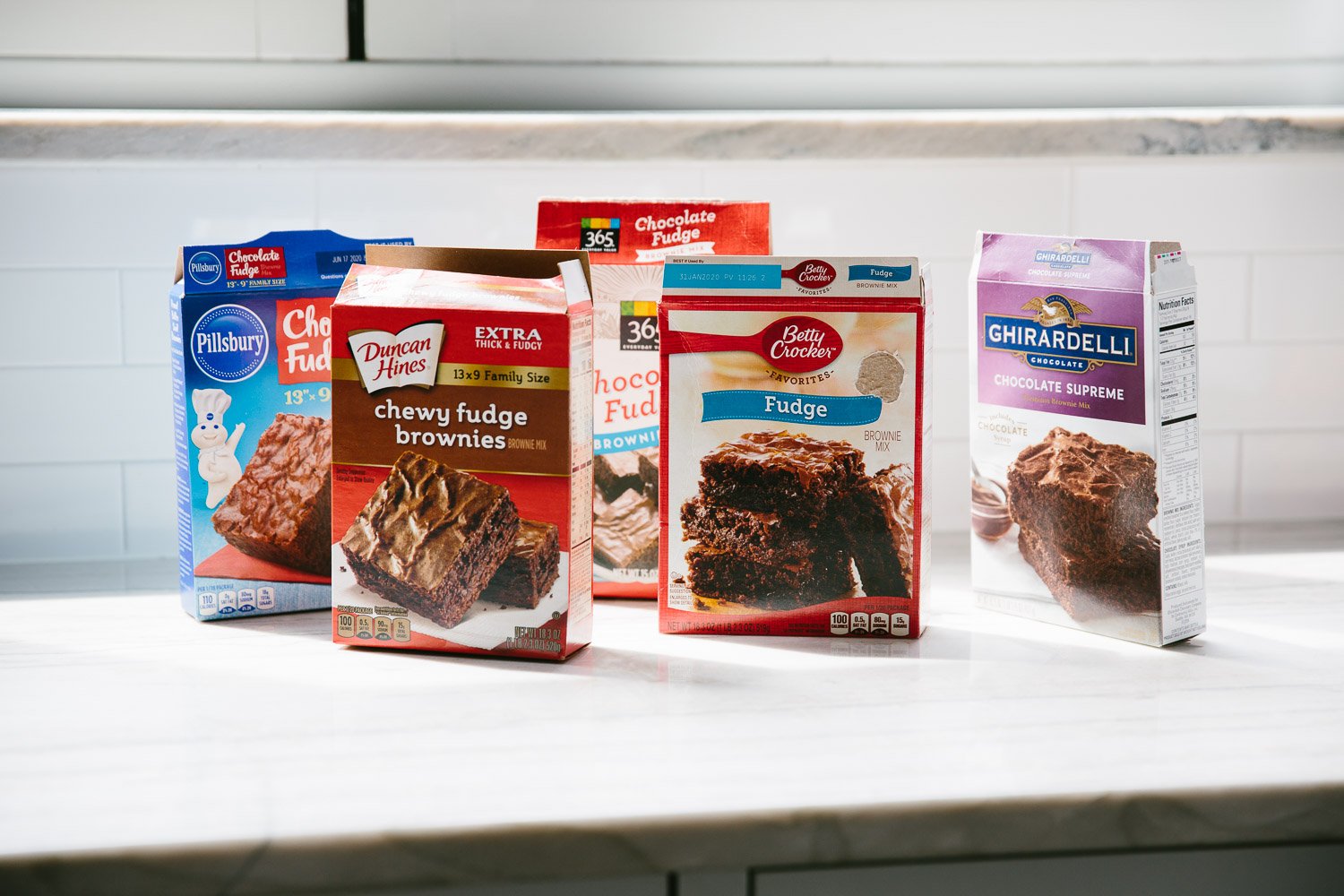 Jerrelle tested five of the most widely available brands: Duncan Hines, Betty Crocker, Pillsbury, Whole Foods and Ghirardelli. Almost all of these brands have a line of brownie mixes — Fudgy, Chewy, Cakey, Milk Chocolate, Dark Chocolate, Double Chocolate, Triple Chocolate, Chocolate Supreme, you get the idea — so to keep things as straightforward as possible, we decided to test their “Chocolate Fudge” versions. All were baked according to package directions, which for the most part was in a butter-greased 9-by-9-inch dark-coated baking pan at 325°F. 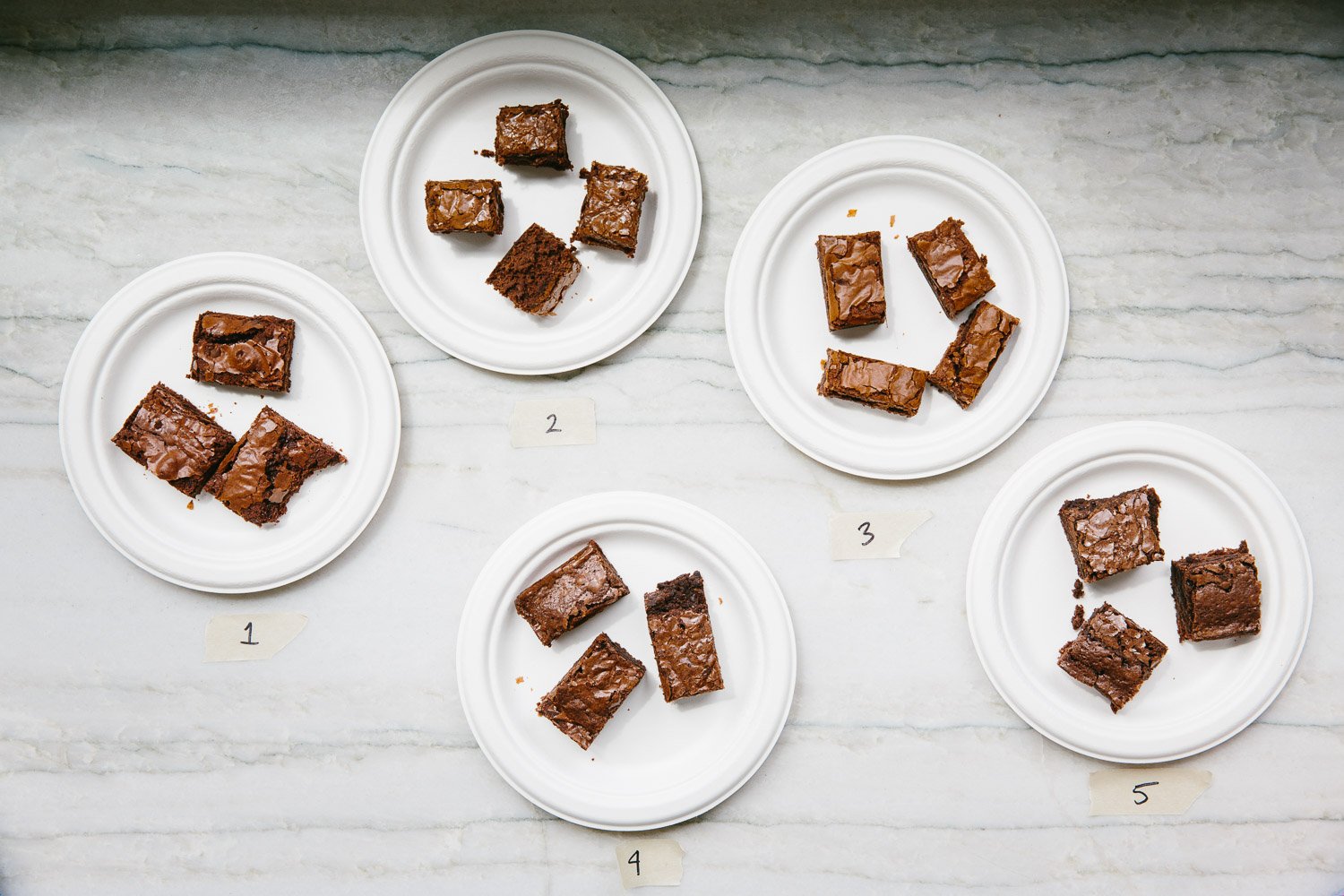 Like all of our taste tests, this one was blind — Jerelle didn’t know which brand she was trying. Between each bite, she cleansed her palate with a few sips of oat milk. 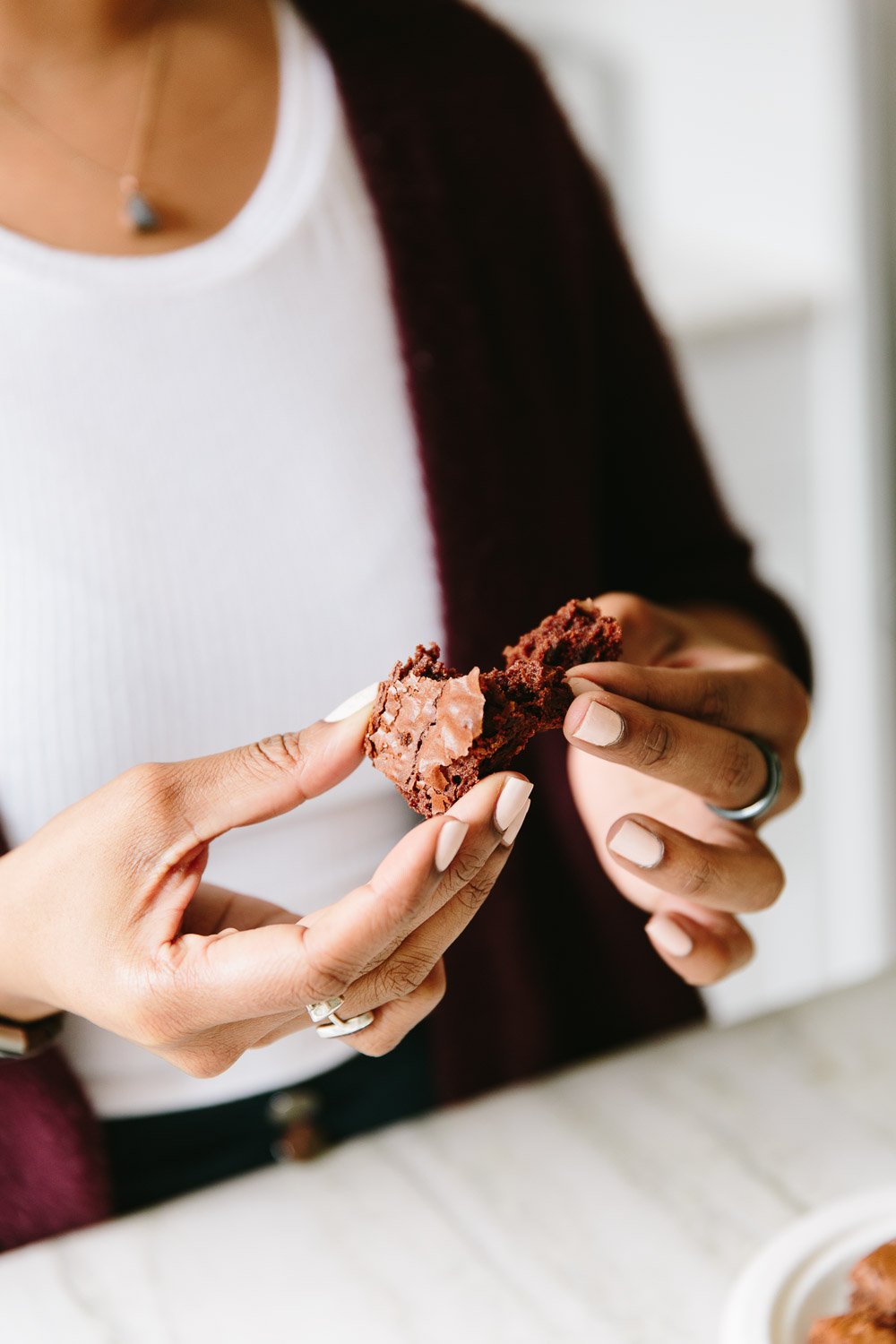 As she chewed and analyzed, I asked her to report on the following factors: texture (was it dry? fudgy? cakey?); crinkliness (obviously what it looks like on top is a huge consideration); and flavor (was the chocolate authentic or artificial tasting, keeping in mind, one might not necessarily be better than the other?). Finally, as I played stenographer in the corner of the kitchen, I asked her to give an overall score, from 1 to 5 (5 being the best). 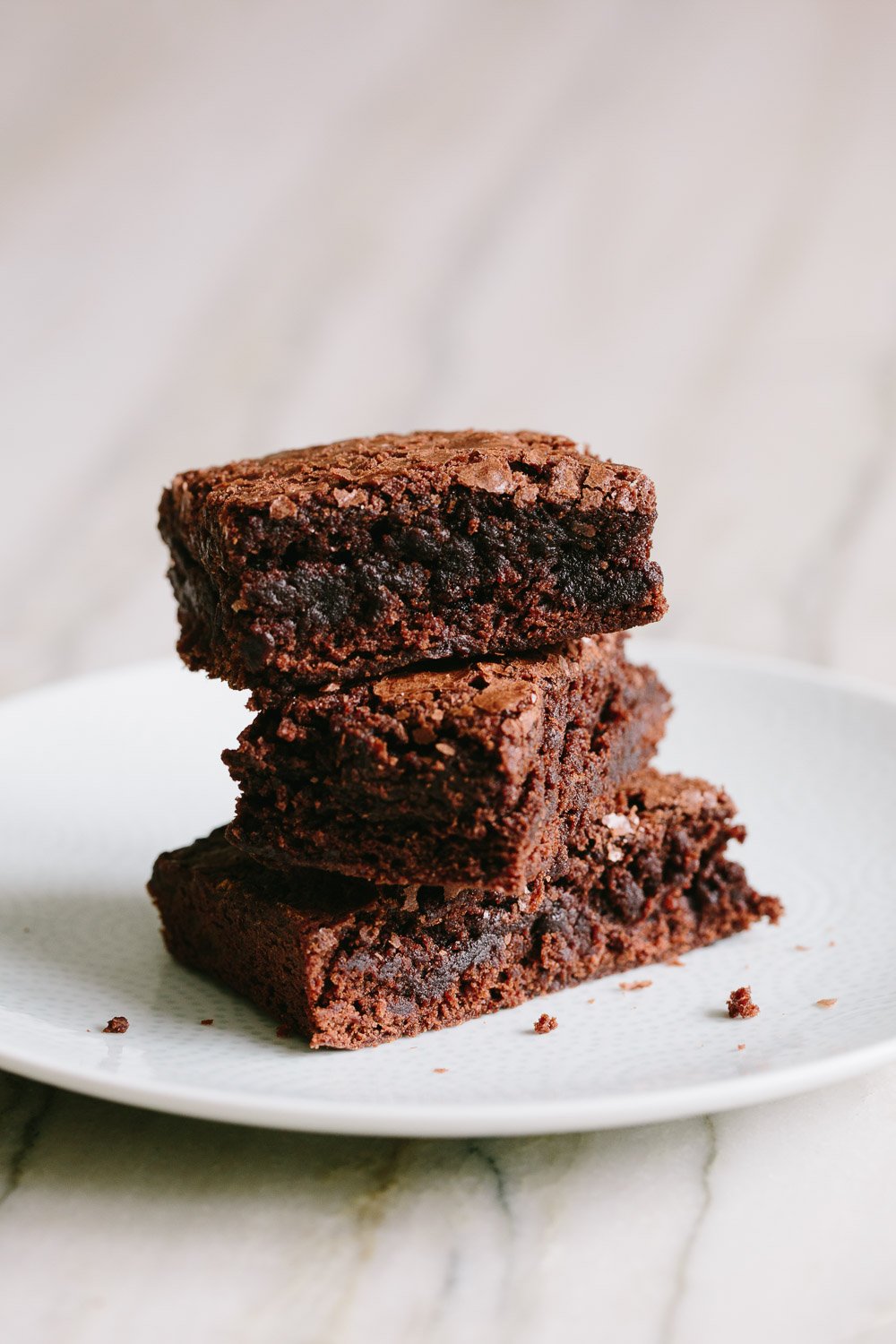 #1: Pillsbury Chocolate Fudge (The Winner!)
Score: 5 out of 5 points

“This one wins,” Jerrelle said definitively as soon as she took a bite of the Pillsbury. It was the last one in the lineup, and it followed Duncan Hines, which was her childhood favorite (“I always remember Duncan Hines as the special one, the fancy one”), so this news was no small thing. “The flavor is better than all of them,” she reported. “The chocolate has a nice roundness. And it’s soft chewy, not dense chewy.” As for the crucial texture on top: “I like that the top is thin and crackly, but that I still get a chewiness,” she said, closing her eyes. “Which is really an accomplishment. I’ve gotta give it a 5.” Wow. 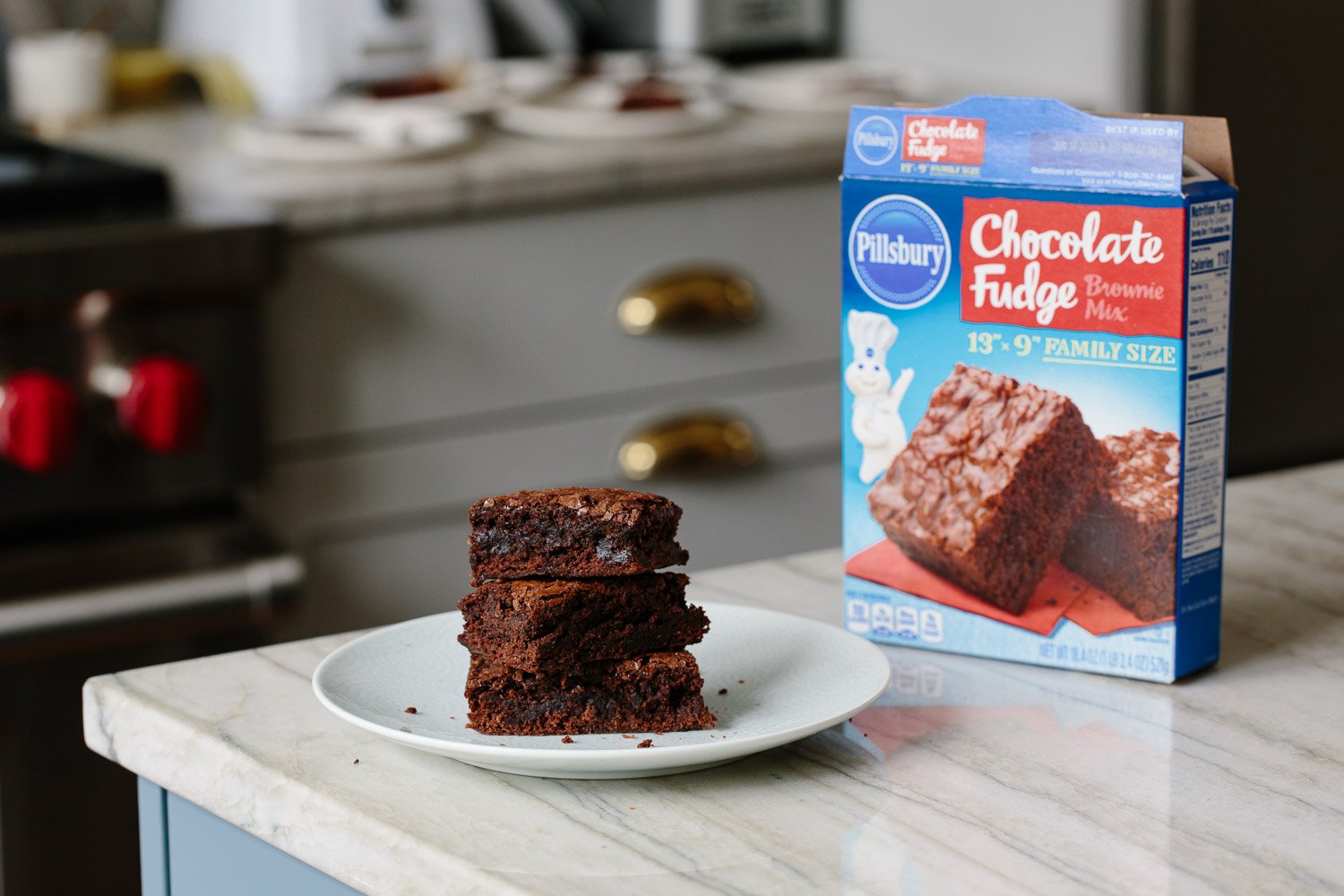 You could see all kinds of synapses lighting in her brain when she took a bite. “Oh, this one is nice! Tastes almost buttery to me.” (Note to reader: Definitely no butter.) “Something special about this one,” she reported, clearly tapping into something sentimental. “I give it a 4.5.” (So close!) 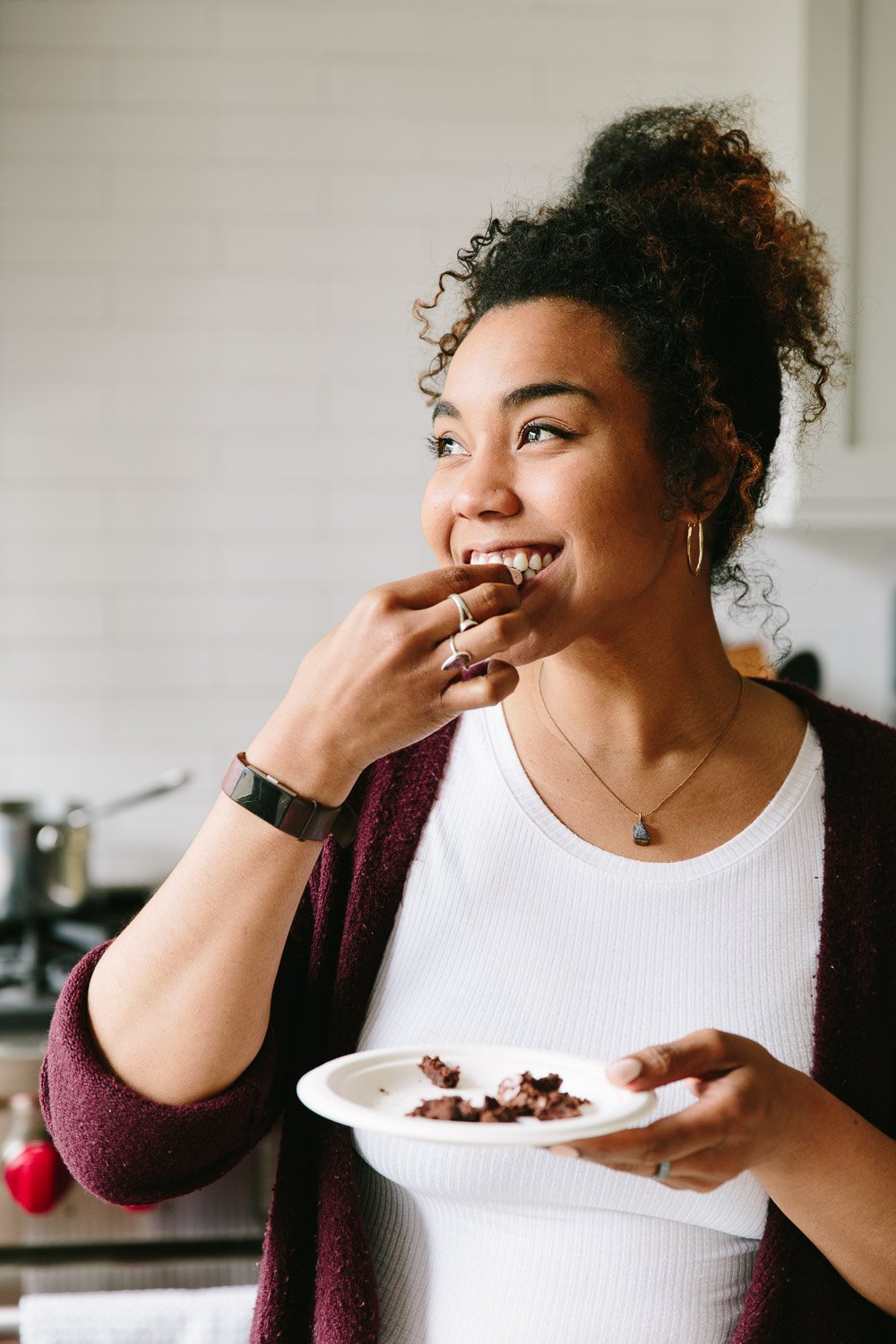 As for the rest of them?

#3: Ghirardelli, the most expensive brand, still scored well — 4 out of 5. “My mom likes her brownies cakey, and she’d really like these,” she said. “You can tell it would be good with ice cream.”

#4: The Whole Foods’ brand (scoring a 3.5) was a little too cakey. Still, Jerrelle appreciated the richness of the flavor, which reminded her of a strategy she uses in her own kitchen. “I add espresso to my chocolate baked goods,” she said, which enhances the flavor. (Pro tip! And no, this doesn’t make her chocolate taste like coffee.)

#5: Lastly, Betty Crocker scored the lowest — a highly specific 2.9 — because she thought they tasted “chemically.” 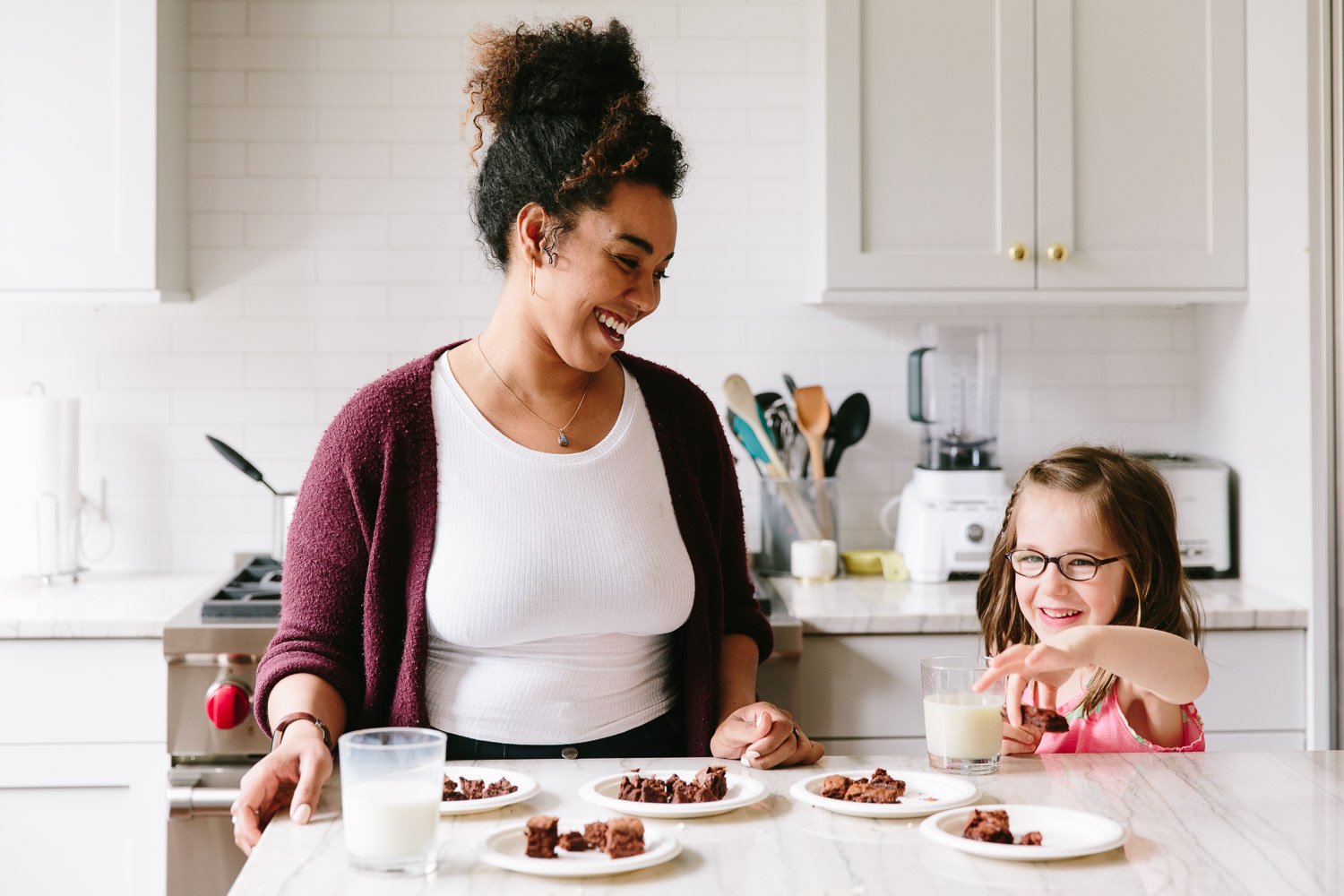 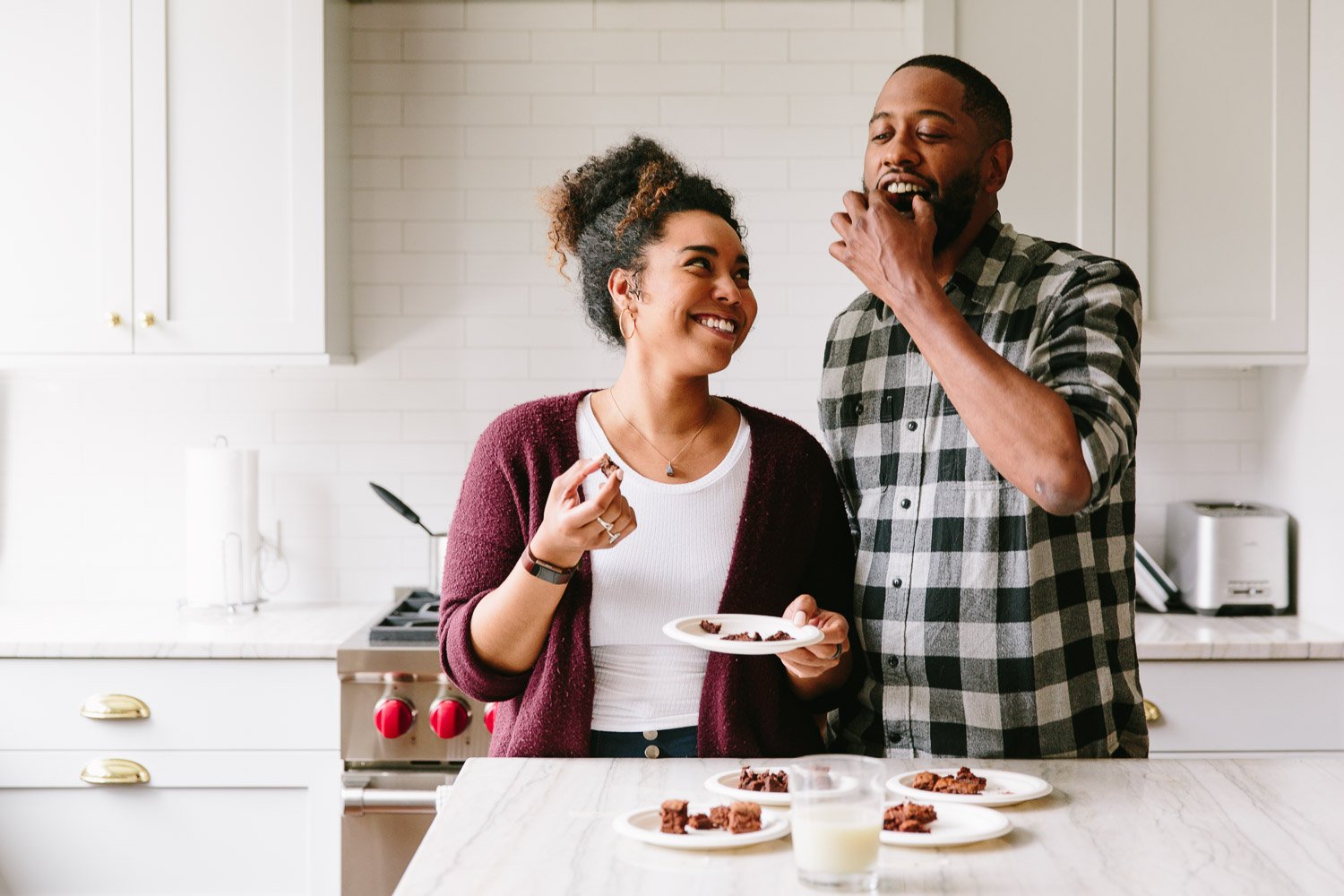 What was most interesting about the experiment was how many helpers came out of the woodwork to assist with the taste testing. (Shown above: Sadie, who lives in the home where we held the photo shoot; and Eric, Jerrelle’s boyfriend.) Can you blame them?

Thank you so much Jerrelle! We love your book! For more Jerrelle, you can follow her on instagram.

No other recipe, boxed or otherwise, even comes close. 3000 reviews folks! And all you do is melt butter and stir it all together. How could a box be easier than that?

Unrelated but important- what is this nail polish called?

right?! Her hands and nails are perfection.

I always make the Alice Medrich brownies, to the point that people are disappointed if I show up to an event without them!! (though that is when I am baking for adults … kids don’t care what kind of brownies they are!). But for year, my go-to was Duncan Hines Triple Chocolate Chunk mix, slightly under baked for maximum fudginess.

The Katharine Hepburn brownie recipe first appeared in the August, 1976 issue of Ladie’s Home Journal. I have the clipping. If I don’t make those brownies, I make Betty Crocker Fudge Brownies. I think they’re the best box mix.

My mom has always taught me to use two boxes of brownie mix in one 9×13 pan. You have to bake them a lot longer, but you get these super thick and delicious brownies. So good!

My entire life my dad has had a few boxes of brownie mix in the pantry at all times. We call them Emergency Brownies, because you knew that if you were having that kind of day a warm brownie was just twenty minutes away (and then the whole house smells like brownies which is a pick me up on it’s own.)

I love this! Because sometimes you really do just desperately need brownies. They are so comforting.

To my eternal shame, I’ve been baking and sharing box mix brownies for years – and lying about it out of embarrassment! Friends would gush and ask for the recipe, and I WOULD GIVE THEM A RANDOM RECIPE, knowing it wouldn’t come out like my brownies because mine came from a box! This is one of my biggest, most shameful secrets. Shhh, don’t tell anyone! :)

hahaha that’s sneaky !!
i would have done exactly the same !!!!
i love the idea of secret recipes … when you’re just thinking ” if you only knew “

I HAVE TO TELL YOU THIS. Trader Joe’s GLUTEN FREE Brownie Mix is hands down the best brownie you will ever taste, boxed or not. I accidentally bought it one time and when I got home was so bummed it was gluten free, thinking they were going to taste like chalk, but I made them anyway. There is never a better time to say O.M.G. Now I buy them pretty much weekly and are a staple to take to parties.

Yes! I love these! I bought a brownie at a school event bake sale and later emailed the mom who made them for the recipe because they were so good. She emailed me back the following recipe: “Go to Trader Joe’s and buy their gluten free brownie mix. Follow directions on box.” I make them all the time now.

I’ll try these – I wanted to weigh in to say no results are final unless you add Trader Joe’s Truffle Brownie mix to the test. I tried a zillion different recipes in the first years of knowing my stepson, and this mix was superior to all of them.

Boxed brownies used to be my jam, until an NPR segment with Thomas Keller changed the brownie game. Easy to make, so much butter, but oh so delicious. Fudge, chocolate goodness. Must be undercooked :)

yes! all baked goods should be slightly undercooked! My husband calls my chocolate chip cookies “warm dough” that’s how i like them.

Just a quick thank you for this VIP – very important post. No more pondering for for.ev.er over the insane brownie selection at Safeway.

I make the brownies out of the kids cookbook Clueless in the Kitchen and they are dangerously easy and so good. I like to use a coffee liqueur (like Tia Maria or kahlua) in place of vanilla extract in the recipe.

My favorites are pillsbury milk chocolate, and Duncan Hines. Unbeatable.

I’m going to have to respectfully disagree here because the Betty Crocker ones are the best. Have to undercook them a tad every time, though.

I love the Ghirardelli ones, and yes, they are very good with ice cream. Try them with coffee, dulce de leche or black raspberry ice cream. But they are just fine with classic vanilla, too!

I love this recipe!

I am not GF but Bob’s Red Mill GF Brownie Mix wins, hands-down (sorry, Pillsbury!). Especially when I add a teaspoon of instant espresso powder or swirl in some peanut butter!

I was looking for a non-dairy brownie recipe and discovered the wonderful world of olive (or other) oil brownies. Oil rather than butter is the key to box-like brownies, and they are really easy to make and very delicious. This is the recipe I’ve been using: http://www.simplemathbakery.com/blog/2010/02/28/olive-oil-brownies. My pan is larger, and I double the recipe and keep a close eye on the doneness. These are always a hit.

This was so much fun and so fascinating to read! My husband and I are partial to Ghirardelli. And she’s right, it does go well with ice cream :)

Box mix brownies are my love language and hands down Duncan Hines is best!

I go with boxed just because it’s easier, usually, but I swear Fine Cooking’s scratch recipe is just as good! Ali Stafford (alexandracoooks.com) posted them a few years ago on her blog, and I’ve been making them (with a little more time) ever since! https://alexandracooks.com/2016/02/13/my-favorite-brownies/

Still, though, I’ll be buying the Pillsbury ones to try soon! :) Another fun post, as always, CoJ!

YES! THIS!!I agree. The recipe Ali Stafford posted is now my go-to forever. The first recipe I ever found that was as good as the boxed mixes!

My go to is Ghiradelli but I randomly got a box from the brand Kodiak Cakes when it was on sale at Target- it has higher protein and I think made from whole grains. I didn’t have high expectations and thought they’d taste too “healthy” but they were actually pretty good – more cakey than fudgey. I don’t know how the nutrition ultimately compares and I should probably just go for the regular boxes, but it made me feel less guilty when I ate almost half in one sitting. :)

They are really good! I was happily surprised. And super filling. I buy their dark chocolate waffles when they are on sale.

Annie’s Organic brownie mix is HANDS DOWN the best brownie mix. I’m sad that it wasn’t in this taste test. My family can’t tell if they are homemade or not. And, no nasty chemicals either.

Funny, I like boxed best too. I think I usually buy Duncan Hines cause it’s so easy to see (red) but will definitely get the Pillsbury next time. I like less cakey ones too. Non-pro tip: Add your own homemade vanilla, which I make by putting vanilla beans in rum or bourbon (not vodka).