We Did a Taste Test: Jarred Pasta Sauce 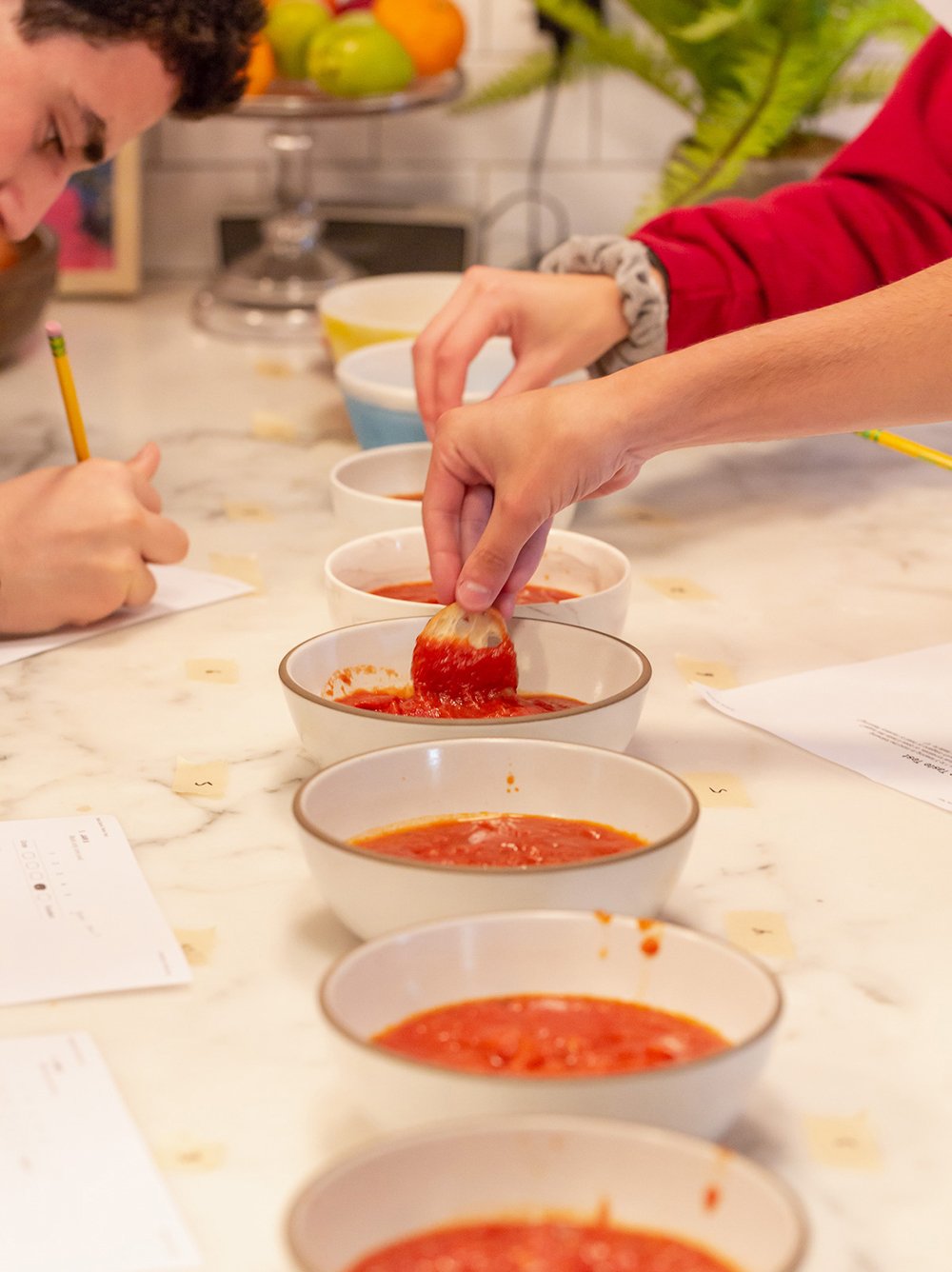 I grew up with a working mom who was not afraid to take shortcuts at dinnertime — there were meals built around Campbell’s soup and Kraft Mac and Cheese, and to this day, a bite of Stouffer’s Chicken Pot Pie is a turbo portal to my childhood mustard-colored linoleum kitchen. The one thing she never cheated on, though, was pasta sauce… 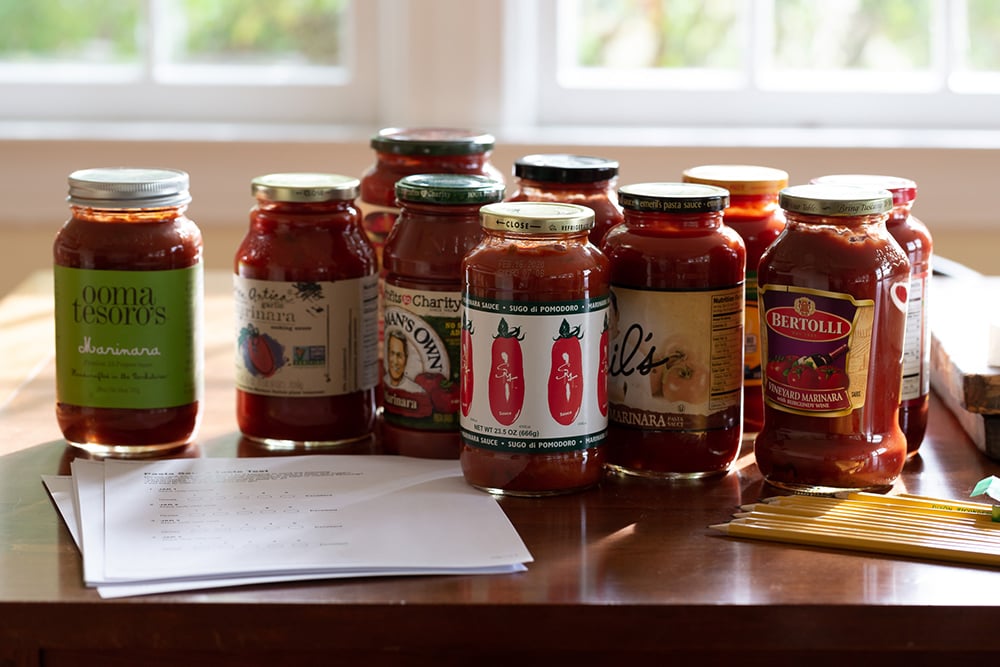 It was never from a jar, always from scratch. This could be because my mom is 100% Italian; it could be that this was the eighties and the options for good-quality jarred pasta sauce were few and far between. It could also be that she was never in charge of hosting 35 cross-country high school students for a Friday night pasta party. 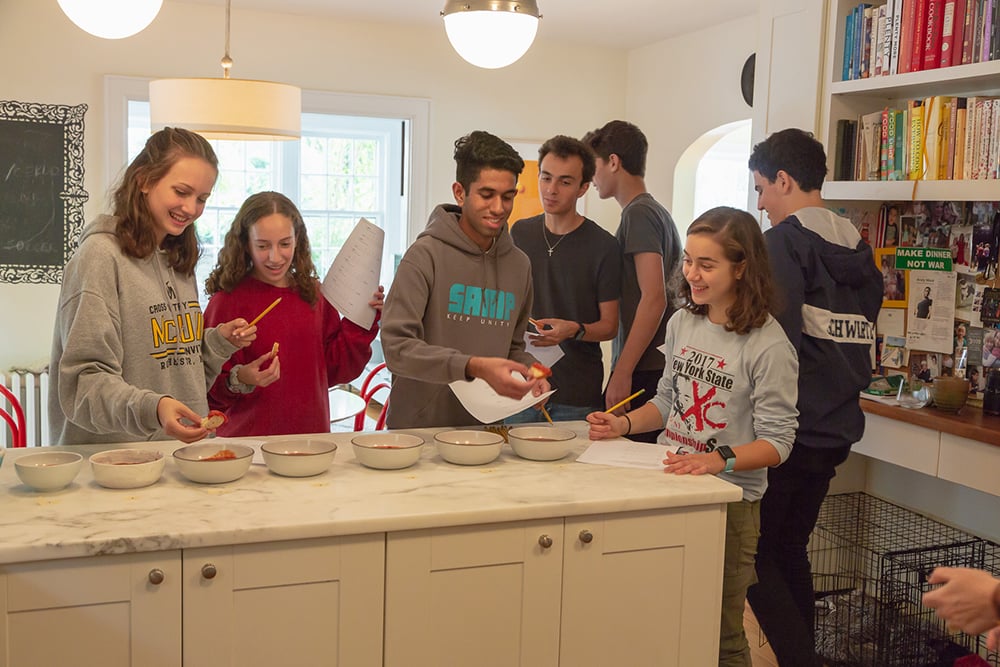 Let me be clear that I love my 16-year-old Phoebe’s cross-country team, and I love this ritual, which happens on the nights before big meets, and serves to load the runners with as many carbs as their sinewy, 30-mile-a-week bodies can handle. The menu is always the same: Caesar salad, garlic bread, brownies (“They must be from the box, Mom!”), and tons and tons of spaghetti with marinara sauce. In theory, I guess I could spend a few hours cooking up a cauldron of my mom’s sauce, but 35 kids (half of them boys) is a lot of kids and also: Why? When there are so many fresh, flavorful jarred options on the supermarket shelves these days?

The question is: Which one of those jars is the best?

I decided to hold a taste test to find out, and I invited my family (Phoebe, her sister, Abby, and my husband, Andy) as well as some of Phoebe’s teammates (aka the real experts) to partake in the proceedings. 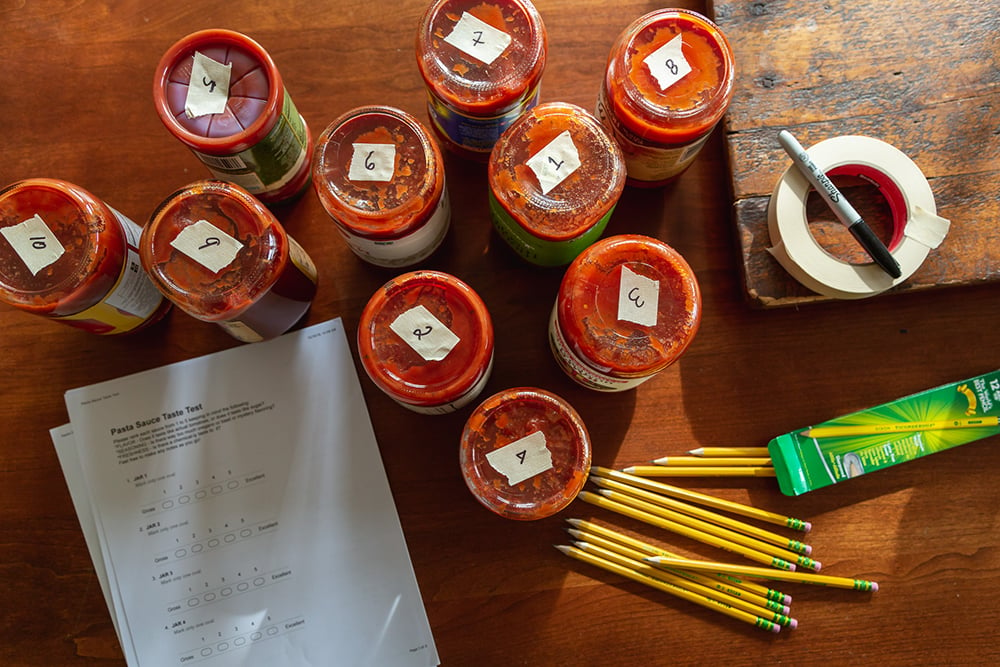 But first, the methodology. I could not include every jarred sauce that exists, but I tried to offer a selection of brands that were widely available and that hit a range of price points. To keep things apples to apples (uh, tomatoes to tomatoes), I stuck to the simplest marinaras I could find. In total, we ended up tasting ten brands: Trader Joe’s, Bertolli, Emeril’s, Ragu, Whole Foods 365, Rao’s Homemade, Newman’s Own, San Marzano, Ooma Tesoro’s, and Cucina Antica. 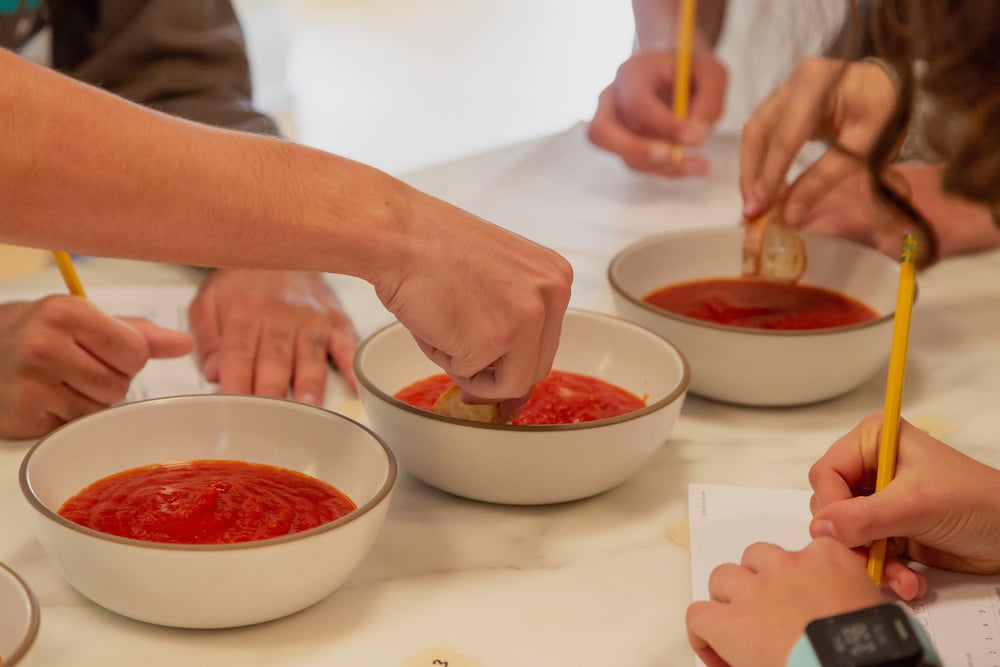 Bowls of sauce were individually numbered — only I knew which number corresponded to which brand — and everyone used baguette slices to scoop their tastes. No double dipping, kids! 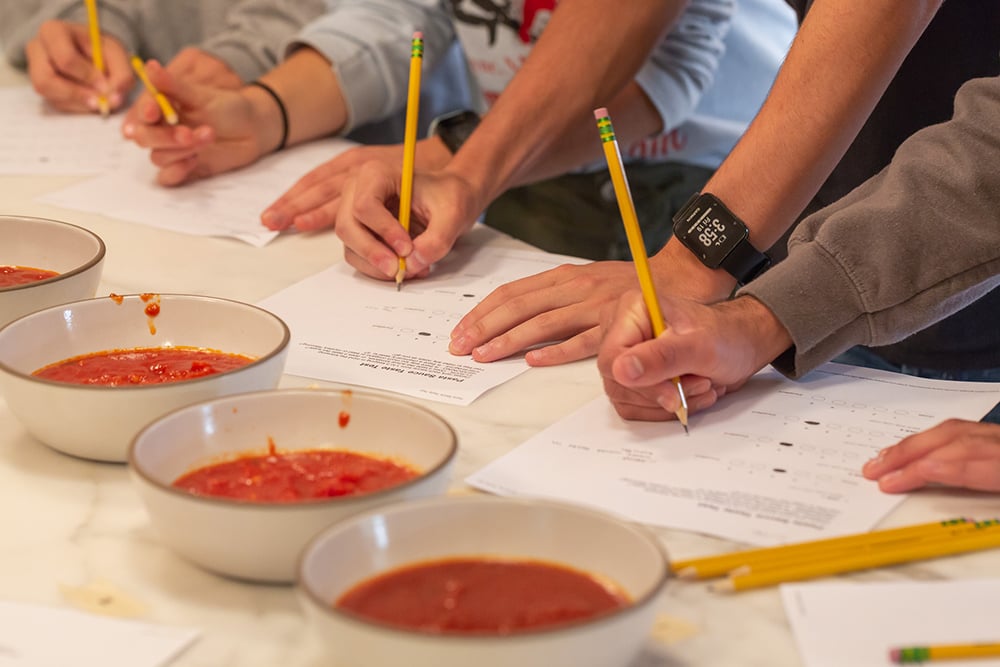 I created a review sheet on Google Forms and had my tasters grade the sauce on a scale from 1 (gross) to 5 (excellent). If there’s anything a high school junior knows how to do well, it’s filling out ovals with Number 2 pencils. 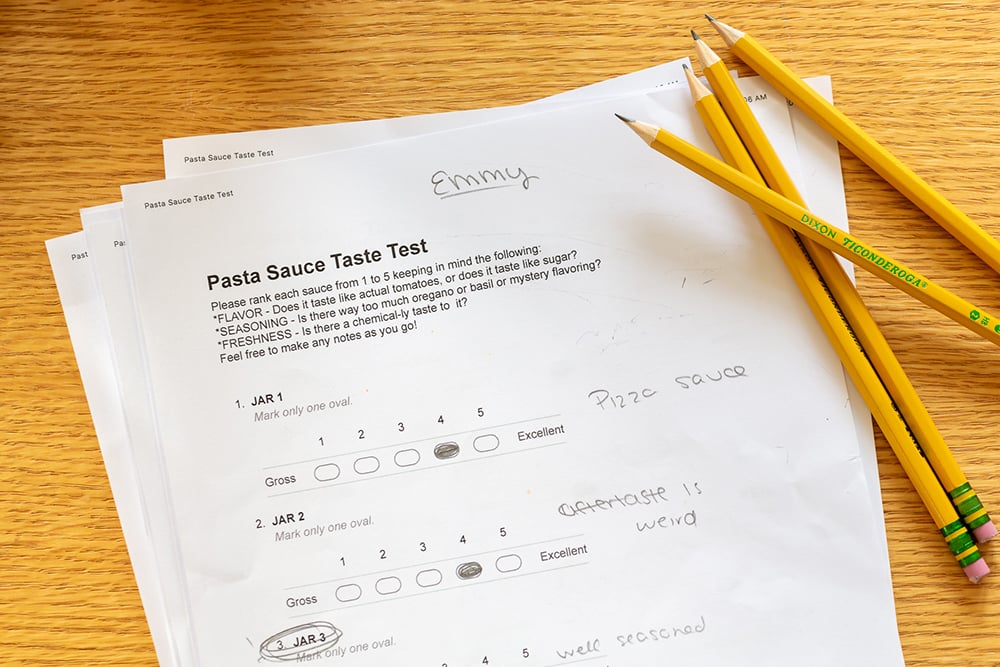 I told them they were welcome to write notes as they judged, reminding them that taste is personal and, unlike the ACTs, there are no wrong answers. 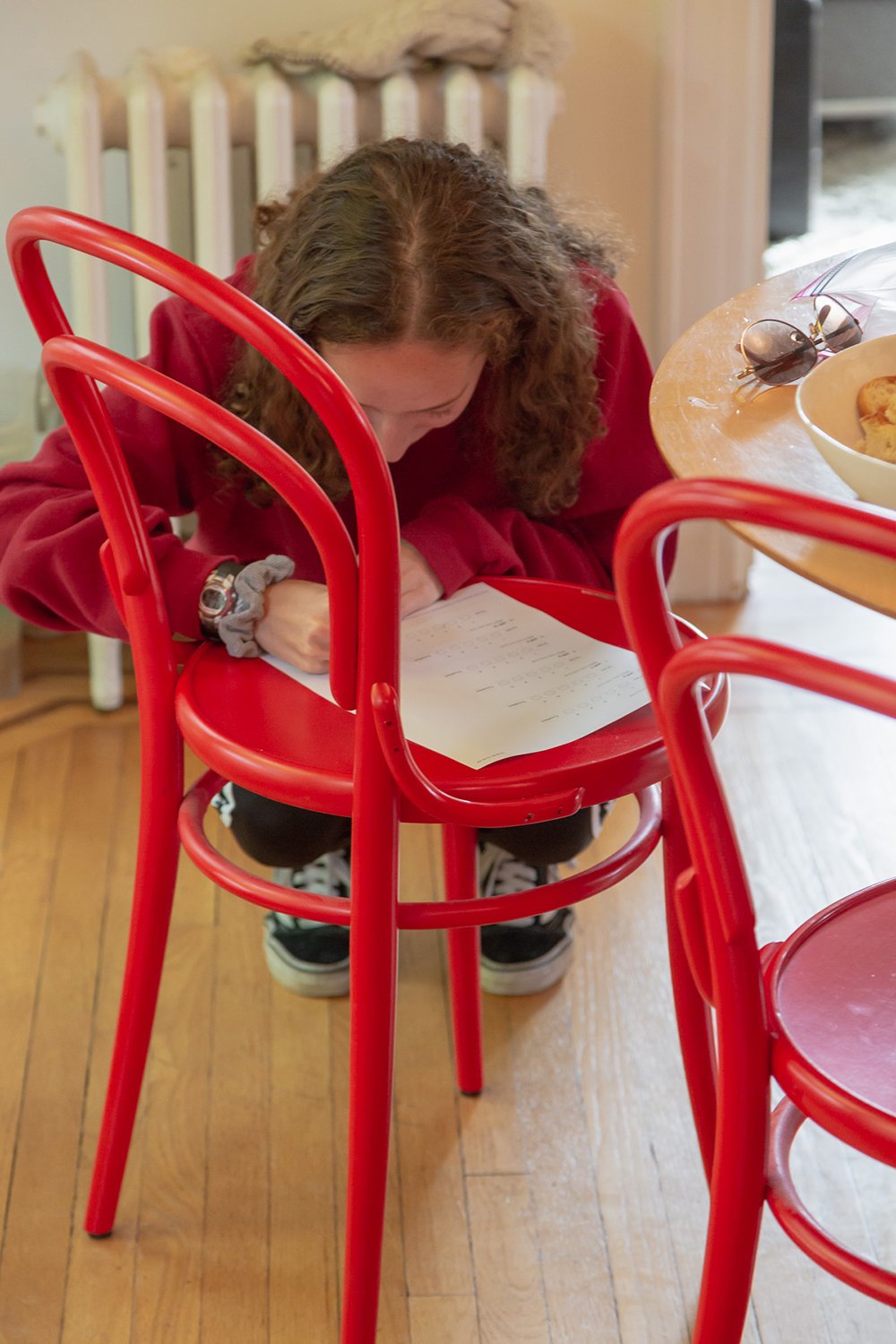 They took their assignment very seriously. 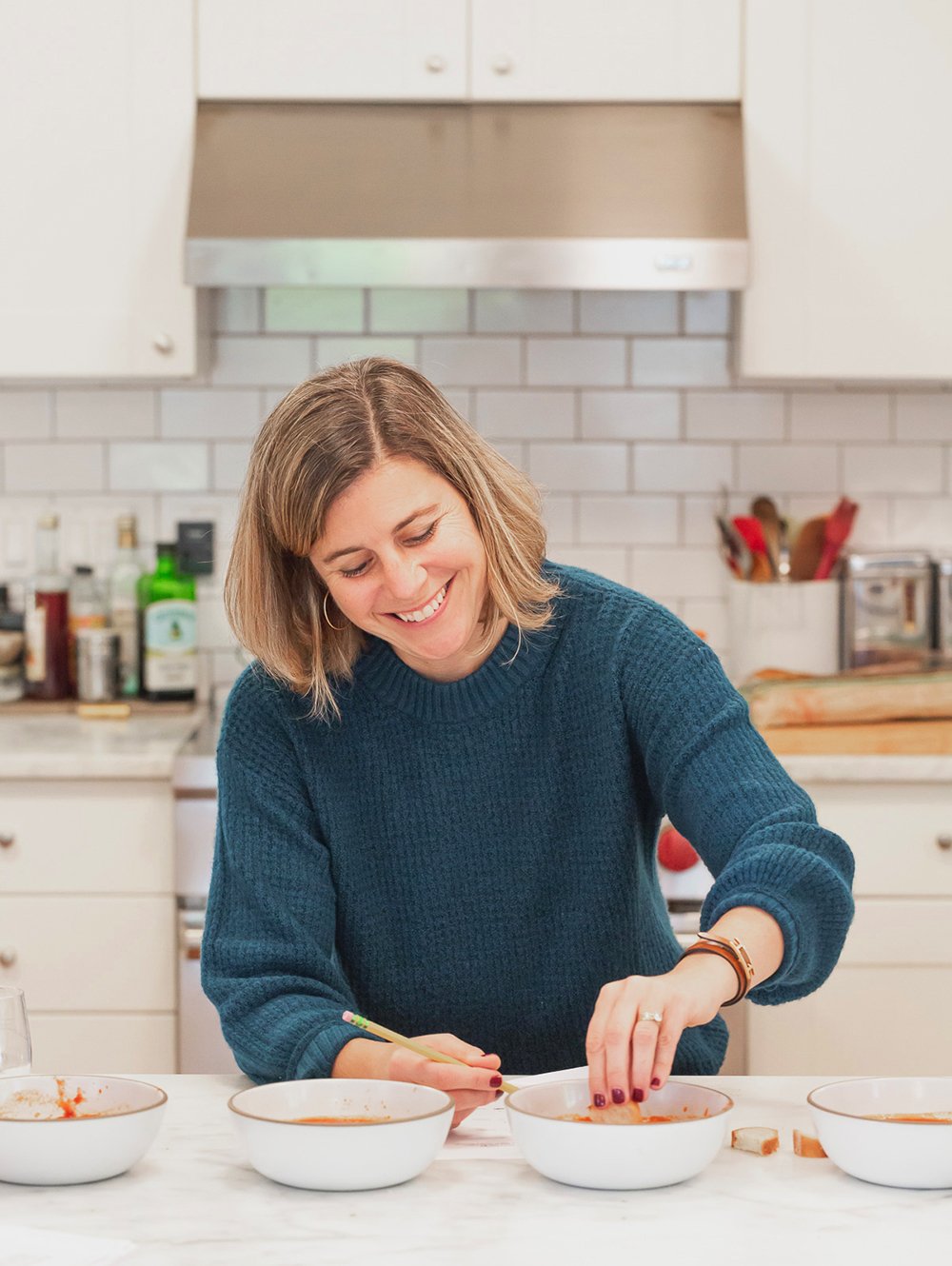 It’s not that I don’t trust you, teenagers, but I wanted to make sure the granddaughter of Mary Camino Catrino (me) and the great grandson of Vitina Turano (Andy) had a similar take on the situation. I switched the bowls around and taped the sauce I.D. on the bottom of each to make it a legitimately blind taste test for us, too. 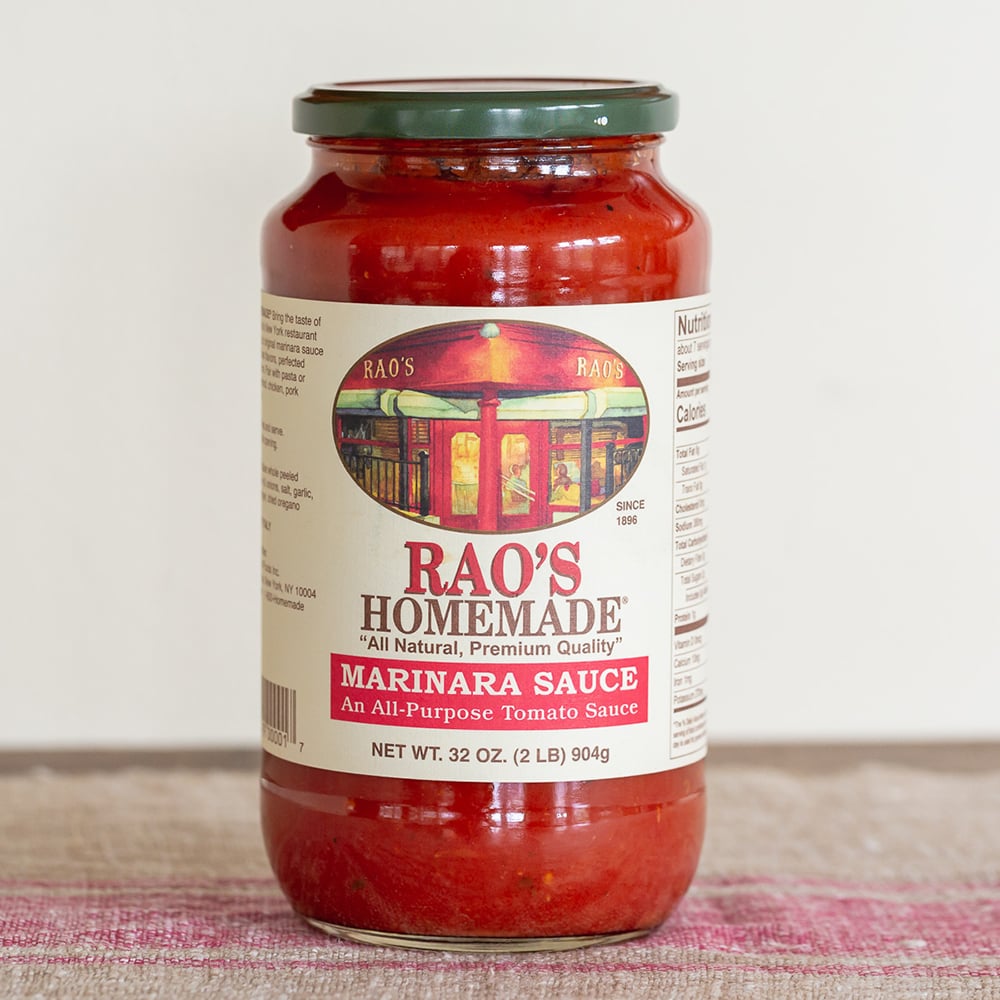 I’ve done at least three pasta sauce taste tests in my nearly two decades as a food writer and editor, and Rao’s has won all three of them, as decisively as a marathoner breaking the tape. It was my favorite, it was Andy’s and my daughters’ favorite, and it garnered the highest score from my junior testing team (4.5 out of 5). Rao’s, with its vibrant orange-red hue, wins you over almost before you even taste it. The flavors are fresh and distinct. and the hint of basil and oregano do just enough to enhance rather than overwhelm. “Oregano-homey flavor,” wrote Phoebe; “well-seasoned,” noted reviewer Emmy. And perhaps the highest praise: “Reminds me of pasta and meatballs,” said Matt. Perhaps not surprisingly, it also ranks among the most expensive, averaging $9 for a 25-ounce jar. (Note: Prices vary from store to store and, as always, you can get better deals on all of these when you buy in bulk online.) 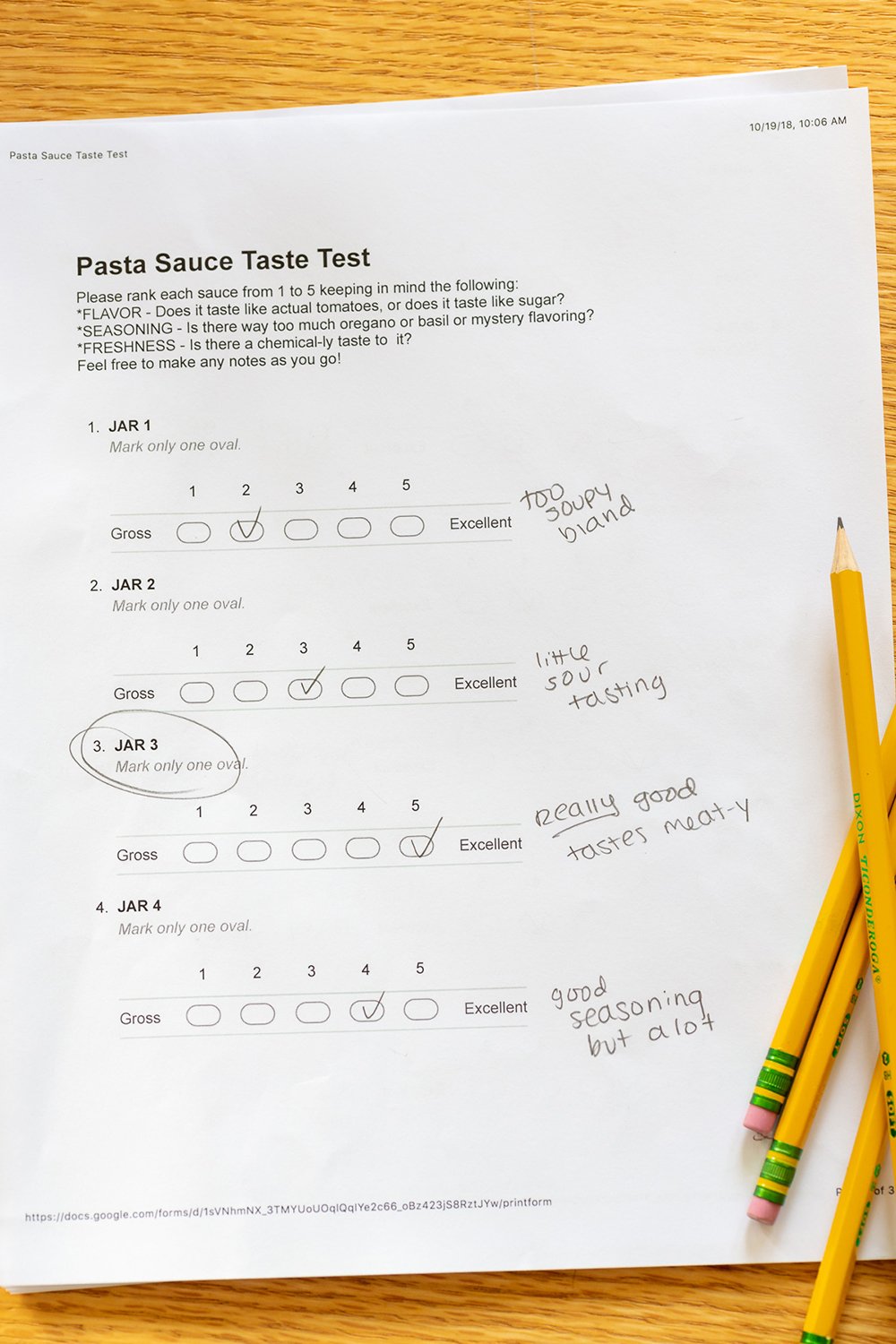 Of course, the kids saved the best comments for the worst sauces. “Tastes like bad licorice,” one wrote about Newman’s Own, which I presume was heavy-handed on the fennel. “Tastes like how hand sanitizer smells,” another said about San Marzano. Emeril’s got the dreaded ketchup comparison a few times, as well as a straight-up “Just isn’t good.” 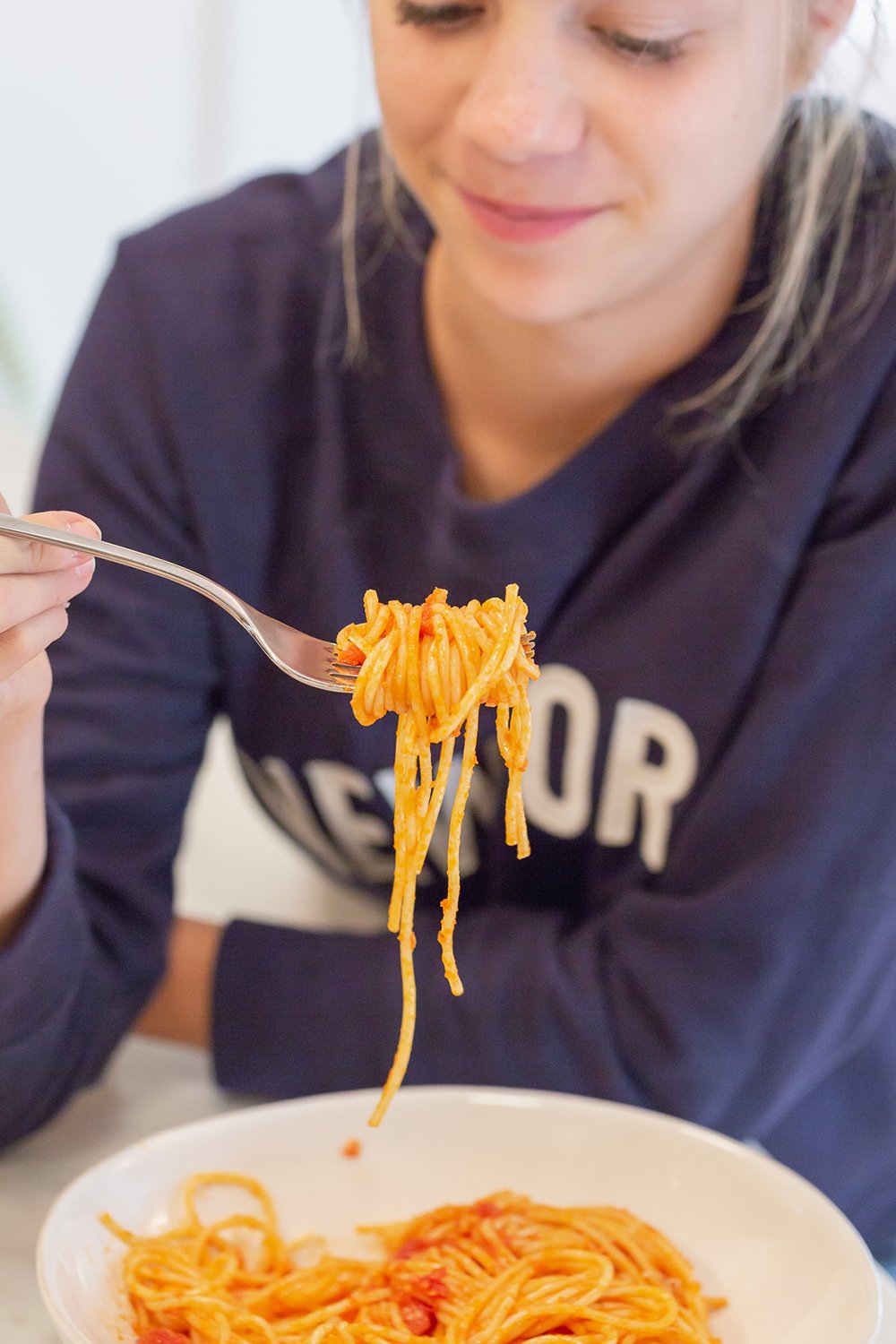 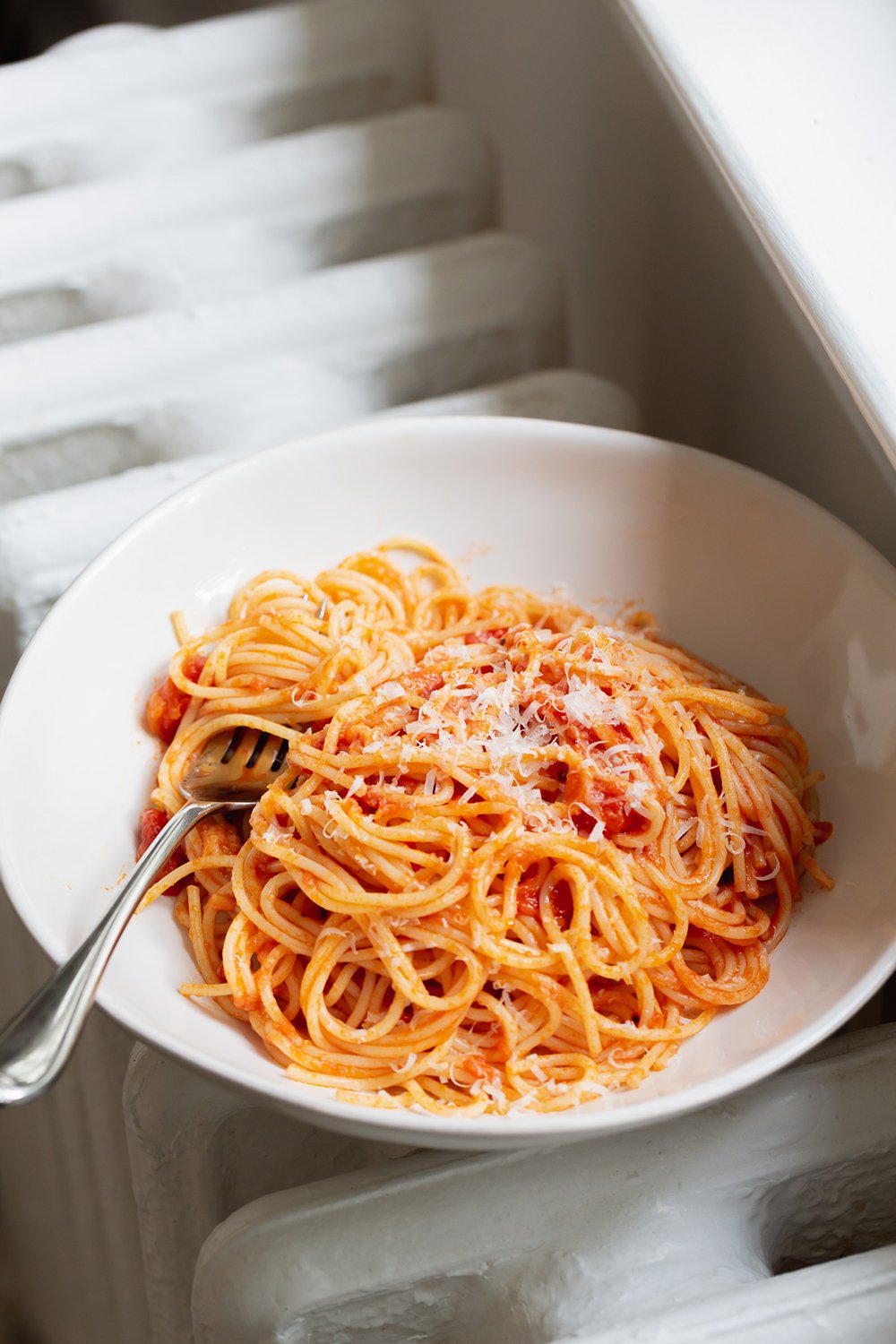 Rao’s also distributes beautifully on spaghetti, especially when you toss the spaghetti with a pat of butter first. (Pro tip: No matter what sauce you are using, butter helps the sauce stick to the pasta better.) 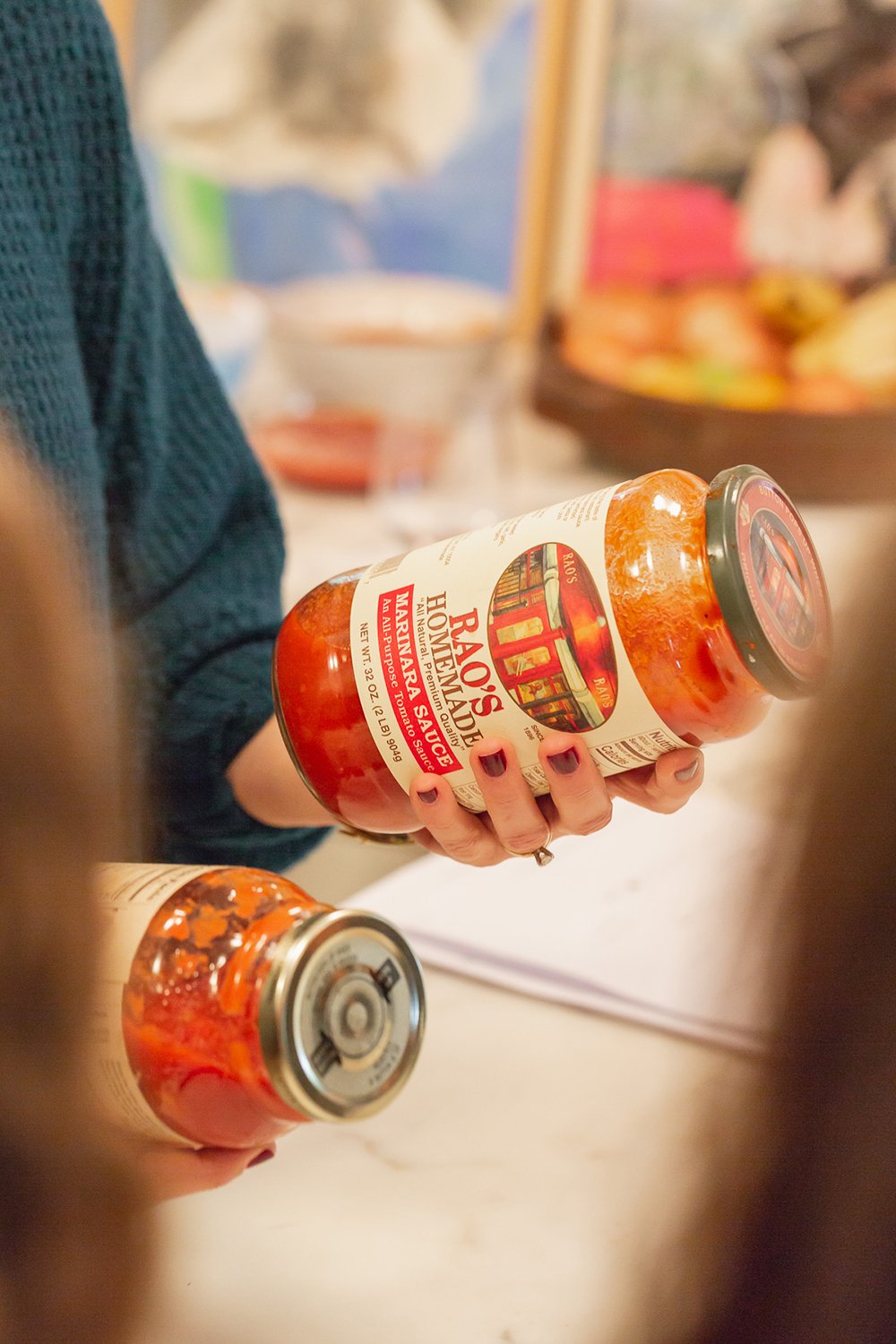 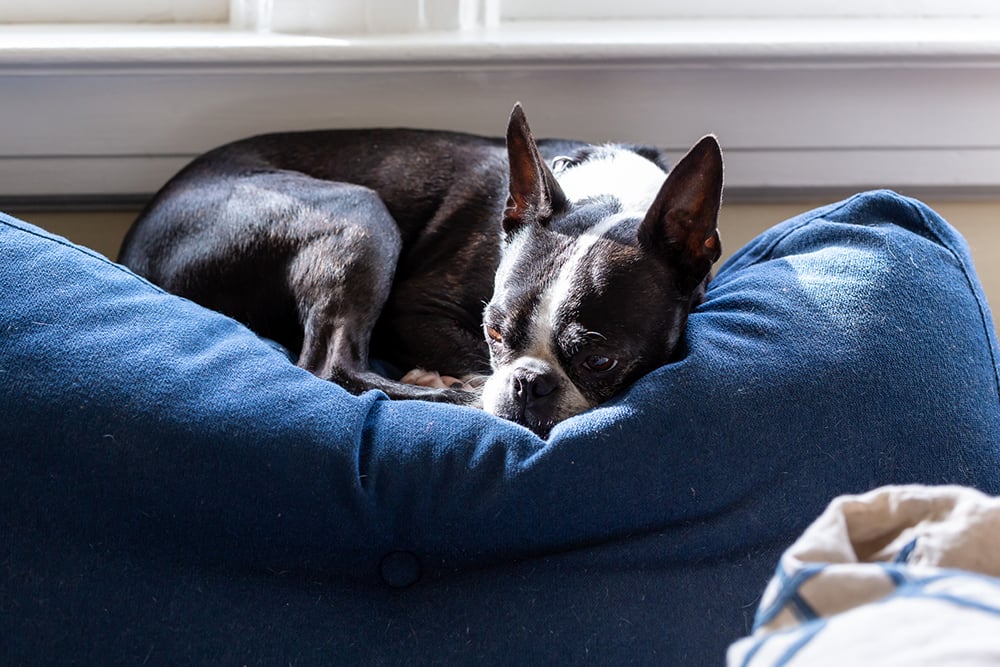 After we declared the winner, I read a few of the ingredient lists out loud, noting that all our favorites began with “Italian Whole Peeled Tomatoes” (not Tomato Puree) and contained nothing artificial or un-pronounceable. When I was done, one of them said, “Look at us being all smart.”

And before I could even say thank you, they all ran out the door.

What’s your favorite jarred marinara? And what other products should be tested by my distinguished panel?