“Help! My Daughter Won’t Sleep in Her Bed” 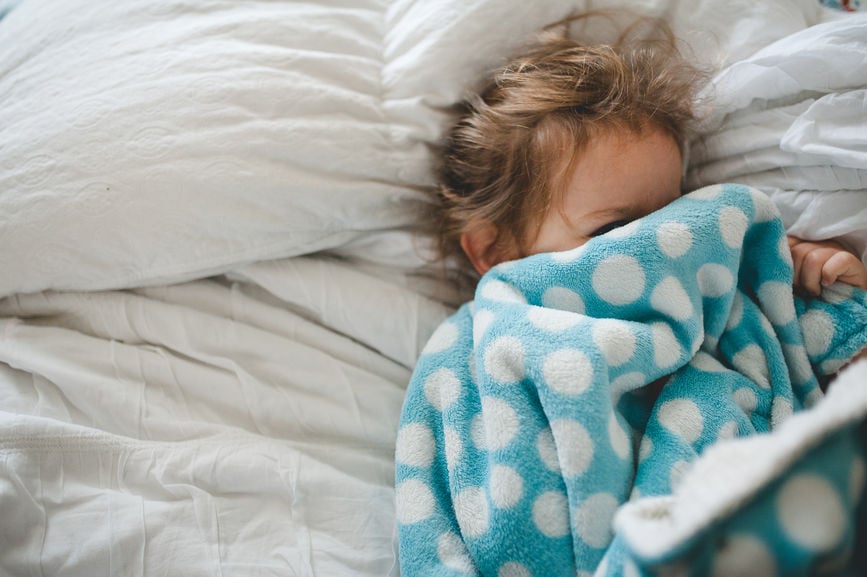 We had a problem…

My three-and-a-half year old, Hazel, wears sundresses in the winter, and ski boots in the summer. Instead of puzzles, we do nail polish. Instead of legos, she wants to freeze-dance. When she was a baby, she napped in restaurant nooks and on bookstore shag rugs, but never, ever, in a crib.

Suffice it to say: I am not a mother who ever got bedtime right.

I had Hazel on my own, as a single parent, so I assumed we’d be in survival mode for a few years. My expectations for structure and order were not high, nor were they all that important to me. She slept with me until I met my boyfriend, Sam, when she was six months old. When we became a family (insert heart emoji), I managed to get her to sleep in her crib and everyone felt like superheroes.

Then it all fell apart when she moved to a big-girl bed a year ago, at two-and-a-half years old.

That’s typically a tough transition for most kids, but other parents I knew seemed to buy books and talk to friends about how to handle it. Not us. We just put her in our bed. We figured that “life would work itself out.”

But 365 sleep-deprived nights later, life had not worked itself out.

Bedtime had become a really, really bad scene. I know families who happily and purposefully co-sleep, and that’s wonderful, but that was not our situation. It took two-and-a-half hours of books and lullabies and back tickles and cuddles to get Hazel to sleep (this was in our bed, no less), which put me, in particular, in the worst mood ever. We couldn’t “sneak out” until she was deep sleeping, as she’d wake at the slightest motion, heaven forbid we sneezed or smuggled in an iPhone to send work emails. The situation made it impossible to get work done, which was stressful for two freelancers who needed to make a living. It made it impossible for us to relax or unwind together. And it made it impossible to be intimate in any way. We’d try to move her in the middle of the night but she’d always wake up and freak out. We tried to orchestrate a sleepover with her cousin, as long as they stayed in Hazel’s bed, and I wound up taking my niece home even before lights off. We tried the old “be-right-back” trick. Nothing worked. While Hazel slept like a rock from 10:30 p.m. to 7:30 a.m., neither adult slept well with only two inches of personal space. The situation was dire. How did we get to this point?

So, I did something drastic: I decided to hire a sleep trainer. I also decided to write about it, so I’d be held accountable and actually follow directions. If you’re not sure what a sleep trainer is, their job is to take careful inventory of your entire bedtime situation, then create a plan for you to get things on track. The good ones have almost 100% success rates.

Andi Metzler and I hit it off immediately. It felt liberating to vent to someone who understood — and who had the tools to truly help. Her whole thing is: it works if you work, so I vowed to suppress my rebellious streak and step it up.

This was her general strategy:

Step 1: Prepare Her A week ahead of time, Andi had me psych up Hazel about sleeping in her own bed. This build-up included short Skypes with “Andi the Sleep Lady” who became a big, exciting name in our house. As our start night neared, Andi sent Hazel FaceTime videos of encouragement and a Daniel Tiger (her favorite!) book about bedtime. Also, we took Hazel shopping for comfy pajamas and got her room into extra-cozy shape.

Step 2: Prepare Her Bedroom. Andi sent us cute lists to help track Hazel’s new bedtime routine. Bath, brush teeth, pajamas, etc. — they each get a sticker when completed. We taped those up in her room, and I let Hazel buy stickers at her all-time favorite store, CVS.

Step 3: Survive the First Night. Night One was a Saturday. The plan was to get Hazel in her room, go through her sticker routine, and then some way, somehow, get her into her own bed. That was my only goal: Get her in that damn bed and keep her there, even with her eyes open all night. As predicted, she had the biggest tantrum of her life. When she finally calmed down, I asked her what I could do to make her less upset and we agreed to keep all the lights on her room — a big Andi no-no, but you do what you have to do. I stayed in her room, sitting on a chair next to the bed, until she was fast asleep about an hour later, then I tip-toed out. She woke up once in the middle of the night, and I sat in the chair until she fell back asleep, and then about an hour later, I tip-toed out.

Truthfully, it wasn’t as hard as I thought it would be. As I prepared Hazel for the sleep training, I also prepared myself. Was I stocked up on chocolate to comfort myself while my daughter shouted bloody murder? Yes. Did I need it? No. It was more like doing your taxes or going to the dentist… the kind of “adulting” you gotta do, and deal with. And it made me feel SO accomplished. That sense of responsibility has lifted me up in many other ways. I managed to sign Hazel up for a summer camp early, so I could get the early-bird special (what?!); I cleaned out her closet and my invoices; I made an onion and kale quiche — and gourmet overnight oats, for goodness sake.

It also made Hazel feel very good about herself. The mornings-after were not filled with guilt or trauma, rather glee and pride. We told everyone who would listen that she slept in her own bed and Hazel even asked to call “Andi the sleep lady” a few times to, well, brag! It took the full nine days — days and nights in which sleep training was my only priority — and the sacrifice has paid off indefinitely. We have a kid who’s a good sleeper (crazy), and we are now enjoying trying to make her a sibling — wink! Getting sleep under control has made life with my daughter, my sweetest dream, even sweeter.

How do you sleep as a family? Co-sleep? In separate rooms? Any aspects you’re struggling with? Any sleep approaches that have worked for you? xoxoxo

P.S. A family of five that chooses to co-sleep, and how we taught Toby to sleep as a baby. Plus, my biggest motherhood mantra.

393 COMMENTS
By Joanna Goddard
Motherhood
Three Words That Changed How I Parent
September 21, 2020

511 COMMENTS
By Joanna Goddard
Motherhood
Moms, Are You in the Photos?
October 1, 2018