8 Women on Choosing Not to Have Kids 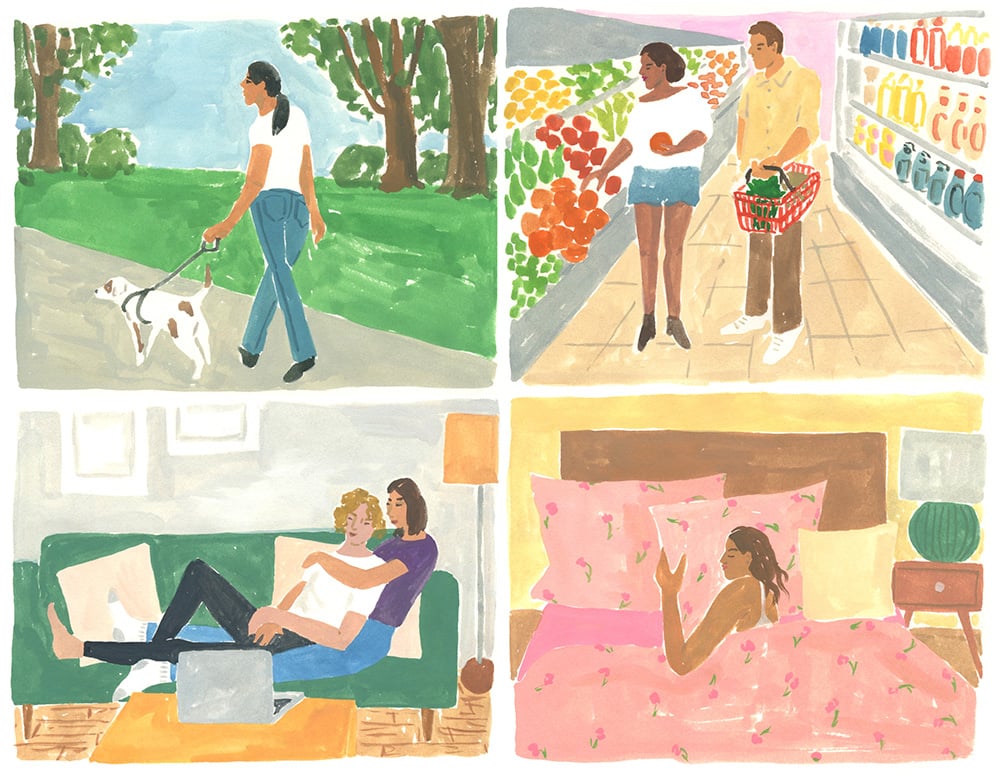 We talk a lot about the many shapes families take. So, what about those of us who choose not to parent? Here, we spoke to eight women about how and why they decided to remain child-free…

Lauren, 34
When I was in high school, the thought of having children always felt like part of some abstract future plan. I thought about it the same way I did marriage and career, assuming I’d feel the desire for children someday. It’d just happen. Eventually.

Fast forward to my late twenties, and suddenly the pressure was unwavering. The second I got engaged, the baby talk started, mostly from older family members. The more questions I got, the more I started to worry. Why wasn’t I yearning for a baby? I’d had friends cry in my arms about their fertility struggles, and while my heart ached for them, I couldn’t imagine what that felt like to want something with every fiber of your being. I felt like I was somehow broken.

As I’d done with any major life decision, I started researching the hell out of it, devouring books and papers on parenthood. I learned I wasn’t alone in my uncertainty, and it gave me immense relief to realize there were other women choosing to remain childfree.

There are plenty of valid reasons to not have kids, but what it came down to for me was how I felt in my heart. Do I feel guilty that my parents will never have grandchildren? Of course. Do I look at the sweet faces of children and wonder what mine would look like? All the time. Did I grieve for the ‘what if?’ — the loss of that theoretical other life? Absolutely. But I came to realize that for me, these aren’t reasons to bring a child into this world. I can’t make serious life decisions to fulfill the wishes of my family or to satisfy my curiosity. I have to live authentically, even if it means going against the norm.

Dana, 33
My boyfriend and I had been dating for about a year. The topic of kids had come up occasionally, but only in vague ways. Then we went out to a fancy dinner on New Year’s Eve. He gazed at me over the romantic candlelight and said, ‘So, I’ve been thinking…’ He paused. ‘Would it be okay if I don’t want to have kids?’ (Sweet timing, honey! I had to laugh.) Fortunately, we were on the same page. We recently got married and have no plans to have children. We have a pinball machine instead.

Wudan, 28
Growing up, it was never a question of if I would have children, but when. My mother, who’s a Chinese immigrant here in the U.S., always asked, sometimes aggressively, ‘When am I going to have grandchildren?’

I got to a point where I realized that having kids would throw my career for a curve. I’m a journalist who travels all the time, and I truly love my job. I know having kids requires so much energy, and that would take away from the energy I put into my work. Then recently, I did a story about a movement of people who are voluntarily choosing not to have children for the sake of the planet. Doing that piece got me to consider the effects of overpopulation and the beneficial impact of not having children. That’s when I made the decision.

Maria, 30
It’s funny, people often want me to have very concrete reasons for not having kids. But from a young age, I just had a lack of interest in motherhood — even in dolls or any kind of nurturing play. I was always open about it with my parents, and I’m lucky that they never put pressure on me.

By the time I was 20, I decided to pursue tubal ligation. I was on birth control at the time, and it was annoying to take a pill every day. And I knew I wasn’t going to have kids — I was very, very sure about it. It just seemed like the logical thing to do.

But, of course, I ran into a lot of people who felt very differently — and that was a bit of a shock. I had to go to five doctors in the end, before I was able to have the procedure. They would ask me, ‘How do you think your future husband will feel about this?’ That was incredibly patronizing, of course, but I would just say, ‘Well, I wouldn’t marry someone who wanted children.’ Again, it helped that my parents were great throughout the process — my mom, in particular. She’d been a single parent before marrying my stepdad; she understood the reality of raising a kid. She told me she’d support whatever decision I made.

When people ask me questions, it’s usually out of curiosity and not hostility. I live in Indiana, and the midwest is one of the friendliest places I’ve ever lived. I just smile and say, ‘Oh, I’m child-free. My husband and I don’t want children.’ Most of the time, people don’t press.

Charlotte, 33
I never wanted children. I haven’t ever related to the identity of a parent. My politics are also leftist and queer — and though many disagree, I see that as incompatible with performing unpaid reproductive labor.

Then I was diagnosed with breast cancer at 31. I had only a small window to preserve my eggs before starting chemotherapy, but my priority was to save my own life rather than potentially saving my fertility — especially knowing that if I did bring a child into the world, there was a real possibility I might leave him or her without a parent at a young age. There were other reasons, too — like the fact that my cancer is genetic. I also live in an expensive city in order to access top medical care, and I can’t imagine a world where I could pay for rent, treatment and the expenses associated with raising a child. Luckily, my parents, sister and close friends have been really understanding.

Kristen, 44
Before I got married at 20, my husband and I didn’t talk about whether we’d have kids. Still, I never thought it would be an issue. I thought it was always the wife who wanted kids and the husband just went along with it. But soon it became clear that my husband wanted a child. I had such an overwhelming — almost physical — negative reaction that I knew motherhood wasn’t for me. We had other issues, but this was an irreconcilable difference and we eventually got divorced over it.

So, with my second husband, I made sure to tell and re-tell him that I didn’t want children, before we got married. He assured me he was fine with it. But three years in, he admitted he’d always expected me to ‘come around’ to having kids and had assumed I was in a ‘phase.’ Again: irreconcilable differences.

Now, I’m happily married to someone who’s truly on the same page. I honestly don’t mind when people ask questions. I fully understand their curiosity — even I’m curious about why other people choose not to have kids. I’m actually more curious about the decision people make to have them. A child affects energy, finances, work life, romantic life, free time, stress levels. Isn’t that a much more interesting choice to make?

When people do express judgment, I try to be compassionate. And I know if someone is angry at me for not having kids, it’s probably because they’ve felt pressured themselves. We’re constantly bombarded by messaging from media, peers and family, saying, ‘Everyone does it! You’ll figure it out!’ What I’d like to see is more openness to answering questions about reproductive decisions on both sides. I think it could help shift the narrative that everyone should have children.

Debbie
I don’t have a clean or neat answer, but I think it comes down to sovereignty over myself, my body, my mind and my life choices. I am a first generation Taiwanese immigrant. When I was seven, my dad borrowed money from the wrong people. To be safe, he sent my mom, and four-year-old sister and me to California to live with my maternal grandparents, my uncle, and his wife. All seven of us lived in one house, like many Asian families do, and even as a young child I knew very little was mine and mine alone. The financial hardships my mom endured first as an immigrant and then an overstayed illegal immigrant made it extremely difficult for us to save money. We lived paycheck to paycheck and in constant fear of ICE and deportation.

As a kid, I never subscribed to the traditional family model with a mom, dad, 2.5 kids, and a dog. That wasn’t my family, for sure, and I saw children as financial burdens. I was acutely aware of the sacrifices my mom made for us and it broke (and continues to break) my heart. I told myself I would never let myself live like that as an adult. I am going to be self sufficient and my choices will be mine; and my life would never be just mine if I become a mother. I’ve made my peace with it even if many people don’t understand it.

Tracey, 35
I have always known in my heart that I am not called to be a mother. Over time, I came to see that I am meant to be an aunty. I myself have an amazing aunty who, along with my parents, helped shape me into who I am. When I was eight and we moved from a farm to the city, she was the one to soothe me. She gave me bath beads as a gift. Our old home didn’t have a bath, so this city bath was something special, because she made it so. She did the same with training bras. When I was 13, she replaced my mortifying beige one with a jazzy fluorescent number. She modeled the most important lesson about being in a child’s life: just show up.

Now it’s my turn, and I have 14 children who call me ‘aunty’ (I am the biological aunt to just two of them). If you’re a kid in my orbit and I love you, I’m yours, for life. Recently, my friend’s five-year-old did a school project where he traced his hand and then, for each finger, he drew a face and labeled it with the name of someone who is a ‘safe person’ — someone he can trust and go to in tricky situations. I am extremely honored to report to the world that ‘Aunty Tracey’ was awarded the prestigious appointment of Thumb!

It hasn’t always been easy to be the outlier as a non-mum. It was a hard slog sometimes, wanting something different from my peers. But as these kids grow up, telling me their hopes and dreams in a way they don’t always with their own parents, I am more sure than ever that this is my calling. This isn’t second prize, it’s an alternate first.

Thank you so much to those who generously shared their stories! Would you like to have kids? Or not? Or are you on the fence? We’d love to hear your thoughts…

P.S. Five CoJ readers share why they chose not to have kids, and my friend Corrie on being completely ambivalent.

(Illustration by Leah Goren for Cup of Jo. A few names have been changed to protect privacy.)