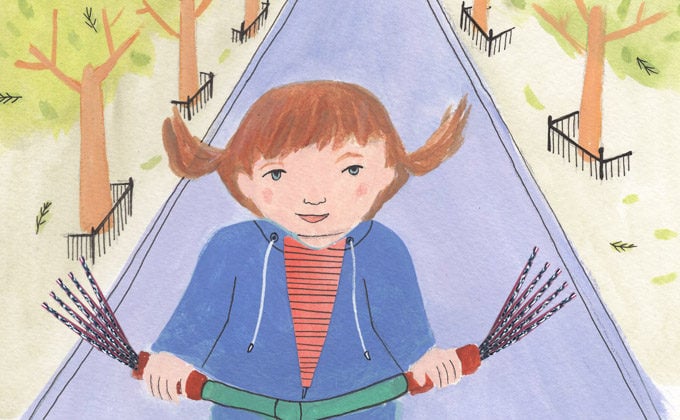 Our series of personal essays by contributing writers is currently focusing on a theme that everyone can relate to: parents. Here is Lisa Rubisch, whose mom taught her an indelible mantra…

When I was three, I rode a lime green tricycle, chopper-style, with a double step in the back and sparkly fringe on its handles. I pedaled exuberantly past the row houses in our Philadelphia neighborhood; the sun in my eyes, the wind in my mouth, my mother, pregnant with my sister, skipping strides to keep up. The sidewalks were like Jack-o’-lantern teeth, crooked and uneven. Whenever I came to a bump, I would slow down and cry, “Mommy, I can’t!”

Ordinarily, my mother would give me a boost up and over, but this one day, she said, “Can’t means won’t.”

At the time, her words were incomprehensible. Just help me already!

We went around and around until I grew so frustrated, I pushed my foot against the pedal as hard as I could… and made it over the crack.

Nothing is more infuriating than being told Can’t Means Won’t by your mother, head cocked, hand on hip, damp dishtowel on her shoulder perfumed with Lemon Joy. But nothing lights a better fire under you. Can’t Means Won’t was a dare, a battle cry, a provocation that said don’t underestimate yourself. If you want to do something badly enough, you’ll do it.

As I grew older, I took it to mean other, more nuanced things. Don’t play it safe. Don’t follow every rule. When someone tells you, “You can’t,” you roll up your sleeves and prove them wrong.

From my high school guidance counselor: “Don’t run for student council, because as a new student here, you will never win.”

From my college career advisor: “You will never work in film because you didn’t do an internship.”

From a production assistant when I was interning at MTV: “You will never get hired here.”

From my first boss at MTV: “This idea sucks. Try reading some books on television theory.”

From my own mother: “You can’t move to New York City. You will never be able to support yourself there.”

Thank god I didn’t listen to them.

If it sounds easy, I can assure you it’s not. I work in the male-dominated industry of commercial directing and have had to put my foot down hard on the pedal and push forward with everything I’ve got. Even after two decades of directing (and forty-some years of life), there are times I feel invisible or daunted. There are days of despair. A project comes in and I’ll occasionally feel the weight of self doubt park itself squarely on my chest, making it difficult to breathe, let alone work. There is misogyny. There is subtle condescension. Frat boy humor. There are very conservative clients who take one look at me and don’t expect me to have an opinion. There are moments where the voice in my head says flatly: You can’t. And sometimes I find myself whispering back, OK, fine, so I won’t.

The other day, my ten year-old son, Beckett, came to me in a panic. He had forgotten his reading club book at school over the weekend and was now 50 pages behind everyone else and it was Level X and he’s only a V and the vocabulary was impossible and he hated the premise and he was dumb and he couldn’t do it.

I scooped him up in my lap. I wiped his tears. I opened the book and said, let’s read it together. I imagined him on the bike. I saw myself standing behind him in my mother’s shoes. I was about to utter the infamous words but then I stopped myself and reframed them for him. And maybe for myself as well.

P.S. A romantic trip gone awry, and how to talk to little girls.

Tags: themed essay series
70 COMMENTS
WRITE A COMMENT
Motherhood
most popular
01
How Did You Know You Were Ready to Have a Baby?
02
21 Completely Subjective Rules for Raising Teenage Boys
03
Best of: Parenting Around the World
04
Trying Out Slow Parenting
05
Three Transgender Kids Share Their Stories
May We Suggest…
By Joanna Goddard
Motherhood
Trying Out Slow Parenting
March 23, 2020

I group up with a similar phrase from my paternal grandmother whom I never met: “Can’t never could.”

Of course we can’t lift up 3000 pounds with our bare hands, but if they need lifting, there’s always another means ;). I also believe in God which makes it even ‘easier” to believe in your abilities when supported by the strongest in your path.

Oh those last two sentences got me. Yes we can and we will! –
Always!

this is one of the most amazing things i have ever read. how powerful. i am taking this to heart and using it!!

I have sent this link to my best mama friends this morning. What a sweet, inspiring read.

I love this! I’m a competitive gymnastics coach and I definitely want to start using this with my gymnasts. There’s another quote, similar to this that I really like: “Fight for your limitations and you get to keep them.”

My Grandpa hated it when we would say we would “try”. He said you don’t try to do something you either do it or you don’t.

Oh wow Lisa, this was absolutely wonderful. I wish I knew your mom! Then again, I know you and I know you are a wonderful and inspiring mom.
When I read the dish towel smelling of Lemon joy, I was there! Your words jumped off the screen at me. You have a “way with words” as they say.

My mom is so fierce and nothing deters her. Whenever I call her troubled about something or another she always says the same two things, “How much water have you had?” and asks me to repeat “I’m healthy, wealthy, and wise” until I believe it.

That is a great saying..wish my mom had thought of it. #millennialprincess ;)

I absolutely love this. What great advice for children who need to learn resilience and hard work…and what a great reminder for adults (especially women) who sometimes forget their inner strength and power.

Great essay! My mother always said to us growing up, “there’s no such thing as can’t.” Thinking back, it had a great effect on me. Hurray for supportive mums :)

Can’t means you won’t! I will take this into my life with utter belief :) thanks for this x

I say that to my babies now and it is a wonderful tradition to share.

Growing up in martial arts dojos, our teachers would always say to us “If you can’t, you must. If you must, you will.” It’s about prioritizing yourself, picking the things that challenge you, and not getting in the way of yourself.

My parents said/say this too! And as a mother of three (three and under) I can imagine how your exhausted pregnant mother was feeling and what was going through her mind when she decided that morning “Nope, you need to learn to do this for yourself!” ?

This is absolutely amazing and it gave me chills since my dad had a very similar mantra that I’ve appropriated in the same way as the author: “Can’t never will.” I suppose his frame emphasized the defeatist attitude more than the choice, but the lesson is the same. My dad died 14 years ago and on the eve of his funeral (on October 11, 2002), I thought it would be impossible for me to stand before those gathered and speak. But his words — can’t never will — gave me courage as it has my entire life.

My dad used to tell me, when I was being stubborn and hard-headed, “There’s an easy way to do this and there’s a hard way. Which one do you want?” It taught to me to calm myself down and have patience when I’m frustrated. But it also taught me that I can do hard things. Now, I don’t like to turn down a challenge. It will be hard – there’s an easier way, but I will grow through the experience.

This is beautiful, and so well written. I can se her mother, and I can see my own in a very similar way. How important these little lessons are for children to take and use as adults. My children are 2 and 8mo, I am absolutely implementing this mantra in our lives :)

I don’t remember my mom ever saying the words, but this sentiment was woven deeply into my upbringing. Self reliance and perseverance are core values in my family and it never occurred to me that there was anything I couldn’t do.

This is a sweet and thoughtful post. Thanks. I’ve adopted, “not I can’t, I can try” with my 5 and 2 year olds but I like the won’t as a challenge. My 5 year old now asks my 2 year old if he wants to be the kid who tries as the high standard of behaviour.

Dammit, you did it! You finally got me to tear up! Years of evading the cup of jo tears and it finally hit me. Well done, Lisa Rubisch.

Those are wise words :)