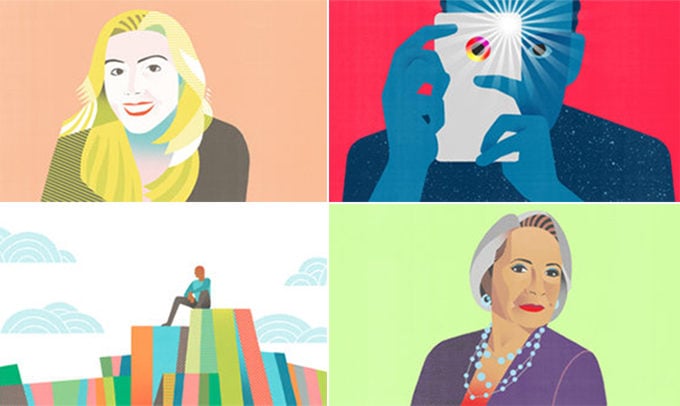 The other evening, I texted Stella from the bathtub, where I was listening to a podcast (as one does), and said, “I have an idea.” After telling her about my product idea, she sent back this gif and we cracked each other up with enthusiastic emojis for a full five minutes.

That is basically what has happened each time I’ve listened to How I Built This, a new NPR podcast Stella and I are now both addicted to. The show’s format is a riveting 30-minute conversation with an innovator who tells the story behind the biggest thing they’ve ever done. You can’t help being inspired to create parallels in your own head, like “Oh yeah, I could start…” or “I have an idea for…” or even “I can do anything!” (Even the show’s music somehow feels like it’s beating inside your chest.)

The series is hosted by Guy Raz, an NPR veteran with an impressively light touch — it’s as if his subjects are telling their story directly to you. So far, I’ve listened to Sara Blakely talk about how she came up with her billion-dollar idea (Spanx!) while selling fax machines door-to-door, and Kevin Systrom and Mike Krieger describe how they created (and almost destroyed) Instagram in a coffee shop, while living on PB&Js. Waiting for me is this week’s episode with Cathy Hughes, who practiced her DJ routine in the bathroom as a kid and later founded the largest African-American-owned broadcasting company, Radio One. So far, each story demonstrates that three of the main ingredients for creating something transformative are, simply, a good idea, hard work and a bit of luck. It’s incredibly motivating.

Have you listened to How I Built This? What are your go-to podcasts these days?

(Illustrations from How I Built This.)

Tags: podcasts
86 COMMENTS
WRITE A COMMENT
Design
most popular
01
My Sister’s Home Makeover
02
What Are Your Top Three Books?
03
The Ultimate TV Guide (If You’re Looking for Something Great)
04
Catherine Newman’s House Is a Joyful Jumble of Books, Games and Cats
05
Behind the Scenes: Making a Magazine Cover
Subscribe
Login
86 Comments
Inline Feedbacks
View all comments
kate

I started following the @thejealouscurator on instagram because i love the artwork she posts, which led me to her podcast. Wonderful, casual, friendly interviews with talented artists. Its inspired me to start painting.

I also love From Scratch by jessica harris, she interviews fascinating entrepreneurs. Sounds like How I Built This is right up my alley.

I’ve been meaning to check out How I Built This! A couple of standouts I haven’t seen many people mention (I’m a podcast junkie for sure):
– Codeswitch (conversations about race that I haven’t heard elsewhere on radio),
-More Perfect (from the folks at Radiolab- all about the backstory of the Supreme Court)
-The Run-Up (election related, by the NYT)
-Savage Lovecast (explicit conversation about sex, love, & politics by the one and only Dan Savage)
-99% Invisible (all about design in the world around us- shockingly fascinating, and Roman Mars has the sexiest voice on radio)
-2 Dope Queens- so, so funny

Nerdette!!! It is an amazing podcast an the hosts are incredible. They bring on all kinds of excellent guests to talk about “nerdy” things, from science to their favorite books and TV shows. Recently they’ve interviewed a lot of female authors. They also do a Game of Thrones recap series (with Peter Segal of Wait, Wait, Don’t Tell Me) while the show is in season. I LOVE it and recommend it to everyone.

If you are any interest in true crime, you MUST MUST MUST listen to My Favorite Murder. It is hosted by two awesome girls named Karen Kilgariff and Georgia Hardstark and they just, quite literally, talk about their favorite murders in each podcast. They are endearing and hilarious and make you feel like you are catching up with you best girl friend. I recommend starting at the beginning to get a feel for their pacing and humor. It sounds so messed up (murder!), but it is truly an amazing podcast. My friends and I cannot stop listening to it and we have been texting constantly about it.

I love How I Built This!

I have approximately zero interest in Spanx and the first interview with Sara Blakely was so much fun to listen to and very inspiring. All the other episodes have been great too.

I’m really into the Ezra Klein Show lately… I loved the interview with HRC and the one with Leana Wen was SO enlightening. http://www.stitcher.com/podcast/panoply/the-ezra-klein-show

Have you checked out Stuff Your Mom Forgot to Tell you?

I’m addicted to podcasts. Thanks for the suggestion. Favourite at the mo is The Moth, Oh Boy, Sportful, The Mash-Up Americans.

“The Broad Experience” by Ashley Milne-Tyte is about women in the workplace. It is awesome and inspiring (and sometimes depressing and frustrating, but in an smart way).

Loved the story of spanx you had shared last week :)

Definitely going to look into this one! I’m obsessed with the Happier podcast with Gretchen Rubin and her sister Elizabeth Craft. It’s basically about human nature and how to make yourselves happier while acknowledging all the things we all do all the time that make us less happy. I love the content and the pleasant way they talk about it.

I love this one too!

My Favorite Murder for the Mother F’ing Win. I had a baby recently and while this probably sounds INSANE, I listen to their podcast while breastfeeding and rocking him to sleep all. the. time. Karen and Georgia have become a constant in my daily routine, just one of the many things I love about podcasts. Moral of the story? Stay Sexy and Don’t Get Murdered.

STAY SEXY AND DON’T GET MURDERED! Damn right. My world has been flipped upside down since I found this podcast two weeks ago — I can’t do anything these days except listen to the podcast. I have started taking my dog on two hour walks because I just can’t get enough. And I’m already getting sad thinking about how it will be when I catch up and I’ll have to wait for a new episode each week. I wanna be BFF’s with Karen and Georgia. Also, I just bought a cross stitch that reads “SSDGM” on ETSY and I cannot wait for it to come in the mail.

this article put the biggest smile on my face! i seriously felt like you were talking to me bc that is totally something i would do!

The Spanx interview made me subscribe! I am also loving Love & Radio.

I love How I Built This – so good!

For me it’s The Moth for great story telling & Rich Roll for inspirational stories.

I love finding new podcasts thanks for sharing
xo
http://www.laurajaneatelier.com

I love podcasts so much, I subscribe to about a billion and listen daily while walking my dog. My current favorites are 2 Dope Queens (Phoebe and Jessica are hilarious and feature so many good comics), Bad with Money (Gaby Dunn is in her late 20s and is very open about her difficult relationship with money- something no one talks about. She’s really funny and self-deprecating and I appreciate her guests, for example last week’s episode was about how having a disability affects your finances.), Harry Potter and the Sacred Text (mentioned above), A Few Things (by the founders of Of a Kind- fun and lighthearted) and Big Magic with Elizabeth Gilbert (She helps people who are struggling with their creative pursuits and brings on some great guests.) I love hearing new suggestions as well. Thanks for sharing!

One of my favorites that hasn’t been mentioned yet, is You Must Remember This. Each episode is a different story about the first century of Old Hollywood. If you are classic movie fan, you will love the in depth stories she tells. She does such a great job with the research and flow of the stories. I was hooked on the Charles Manson series, it was soo interesing and well done.

this sounds so good!

I literally just heard about this podcast this morning and subscribed to it. I can’t wait to listen!

well, this is amazing. Thank you!

I am loving this podcast, makes me want to re-read all the books. I enjoy both hosts’ perspectives and the voicemails left by callers!

My friend in Houston just started a hilarious new podcast called Hands Off Parents. She and her bestie have a glass of wine, talk about parenting, while you can hear their children playing in the background. They cover many of the issues that Cup of Jo brings to the table. So insightful!

Amazing! I’ve actually listened to an episode here and there and it is fascinating. I’ve noticed that all of the successful “inventors” of our time had the confidence to follow through on their projects, and weren’t afraid to fail.

A few of my favorite podcasts: http://bit.ly/1L69ajD

Listened to the Spanx and Instagram episodes last week and loved both so much! I used to work at a startup and know firsthand how hard it is to succeed as an entrepreneur. I loved hearing the accounts straight from the source — way better than reading an article on the same subject! I think this is one I’ll continue listening to.

One podcast I really enjoyed was the Magic Lessons podcast by Elizabeth Gilbert. Super inspiring!